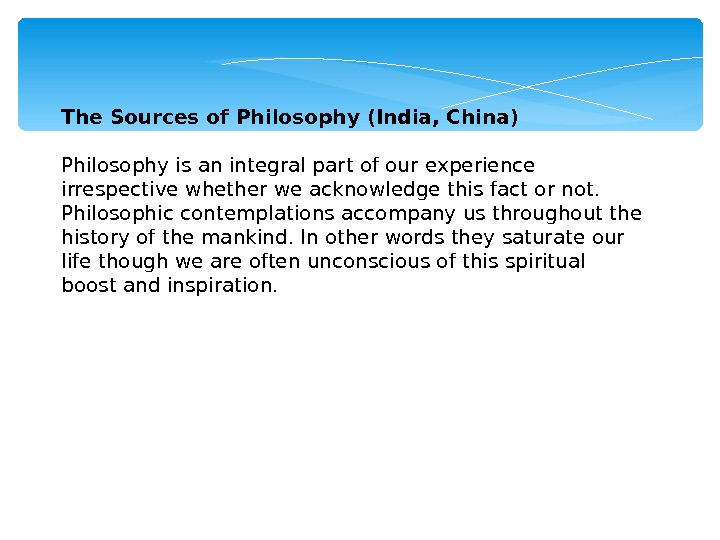 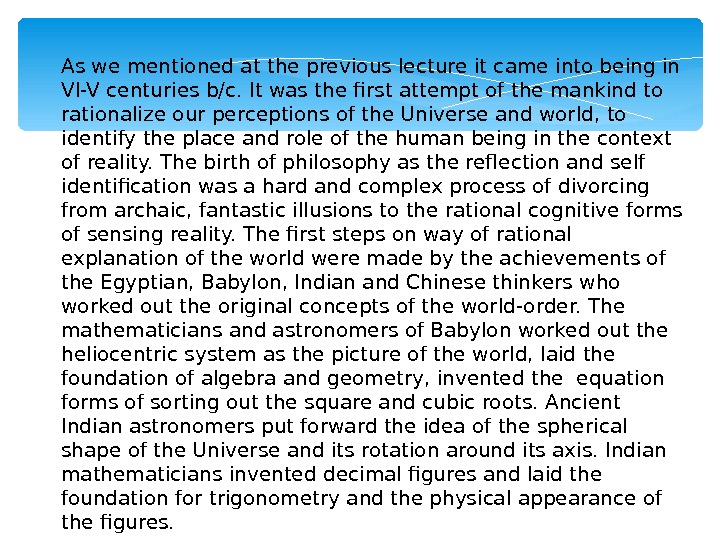 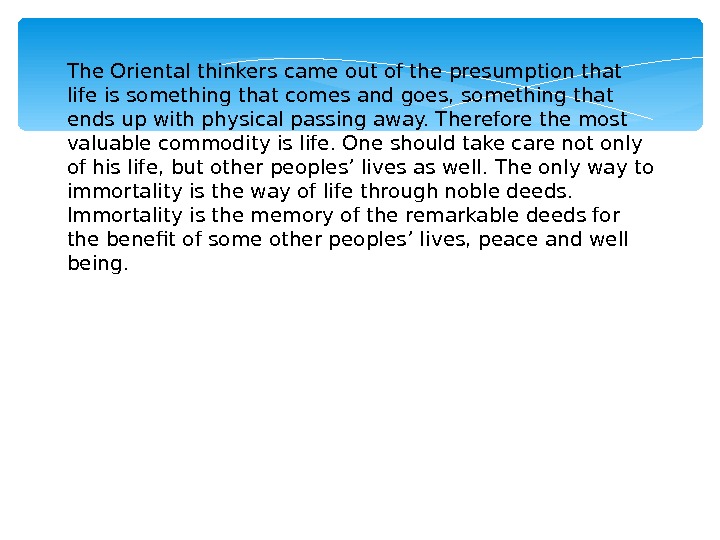 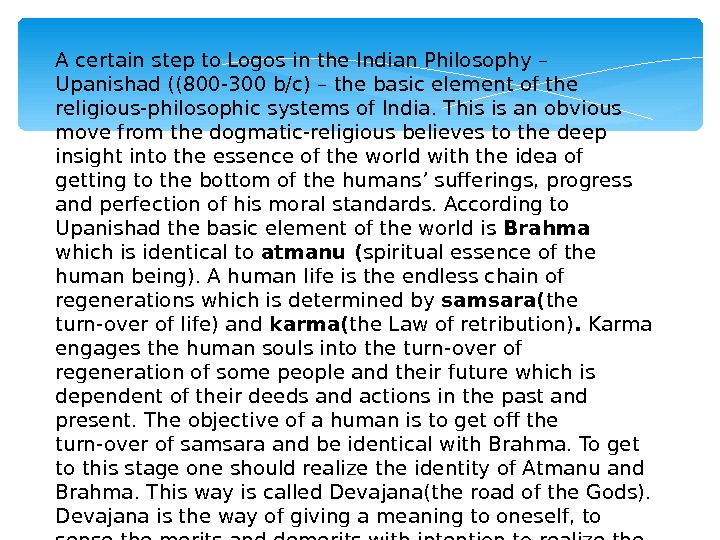 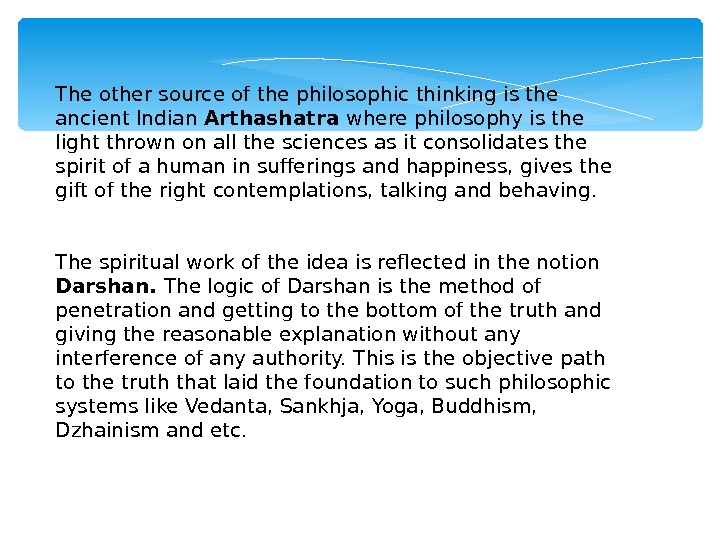 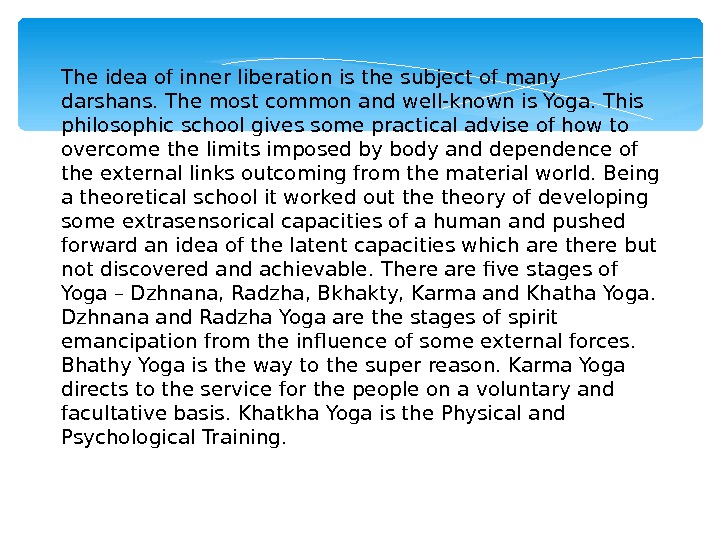 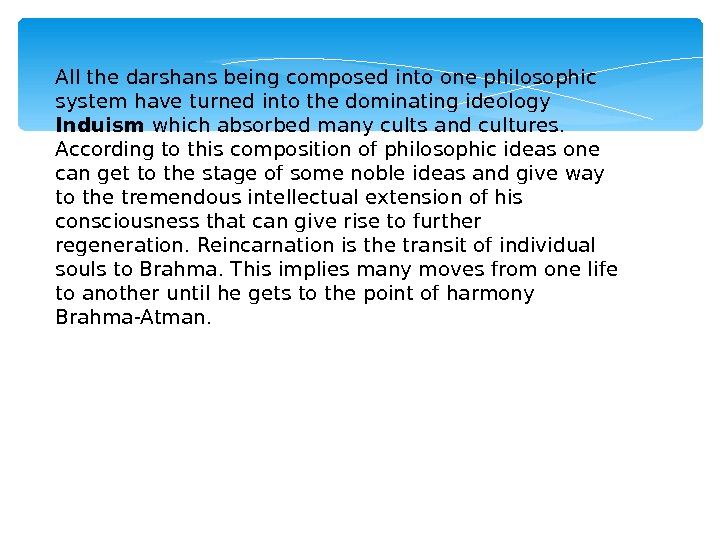 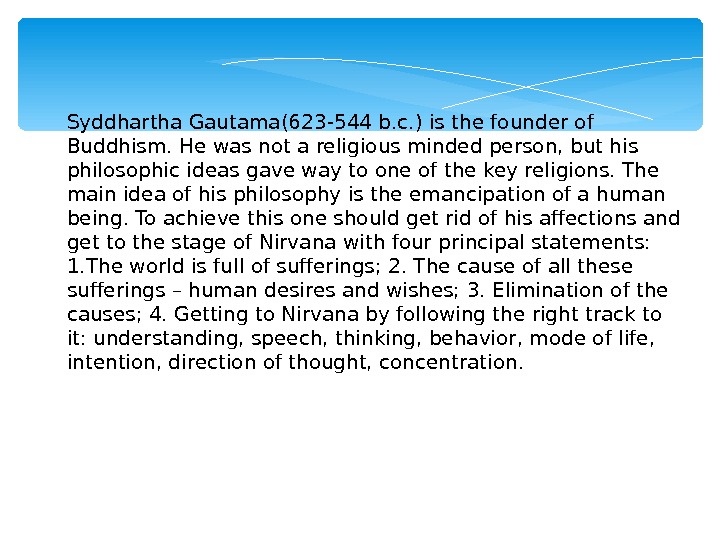 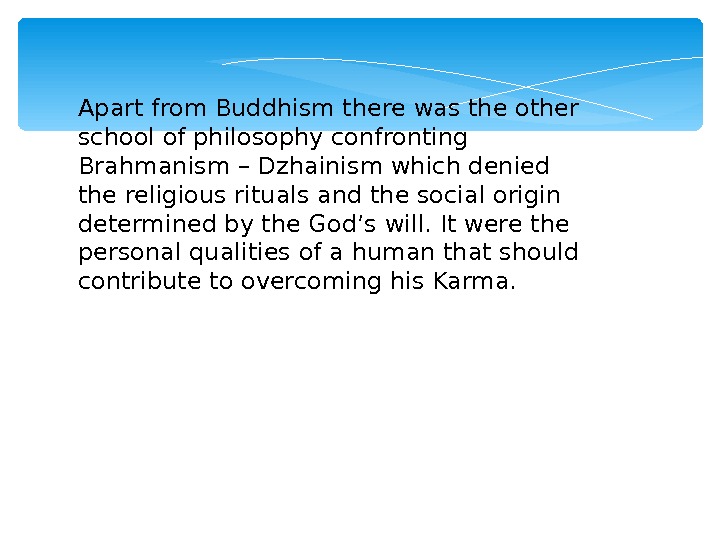 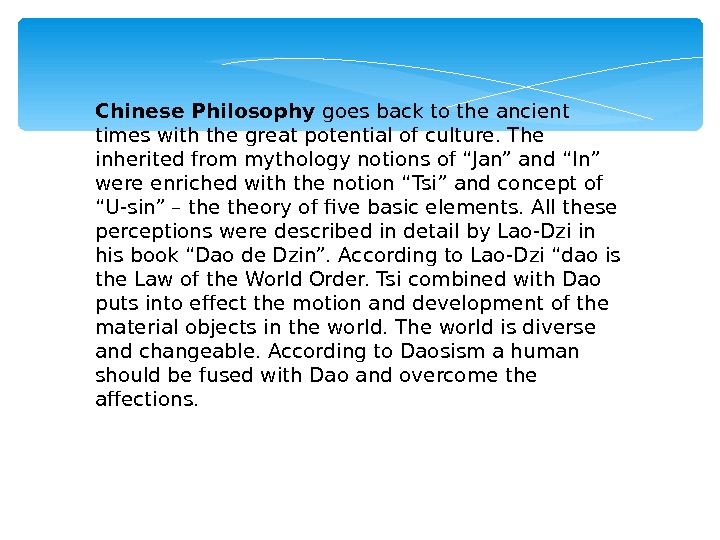 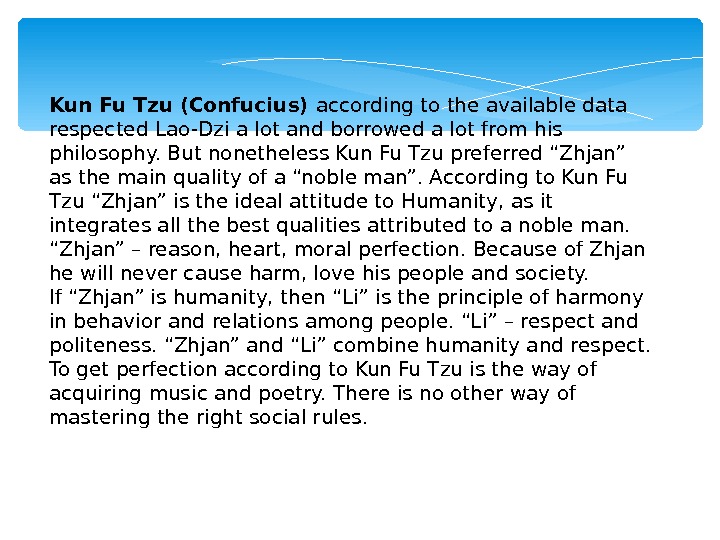 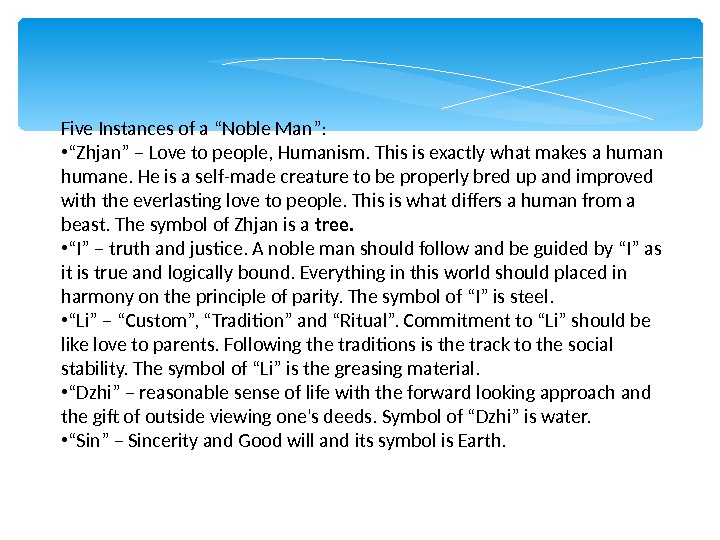 The Sources of Philosophy (India, China) Philosophy is an integral part of our experience irrespective whether we acknowledge this fact or not. Philosophic contemplations accompany us throughout the history of the mankind. In other words they saturate our life though we are often unconscious of this spiritual boost and inspiration.

As we mentioned at the previous lecture it came into being in VI-V centuries b/c. It was the first attempt of the mankind to rationalize our perceptions of the Universe and world, to identify the place and role of the human being in the context of reality. The birth of philosophy as the reflection and self identification was a hard and complex process of divorcing from archaic, fantastic illusions to the rational cognitive forms of sensing reality. The first steps on way of rational explanation of the world were made by the achievements of the Egyptian, Babylon, Indian and Chinese thinkers who worked out the original concepts of the world-order. The mathematicians and astronomers of Babylon worked out the heliocentric system as the picture of the world, laid the foundation of algebra and geometry, invented the equation forms of sorting out the square and cubic roots. Ancient Indian astronomers put forward the idea of the spherical shape of the Universe and its rotation around its axis. Indian mathematicians invented decimal figures and laid the foundation for trigonometry and the physical appearance of the figures.

Many ancient monuments of the Asian culture are devoted to the essence of the human being in the world, its role in it, death and immortality. As you might have noticed the difference of the approaches to the philosophic issues is enormous compared to the philosophic mode of the European thinkers who concentrated their attempts on the interrelation of the nature and a human being. As you remember their search of the essence was based on water, fire and other basic elements of the reality as the root of being and production of the subjective properties of the matter.

The Oriental thinkers came out of the presumption that life is something that comes and goes, something that ends up with physical passing away. Therefore the most valuable commodity is life. One should take care not only of his life, but other peoples’ lives as well. The only way to immortality is the way of life through noble deeds. Immortality is the memory of the remarkable deeds for the benefit of some other peoples’ lives, peace and well being.

A certain step to Logos in the Indian Philosophy – Upanishad ((800 -300 b/c) – the basic element of the religious-philosophic systems of India. This is an obvious move from the dogmatic-religious believes to the deep insight into the essence of the world with the idea of getting to the bottom of the humans’ sufferings, progress and perfection of his moral standards. According to Upanishad the basic element of the world is Brahma which is identical to atmanu ( spiritual essence of the human being). A human life is the endless chain of regenerations which is determined by samsara( the turn-over of life) and karma( the Law of retribution). Karma engages the human souls into the turn-over of regeneration of some people and their future which is dependent of their deeds and actions in the past and present. The objective of a human is to get off the turn-over of samsara and be identical with Brahma. To get to this stage one should realize the identity of Atmanu and Brahma. This way is called Devajana(the road of the Gods). Devajana is the way of giving a meaning to oneself, to sense the merits and demerits with intention to realize the relativity of the surrounding world. Devajana expects the acquisition of the inner world of a human with permanent sense of life.

The other source of the philosophic thinking is the ancient Indian Arthashatra where philosophy is the light thrown on all the sciences as it consolidates the spirit of a human in sufferings and happiness, gives the gift of the right contemplations, talking and behaving. The spiritual work of the idea is reflected in the notion Darshan. The logic of Darshan is the method of penetration and getting to the bottom of the truth and giving the reasonable explanation without any interference of any authority. This is the objective path to the truth that laid the foundation to such philosophic systems like Vedanta, Sankhja, Yoga, Buddhism, Dzhainism and etc.

Sankhja came into being in VII c. b. c. with Kapila as the founder. It got turned into the self-standing theory by the III century b. c. According to Sankhja the whole world is put into effect as the result of interactions of the two substances – Prakrity and Purushy. Prakrity is the changeable and dynamic energy and the source of different material objects. Purushy is the autonomous being of spirit, pure consciousness or “I”. Fusion of Prakrity and Purushy is the format of the World and the cause of evolution of the Universe. The existence of an everlasting world is the object of cognition. A human studies the world by means of the logical forms and reconfirms the truth through logistic devices based on strong arguments, proof and deduction. One of the great discoveries is the idea of self-cognition and plunging into the inner world. The idea of world’s subjectivity is complex as the reality that should be studied under the terms of inner liberty.

The idea of inner liberation is the subject of many darshans. The most common and well-known is Yoga. This philosophic school gives some practical advise of how to overcome the limits imposed by body and dependence of the external links outcoming from the material world. Being a theoretical school it worked out theory of developing some extrasensorical capacities of a human and pushed forward an idea of the latent capacities which are there but not discovered and achievable. There are five stages of Yoga – Dzhnana, Radzha, Bkhakty, Karma and Khatha Yoga. Dzhnana and Radzha Yoga are the stages of spirit emancipation from the influence of some external forces. Bhathy Yoga is the way to the super reason. Karma Yoga directs to the service for the people on a voluntary and facultative basis. Khatkha Yoga is the Physical and Psychological Training.

All the darshans being composed into one philosophic system have turned into the dominating ideology Induism which absorbed many cults and cultures. According to this composition of philosophic ideas one can get to the stage of some noble ideas and give way to the tremendous intellectual extension of his consciousness that can give rise to further regeneration. Reincarnation is the transit of individual souls to Brahma. This implies many moves from one life to another until he gets to the point of harmony Brahma-Atman.

Syddhartha Gautama(623 -544 b. c. ) is the founder of Buddhism. He was not a religious minded person, but his philosophic ideas gave way to one of the key religions. The main idea of his philosophy is the emancipation of a human being. To achieve this one should get rid of his affections and get to the stage of Nirvana with four principal statements: 1. The world is full of sufferings; 2. The cause of all these sufferings – human desires and wishes; 3. Elimination of the causes; 4. Getting to Nirvana by following the right track to it: understanding, speech, thinking, behavior, mode of life, intention, direction of thought, concentration.

Apart from Buddhism there was the other school of philosophy confronting Brahmanism – Dzhainism which denied the religious rituals and the social origin determined by the God’s will. It were the personal qualities of a human that should contribute to overcoming his Karma.

Chinese Philosophy goes back to the ancient times with the great potential of culture. The inherited from mythology notions of “Jan” and “In” were enriched with the notion “Tsi” and concept of “U-sin” – theory of five basic elements. All these perceptions were described in detail by Lao-Dzi in his book “Dao de Dzin”. According to Lao-Dzi “dao is the Law of the World Order. Tsi combined with Dao puts into effect the motion and development of the material objects in the world. The world is diverse and changeable. According to Daosism a human should be fused with Dao and overcome the affections.

Kun Fu Tzu (Confucius) according to the available data respected Lao-Dzi a lot and borrowed a lot from his philosophy. But nonetheless Kun Fu Tzu preferred “Zhjan” as the main quality of a “noble man”. According to Kun Fu Tzu “Zhjan” is the ideal attitude to Humanity, as it integrates all the best qualities attributed to a noble man. “Zhjan” – reason, heart, moral perfection. Because of Zhjan he will never cause harm, love his people and society. If “Zhjan” is humanity, then “Li” is the principle of harmony in behavior and relations among people. “Li” – respect and politeness. “Zhjan” and “Li” combine humanity and respect. To get perfection according to Kun Fu Tzu is the way of acquiring music and poetry. There is no other way of mastering the right social rules.

Five Instances of a “Noble Man”: • “ Zhjan” – Love to people, Humanism. This is exactly what makes a humane. He is a self-made creature to be properly bred up and improved with the everlasting love to people. This is what differs a human from a beast. The symbol of Zhjan is a tree. • “ I” – truth and justice. A noble man should follow and be guided by “I” as it is true and logically bound. Everything in this world should placed in harmony on the principle of parity. The symbol of “I” is steel. • “ Li” – “Custom”, “Tradition” and “Ritual”. Commitment to “Li” should be like love to parents. Following the traditions is the track to the social stability. The symbol of “Li” is the greasing material. • “ Dzhi” – reasonable sense of life with the forward looking approach and the gift of outside viewing one’s deeds. Symbol of “Dzhi” is water. • “ Sin” – Sincerity and Good will and its symbol is Earth.