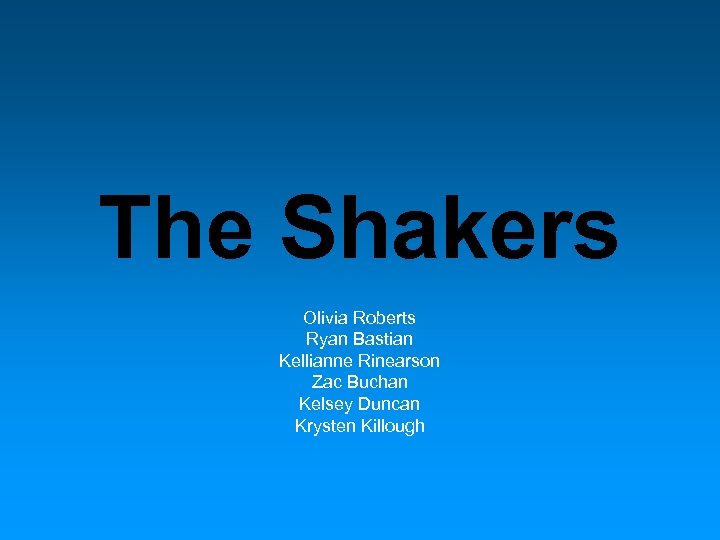 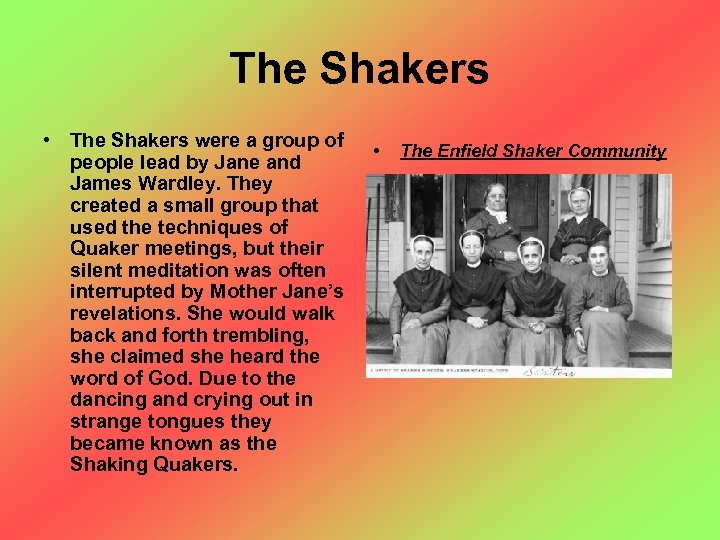 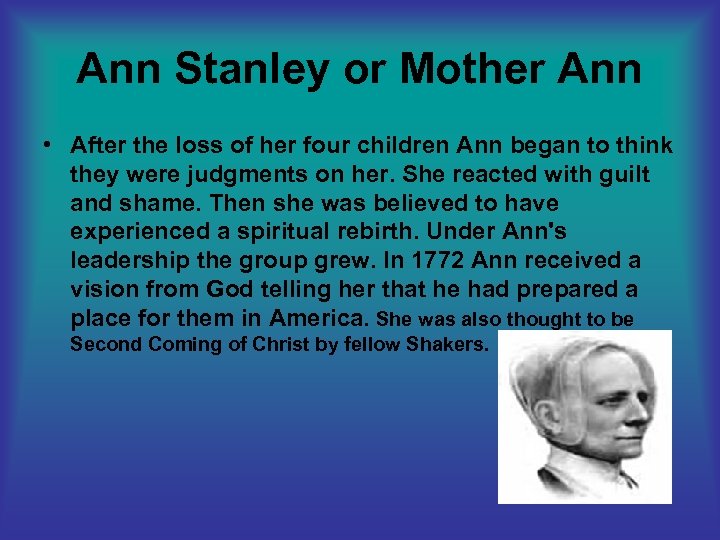 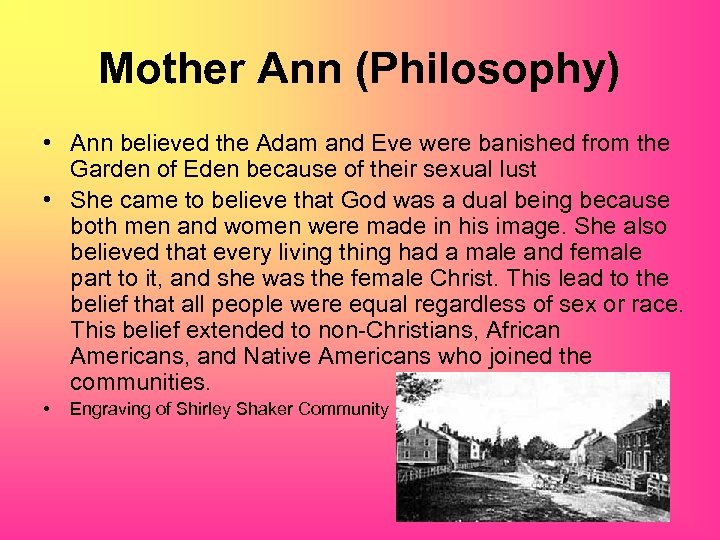 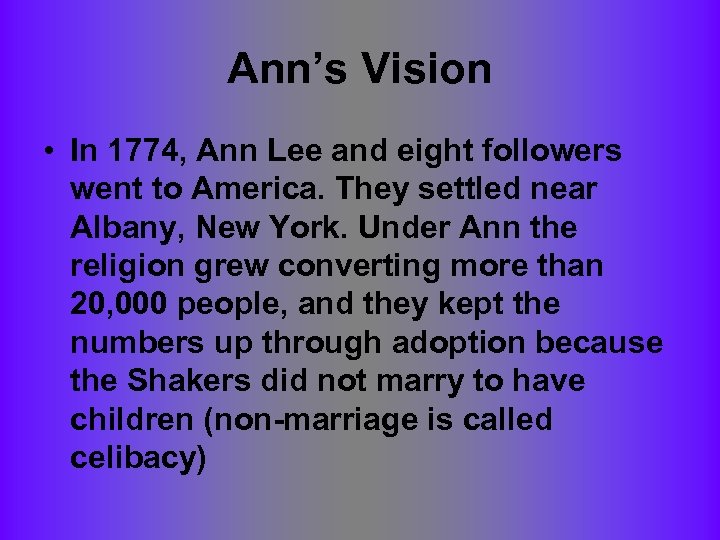 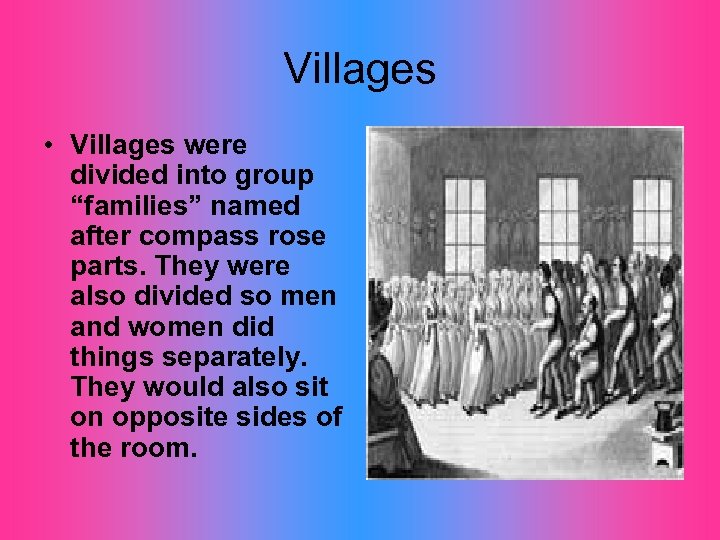 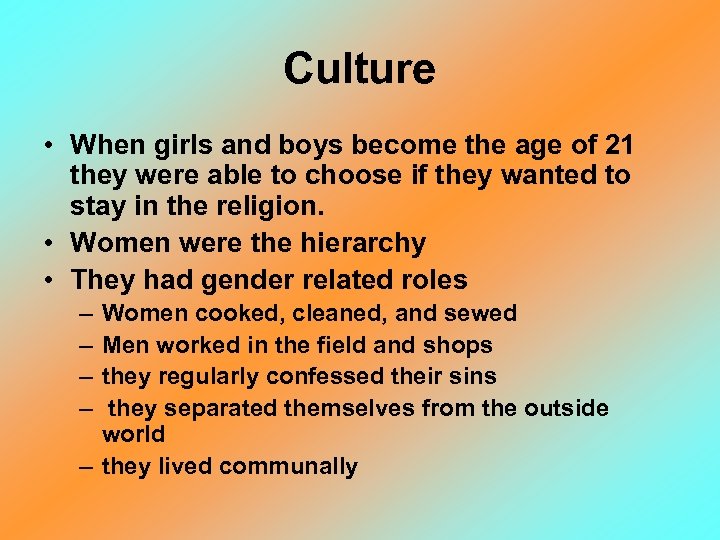 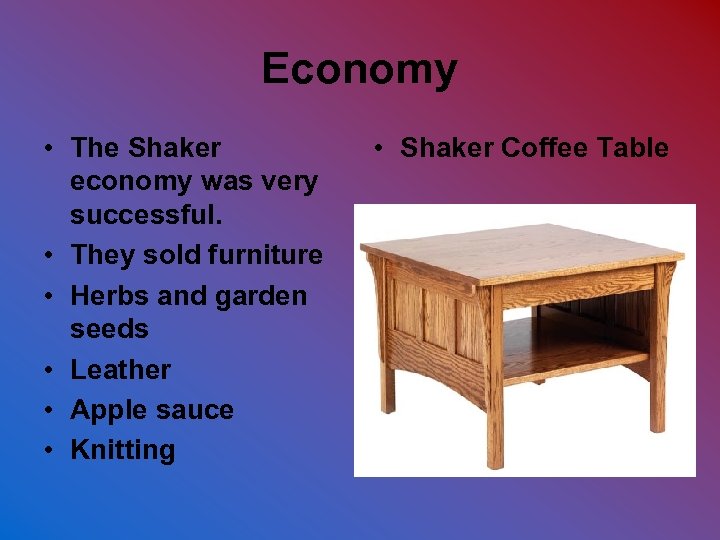 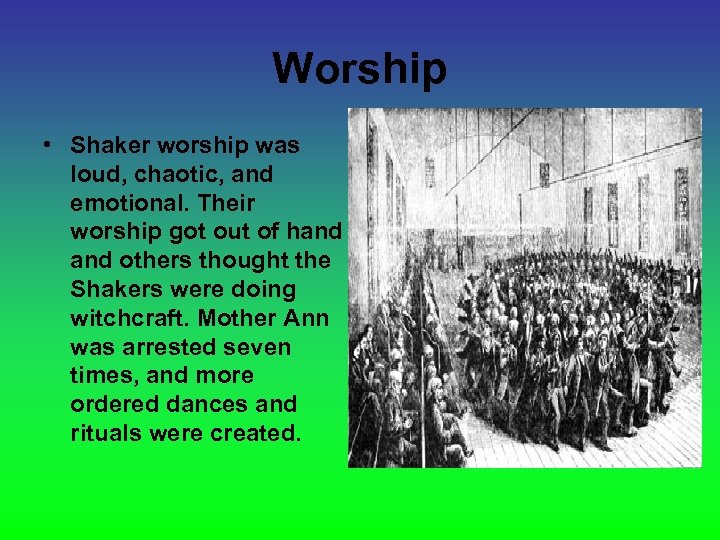 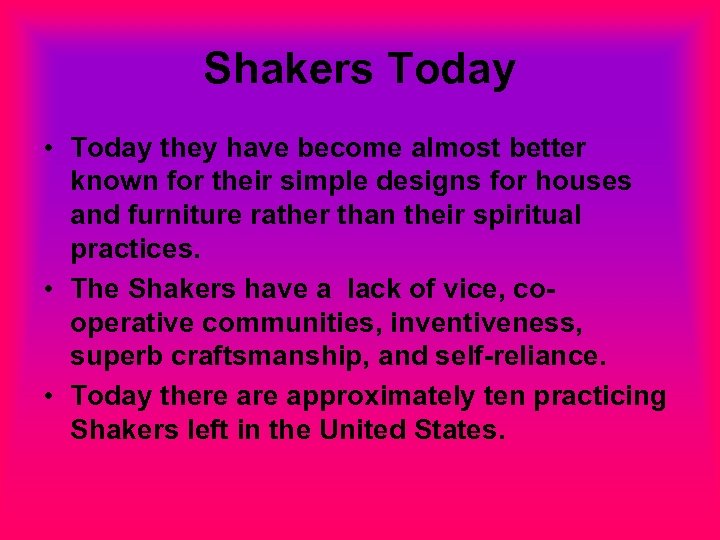 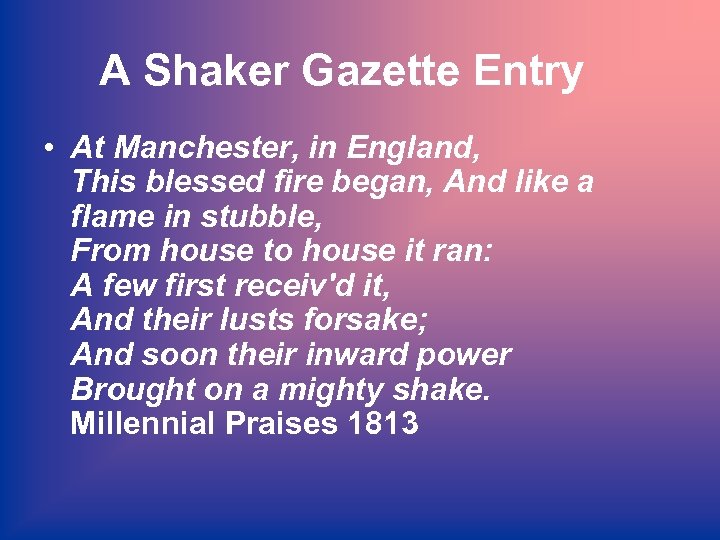 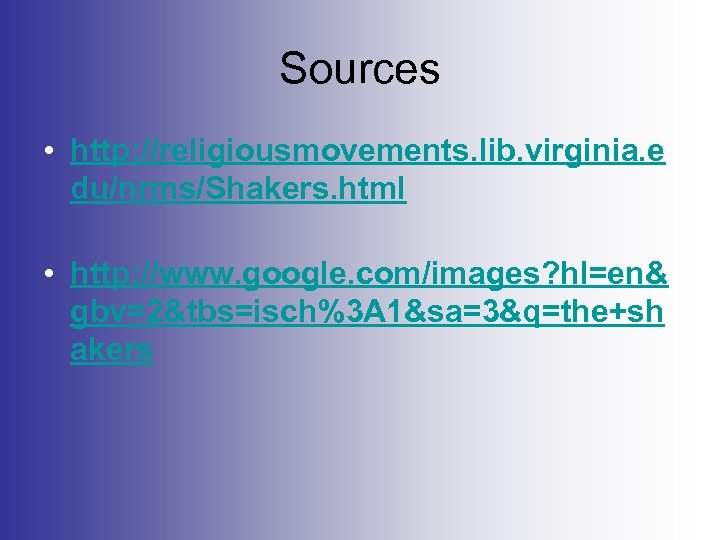 The Shakers • The Shakers were a group of people lead by Jane and James Wardley. They created a small group that used the techniques of Quaker meetings, but their silent meditation was often interrupted by Mother Jane’s revelations. She would walk back and forth trembling, she claimed she heard the word of God. Due to the dancing and crying out in strange tongues they became known as the Shaking Quakers. • The Enfield Shaker Community

Ann Stanley or Mother Ann • After the loss of her four children Ann began to think they were judgments on her. She reacted with guilt and shame. Then she was believed to have experienced a spiritual rebirth. Under Ann's leadership the group grew. In 1772 Ann received a vision from God telling her that he had prepared a place for them in America. She was also thought to be Second Coming of Christ by fellow Shakers.

Mother Ann (Philosophy) • Ann believed the Adam and Eve were banished from the Garden of Eden because of their sexual lust • She came to believe that God was a dual being because both men and women were made in his image. She also believed that every living thing had a male and female part to it, and she was the female Christ. This lead to the belief that all people were equal regardless of sex or race. This belief extended to non-Christians, African Americans, and Native Americans who joined the communities. • Engraving of Shirley Shaker Community

Ann’s Vision • In 1774, Ann Lee and eight followers went to America. They settled near Albany, New York. Under Ann the religion grew converting more than 20, 000 people, and they kept the numbers up through adoption because the Shakers did not marry to have children (non-marriage is called celibacy)

Villages • Villages were divided into group “families” named after compass rose parts. They were also divided so men and women did things separately. They would also sit on opposite sides of the room.

Culture • When girls and boys become the age of 21 they were able to choose if they wanted to stay in the religion. • Women were the hierarchy • They had gender related roles – – Women cooked, cleaned, and sewed Men worked in the field and shops they regularly confessed their sins they separated themselves from the outside world – they lived communally

Worship • Shaker worship was loud, chaotic, and emotional. Their worship got out of hand others thought the Shakers were doing witchcraft. Mother Ann was arrested seven times, and more ordered dances and rituals were created.

Shakers Today • Today they have become almost better known for their simple designs for houses and furniture rather than their spiritual practices. • The Shakers have a lack of vice, cooperative communities, inventiveness, superb craftsmanship, and self-reliance. • Today there approximately ten practicing Shakers left in the United States.

A Shaker Gazette Entry • At Manchester, in England, This blessed fire began, And like a flame in stubble, From house to house it ran: A few first receiv'd it, And their lusts forsake; And soon their inward power Brought on a mighty shake. Millennial Praises 1813