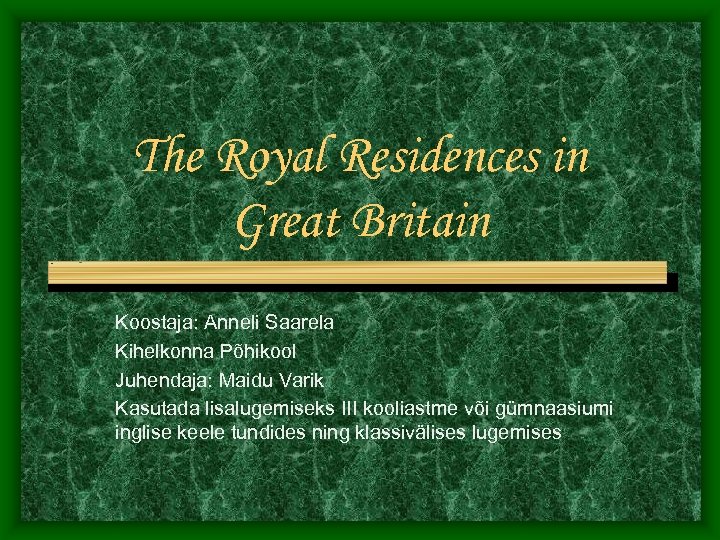 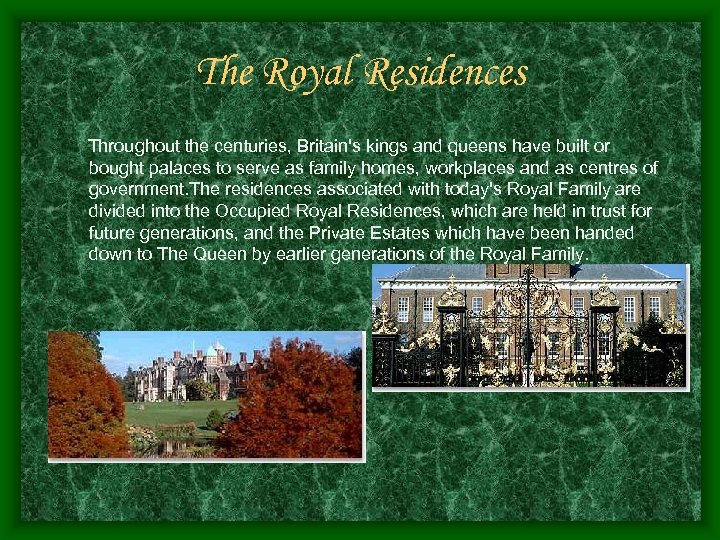 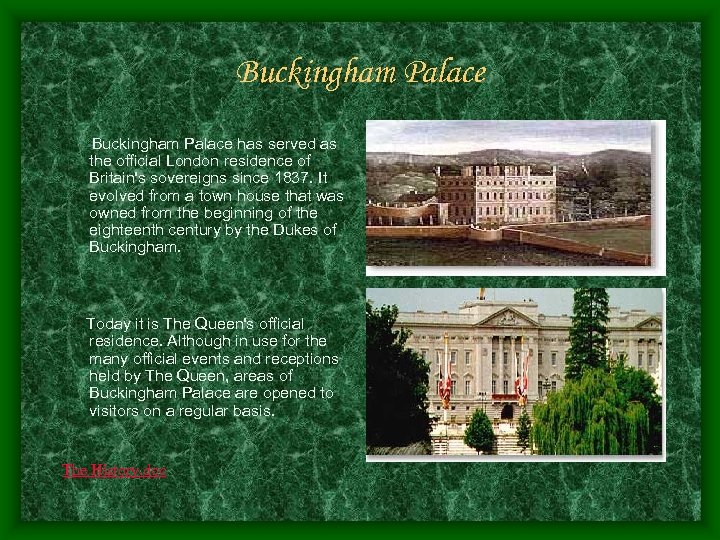 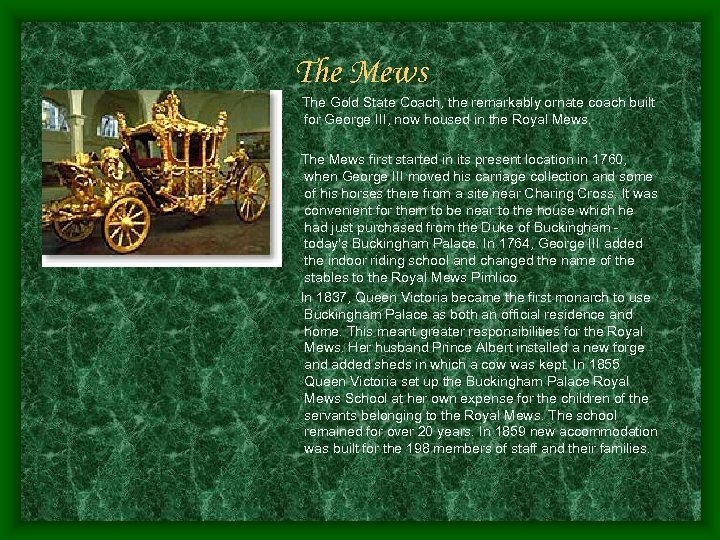 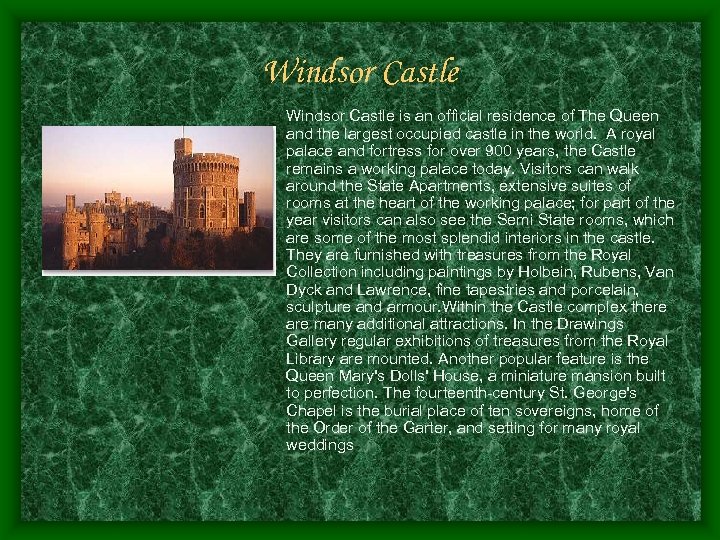 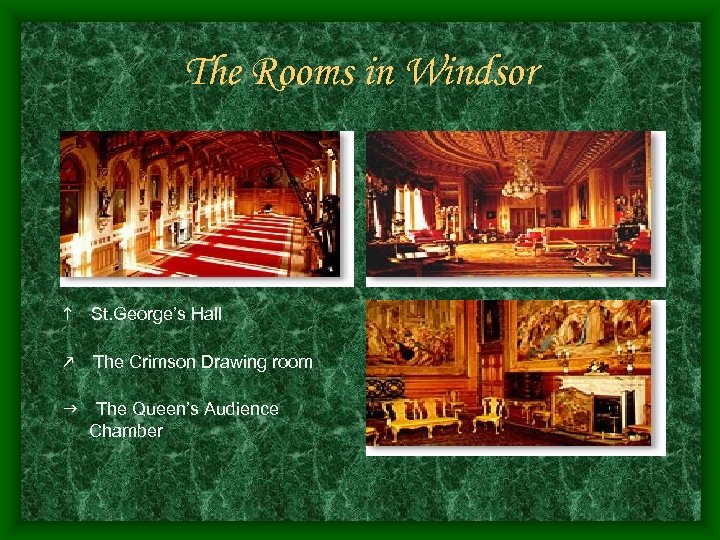 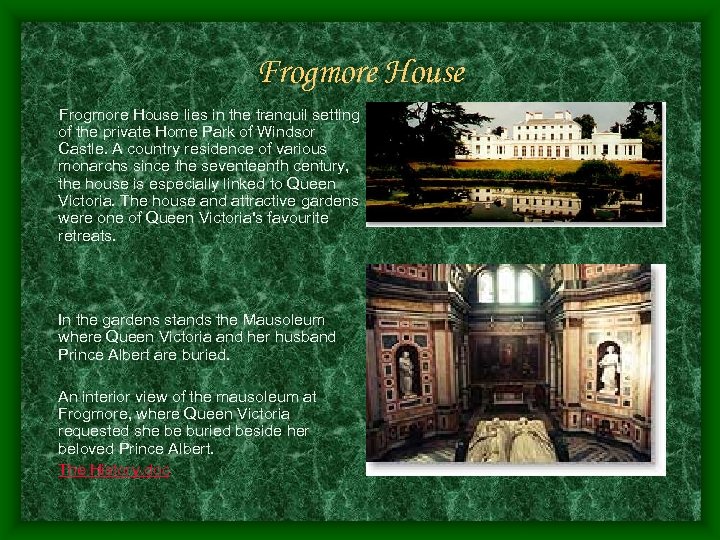 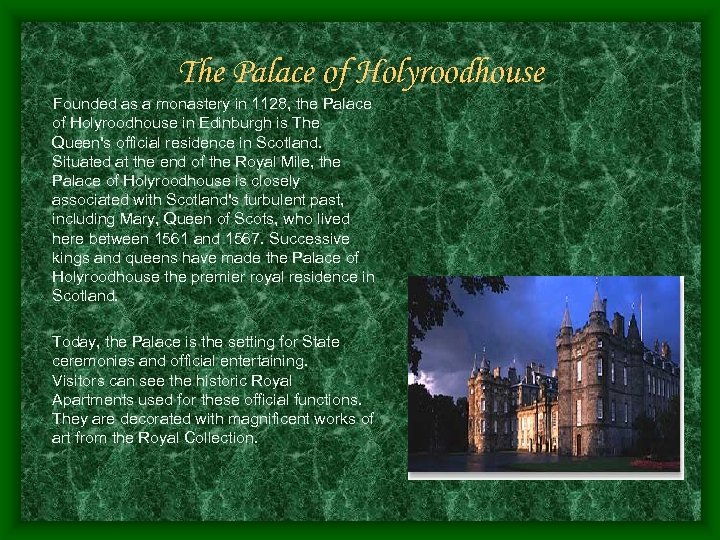 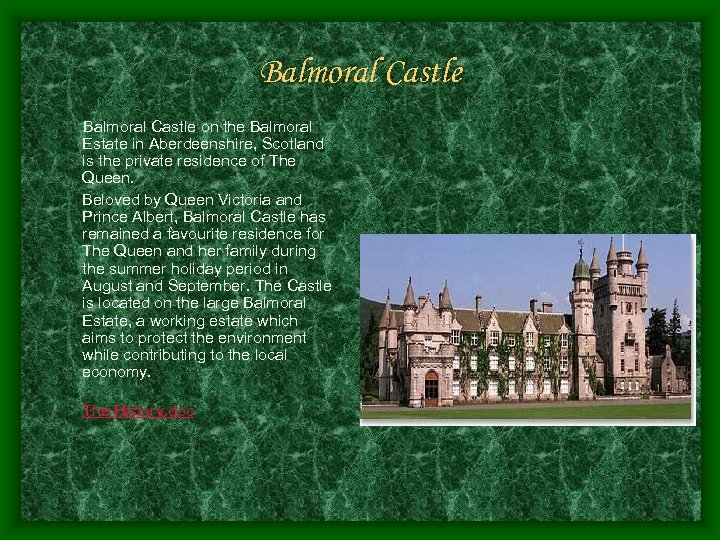 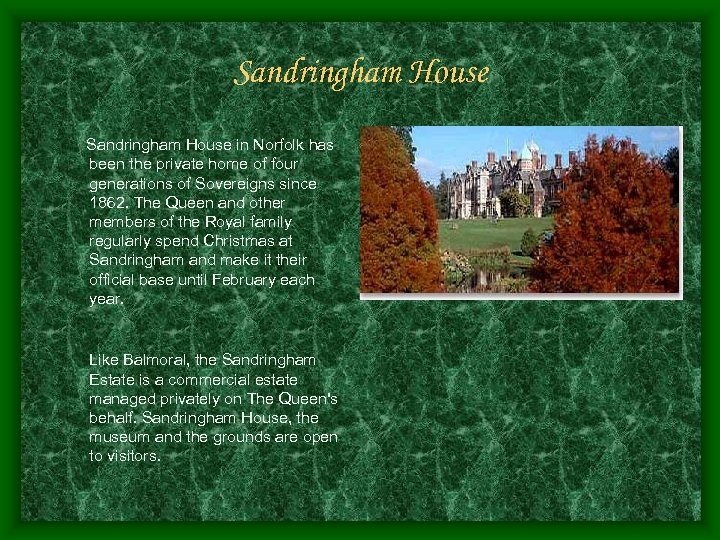 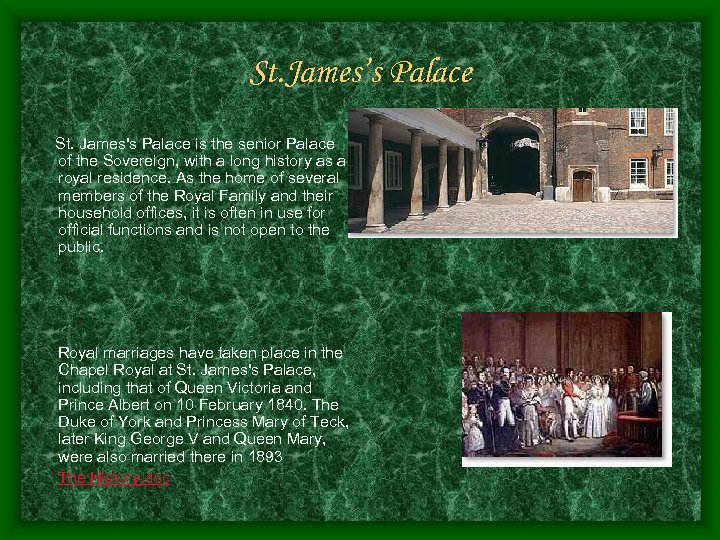 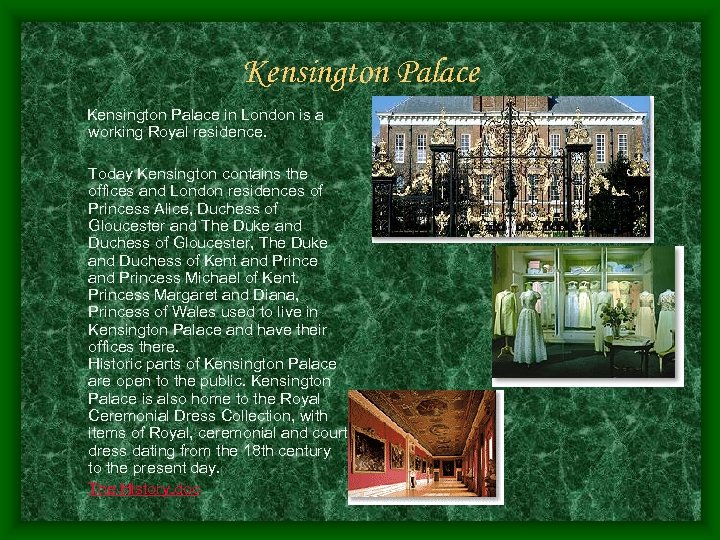 The Royal Residences Throughout the centuries, Britain's kings and queens have built or bought palaces to serve as family homes, workplaces and as centres of government. The residences associated with today's Royal Family are divided into the Occupied Royal Residences, which are held in trust for future generations, and the Private Estates which have been handed down to The Queen by earlier generations of the Royal Family.

Buckingham Palace has served as the official London residence of Britain's sovereigns since 1837. It evolved from a town house that was owned from the beginning of the eighteenth century by the Dukes of Buckingham. Today it is The Queen's official residence. Although in use for the many official events and receptions held by The Queen, areas of Buckingham Palace are opened to visitors on a regular basis. The History. doc

The Mews The Gold State Coach, the remarkably ornate coach built for George III, now housed in the Royal Mews. The Mews first started in its present location in 1760, when George III moved his carriage collection and some of his horses there from a site near Charing Cross. It was convenient for them to be near to the house which he had just purchased from the Duke of Buckingham - today's Buckingham Palace. In 1764, George III added the indoor riding school and changed the name of the stables to the Royal Mews Pimlico. In 1837, Queen Victoria became the first monarch to use Buckingham Palace as both an official residence and home. This meant greater responsibilities for the Royal Mews. Her husband Prince Albert installed a new forge and added sheds in which a cow was kept. In 1855 Queen Victoria set up the Buckingham Palace Royal Mews School at her own expense for the children of the servants belonging to the Royal Mews. The school remained for over 20 years. In 1859 new accommodation was built for the 198 members of staff and their families.

Windsor Castle is an official residence of The Queen and the largest occupied castle in the world. A royal palace and fortress for over 900 years, the Castle remains a working palace today. Visitors can walk around the State Apartments, extensive suites of rooms at the heart of the working palace; for part of the year visitors can also see the Semi State rooms, which are some of the most splendid interiors in the castle. They are furnished with treasures from the Royal Collection including paintings by Holbein, Rubens, Van Dyck and Lawrence, fine tapestries and porcelain, sculpture and armour. Within the Castle complex there are many additional attractions. In the Drawings Gallery regular exhibitions of treasures from the Royal Library are mounted. Another popular feature is the Queen Mary's Dolls' House, a miniature mansion built to perfection. The fourteenth-century St. George's Chapel is the burial place of ten sovereigns, home of the Order of the Garter, and setting for many royal weddings

Frogmore House lies in the tranquil setting of the private Home Park of Windsor Castle. A country residence of various monarchs since the seventeenth century, the house is especially linked to Queen Victoria. The house and attractive gardens were one of Queen Victoria's favourite retreats. In the gardens stands the Mausoleum where Queen Victoria and her husband Prince Albert are buried. An interior view of the mausoleum at Frogmore, where Queen Victoria requested she be buried beside her beloved Prince Albert. The History. doc

Balmoral Castle on the Balmoral Estate in Aberdeenshire, Scotland is the private residence of The Queen. Beloved by Queen Victoria and Prince Albert, Balmoral Castle has remained a favourite residence for The Queen and her family during the summer holiday period in August and September. The Castle is located on the large Balmoral Estate, a working estate which aims to protect the environment while contributing to the local economy. The History. doc

Sandringham House in Norfolk has been the private home of four generations of Sovereigns since 1862. The Queen and other members of the Royal family regularly spend Christmas at Sandringham and make it their official base until February each year. Like Balmoral, the Sandringham Estate is a commercial estate managed privately on The Queen's behalf. Sandringham House, the museum and the grounds are open to visitors.

St. James’s Palace St. James's Palace is the senior Palace of the Sovereign, with a long history as a royal residence. As the home of several members of the Royal Family and their household offices, it is often in use for official functions and is not open to the public. Royal marriages have taken place in the Chapel Royal at St. James's Palace, including that of Queen Victoria and Prince Albert on 10 February 1840. The Duke of York and Princess Mary of Teck, later King George V and Queen Mary, were also married there in 1893 The History. doc

THE ISLANDS OF GREAT BRITAIN, IRELAND, THE HEBRIDES,