The role of the research service in the 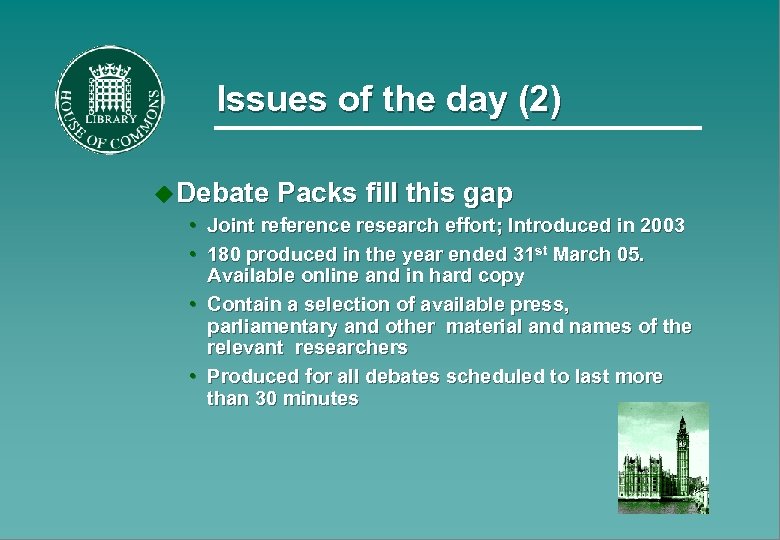 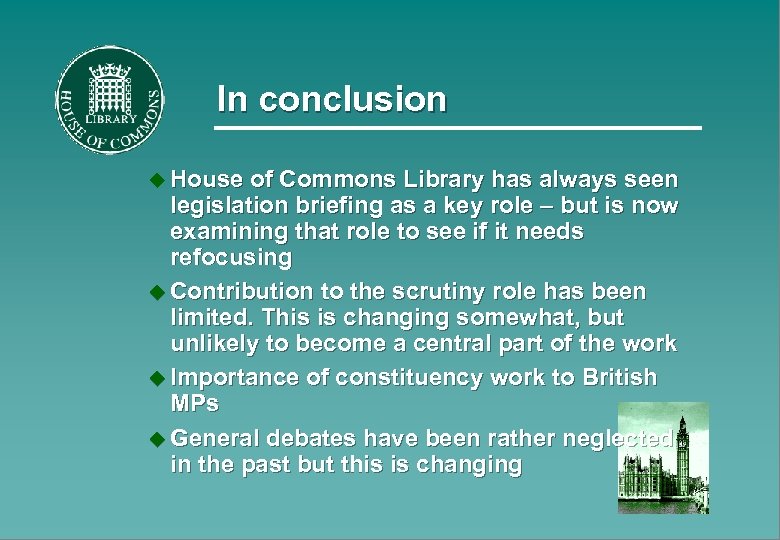 Скачать презентацию The role of the research service in the

Some facts about the Library u One of the six departments of the House of Commons administration u 210 staff u 76 staff in research service including 41 researchers and 13 Librarians u 8 research sections u There is a separate, much smaller Library in the House of Lords

Some research service outputs In year ended 31 st March 2005: u 11, 000 ‘logged’ enquiries u 18, 000 ‘unlogged’ (quick) enquiries u 94 research papers u 2, 200 ‘standard notes’ online on 31 st March (compared to fewer than 800 three years earlier) u Contributions to 180 debate packs u Substantial amount of work for opposition spokespeople

The work of the research service…. …Looked at in relation to parliamentary functions u Legislation u Scrutiny of the executive u Representation u Debating issues of the day

Legislation (2) u Growth of ‘draft’ bills (ie legislative proposals presented in advance of a formal bill) • These may be covered by a Standard Note but lack of systematic way of covering them u Current challenge: are we concentrating our effort in the right place? Are we doing enough on the post 2 nd reading stages of legislation? And what about post-implementation? u A Library working group has been set up to look at these issues

Scrutiny of the executive u Has not been a key area of the Library’s work, but this is changing • We have always done some work for select committees, usually as part of the enquiry load. But the amount has been limited • Review of support for committees three years ago led to increased staffing to enable more support for committees. Five researchers currently attached to individual committees • Hope to move towards more flexible arrangements u Some work supporting Parliamentary Questions etc

Representation u Role as a constituency MP is particularly important in the UK House of Commons u Work arising from this is an important aspect of enquiry work in some sections, but use of Library for this by Members is very variable u Often ‘answerer of last resort’

Issues of the day (1) u Some research papers have always been on important current issues u Standard notes cover topical issues as do many answers to individual enquiries u But there was a gap: we had no routinely produced briefings on nonlegislative debates

Issues of the day (2) u Debate Packs fill this gap • Joint reference research effort; Introduced in 2003 • 180 produced in the year ended 31 st March 05. • • Available online and in hard copy Contain a selection of available press, parliamentary and other material and names of the relevant researchers Produced for all debates scheduled to last more than 30 minutes

In conclusion u House of Commons Library has always seen legislation briefing as a key role – but is now examining that role to see if it needs refocusing u Contribution to the scrutiny role has been limited. This is changing somewhat, but unlikely to become a central part of the work u Importance of constituency work to British MPs u General debates have been rather neglected in the past but this is changing