The Rise of Substantive Due Process n Dred 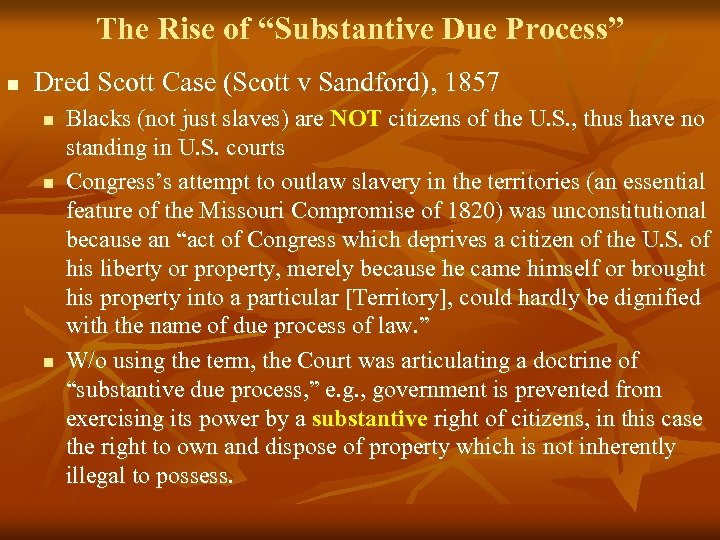 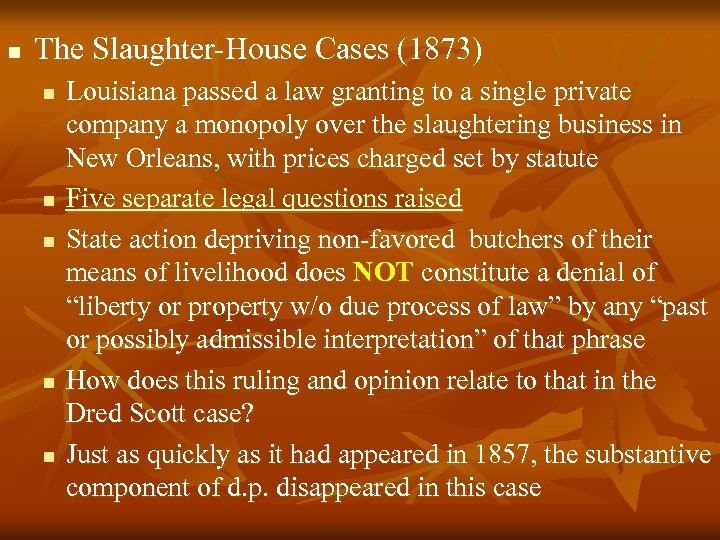 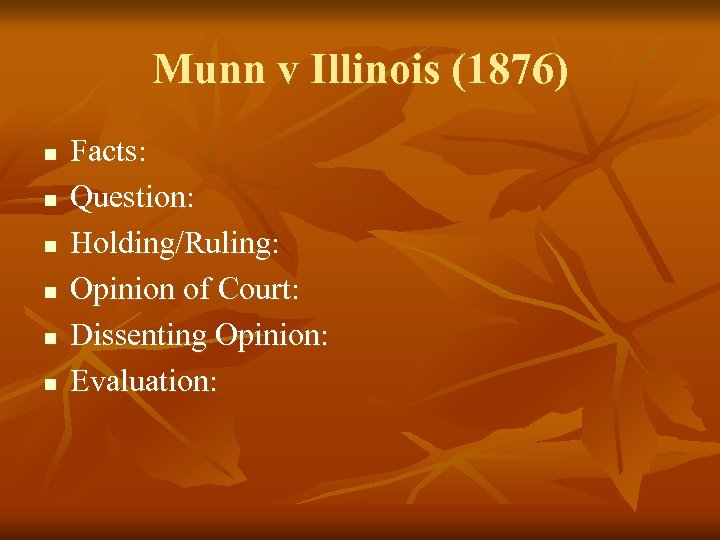 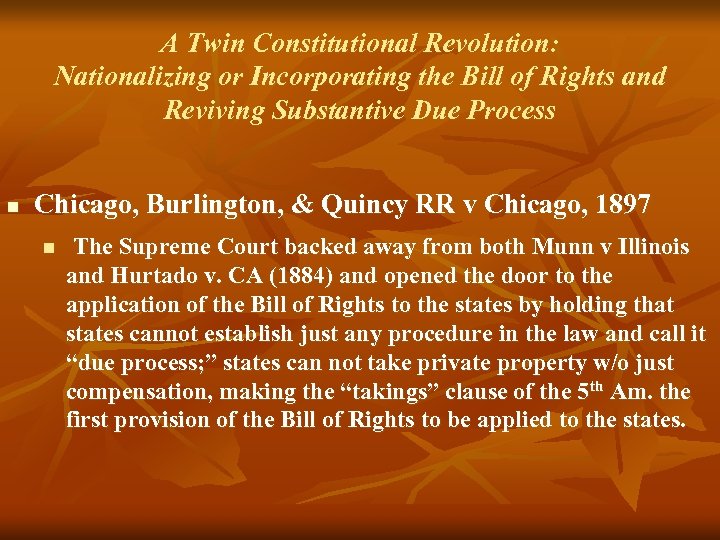 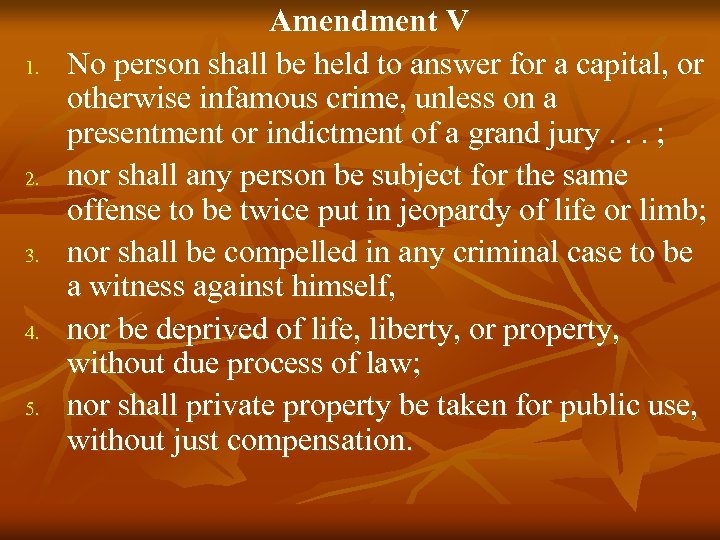 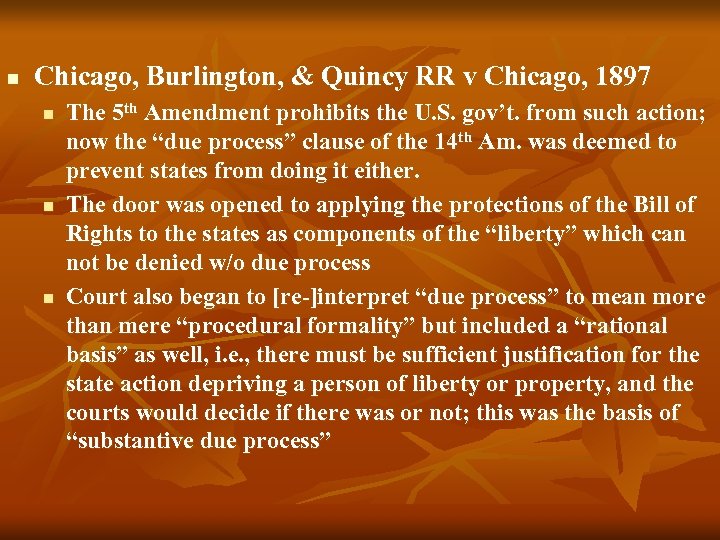 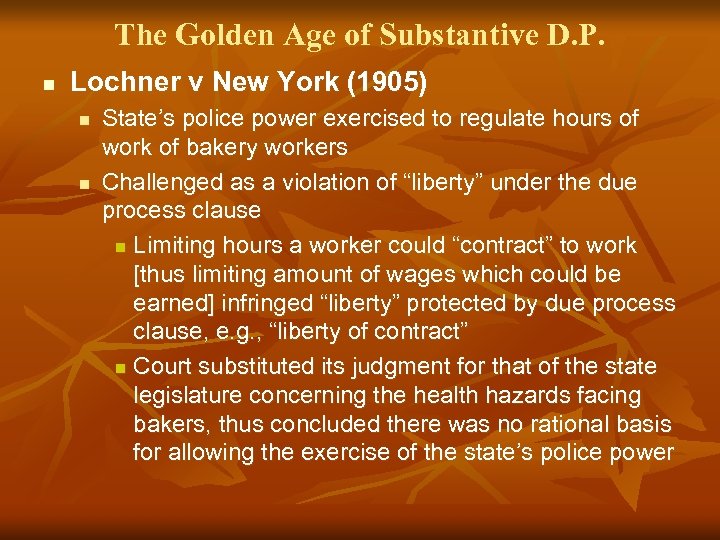 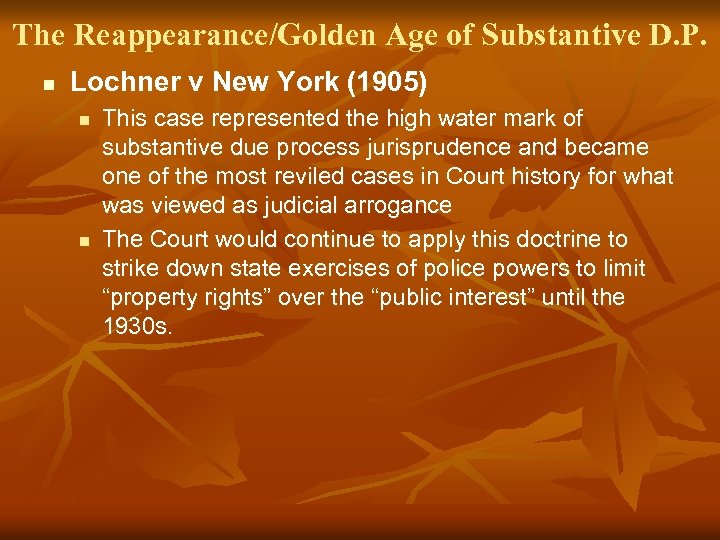 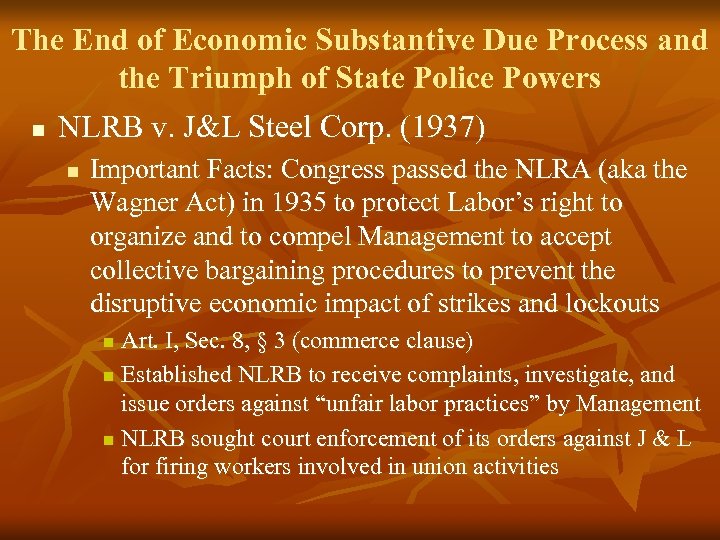 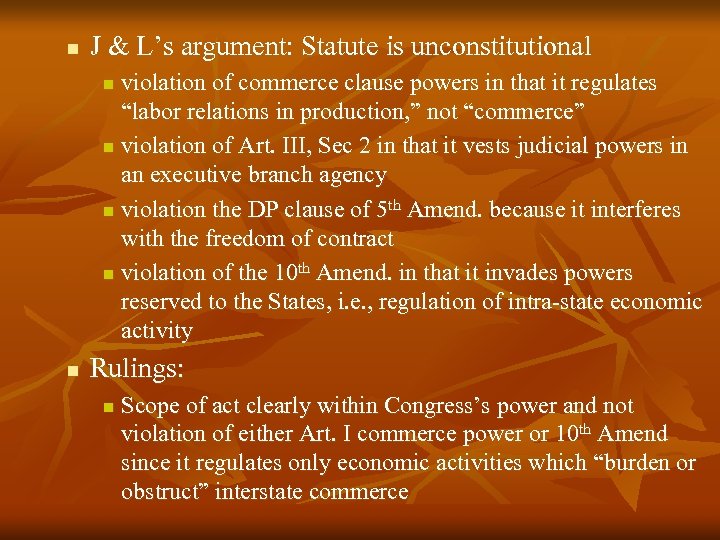 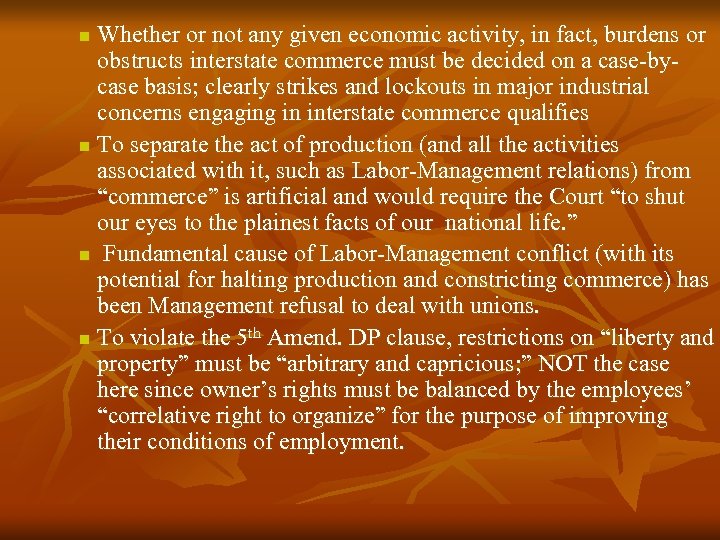 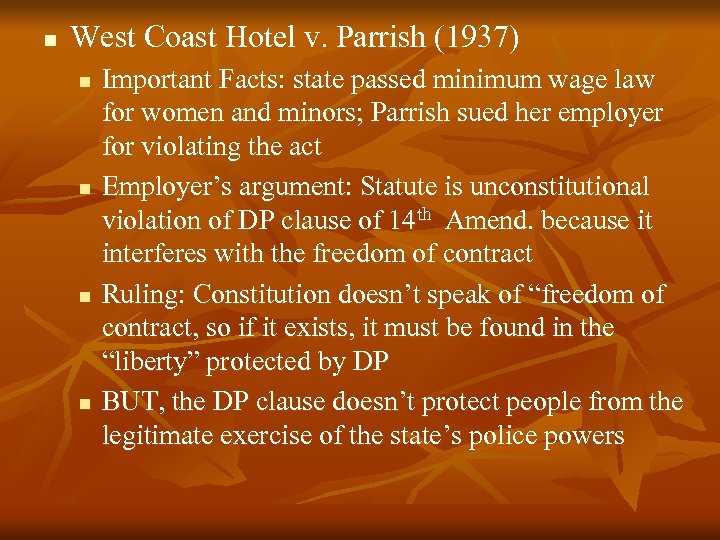 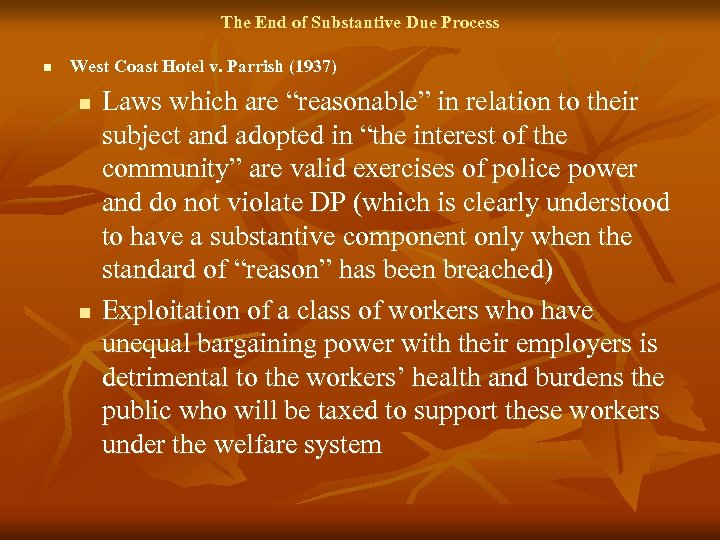 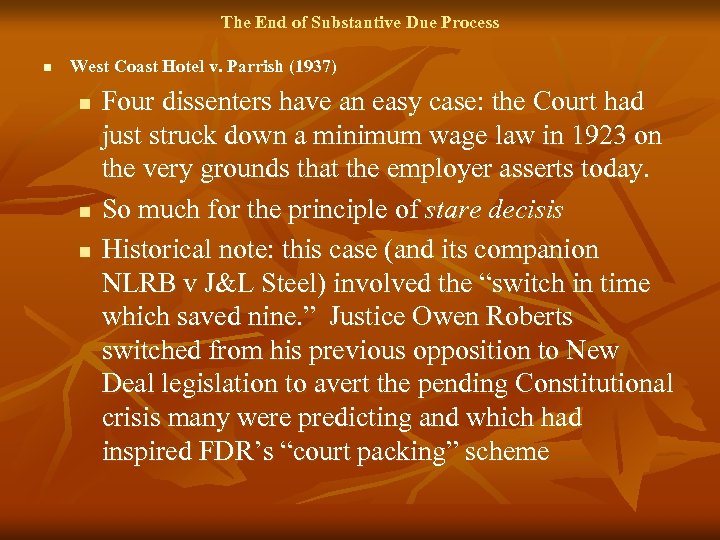 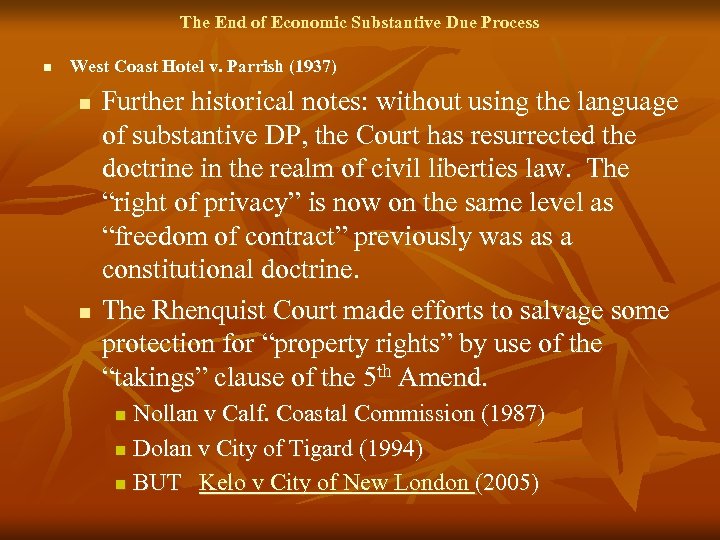 Скачать презентацию The Rise of Substantive Due Process n Dred

The Rise of “Substantive Due Process” n Dred Scott Case (Scott v Sandford), 1857 n n n Blacks (not just slaves) are NOT citizens of the U. S. , thus have no standing in U. S. courts Congress’s attempt to outlaw slavery in the territories (an essential feature of the Missouri Compromise of 1820) was unconstitutional because an “act of Congress which deprives a citizen of the U. S. of his liberty or property, merely because he came himself or brought his property into a particular [Territory], could hardly be dignified with the name of due process of law. ” W/o using the term, the Court was articulating a doctrine of “substantive due process, ” e. g. , government is prevented from exercising its power by a substantive right of citizens, in this case the right to own and dispose of property which is not inherently illegal to possess.

n The Slaughter-House Cases (1873) n n n Louisiana passed a law granting to a single private company a monopoly over the slaughtering business in New Orleans, with prices charged set by statute Five separate legal questions raised State action depriving non-favored butchers of their means of livelihood does NOT constitute a denial of “liberty or property w/o due process of law” by any “past or possibly admissible interpretation” of that phrase How does this ruling and opinion relate to that in the Dred Scott case? Just as quickly as it had appeared in 1857, the substantive component of d. p. disappeared in this case

A Twin Constitutional Revolution: Nationalizing or Incorporating the Bill of Rights and Reviving Substantive Due Process n Chicago, Burlington, & Quincy RR v Chicago, 1897 n The Supreme Court backed away from both Munn v Illinois and Hurtado v. CA (1884) and opened the door to the application of the Bill of Rights to the states by holding that states cannot establish just any procedure in the law and call it “due process; ” states can not take private property w/o just compensation, making the “takings” clause of the 5 th Am. the first provision of the Bill of Rights to be applied to the states.

1. 2. 3. 4. 5. Amendment V No person shall be held to answer for a capital, or otherwise infamous crime, unless on a presentment or indictment of a grand jury. . . ; nor shall any person be subject for the same offense to be twice put in jeopardy of life or limb; nor shall be compelled in any criminal case to be a witness against himself, nor be deprived of life, liberty, or property, without due process of law; nor shall private property be taken for public use, without just compensation.

n Chicago, Burlington, & Quincy RR v Chicago, 1897 n n n The 5 th Amendment prohibits the U. S. gov’t. from such action; now the “due process” clause of the 14 th Am. was deemed to prevent states from doing it either. The door was opened to applying the protections of the Bill of Rights to the states as components of the “liberty” which can not be denied w/o due process Court also began to [re-]interpret “due process” to mean more than mere “procedural formality” but included a “rational basis” as well, i. e. , there must be sufficient justification for the state action depriving a person of liberty or property, and the courts would decide if there was or not; this was the basis of “substantive due process”

The Golden Age of Substantive D. P. n Lochner v New York (1905) n n State’s police power exercised to regulate hours of work of bakery workers Challenged as a violation of “liberty” under the due process clause n Limiting hours a worker could “contract” to work [thus limiting amount of wages which could be earned] infringed “liberty” protected by due process clause, e. g. , “liberty of contract” n Court substituted its judgment for that of the state legislature concerning the health hazards facing bakers, thus concluded there was no rational basis for allowing the exercise of the state’s police power

The Reappearance/Golden Age of Substantive D. P. n Lochner v New York (1905) n n This case represented the high water mark of substantive due process jurisprudence and became one of the most reviled cases in Court history for what was viewed as judicial arrogance The Court would continue to apply this doctrine to strike down state exercises of police powers to limit “property rights” over the “public interest” until the 1930 s.

n J & L’s argument: Statute is unconstitutional violation of commerce clause powers in that it regulates “labor relations in production, ” not “commerce” n violation of Art. III, Sec 2 in that it vests judicial powers in an executive branch agency n violation the DP clause of 5 th Amend. because it interferes with the freedom of contract n violation of the 10 th Amend. in that it invades powers reserved to the States, i. e. , regulation of intra-state economic activity n n Rulings: n Scope of act clearly within Congress’s power and not violation of either Art. I commerce power or 10 th Amend since it regulates only economic activities which “burden or obstruct” interstate commerce

Whether or not any given economic activity, in fact, burdens or obstructs interstate commerce must be decided on a case-bycase basis; clearly strikes and lockouts in major industrial concerns engaging in interstate commerce qualifies n To separate the act of production (and all the activities associated with it, such as Labor-Management relations) from “commerce” is artificial and would require the Court “to shut our eyes to the plainest facts of our national life. ” n Fundamental cause of Labor-Management conflict (with its potential for halting production and constricting commerce) has been Management refusal to deal with unions. n To violate the 5 th Amend. DP clause, restrictions on “liberty and property” must be “arbitrary and capricious; ” NOT the case here since owner’s rights must be balanced by the employees’ “correlative right to organize” for the purpose of improving their conditions of employment. n

n West Coast Hotel v. Parrish (1937) n n Important Facts: state passed minimum wage law for women and minors; Parrish sued her employer for violating the act Employer’s argument: Statute is unconstitutional violation of DP clause of 14 th Amend. because it interferes with the freedom of contract Ruling: Constitution doesn’t speak of “freedom of contract, so if it exists, it must be found in the “liberty” protected by DP BUT, the DP clause doesn’t protect people from the legitimate exercise of the state’s police powers

The End of Substantive Due Process n West Coast Hotel v. Parrish (1937) n n Laws which are “reasonable” in relation to their subject and adopted in “the interest of the community” are valid exercises of police power and do not violate DP (which is clearly understood to have a substantive component only when the standard of “reason” has been breached) Exploitation of a class of workers who have unequal bargaining power with their employers is detrimental to the workers’ health and burdens the public who will be taxed to support these workers under the welfare system

The End of Substantive Due Process n West Coast Hotel v. Parrish (1937) n n n Four dissenters have an easy case: the Court had just struck down a minimum wage law in 1923 on the very grounds that the employer asserts today. So much for the principle of stare decisis Historical note: this case (and its companion NLRB v J&L Steel) involved the “switch in time which saved nine. ” Justice Owen Roberts switched from his previous opposition to New Deal legislation to avert the pending Constitutional crisis many were predicting and which had inspired FDR’s “court packing” scheme

The End of Economic Substantive Due Process n West Coast Hotel v. Parrish (1937) n n Further historical notes: without using the language of substantive DP, the Court has resurrected the doctrine in the realm of civil liberties law. The “right of privacy” is now on the same level as “freedom of contract” previously was as a constitutional doctrine. The Rhenquist Court made efforts to salvage some protection for “property rights” by use of the “takings” clause of the 5 th Amend. Nollan v Calf. Coastal Commission (1987) n Dolan v City of Tigard (1994) n BUT Kelo v City of New London (2005) n