The Recovery Discovery of Your Apocalyptic Imagination 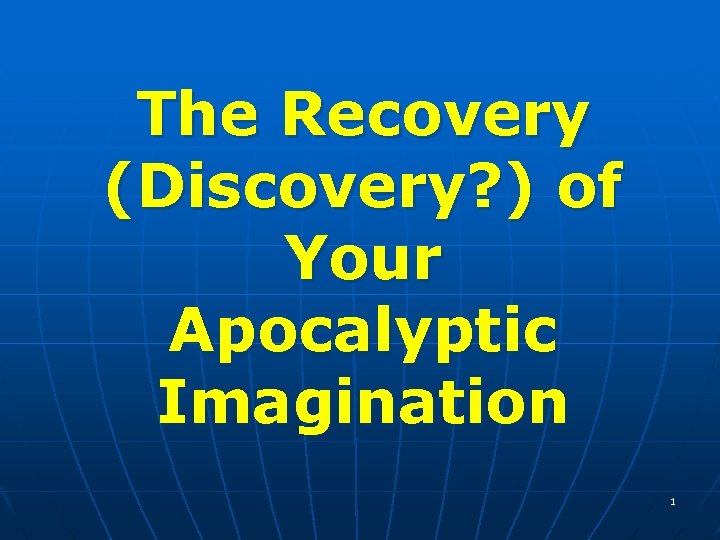 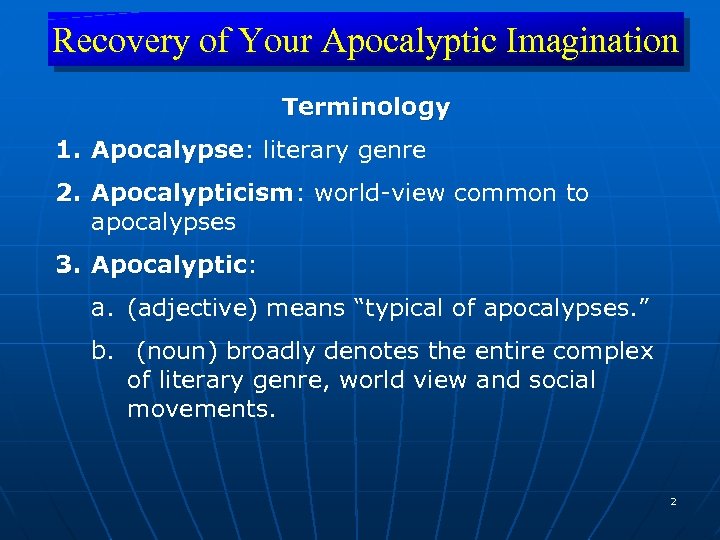 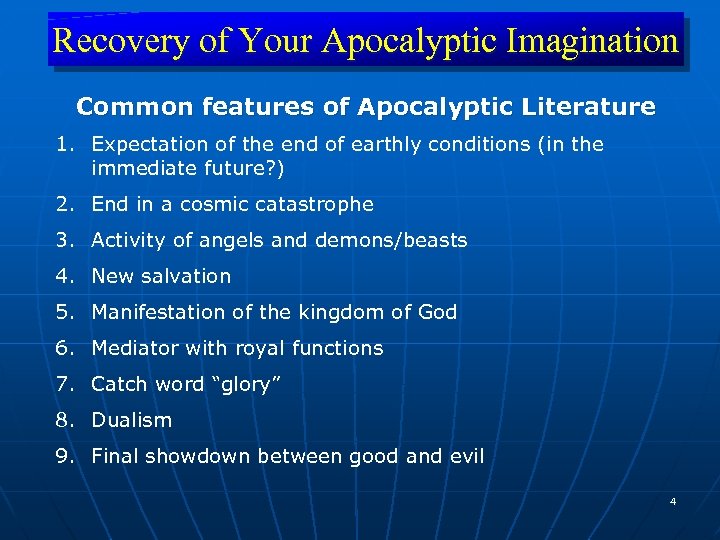 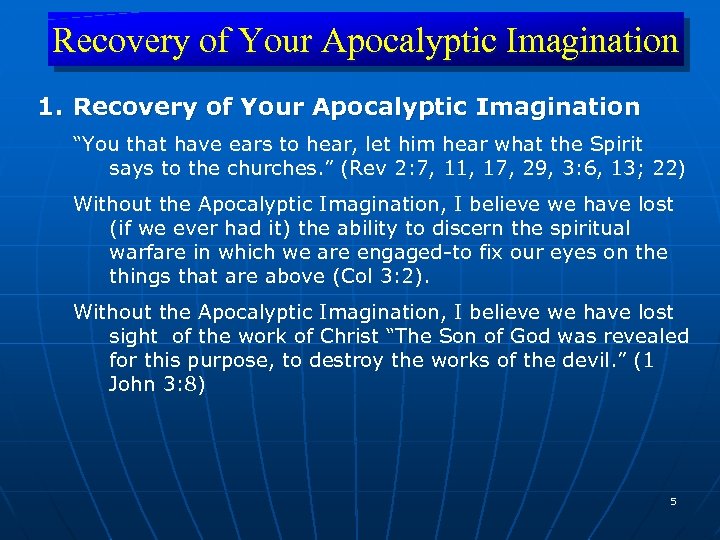 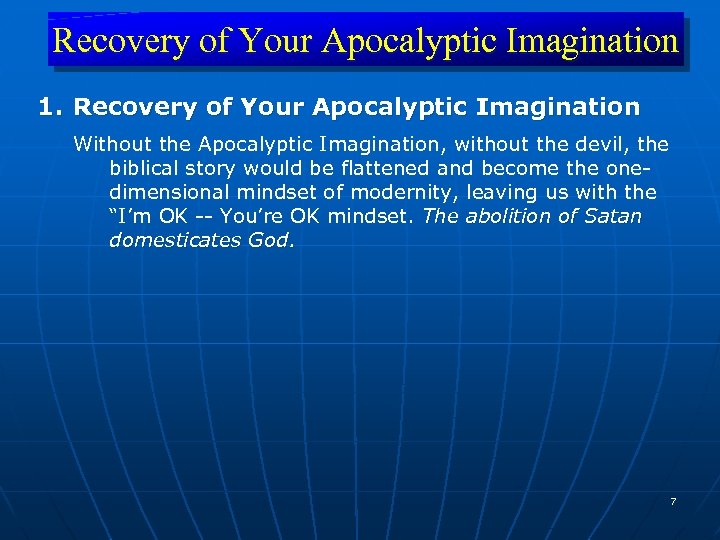 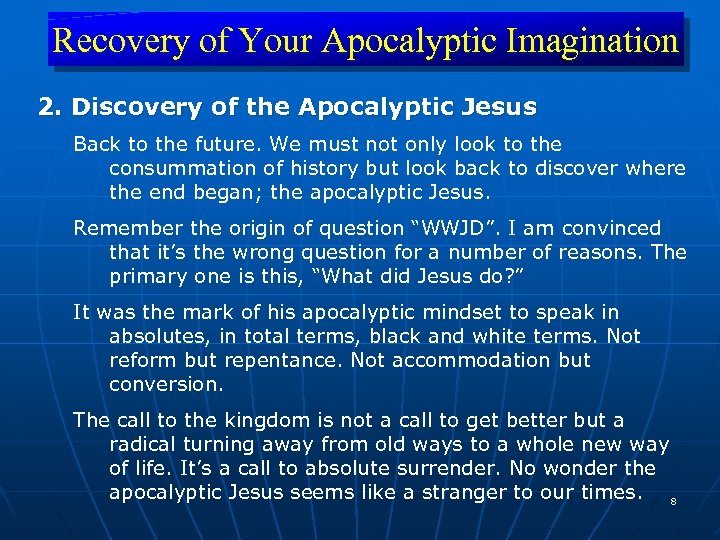 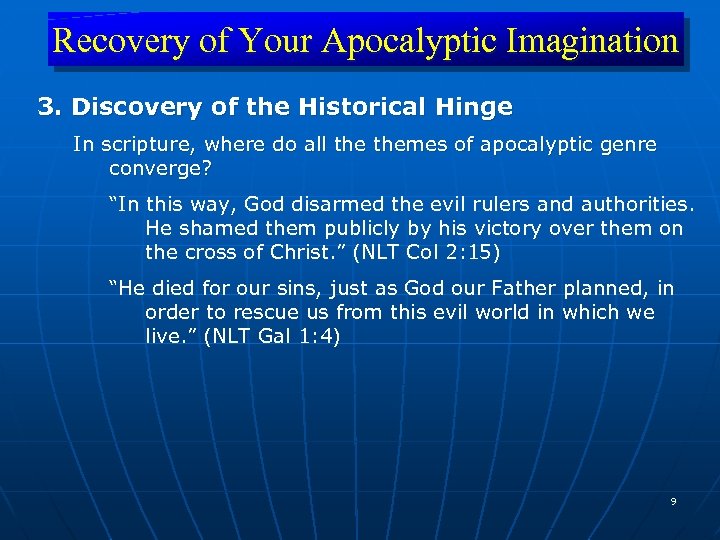 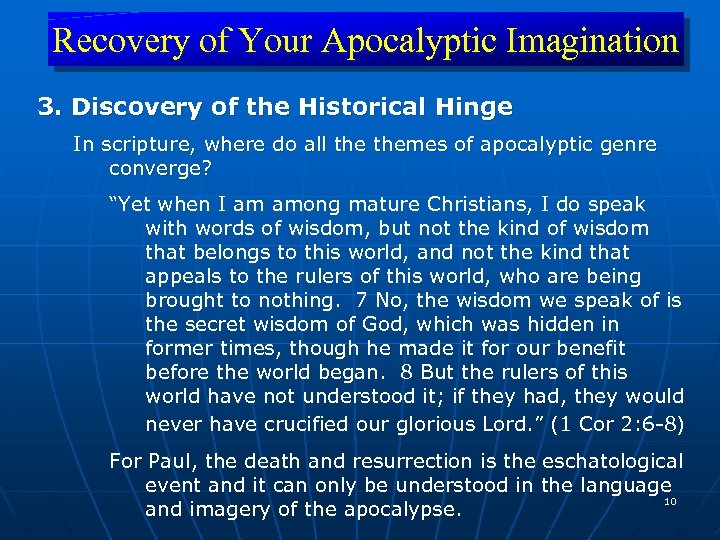 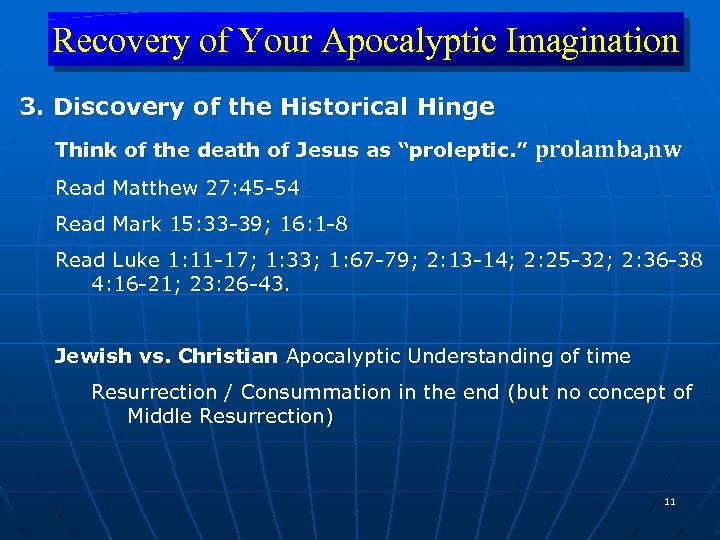 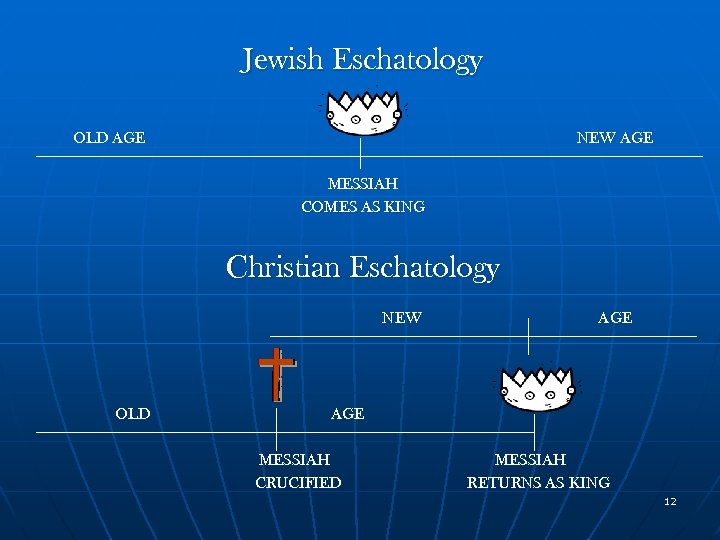 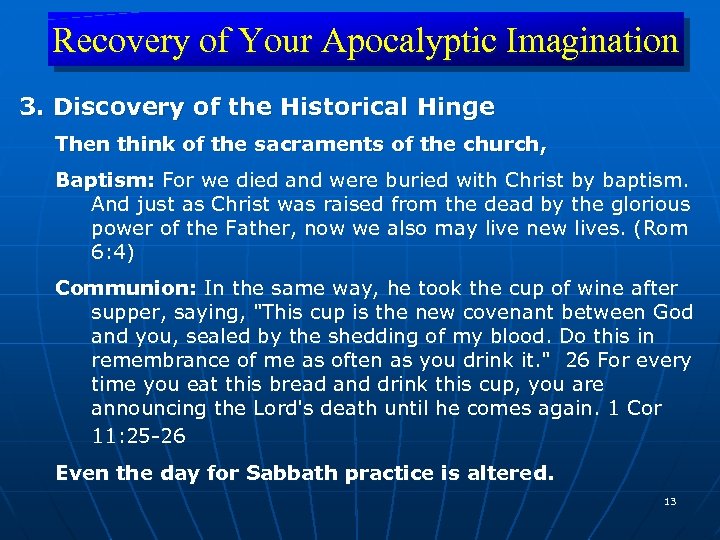 Скачать презентацию The Recovery Discovery of Your Apocalyptic Imagination

The Recovery (Discovery? ) of Your Apocalyptic Imagination 1

Prophecy vs. Apocalypticism Most historians of ancient Judaism agree that the apocalyptic views found in such books as Daniel and the non-canonical works of 1 Enoch and 4 Ezra are closely linked to the older prophetic views found in the classical prophets, including Isaiah, Jeremiah, Amos, and Micah. Both prophets and apocalypticists believed that God was going to intervene on behalf of his people Israel to alleviate their suffering. But they disagreed on why the suffering was occurring, who was at fault, and how it would be removed. Prophetic View Apocalyptic View Why do God’s people suffer? They have sinned against God, and he is punishing them for it. There are evil cosmic forces in the world that are opposed to God and are creating havoc among his righteous people. Who is causing the suffering? God himself. He is punishing his people in order to get them to repent. The evil cosmic forces. They are bent on hurting God’s people. Who is at fault? The people of God, because they have sinned. The cosmic forces in the world, who oppose God’s righteous ones. What must happen to bring the suffering to the end? The people of God must repent and turn back to him. God must intervene on behalf of his righteous people, and destroy the forces of evil. What must the people of God do? Turn away from their sin and return to God. Remain faithful and wait for God to intervene. 3

Recovery of Your Apocalyptic Imagination Common features of Apocalyptic Literature 1. Expectation of the end of earthly conditions (in the immediate future? ) 2. End in a cosmic catastrophe 3. Activity of angels and demons/beasts 4. New salvation 5. Manifestation of the kingdom of God 6. Mediator with royal functions 7. Catch word “glory” 8. Dualism 9. Final showdown between good and evil 4

Recovery of Your Apocalyptic Imagination 2. Discovery of the Apocalyptic Jesus Back to the future. We must not only look to the consummation of history but look back to discover where the end began; the apocalyptic Jesus. Remember the origin of question “WWJD”. I am convinced that it’s the wrong question for a number of reasons. The primary one is this, “What did Jesus do? ” It was the mark of his apocalyptic mindset to speak in absolutes, in total terms, black and white terms. Not reform but repentance. Not accommodation but conversion. The call to the kingdom is not a call to get better but a radical turning away from old ways to a whole new way of life. It’s a call to absolute surrender. No wonder the apocalyptic Jesus seems like a stranger to our times. 8

Recovery of Your Apocalyptic Imagination 3. Discovery of the Historical Hinge In scripture, where do all themes of apocalyptic genre converge? “In this way, God disarmed the evil rulers and authorities. He shamed them publicly by his victory over them on the cross of Christ. ” (NLT Col 2: 15) “He died for our sins, just as God our Father planned, in order to rescue us from this evil world in which we live. ” (NLT Gal 1: 4) 9

Recovery of Your Apocalyptic Imagination 3. Discovery of the Historical Hinge In scripture, where do all themes of apocalyptic genre converge? “Yet when I am among mature Christians, I do speak with words of wisdom, but not the kind of wisdom that belongs to this world, and not the kind that appeals to the rulers of this world, who are being brought to nothing. 7 No, the wisdom we speak of is the secret wisdom of God, which was hidden in former times, though he made it for our benefit before the world began. 8 But the rulers of this world have not understood it; if they had, they would never have crucified our glorious Lord. ” (1 Cor 2: 6 -8) For Paul, the death and resurrection is the eschatological event and it can only be understood in the language 10 and imagery of the apocalypse.

Recovery of Your Apocalyptic Imagination 3. Discovery of the Historical Hinge Then think of the sacraments of the church, Baptism: For we died and were buried with Christ by baptism. And just as Christ was raised from the dead by the glorious power of the Father, now we also may live new lives. (Rom 6: 4) Communion: In the same way, he took the cup of wine after supper, saying, "This cup is the new covenant between God and you, sealed by the shedding of my blood. Do this in remembrance of me as often as you drink it. " 26 For every time you eat this bread and drink this cup, you are announcing the Lord's death until he comes again. 1 Cor 11: 25 -26 Even the day for Sabbath practice is altered. 13

Card 1. Imagine that while travelling during your

Pre-Departure Orientation The topics to be covered