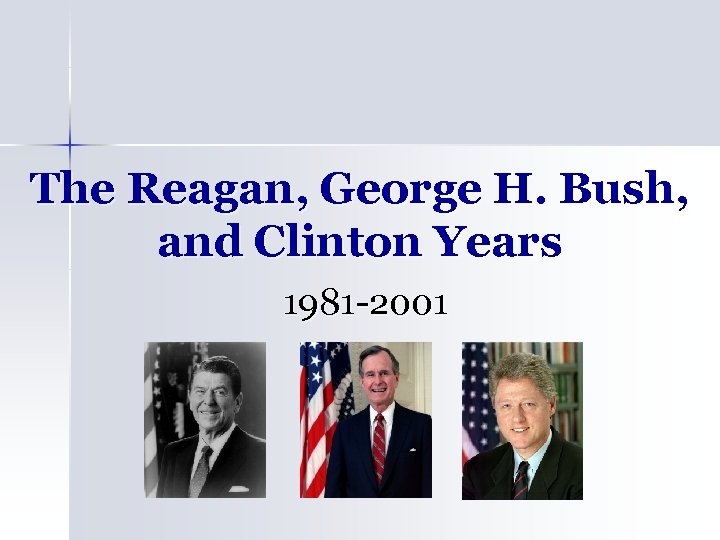 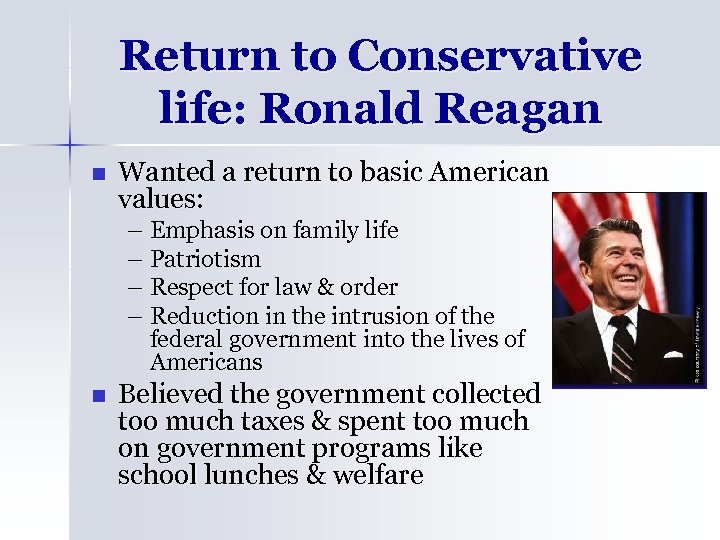 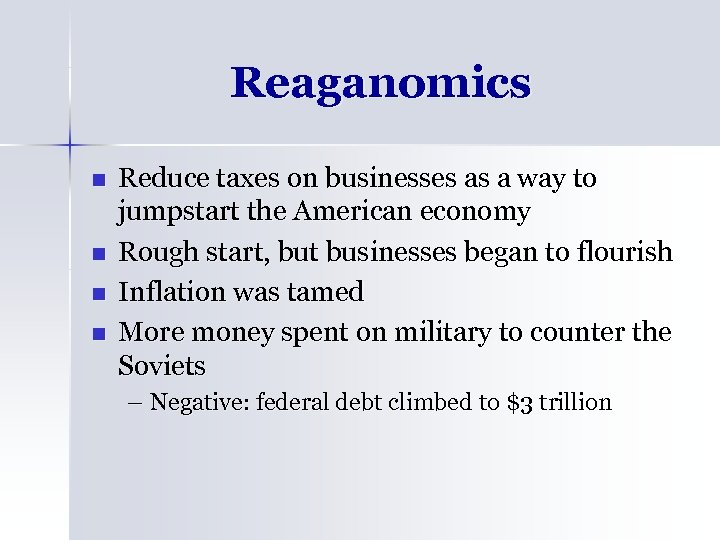 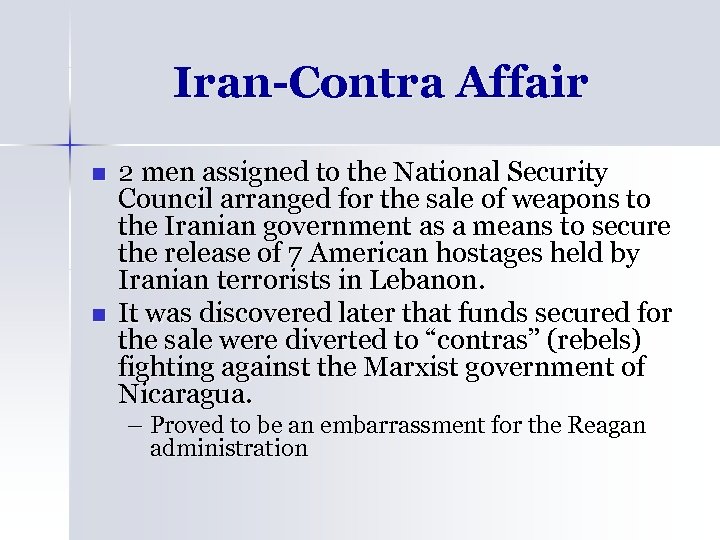 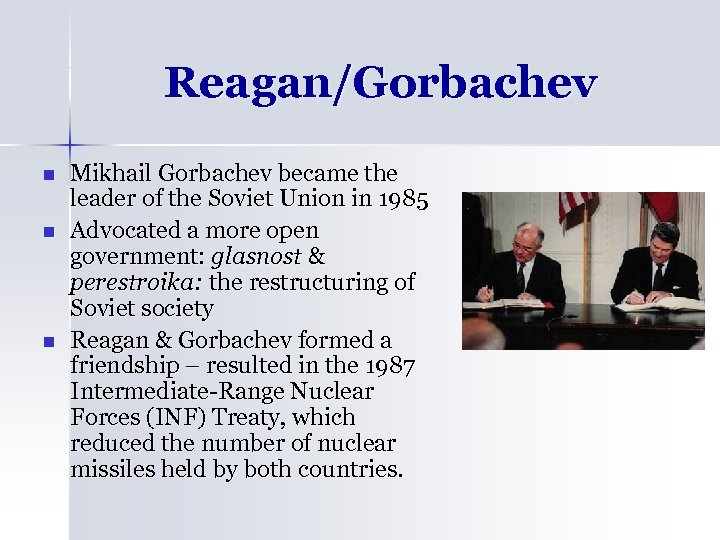 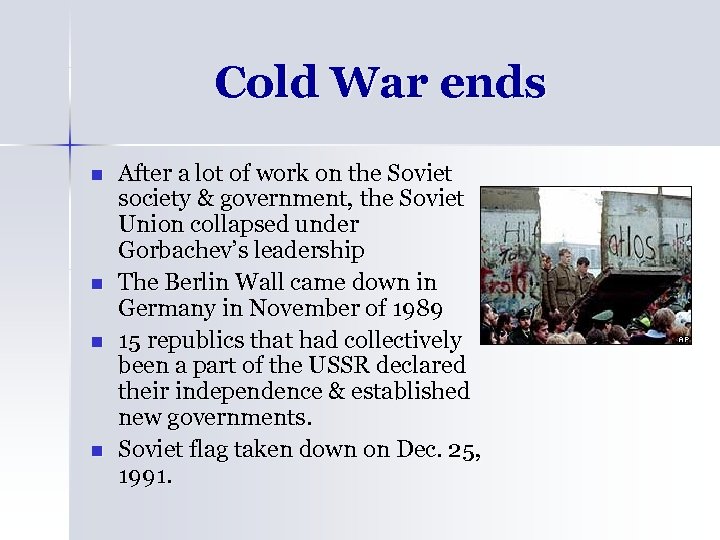 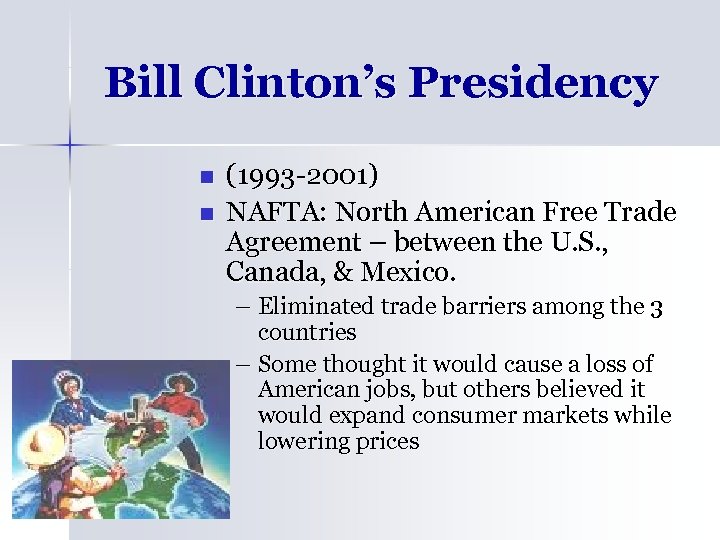 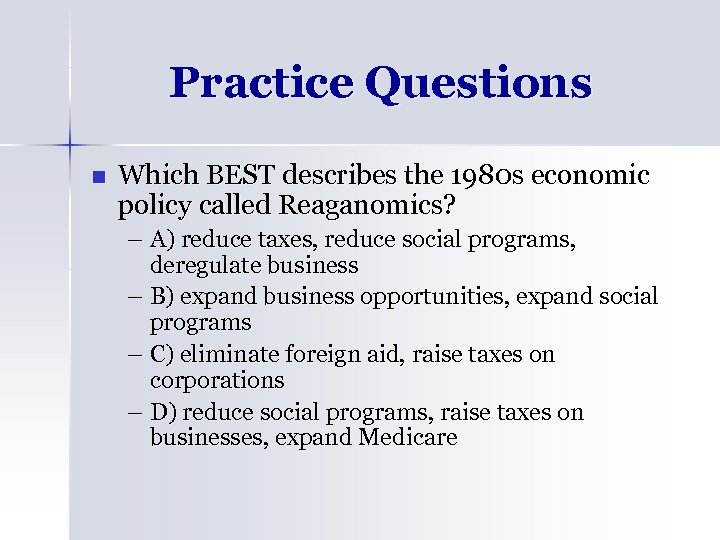 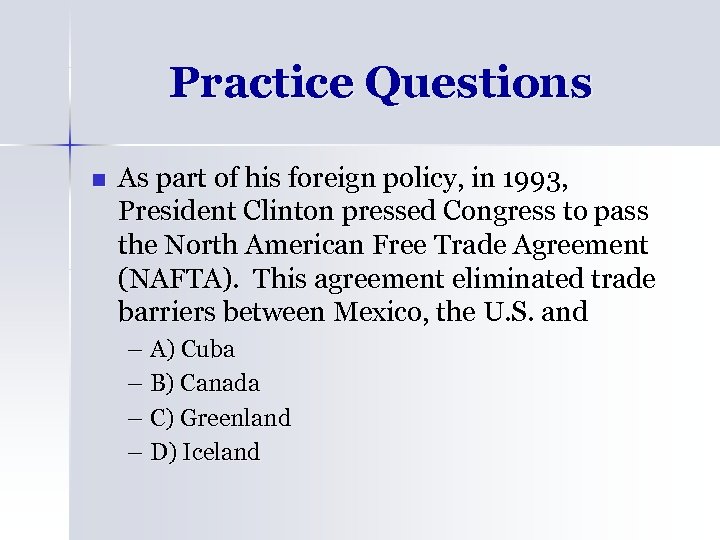 Return to Conservative life: Ronald Reagan n Wanted a return to basic American values: – Emphasis on family life – Patriotism – Respect for law & order – Reduction in the intrusion of the federal government into the lives of Americans n Believed the government collected too much taxes & spent too much on government programs like school lunches & welfare

Reaganomics n n Reduce taxes on businesses as a way to jumpstart the American economy Rough start, but businesses began to flourish Inflation was tamed More money spent on military to counter the Soviets – Negative: federal debt climbed to $3 trillion

Iran-Contra Affair n n 2 men assigned to the National Security Council arranged for the sale of weapons to the Iranian government as a means to secure the release of 7 American hostages held by Iranian terrorists in Lebanon. It was discovered later that funds secured for the sale were diverted to “contras” (rebels) fighting against the Marxist government of Nicaragua. – Proved to be an embarrassment for the Reagan administration

Reagan/Gorbachev n n n Mikhail Gorbachev became the leader of the Soviet Union in 1985 Advocated a more open government: glasnost & perestroika: the restructuring of Soviet society Reagan & Gorbachev formed a friendship – resulted in the 1987 Intermediate-Range Nuclear Forces (INF) Treaty, which reduced the number of nuclear missiles held by both countries.

Cold War ends n n After a lot of work on the Soviet society & government, the Soviet Union collapsed under Gorbachev’s leadership The Berlin Wall came down in Germany in November of 1989 15 republics that had collectively been a part of the USSR declared their independence & established new governments. Soviet flag taken down on Dec. 25, 1991.

Bill Clinton’s Presidency n n (1993 -2001) NAFTA: North American Free Trade Agreement – between the U. S. , Canada, & Mexico. – Eliminated trade barriers among the 3 countries – Some thought it would cause a loss of American jobs, but others believed it would expand consumer markets while lowering prices

Impeachment n n Had an inappropriate relationship with a White House intern: Monica Lewinsky Problems arose as to whether or not he had committed perjury when testifying under oath about his relationship with Lewinsky Articles of impeachment were voted in Congress (where there was a Republican majority) – & it was approved. In February 1999, the Senate acquitted Clinton of wrongdoing in office, allowing him to remain in office.

Practice Questions n As part of his foreign policy, in 1993, President Clinton pressed Congress to pass the North American Free Trade Agreement (NAFTA). This agreement eliminated trade barriers between Mexico, the U. S. and – A) Cuba – B) Canada – C) Greenland – D) Iceland