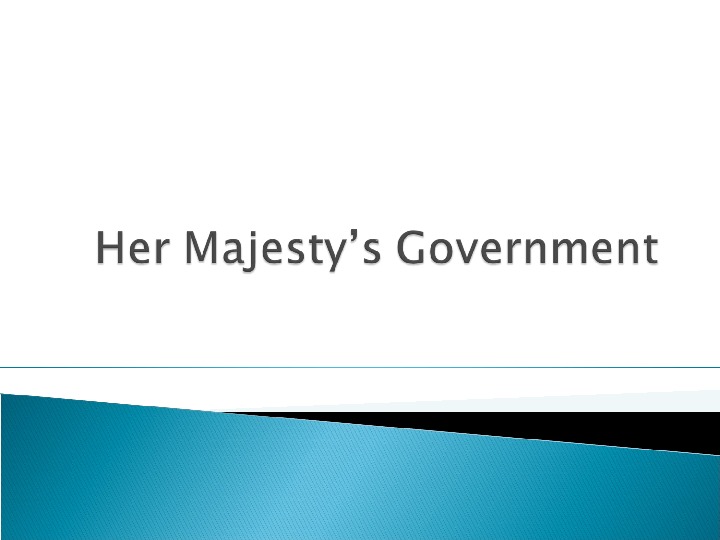 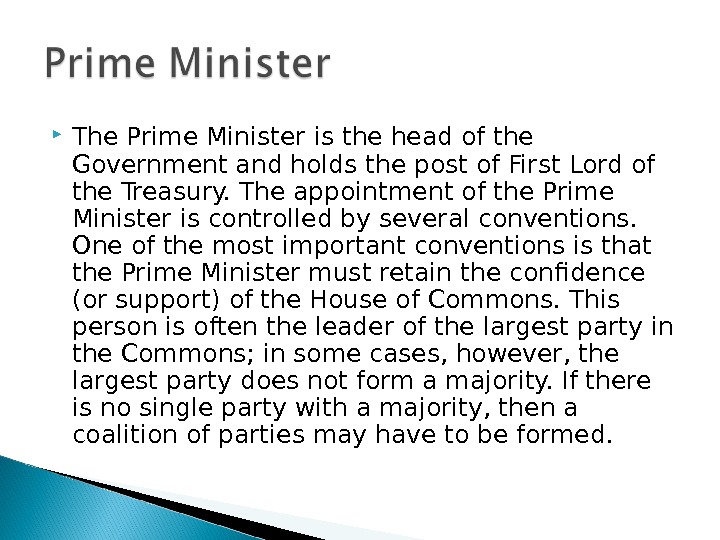 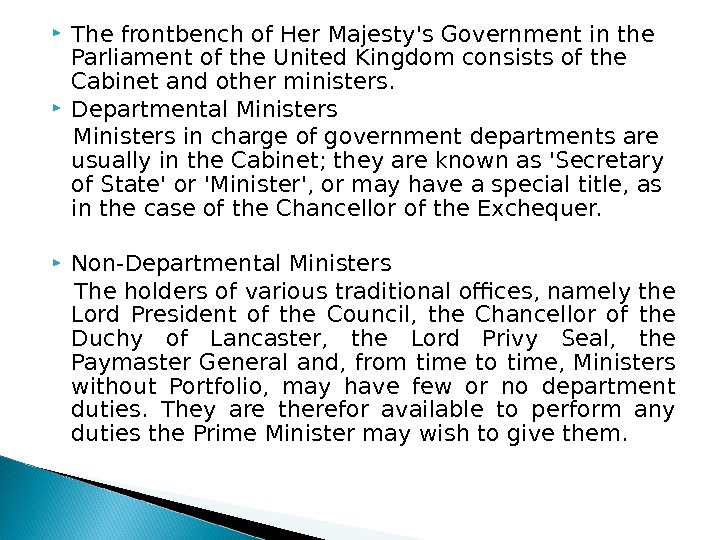 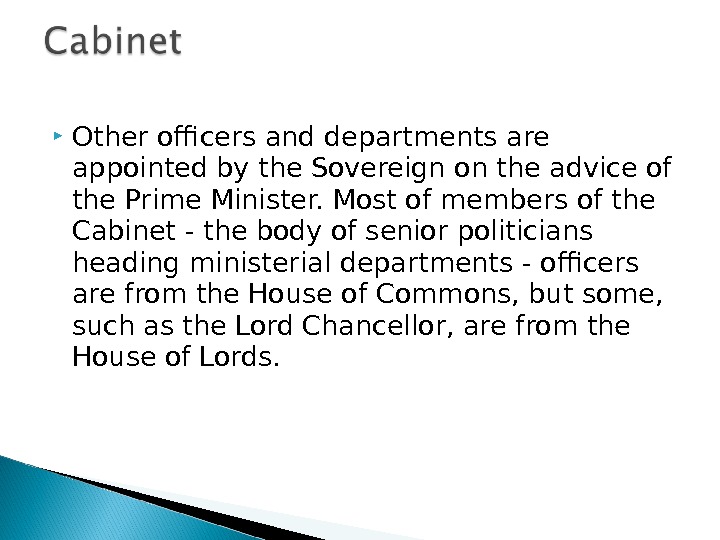 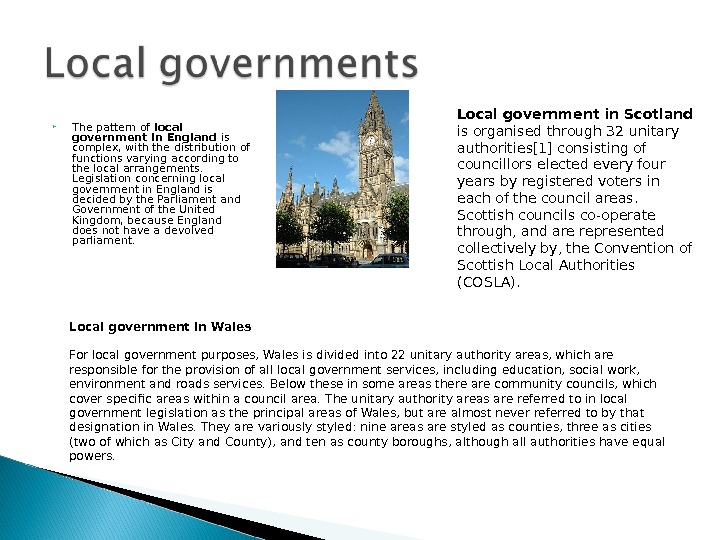 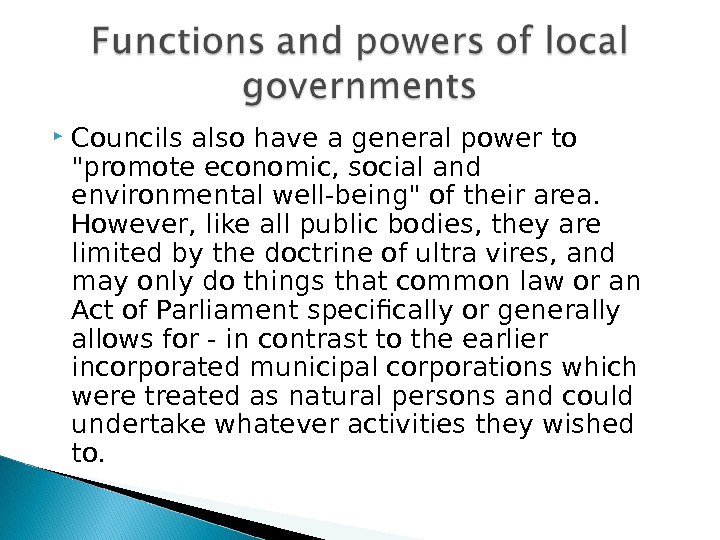 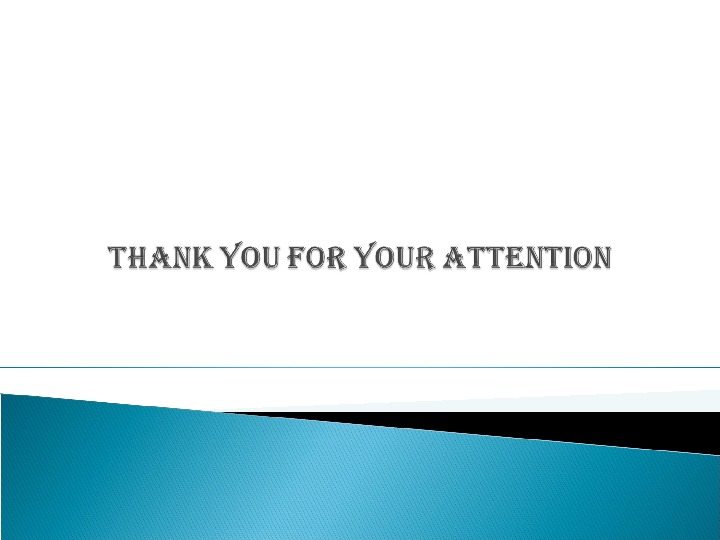 Скачать презентацию The phrase Her Majesty’s Government is a

The frontbench of Her Majesty’s Government in the Parliament of the United Kingdom consists of the Cabinet and other ministers. Departmental Ministers in charge of government departments are usually in the Cabinet; they are known as ‘Secretary of State’ or ‘Minister’, or may have a special title, as in the case of the Chancellor of the Exchequer. Non-Departmental Ministers The holders of various traditional offices, namely the Lord President of the Council, the Chancellor of the Duchy of Lancaster, the Lord Privy Seal, the Paymaster General and, from time to time, Ministers without Portfolio, may have few or no department duties. They are therefor available to perform any duties the Prime Minister may wish to give them.

The modern Cabinet system was set up by Prime Minister David Lloyd George during his premiership of 1916– 22, with a Cabinet Office and Secretariat, committee structures, unpublished Minutes, and a clearer relationship with departmental Cabinet Ministers. This development grew out of the exigencies of the First World War, where faster and better co-ordinated decisions across Government were seen as crucial part of the war effort. » War is too important to be left to the generals. “© Lloyd George

The pattern of local government in England is complex, with the distribution of functions varying according to the local arrangements. Legislation concerning local government in England is decided by the Parliament and Government of the United Kingdom, because England does not have a devolved parliament. Local government in Scotland is organised through 32 unitary authorities[1] consisting of councillors elected every four years by registered voters in each of the council areas. Scottish councils co-operate through, and are represented collectively by, the Convention of Scottish Local Authorities (COSLA). Local government in Wales For local government purposes, Wales is divided into 22 unitary authority areas, which are responsible for the provision of all local government services, including education, social work, environment and roads services. Below these in some areas there are community councils, which cover specific areas within a council area. The unitary authority areas are referred to in local government legislation as the principal areas of Wales, but are almost never referred to by that designation in Wales. They are variously styled: nine areas are styled as counties, three as cities (two of which as City and County), and ten as county boroughs, although all authorities have equal powers.

Councils also have a general power to «promote economic, social and environmental well-being» of their area. However, like all public bodies, they are limited by the doctrine of ultra vires, and may only do things that common law or an Act of Parliament specifically or generally allows for — in contrast to the earlier incorporated municipal corporations which were treated as natural persons and could undertake whatever activities they wished to.