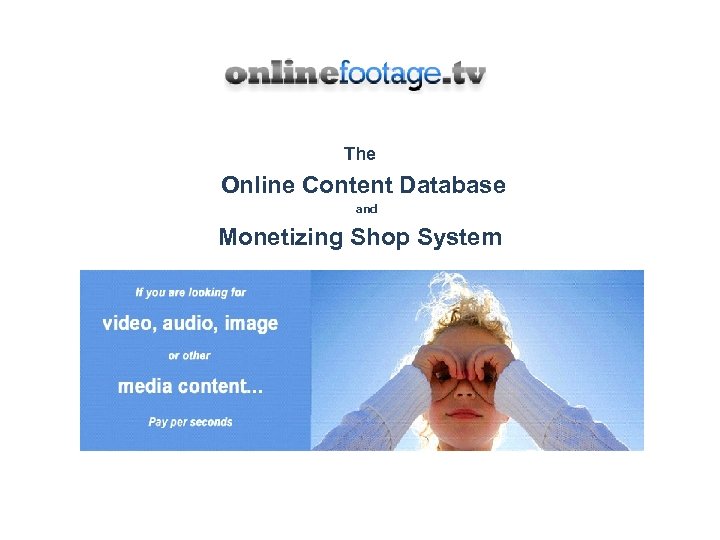 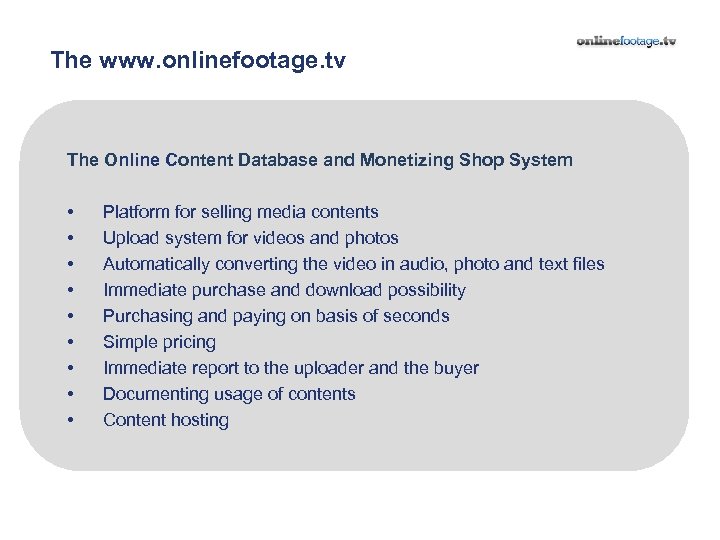 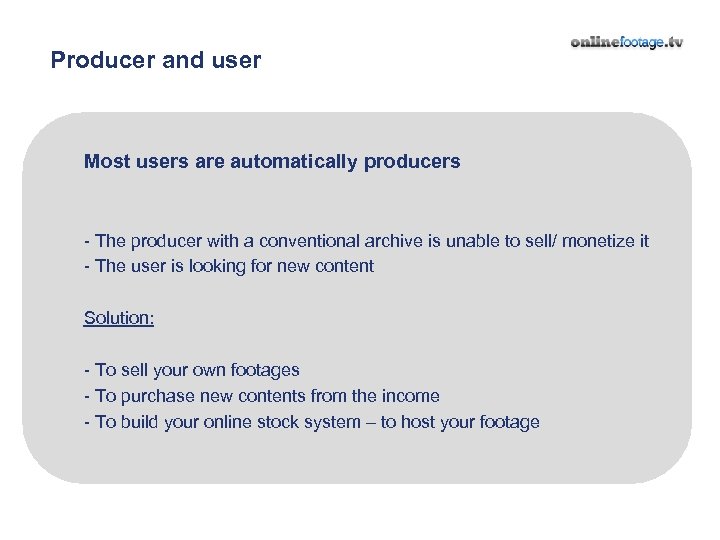 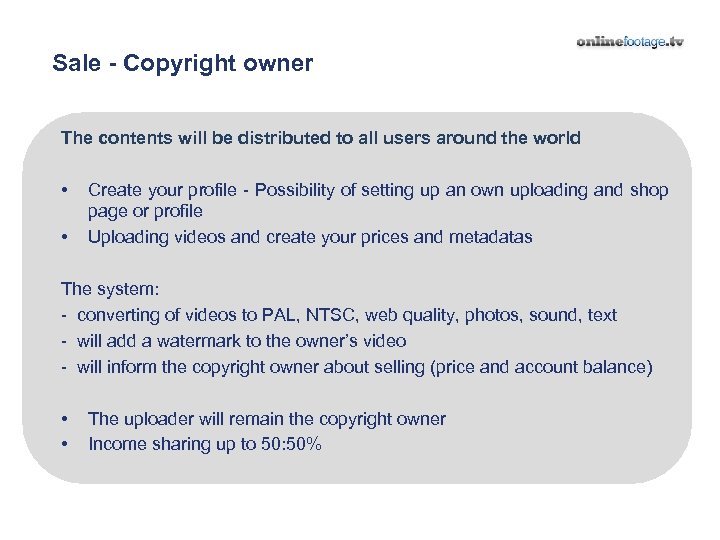 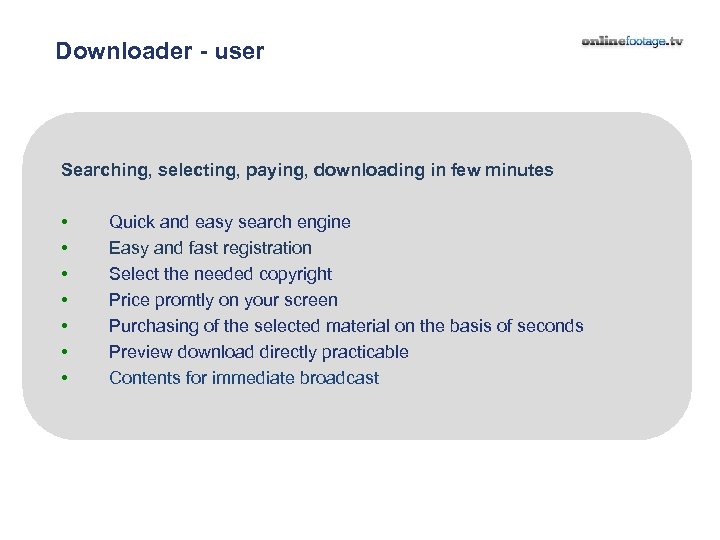 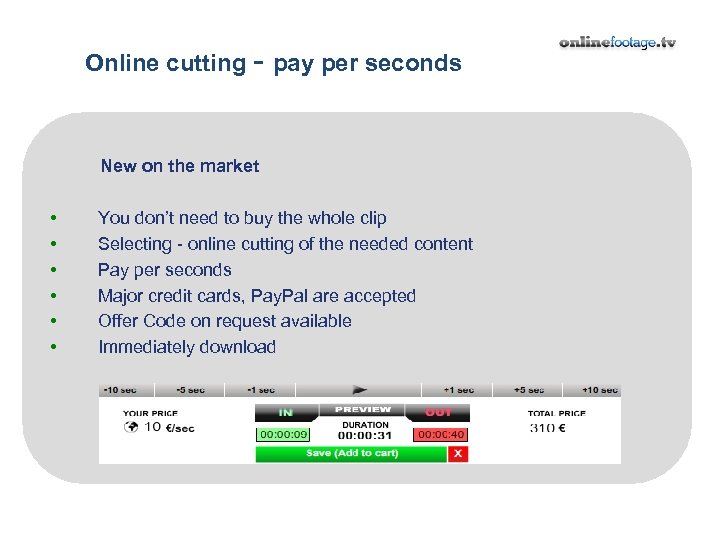 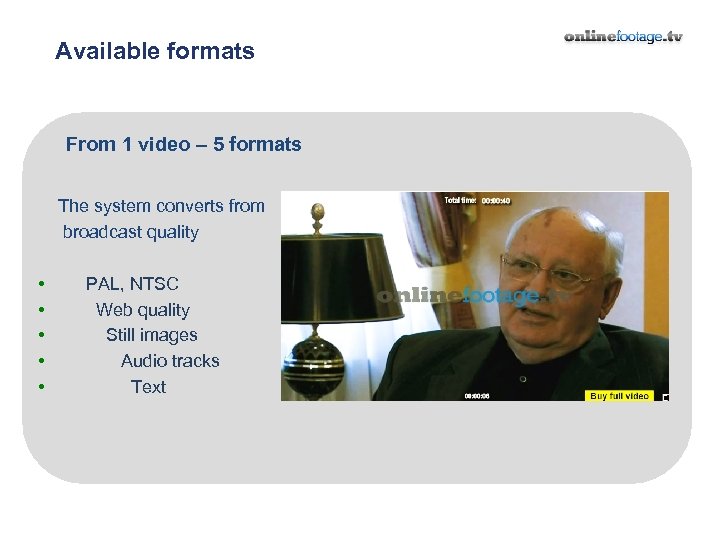 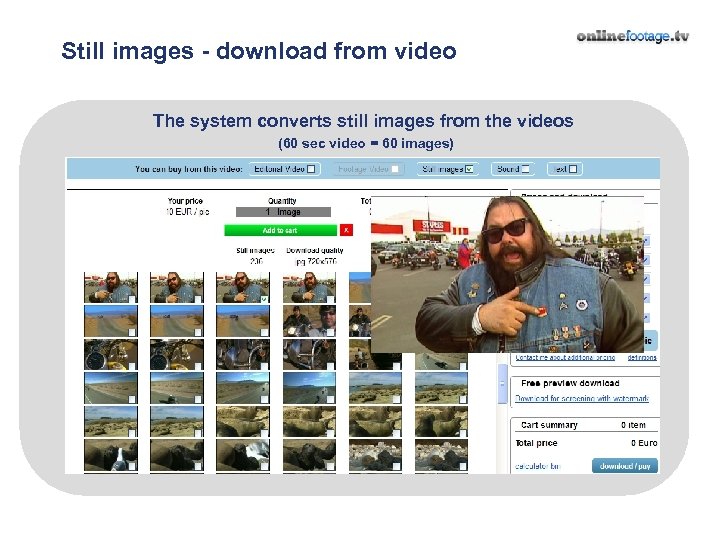 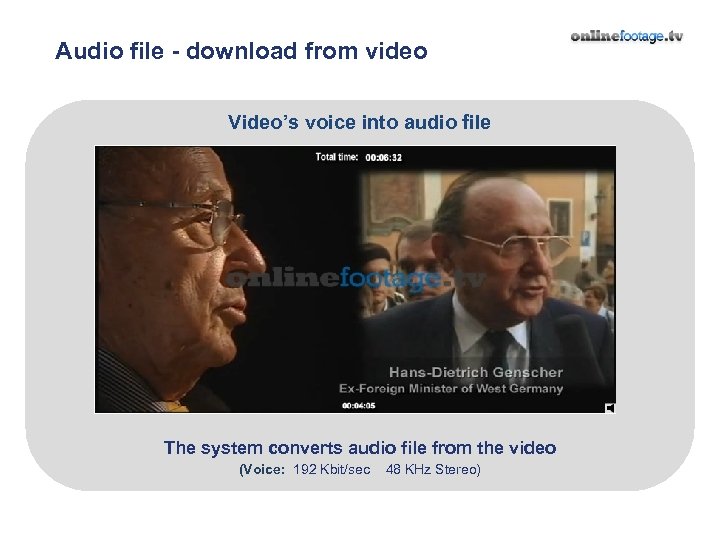 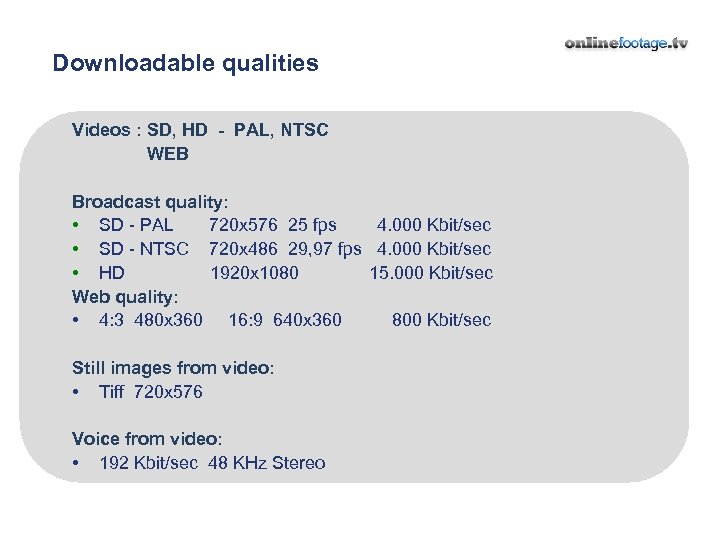 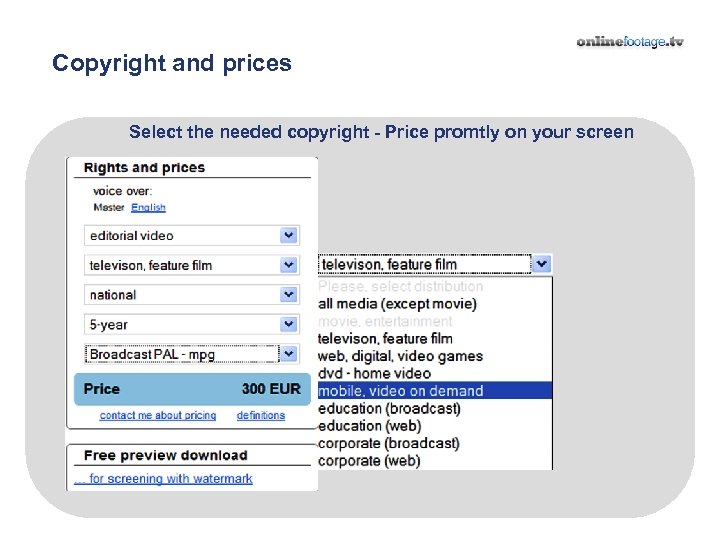 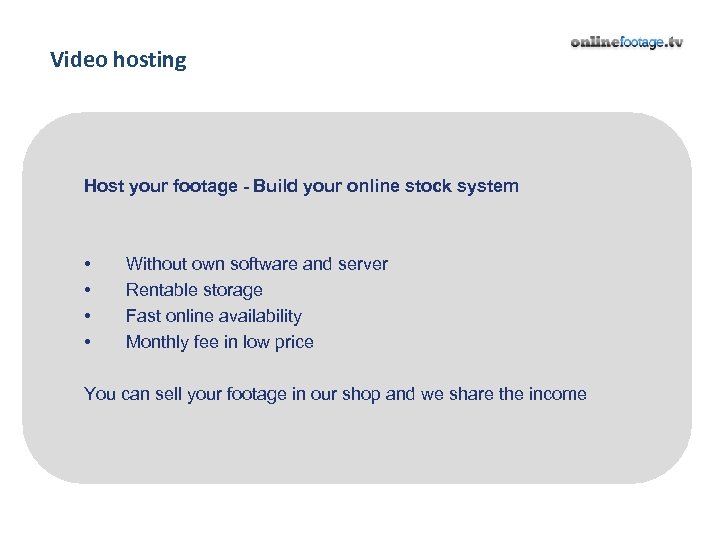 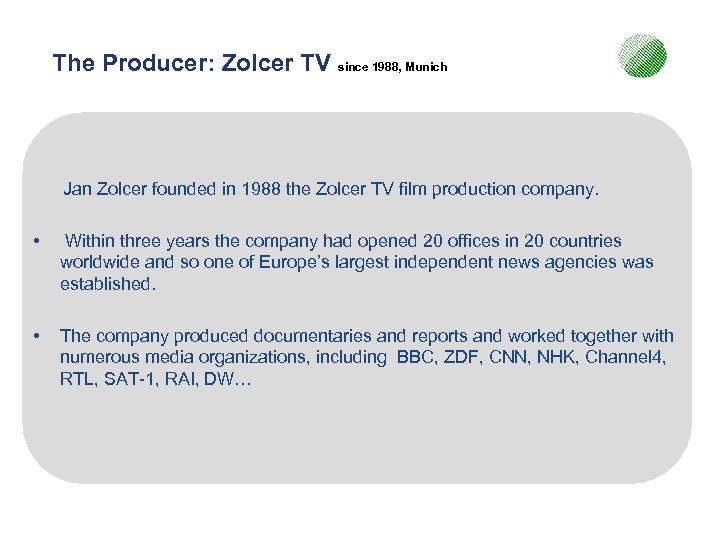 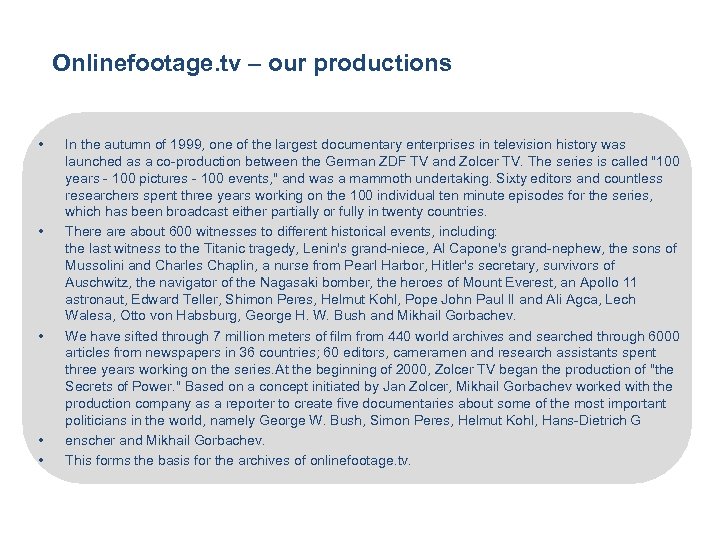 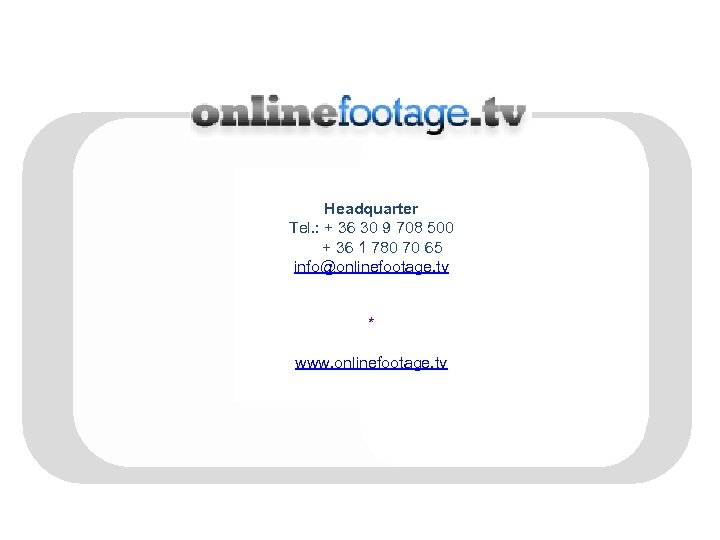 Producer and user Most users are automatically producers - The producer with a conventional archive is unable to sell/ monetize it - The user is looking for new content Solution: - To sell your own footages - To purchase new contents from the income - To build your online stock system – to host your footage

Sale - Copyright owner The contents will be distributed to all users around the world • • Create your profile - Possibility of setting up an own uploading and shop page or profile Uploading videos and create your prices and metadatas The system: - converting of videos to PAL, NTSC, web quality, photos, sound, text - will add a watermark to the owner’s video - will inform the copyright owner about selling (price and account balance) • • The uploader will remain the copyright owner Income sharing up to 50: 50%

The Producer: Zolcer TV since 1988, Munich Jan Zolcer founded in 1988 the Zolcer TV film production company. • • Within three years the company had opened 20 offices in 20 countries worldwide and so one of Europe’s largest independent news agencies was established. The company produced documentaries and reports and worked together with numerous media organizations, including BBC, ZDF, CNN, NHK, Channel 4, RTL, SAT-1, RAI, DW…

Onlinefootage. tv – our productions • • • In the autumn of 1999, one of the largest documentary enterprises in television history was launched as a co-production between the German ZDF TV and Zolcer TV. The series is called "100 years - 100 pictures - 100 events, " and was a mammoth undertaking. Sixty editors and countless researchers spent three years working on the 100 individual ten minute episodes for the series, which has been broadcast either partially or fully in twenty countries. There about 600 witnesses to different historical events, including: the last witness to the Titanic tragedy, Lenin's grand-niece, Al Capone's grand-nephew, the sons of Mussolini and Charles Chaplin, a nurse from Pearl Harbor, Hitler's secretary, survivors of Auschwitz, the navigator of the Nagasaki bomber, the heroes of Mount Everest, an Apollo 11 astronaut, Edward Teller, Shimon Peres, Helmut Kohl, Pope John Paul II and Ali Agca, Lech Walesa, Otto von Habsburg, George H. W. Bush and Mikhail Gorbachev. We have sifted through 7 million meters of film from 440 world archives and searched through 6000 articles from newspapers in 36 countries; 60 editors, cameramen and research assistants spent three years working on the series. At the beginning of 2000, Zolcer TV began the production of "the Secrets of Power. " Based on a concept initiated by Jan Zolcer, Mikhail Gorbachev worked with the production company as a reporter to create five documentaries about some of the most important politicians in the world, namely George W. Bush, Simon Peres, Helmut Kohl, Hans-Dietrich G enscher and Mikhail Gorbachev. This forms the basis for the archives of onlinefootage. tv.