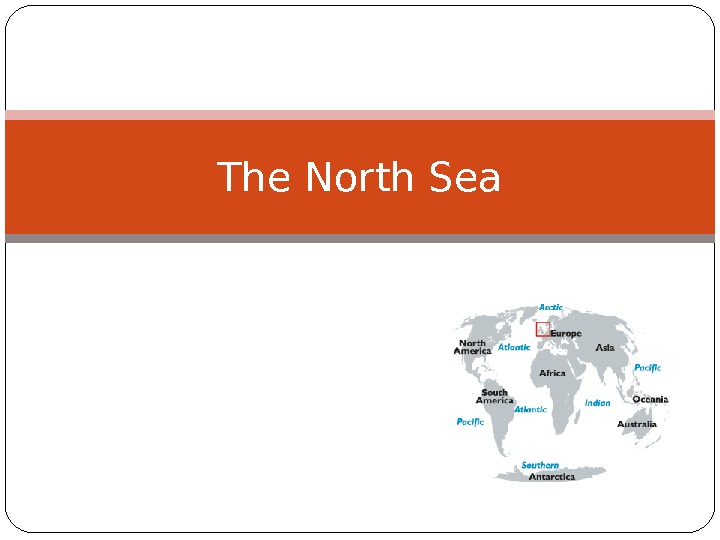 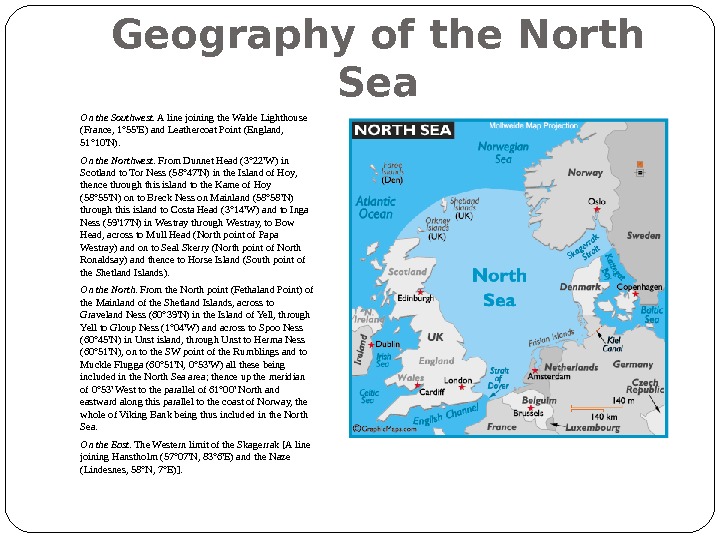 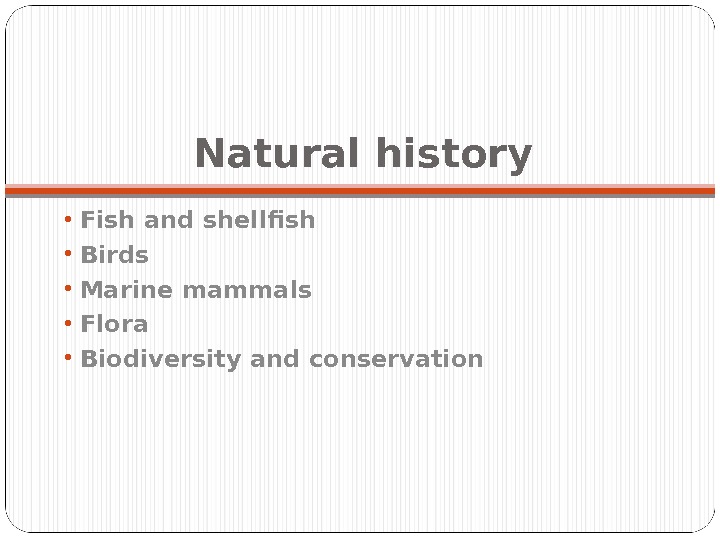 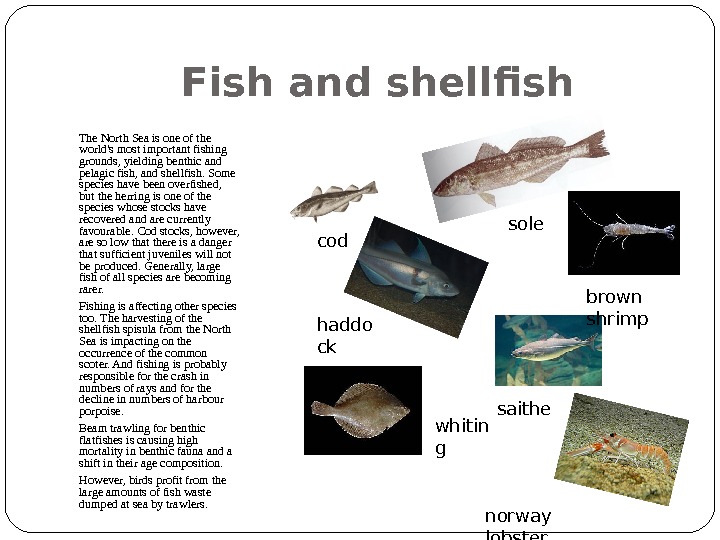 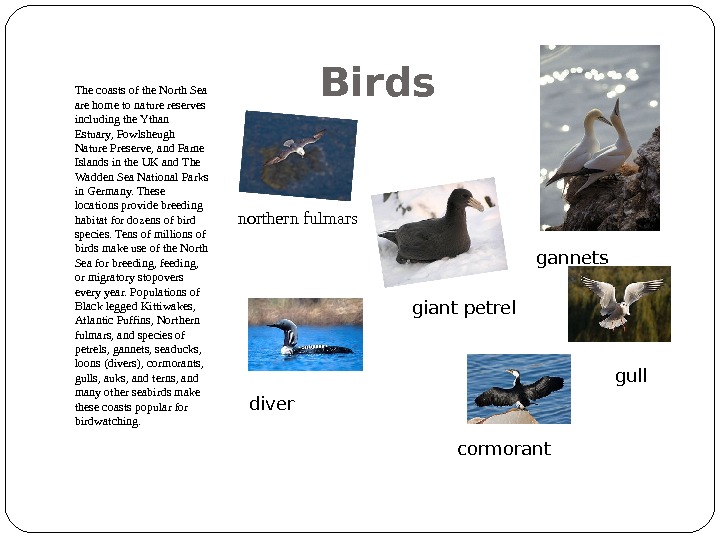 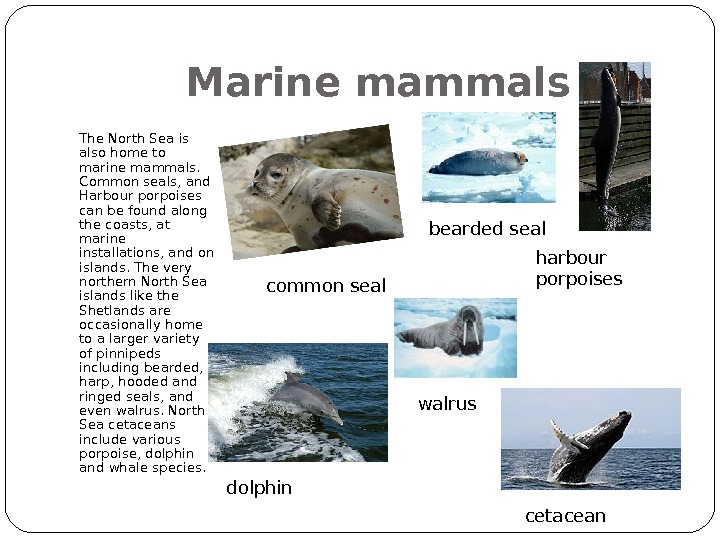 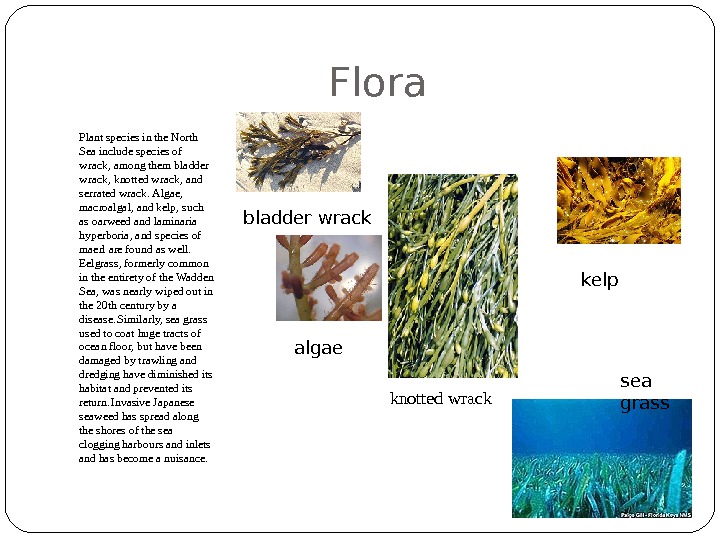 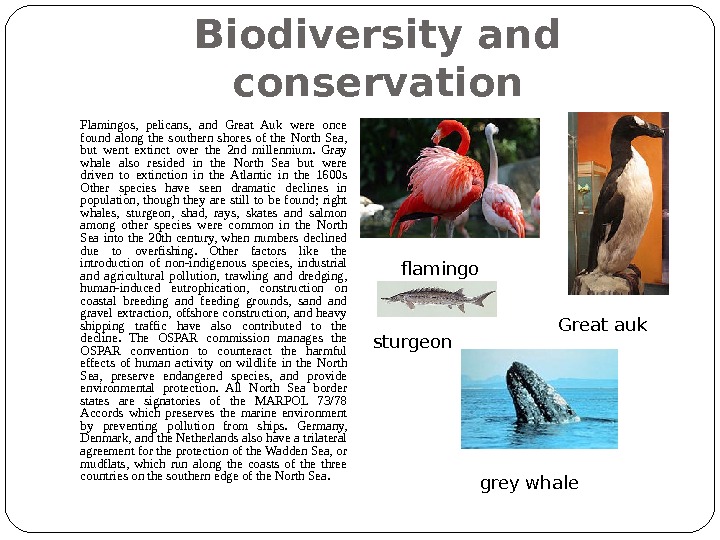 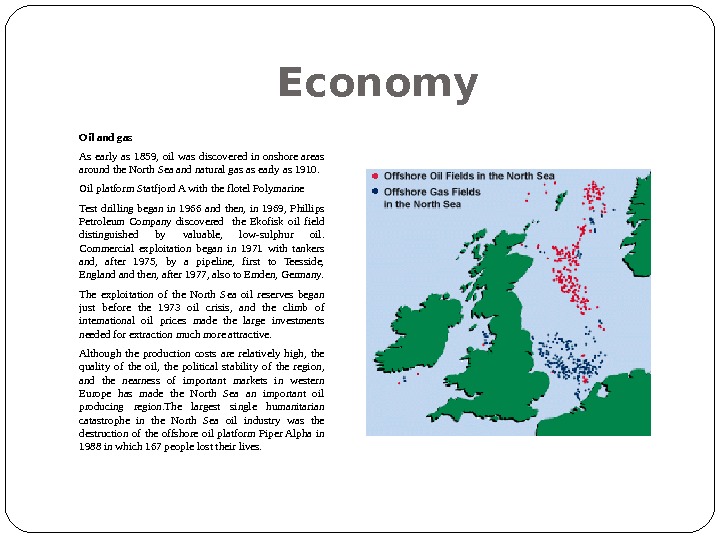 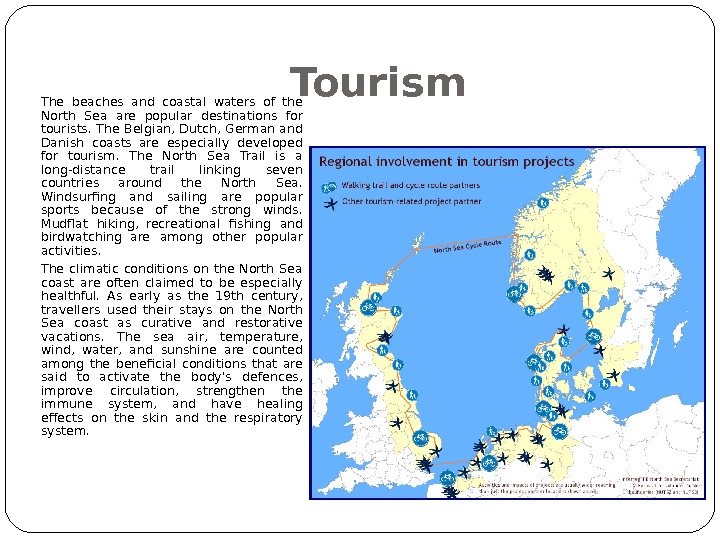 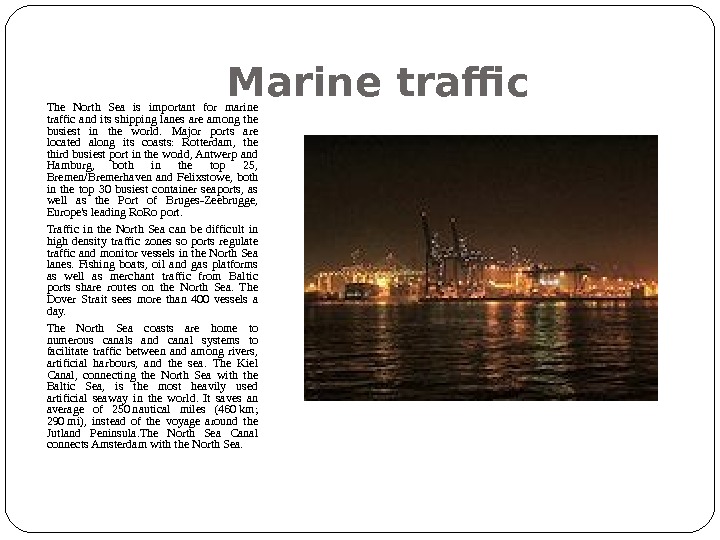 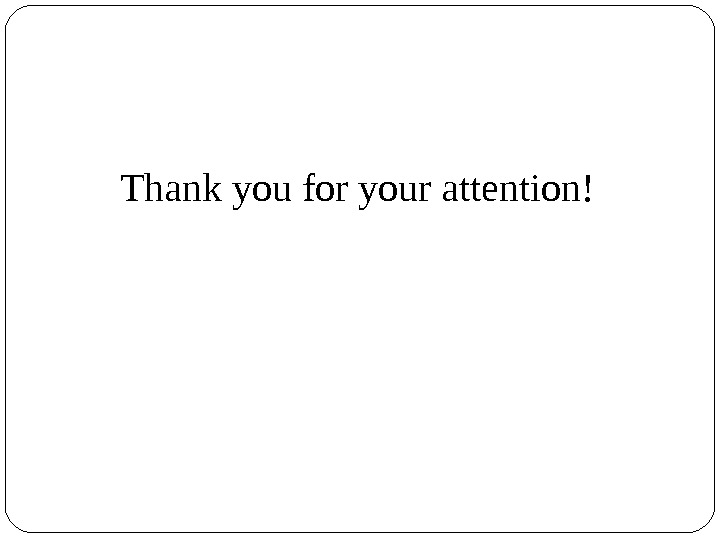 Скачать презентацию The North Sea Geography of the North

Fish and shellfish The North Sea is one of the world’s most important fishing grounds, yielding benthic and pelagic fish, and shellfish. Some species have been overfished, but the herring is one of the species whose stocks have recovered and are currently favourable. Cod stocks, however, are so low that there is a danger that sufficient juveniles will not be produced. Generally, large fish of all species are becoming rarer. Fishing is affecting other species too. The harvesting of the shellfish spisula from the North Sea is impacting on the occurrence of the common scoter. And fishing is probably responsible for the crash in numbers of rays and for the decline in numbers of harbour porpoise. Beam trawling for benthic flatfishes is causing high mortality in benthic fauna and a shift in their age composition. However, birds profit from the large amounts of fish waste dumped at sea by trawlers. norway lobsterhaddo ckcod whitin g saithe sole brown shrimp

Birds. The coasts of the North Sea are home to nature reserves including the Ythan Estuary, Fowlsheugh Nature Preserve, and Farne Islands in the UK and The Wadden Sea National Parks in Germany. These locations provide breeding habitat for dozens of bird species. Tens of millions of birds make use of the North Sea for breeding, feeding, or migratory stopovers every year. Populations of Black legged Kittiwakes, Atlantic Puffins, Northern fulmars, and species of petrels, gannets, seaducks, loons (divers), cormorants, gulls, auks, and terns, and many other seabirds make these coasts popular for birdwatching. northern fulmars giant petrel gannets diver cormorant gull

Marine mammals The North Sea is also home to marine mammals. Common seals, and Harbour porpoises can be found along the coasts, at marine installations, and on islands. The very northern North Sea islands like the Shetlands are occasionally home to a larger variety of pinnipeds including bearded, harp, hooded and ringed seals, and even walrus. North Sea cetaceans include various porpoise, dolphin and whale species. common seal harbour porpoisesbearded seal walrus cetaceandolphin

Flora Plant species in the North Sea include species of wrack, among them bladder wrack, knotted wrack, and serrated wrack. Algae, macroalgal, and kelp, such as oarweed and laminaria hyperboria, and species of maerl are found as well. Eelgrass, formerly common in the entirety of the Wadden Sea, was nearly wiped out in the 20 th century by a disease. Similarly, sea grass used to coat huge tracts of ocean floor, but have been damaged by trawling and dredging have diminished its habitat and prevented its return. Invasive Japanese seaweed has spread along the shores of the sea clogging harbours and inlets and has become a nuisance. bladder wrack knotted wrackalgae sea grasskelp

Biodiversity and conservation Flamingos, pelicans, and Great Auk were once found along the southern shores of the North Sea, but went extinct over the 2 nd millennium. Gray whale also resided in the North Sea but were driven to extinction in the Atlantic in the 1600 s Other species have seen dramatic declines in population, though they are still to be found; right whales, sturgeon, shad, rays, skates and salmon among other species were common in the North Sea into the 20 th century, when numbers declined due to overfishing. Other factors like the introduction of non-indigenous species, industrial and agricultural pollution, trawling and dredging, human-induced eutrophication, construction on coastal breeding and feeding grounds, sand gravel extraction, offshore construction, and heavy shipping traffic have also contributed to the decline. The OSPAR commission manages the OSPAR convention to counteract the harmful effects of human activity on wildlife in the North Sea, preserve endangered species, and provide environmental protection. All North Sea border states are signatories of the MARPOL 73/78 Accords which preserves the marine environment by preventing pollution from ships. Germany, Denmark, and the Netherlands also have a trilateral agreement for the protection of the Wadden Sea, or mudflats, which run along the coasts of the three countries on the southern edge of the North Sea. flamingo Great auk grey whalesturgeon

Economy Oil and gas As early as 1859, oil was discovered in onshore areas around the North Sea and natural gas as early as 1910. Oil platform Statfjord A with the flotel Polymarine Test drilling began in 1966 and then, in 1969, Phillips Petroleum Company discovered the Ekofisk oil field distinguished by valuable, low-sulphur oil. Commercial exploitation began in 1971 with tankers and, after 1975, by a pipeline, first to Teesside, England then, after 1977, also to Emden, Germany. The exploitation of the North Sea oil reserves began just before the 1973 oil crisis, and the climb of international oil prices made the large investments needed for extraction much more attractive. Although the production costs are relatively high, the quality of the oil, the political stability of the region, and the nearness of important markets in western Europe has made the North Sea an important oil producing region. The largest single humanitarian catastrophe in the North Sea oil industry was the destruction of the offshore oil platform Piper Alpha in 1988 in which 167 people lost their lives.

Tourism The beaches and coastal waters of the North Sea are popular destinations for tourists. The Belgian, Dutch, German and Danish coasts are especially developed for tourism. The North Sea Trail is a long-distance trail linking seven countries around the North Sea. Windsurfing and sailing are popular sports because of the strong winds. Mudflat hiking, recreational fishing and birdwatching are among other popular activities. The climatic conditions on the North Sea coast are often claimed to be especially healthful. As early as the 19 th century, travellers used their stays on the North Sea coast as curative and restorative vacations. The sea air, temperature, wind, water, and sunshine are counted among the beneficial conditions that are said to activate the body’s defences, improve circulation, strengthen the immune system, and have healing effects on the skin and the respiratory system.

Marine traffic The North Sea is important for marine traffic and its shipping lanes are among the busiest in the world. Major ports are located along its coasts: Rotterdam, the third busiest port in the world, Antwerp and Hamburg, both in the top 25, Bremen/Bremerhaven and Felixstowe, both in the top 30 busiest container seaports, as well as the Port of Bruges-Zeebrugge, Europe’s leading Ro. Ro port. Traffic in the North Sea can be difficult in high density traffic zones so ports regulate traffic and monitor vessels in the North Sea lanes. Fishing boats, oil and gas platforms as well as merchant traffic from Baltic ports share routes on the North Sea. The Dover Strait sees more than 400 vessels a day. The North Sea coasts are home to numerous canals and canal systems to facilitate traffic between and among rivers, artificial harbours, and the sea. The Kiel Canal, connecting the North Sea with the Baltic Sea, is the most heavily used artificial seaway in the world. It saves an average of 250 nautical miles (460 km; 290 mi), instead of the voyage around the Jutland Peninsula. The North Sea Canal connects Amsterdam with the North Sea.