The National Book Awards were started in 1950 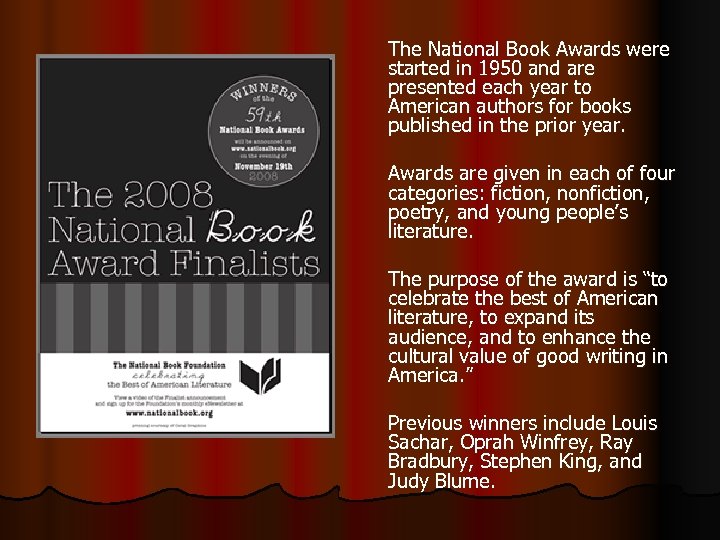 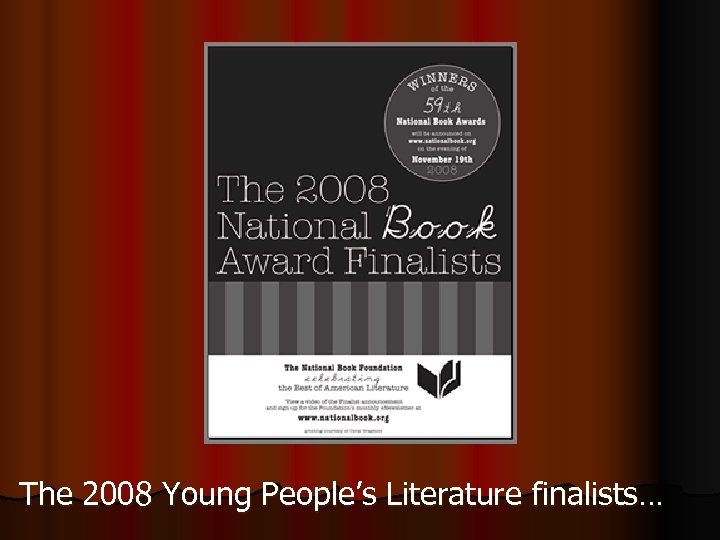 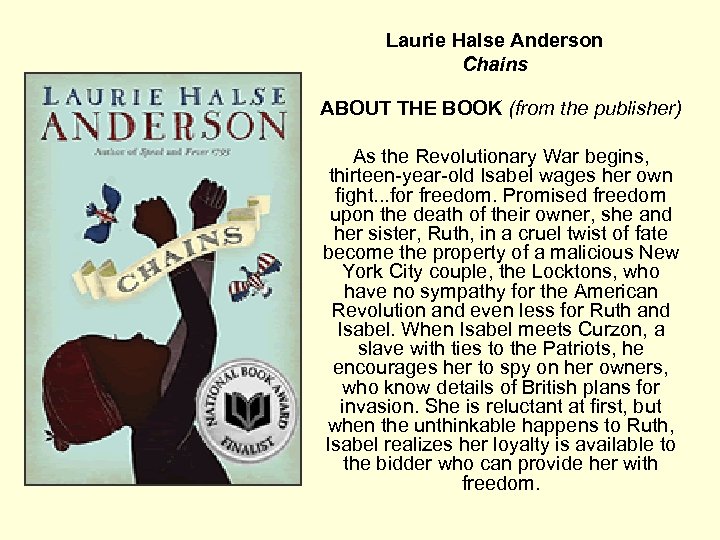 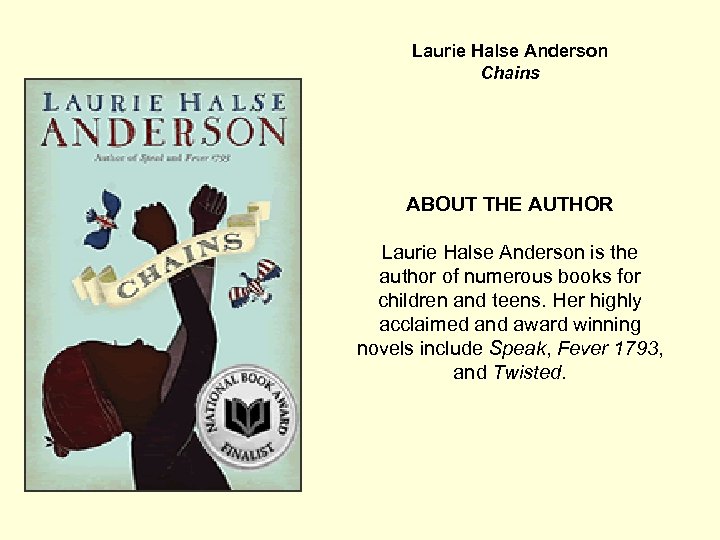 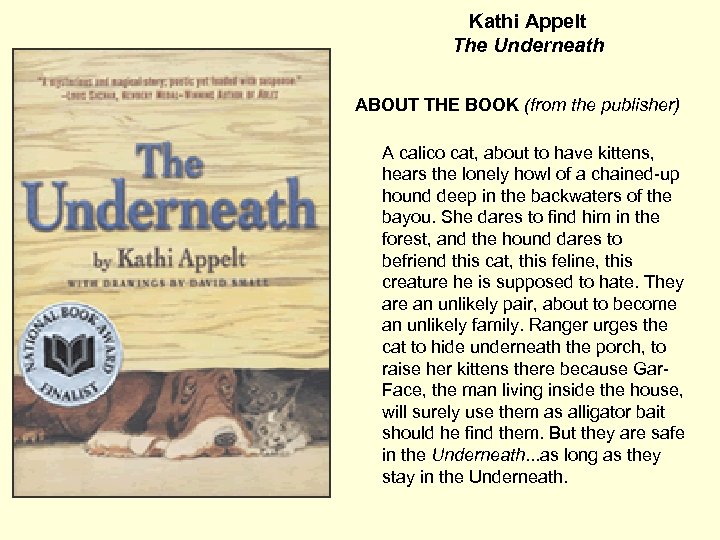 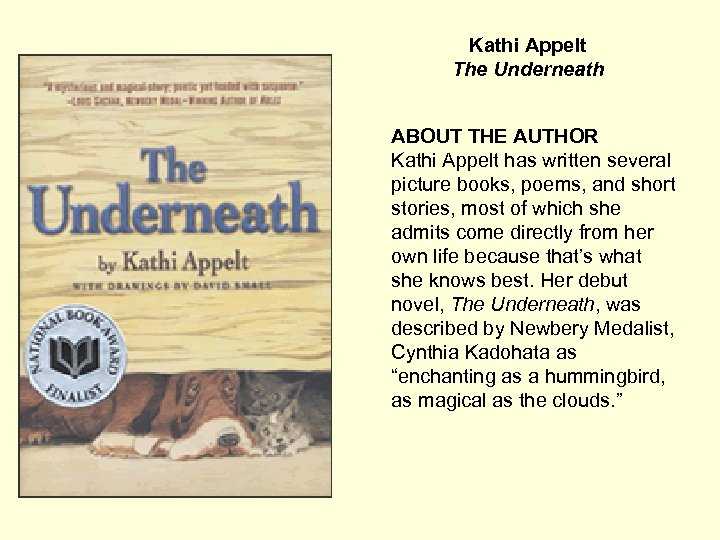 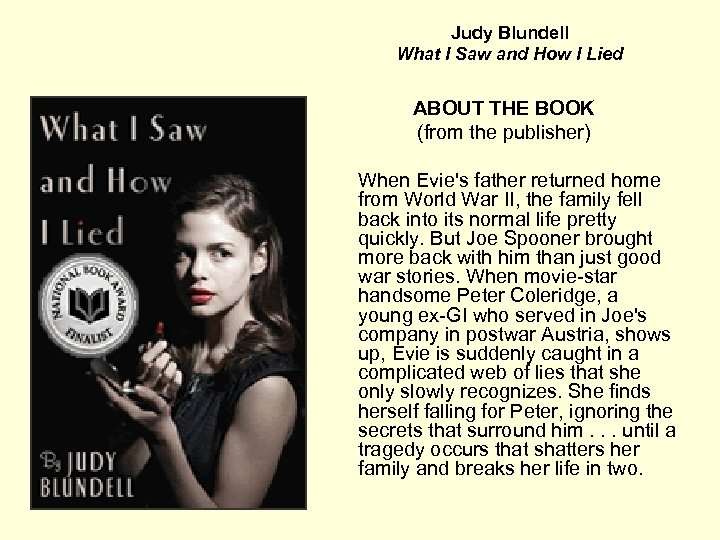 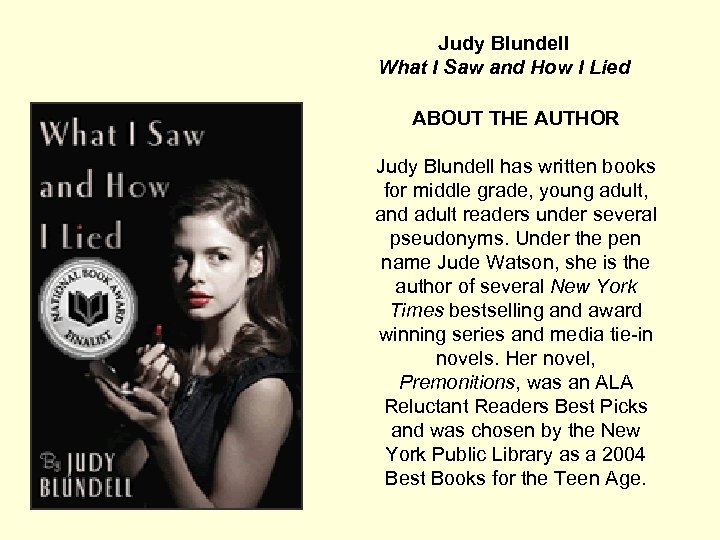 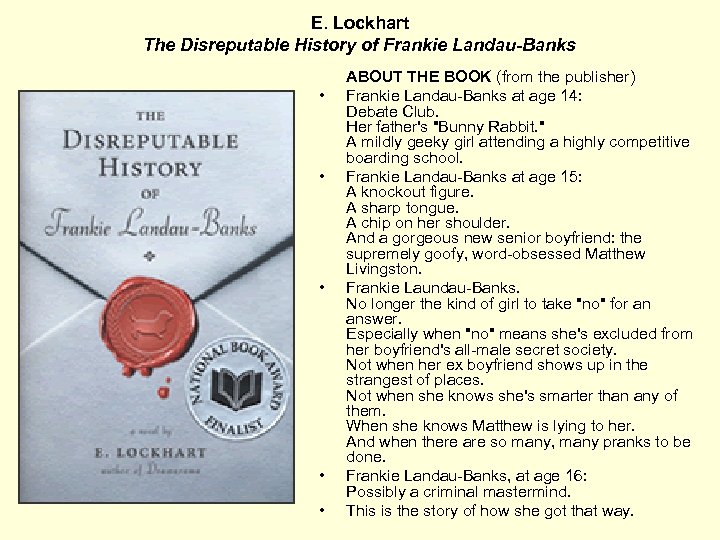 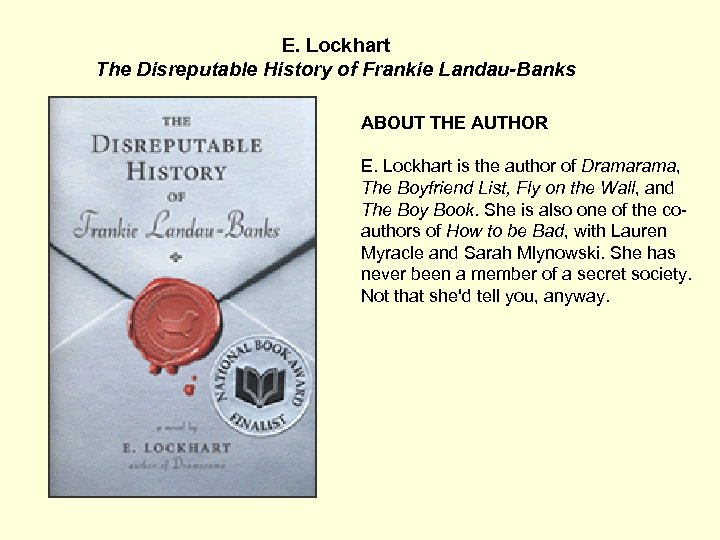 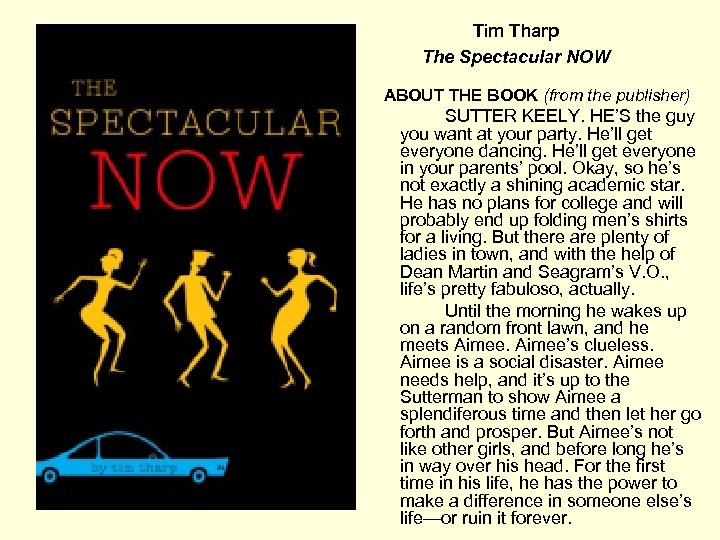 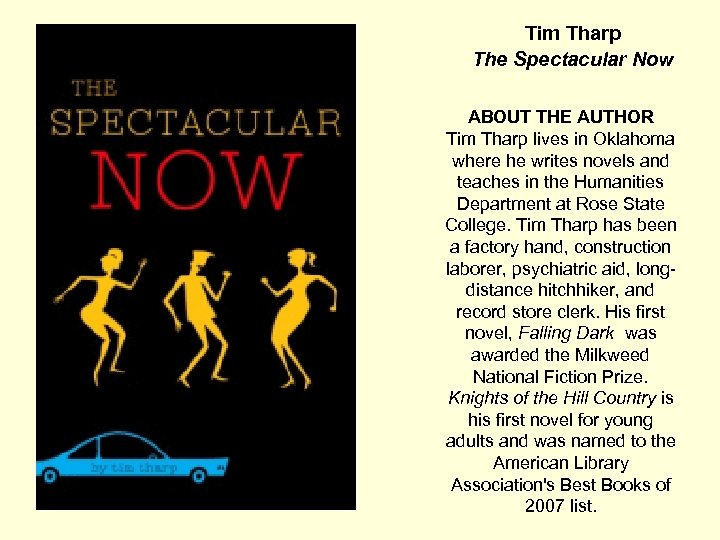 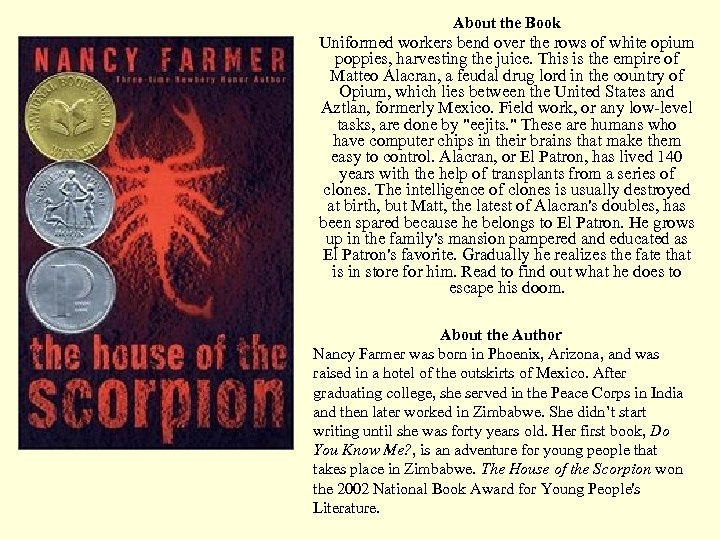 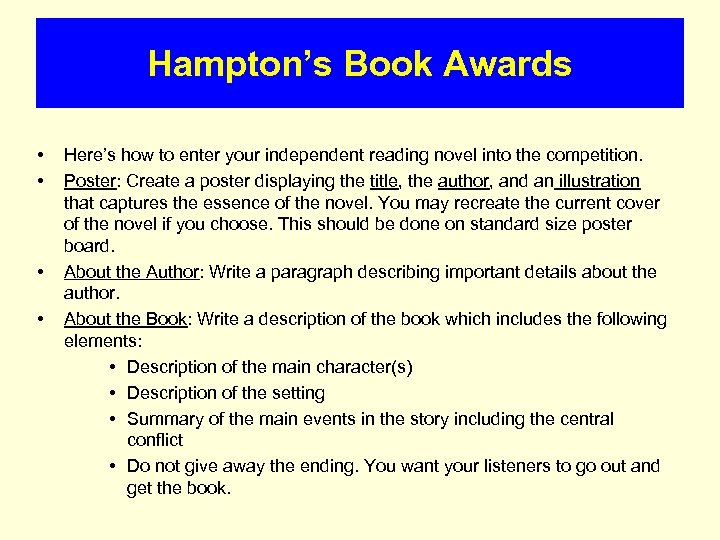 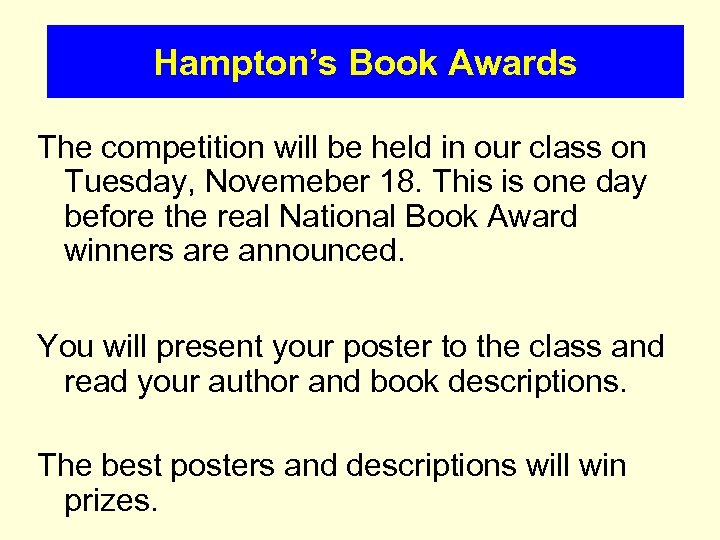 Скачать презентацию The National Book Awards were started in 1950

The National Book Awards were started in 1950 and are presented each year to American authors for books published in the prior year. Awards are given in each of four categories: fiction, nonfiction, poetry, and young people’s literature. The purpose of the award is “to celebrate the best of American literature, to expand its audience, and to enhance the cultural value of good writing in America. ” Previous winners include Louis Sachar, Oprah Winfrey, Ray Bradbury, Stephen King, and Judy Blume.

Laurie Halse Anderson Chains ABOUT THE BOOK (from the publisher) As the Revolutionary War begins, thirteen-year-old Isabel wages her own fight. . . for freedom. Promised freedom upon the death of their owner, she and her sister, Ruth, in a cruel twist of fate become the property of a malicious New York City couple, the Locktons, who have no sympathy for the American Revolution and even less for Ruth and Isabel. When Isabel meets Curzon, a slave with ties to the Patriots, he encourages her to spy on her owners, who know details of British plans for invasion. She is reluctant at first, but when the unthinkable happens to Ruth, Isabel realizes her loyalty is available to the bidder who can provide her with freedom.

Kathi Appelt The Underneath ABOUT THE BOOK (from the publisher) A calico cat, about to have kittens, hears the lonely howl of a chained-up hound deep in the backwaters of the bayou. She dares to find him in the forest, and the hound dares to befriend this cat, this feline, this creature he is supposed to hate. They are an unlikely pair, about to become an unlikely family. Ranger urges the cat to hide underneath the porch, to raise her kittens there because Gar. Face, the man living inside the house, will surely use them as alligator bait should he find them. But they are safe in the Underneath. . . as long as they stay in the Underneath.

Kathi Appelt The Underneath ABOUT THE AUTHOR Kathi Appelt has written several picture books, poems, and short stories, most of which she admits come directly from her own life because that’s what she knows best. Her debut novel, The Underneath, was described by Newbery Medalist, Cynthia Kadohata as “enchanting as a hummingbird, as magical as the clouds. ”

Judy Blundell What I Saw and How I Lied ABOUT THE BOOK (from the publisher) When Evie's father returned home from World War II, the family fell back into its normal life pretty quickly. But Joe Spooner brought more back with him than just good war stories. When movie-star handsome Peter Coleridge, a young ex-GI who served in Joe's company in postwar Austria, shows up, Evie is suddenly caught in a complicated web of lies that she only slowly recognizes. She finds herself falling for Peter, ignoring the secrets that surround him. . . until a tragedy occurs that shatters her family and breaks her life in two.

Judy Blundell What I Saw and How I Lied ABOUT THE AUTHOR Judy Blundell has written books for middle grade, young adult, and adult readers under several pseudonyms. Under the pen name Jude Watson, she is the author of several New York Times bestselling and award winning series and media tie-in novels. Her novel, Premonitions, was an ALA Reluctant Readers Best Picks and was chosen by the New York Public Library as a 2004 Best Books for the Teen Age.

E. Lockhart The Disreputable History of Frankie Landau-Banks • • • ABOUT THE BOOK (from the publisher) Frankie Landau-Banks at age 14: Debate Club. Her father's "Bunny Rabbit. " A mildly geeky girl attending a highly competitive boarding school. Frankie Landau-Banks at age 15: A knockout figure. A sharp tongue. A chip on her shoulder. And a gorgeous new senior boyfriend: the supremely goofy, word-obsessed Matthew Livingston. Frankie Laundau-Banks. No longer the kind of girl to take "no" for an answer. Especially when "no" means she's excluded from her boyfriend's all-male secret society. Not when her ex boyfriend shows up in the strangest of places. Not when she knows she's smarter than any of them. When she knows Matthew is lying to her. And when there are so many, many pranks to be done. Frankie Landau-Banks, at age 16: Possibly a criminal mastermind. This is the story of how she got that way.

E. Lockhart The Disreputable History of Frankie Landau-Banks ABOUT THE AUTHOR E. Lockhart is the author of Drama, The Boyfriend List, Fly on the Wall, and The Boy Book. She is also one of the coauthors of How to be Bad, with Lauren Myracle and Sarah Mlynowski. She has never been a member of a secret society. Not that she'd tell you, anyway.

Tim Tharp The Spectacular NOW ABOUT THE BOOK (from the publisher) SUTTER KEELY. HE’S the guy you want at your party. He’ll get everyone dancing. He’ll get everyone in your parents’ pool. Okay, so he’s not exactly a shining academic star. He has no plans for college and will probably end up folding men’s shirts for a living. But there are plenty of ladies in town, and with the help of Dean Martin and Seagram’s V. O. , life’s pretty fabuloso, actually. Until the morning he wakes up on a random front lawn, and he meets Aimee’s clueless. Aimee is a social disaster. Aimee needs help, and it’s up to the Sutterman to show Aimee a splendiferous time and then let her go forth and prosper. But Aimee’s not like other girls, and before long he’s in way over his head. For the first time in his life, he has the power to make a difference in someone else’s life—or ruin it forever.

Tim Tharp The Spectacular Now ABOUT THE AUTHOR Tim Tharp lives in Oklahoma where he writes novels and teaches in the Humanities Department at Rose State College. Tim Tharp has been a factory hand, construction laborer, psychiatric aid, longdistance hitchhiker, and record store clerk. His first novel, Falling Dark was awarded the Milkweed National Fiction Prize. Knights of the Hill Country is his first novel for young adults and was named to the American Library Association's Best Books of 2007 list.

About the Book Uniformed workers bend over the rows of white opium poppies, harvesting the juice. This is the empire of Matteo Alacran, a feudal drug lord in the country of Opium, which lies between the United States and Aztlan, formerly Mexico. Field work, or any low-level tasks, are done by "eejits. " These are humans who have computer chips in their brains that make them easy to control. Alacran, or El Patron, has lived 140 years with the help of transplants from a series of clones. The intelligence of clones is usually destroyed at birth, but Matt, the latest of Alacran's doubles, has been spared because he belongs to El Patron. He grows up in the family's mansion pampered and educated as El Patron's favorite. Gradually he realizes the fate that is in store for him. Read to find out what he does to escape his doom. About the Author Nancy Farmer was born in Phoenix, Arizona, and was raised in a hotel of the outskirts of Mexico. After graduating college, she served in the Peace Corps in India and then later worked in Zimbabwe. She didn’t start writing until she was forty years old. Her first book, Do You Know Me? , is an adventure for young people that takes place in Zimbabwe. The House of the Scorpion won the 2002 National Book Award for Young People's Literature.

Hampton’s Book Awards • • Here’s how to enter your independent reading novel into the competition. Poster: Create a poster displaying the title, the author, and an illustration that captures the essence of the novel. You may recreate the current cover of the novel if you choose. This should be done on standard size poster board. About the Author: Write a paragraph describing important details about the author. About the Book: Write a description of the book which includes the following elements: • Description of the main character(s) • Description of the setting • Summary of the main events in the story including the central conflict • Do not give away the ending. You want your listeners to go out and get the book.

Hampton’s Book Awards The competition will be held in our class on Tuesday, Novemeber 18. This is one day before the real National Book Award winners are announced. You will present your poster to the class and read your author and book descriptions. The best posters and descriptions will win prizes.

People and their origins The mythology of America

National parks in the UK The UK’s 14