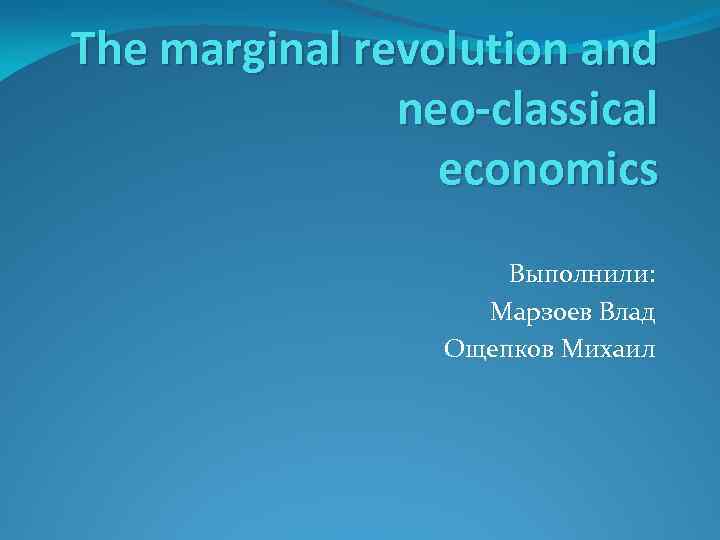 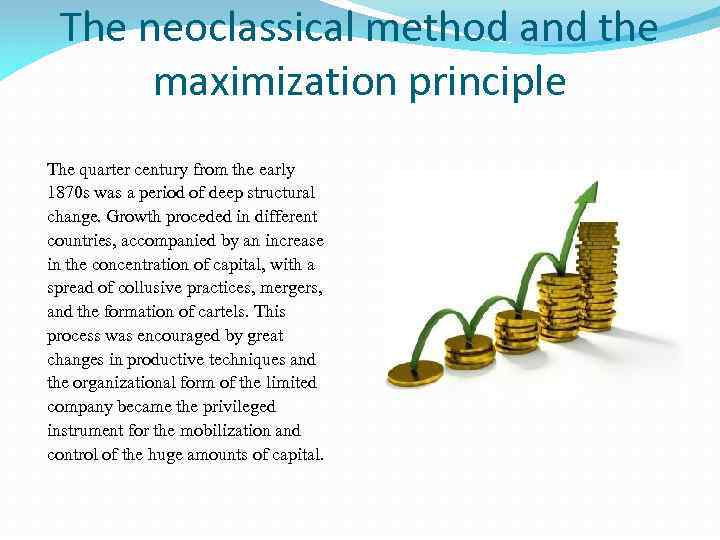 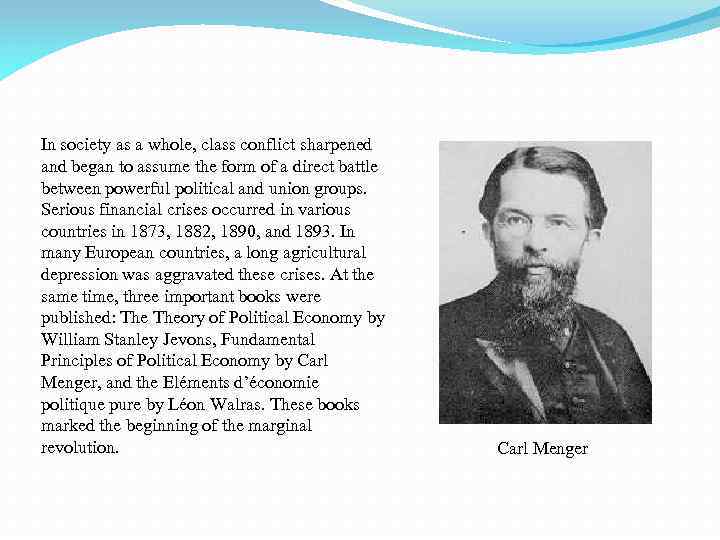 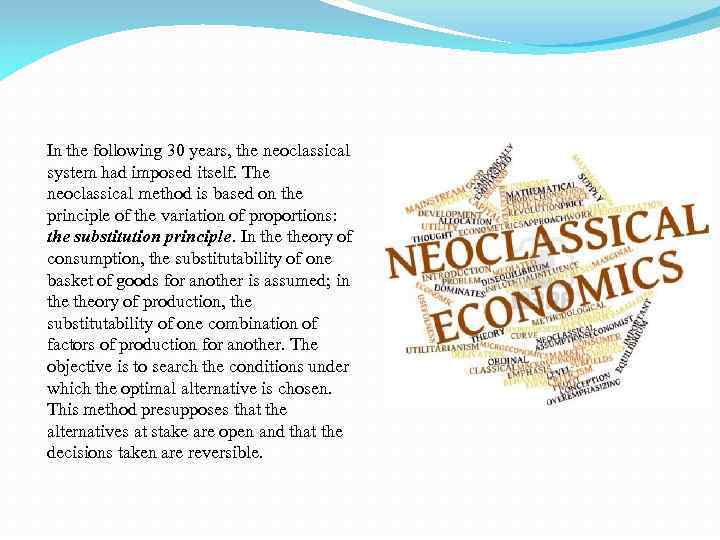 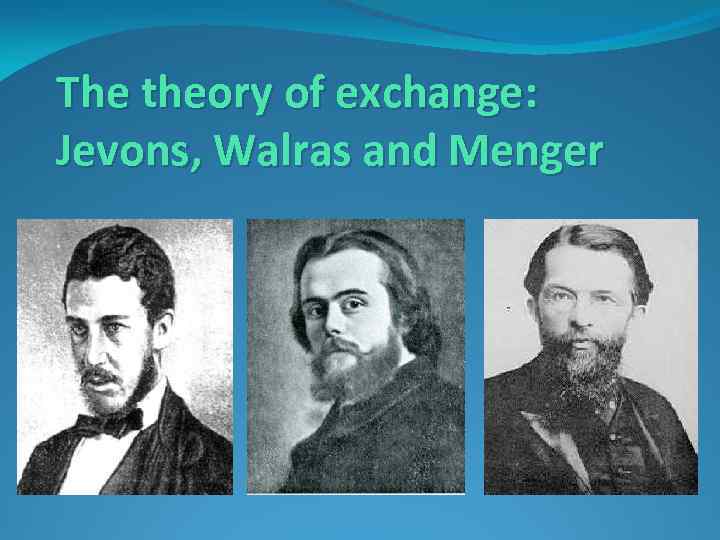 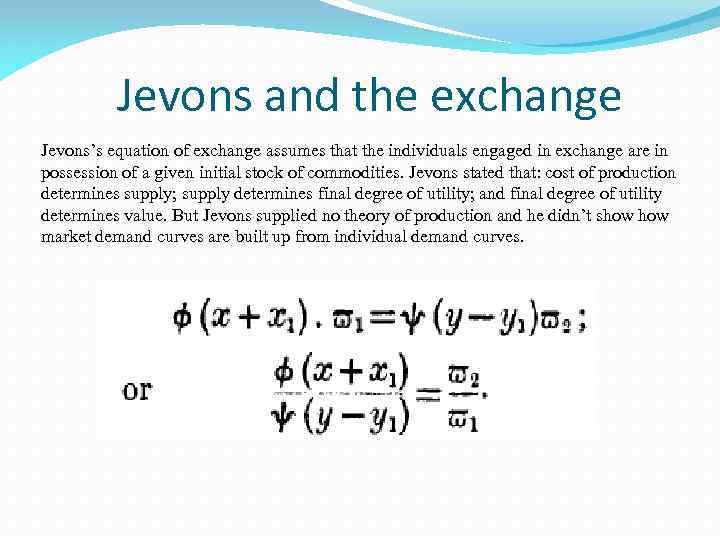 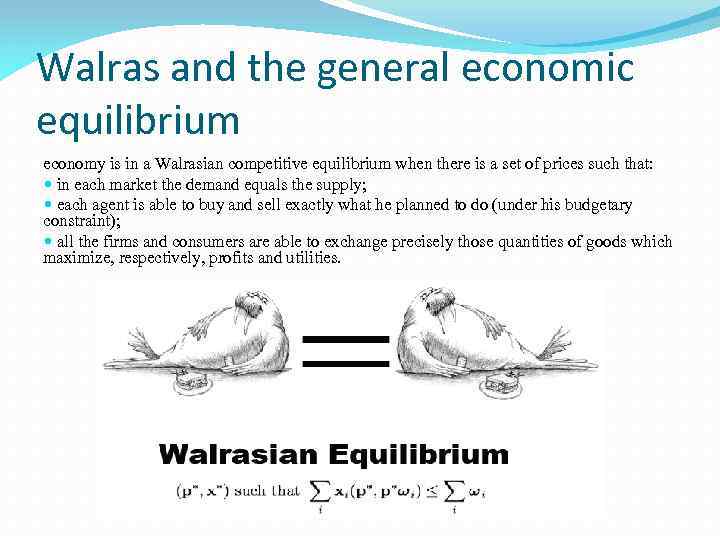 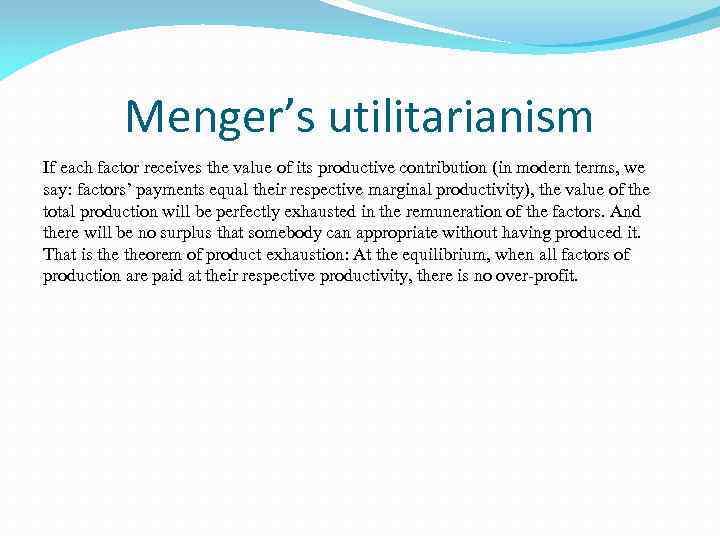 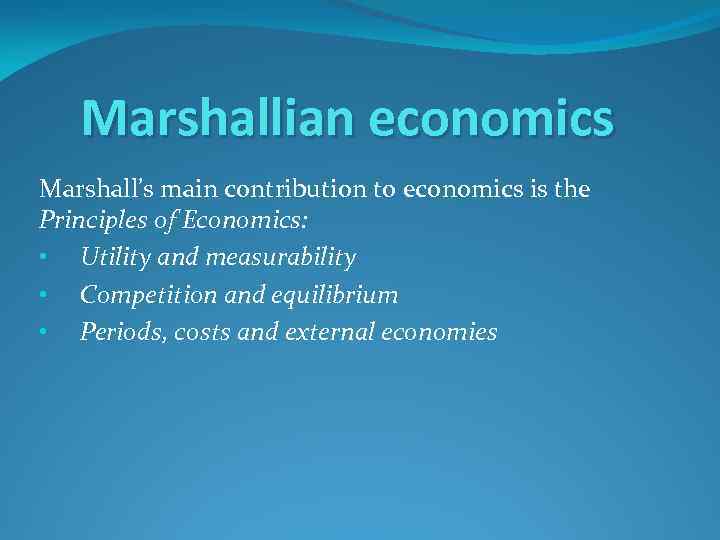 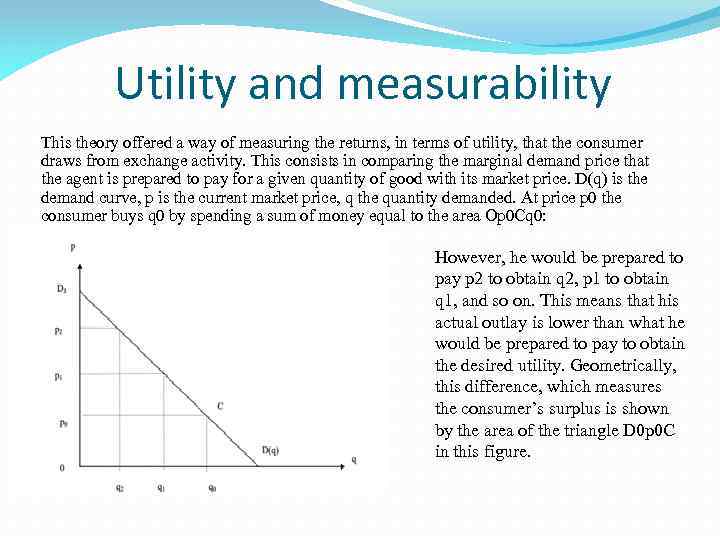 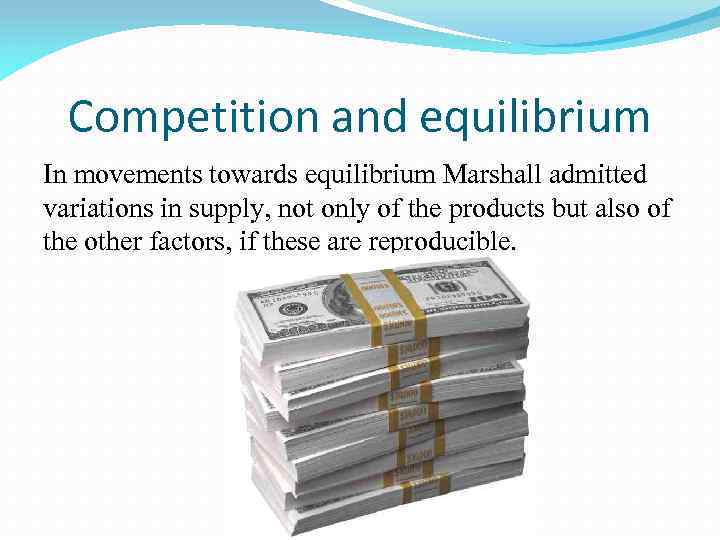 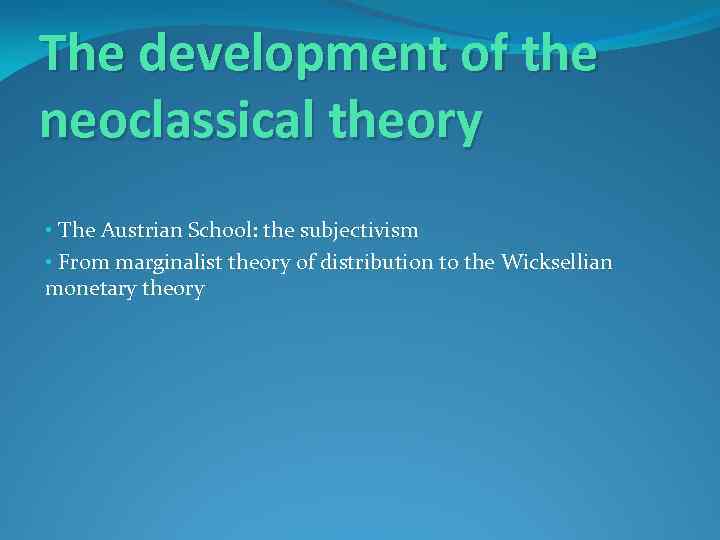 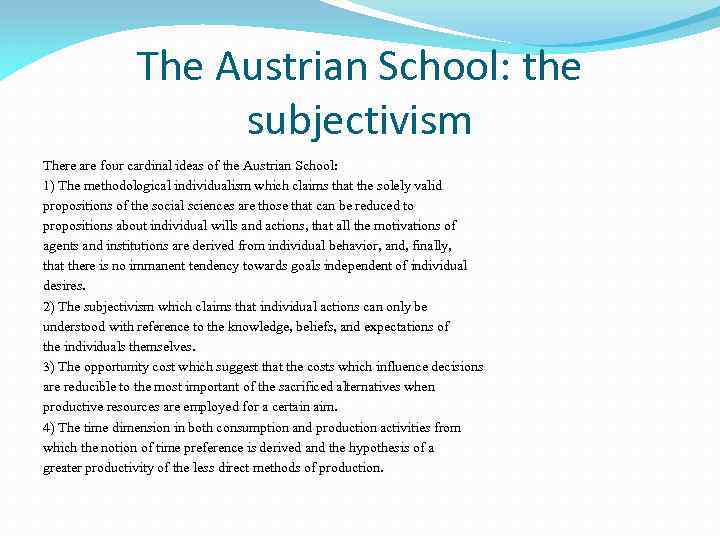 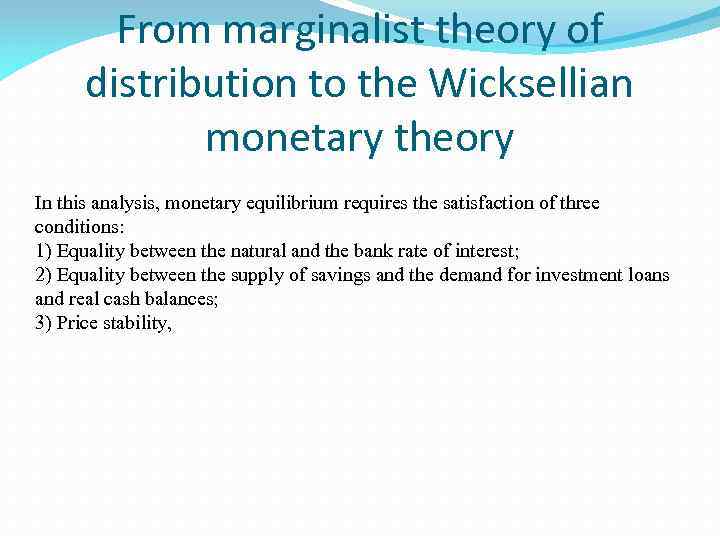 The marginal revolution and neo-classical.pptx

The neoclassical method and the maximization principle The quarter century from the early 1870 s was a period of deep structural change. Growth proceded in different countries, accompanied by an increase in the concentration of capital, with a spread of collusive practices, mergers, and the formation of cartels. This process was encouraged by great changes in productive techniques and the organizational form of the limited company became the privileged instrument for the mobilization and control of the huge amounts of capital.

In society as a whole, class conflict sharpened and began to assume the form of a direct battle between powerful political and union groups. Serious financial crises occurred in various countries in 1873, 1882, 1890, and 1893. In many European countries, a long agricultural depression was aggravated these crises. At the same time, three important books were published: Theory of Political Economy by William Stanley Jevons, Fundamental Principles of Political Economy by Carl Menger, and the Eléments d’économie politique pure by Léon Walras. These books marked the beginning of the marginal revolution. Carl Menger

In the following 30 years, the neoclassical system had imposed itself. The neoclassical method is based on the principle of the variation of proportions: the substitution principle. In theory of consumption, the substitutability of one basket of goods for another is assumed; in theory of production, the substitutability of one combination of factors of production for another. The objective is to search the conditions under which the optimal alternative is chosen. This method presupposes that the alternatives at stake are open and that the decisions taken are reversible.

The theory of exchange: Jevons, Walras and Menger

Jevons and the exchange Jevons’s equation of exchange assumes that the individuals engaged in exchange are in possession of a given initial stock of commodities. Jevons stated that: cost of production determines supply; supply determines final degree of utility; and final degree of utility determines value. But Jevons supplied no theory of production and he didn’t show market demand curves are built up from individual demand curves.

Walras and the general economic equilibrium economy is in a Walrasian competitive equilibrium when there is a set of prices such that: in each market the demand equals the supply; each agent is able to buy and sell exactly what he planned to do (under his budgetary constraint); all the firms and consumers are able to exchange precisely those quantities of goods which maximize, respectively, profits and utilities.

Menger’s utilitarianism If each factor receives the value of its productive contribution (in modern terms, we say: factors’ payments equal their respective marginal productivity), the value of the total production will be perfectly exhausted in the remuneration of the factors. And there will be no surplus that somebody can appropriate without having produced it. That is theorem of product exhaustion: At the equilibrium, when all factors of production are paid at their respective productivity, there is no over-profit.

Marshallian economics Marshall’s main contribution to economics is the Principles of Economics: • Utility and measurability • Competition and equilibrium • Periods, costs and external economies

Utility and measurability This theory offered a way of measuring the returns, in terms of utility, that the consumer draws from exchange activity. This consists in comparing the marginal demand price that the agent is prepared to pay for a given quantity of good with its market price. D(q) is the demand curve, p is the current market price, q the quantity demanded. At price p 0 the consumer buys q 0 by spending a sum of money equal to the area Op 0 Cq 0: However, he would be prepared to pay p 2 to obtain q 2, p 1 to obtain q 1, and so on. This means that his actual outlay is lower than what he would be prepared to pay to obtain the desired utility. Geometrically, this difference, which measures the consumer’s surplus is shown by the area of the triangle D 0 p 0 C in this figure.

Competition and equilibrium In movements towards equilibrium Marshall admitted variations in supply, not only of the products but also of the other factors, if these are reproducible.

The development of the neoclassical theory • The Austrian School: the subjectivism • From marginalist theory of distribution to the Wicksellian monetary theory

The Austrian School: the subjectivism There are four cardinal ideas of the Austrian School: 1) The methodological individualism which claims that the solely valid propositions of the social sciences are those that can be reduced to propositions about individual wills and actions, that all the motivations of agents and institutions are derived from individual behavior, and, finally, that there is no immanent tendency towards goals independent of individual desires. 2) The subjectivism which claims that individual actions can only be understood with reference to the knowledge, beliefs, and expectations of the individuals themselves. 3) The opportunity cost which suggest that the costs which influence decisions are reducible to the most important of the sacrificed alternatives when productive resources are employed for a certain aim. 4) The time dimension in both consumption and production activities from which the notion of time preference is derived and the hypothesis of a greater productivity of the less direct methods of production.

From marginalist theory of distribution to the Wicksellian monetary theory In this analysis, monetary equilibrium requires the satisfaction of three conditions: 1) Equality between the natural and the bank rate of interest; 2) Equality between the supply of savings and the demand for investment loans and real cash balances; 3) Price stability,