The Lord Looketh on the Heart Khinckley 1 yahoo 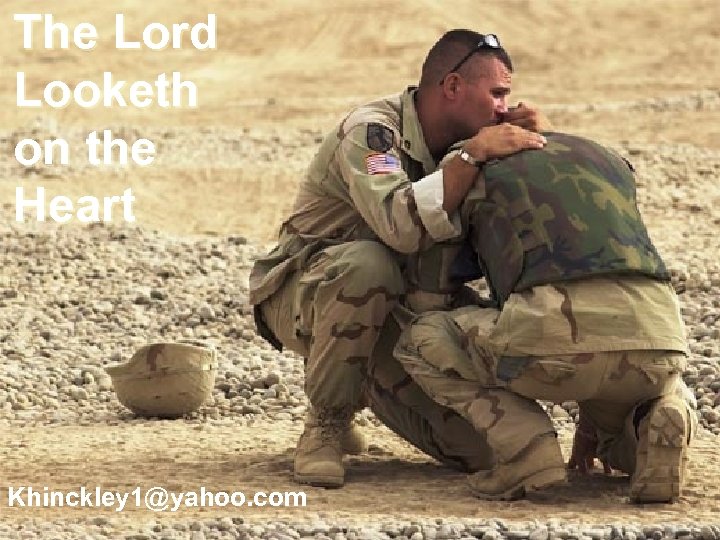 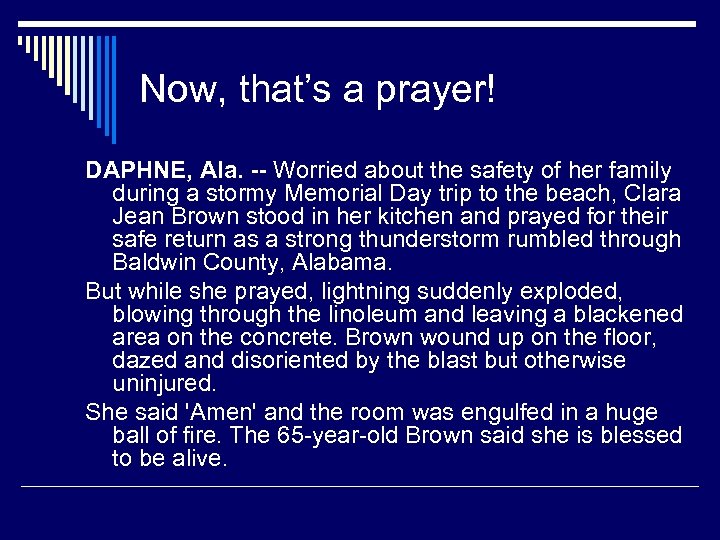 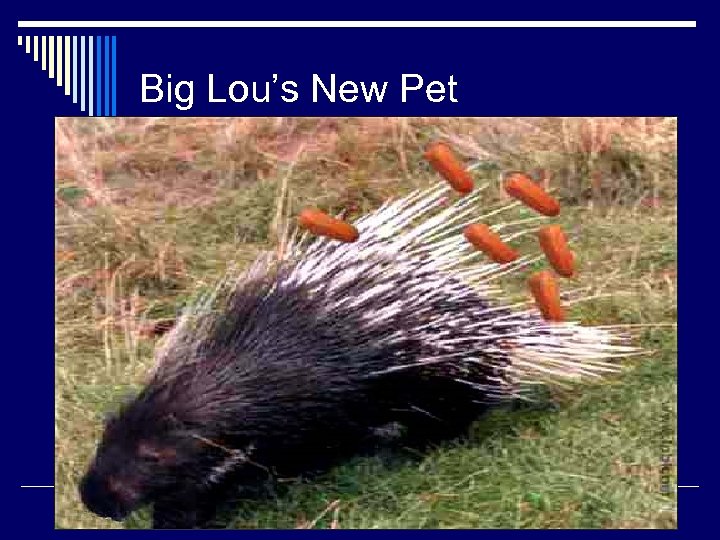 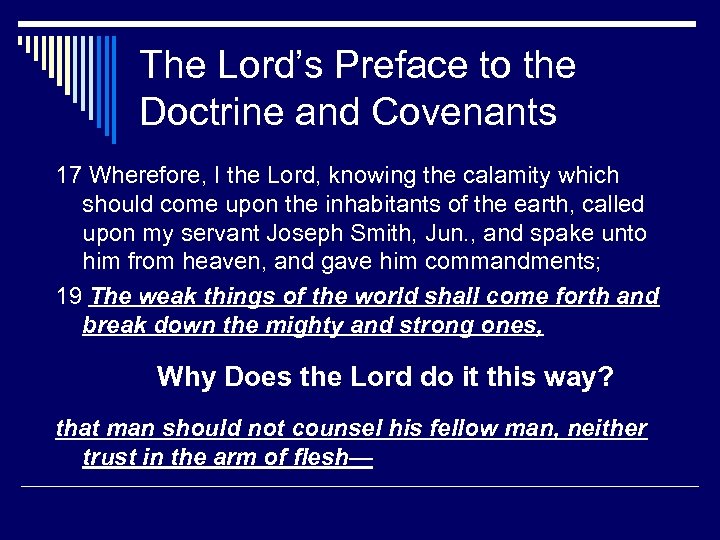 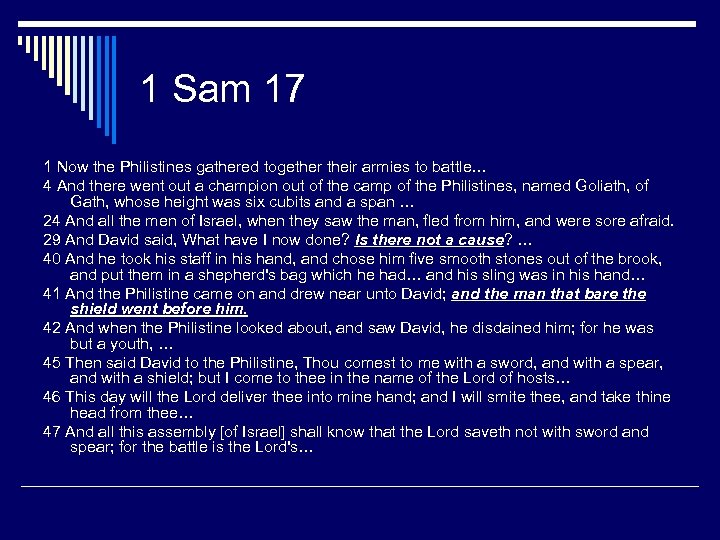 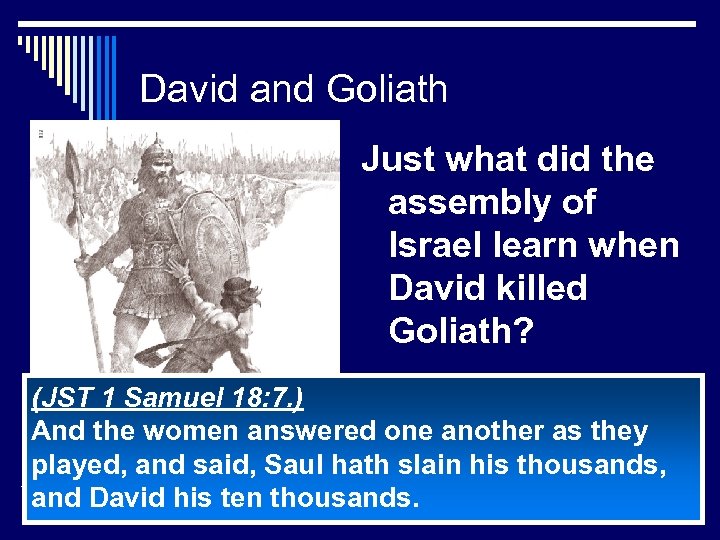 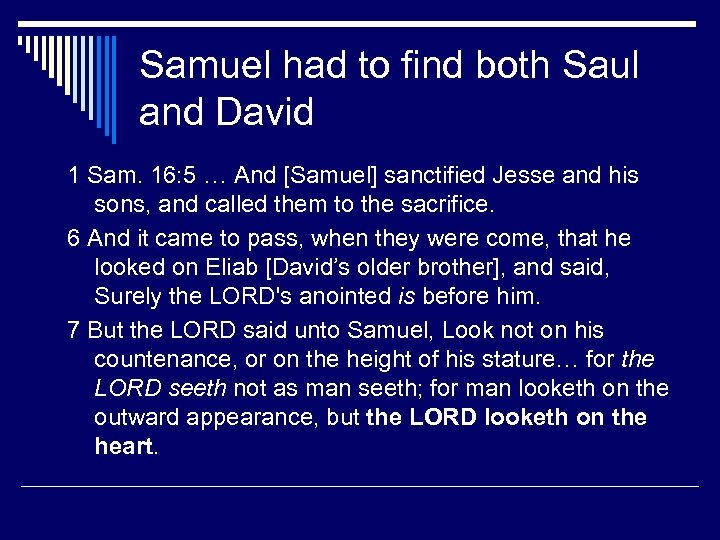 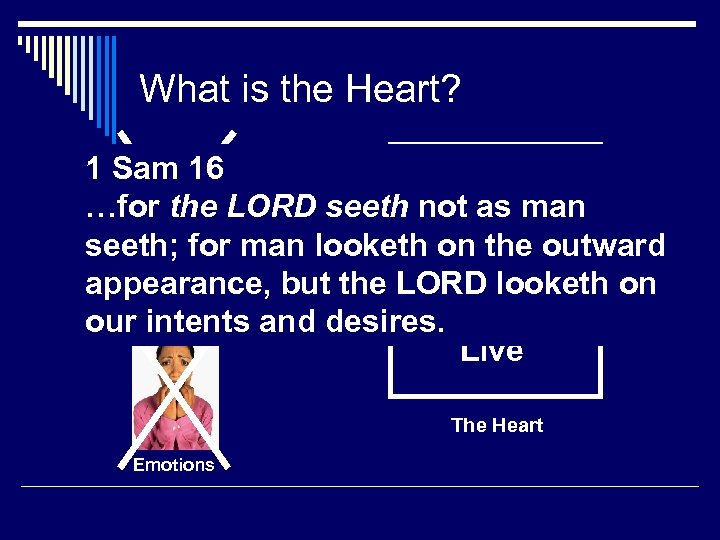 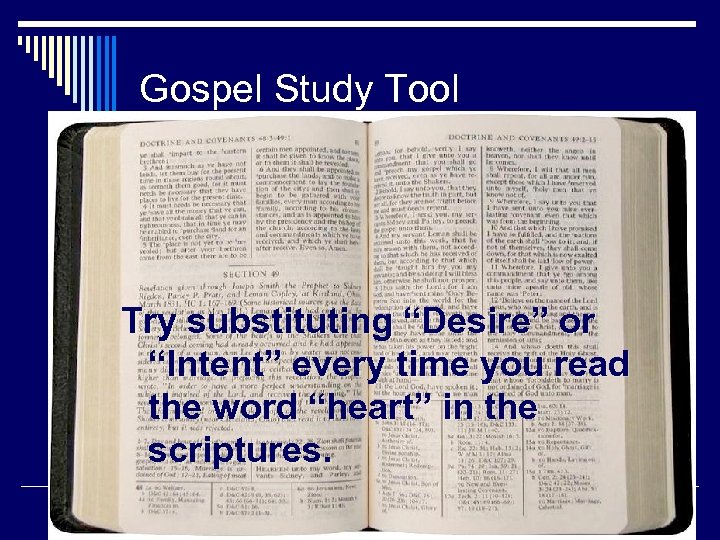 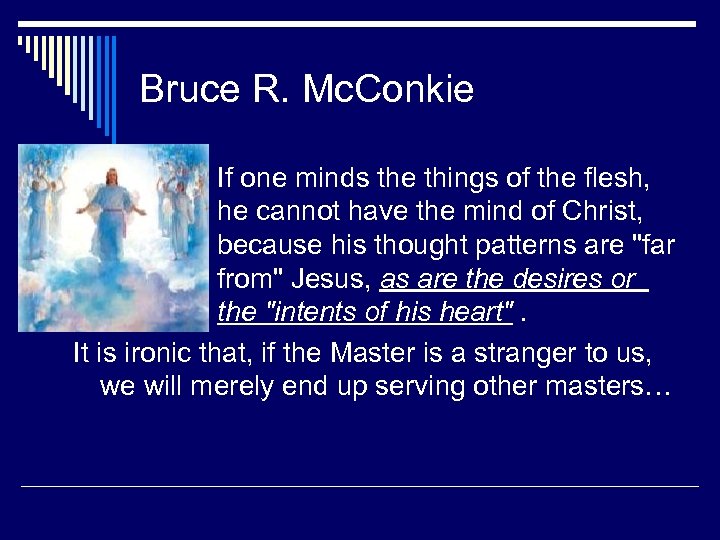 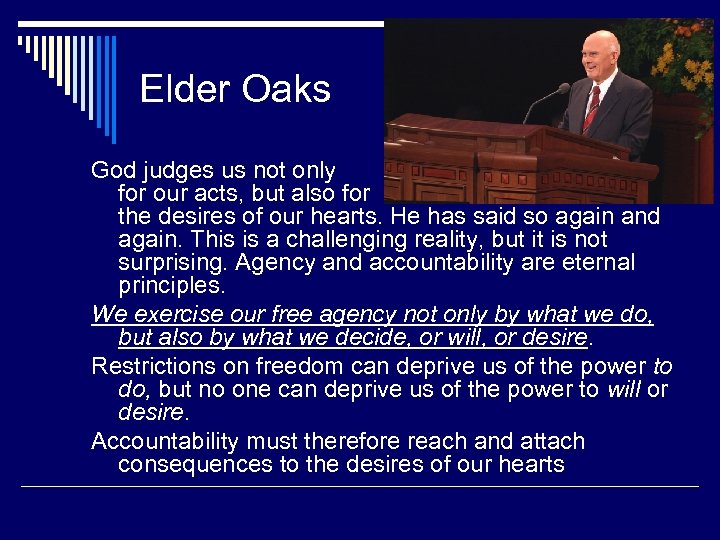 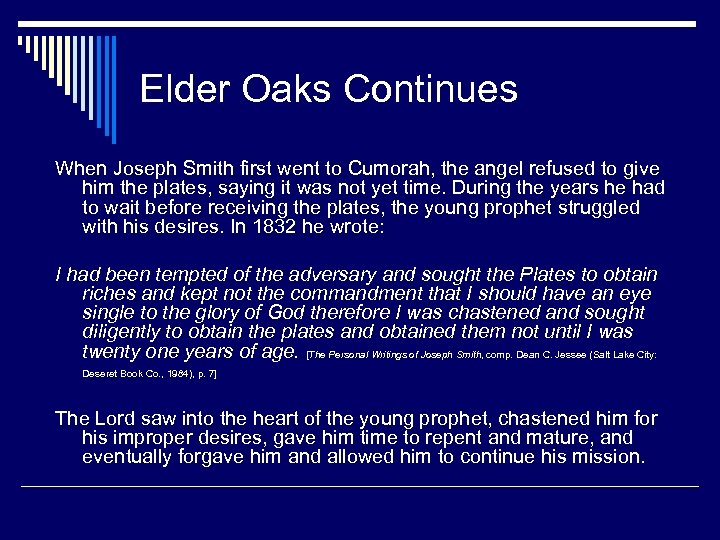 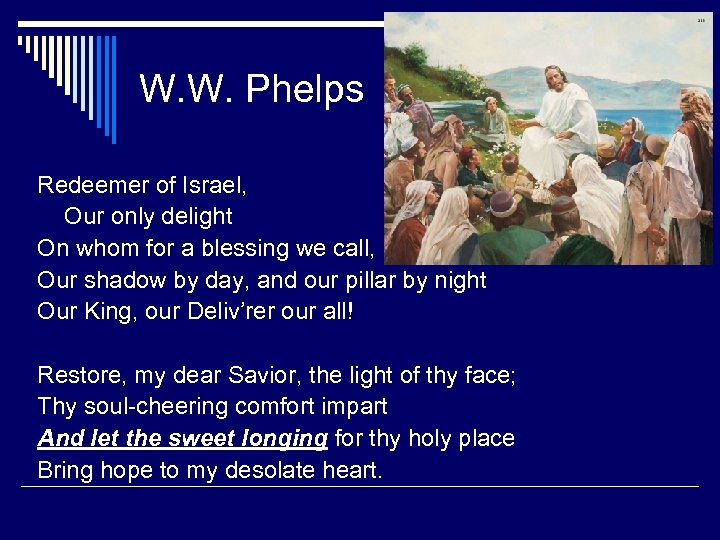 Скачать презентацию The Lord Looketh on the Heart Khinckley 1 yahoo

The Lord Looketh on the Heart Khinckley [email protected] com

Now, that’s a prayer! DAPHNE, Ala. -- Worried about the safety of her family during a stormy Memorial Day trip to the beach, Clara Jean Brown stood in her kitchen and prayed for their safe return as a strong thunderstorm rumbled through Baldwin County, Alabama. But while she prayed, lightning suddenly exploded, blowing through the linoleum and leaving a blackened area on the concrete. Brown wound up on the floor, dazed and disoriented by the blast but otherwise uninjured. She said 'Amen' and the room was engulfed in a huge ball of fire. The 65 -year-old Brown said she is blessed to be alive.

The Lord’s Preface to the Doctrine and Covenants 17 Wherefore, I the Lord, knowing the calamity which should come upon the inhabitants of the earth, called upon my servant Joseph Smith, Jun. , and spake unto him from heaven, and gave him commandments; 19 The weak things of the world shall come forth and break down the mighty and strong ones, Why Does the Lord do it this way? that man should not counsel his fellow man, neither trust in the arm of flesh—

1 Sam 17 1 Now the Philistines gathered together their armies to battle… 4 And there went out a champion out of the camp of the Philistines, named Goliath, of Gath, whose height was six cubits and a span … 24 And all the men of Israel, when they saw the man, fled from him, and were sore afraid. 29 And David said, What have I now done? Is there not a cause? … 40 And he took his staff in his hand, and chose him five smooth stones out of the brook, and put them in a shepherd's bag which he had… and his sling was in his hand… 41 And the Philistine came on and drew near unto David; and the man that bare the shield went before him. 42 And when the Philistine looked about, and saw David, he disdained him; for he was but a youth, … 45 Then said David to the Philistine, Thou comest to me with a sword, and with a spear, and with a shield; but I come to thee in the name of the Lord of hosts… 46 This day will the Lord deliver thee into mine hand; and I will smite thee, and take thine head from thee… 47 And all this assembly [of Israel] shall know that the Lord saveth not with sword and spear; for the battle is the Lord's…

David and Goliath Just what did the assembly of Israel learn when David killed Goliath? (JST 1 Samuel 18: 7. ) And the women answered one another as they played, and said, Saul hath slain his thousands, and David his ten thousands.

Samuel had to find both Saul and David 1 Sam. 16: 5 … And [Samuel] sanctified Jesse and his sons, and called them to the sacrifice. 6 And it came to pass, when they were come, that he looked on Eliab [David’s older brother], and said, Surely the LORD's anointed is before him. 7 But the LORD said unto Samuel, Look not on his countenance, or on the height of his stature… for the LORD seeth not as man seeth; for man looketh on the outward appearance, but the LORD looketh on the heart.

What is the Heart? 1 Sam 16 …for the LORD seeth The as man not Place where seeth; for man looketh on the outward Our Thoughts appearance, but the LORD looketh on Desires our intents the heart. and desires. Live The Heart Emotions

Gospel Study Tool Try substituting “Desire” or “Intent” every time you read the word “heart” in the scriptures.

Bruce R. Mc. Conkie If one minds the things of the flesh, he cannot have the mind of Christ, because his thought patterns are "far from" Jesus, as are the desires or the "intents of his heart". It is ironic that, if the Master is a stranger to us, we will merely end up serving other masters…

Elder Oaks God judges us not only for our acts, but also for the desires of our hearts. He has said so again and again. This is a challenging reality, but it is not surprising. Agency and accountability are eternal principles. We exercise our free agency not only by what we do, but also by what we decide, or will, or desire. Restrictions on freedom can deprive us of the power to do, but no one can deprive us of the power to will or desire. Accountability must therefore reach and attach consequences to the desires of our hearts

Elder Oaks Continues When Joseph Smith first went to Cumorah, the angel refused to give him the plates, saying it was not yet time. During the years he had to wait before receiving the plates, the young prophet struggled with his desires. In 1832 he wrote: I had been tempted of the adversary and sought the Plates to obtain riches and kept not the commandment that I should have an eye single to the glory of God therefore I was chastened and sought diligently to obtain the plates and obtained them not until I was twenty one years of age. [The Personal Writings of Joseph Smith, comp. Dean C. Jessee (Salt Lake City: Deseret Book Co. , 1984), p. 7] The Lord saw into the heart of the young prophet, chastened him for his improper desires, gave him time to repent and mature, and eventually forgave him and allowed him to continue his mission.

W. W. Phelps Redeemer of Israel, Our only delight On whom for a blessing we call, Our shadow by day, and our pillar by night Our King, our Deliv’rer our all! Restore, my dear Savior, the light of thy face; Thy soul-cheering comfort impart And let the sweet longing for thy holy place Bring hope to my desolate heart.