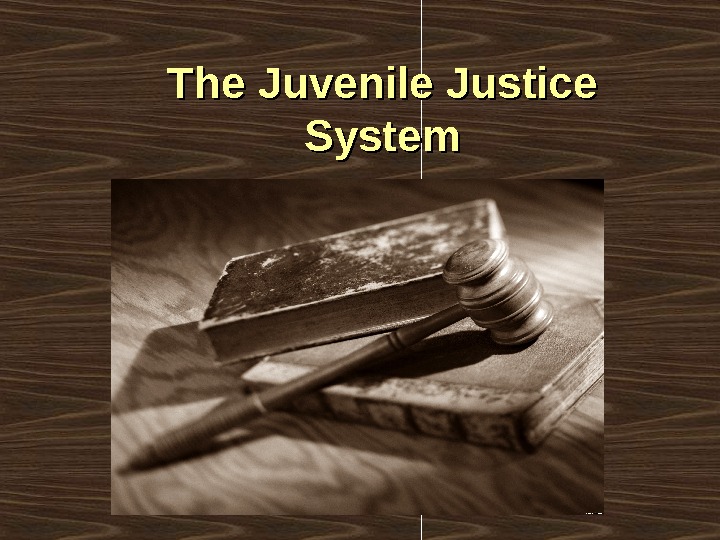 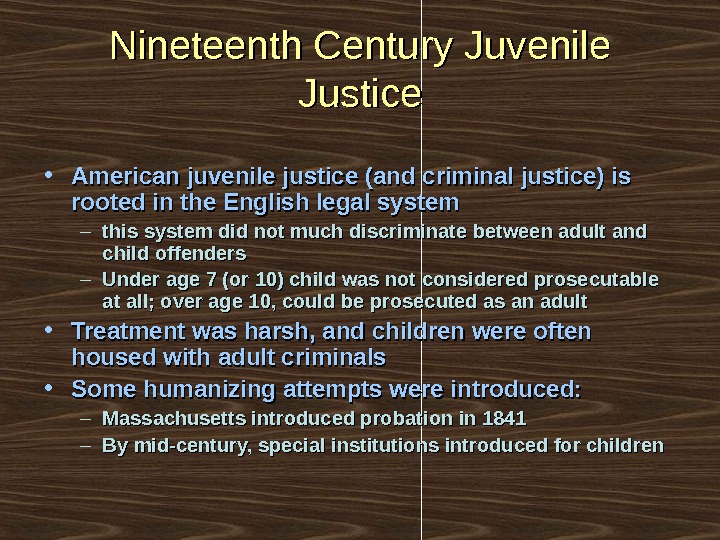 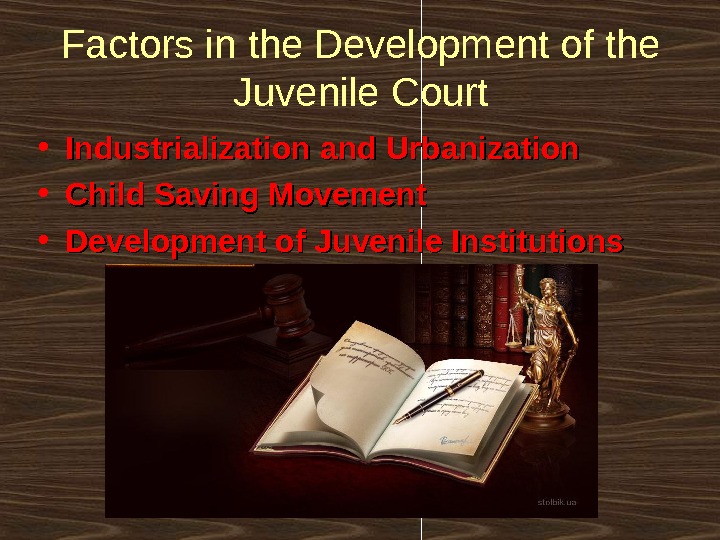 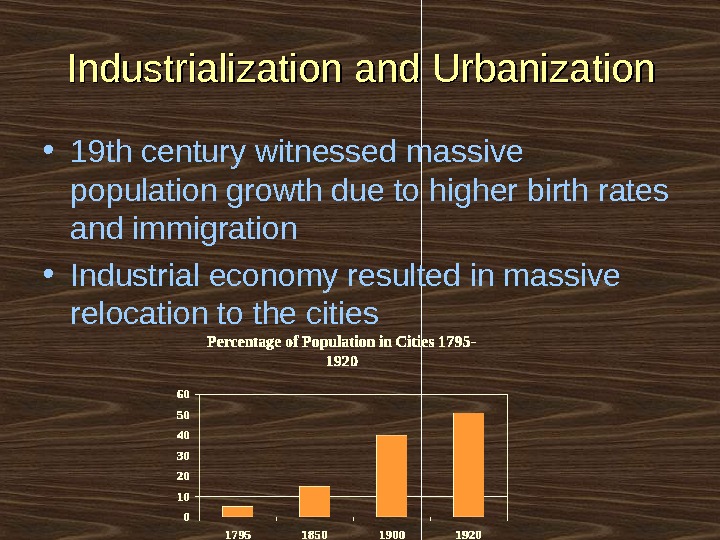 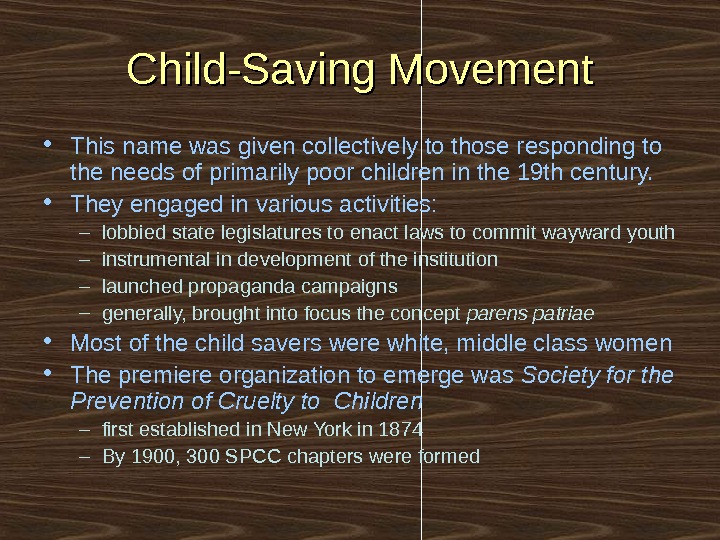 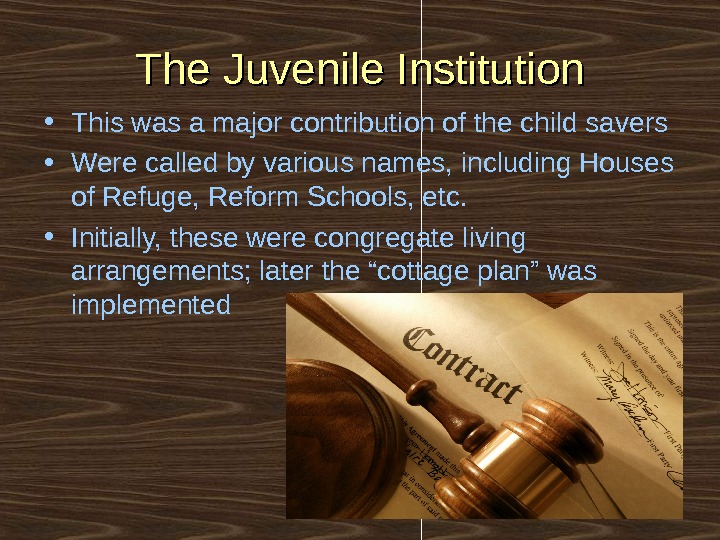 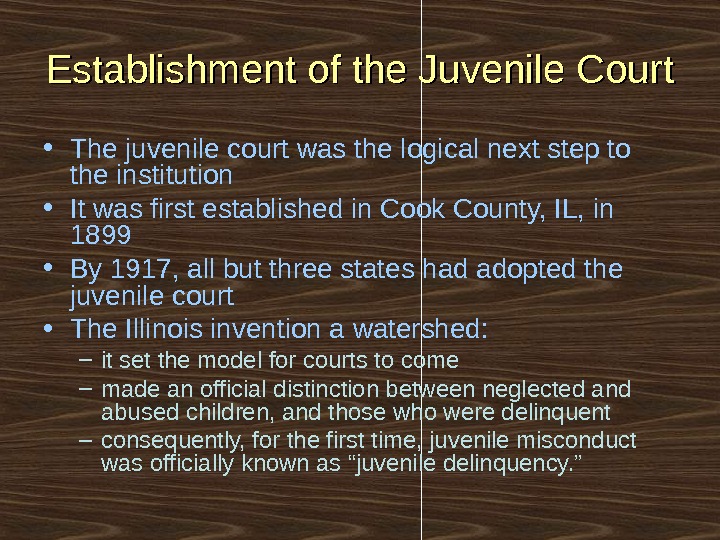 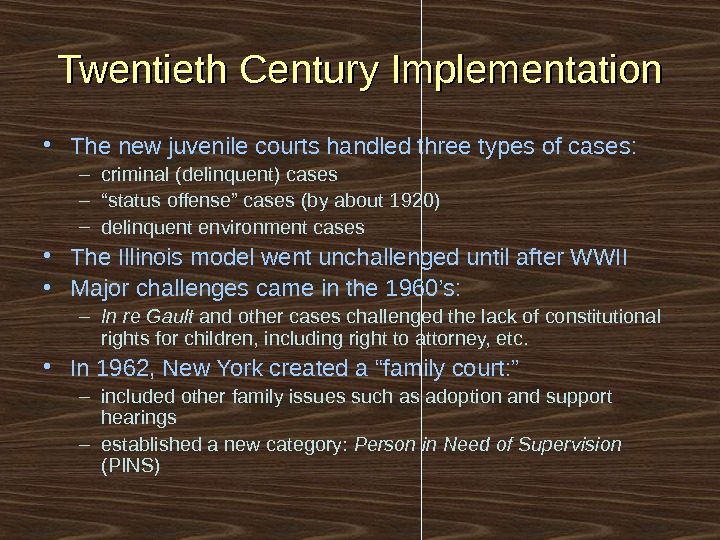 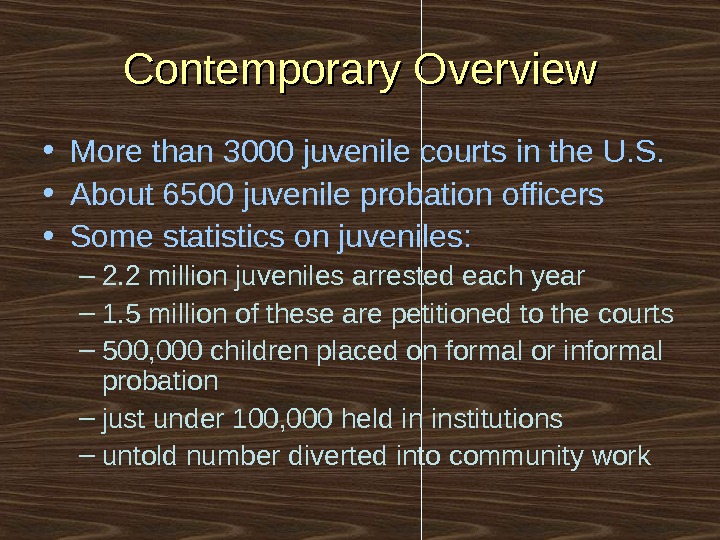 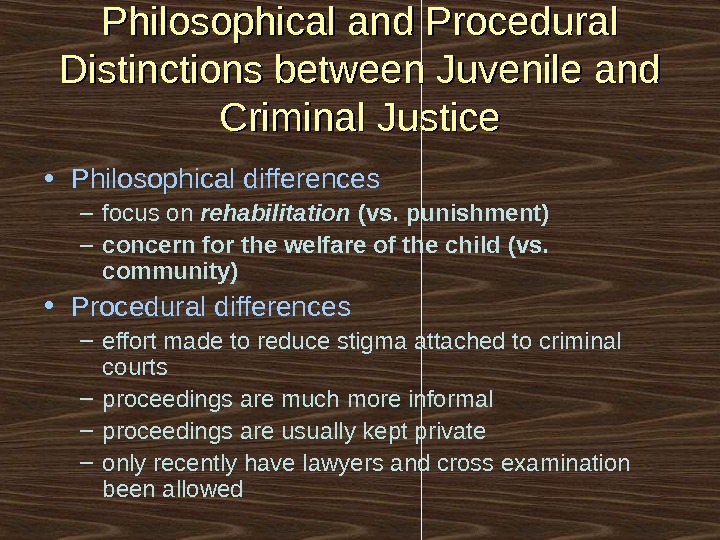 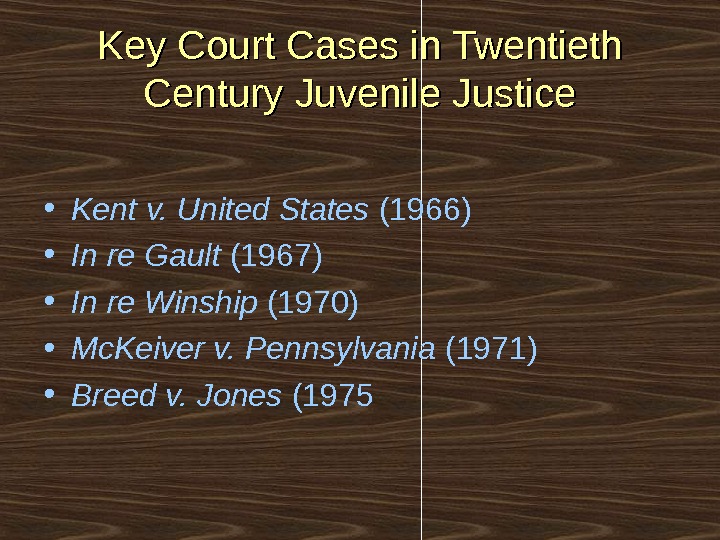 Nineteenth Century Juvenile Justice • American juvenile justice (and criminal justice) is rooted in the English legal system – this system did not much discriminate between adult and child offenders – Under age 7 (or 10) child was not considered prosecutable at all; over age 10, could be prosecuted as an adult • Treatment was harsh, and children were often housed with adult criminals • Some humanizing attempts were introduced: – Massachusetts introduced probation in 1841 – By mid-century, special institutions introduced for children

Child-Saving Movement • This name was given collectively to those responding to the needs of primarily poor children in the 19 th century. • They engaged in various activities: – lobbied state legislatures to enact laws to commit wayward youth – instrumental in development of the institution – launched propaganda campaigns – generally, brought into focus the concept parens patriae • Most of the child savers were white, middle class women • The premiere organization to emerge was Society for the Prevention of Cruelty to Children – first established in New York in 1874 – By 1900, 300 SPCC chapters were formed

The Juvenile Institution • This was a major contribution of the child savers • Were called by various names, including Houses of Refuge, Reform Schools, etc. • Initially, these were congregate living arrangements; later the “cottage plan” was implemented

Establishment of the Juvenile Court • The juvenile court was the logical next step to the institution • It was first established in Cook County, IL, in 1899 • By 1917, all but three states had adopted the juvenile court • The Illinois invention a watershed: – it set the model for courts to come – made an official distinction between neglected and abused children, and those who were delinquent – consequently, for the first time, juvenile misconduct was officially known as “juvenile delinquency. ”

Twentieth Century Implementation • The new juvenile courts handled three types of cases: – criminal (delinquent) cases – “ status offense” cases (by about 1920) – delinquent environment cases • The Illinois model went unchallenged until after WWII • Major challenges came in the 1960’s: – In re Gault and other cases challenged the lack of constitutional rights for children, including right to attorney, etc. • In 1962, New York created a “family court: ” – included other family issues such as adoption and support hearings – established a new category: Person in Need of Supervision (PINS)

Contemporary Overview • More than 3000 juvenile courts in the U. S. • About 6500 juvenile probation officers • Some statistics on juveniles: – 2. 2 million juveniles arrested each year – 1. 5 million of these are petitioned to the courts – 500, 000 children placed on formal or informal probation – just under 100, 000 held in institutions – untold number diverted into community work

Philosophical and Procedural Distinctions between Juvenile and Criminal Justice • Philosophical differences – focus on rehabilitation (vs. punishment) – concern for the welfare of the child (vs. community) • Procedural differences – effort made to reduce stigma attached to criminal courts – proceedings are much more informal – proceedings are usually kept private – only recently have lawyers and cross examination been allowed