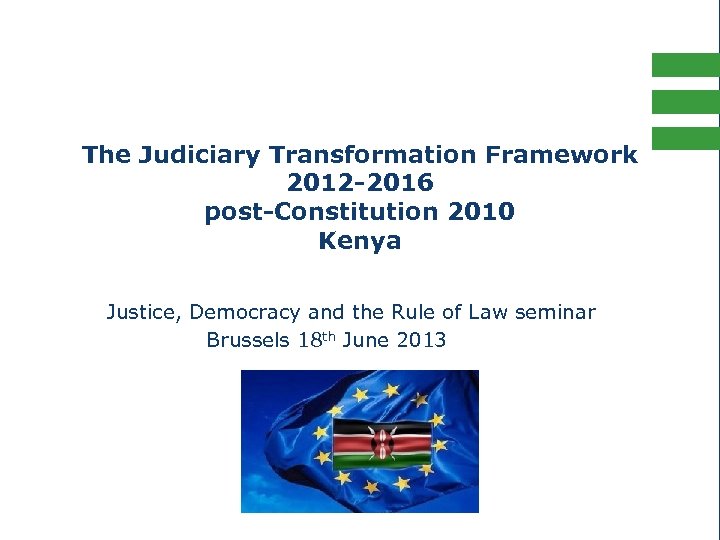 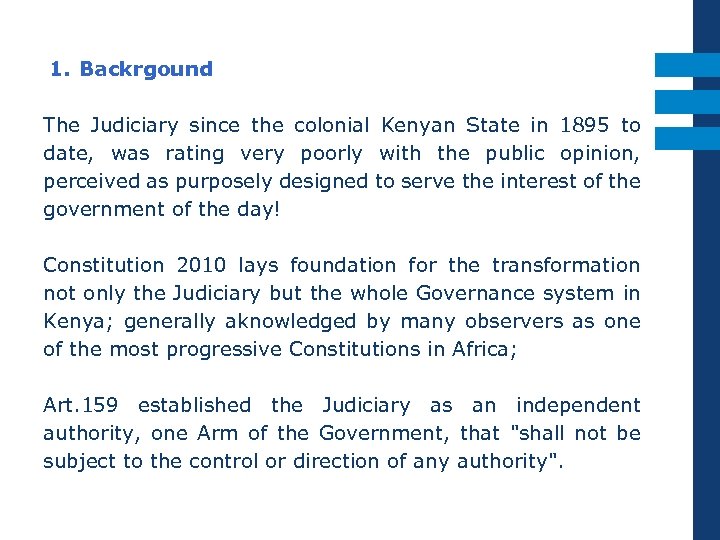 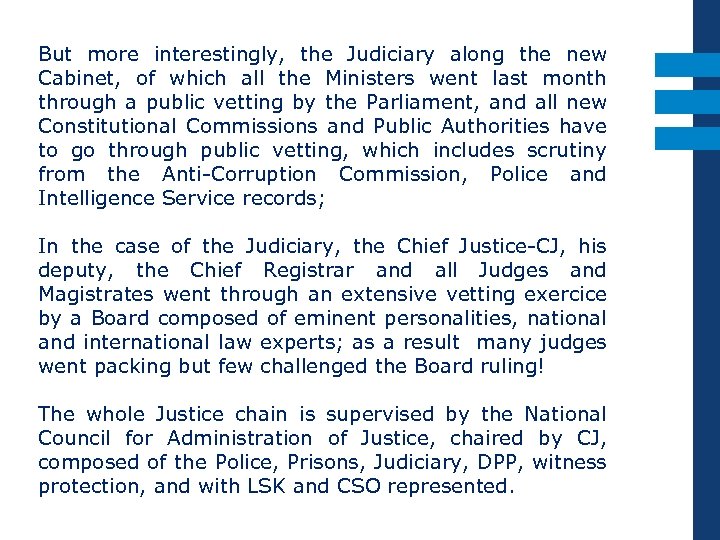 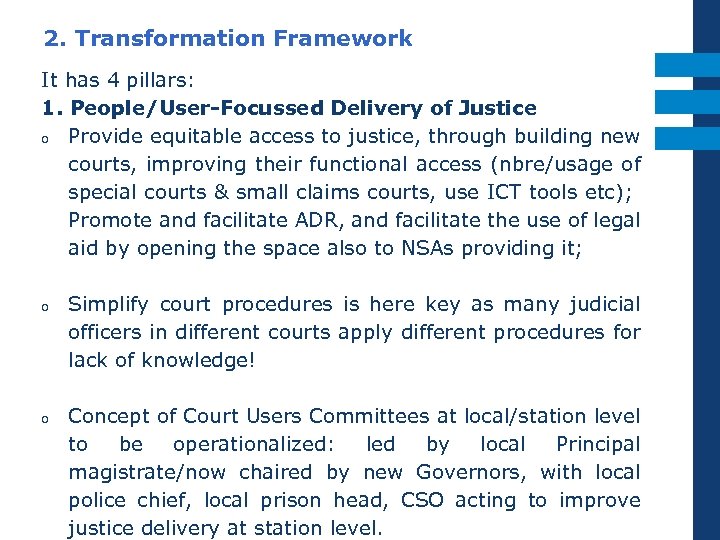 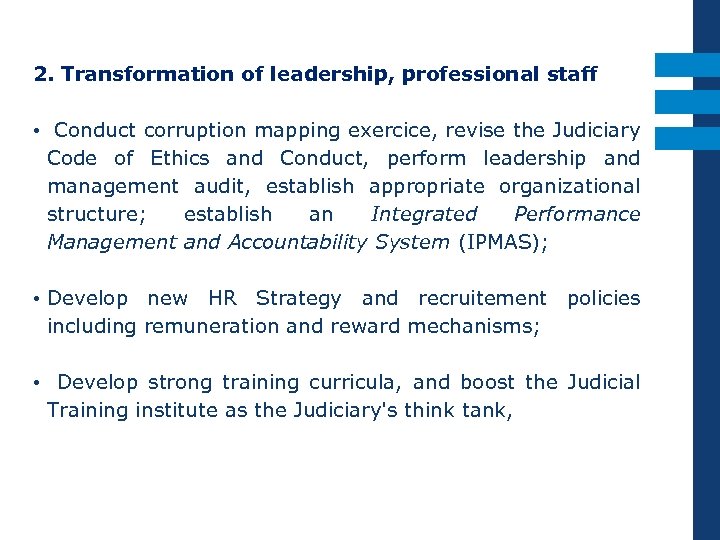 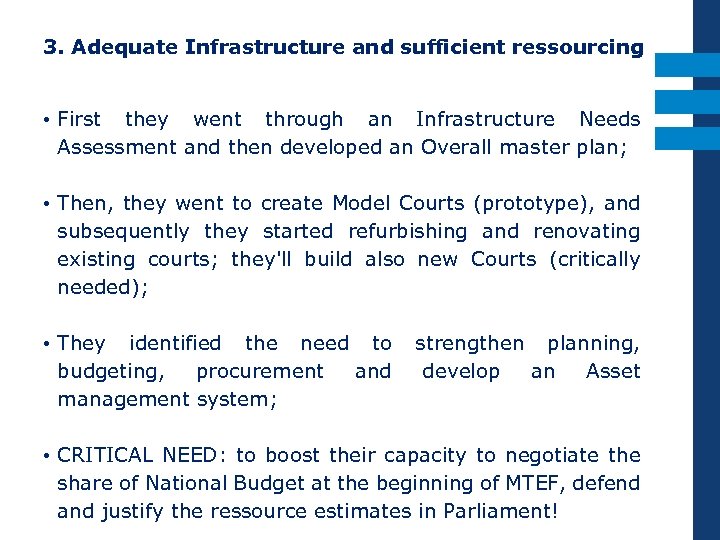 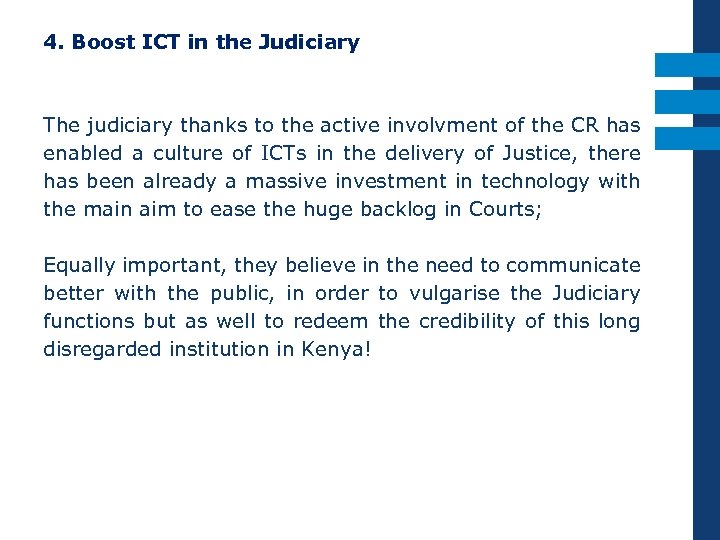 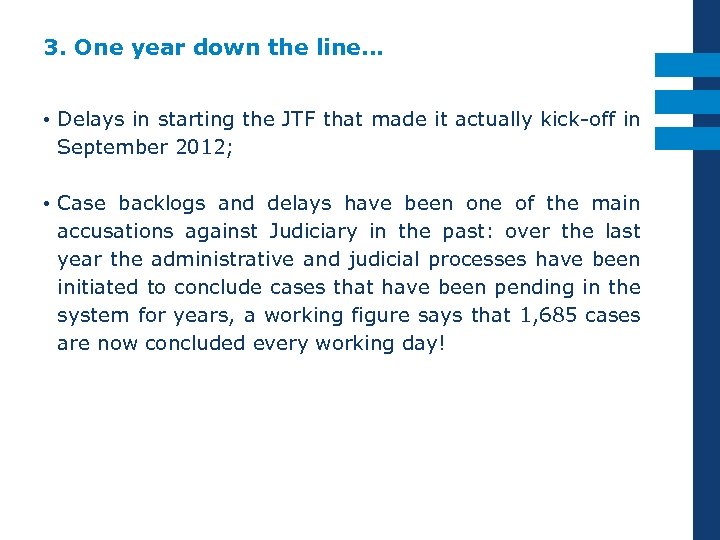 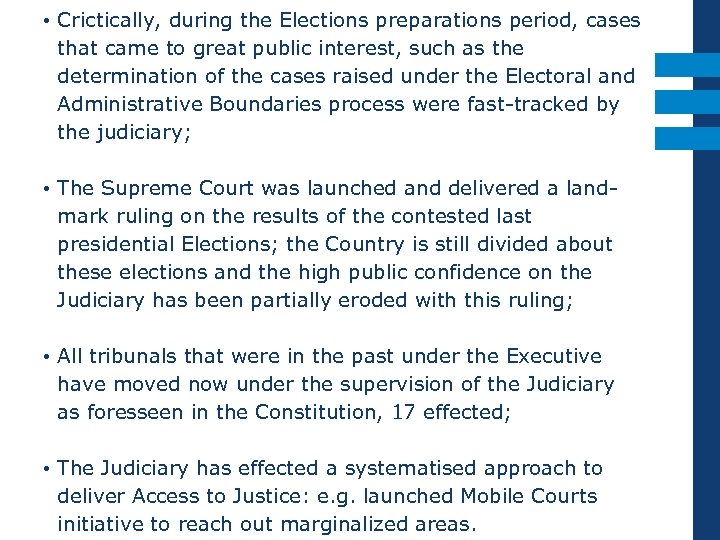 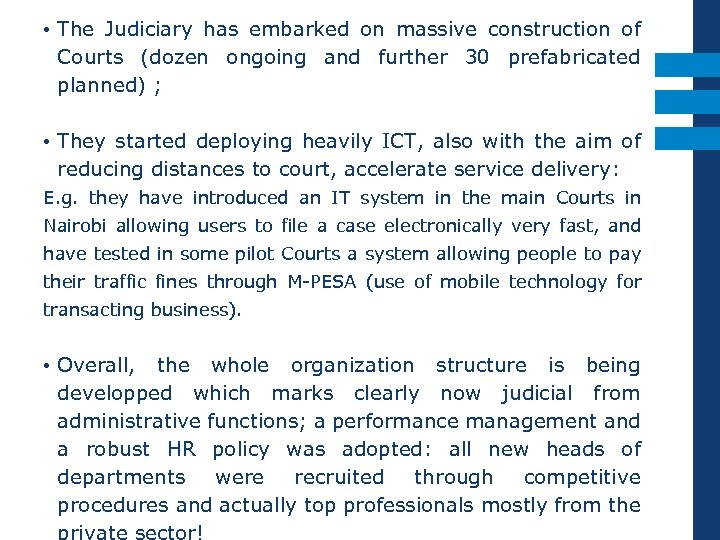 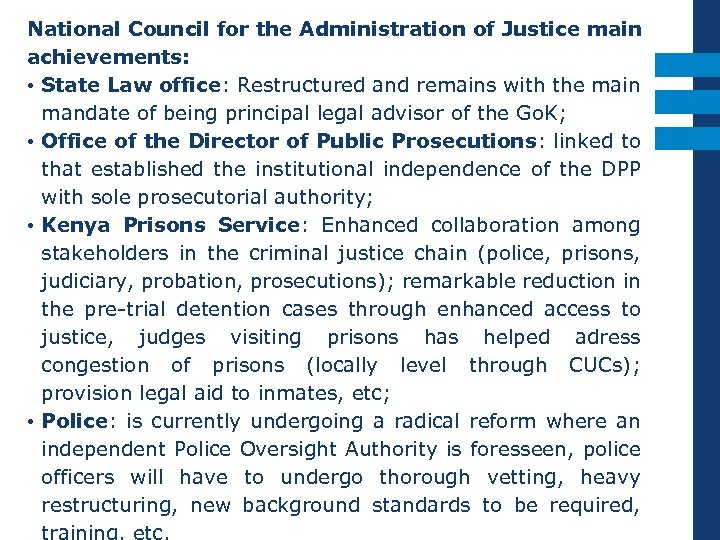 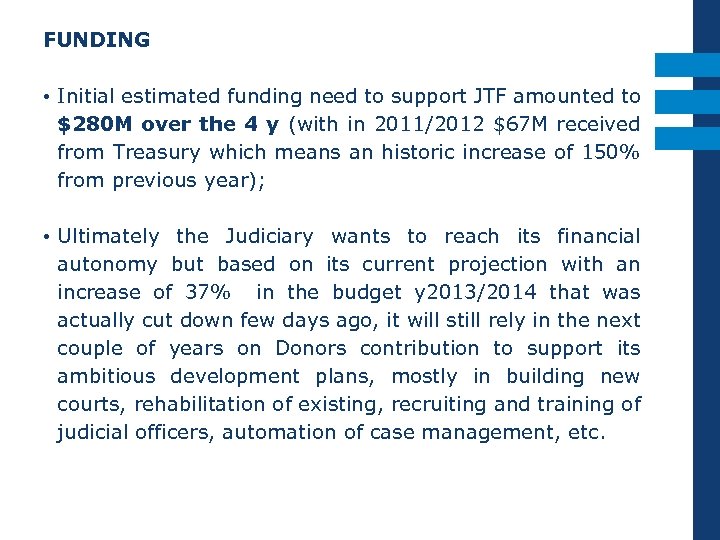 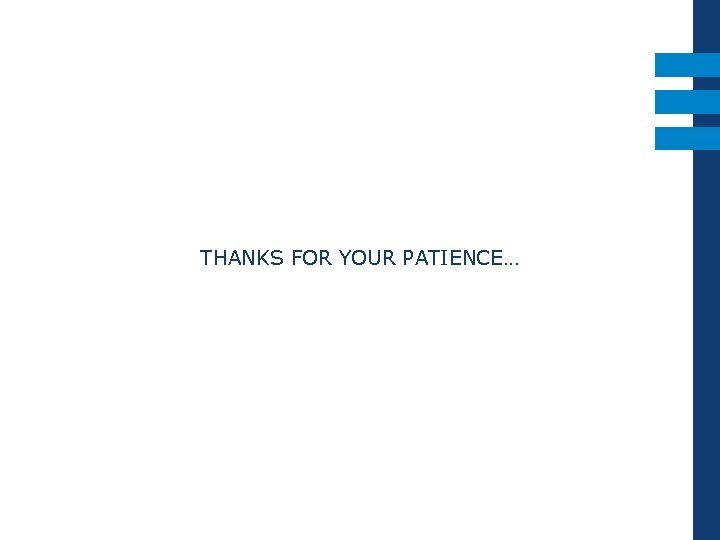 1. Backrgound The Judiciary since the colonial Kenyan State in 1895 to date, was rating very poorly with the public opinion, perceived as purposely designed to serve the interest of the government of the day! Constitution 2010 lays foundation for the transformation not only the Judiciary but the whole Governance system in Kenya; generally aknowledged by many observers as one of the most progressive Constitutions in Africa; Art. 159 established the Judiciary as an independent authority, one Arm of the Government, that "shall not be subject to the control or direction of any authority".

But more interestingly, the Judiciary along the new Cabinet, of which all the Ministers went last month through a public vetting by the Parliament, and all new Constitutional Commissions and Public Authorities have to go through public vetting, which includes scrutiny from the Anti-Corruption Commission, Police and Intelligence Service records; In the case of the Judiciary, the Chief Justice-CJ, his deputy, the Chief Registrar and all Judges and Magistrates went through an extensive vetting exercice by a Board composed of eminent personalities, national and international law experts; as a result many judges went packing but few challenged the Board ruling! The whole Justice chain is supervised by the National Council for Administration of Justice, chaired by CJ, composed of the Police, Prisons, Judiciary, DPP, witness protection, and with LSK and CSO represented.

3. Adequate Infrastructure and sufficient ressourcing • First they went through an Infrastructure Needs Assessment and then developed an Overall master plan; • Then, they went to create Model Courts (prototype), and subsequently they started refurbishing and renovating existing courts; they'll build also new Courts (critically needed); • They identified the need to budgeting, procurement and management system; strengthen planning, develop an Asset • CRITICAL NEED: to boost their capacity to negotiate the share of National Budget at the beginning of MTEF, defend and justify the ressource estimates in Parliament!

4. Boost ICT in the Judiciary The judiciary thanks to the active involvment of the CR has enabled a culture of ICTs in the delivery of Justice, there has been already a massive investment in technology with the main aim to ease the huge backlog in Courts; Equally important, they believe in the need to communicate better with the public, in order to vulgarise the Judiciary functions but as well to redeem the credibility of this long disregarded institution in Kenya!

3. One year down the line… • Delays in starting the JTF that made it actually kick-off in September 2012; • Case backlogs and delays have been one of the main accusations against Judiciary in the past: over the last year the administrative and judicial processes have been initiated to conclude cases that have been pending in the system for years, a working figure says that 1, 685 cases are now concluded every working day!

• Crictically, during the Elections preparations period, cases that came to great public interest, such as the determination of the cases raised under the Electoral and Administrative Boundaries process were fast-tracked by the judiciary; • The Supreme Court was launched and delivered a landmark ruling on the results of the contested last presidential Elections; the Country is still divided about these elections and the high public confidence on the Judiciary has been partially eroded with this ruling; • All tribunals that were in the past under the Executive have moved now under the supervision of the Judiciary as foresseen in the Constitution, 17 effected; • The Judiciary has effected a systematised approach to deliver Access to Justice: e. g. launched Mobile Courts initiative to reach out marginalized areas.

• The Judiciary has embarked on massive construction of Courts (dozen ongoing and further 30 prefabricated planned) ; • They started deploying heavily ICT, also with the aim of reducing distances to court, accelerate service delivery: E. g. they have introduced an IT system in the main Courts in Nairobi allowing users to file a case electronically very fast, and have tested in some pilot Courts a system allowing people to pay their traffic fines through M-PESA (use of mobile technology for transacting business). • Overall, the whole organization structure is being developped which marks clearly now judicial from administrative functions; a performance management and a robust HR policy was adopted: all new heads of departments were recruited through competitive procedures and actually top professionals mostly from the private sector!

National Council for the Administration of Justice main achievements: • State Law office: Restructured and remains with the main mandate of being principal legal advisor of the Go. K; • Office of the Director of Public Prosecutions: linked to that established the institutional independence of the DPP with sole prosecutorial authority; • Kenya Prisons Service: Enhanced collaboration among stakeholders in the criminal justice chain (police, prisons, judiciary, probation, prosecutions); remarkable reduction in the pre-trial detention cases through enhanced access to justice, judges visiting prisons has helped adress congestion of prisons (locally level through CUCs); provision legal aid to inmates, etc; • Police: is currently undergoing a radical reform where an independent Police Oversight Authority is foresseen, police officers will have to undergo thorough vetting, heavy restructuring, new background standards to be required, training, etc.

FUNDING • Initial estimated funding need to support JTF amounted to $280 M over the 4 y (with in 2011/2012 $67 M received from Treasury which means an historic increase of 150% from previous year); • Ultimately the Judiciary wants to reach its financial autonomy but based on its current projection with an increase of 37% in the budget y 2013/2014 that was actually cut down few days ago, it will still rely in the next couple of years on Donors contribution to support its ambitious development plans, mostly in building new courts, rehabilitation of existing, recruiting and training of judicial officers, automation of case management, etc.

THANKS FOR YOUR PATIENCE…