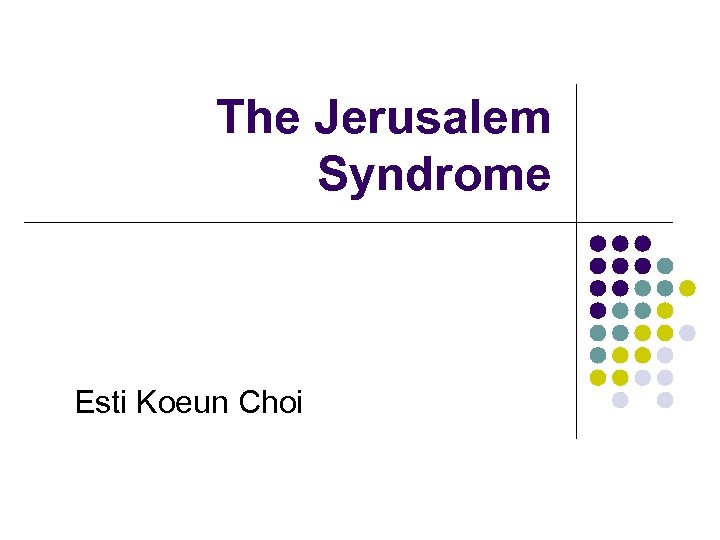 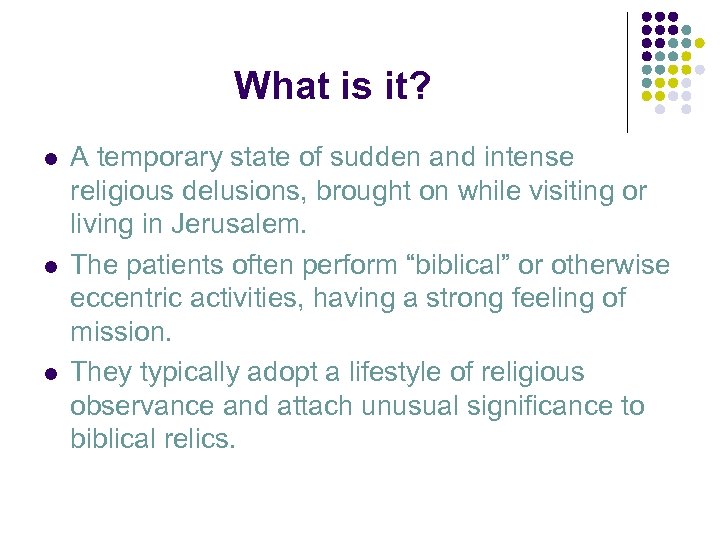 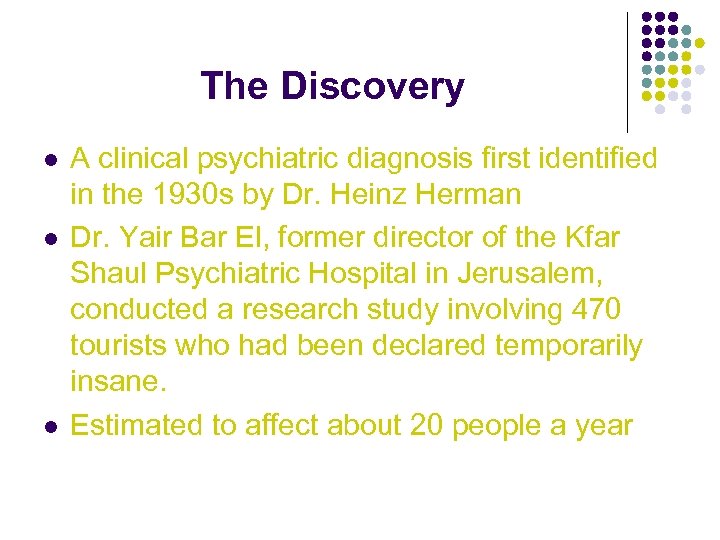 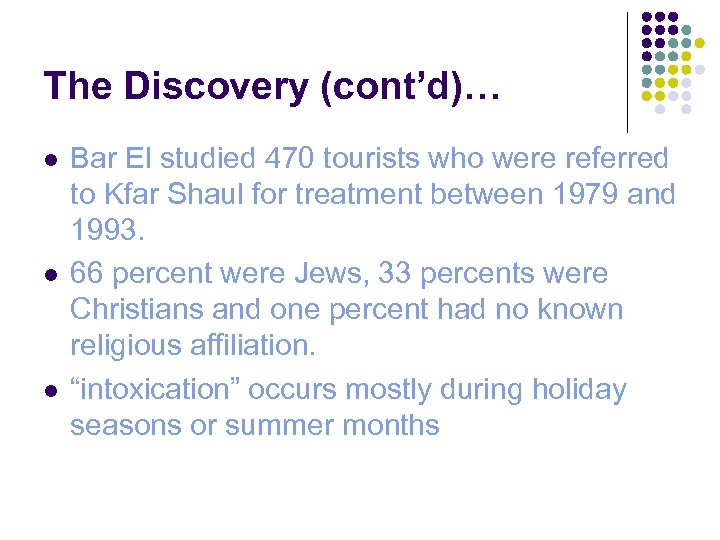 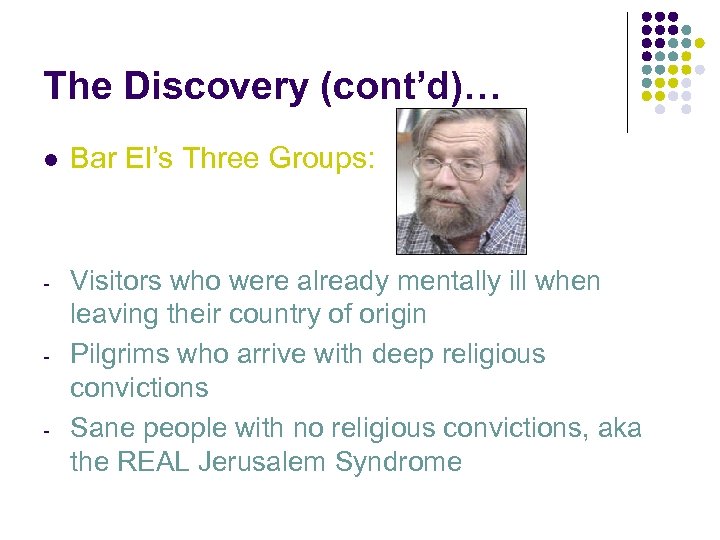 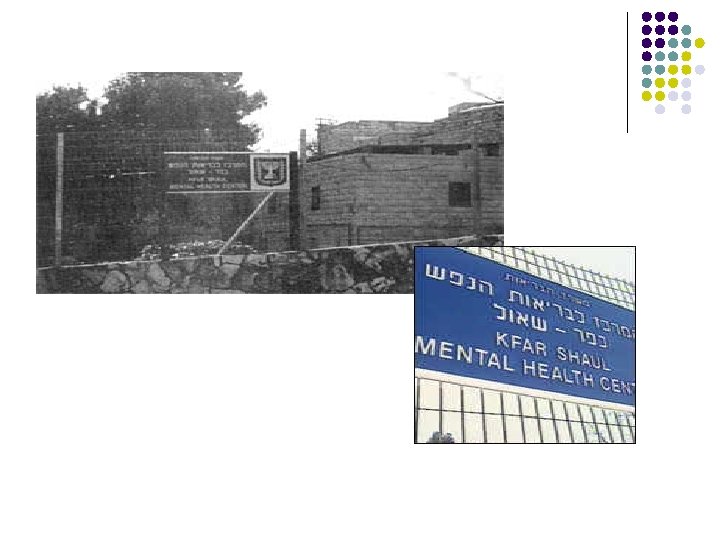 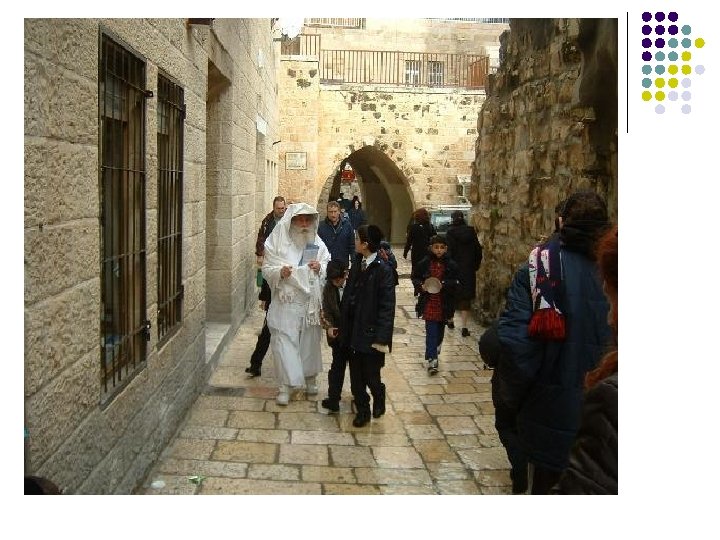 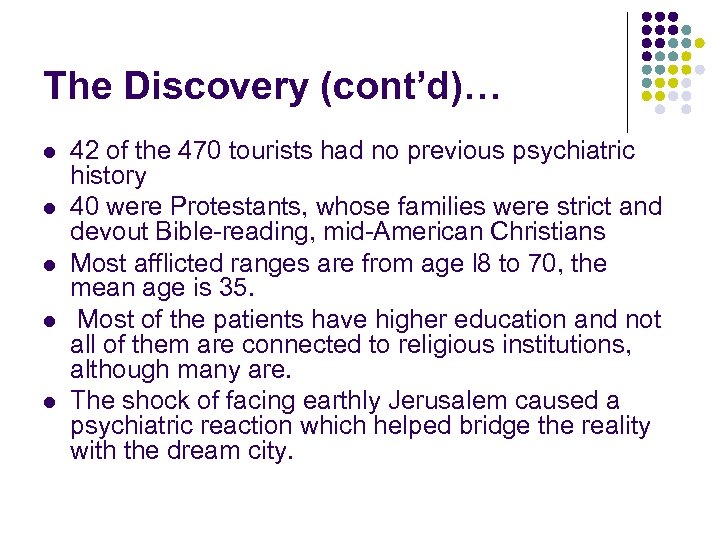 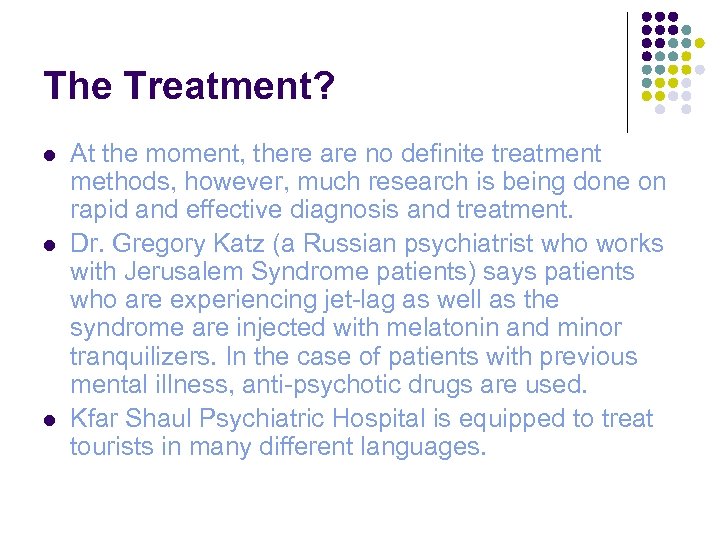 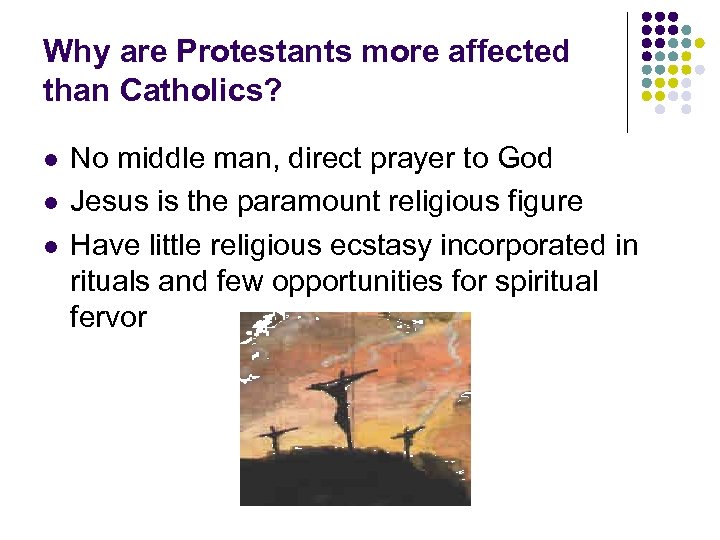 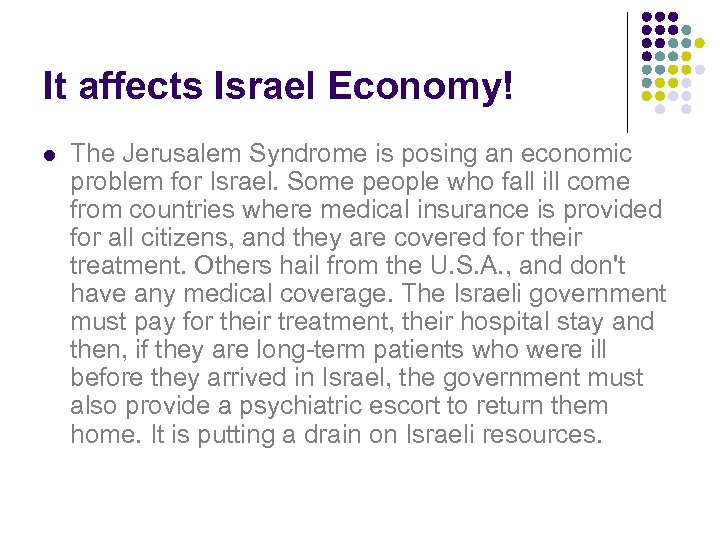 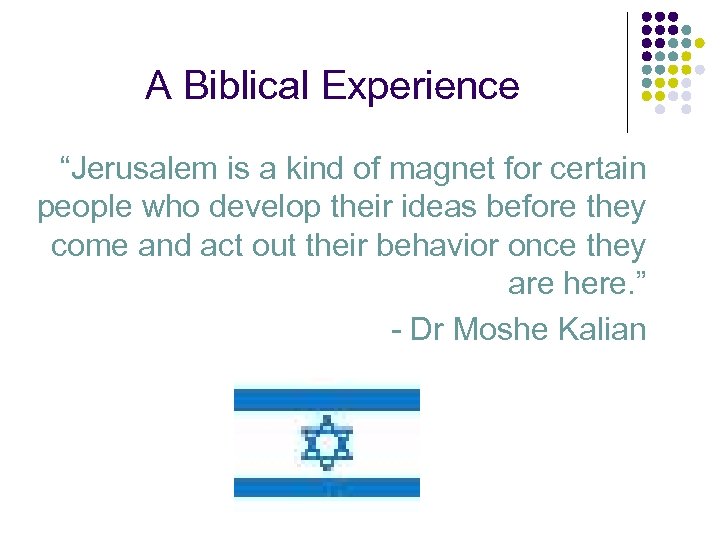 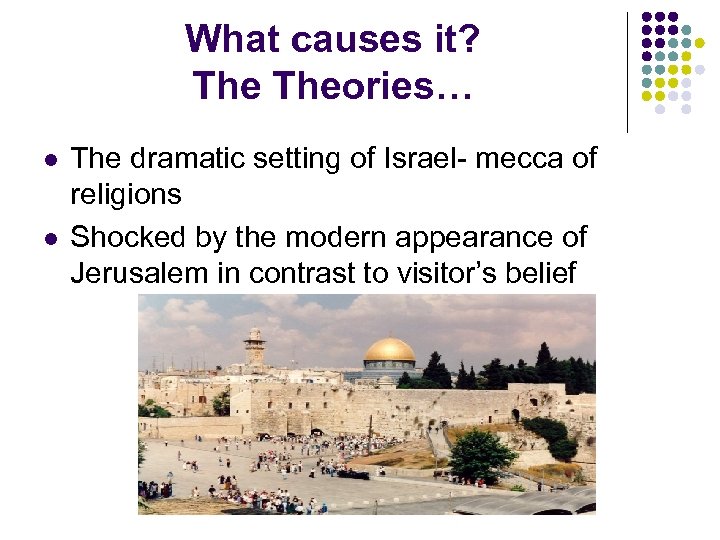 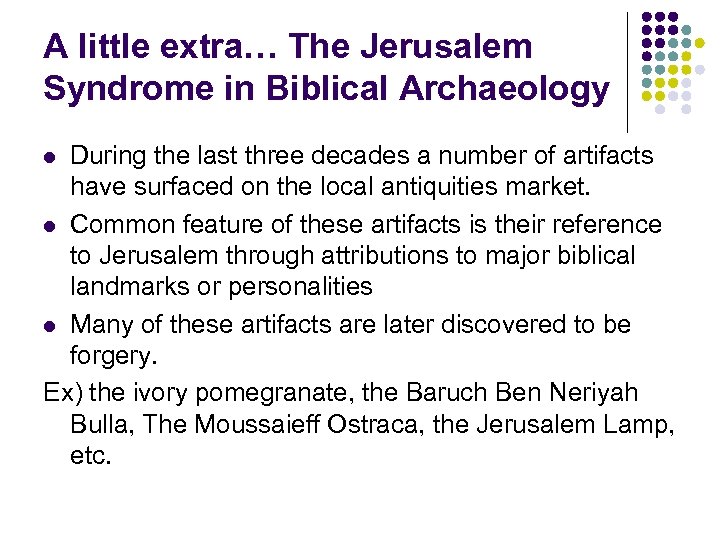 What is it? l l l A temporary state of sudden and intense religious delusions, brought on while visiting or living in Jerusalem. The patients often perform “biblical” or otherwise eccentric activities, having a strong feeling of mission. They typically adopt a lifestyle of religious observance and attach unusual significance to biblical relics.

The Discovery (cont’d)… l l l Bar El studied 470 tourists who were referred to Kfar Shaul for treatment between 1979 and 1993. 66 percent were Jews, 33 percents were Christians and one percent had no known religious affiliation. “intoxication” occurs mostly during holiday seasons or summer months

The Discovery (cont’d)… l l l 42 of the 470 tourists had no previous psychiatric history 40 were Protestants, whose families were strict and devout Bible-reading, mid-American Christians Most afflicted ranges are from age l 8 to 70, the mean age is 35. Most of the patients have higher education and not all of them are connected to religious institutions, although many are. The shock of facing earthly Jerusalem caused a psychiatric reaction which helped bridge the reality with the dream city.

The Treatment? l l l At the moment, there are no definite treatment methods, however, much research is being done on rapid and effective diagnosis and treatment. Dr. Gregory Katz (a Russian psychiatrist who works with Jerusalem Syndrome patients) says patients who are experiencing jet-lag as well as the syndrome are injected with melatonin and minor tranquilizers. In the case of patients with previous mental illness, anti-psychotic drugs are used. Kfar Shaul Psychiatric Hospital is equipped to treat tourists in many different languages.

Why are Protestants more affected than Catholics? l l l No middle man, direct prayer to God Jesus is the paramount religious figure Have little religious ecstasy incorporated in rituals and few opportunities for spiritual fervor

It affects Israel Economy! l The Jerusalem Syndrome is posing an economic problem for Israel. Some people who fall ill come from countries where medical insurance is provided for all citizens, and they are covered for their treatment. Others hail from the U. S. A. , and don't have any medical coverage. The Israeli government must pay for their treatment, their hospital stay and then, if they are long-term patients who were ill before they arrived in Israel, the government must also provide a psychiatric escort to return them home. It is putting a drain on Israeli resources.

A Biblical Experience “Jerusalem is a kind of magnet for certain people who develop their ideas before they come and act out their behavior once they are here. ” - Dr Moshe Kalian

What causes it? Theories… l l The dramatic setting of Israel- mecca of religions Shocked by the modern appearance of Jerusalem in contrast to visitor’s belief

A little extra… The Jerusalem Syndrome in Biblical Archaeology During the last three decades a number of artifacts have surfaced on the local antiquities market. l Common feature of these artifacts is their reference to Jerusalem through attributions to major biblical landmarks or personalities l Many of these artifacts are later discovered to be forgery. Ex) the ivory pomegranate, the Baruch Ben Neriyah Bulla, The Moussaieff Ostraca, the Jerusalem Lamp, etc. l