THE INTERNATIONAL CONTEST PRINTED MATTERS THE COVER OF 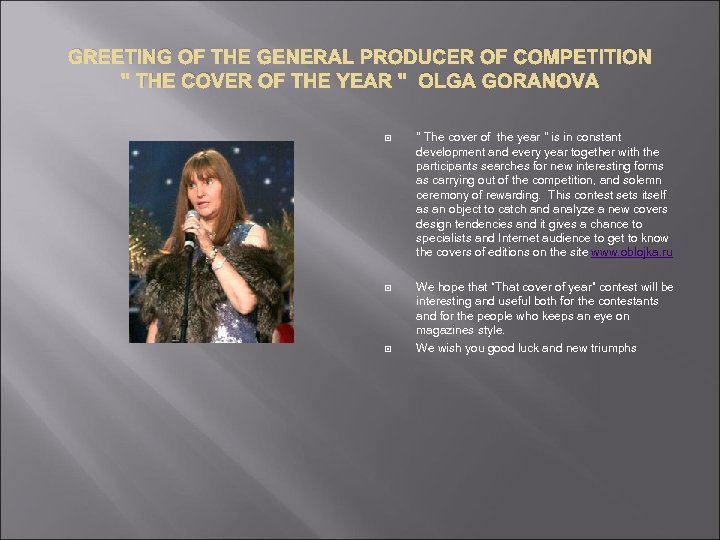 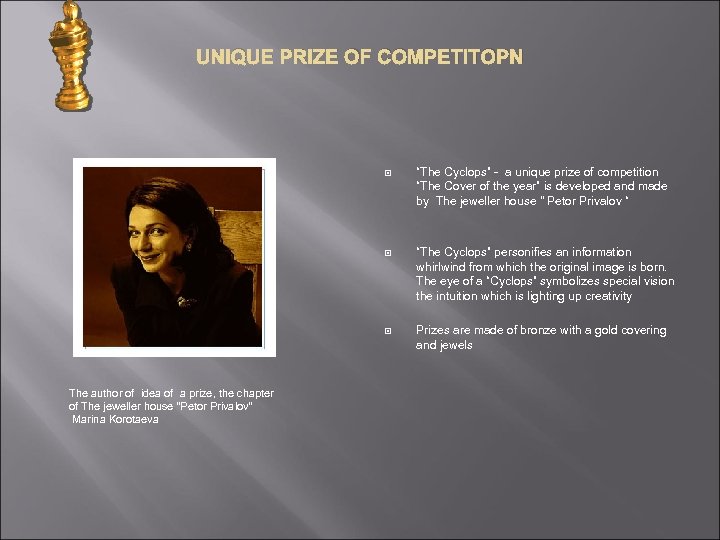 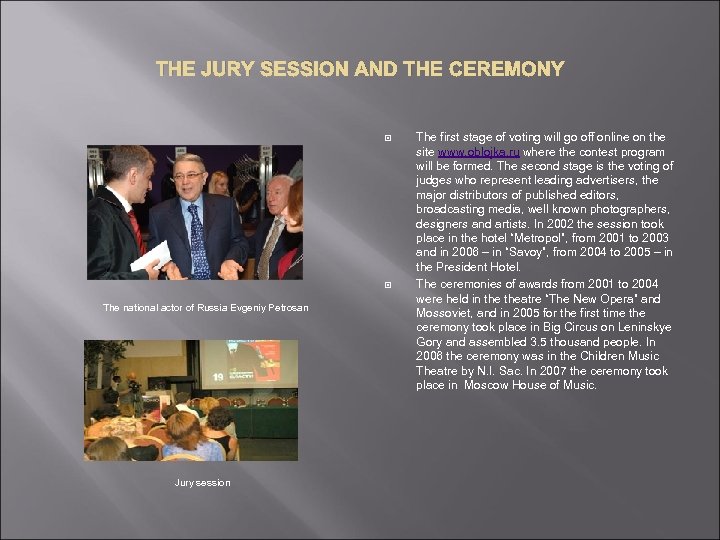 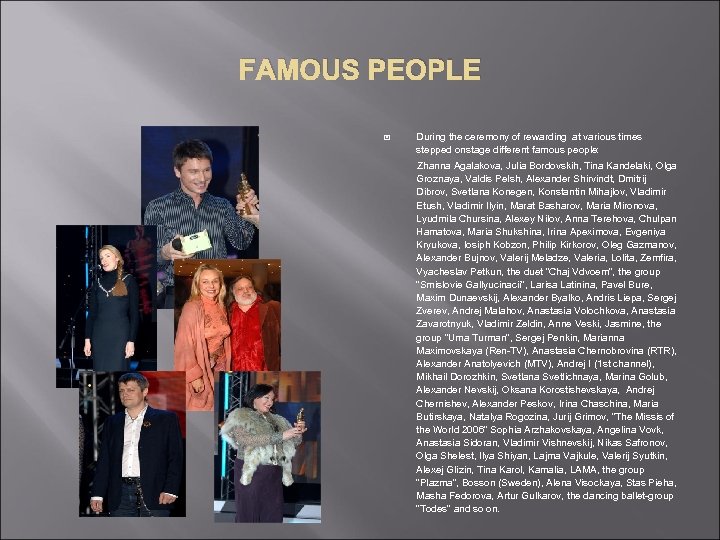 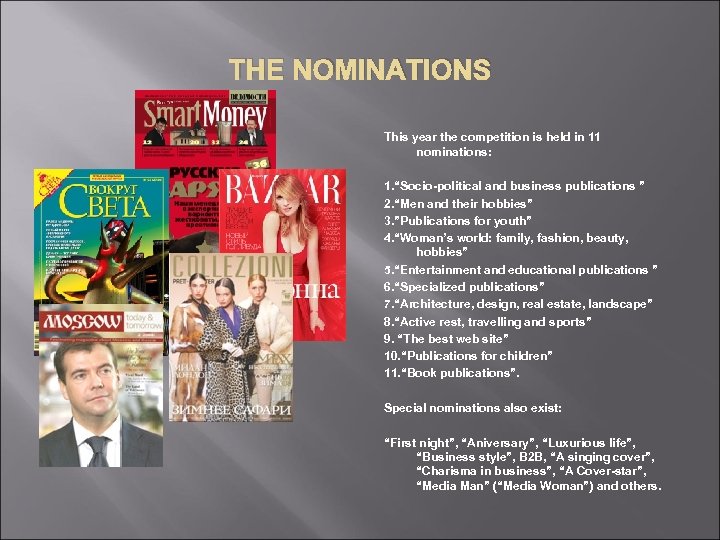 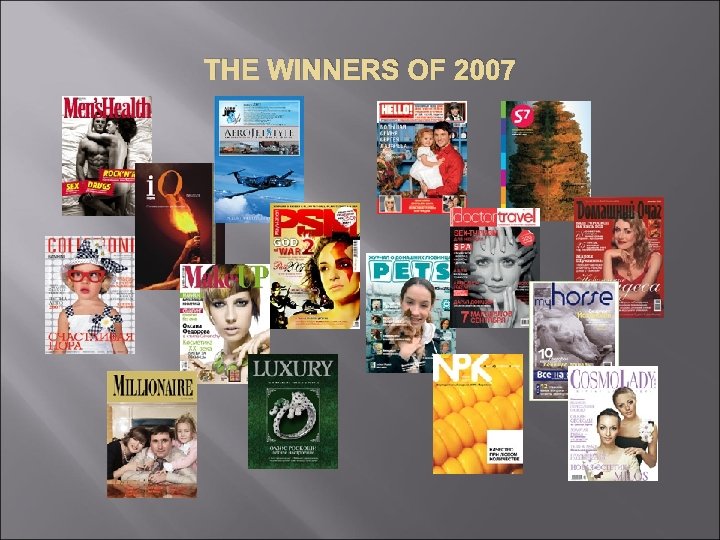 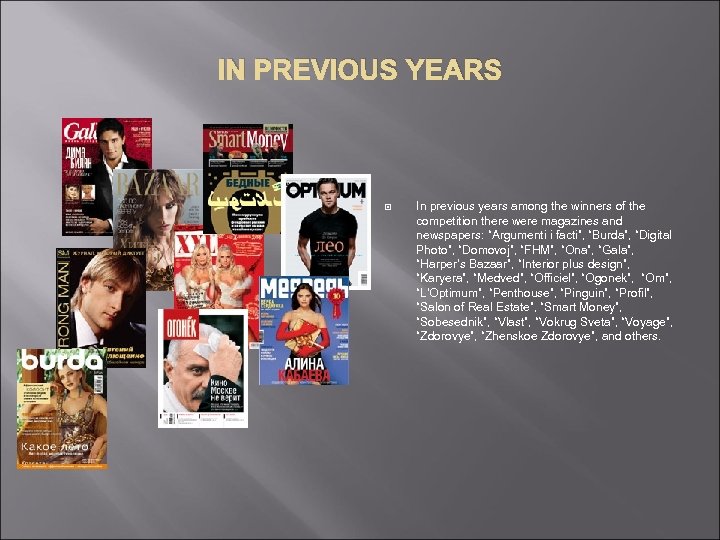 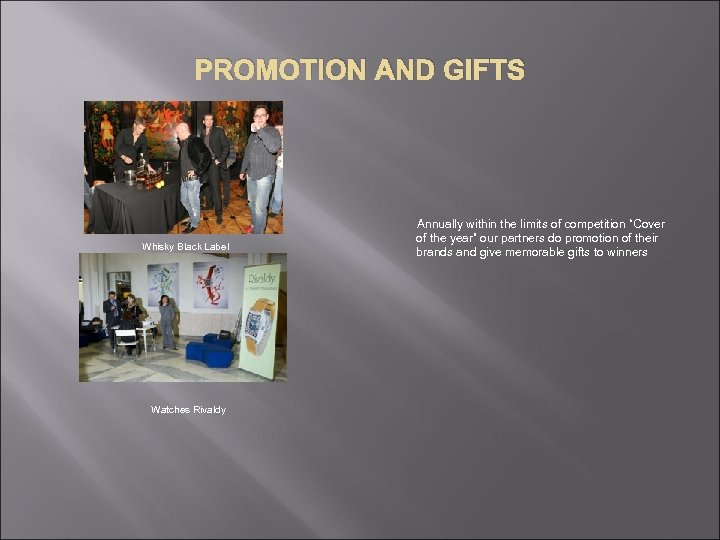 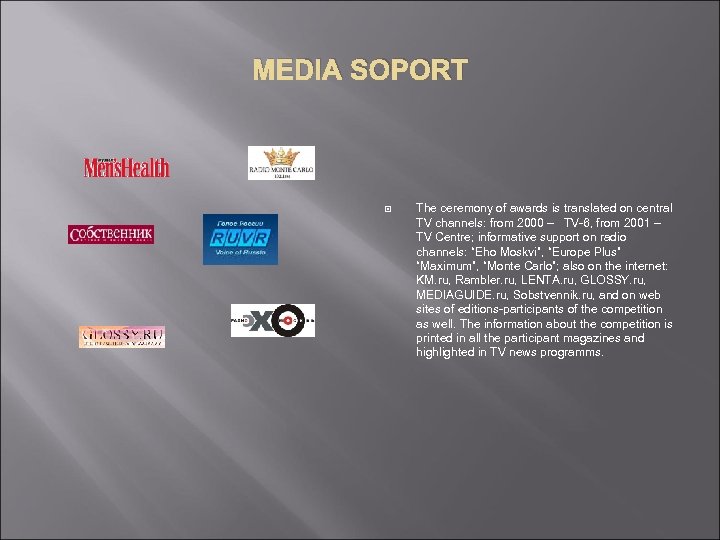 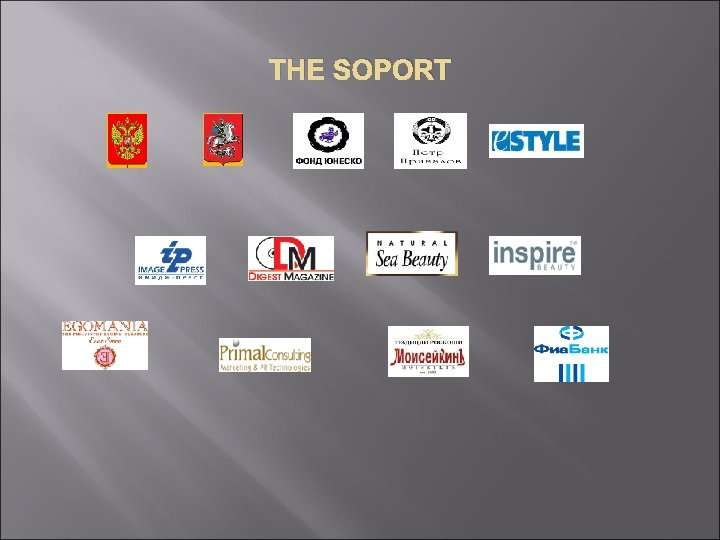 Скачать презентацию THE INTERNATIONAL CONTEST PRINTED MATTERS THE COVER OF

THE INTERNATIONAL CONTEST PRINTED MATTERS THE COVER OF THE YEAR

FROM THE INTERNATIONAL COMPETITION OF PRINTED PUBLICATIONS “The cover of the Year” is the international competition of printed publications in which all Russian top editions participate, including regional and foreign papers which are spread over Russia. The first competition like that took place in 2000 with the support of UNESCO. In our days the competition is also backed up by the Ministry of Culture and Mass Communication of the Russian Federation. “The cover of the Year” is not just getting awards by editions participating in it, but first of all it is a competition of global importance. A lot of “cover people” take part in this ceremony: cinema, theatre, television and show-business stars, representatives of business and political elite, famous sportsmen and artists, who can be both prize-handlers and prize-winners.

GREETING OF THE GENERAL PRODUCER OF COMPETITION " THE COVER OF THE YEAR " OLGA GORANOVA " The cover of the year " is in constant development and every year together with the participants searches for new interesting forms as carrying out of the competition, and solemn ceremony of rewarding. This contest sets itself as an object to catch and analyze a new covers design tendencies and it gives a chance to specialists and Internet audience to get to know the covers of editions on the site www. oblojka. ru We hope that “That cover of year” contest will be interesting and useful both for the contestants and for the people who keeps an eye on magazines style. We wish you good luck and new triumphs

UNIQUE PRIZE OF COMPETITOPN “The Cyclops” - a unique prize of competition “The Cover of the year” is developed and made by The jeweller house " Petor Privalov “ The author of idea of a prize, the chapter of The jeweller house “Petor Privalov” Marina Korotaeva “The Cyclops” personifies an information whirlwind from which the original image is born. The eye of a “Cyclops” symbolizes special vision the intuition which is lighting up creativity Prizes are made of bronze with a gold covering and jewels

THE JURY SESSION AND THE CEREMONY The national actor of Russia Evgeniy Petrosan Jury session The first stage of voting will go off online on the site www. oblojka. ru where the contest program will be formed. The second stage is the voting of judges who represent leading advertisers, the major distributors of published editors, broadcasting media, well known photographers, designers and artists. In 2002 the session took place in the hotel “Metropol”, from 2001 to 2003 and in 2006 – in “Savoy”, from 2004 to 2005 – in the President Hotel. The ceremonies of awards from 2001 to 2004 were held in theatre “The New Opera” and Mossoviet, and in 2005 for the first time the ceremony took place in Big Circus on Leninskye Gory and assembled 3. 5 thousand people. In 2006 the ceremony was in the Children Music Theatre by N. I. Sac. In 2007 the ceremony took place in Moscow House of Music.

MEDIA SOPORT The ceremony of awards is translated on central TV channels: from 2000 – TV-6, from 2001 – TV Centre; informative support on radio channels: “Eho Moskvi”, “Europe Plus” “Maximum”, “Monte Carlo”; also on the internet: KM. ru, Rambler. ru, LENTA. ru, GLOSSY. ru, MEDIAGUIDE. ru, Sobstvennik. ru, and on web sites of editions-participants of the competition as well. The information about the competition is printed in all the participant magazines and highlighted in TV news programms.