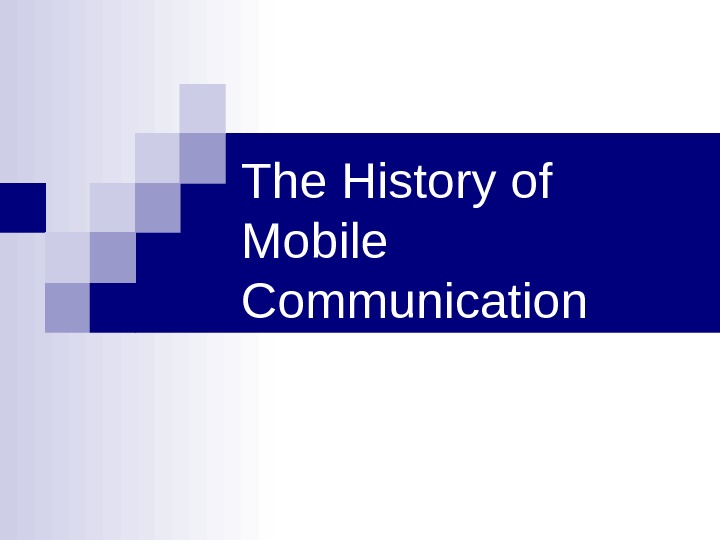 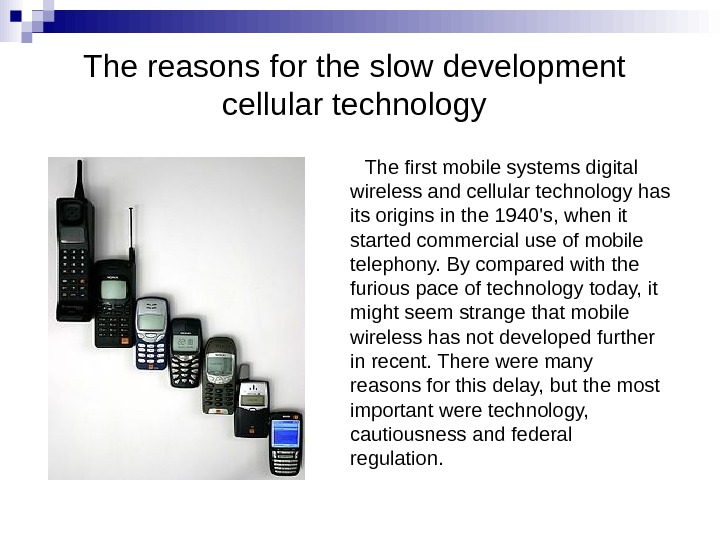 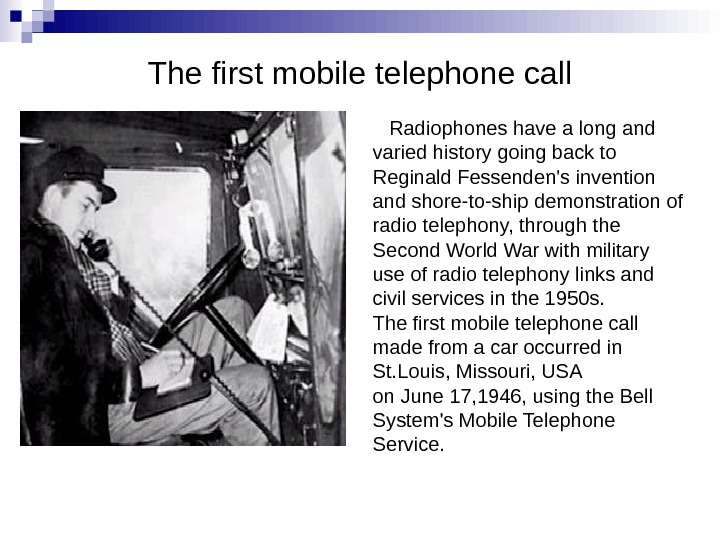 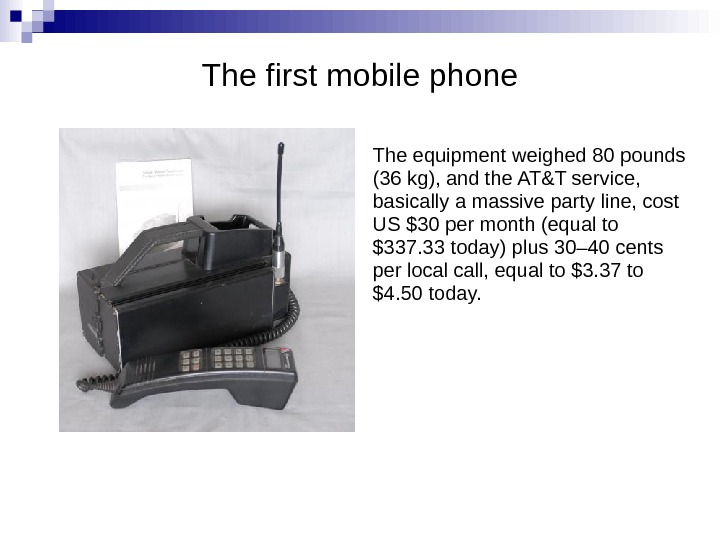 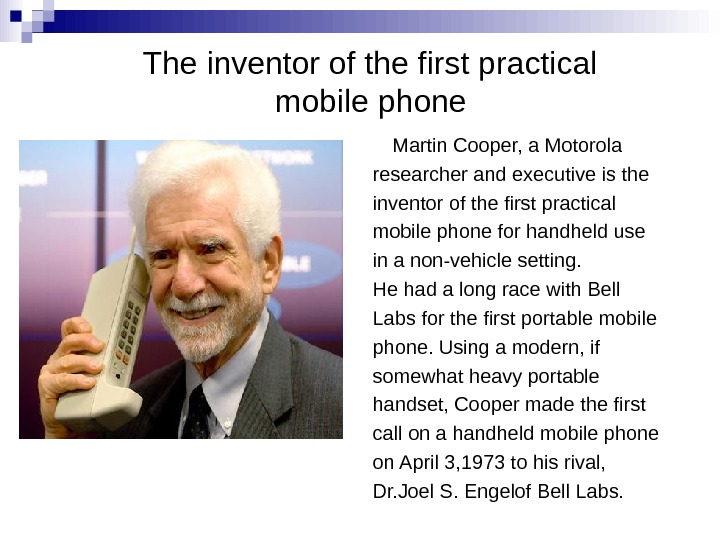 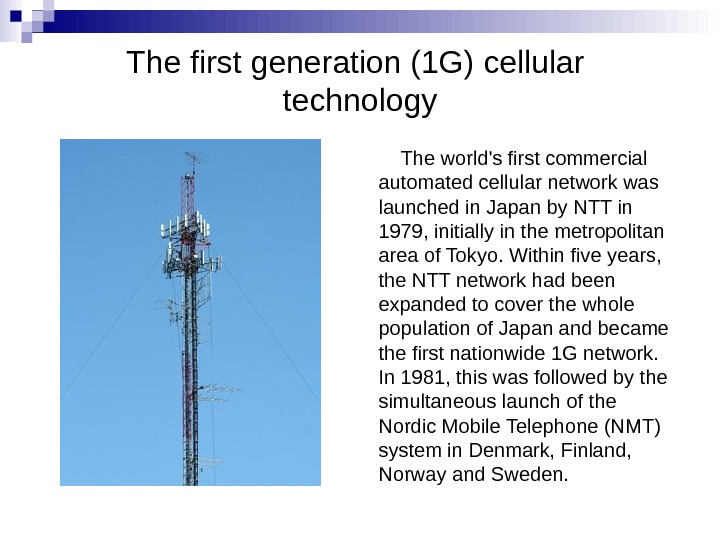 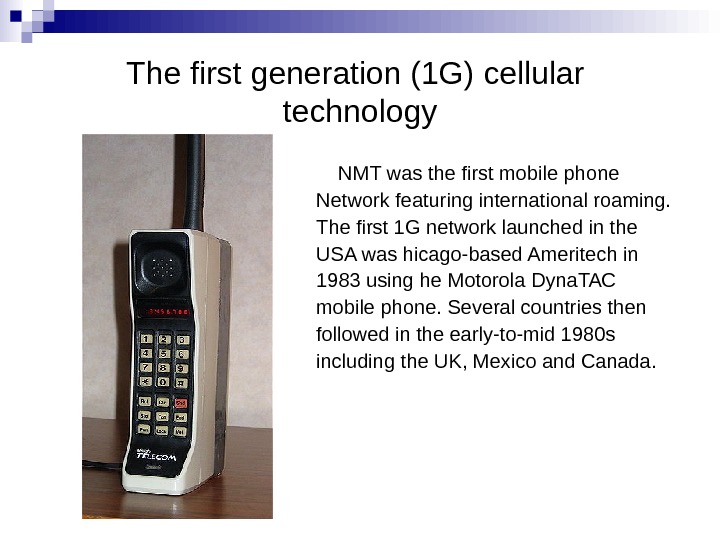 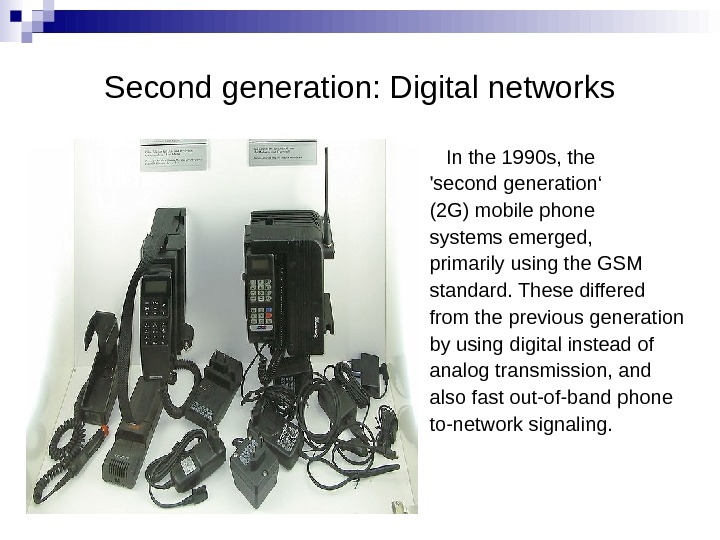 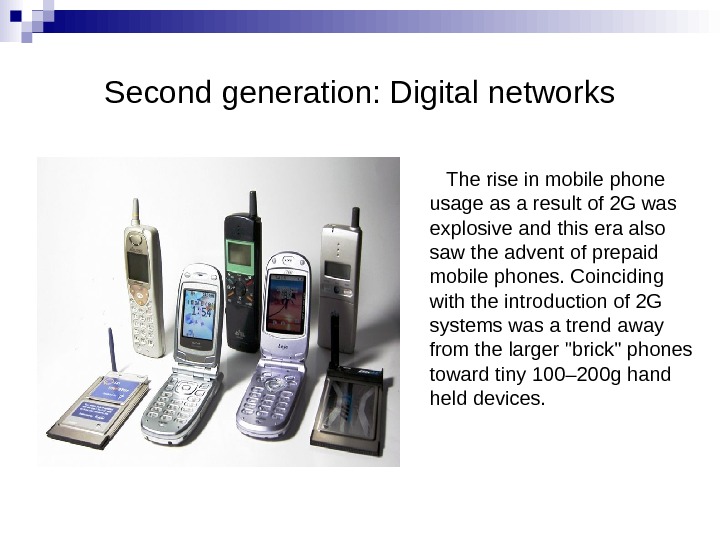 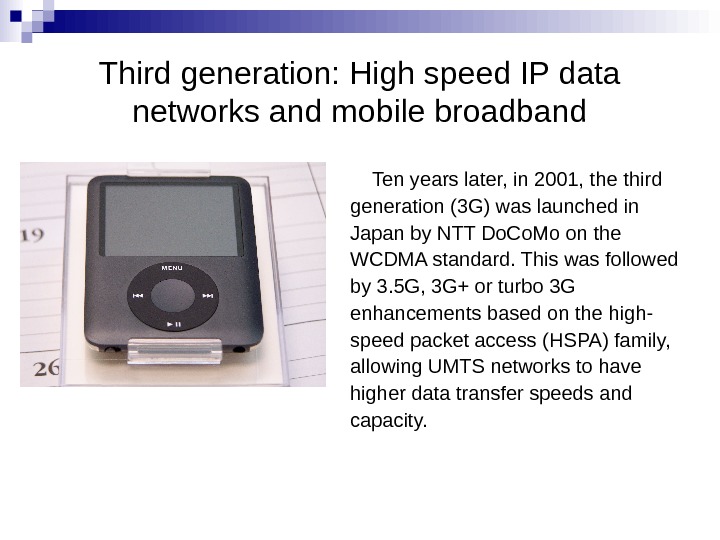 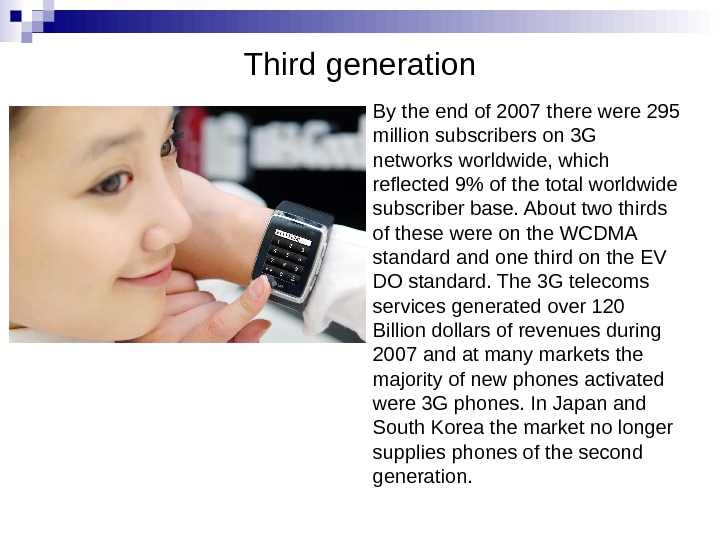 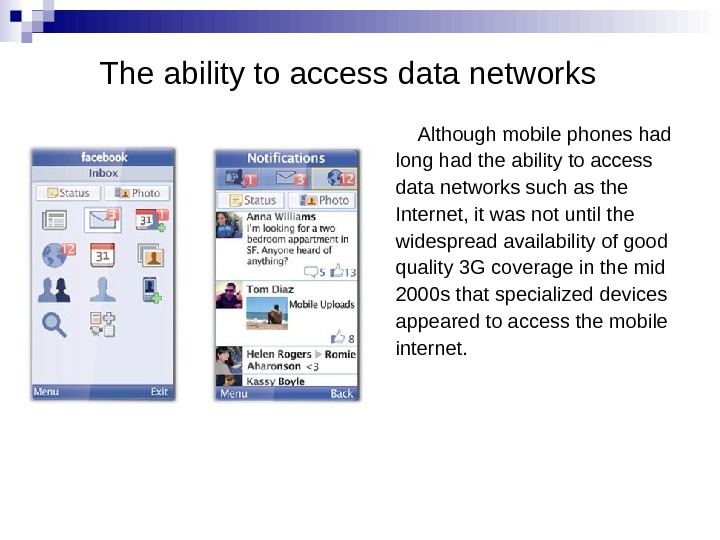 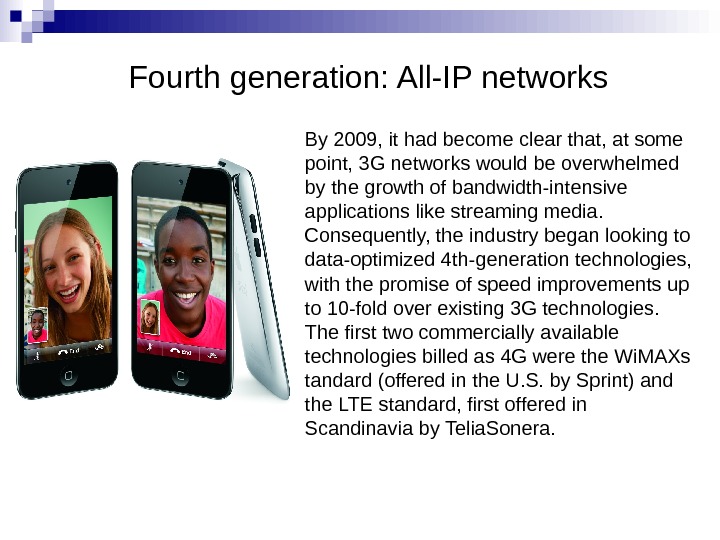 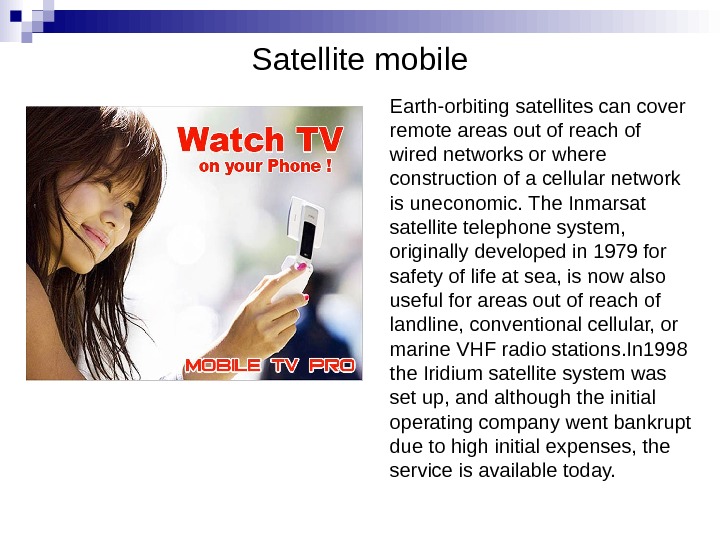 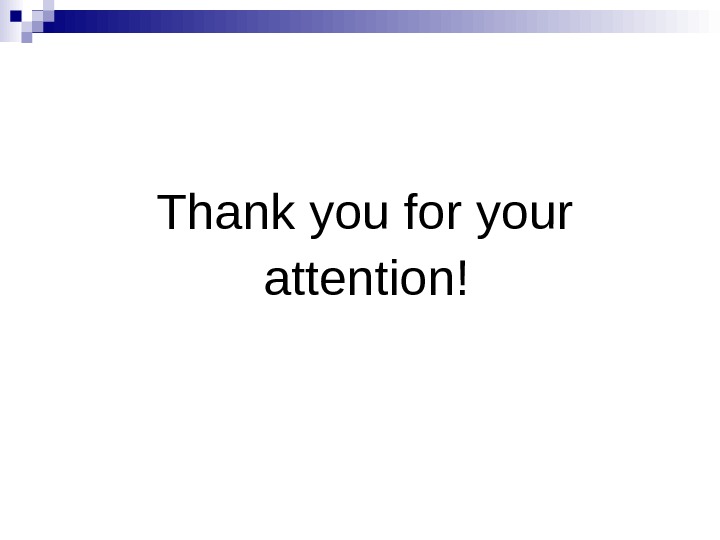 Скачать презентацию The History of Mobile Communication The reasons

The History of Mobile Communication

The reasons for the slow development cellular technology The first mobile systems digital wireless and cellular technology has its origins in the 1940’s, when it started commercial use of mobile telephony. By compared with the furious pace of technology today, it might seem strange that mobile wireless has not developed further in recent. There were many reasons for this delay, but the most important were technology, cautiousness and federal regulation.

The first mobile telephone call Radiophones have a long and varied history going back to Reginald Fessenden’s invention and shore-to-ship demonstration of radio telephony, through the Second World War with military use of radio telephony links and civil services in the 1950 s. The first mobile telephone call made from a car occurred in St. Louis, Missouri, USA on June 17, 1946, using the Bell System’s Mobile Telephone Service.

The first generation (1 G) cellular technology The world’s first commercial automated cellular network was launched in Japan by NTT in 1979, initially in the metropolitan area of Tokyo. Within five years, the NTT network had been expanded to cover the whole population of Japan and became the first nationwide 1 G network. In 1981, this was followed by the simultaneous launch of the Nordic Mobile Telephone (NMT) system in Denmark, Finland, Norway and Sweden.

The first generation (1 G) cellular technology NMT was the first mobile phone Network featuring international roaming. The first 1 G network launched in the USA was hicago-based Ameritech in 1983 using he Motorola Dyna. TAC mobile phone. Several countries then followed in the early-to-mid 1980 s including the UK, Mexico and Canada.

Second generation: Digital networks The rise in mobile phone usage as a result of 2 G was explosive and this era also saw the advent of prepaid mobile phones. Coinciding with the introduction of 2 G systems was a trend away from the larger «brick» phones toward tiny 100– 200 g hand held devices.

Third generation: High speed IP data networks and mobile broadband Ten years later, in 2001, the third generation (3 G) was launched in Japan by NTT Do. Co. Mo on the WCDMA standard. This was followed by 3. 5 G, 3 G+ or turbo 3 G enhancements based on the high- speed packet access (HSPA) family, allowing UMTS networks to have higher data transfer speeds and capacity.

Third generation By the end of 2007 there were 295 million subscribers on 3 G networks worldwide, which reflected 9% of the total worldwide subscriber base. About two thirds of these were on the WCDMA standard and one third on the EV DO standard. The 3 G telecoms services generated over 120 Billion dollars of revenues during 2007 and at many markets the majority of new phones activated were 3 G phones. In Japan and South Korea the market no longer supplies phones of the second generation.

Fourth generation: All-IP networks By 2009, it had become clear that, at some point, 3 G networks would be overwhelmed by the growth of bandwidth-intensive applications like streaming media. Consequently, the industry began looking to data-optimized 4 th-generation technologies, with the promise of speed improvements up to 10 -fold over existing 3 G technologies. The first two commercially available technologies billed as 4 G were the Wi. MAXs tandard (offered in the U. S. by Sprint) and the LTE standard, first offered in Scandinavia by Telia. Sonera.

Satellite mobile Earth-orbiting satellites can cover remote areas out of reach of wired networks or where construction of a cellular network is uneconomic. The Inmarsat satellite telephone system, originally developed in 1979 for safety of life at sea, is now also useful for areas out of reach of landline, conventional cellular, or marine VHF radio stations. In 1998 the Iridium satellite system was set up, and although the initial operating company went bankrupt due to high initial expenses, the service is available today.

Thank you for your attention !