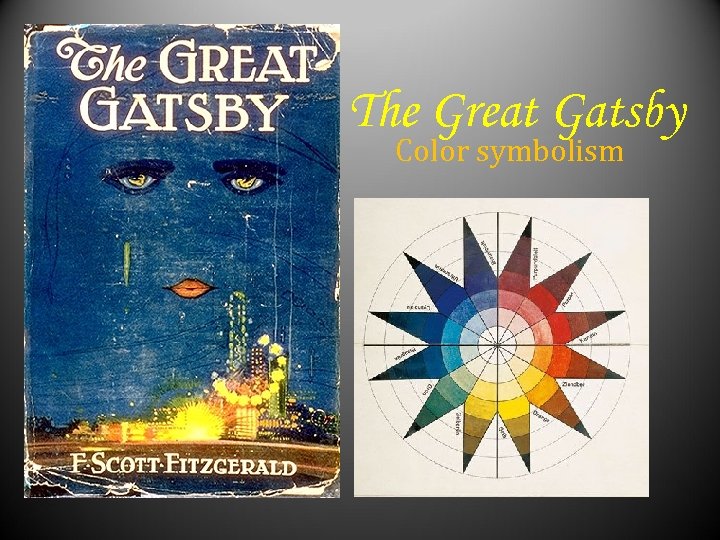 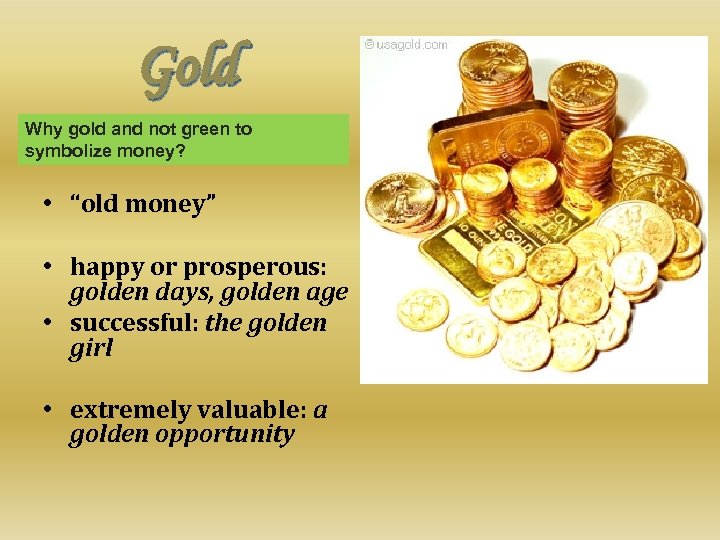 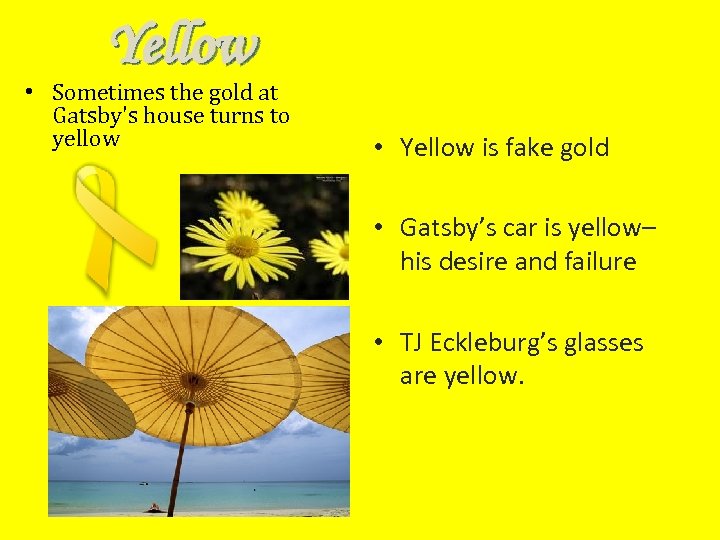 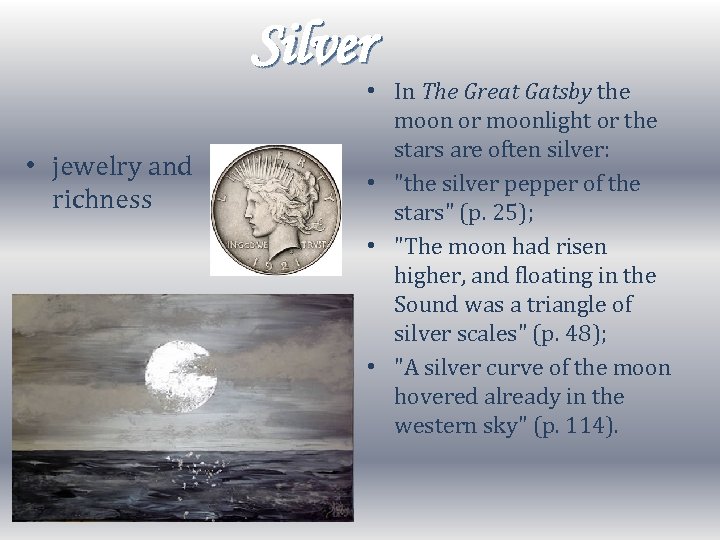 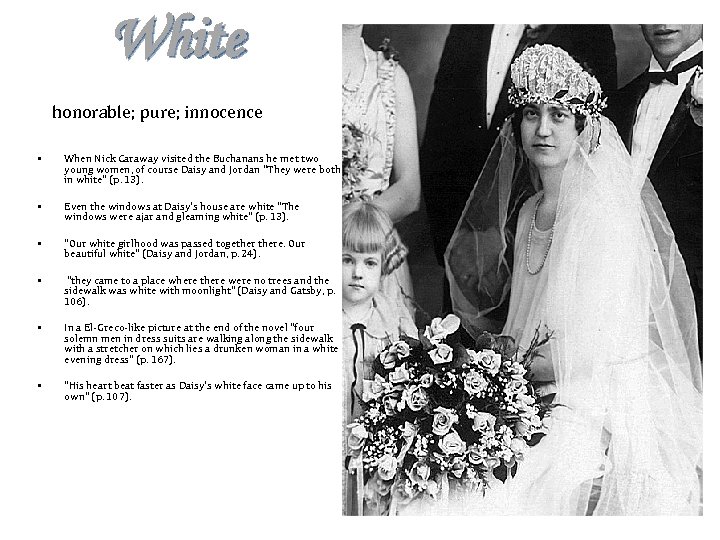 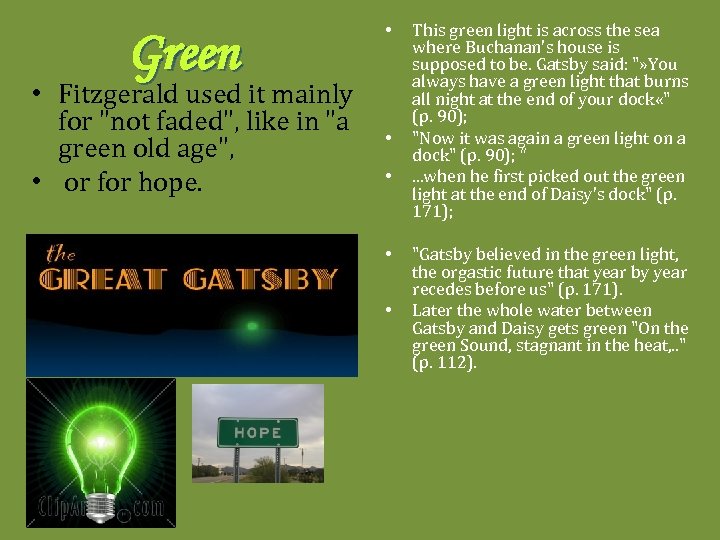 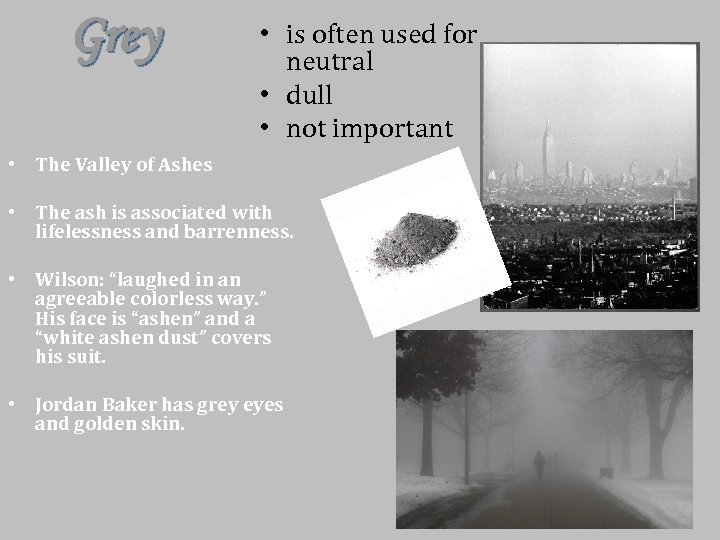 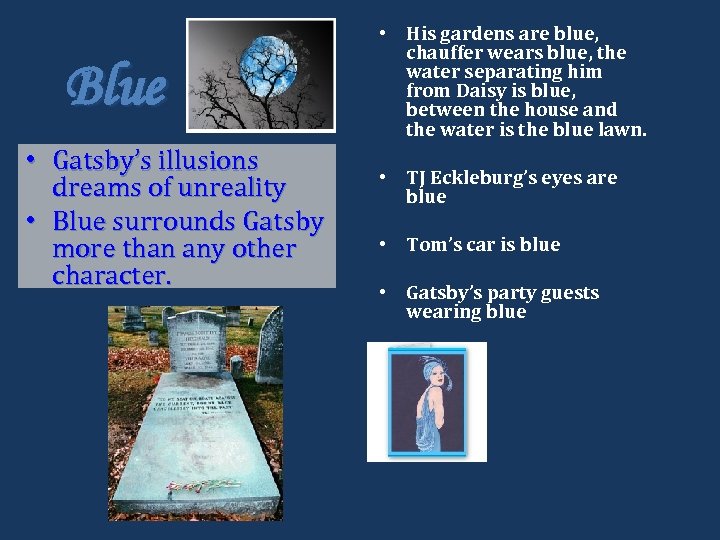 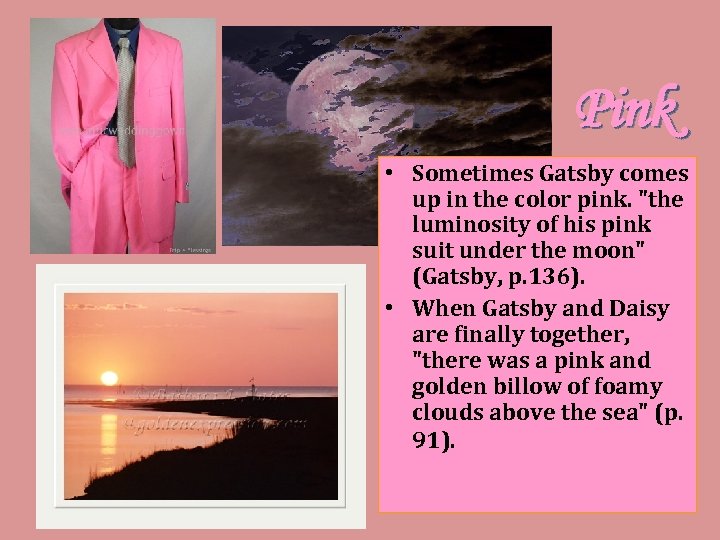 Silver • jewelry and richness • In The Great Gatsby the moon or moonlight or the stars are often silver: • "the silver pepper of the stars" (p. 25); • "The moon had risen higher, and floating in the Sound was a triangle of silver scales" (p. 48); • "A silver curve of the moon hovered already in the western sky" (p. 114).

White 1) morally unblemished • honorable; pure; innocence • When Nick Caraway visited the Buchanans he met two young women, of course Daisy and Jordan "They were both in white" (p. 13). • Even the windows at Daisy's house are white "The windows were ajar and gleaming white" (p. 13). • "Our white girlhood was passed togethere. Our beautiful white" (Daisy and Jordan, p. 24). • "they came to a place where there were no trees and the sidewalk was white with moonlight" (Daisy and Gatsby, p. 106). • In a El-Greco-like picture at the end of the novel "four solemn men in dress suits are walking along the sidewalk with a stretcher on which lies a drunken woman in a white evening dress" (p. 167). • "His heart beat faster as Daisy's white face came up to his own" (p. 107).

White • Daisy Fay. She wears white clothes and has a white car. • Fitzgerald uses the color white for At the end of the novel ["the party was over" (p. 171), like the end of the Jazz Age at the Great Depression 1929] somebody soiled Gatsby's house. "On the white steps an obscene word, scrawled by some boy with a piece of brick, stood out clearly in the moonlight, and I erased it" (p. 171).

Grey • is often used for neutral • dull • not important • The Valley of Ashes • The ash is associated with lifelessness and barrenness. • Wilson: “laughed in an agreeable colorless way. ” His face is “ashen” and a “white ashen dust” covers his suit. • Jordan Baker has grey eyes and golden skin.

Blue • Gatsby’s illusions dreams of unreality • Blue surrounds Gatsby more than any other character. • His gardens are blue, chauffer wears blue, the water separating him from Daisy is blue, between the house and the water is the blue lawn. • TJ Eckleburg’s eyes are blue • Tom’s car is blue • Gatsby’s party guests wearing blue

Pink • Sometimes Gatsby comes up in the color pink. "the luminosity of his pink suit under the moon" (Gatsby, p. 136). • When Gatsby and Daisy are finally together, "there was a pink and golden billow of foamy clouds above the sea" (p. 91).

Elements Of Art Unlocking and Discovering the Key

What is Art? An introduction to the concept

Landscape Planting Design Where in the design process