The government of the UK The Government 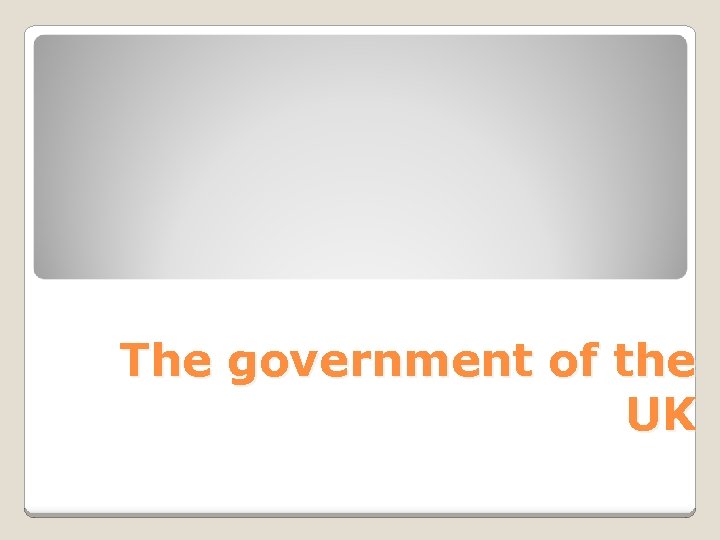 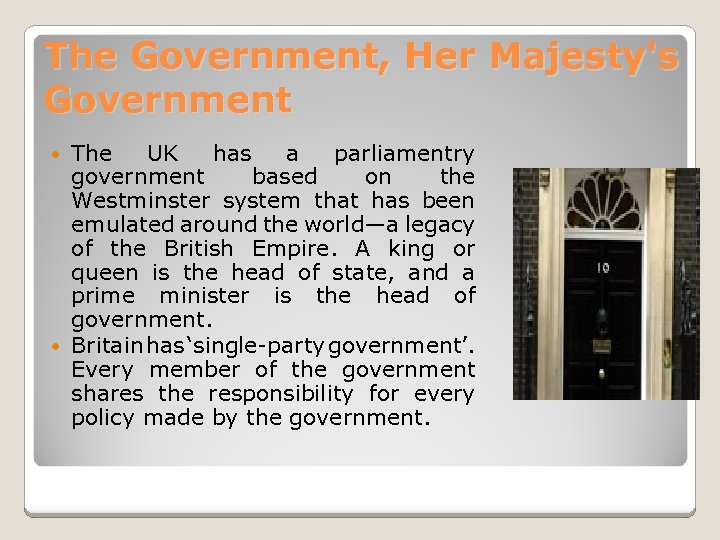 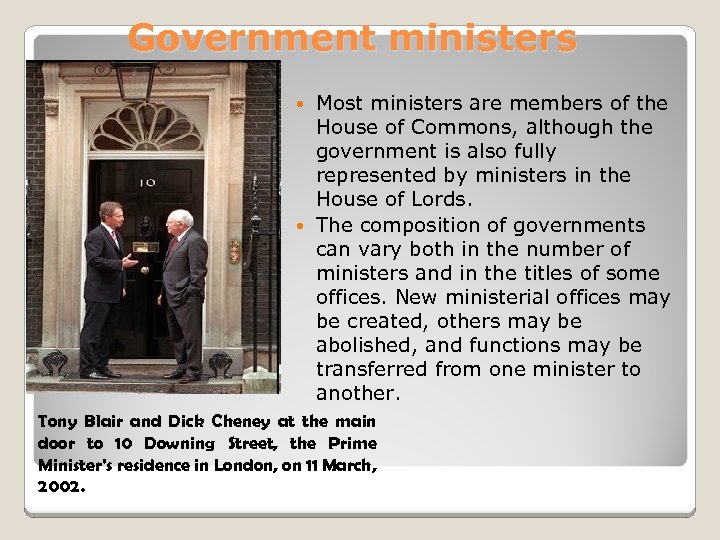 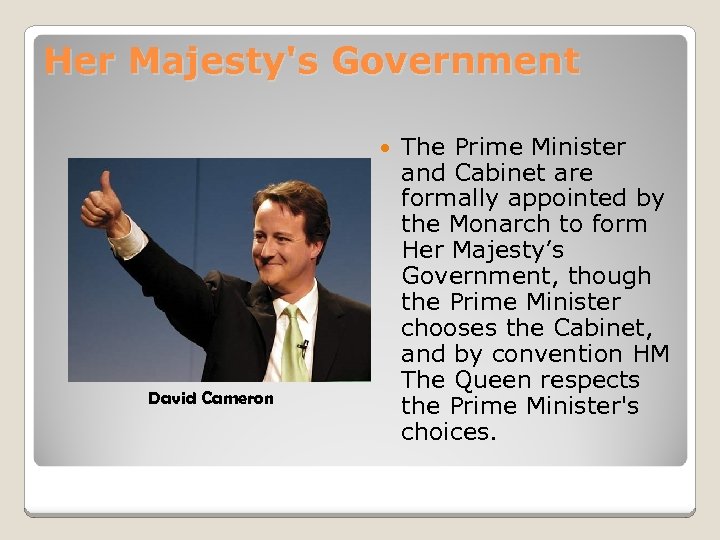 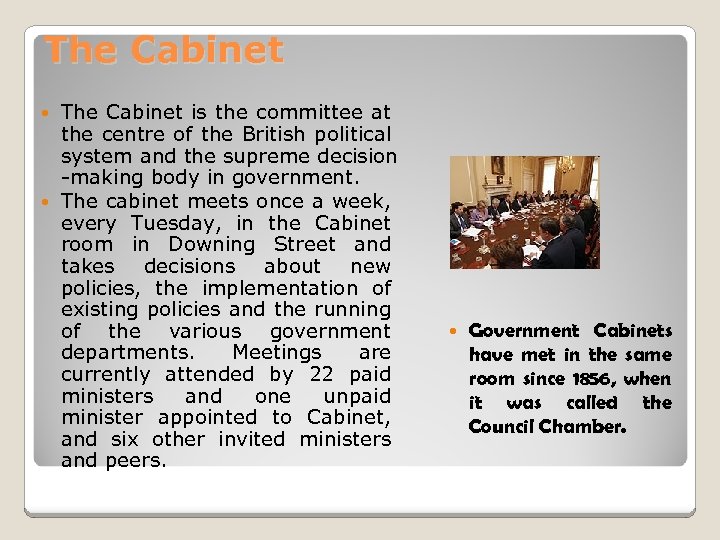 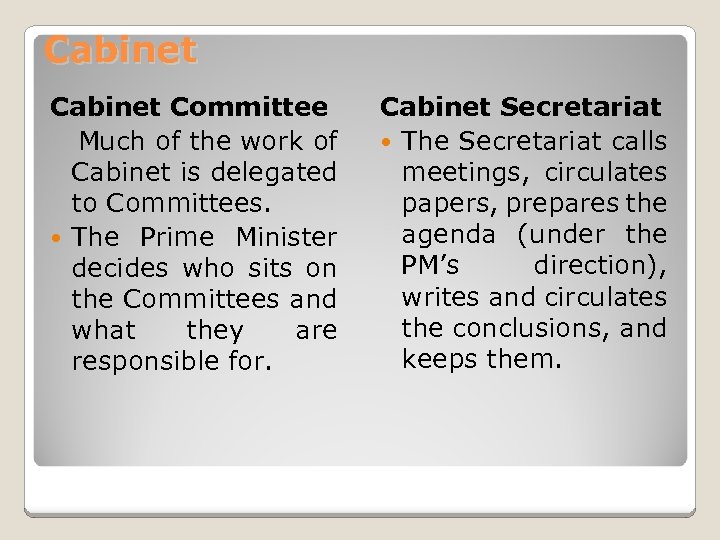 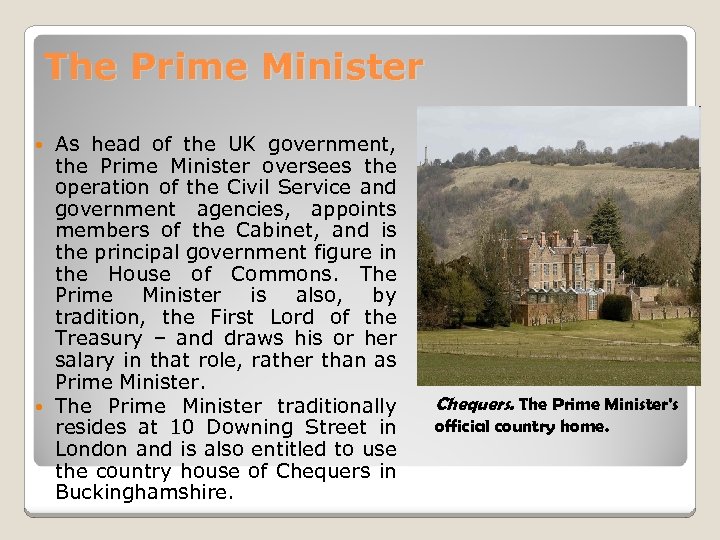 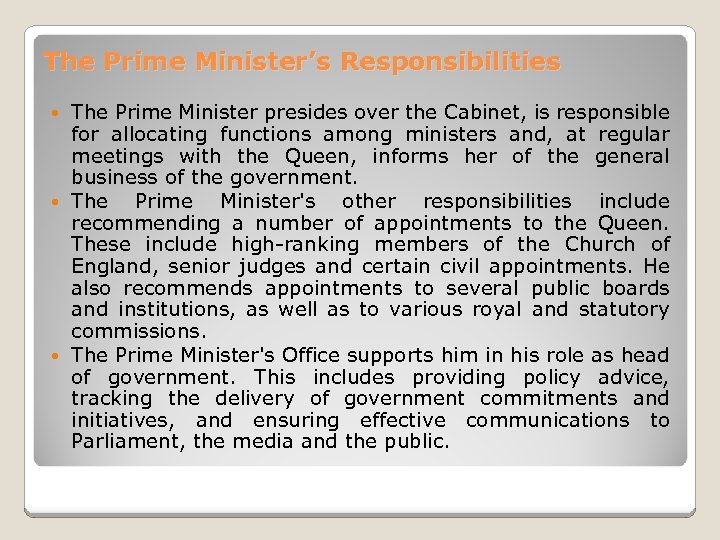 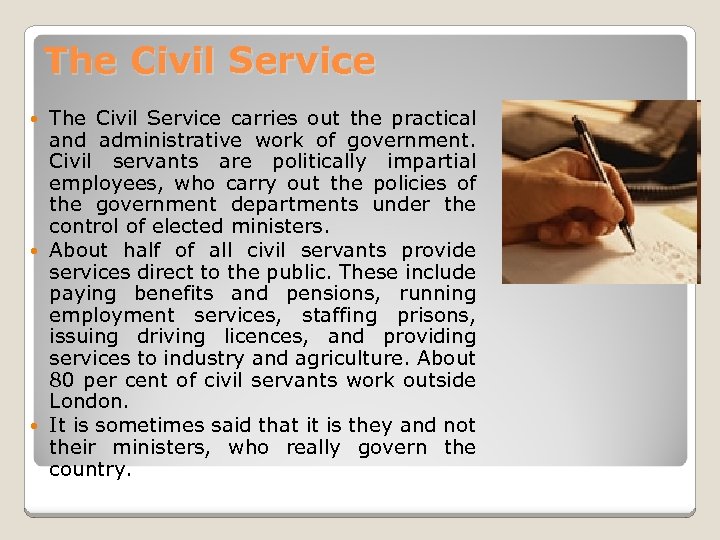 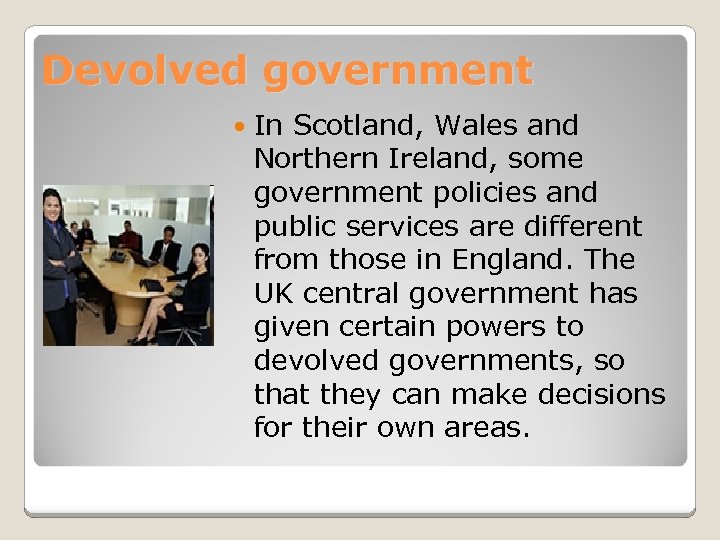 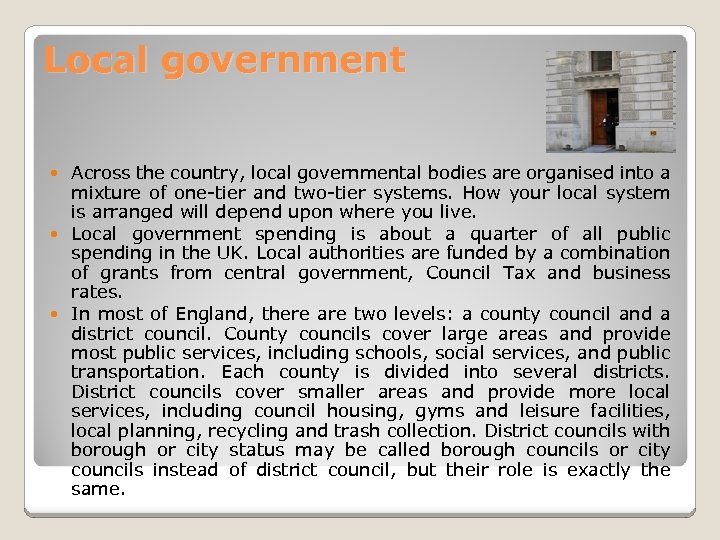 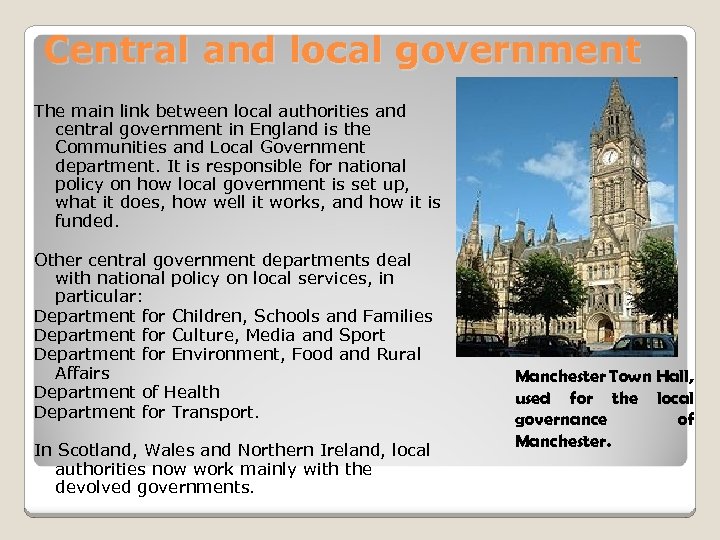 Скачать презентацию The government of the UK The Government

The government of the UK

Government ministers Most ministers are members of the House of Commons, although the government is also fully represented by ministers in the House of Lords. The composition of governments can vary both in the number of ministers and in the titles of some offices. New ministerial offices may be created, others may be abolished, and functions may be transferred from one minister to another. Tony Blair and Dick Cheney at the main door to 10 Downing Street, the Prime Minister's residence in London, on 11 March, 2002.

The Cabinet is the committee at the centre of the British political system and the supreme decision -making body in government. The cabinet meets once a week, every Tuesday, in the Cabinet room in Downing Street and takes decisions about new policies, the implementation of existing policies and the running of the various government departments. Meetings are currently attended by 22 paid ministers and one unpaid minister appointed to Cabinet, and six other invited ministers and peers. Government Cabinets have met in the same room since 1856, when it was called the Council Chamber.

Cabinet Committee Much of the work of Cabinet is delegated to Committees. The Prime Minister decides who sits on the Committees and what they are responsible for. Cabinet Secretariat The Secretariat calls meetings, circulates papers, prepares the agenda (under the PM’s direction), writes and circulates the conclusions, and keeps them.

The Prime Minister’s Responsibilities The Prime Minister presides over the Cabinet, is responsible for allocating functions among ministers and, at regular meetings with the Queen, informs her of the general business of the government. The Prime Minister's other responsibilities include recommending a number of appointments to the Queen. These include high-ranking members of the Church of England, senior judges and certain civil appointments. He also recommends appointments to several public boards and institutions, as well as to various royal and statutory commissions. The Prime Minister's Office supports him in his role as head of government. This includes providing policy advice, tracking the delivery of government commitments and initiatives, and ensuring effective communications to Parliament, the media and the public.

The Civil Service carries out the practical and administrative work of government. Civil servants are politically impartial employees, who carry out the policies of the government departments under the control of elected ministers. About half of all civil servants provide services direct to the public. These include paying benefits and pensions, running employment services, staffing prisons, issuing driving licences, and providing services to industry and agriculture. About 80 per cent of civil servants work outside London. It is sometimes said that it is they and not their ministers, who really govern the country.

Devolved government In Scotland, Wales and Northern Ireland, some government policies and public services are different from those in England. The UK central government has given certain powers to devolved governments, so that they can make decisions for their own areas.

Local government Across the country, local governmental bodies are organised into a mixture of one-tier and two-tier systems. How your local system is arranged will depend upon where you live. Local government spending is about a quarter of all public spending in the UK. Local authorities are funded by a combination of grants from central government, Council Tax and business rates. In most of England, there are two levels: a county council and a district council. County councils cover large areas and provide most public services, including schools, social services, and public transportation. Each county is divided into several districts. District councils cover smaller areas and provide more local services, including council housing, gyms and leisure facilities, local planning, recycling and trash collection. District councils with borough or city status may be called borough councils or city councils instead of district council, but their role is exactly the same.