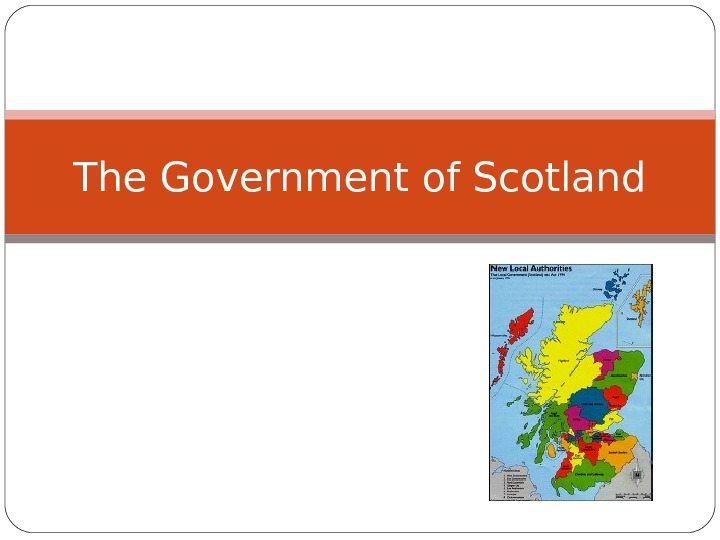 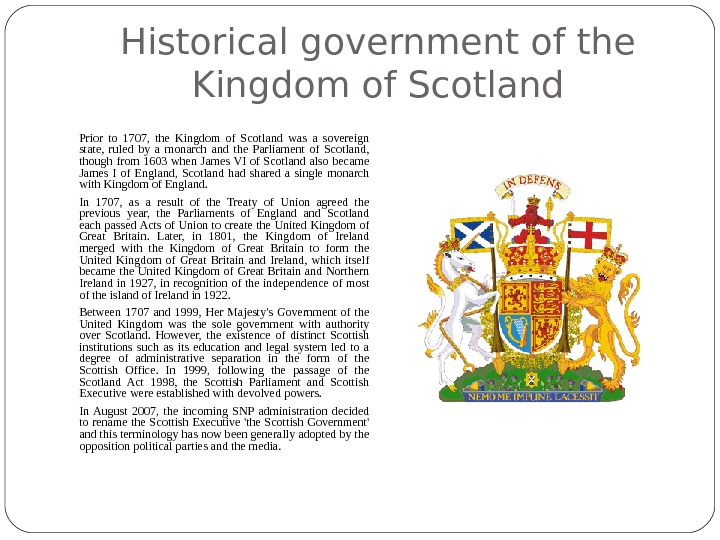 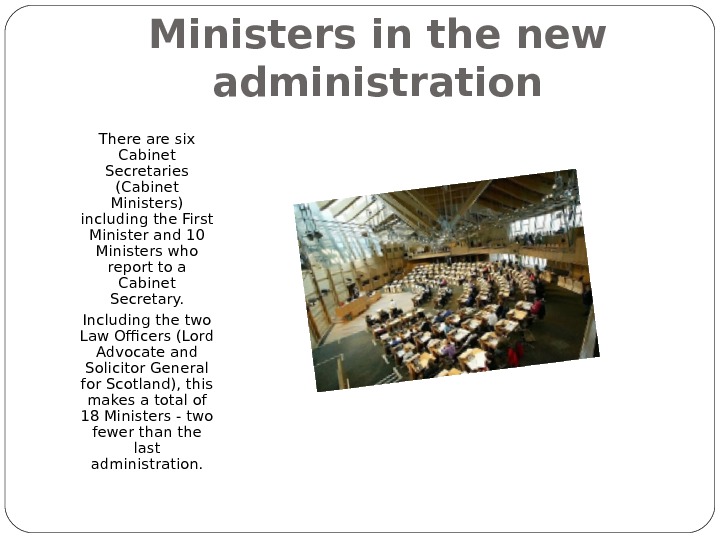 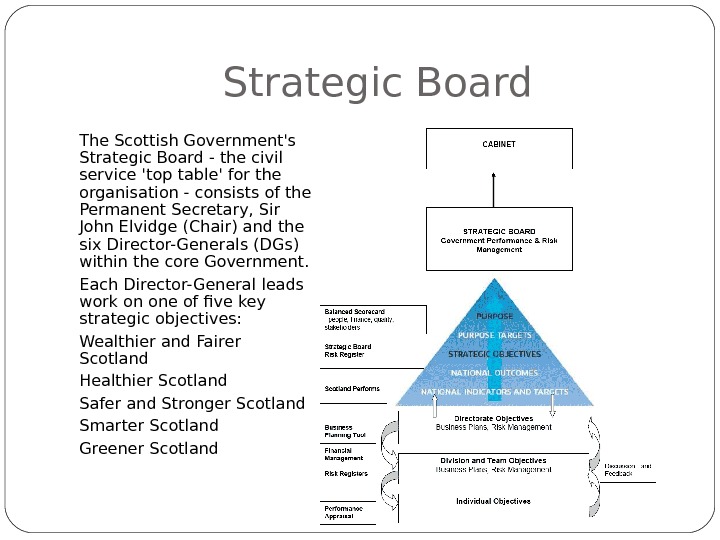 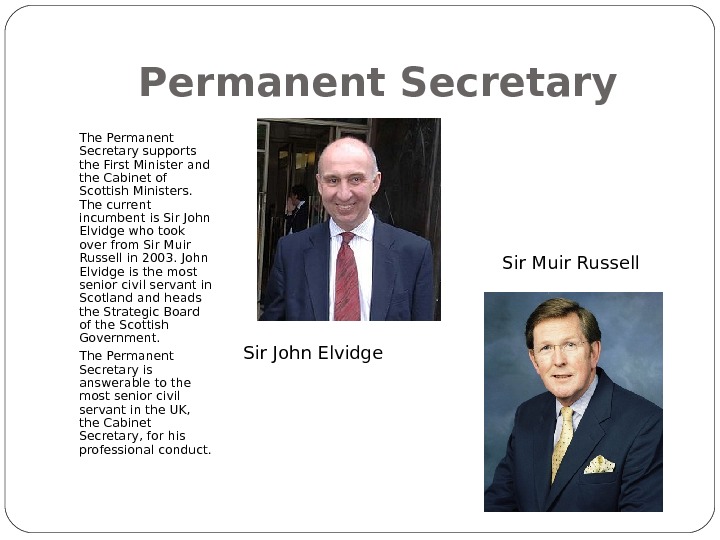 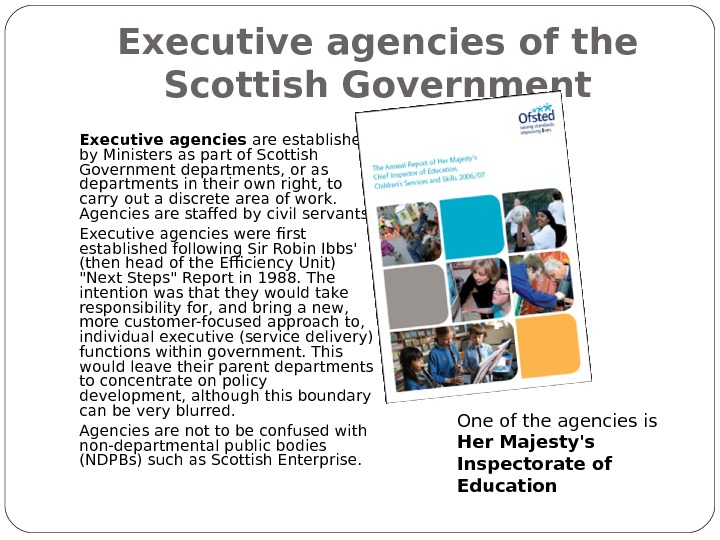 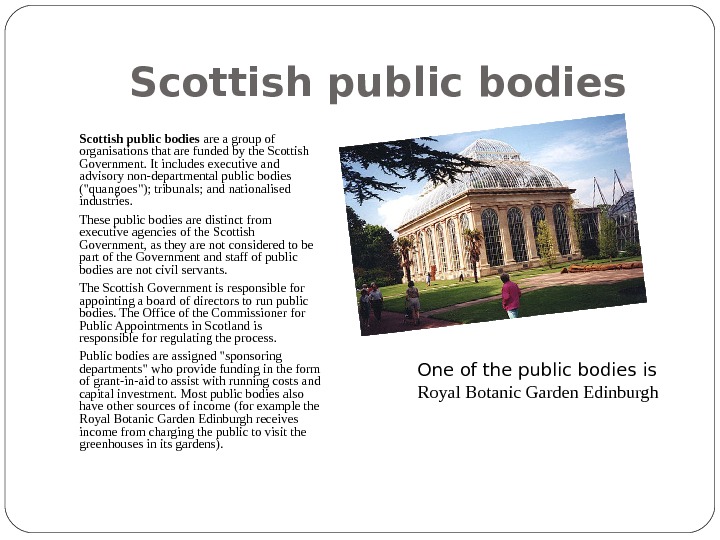 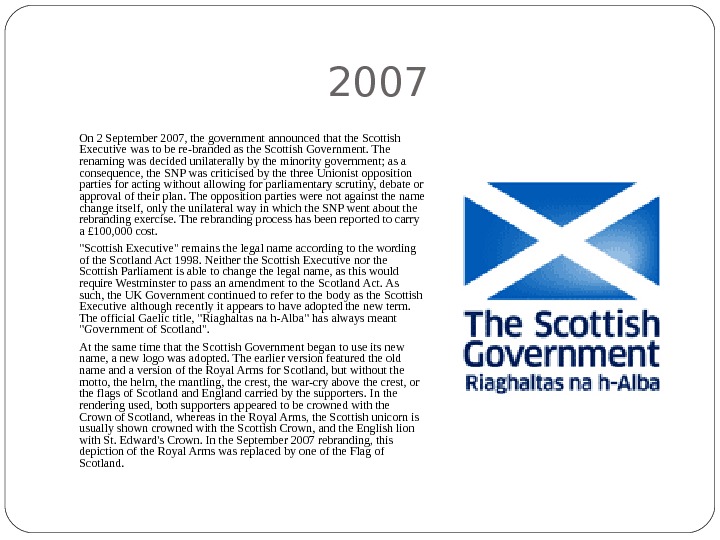 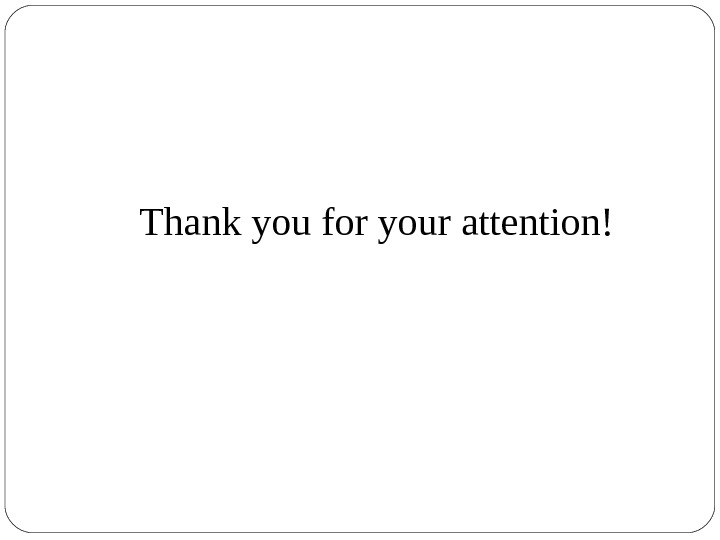 Скачать презентацию The Government of Scotland Historical government of

The Government of Scotland

Cabinet The Scottish Cabinet normally meets weekly (while Parliament is sitting), at Bute House, Charlotte Square, Edinburgh. The Cabinet consists of the First Minister, and other Scottish Ministers appointed under the terms of the Scotland Act 1998. The Scottish Government operates on the basis of collective responsiblity. This means that all decisions reached by Ministers, individually or collectively, are binding on all members of the Government. The Guide to Collective Decision Making details the arrangements for supporting collective decision making by Ministers. In performance of their duties, Cabinet Secretaries and Ministers are expected to behave according to the highest standards of constitutional and personal conduct. The Scottish Ministerial Code details the arrangements for the conduct, principles and precedents which may apply to Ministers. The Scottish Cabinet is supported by the Cabinet Secretariat which works on behalf of all Ministers and all Departments in the Government to manage Cabinet business and facilitate collective decision-making. St Andrew’s House

Executive agencies of the Scottish Government Executive agencies are established by Ministers as part of Scottish Government departments, or as departments in their own right, to carry out a discrete area of work. Agencies are staffed by civil servants. Executive agencies were first established following Sir Robin Ibbs’ (then head of the Efficiency Unit) «Next Steps» Report in 1988. The intention was that they would take responsibility for, and bring a new, more customer-focused approach to, individual executive (service delivery) functions within government. This would leave their parent departments to concentrate on policy development, although this boundary can be very blurred. Agencies are not to be confused with non-departmental public bodies (NDPBs) such as Scottish Enterprise. One of the agencies is Her Majesty’s Inspectorate of Education

2007 On 2 September 2007, the government announced that the Scottish Executive was to be re-branded as the Scottish Government. The renaming was decided unilaterally by the minority government; as a consequence, the SNP was criticised by the three Unionist opposition parties for acting without allowing for parliamentary scrutiny, debate or approval of their plan. The opposition parties were not against the name change itself, only the unilateral way in which the SNP went about the rebranding exercise. The rebranding process has been reported to carry a £ 100, 000 cost. «Scottish Executive» remains the legal name according to the wording of the Scotland Act 1998. Neither the Scottish Executive nor the Scottish Parliament is able to change the legal name, as this would require Westminster to pass an amendment to the Scotland Act. As such, the UK Government continued to refer to the body as the Scottish Executive although recently it appears to have adopted the new term. The official Gaelic title, «Riaghaltas na h-Alba» has always meant «Government of Scotland». At the same time that the Scottish Government began to use its new name, a new logo was adopted. The earlier version featured the old name and a version of the Royal Arms for Scotland, but without the motto, the helm, the mantling, the crest, the war-cry above the crest, or the flags of Scotland England carried by the supporters. In the rendering used, both supporters appeared to be crowned with the Crown of Scotland, whereas in the Royal Arms, the Scottish unicorn is usually shown crowned with the Scottish Crown, and the English lion with St. Edward’s Crown. In the September 2007 rebranding, this depiction of the Royal Arms was replaced by one of the Flag of Scotland.