The Future of Our Planet The obliteration 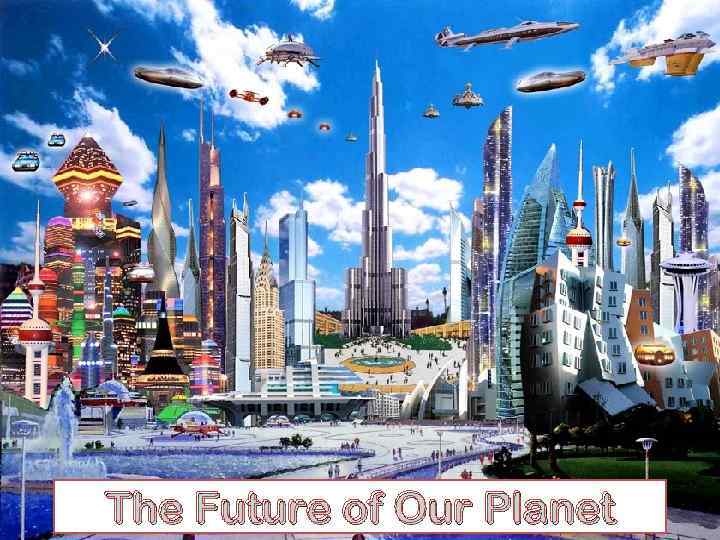 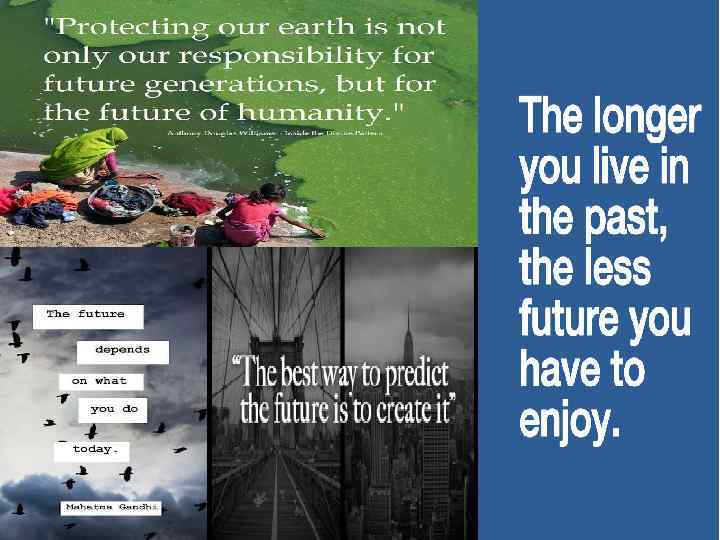 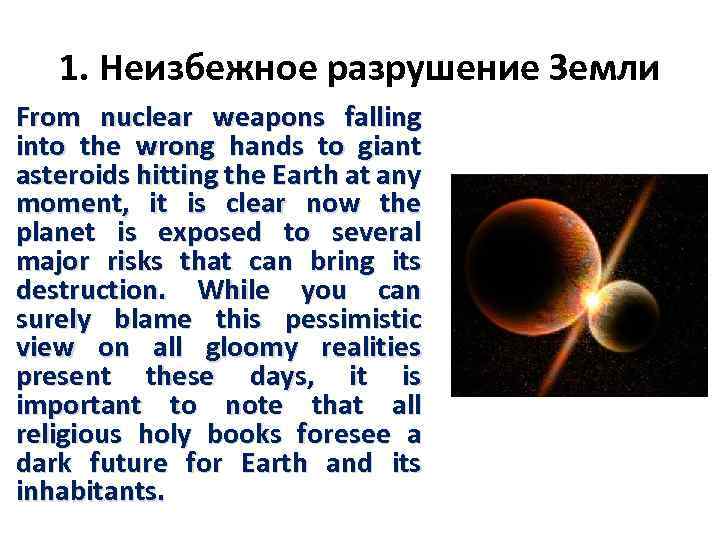 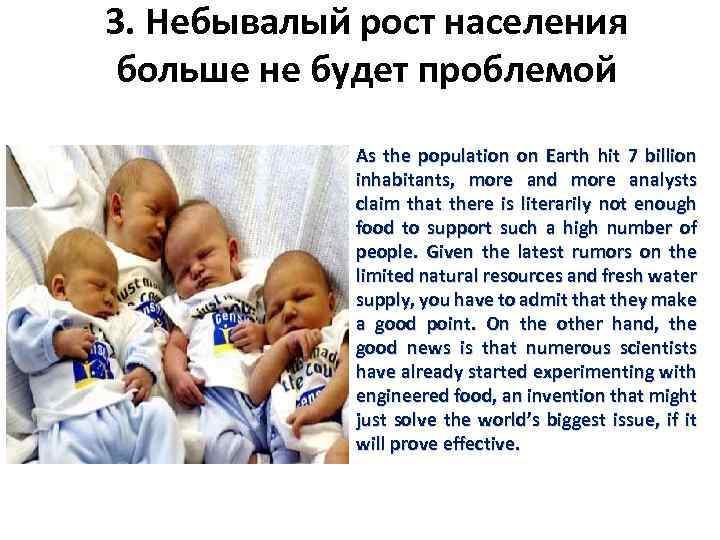 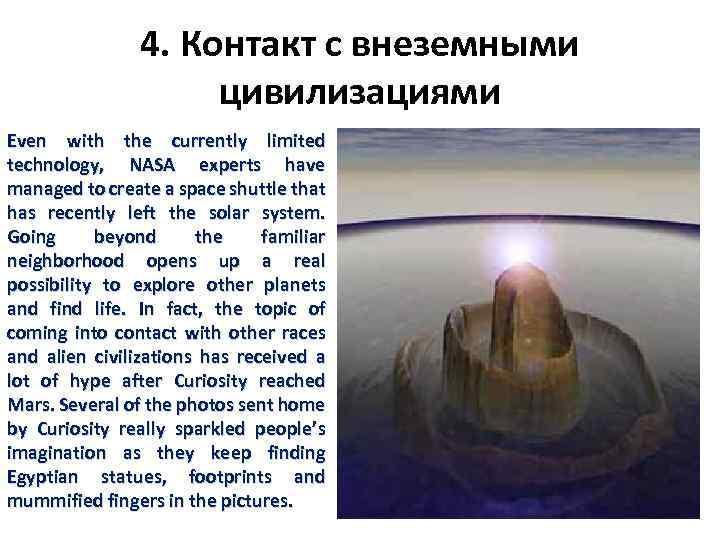 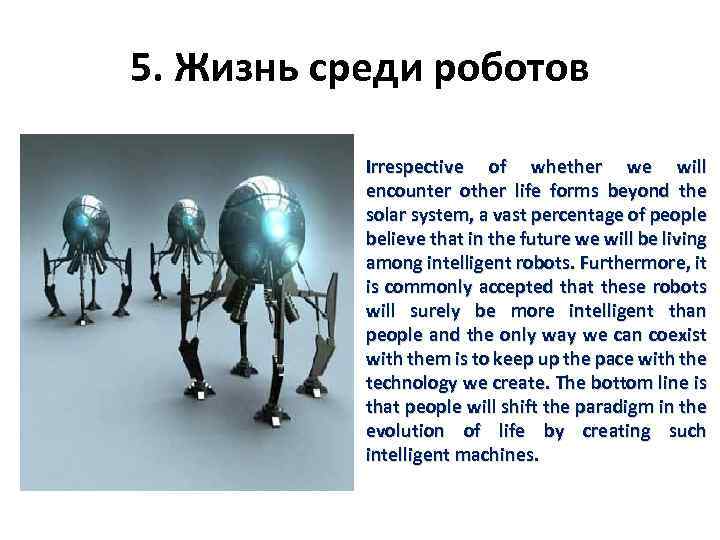 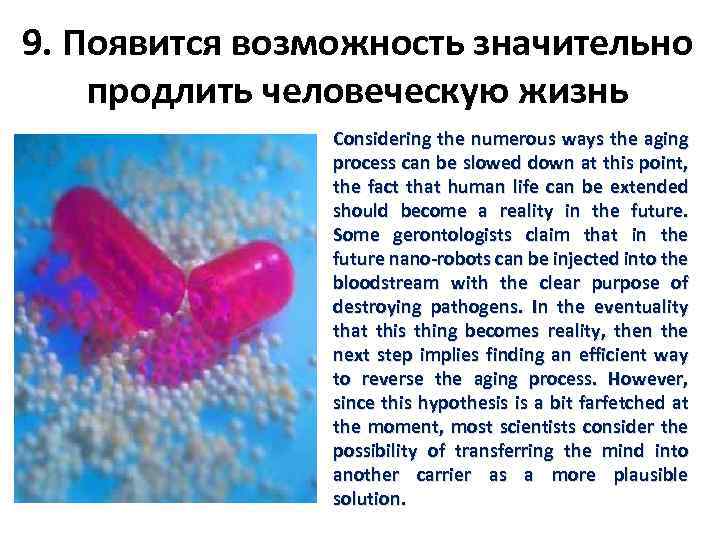 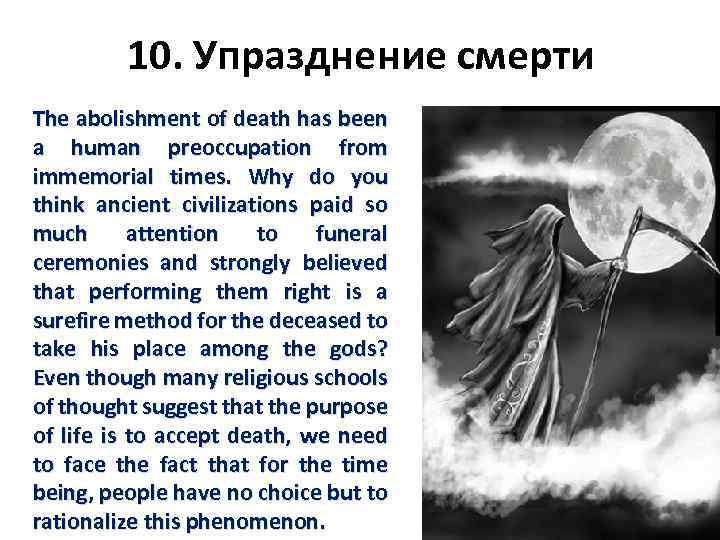 Скачать презентацию The Future of Our Planet The obliteration

The Future of Our Planet.pptx

The Future of Our Planet

1. Неизбежное разрушение Земли From nuclear weapons falling into the wrong hands to giant asteroids hitting the Earth at any moment, it is clear now the planet is exposed to several major risks that can bring its destruction. While you can surely blame this pessimistic view on all gloomy realities present these days, it is important to note that all religious holy books foresee a dark future for Earth and its inhabitants.

2. Эффективные и безопасные для окружающей среды энергетические решения At this point, most people and governments are aware that our hectic consumption behavior has a negative impact on the environment and is possibly the main cause of the extreme climate changes. However, even as we speak efforts are being made in identifying a renewable, less polluting source of energy to meet the entire globe’s needs. Take the European Union for instance, whose experts are working diligently on finding a method to employ wind and solar power throughout all member states.

3. Небывалый рост населения больше не будет проблемой As the population on Earth hit 7 billion inhabitants, more and more analysts claim that there is literarily not enough food to support such a high number of people. Given the latest rumors on the limited natural resources and fresh water supply, you have to admit that they make a good point. On the other hand, the good news is that numerous scientists have already started experimenting with engineered food, an invention that might just solve the world’s biggest issue, if it will prove effective.

4. Контакт с внеземными цивилизациями Even with the currently limited technology, NASA experts have managed to create a space shuttle that has recently left the solar system. Going beyond the familiar neighborhood opens up a real possibility to explore other planets and find life. In fact, the topic of coming into contact with other races and alien civilizations has received a lot of hype after Curiosity reached Mars. Several of the photos sent home by Curiosity really sparkled people’s imagination as they keep finding Egyptian statues, footprints and mummified fingers in the pictures.

5. Жизнь среди роботов Irrespective of whether we will encounter other life forms beyond the solar system, a vast percentage of people believe that in the future we will be living among intelligent robots. Furthermore, it is commonly accepted that these robots will surely be more intelligent than people and the only way we can coexist with them is to keep up the pace with the technology we create. The bottom line is that people will shift the paradigm in the evolution of life by creating such intelligent machines.

6. Технологии превзойдут любое воображение There is no doubt that in the near and far future there will be some incredible technological advancements. However, there is no way anyone can predict what we will be able to achieve with the technology we will posses in 1000 years for instance. For the time being, people are still intrigued by the tremendous potential of nanotechnology. Who knows, perhaps nano can one day become an answer to serious medical problems and the implants will have the potential to replace tissue and organs in the human body.

7. У нас будет карта космоса This prediction is actually very achievable at this point, considering that numerous expert claim they have mapped out most of the known cosmos. However, what is expected in the future is to foretell the major cosmic events that could have potentially negative consequences for our home planet. In this light, the exploration of the universe does not consists of the mechanics of the cosmos, but rather in finding suitable planet that can host life as we know it.

8. Космические путешествия станут обычным явлением Believe it or not, some astronomers claim that we already have the necessary technology to travel through space. Why aren’t we going on vacation on Jupiter or Saturn then? Well, the main problem with space travel is that scientists have yet to discover a method of protecting the human body from the hazardous gases and radiations found out there. Therefore, once this issue will be solved, space travel will become a commodity.

9. Появится возможность значительно продлить человеческую жизнь Considering the numerous ways the aging process can be slowed down at this point, the fact that human life can be extended should become a reality in the future. Some gerontologists claim that in the future nano-robots can be injected into the bloodstream with the clear purpose of destroying pathogens. In the eventuality that this thing becomes reality, then the next step implies finding an efficient way to reverse the aging process. However, since this hypothesis is a bit farfetched at the moment, most scientists consider the possibility of transferring the mind into another carrier as a more plausible solution.

10. Упразднение смерти The abolishment of death has been a human preoccupation from immemorial times. Why do you think ancient civilizations paid so much attention to funeral ceremonies and strongly believed that performing them right is a surefire method for the deceased to take his place among the gods? Even though many religious schools of thought suggest that the purpose of life is to accept death, we need to face the fact that for the time being, people have no choice but to rationalize this phenomenon.