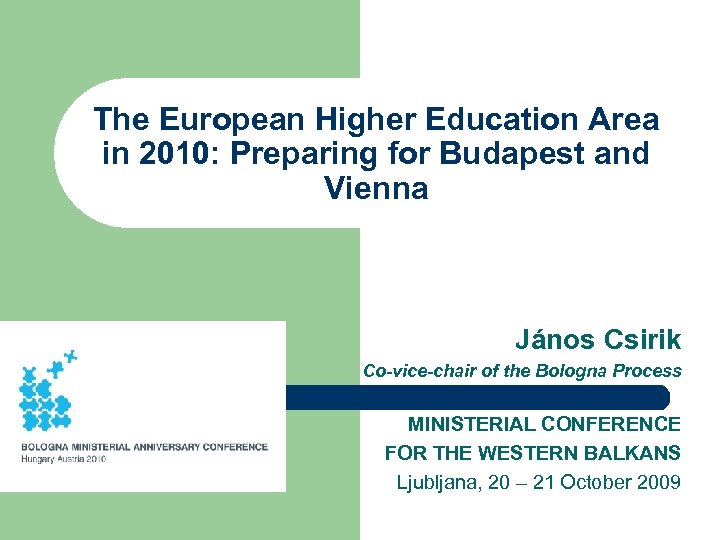 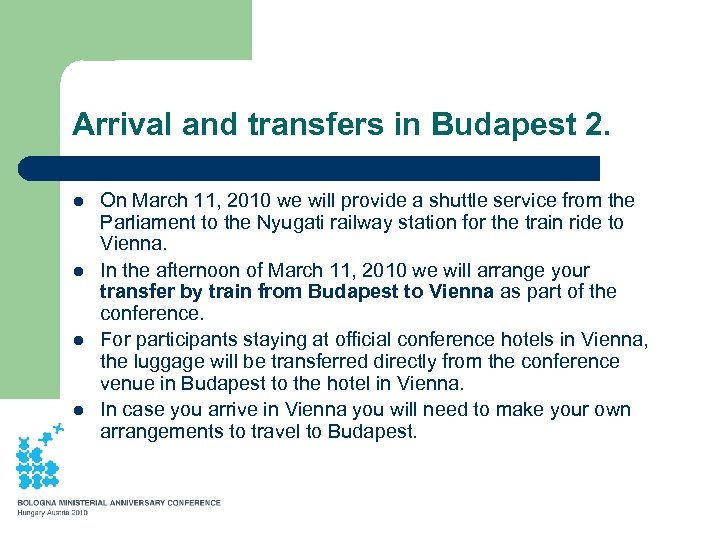 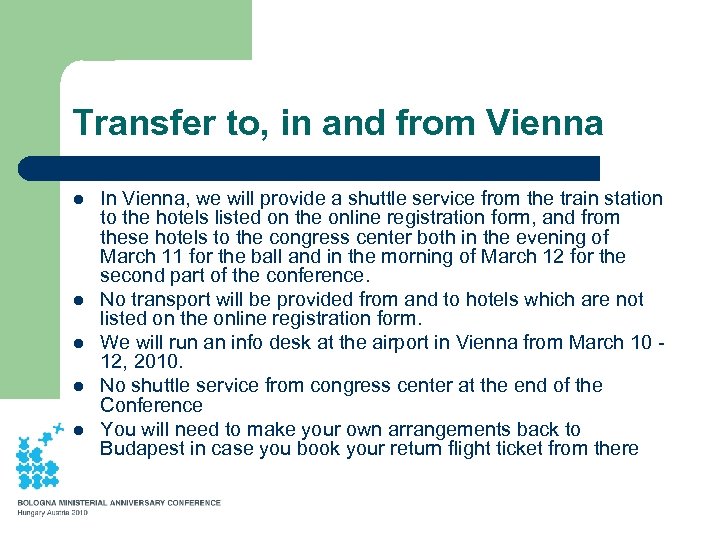 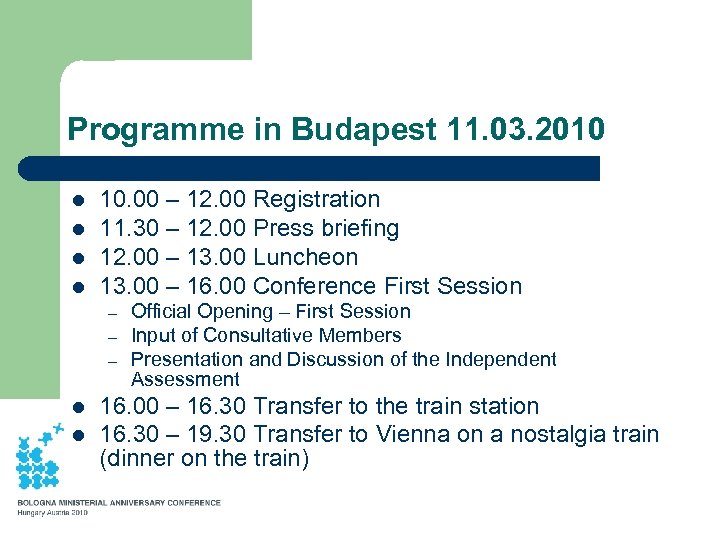 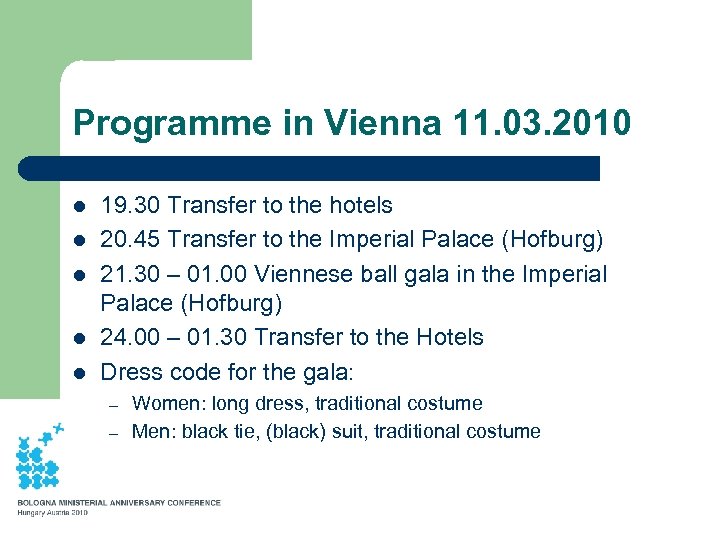 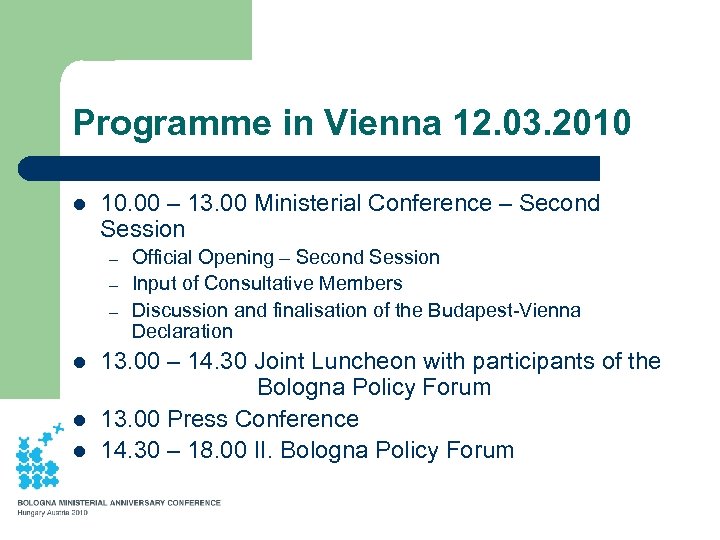 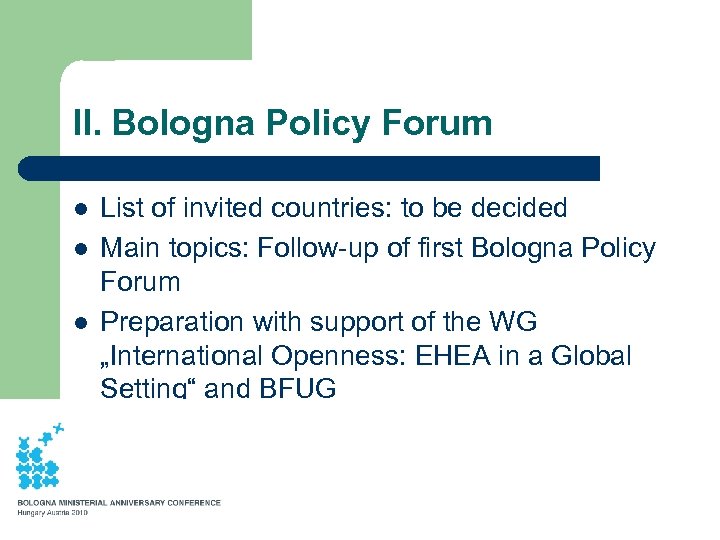 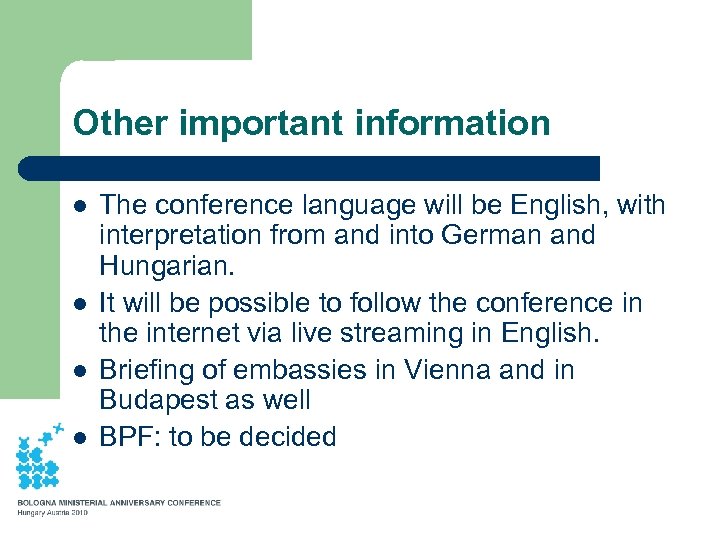 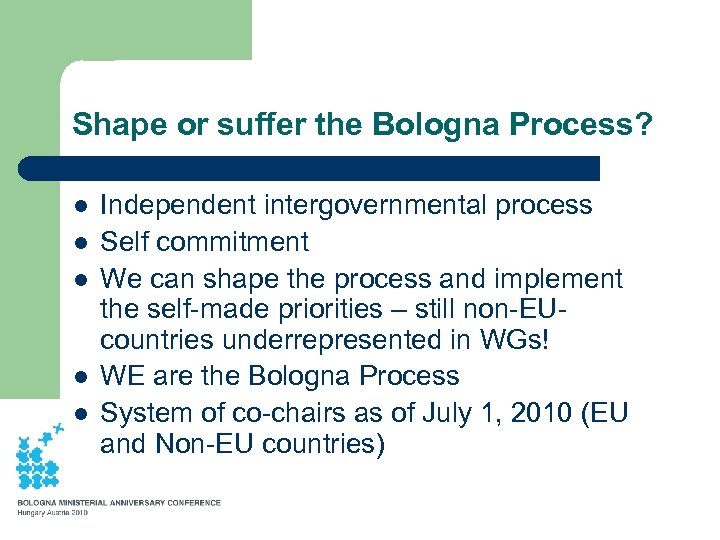 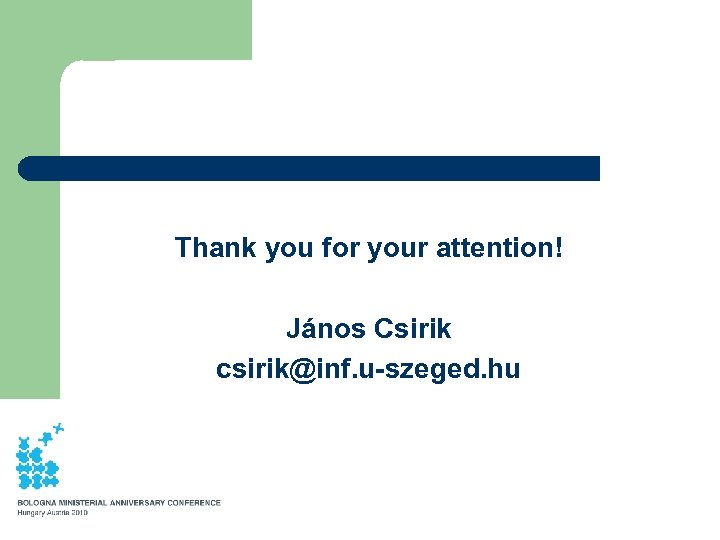 The European Higher Education Area in 2010: Preparing for Budapest and Vienna János Csirik Co-vice-chair of the Bologna Process MINISTERIAL CONFERENCE FOR THE WESTERN BALKANS Ljubljana, 20 – 21 October 2009

Visa information l l l If you need a Schengen visa, please contact [email protected] hu to receive a personalised invitation letter, which is only issued upon registration. ASAP! Website of the Ministry of Foreign Affairs of the Republic of Hungary: http: //www. mfa. gov. hu/kum/en/bal/consular_services/Entry_of_ Foreigners_to_Hungary/ Website of the Federal Ministry for European and International Affairs of Austria http: //www. bmeia. gv. at/en/foreign-ministry/service/foreignrepresentations-in-austria-in-german. html

Arrival and transfers in Budapest 1. l l l l Info desk at the airport in Budapest on March 10 and 11, 2010. No shuttle service organised fom airport to hotels No info desks at the railway stations Info desks at the hotels Sofitel and Mercure Korona and the Parlament On March 11, 2010 we will provide a shuttle service from the two hotels (Sofitel and Mercure Korona) in Budapest to the Parliament Individual arrival by car: no entrance and parking at the Parliament (nearest parking: Szabadság tér – subterranean garage) Embassies’ cars: entrance possible, plate number information!

Arrival and transfers in Budapest 2. l l On March 11, 2010 we will provide a shuttle service from the Parliament to the Nyugati railway station for the train ride to Vienna. In the afternoon of March 11, 2010 we will arrange your transfer by train from Budapest to Vienna as part of the conference. For participants staying at official conference hotels in Vienna, the luggage will be transferred directly from the conference venue in Budapest to the hotel in Vienna. In case you arrive in Vienna you will need to make your own arrangements to travel to Budapest.

Transfer to, in and from Vienna l l l In Vienna, we will provide a shuttle service from the train station to the hotels listed on the online registration form, and from these hotels to the congress center both in the evening of March 11 for the ball and in the morning of March 12 for the second part of the conference. No transport will be provided from and to hotels which are not listed on the online registration form. We will run an info desk at the airport in Vienna from March 10 12, 2010. No shuttle service from congress center at the end of the Conference You will need to make your own arrangements back to Budapest in case you book your return flight ticket from there

Other important information l l The conference language will be English, with interpretation from and into German and Hungarian. It will be possible to follow the conference in the internet via live streaming in English. Briefing of embassies in Vienna and in Budapest as well BPF: to be decided

Shape or suffer the Bologna Process? l l l Independent intergovernmental process Self commitment We can shape the process and implement the self-made priorities – still non-EUcountries underrepresented in WGs! WE are the Bologna Process System of co-chairs as of July 1, 2010 (EU and Non-EU countries)