The European Convention on Human Rights in the 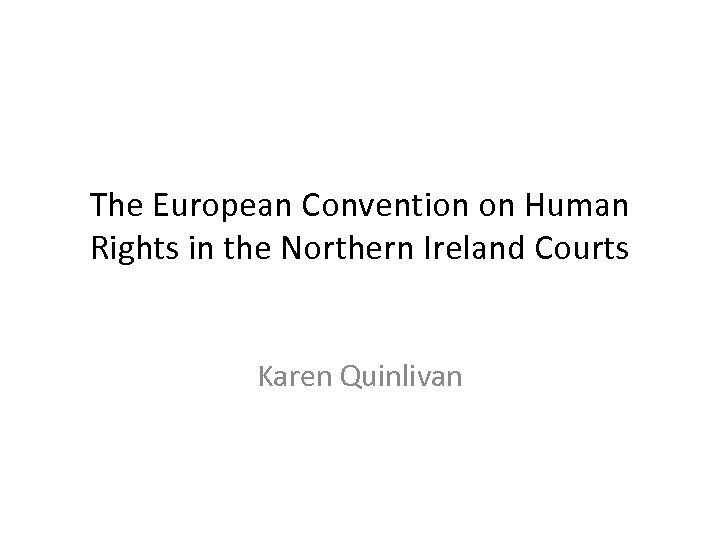 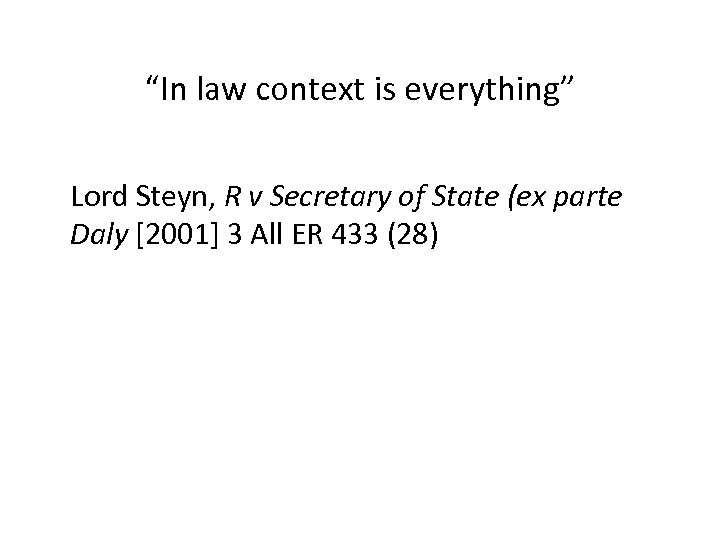 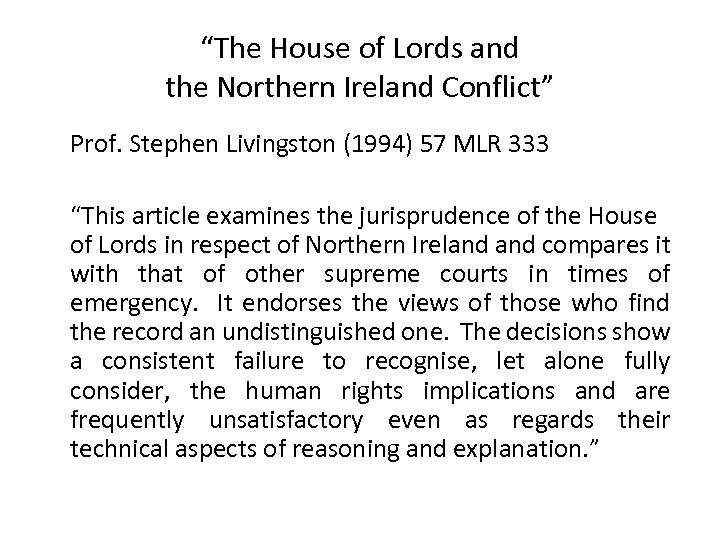 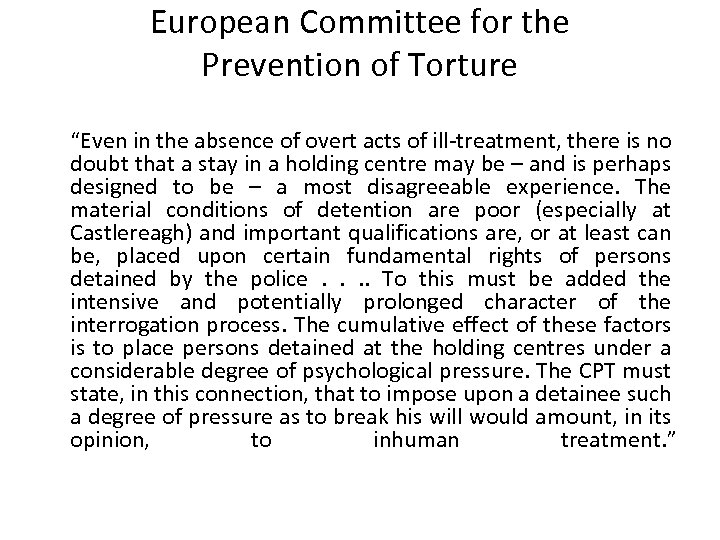 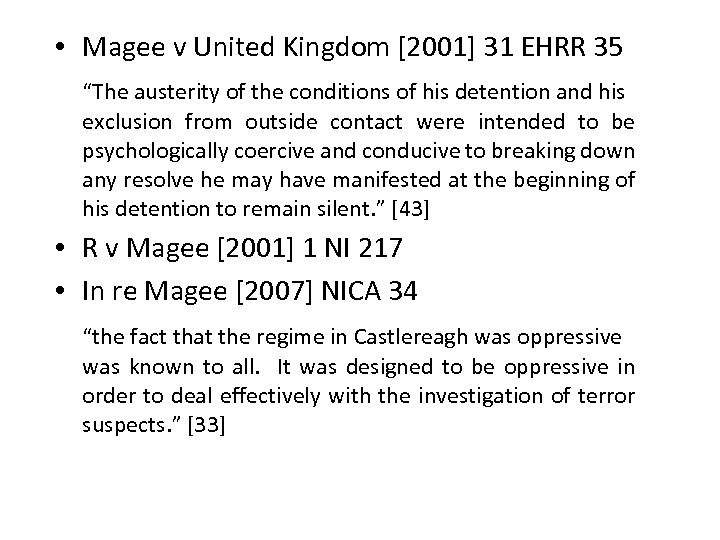 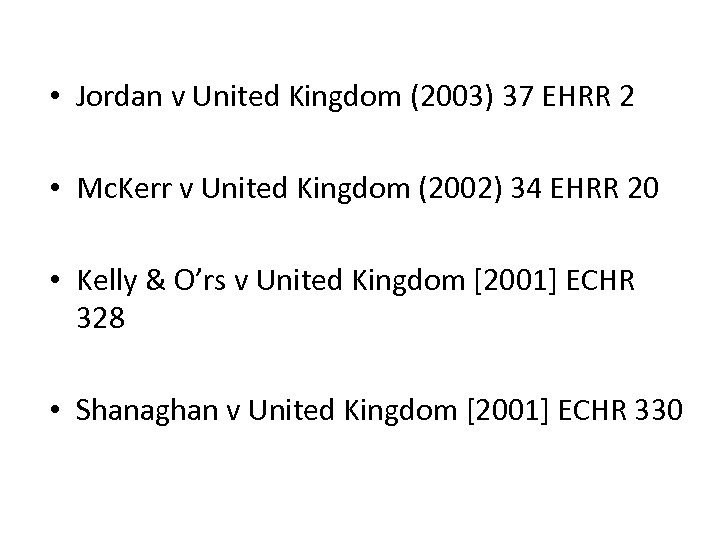 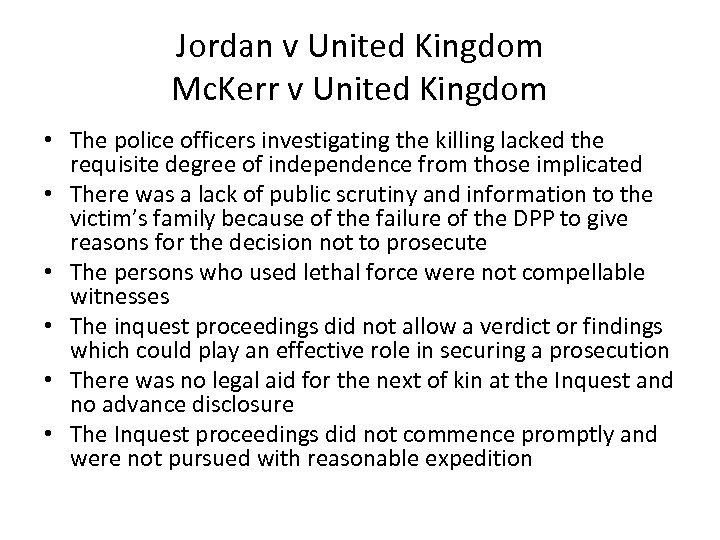 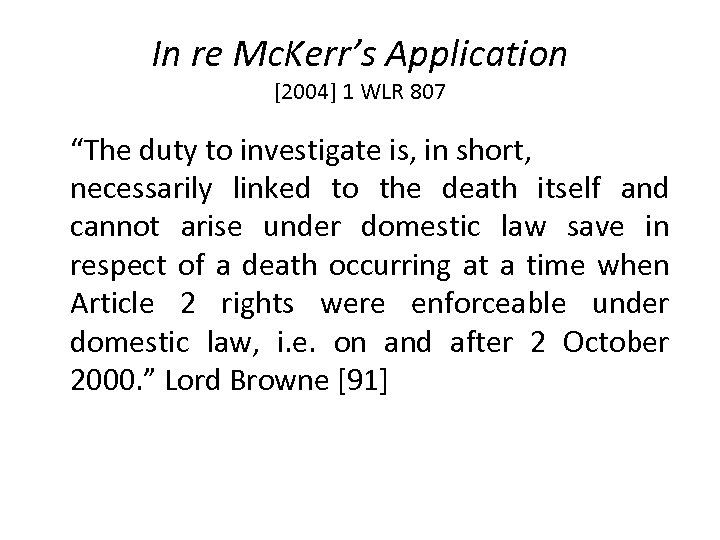 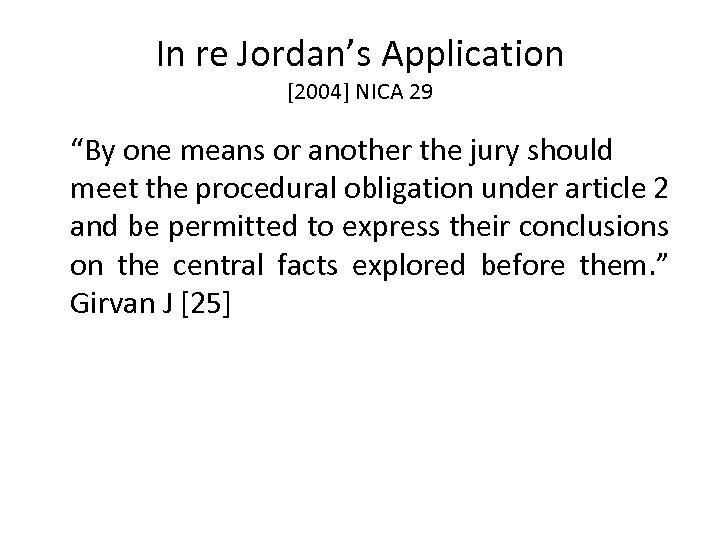 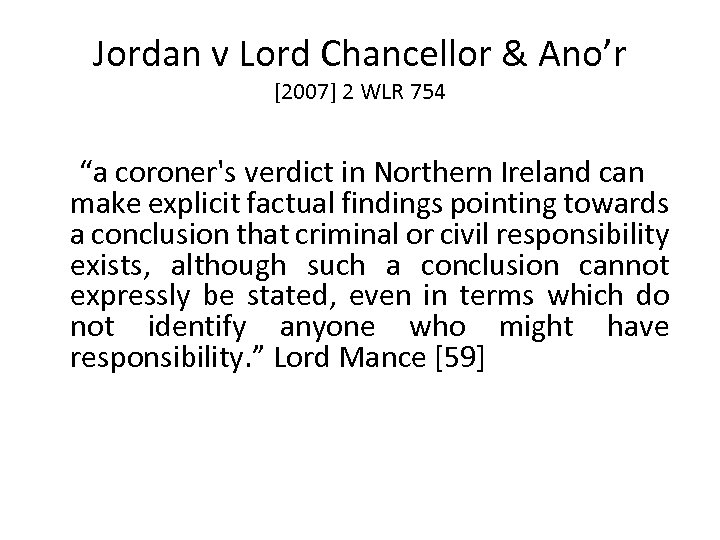 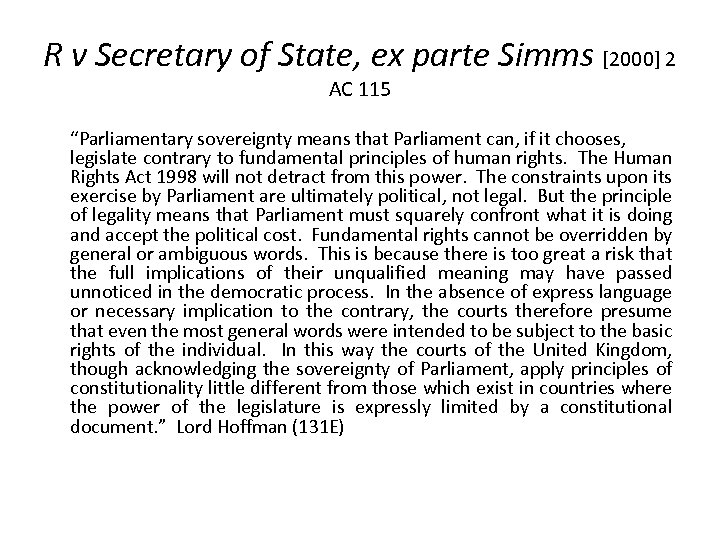 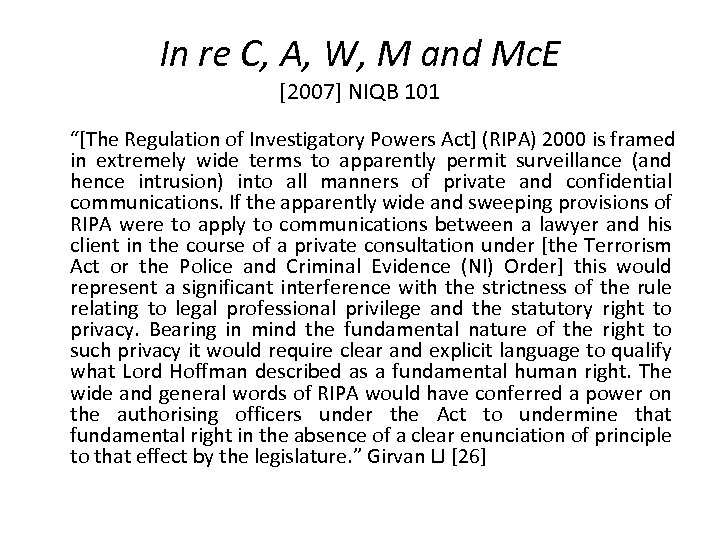 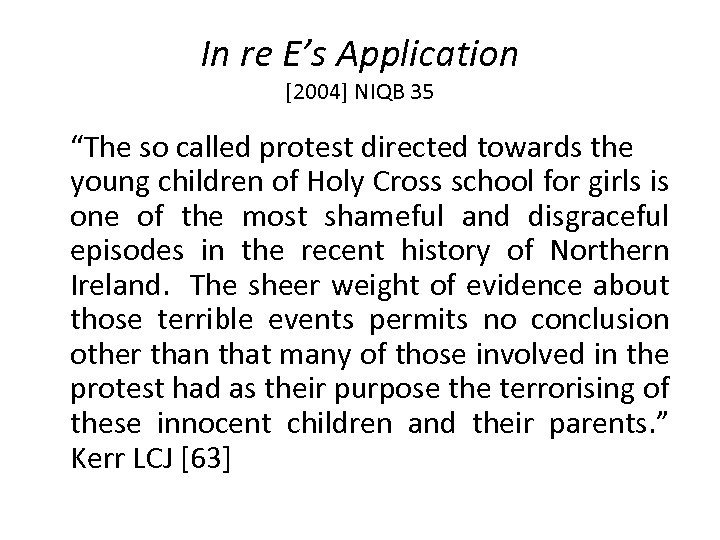 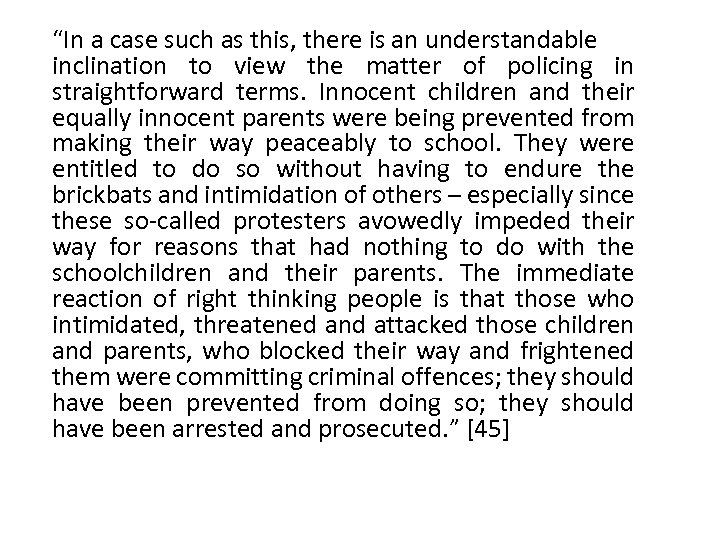 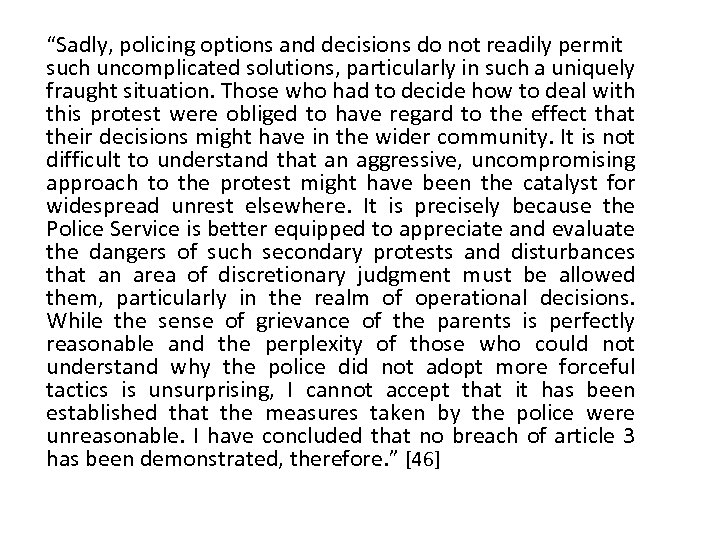 Скачать презентацию The European Convention on Human Rights in the

“The House of Lords and the Northern Ireland Conflict” Prof. Stephen Livingston (1994) 57 MLR 333 “This article examines the jurisprudence of the House of Lords in respect of Northern Ireland compares it with that of other supreme courts in times of emergency. It endorses the views of those who find the record an undistinguished one. The decisions show a consistent failure to recognise, let alone fully consider, the human rights implications and are frequently unsatisfactory even as regards their technical aspects of reasoning and explanation. ”

European Committee for the Prevention of Torture “Even in the absence of overt acts of ill-treatment, there is no doubt that a stay in a holding centre may be – and is perhaps designed to be – a most disagreeable experience. The material conditions of detention are poor (especially at Castlereagh) and important qualifications are, or at least can be, placed upon certain fundamental rights of persons detained by the police. . To this must be added the intensive and potentially prolonged character of the interrogation process. The cumulative effect of these factors is to place persons detained at the holding centres under a considerable degree of psychological pressure. The CPT must state, in this connection, that to impose upon a detainee such a degree of pressure as to break his will would amount, in its opinion, to inhuman treatment. ”

• Magee v United Kingdom [2001] 31 EHRR 35 “The austerity of the conditions of his detention and his exclusion from outside contact were intended to be psychologically coercive and conducive to breaking down any resolve he may have manifested at the beginning of his detention to remain silent. ” [43] • R v Magee [2001] 1 NI 217 • In re Magee [2007] NICA 34 “the fact that the regime in Castlereagh was oppressive was known to all. It was designed to be oppressive in order to deal effectively with the investigation of terror suspects. ” [33]

Jordan v United Kingdom Mc. Kerr v United Kingdom • The police officers investigating the killing lacked the requisite degree of independence from those implicated • There was a lack of public scrutiny and information to the victim’s family because of the failure of the DPP to give reasons for the decision not to prosecute • The persons who used lethal force were not compellable witnesses • The inquest proceedings did not allow a verdict or findings which could play an effective role in securing a prosecution • There was no legal aid for the next of kin at the Inquest and no advance disclosure • The Inquest proceedings did not commence promptly and were not pursued with reasonable expedition

In re Mc. Kerr’s Application [2004] 1 WLR 807 “The duty to investigate is, in short, necessarily linked to the death itself and cannot arise under domestic law save in respect of a death occurring at a time when Article 2 rights were enforceable under domestic law, i. e. on and after 2 October 2000. ” Lord Browne [91]

In re Jordan’s Application [2004] NICA 29 “By one means or another the jury should meet the procedural obligation under article 2 and be permitted to express their conclusions on the central facts explored before them. ” Girvan J [25]

Jordan v Lord Chancellor & Ano’r [2007] 2 WLR 754 “a coroner's verdict in Northern Ireland can make explicit factual findings pointing towards a conclusion that criminal or civil responsibility exists, although such a conclusion cannot expressly be stated, even in terms which do not identify anyone who might have responsibility. ” Lord Mance [59]

R v Secretary of State, ex parte Simms [2000] 2 AC 115 “Parliamentary sovereignty means that Parliament can, if it chooses, legislate contrary to fundamental principles of human rights. The Human Rights Act 1998 will not detract from this power. The constraints upon its exercise by Parliament are ultimately political, not legal. But the principle of legality means that Parliament must squarely confront what it is doing and accept the political cost. Fundamental rights cannot be overridden by general or ambiguous words. This is because there is too great a risk that the full implications of their unqualified meaning may have passed unnoticed in the democratic process. In the absence of express language or necessary implication to the contrary, the courts therefore presume that even the most general words were intended to be subject to the basic rights of the individual. In this way the courts of the United Kingdom, though acknowledging the sovereignty of Parliament, apply principles of constitutionality little different from those which exist in countries where the power of the legislature is expressly limited by a constitutional document. ” Lord Hoffman (131 E)

In re C, A, W, M and Mc. E [2007] NIQB 101 “[The Regulation of Investigatory Powers Act] (RIPA) 2000 is framed in extremely wide terms to apparently permit surveillance (and hence intrusion) into all manners of private and confidential communications. If the apparently wide and sweeping provisions of RIPA were to apply to communications between a lawyer and his client in the course of a private consultation under [the Terrorism Act or the Police and Criminal Evidence (NI) Order] this would represent a significant interference with the strictness of the rule relating to legal professional privilege and the statutory right to privacy. Bearing in mind the fundamental nature of the right to such privacy it would require clear and explicit language to qualify what Lord Hoffman described as a fundamental human right. The wide and general words of RIPA would have conferred a power on the authorising officers under the Act to undermine that fundamental right in the absence of a clear enunciation of principle to that effect by the legislature. ” Girvan LJ [26]

In re E’s Application [2004] NIQB 35 “The so called protest directed towards the young children of Holy Cross school for girls is one of the most shameful and disgraceful episodes in the recent history of Northern Ireland. The sheer weight of evidence about those terrible events permits no conclusion other than that many of those involved in the protest had as their purpose the terrorising of these innocent children and their parents. ” Kerr LCJ [63]

“In a case such as this, there is an understandable inclination to view the matter of policing in straightforward terms. Innocent children and their equally innocent parents were being prevented from making their way peaceably to school. They were entitled to do so without having to endure the brickbats and intimidation of others – especially since these so-called protesters avowedly impeded their way for reasons that had nothing to do with the schoolchildren and their parents. The immediate reaction of right thinking people is that those who intimidated, threatened and attacked those children and parents, who blocked their way and frightened them were committing criminal offences; they should have been prevented from doing so; they should have been arrested and prosecuted. ” [45]

“Sadly, policing options and decisions do not readily permit such uncomplicated solutions, particularly in such a uniquely fraught situation. Those who had to decide how to deal with this protest were obliged to have regard to the effect that their decisions might have in the wider community. It is not difficult to understand that an aggressive, uncompromising approach to the protest might have been the catalyst for widespread unrest elsewhere. It is precisely because the Police Service is better equipped to appreciate and evaluate the dangers of such secondary protests and disturbances that an area of discretionary judgment must be allowed them, particularly in the realm of operational decisions. While the sense of grievance of the parents is perfectly reasonable and the perplexity of those who could not understand why the police did not adopt more forceful tactics is unsurprising, I cannot accept that it has been established that the measures taken by the police were unreasonable. I have concluded that no breach of article 3 has been demonstrated, therefore. ” [46]