The Emergence of a World Power The 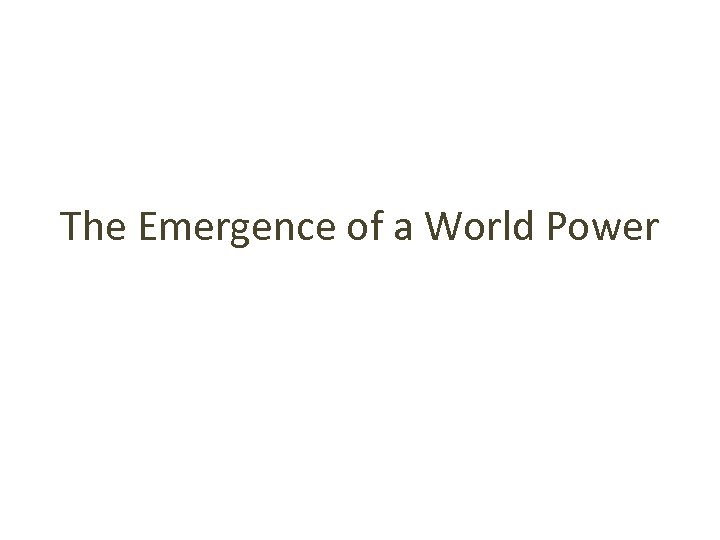 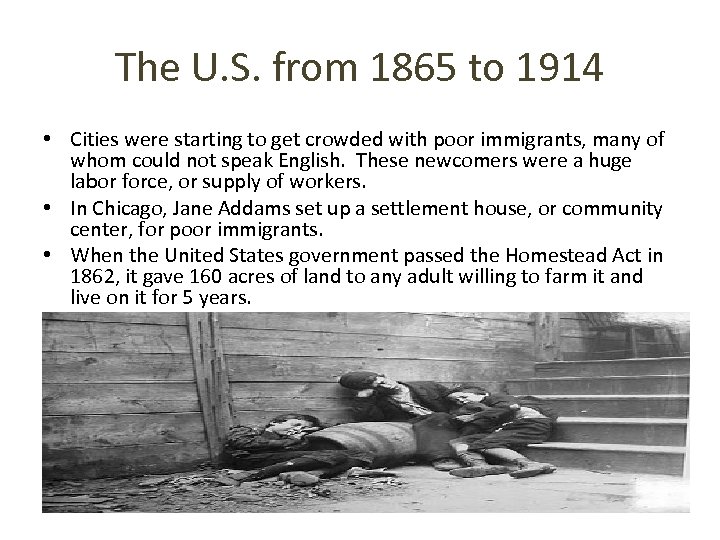 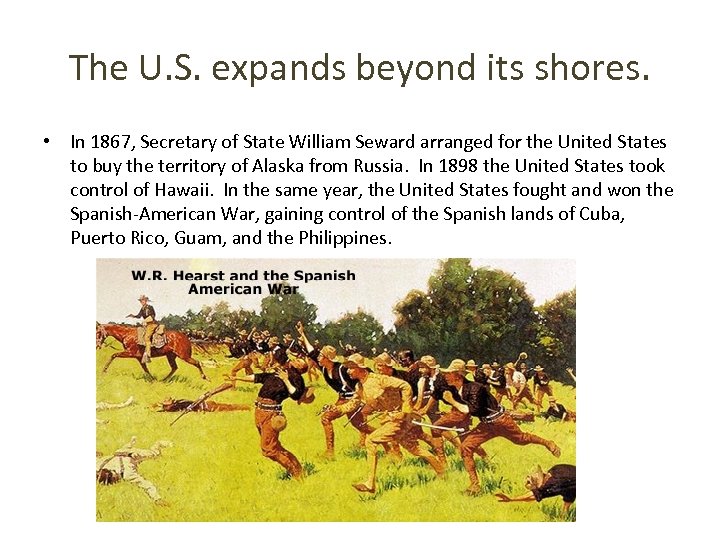 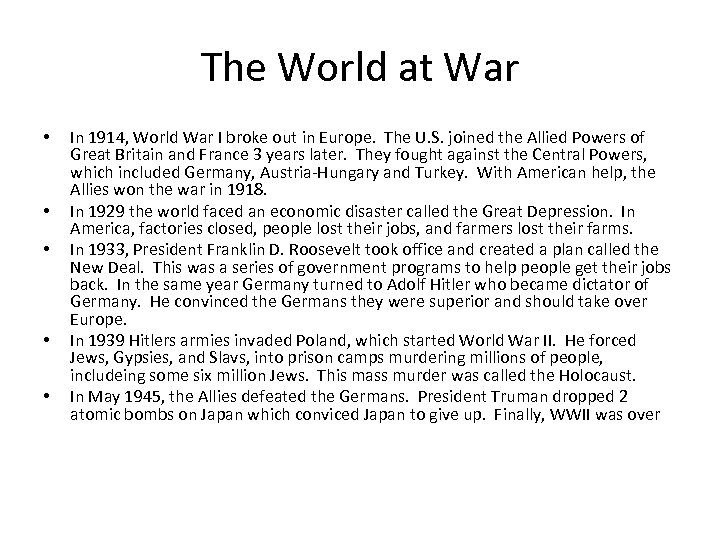 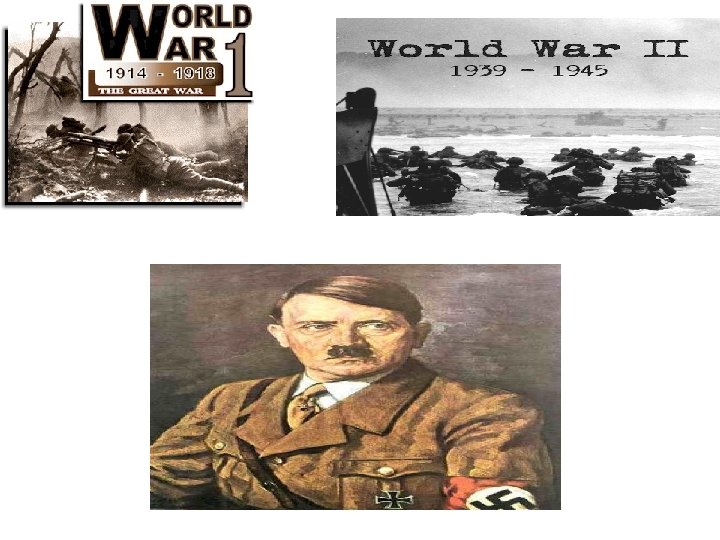 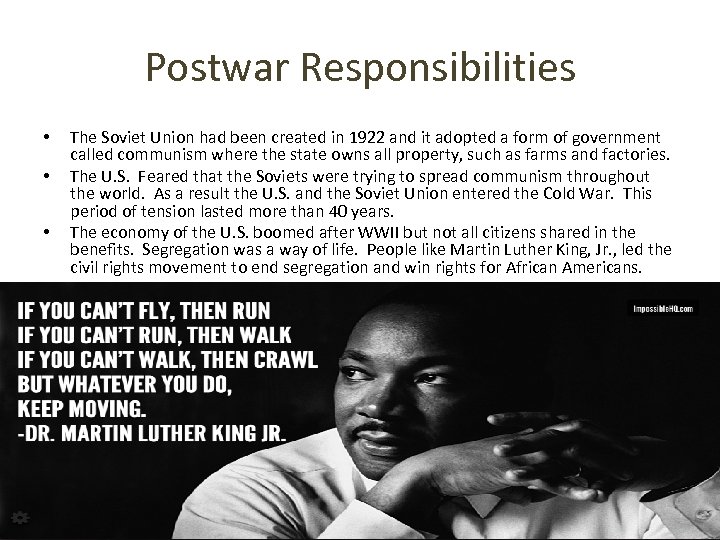 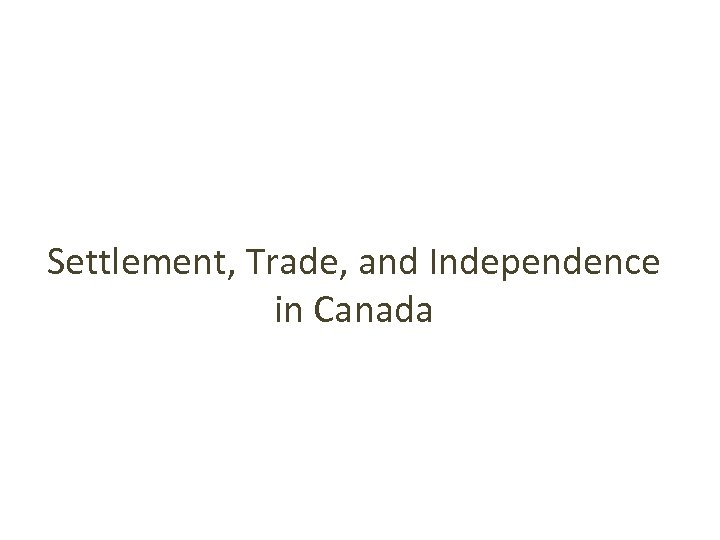 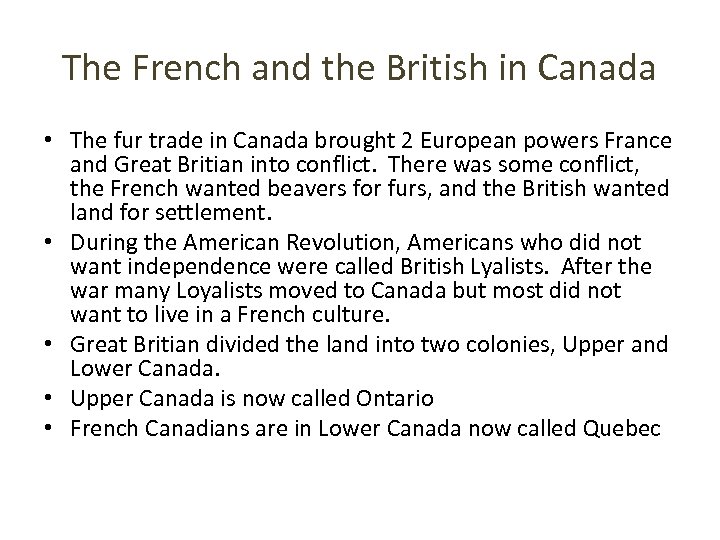 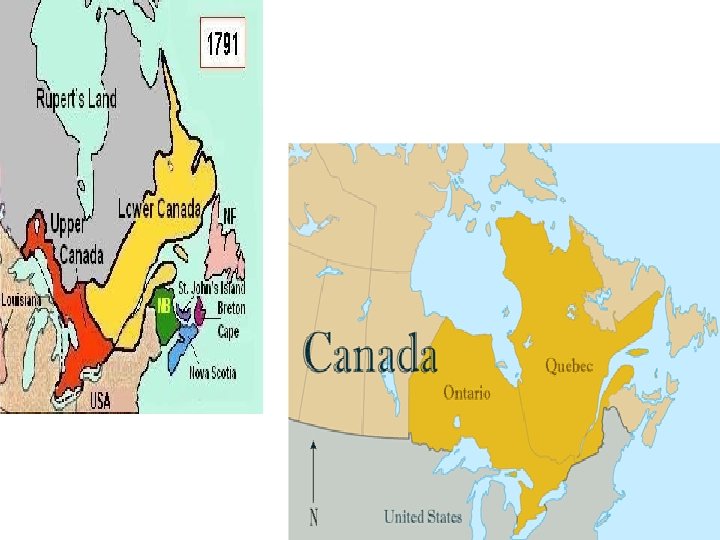 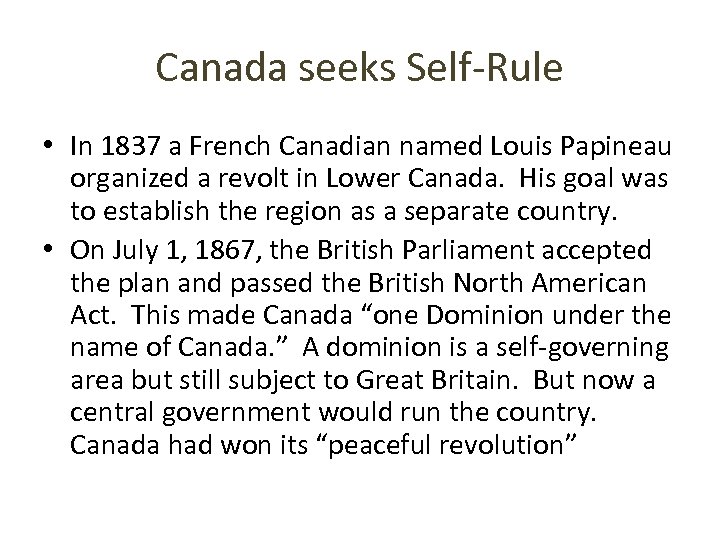 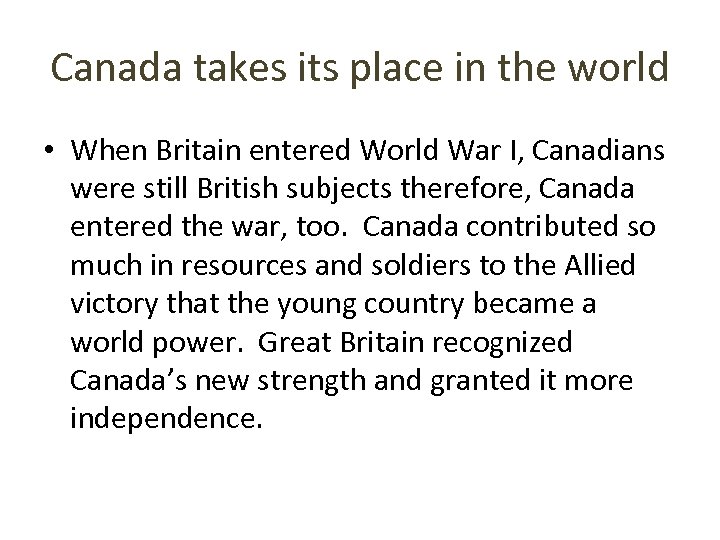 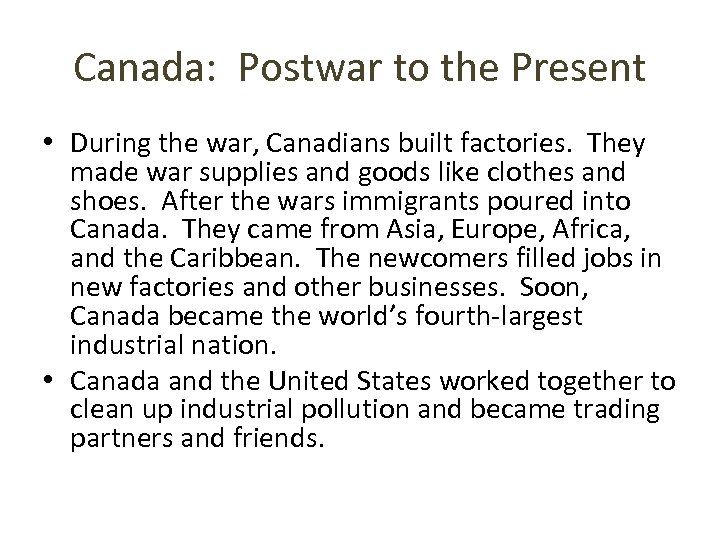 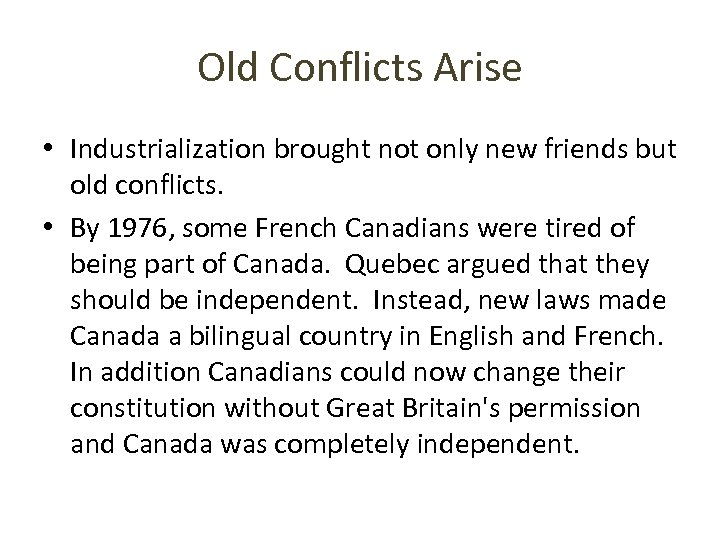 Скачать презентацию The Emergence of a World Power The

The Emergence of a World Power

The U. S. from 1865 to 1914 • Cities were starting to get crowded with poor immigrants, many of whom could not speak English. These newcomers were a huge labor force, or supply of workers. • In Chicago, Jane Addams set up a settlement house, or community center, for poor immigrants. • When the United States government passed the Homestead Act in 1862, it gave 160 acres of land to any adult willing to farm it and live on it for 5 years. • D • D • D

The World at War • • • In 1914, World War I broke out in Europe. The U. S. joined the Allied Powers of Great Britain and France 3 years later. They fought against the Central Powers, which included Germany, Austria-Hungary and Turkey. With American help, the Allies won the war in 1918. In 1929 the world faced an economic disaster called the Great Depression. In America, factories closed, people lost their jobs, and farmers lost their farms. In 1933, President Franklin D. Roosevelt took office and created a plan called the New Deal. This was a series of government programs to help people get their jobs back. In the same year Germany turned to Adolf Hitler who became dictator of Germany. He convinced the Germans they were superior and should take over Europe. In 1939 Hitlers armies invaded Poland, which started World War II. He forced Jews, Gypsies, and Slavs, into prison camps murdering millions of people, includeing some six million Jews. This mass murder was called the Holocaust. In May 1945, the Allies defeated the Germans. President Truman dropped 2 atomic bombs on Japan which conviced Japan to give up. Finally, WWII was over

Postwar Responsibilities • • • The Soviet Union had been created in 1922 and it adopted a form of government called communism where the state owns all property, such as farms and factories. The U. S. Feared that the Soviets were trying to spread communism throughout the world. As a result the U. S. and the Soviet Union entered the Cold War. This period of tension lasted more than 40 years. The economy of the U. S. boomed after WWII but not all citizens shared in the benefits. Segregation was a way of life. People like Martin Luther King, Jr. , led the civil rights movement to end segregation and win rights for African Americans. Dd D D D D d

Settlement, Trade, and Independence in Canada

The French and the British in Canada • The fur trade in Canada brought 2 European powers France and Great Britian into conflict. There was some conflict, the French wanted beavers for furs, and the British wanted land for settlement. • During the American Revolution, Americans who did not want independence were called British Lyalists. After the war many Loyalists moved to Canada but most did not want to live in a French culture. • Great Britian divided the land into two colonies, Upper and Lower Canada. • Upper Canada is now called Ontario • French Canadians are in Lower Canada now called Quebec

Canada seeks Self-Rule • In 1837 a French Canadian named Louis Papineau organized a revolt in Lower Canada. His goal was to establish the region as a separate country. • On July 1, 1867, the British Parliament accepted the plan and passed the British North American Act. This made Canada “one Dominion under the name of Canada. ” A dominion is a self-governing area but still subject to Great Britain. But now a central government would run the country. Canada had won its “peaceful revolution”

Canada takes its place in the world • When Britain entered World War I, Canadians were still British subjects therefore, Canada entered the war, too. Canada contributed so much in resources and soldiers to the Allied victory that the young country became a world power. Great Britain recognized Canada’s new strength and granted it more independence.

Canada: Postwar to the Present • During the war, Canadians built factories. They made war supplies and goods like clothes and shoes. After the wars immigrants poured into Canada. They came from Asia, Europe, Africa, and the Caribbean. The newcomers filled jobs in new factories and other businesses. Soon, Canada became the world’s fourth-largest industrial nation. • Canada and the United States worked together to clean up industrial pollution and became trading partners and friends.

Old Conflicts Arise • Industrialization brought not only new friends but old conflicts. • By 1976, some French Canadians were tired of being part of Canada. Quebec argued that they should be independent. Instead, new laws made Canada a bilingual country in English and French. In addition Canadians could now change their constitution without Great Britain's permission and Canada was completely independent.

Questions What is power? The variety of