The Early Church The Era of the 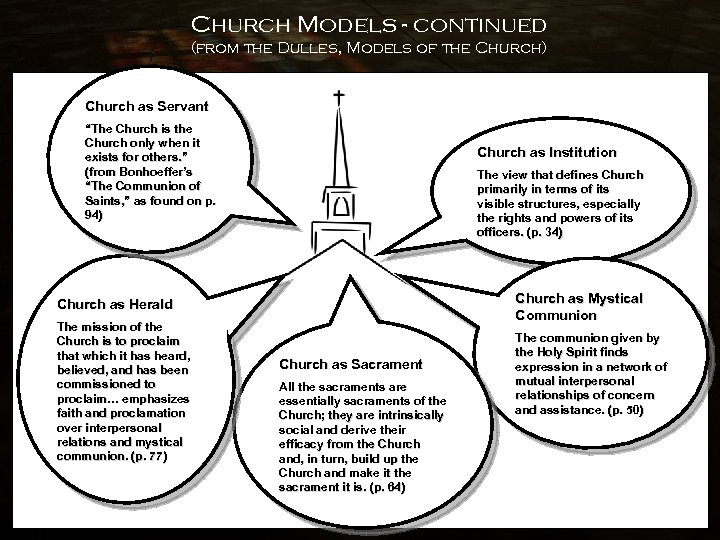 Скачать презентацию The Early Church The Era of the

Chronology of the Early Church – part 1 The execution of Jesus. His friends perceive, especially when they gather for the “Lord’s Supper, ” that Jesus continues to live in transcendent glory. A first “assembly” (ekklesia) gathers in Jerusalem to worship in the Temple, celebrate the Lord’s Supper, and rejoice in the Spirit. There is occasional conflict between this church and the Temple hierarchy. 30 The Jesus-preachers spread through the Jewish Diaspora. They establish a church community as far away as Rome by the early 40 s. They are amazed when their words about Jesus are most warmly received by the Gentile God-fearers who frequent Diaspora synagogues. Some Church members oppose admitting Gentiles – controversy escalates as the decade unfolds. Probable writing of synoptic sayings Caesar Caligula orders a statue of himself to be source (“Q”) placed in the Holy of Holies in the Jerusalem Temple. somewhere in Judea Mass protests and peasant strikes occur among or Galilee. Jews. Caligula is murdered by a rival before his order can be implemented. 40 50 Paul of Tarsus, who had been harassing Jesuspreachers in synagogues in Syria and Cilicia, has Paul and Barnabas, as apostles an experience of the Raised Lord which transforms from Antioch, establish churches in him into a supporter of the Church. Asia Minor. They follow the Hellenistic Jews become introduced to the Antiochaen practice of baptizing Jerusalem church. A dispute erupts when uncircumcised Gentiles. they feel slighted by the lack of preaching to Perhaps first in Antioch, some The “Council of Jerusalem” occurs them at the Lord’s Supper. The argument is Gentiles are spontaneously at which Peter, James, Paul and resolved by the appointment of Hellenistic baptized without being circumcised. others are present. It is decided to preachers for them. Hellenistic-Jewish “officially” sanction the admission church members begin to announce the of uncircumcised Gentiles (Gal. Good News in Judea, Samaria, Galilee, and 2: 1 -10; Acts 15: 1 – 18) adjacent regions, establishing an important church in Antioch of Syria.

Chronology of the Early Church – part 2 Peter visits Antioch, but withdraws from table fellowship with baptized Gentiles when baptized Jews (from James? ) complain about the presence of non-kosher food. Paul accuses Peter of betraying the Gospel and storms off, leaving his former partner Barnabas behind (Gal 2 -11 – 14). Paul’s great missionary journeys occur. The churches he establishes include Corinth, Ephesus, Thessalonica, and Colossae. His views on dietary issues may change after his experiences in Corinth. He finally sets out for Jerusalem with a collection and embassies from his Gentile churches. He plans to go from there to Rome in order to mount a missionary journey to Spain. 50 A letter from James in Jerusalem resolves the dietary dispute: Gentiles in Christ must observe minimal kosher and ethical standards (Acts 15: 22 ff; cf. 21: 25) The first Great Revolt of Jews against Rome breaks out. Rome ruthlessly suppresses it. Jerusalem and the Temple are destroyed in 70. The Jerusalem church may have previously fled across the Jordan to Pella. In Antioch, the term “Christian” is coined as a word of derision. 60 70 Caesar Nero begins a persecution of churchmembers in Rome. Paul and Peter are probably executed during this oppression. Meanwhile James is executed in Jerusalem in the mounting violence and confusion occurring there. Writing of the final form of the Gospel of Mark, maybe based on a Galilean original and a Roman redaction. The editorial comment in Mk 7: 19 that Jesus “declared all foods clean” displays the continued Gentile-Jewish tension.

Chronology of the Early Church – part 3 The Gospel of Mark is written in Galilee or Syria. In contrast to mark, it reflects a church community that prefers Gentiles to follow the Torah (see Mt: 5: 17 -19; 22: 11 -14). Matthew believes that his assembly represents authentic Judaism. A persecution of churches in Asia Minor by Caesar Domitian occurs. The Book of Revelation is written in this context. In various towns, especially in the Diaspora, local synagogues and churches dispute who is more faithful to the heritage of Israel. 80 The writing of the Gospel of Luke/Acts of the Apostles. This work wants baptized Gentiles to observe minimal Torah standards in order to preserve unity with baptized Jews. 100 Caesar Hadrian visits ruined Jerusalem and rebuilds it as an unwalled Roman shrine to Jupiter, Juno, and Minerva named “Aelia Capitolina. ” The Church holds a low social status in the opinion of most citizens. Very slowly, organized authority structures emerge, partially in answer to doctrinal controversies that are now beginning to prevail in Christianity. Still, Christian church communities can be found throughout the Empire by the end of the second century. 135 Second Revolt (Bar Kochba Revolt), primarily in Judea. With defeat, many Judean Jews relocate to Galilee. The Gospel of John (ca. 95) reaches its final form in a church community whose Jewish members have recently been ostracized by the local Jewish community.

Structure of the Early Church (from the Bausch, Chapter 3) † From the beginning… 1. Jesus Directly appointed his 2. Twelve Apostles Including Peter who was 3. The Pope Peter and the other eleven apostles personally ordained their successors, namely, 4. The Bishops Who ordained as their successors the 5. Other Bishops And so on until the present time. Thus is seen a series of links in the continuous chain of 6. Apostolic Succession

Structure of the Early Church - Continued (from the Bausch, Chapter 3) 1. Jesus Gathered the unique 2. Twelve Apostles As the foundation of his community of disciples. These twelve appointed to service 3. The Deacons And also what we might call 4. The “Secondary Apostles” Who were mainly itinerant preachers who founded church communities and then moved on. They left the ruling of such place to 5. The Presbyterate Which was a committee appointed by the churchcommunity. From the Presbyterate there emerged the 6. Single Monarchial Bishop Who, with all other bishops formed a “college. ” The visible image of the total or universal church and hallmark of episcopal unity was the one who held 7. The Petrine Office Which evolved from Peter’s leadership. In addition there were 8. Other Ministries For example, healers, teachers, etc.

Church Models (from the Brown, The Churches the Apostles Left Behind) “The deaths of the early church leaders and the deaths of those who knew them caused a crisis of leadership towards the end of the first century. In the Christian scriptures we can find at least seven responses to this crisis of leadership. ” (Bausch, p. 44) 1. Pastoral Letters: Church Led by Authoritative Teachers 6. Matthew: The Church Living by the Torah of Jesus 2. Col/Ephesians: Church as the Mystical Body of Christ to be Loved 5. Johannine Writings: A Discipleship of Equals Guided by the Paraclete 4. 1 Peter: The Church as the People of God 3. Luke-Acts: The Church as the Agent of the Spirit

Church Models - continued (from the Dulles, Models of the Church) Church as Servant “The Church is the Church only when it exists for others. ” (from Bonhoeffer’s “The Communion of Saints, ” as found on p. 94) Church as Institution The view that defines Church primarily in terms of its visible structures, especially the rights and powers of its officers. (p. 34) Church as Mystical Communion Church as Herald The mission of the Church is to proclaim that which it has heard, believed, and has been commissioned to proclaim… emphasizes faith and proclamation over interpersonal relations and mystical communion. (p. 77) Church as Sacrament All the sacraments are essentially sacraments of the Church; they are intrinsically social and derive their efficacy from the Church and, in turn, build up the Church and make it the sacrament it is. (p. 64) The communion given by the Holy Spirit finds expression in a network of mutual interpersonal relationships of concern and assistance. (p. 50)

Church Models - Evaluation (from the Dulles, Models of the Church) “…we have been engaged in what Bernard Lonergan might call dialectic as distinct from doctrinal theology. We have been exploring the basic models of the Church that have arisen in history as a result of the differing points of view or horizons of believers and theologians of different ages and cultures… Are all of the models equally good, or are some superior to others? Are they an opaque screen that shuts off the reality of the Church, or a transparent screen that permits us to grasp the Church as it really is? If the latter, what really is the Church? What is the best model? ” (Dulles, p. 190) How do we evaluate models? Basis in Scripture Basis in Christian Tradition Offers Identity & Mission Fosters Christian values Relevant to current Christianity Internal Fruitfulness External Fruitfulness

Expansion and Its Problems (from the Bausch, Chapter 2) † First crisis - Jewish Christians attempting to require Gentile converts to become fully Jewish in order to be Christian † Second crisis - reaction of Roman government to the rapid growth of Christianity