The Dialogical Self State of the Art Hubert 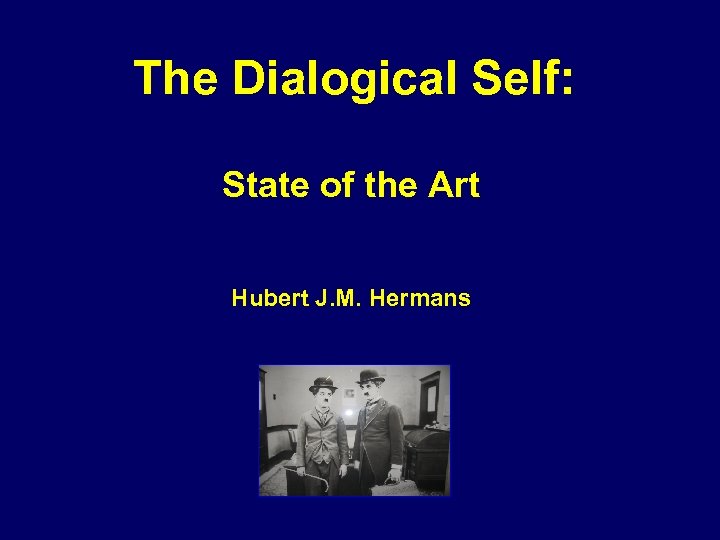 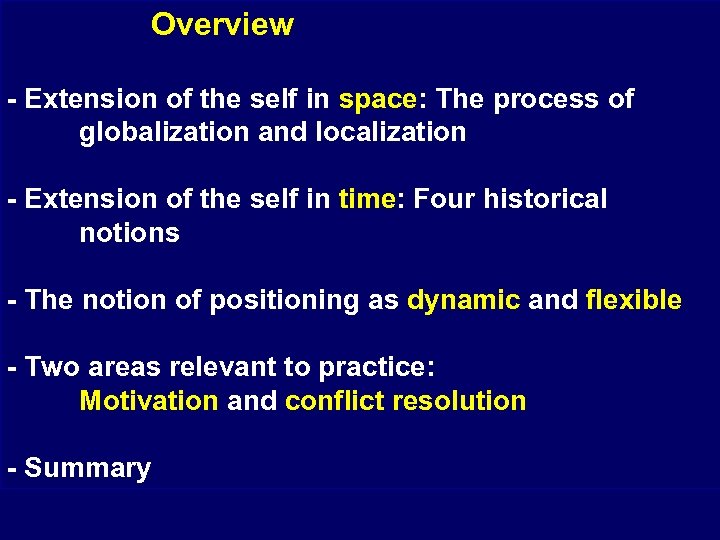 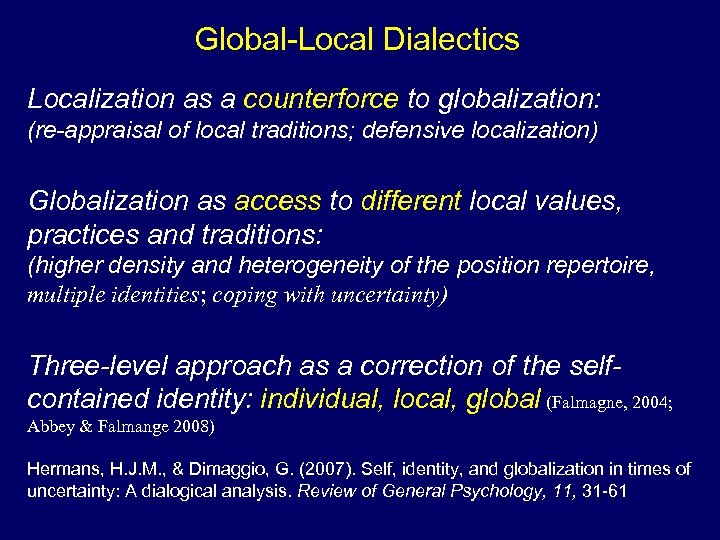 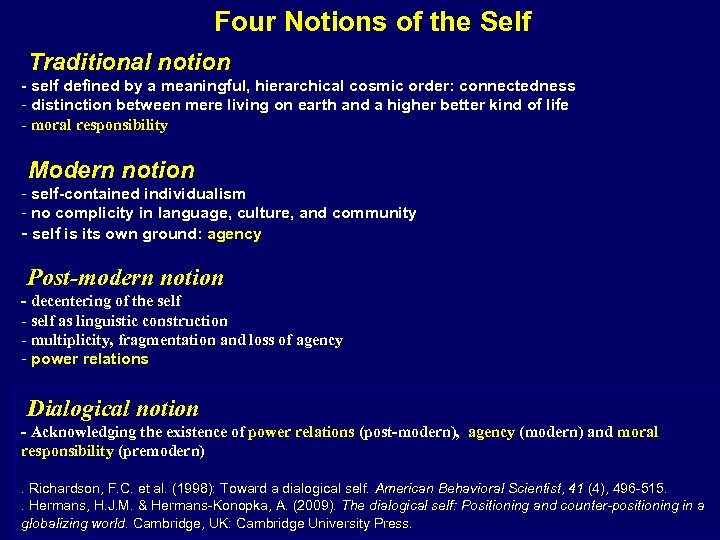 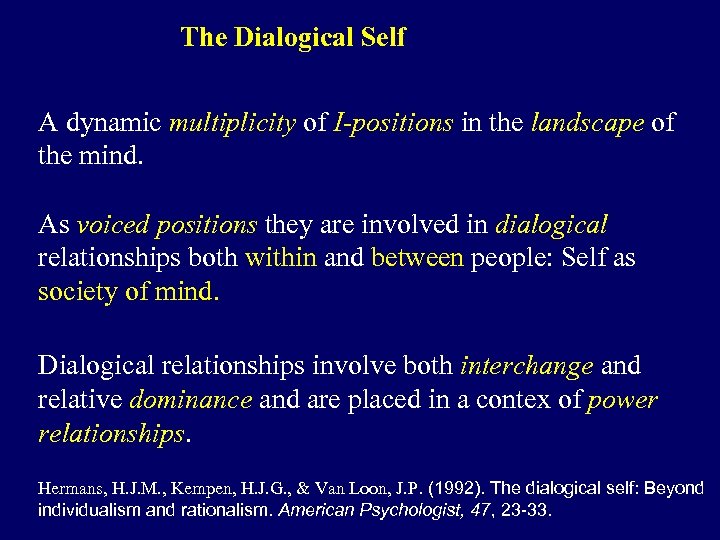 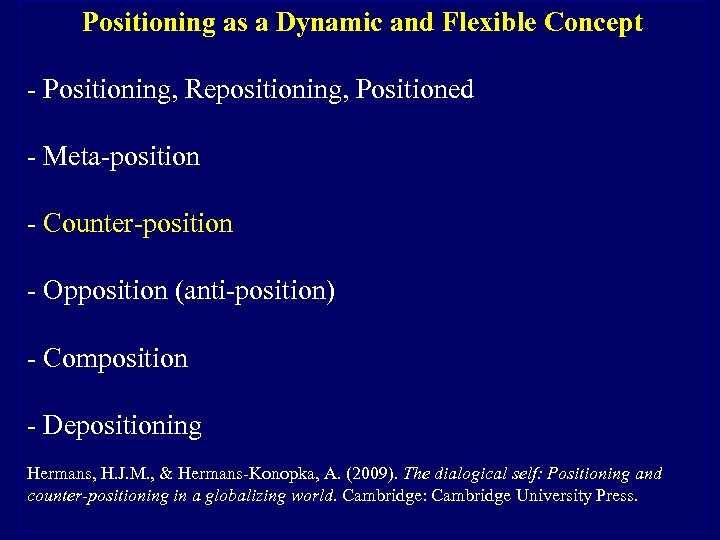 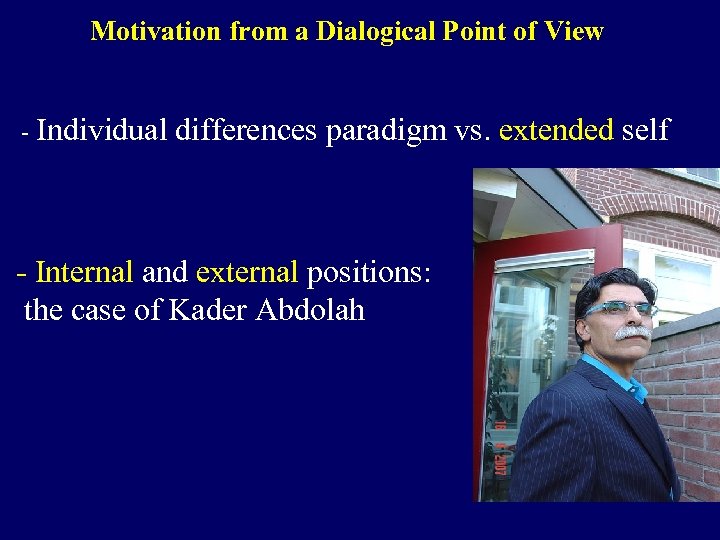 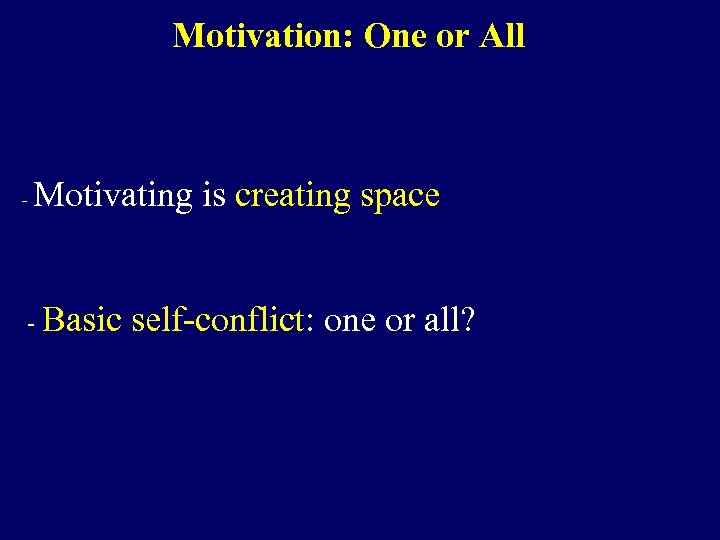 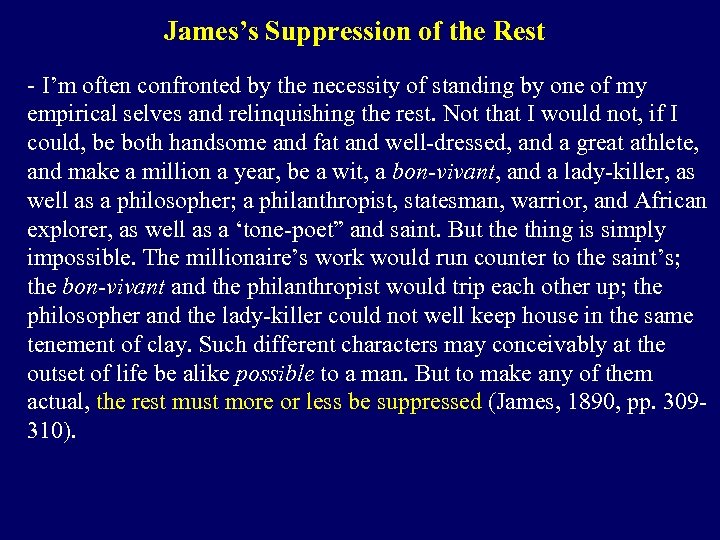 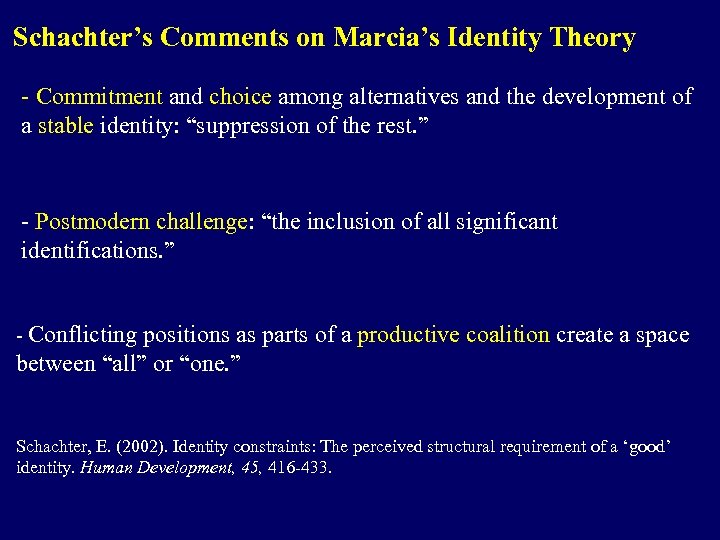 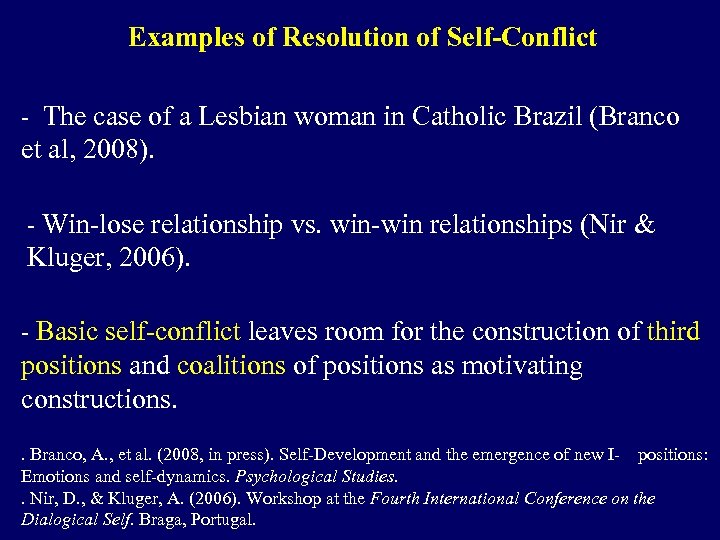 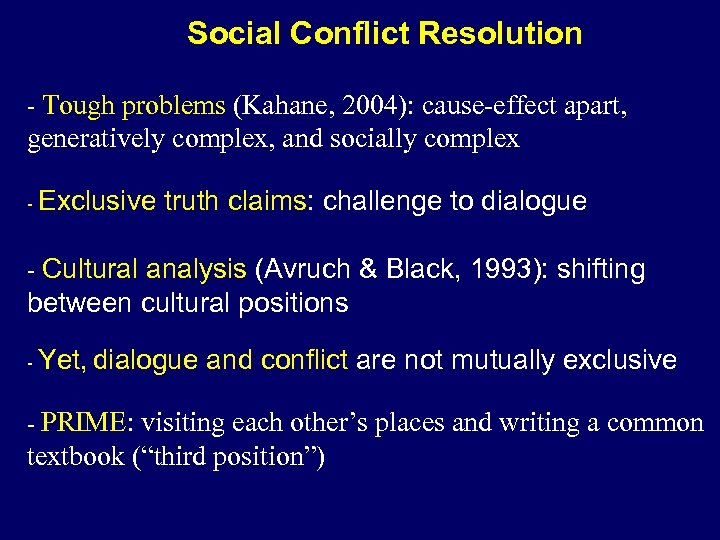 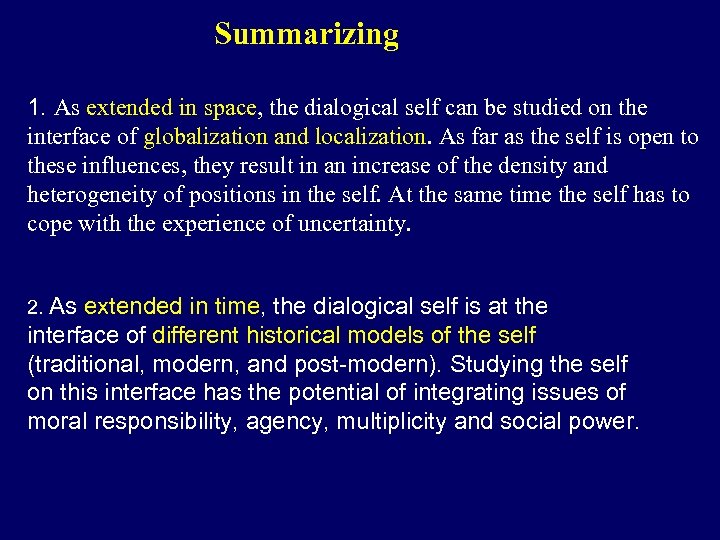 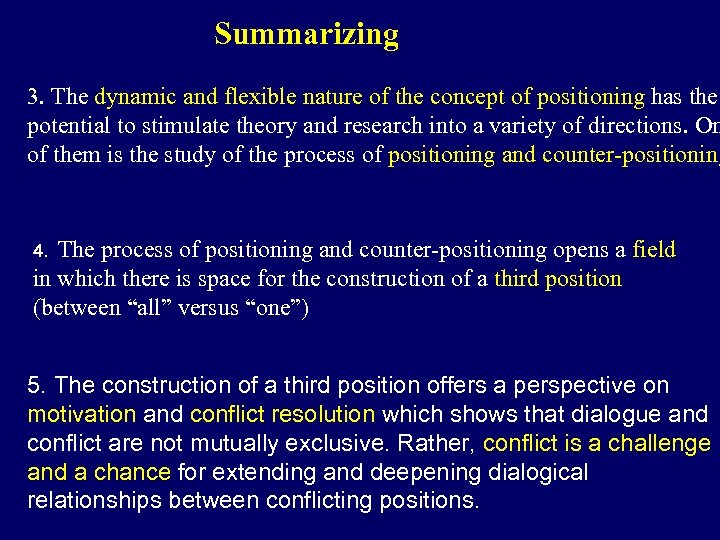 Скачать презентацию The Dialogical Self State of the Art Hubert

The Dialogical Self: State of the Art Hubert J. M. Hermans

Four Notions of the Self Traditional notion - self defined by a meaningful, hierarchical cosmic order: connectedness - distinction between mere living on earth and a higher better kind of life - moral responsibility Modern notion - self-contained individualism - no complicity in language, culture, and community - self is its own ground: agency Post-modern notion - decentering of the self - self as linguistic construction - multiplicity, fragmentation and loss of agency - power relations Dialogical notion - Acknowledging the existence of power relations (post-modern), agency (modern) and moral responsibility (premodern). Richardson, F. C. et al. (1998): Toward a dialogical self. American Behavioral Scientist, 41 (4), 496 -515. . Hermans, H. J. M. & Hermans-Konopka, A. (2009). The dialogical self: Positioning and counter-positioning in a globalizing world. Cambridge, UK: Cambridge University Press.

The Dialogical Self A dynamic multiplicity of I-positions in the landscape of the mind. As voiced positions they are involved in dialogical relationships both within and between people: Self as society of mind. Dialogical relationships involve both interchange and relative dominance and are placed in a contex of power relationships. Hermans, H. J. M. , Kempen, H. J. G. , & Van Loon, J. P. (1992). The dialogical self: Beyond individualism and rationalism. American Psychologist, 47, 23 -33.

Motivation from a Dialogical Point of View - Individual differences paradigm vs. extended self - Internal and external positions: the case of Kader Abdolah

Motivation: One or All - Motivating is creating space - Basic self-conflict: one or all?

James’s Suppression of the Rest - I’m often confronted by the necessity of standing by one of my empirical selves and relinquishing the rest. Not that I would not, if I could, be both handsome and fat and well-dressed, and a great athlete, and make a million a year, be a wit, a bon-vivant, and a lady-killer, as well as a philosopher; a philanthropist, statesman, warrior, and African explorer, as well as a ‘tone-poet” and saint. But the thing is simply impossible. The millionaire’s work would run counter to the saint’s; the bon-vivant and the philanthropist would trip each other up; the philosopher and the lady-killer could not well keep house in the same tenement of clay. Such different characters may conceivably at the outset of life be alike possible to a man. But to make any of them actual, the rest must more or less be suppressed (James, 1890, pp. 309310).

Schachter’s Comments on Marcia’s Identity Theory - Commitment and choice among alternatives and the development of a stable identity: “suppression of the rest. ” - Postmodern challenge: “the inclusion of all significant identifications. ” - Conflicting positions as parts of a productive coalition create a space between “all” or “one. ” Schachter, E. (2002). Identity constraints: The perceived structural requirement of a ‘good’ identity. Human Development, 45, 416 -433.

Examples of Resolution of Self-Conflict - The case of a Lesbian woman in Catholic Brazil (Branco et al, 2008). - Win-lose relationship vs. win-win relationships (Nir & Kluger, 2006). - Basic self-conflict leaves room for the construction of third positions and coalitions of positions as motivating constructions. . Branco, A. , et al. (2008, in press). Self-Development and the emergence of new I- positions: Emotions and self-dynamics. Psychological Studies. . Nir, D. , & Kluger, A. (2006). Workshop at the Fourth International Conference on the Dialogical Self. Braga, Portugal.

Summarizing 1. As extended in space, the dialogical self can be studied on the interface of globalization and localization. As far as the self is open to these influences, they result in an increase of the density and heterogeneity of positions in the self. At the same time the self has to cope with the experience of uncertainty. 2. As extended in time, the dialogical self is at the interface of different historical models of the self (traditional, modern, and post-modern). Studying the self on this interface has the potential of integrating issues of moral responsibility, agency, multiplicity and social power.

Summarizing 3. The dynamic and flexible nature of the concept of positioning has the potential to stimulate theory and research into a variety of directions. On of them is the study of the process of positioning and counter-positioning The process of positioning and counter-positioning opens a field in which there is space for the construction of a third position (between “all” versus “one”) 4. 5. The construction of a third position offers a perspective on motivation and conflict resolution which shows that dialogue and conflict are not mutually exclusive. Rather, conflict is a challenge and a chance for extending and deepening dialogical relationships between conflicting positions.