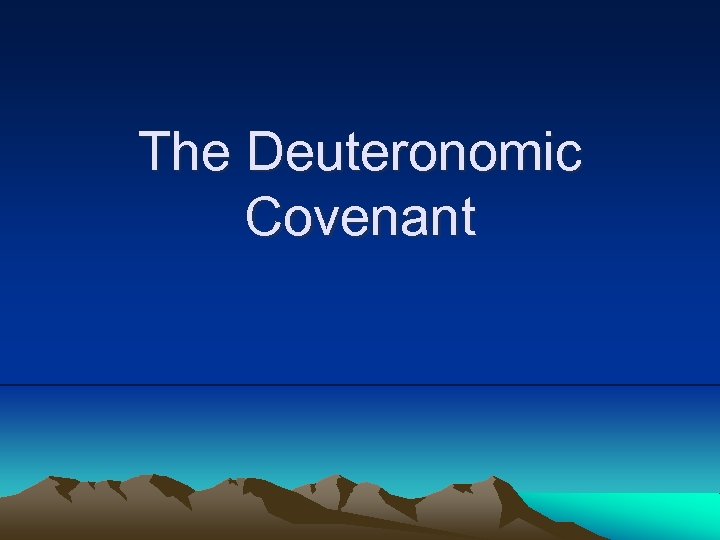 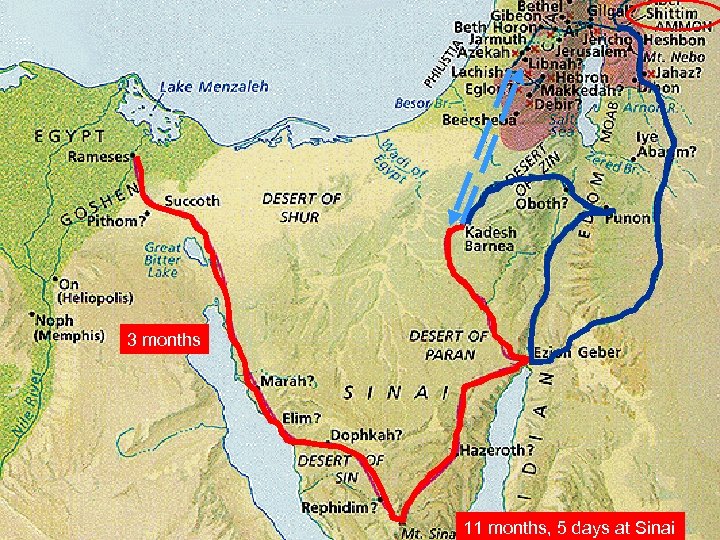 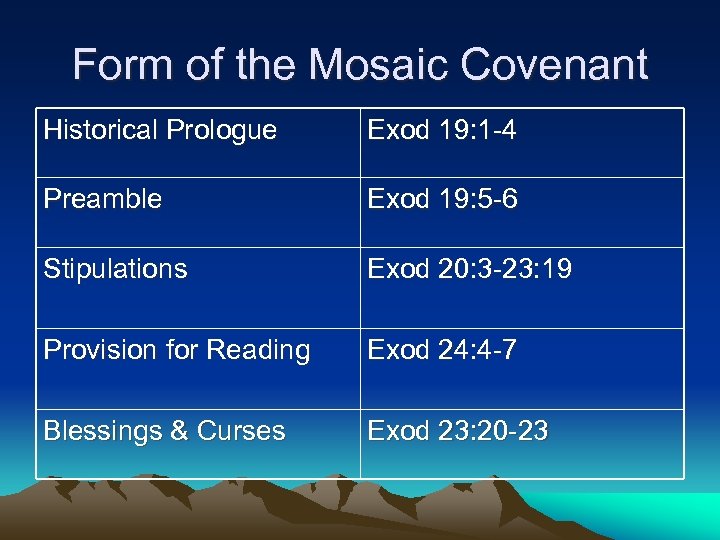 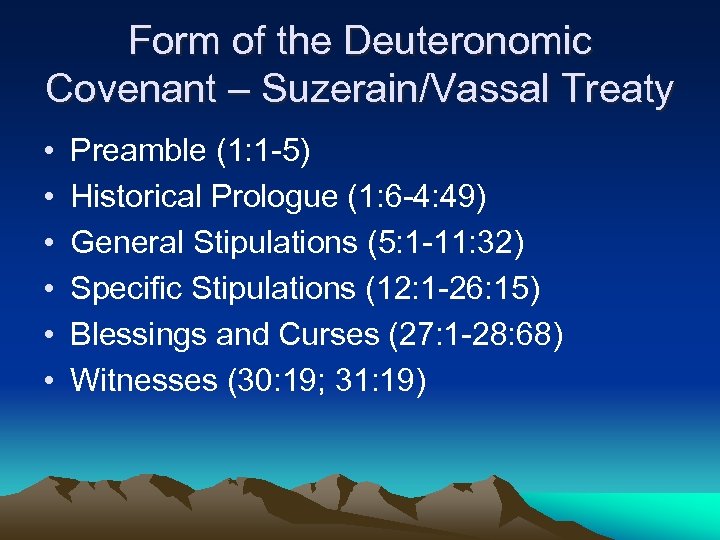 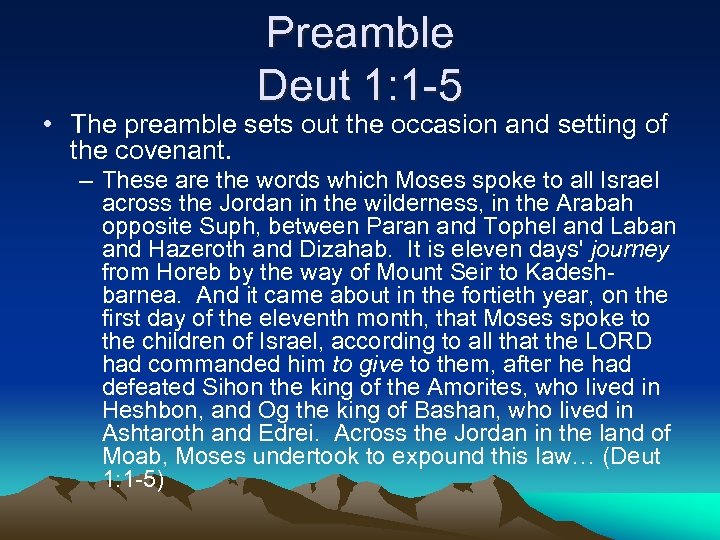 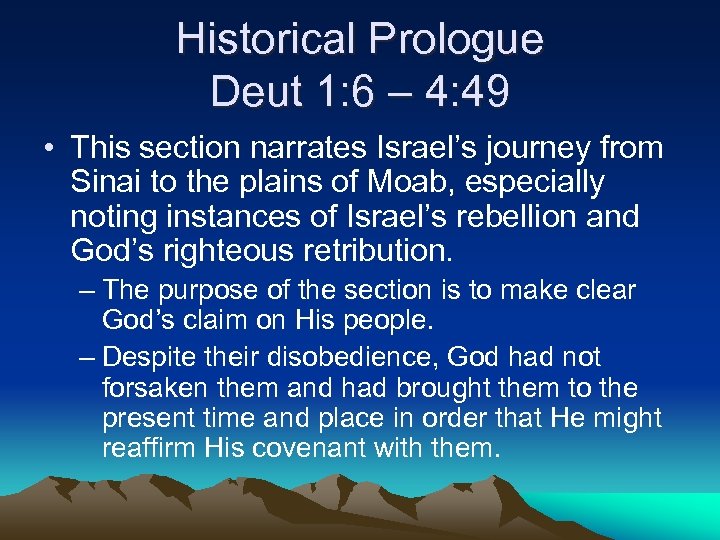 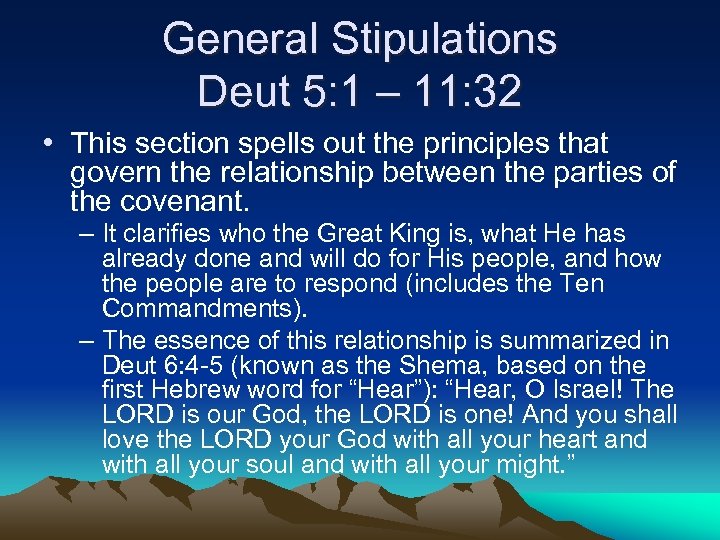 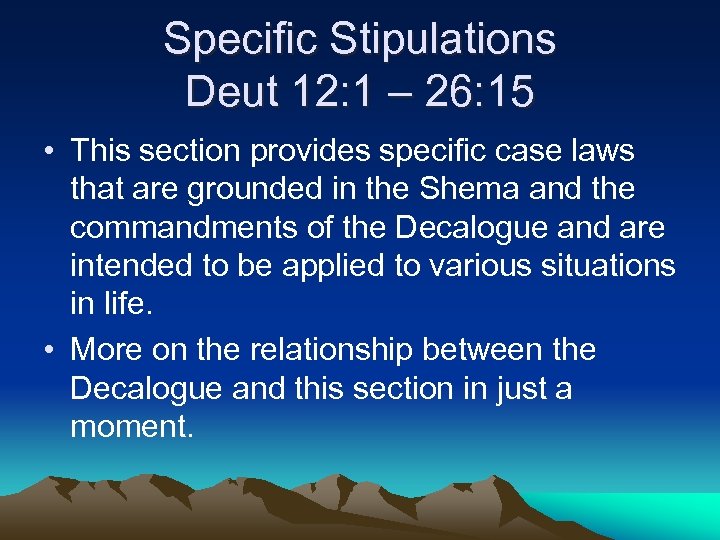 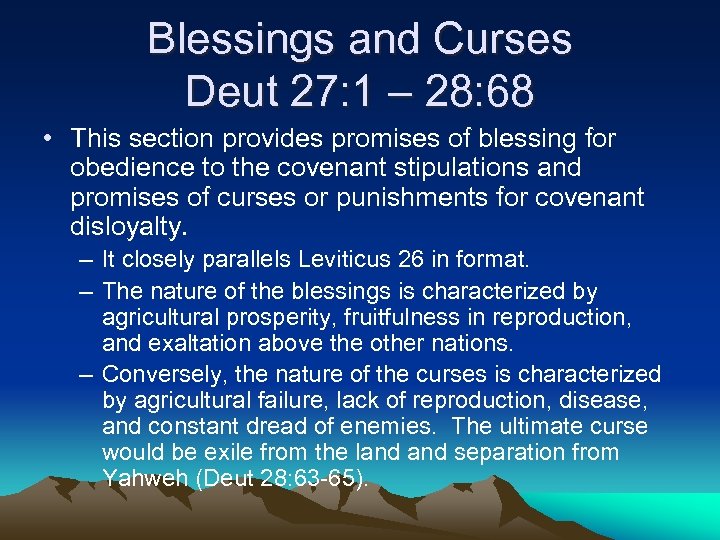 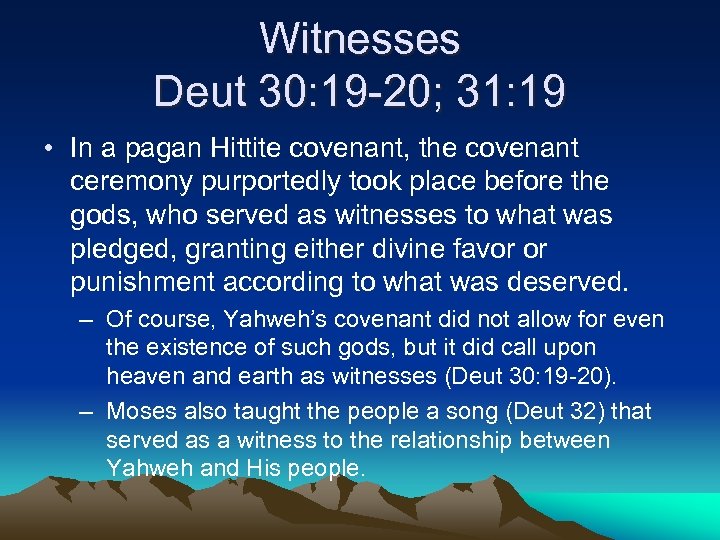 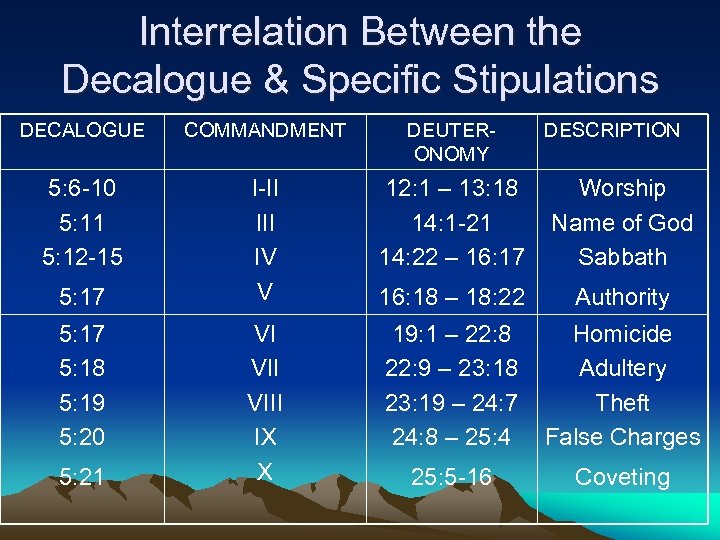 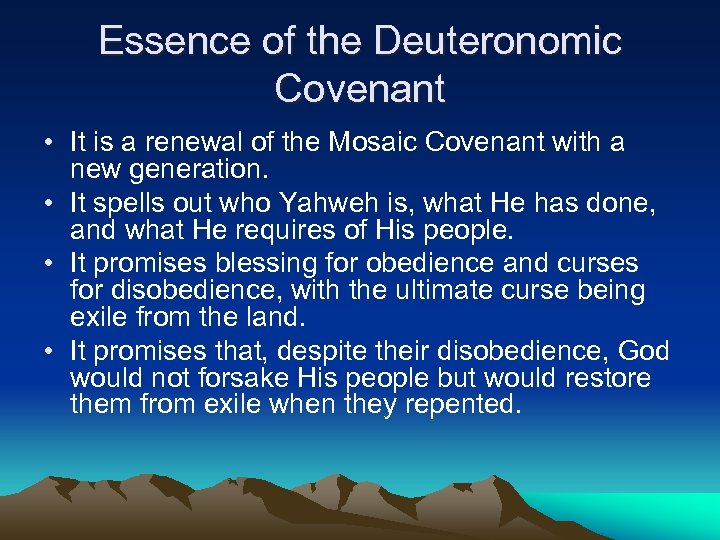 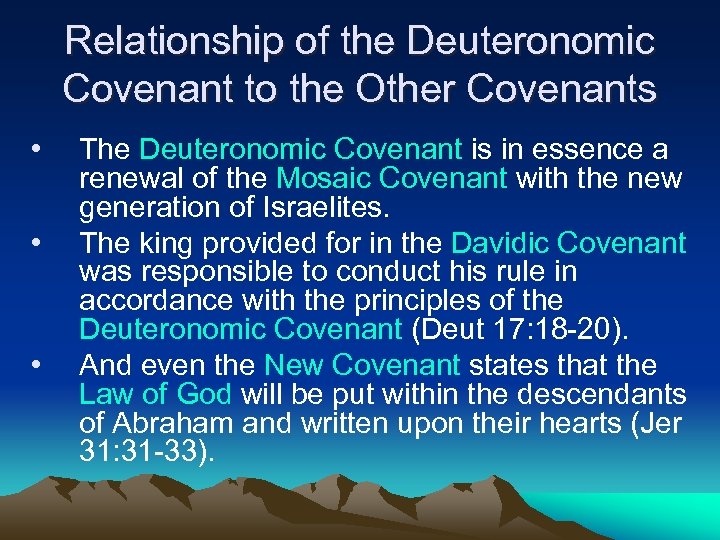 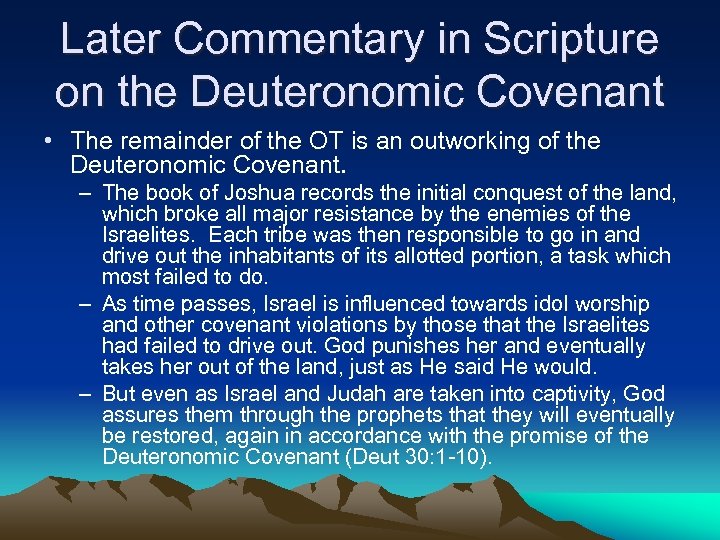 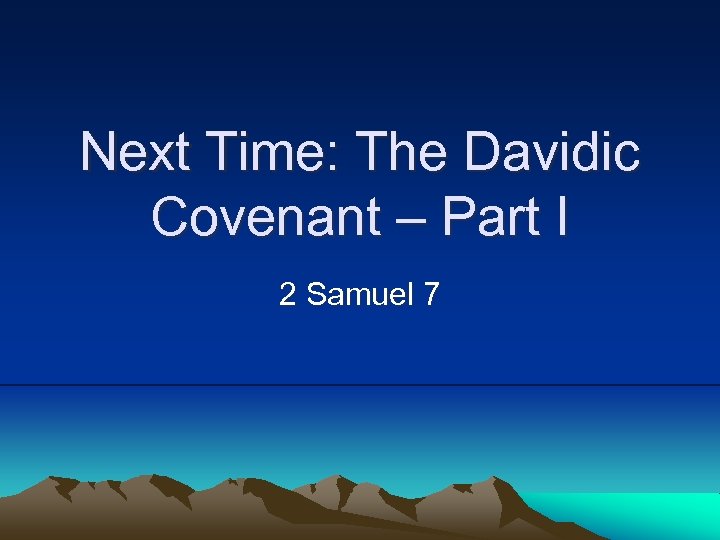 Preamble Deut 1: 1 -5 • The preamble sets out the occasion and setting of the covenant. – These are the words which Moses spoke to all Israel across the Jordan in the wilderness, in the Arabah opposite Suph, between Paran and Tophel and Laban and Hazeroth and Dizahab. It is eleven days' journey from Horeb by the way of Mount Seir to Kadeshbarnea. And it came about in the fortieth year, on the first day of the eleventh month, that Moses spoke to the children of Israel, according to all that the LORD had commanded him to give to them, after he had defeated Sihon the king of the Amorites, who lived in Heshbon, and Og the king of Bashan, who lived in Ashtaroth and Edrei. Across the Jordan in the land of Moab, Moses undertook to expound this law… (Deut 1: 1 -5)

Historical Prologue Deut 1: 6 – 4: 49 • This section narrates Israel’s journey from Sinai to the plains of Moab, especially noting instances of Israel’s rebellion and God’s righteous retribution. – The purpose of the section is to make clear God’s claim on His people. – Despite their disobedience, God had not forsaken them and had brought them to the present time and place in order that He might reaffirm His covenant with them.

General Stipulations Deut 5: 1 – 11: 32 • This section spells out the principles that govern the relationship between the parties of the covenant. – It clarifies who the Great King is, what He has already done and will do for His people, and how the people are to respond (includes the Ten Commandments). – The essence of this relationship is summarized in Deut 6: 4 -5 (known as the Shema, based on the first Hebrew word for “Hear”): “Hear, O Israel! The LORD is our God, the LORD is one! And you shall love the LORD your God with all your heart and with all your soul and with all your might. ”

Specific Stipulations Deut 12: 1 – 26: 15 • This section provides specific case laws that are grounded in the Shema and the commandments of the Decalogue and are intended to be applied to various situations in life. • More on the relationship between the Decalogue and this section in just a moment.

Blessings and Curses Deut 27: 1 – 28: 68 • This section provides promises of blessing for obedience to the covenant stipulations and promises of curses or punishments for covenant disloyalty. – It closely parallels Leviticus 26 in format. – The nature of the blessings is characterized by agricultural prosperity, fruitfulness in reproduction, and exaltation above the other nations. – Conversely, the nature of the curses is characterized by agricultural failure, lack of reproduction, disease, and constant dread of enemies. The ultimate curse would be exile from the land separation from Yahweh (Deut 28: 63 -65).

Witnesses Deut 30: 19 -20; 31: 19 • In a pagan Hittite covenant, the covenant ceremony purportedly took place before the gods, who served as witnesses to what was pledged, granting either divine favor or punishment according to what was deserved. – Of course, Yahweh’s covenant did not allow for even the existence of such gods, but it did call upon heaven and earth as witnesses (Deut 30: 19 -20). – Moses also taught the people a song (Deut 32) that served as a witness to the relationship between Yahweh and His people.

Essence of the Deuteronomic Covenant • It is a renewal of the Mosaic Covenant with a new generation. • It spells out who Yahweh is, what He has done, and what He requires of His people. • It promises blessing for obedience and curses for disobedience, with the ultimate curse being exile from the land. • It promises that, despite their disobedience, God would not forsake His people but would restore them from exile when they repented.

Later Commentary in Scripture on the Deuteronomic Covenant • The remainder of the OT is an outworking of the Deuteronomic Covenant. – The book of Joshua records the initial conquest of the land, which broke all major resistance by the enemies of the Israelites. Each tribe was then responsible to go in and drive out the inhabitants of its allotted portion, a task which most failed to do. – As time passes, Israel is influenced towards idol worship and other covenant violations by those that the Israelites had failed to drive out. God punishes her and eventually takes her out of the land, just as He said He would. – But even as Israel and Judah are taken into captivity, God assures them through the prophets that they will eventually be restored, again in accordance with the promise of the Deuteronomic Covenant (Deut 30: 1 -10).

Next Time: The Davidic Covenant – Part I 2 Samuel 7