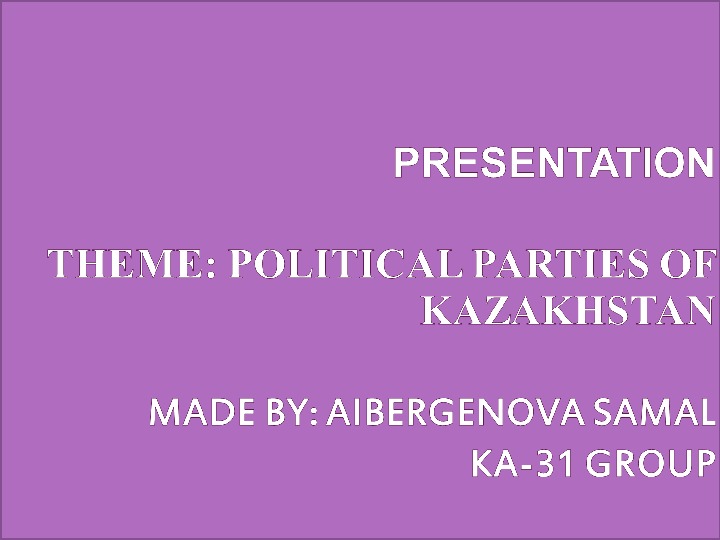 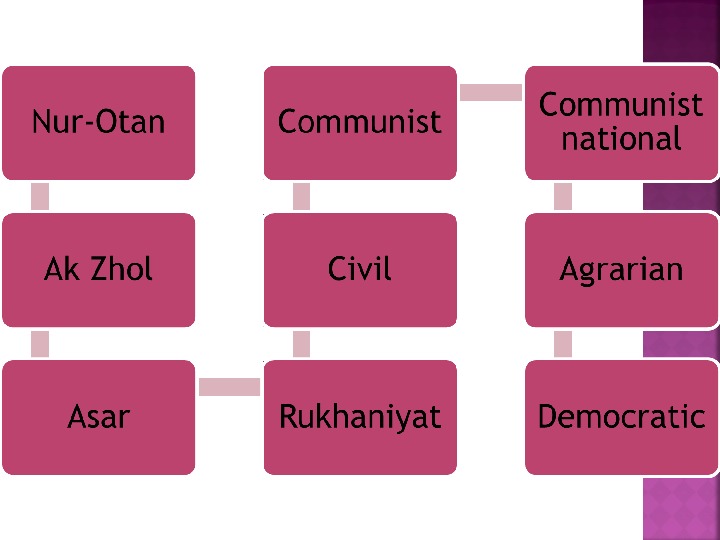 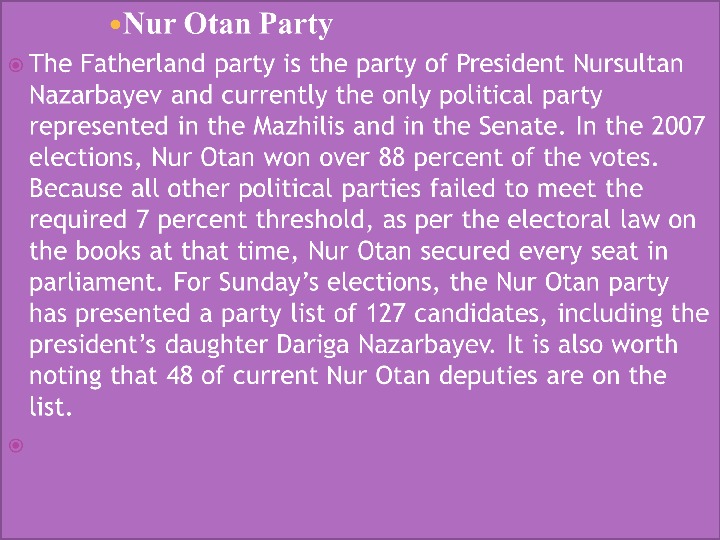 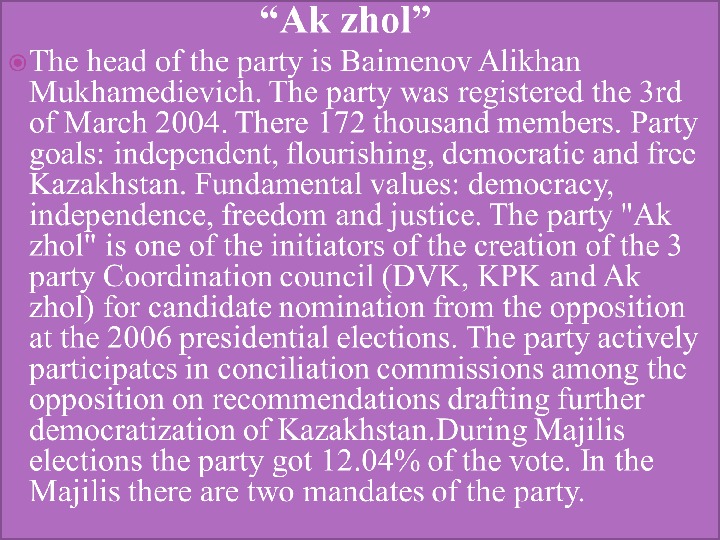 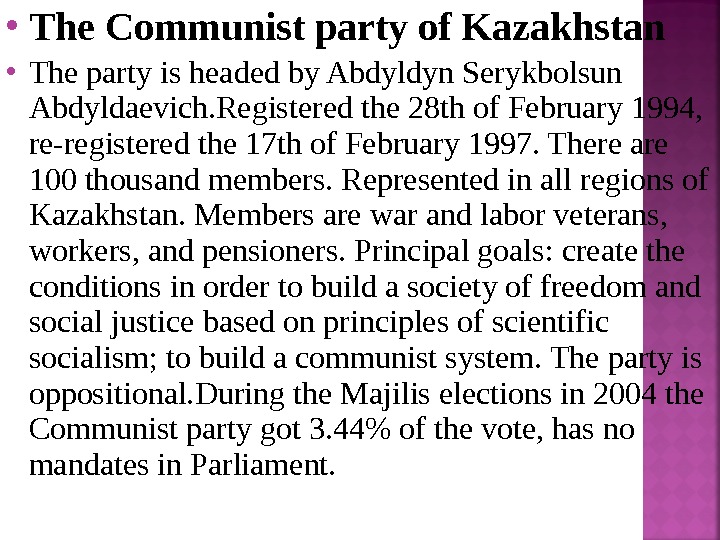 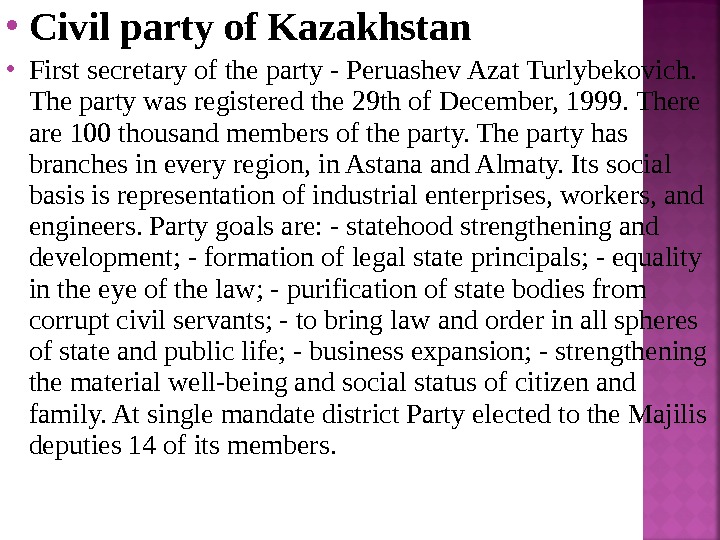 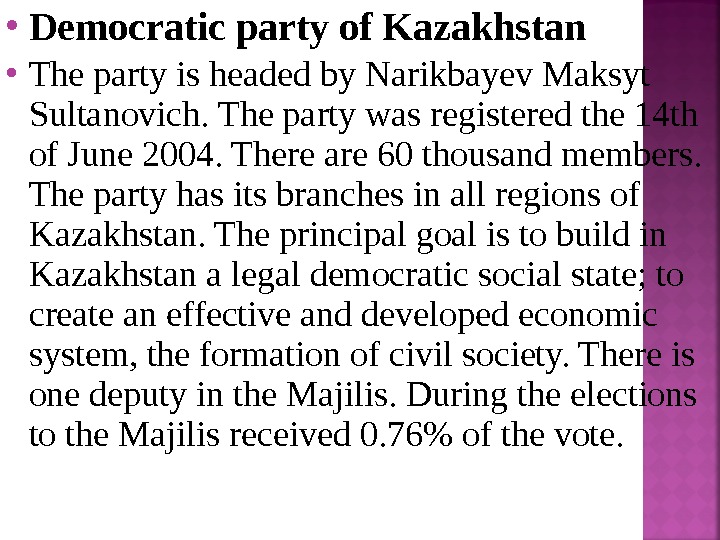 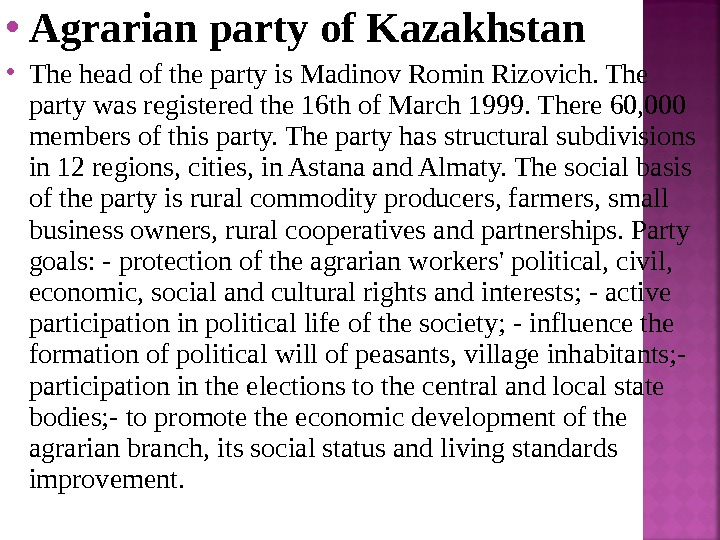 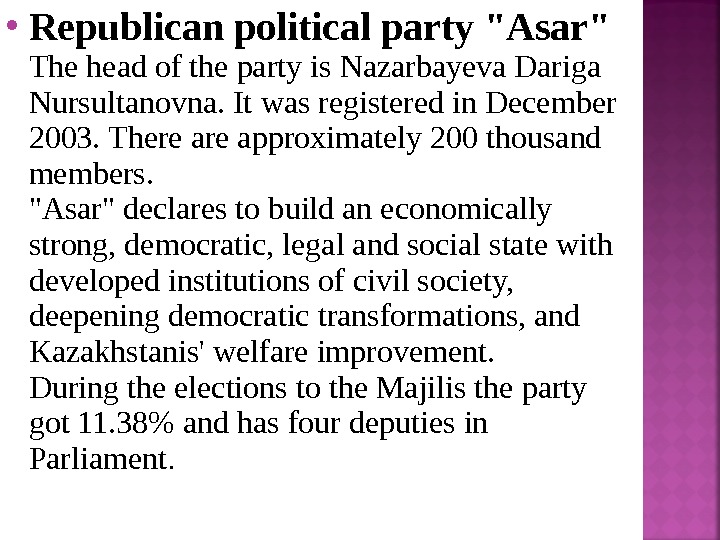 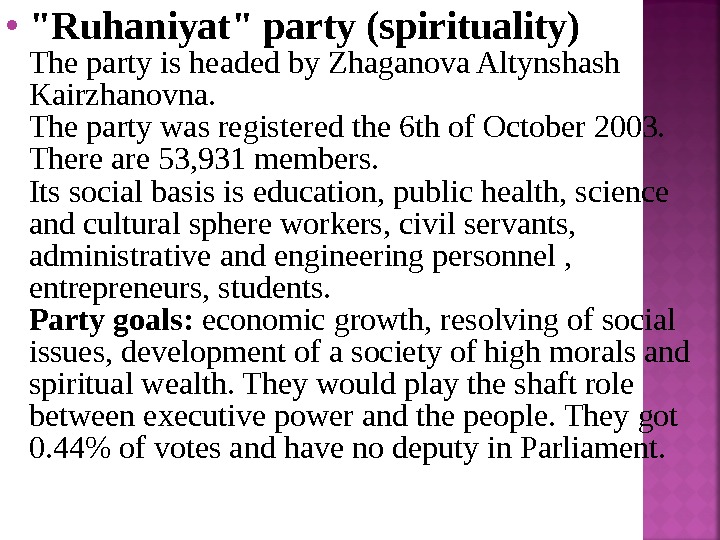 Скачать презентацию The Communist party of Kazakhstan The

Описание презентации The Communist party of Kazakhstan The по слайдам

The Communist party of Kazakhstan The party is headed by Abdyldyn Serykbolsun Abdyldaevich. Registered the 28 th of February 1994, re-registered the 17 th of February 1997. There are 100 thousand members. Represented in all regions of Kazakhstan. Members are war and labor veterans, workers, and pensioners. Principal goals: create the conditions in order to build a society of freedom and social justice based on principles of scientific socialism; to build a communist system. The party is oppositional. During the Majilis elections in 2004 the Communist party got 3. 44% of the vote, has no mandates in Parliament.

Civil party of Kazakhstan First secretary of the party — Peruashev Azat Turlybekovich. The party was registered the 29 th of December, 1999. There are 100 thousand members of the party. The party has branches in every region, in Astana and Almaty. Its social basis is representation of industrial enterprises, workers, and engineers. Party goals are: — statehood strengthening and development; — formation of legal state principals; — equality in the eye of the law; — purification of state bodies from corrupt civil servants; — to bring law and order in all spheres of state and public life; — business expansion; — strengthening the material well-being and social status of citizen and family. At single mandate district Party elected to the Majilis deputies 14 of its members.

Democratic party of Kazakhstan The party is headed by Narikbayev Maksyt Sultanovich. The party was registered the 14 th of June 2004. There are 60 thousand members. The party has its branches in all regions of Kazakhstan. The principal goal is to build in Kazakhstan a legal democratic social state; to create an effective and developed economic system, the formation of civil society. There is one deputy in the Majilis. During the elections to the Majilis received 0. 76% of the vote.

Agrarian party of Kazakhstan The head of the party is Madinov Romin Rizovich. The party was registered the 16 th of March 1999. There 60, 000 members of this party. The party has structural subdivisions in 12 regions, cities, in Astana and Almaty. The social basis of the party is rural commodity producers, farmers, small business owners, rural cooperatives and partnerships. Party goals: — protection of the agrarian workers’ political, civil, economic, social and cultural rights and interests; — active participation in political life of the society; — influence the formation of political will of peasants, village inhabitants; — participation in the elections to the central and local state bodies; — to promote the economic development of the agrarian branch, its social status and living standards improvement.

Republican political party «Asar» The head of the party is Nazarbayeva Dariga Nursultanovna. It was registered in December 2003. There approximately 200 thousand members. «Asar» declares to build an economically strong, democratic, legal and social state with developed institutions of civil society, deepening democratic transformations, and Kazakhstanis’ welfare improvement. During the elections to the Majilis the party got 11. 38% and has four deputies in Parliament.

«Ruhaniyat» party (spirituality) The party is headed by Zhaganova Altynshash Kairzhanovna. The party was registered the 6 th of October 2003. There are 53, 931 members. Its social basis is education, public health, science and cultural sphere workers, civil servants, administrative and engineering personnel , entrepreneurs, students. Party goals: economic growth, resolving of social issues, development of a society of high morals and spiritual wealth. They would play the shaft role between executive power and the people. They got 0. 44% of votes and have no deputy in Parliament.