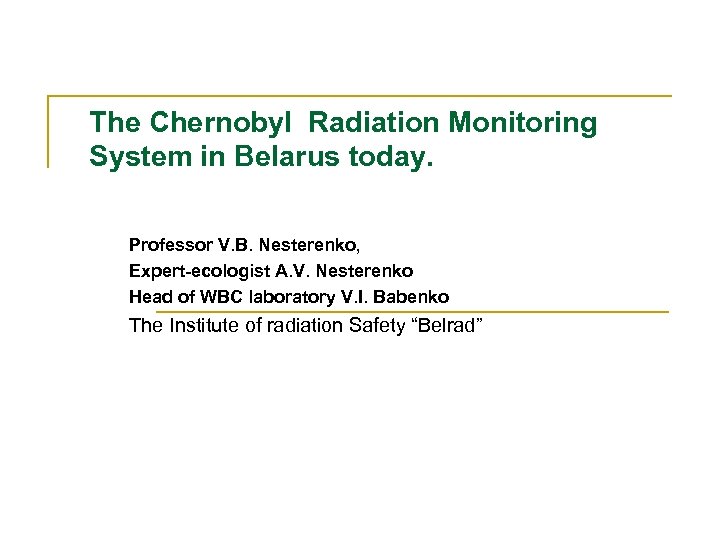 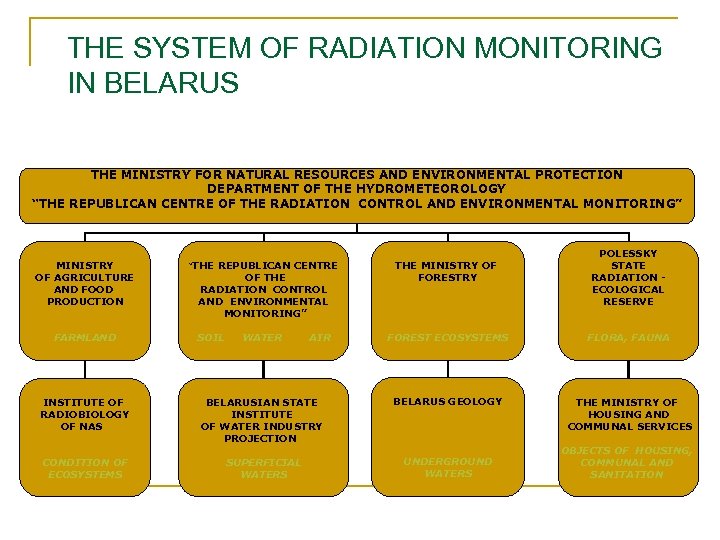 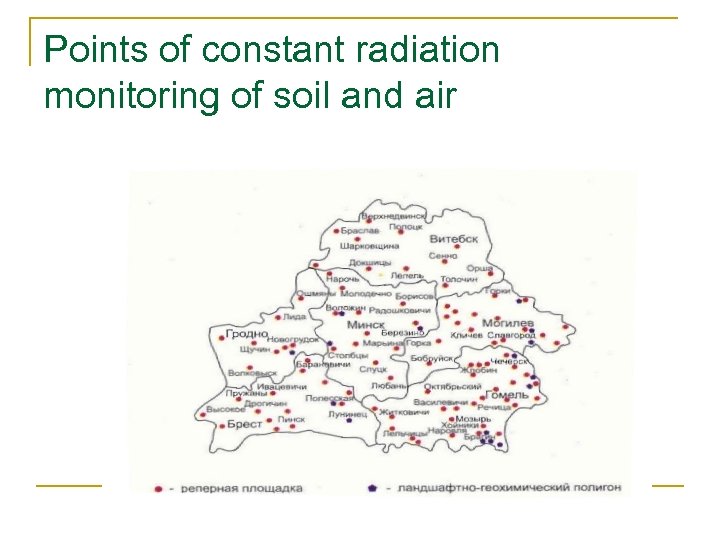 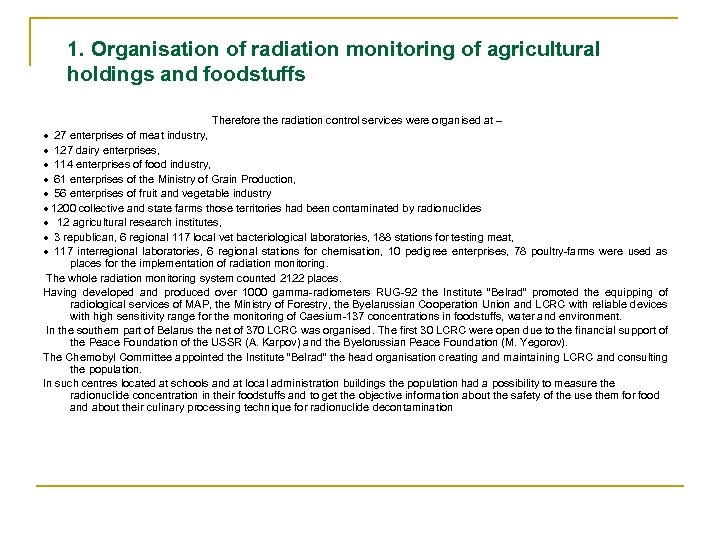 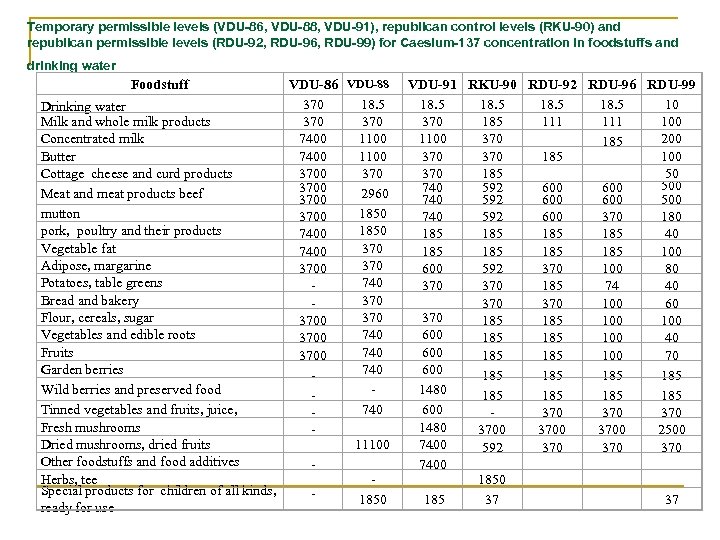 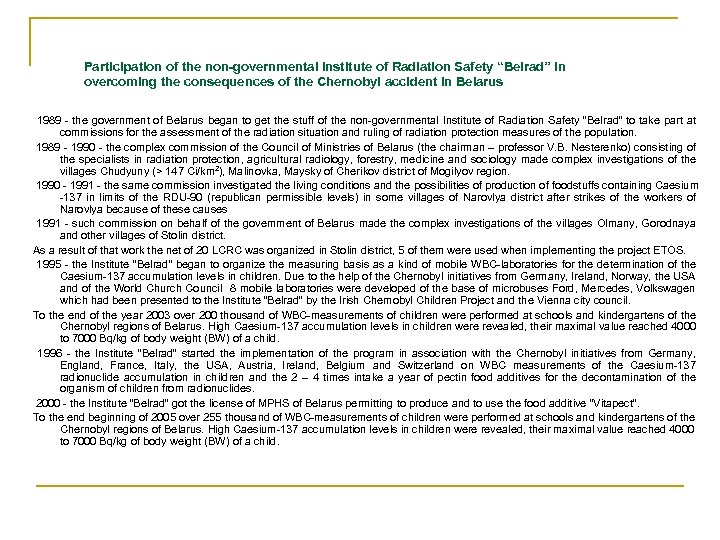 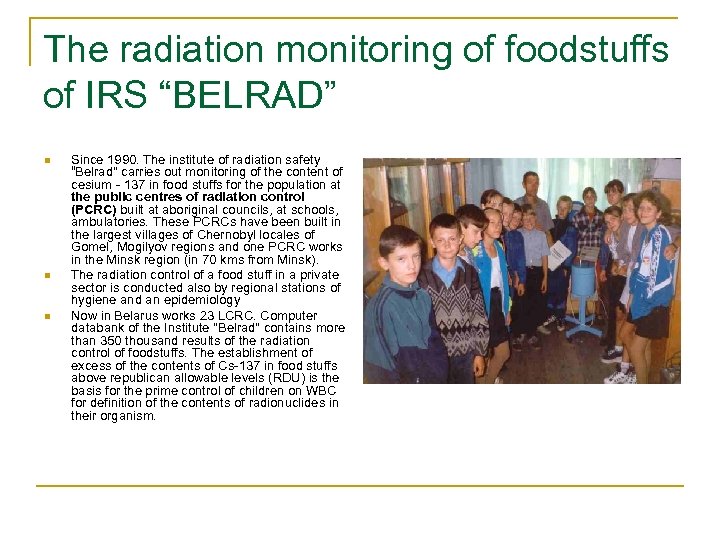 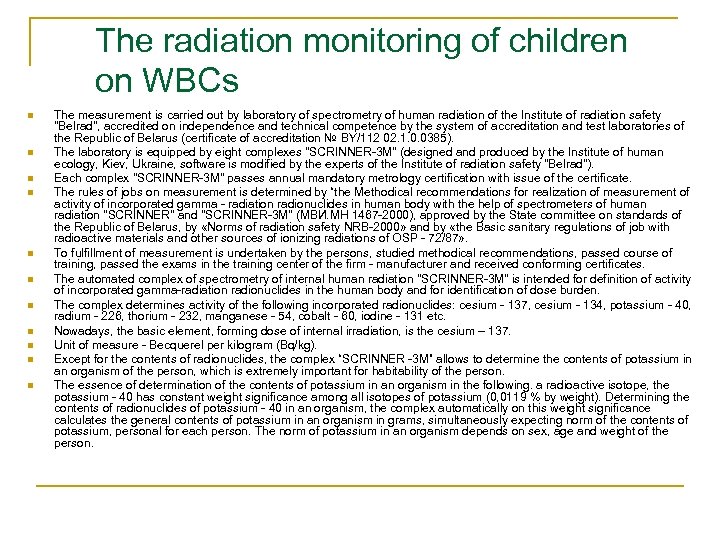 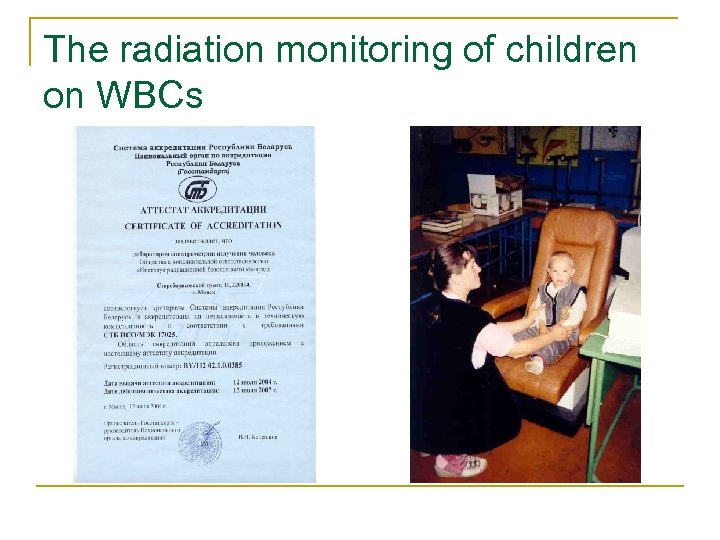 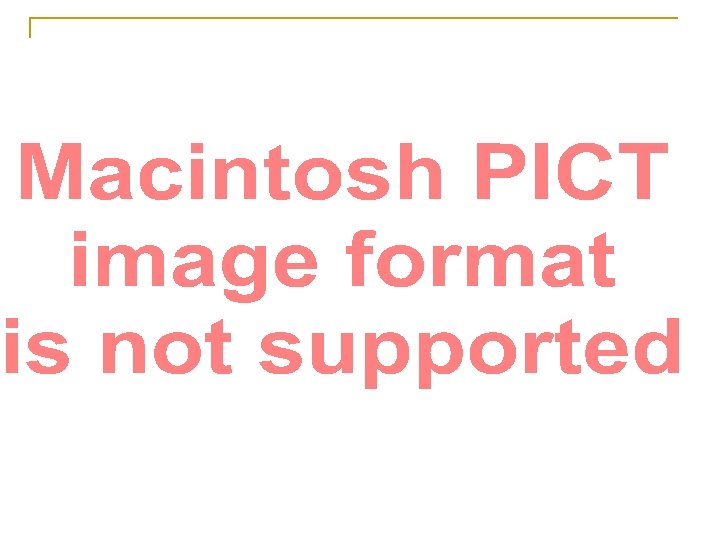 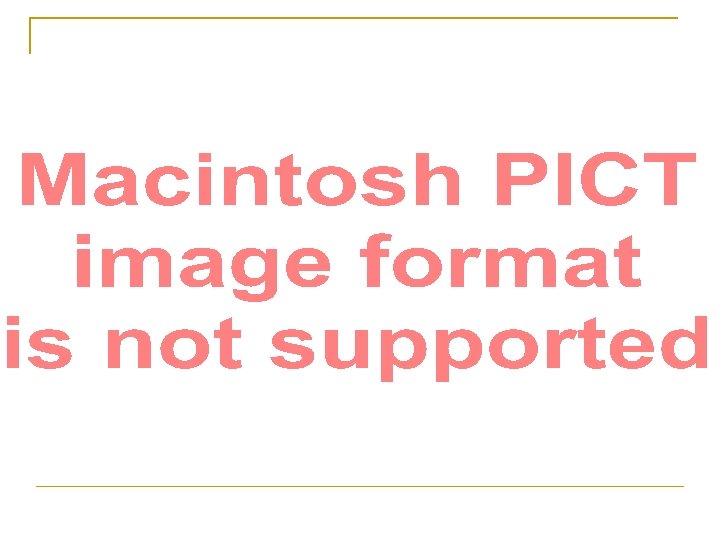 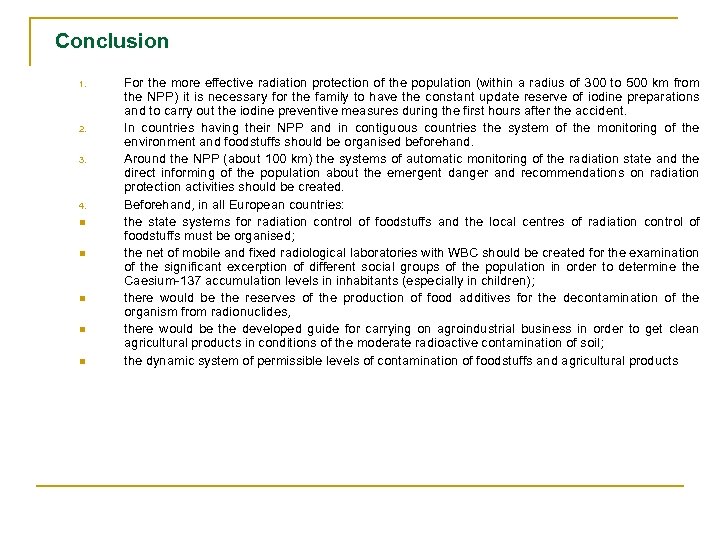 Points of constant radiation monitoring of soil and air

1. Organisation of radiation monitoring of agricultural holdings and foodstuffs Therefore the radiation control services were organised at – · 27 enterprises of meat industry, · 127 dairy enterprises, · 114 enterprises of food industry, · 61 enterprises of the Ministry of Grain Production, · 56 enterprises of fruit and vegetable industry · 1200 collective and state farms those territories had been contaminated by radionuclides · 12 agricultural research institutes, · 3 republican, 6 regional 117 local vet bacteriological laboratories, 188 stations for testing meat, · 117 interregional laboratories, 6 regional stations for chemisation, 10 pedigree enterprises, 78 poultry-farms were used as places for the implementation of radiation monitoring. The whole radiation monitoring system counted 2122 places. Having developed and produced over 1000 gamma-radiometers RUG-92 the Institute “Belrad” promoted the equipping of radiological services of MAP, the Ministry of Forestry, the Byelarussian Cooperation Union and LCRC with reliable devices with high sensitivity range for the monitoring of Caesium-137 concentrations in foodstuffs, water and environment. In the southern part of Belarus the net of 370 LCRC was organised. The first 30 LCRC were open due to the financial support of the Peace Foundation of the USSR (A. Karpov) and the Byelorussian Peace Foundation (M. Yegorov). The Chernobyl Committee appointed the Institute “Belrad” the head organisation creating and maintaining LCRC and consulting the population. In such centres located at schools and at local administration buildings the population had a possibility to measure the radionuclide concentration in their foodstuffs and to get the objective information about the safety of the use them for food and about their culinary processing technique for radionuclide decontamination

The radiation monitoring of foodstuffs of IRS “BELRAD” n n n Since 1990. The institute of radiation safety “Belrad" carries out monitoring of the content of cesium - 137 in food stuffs for the population at the public centres of radiation control (PCRC) built at aboriginal councils, at schools, ambulatories. These PCRCs have been built in the largest villages of Chernobyl locales of Gomel, Mogilyov regions and one PCRC works in the Minsk region (in 70 kms from Minsk). The radiation control of a food stuff in a private sector is conducted also by regional stations of hygiene and an epidemiology Now in Belarus works 23 LCRC. Computer databank of the Institute "Belrad" contains more than 350 thousand results of the radiation control of foodstuffs. The establishment of excess of the contents of Cs-137 in food stuffs above republican allowable levels (RDU) is the basis for the prime control of children on WBC for definition of the contents of radionuclides in their organism.

The radiation monitoring of children on WBCs n n n The measurement is carried out by laboratory of spectrometry of human radiation of the Institute of radiation safety "Belrad", accredited on independence and technical competence by the system of accreditation and test laboratories of the Republic of Belarus (certificate of accreditation № BY/112 02. 1. 0. 0385). The laboratory is equipped by eight complexes "SCRINNER-3 М" (designed and produced by the Institute of human ecology, Kiev, Ukraine, software is modified by the experts of the Institute of radiation safety "Belrad"). Each complex "SCRINNER-3 М" passes annual mandatory metrology certification with issue of the certificate. The rules of jobs on measurement is determined by “the Methodical recommendations for realization of measurement of activity of incorporated gamma - radiation radionuclides in human body with the help of spectrometers of human radiation "SCRINNER" and "SCRINNER-3 М" (МВИ. МН 1467 -2000), approved by the State committee on standards of the Republic of Belarus, by «Norms of radiation safety NRB-2000» and by «the Basic sanitary regulations of job with radioactive materials and other sources of ionizing radiations of OSP - 72/87» . To fulfillment of measurement is undertaken by the persons, studied methodical recommendations, passed course of training, passed the exams in the training center of the firm - manufacturer and received conforming certificates. The automated complex of spectrometry of internal human radiation "SCRINNER-3 М" is intended for definition of activity of incorporated gamma-radiation radionuclides in the human body and for identification of dose burden. The complex determines activity of the following incorporated radionuclides: cesium - 137, cesium - 134, potassium - 40, radium - 226, thorium - 232, manganese - 54, cobalt - 60, iodine - 131 etc. Nowadays, the basic element, forming dose of internal irradiation, is the cesium – 137. Unit of measure - Becquerel per kilogram (Bq/kg). Except for the contents of radionuclides, the complex “SCRINNER -3 М” allows to determine the contents of potassium in an organism of the person, which is extremely important for habitability of the person. The essence of determination of the contents of potassium in an organism in the following. a radioactive isotope, the potassium - 40 has constant weight significance among all isotopes of potassium (0, 0119 % by weight). Determining the contents of radionuclides of potassium - 40 in an organism, the complex automatically on this weight significance calculates the general contents of potassium in an organism in grams, simultaneously expecting norm of the contents of potassium, personal for each person. The norm of potassium in an organism depends on sex, age and weight of the person.

The radiation monitoring of children on WBCs

Conclusion 1. 2. 3. 4. n n n For the more effective radiation protection of the population (within a radius of 300 to 500 km from the NPP) it is necessary for the family to have the constant update reserve of iodine preparations and to carry out the iodine preventive measures during the first hours after the accident. In countries having their NPP and in contiguous countries the system of the monitoring of the environment and foodstuffs should be organised beforehand. Around the NPP (about 100 km) the systems of automatic monitoring of the radiation state and the direct informing of the population about the emergent danger and recommendations on radiation protection activities should be created. Beforehand, in all European countries: the state systems for radiation control of foodstuffs and the local centres of radiation control of foodstuffs must be organised; the net of mobile and fixed radiological laboratories with WBC should be created for the examination of the significant excerption of different social groups of the population in order to determine the Caesium-137 accumulation levels in inhabitants (especially in children); there would be the reserves of the production of food additives for the decontamination of the organism from radionuclides, there would be the developed guide for carrying on agroindustrial business in order to get clean agricultural products in conditions of the moderate radioactive contamination of soil; the dynamic system of permissible levels of contamination of foodstuffs and agricultural products

New Year and Christmas in the Republic of