The Cheetah and the Sloth Based on The 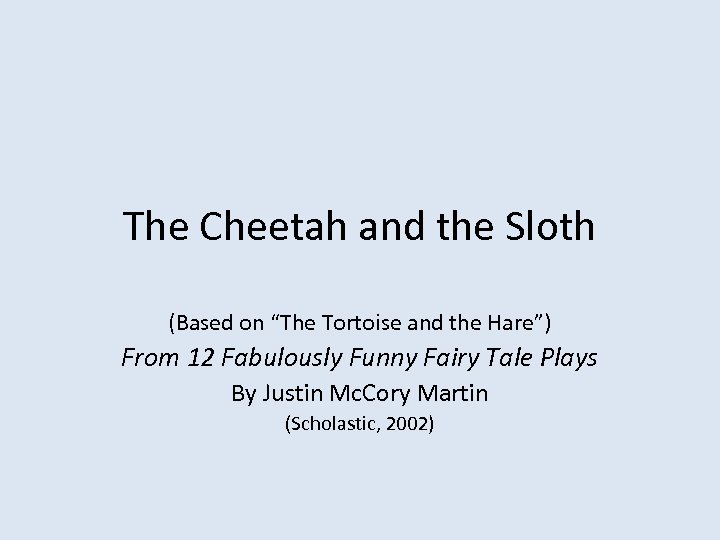 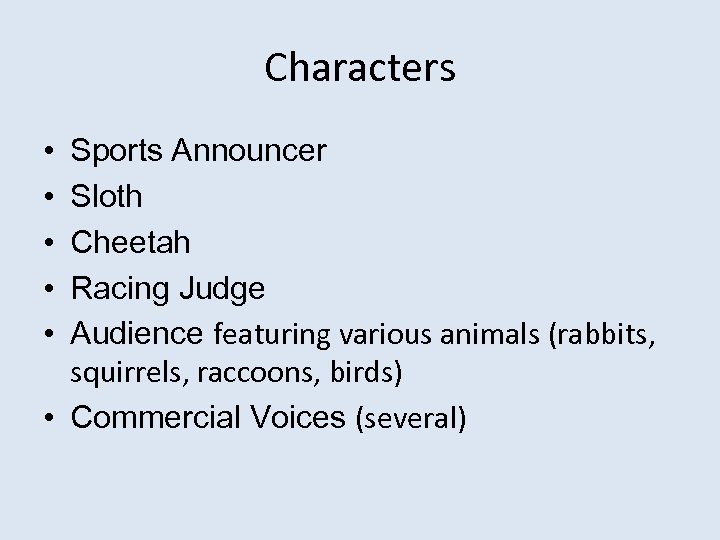 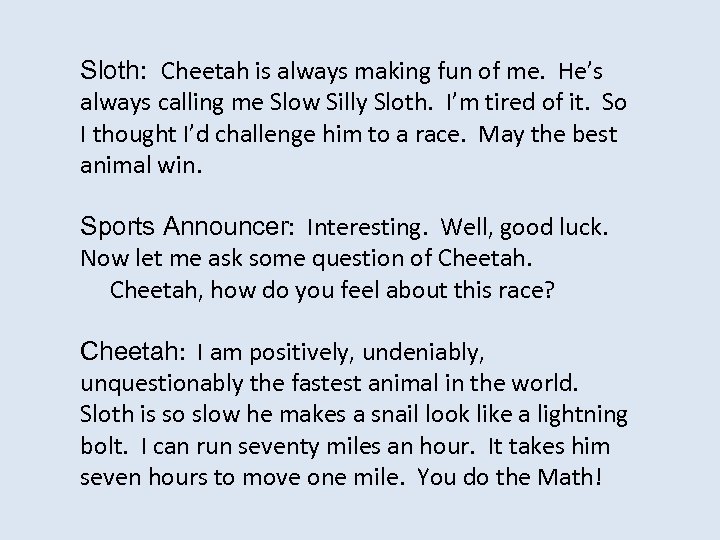 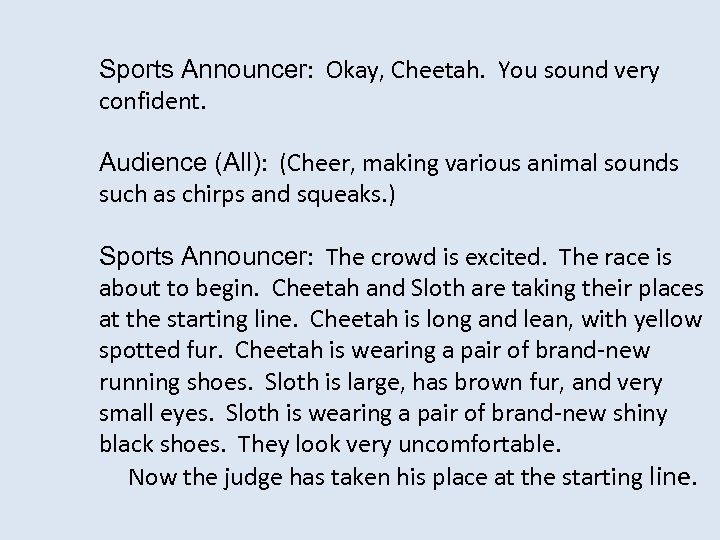 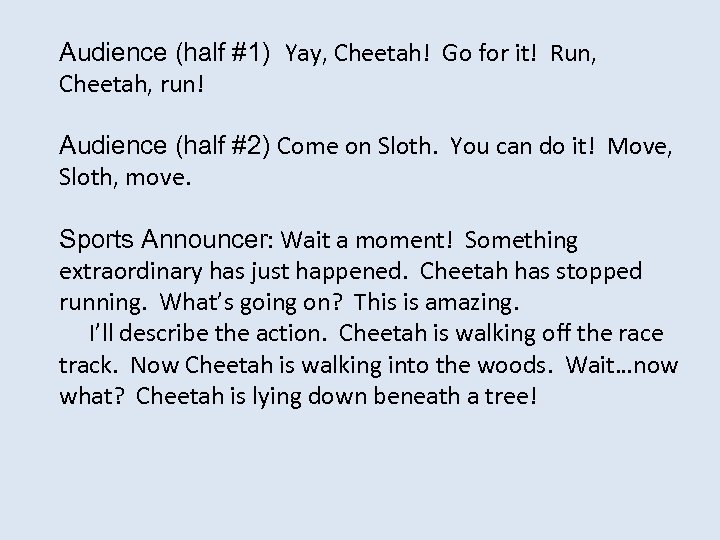 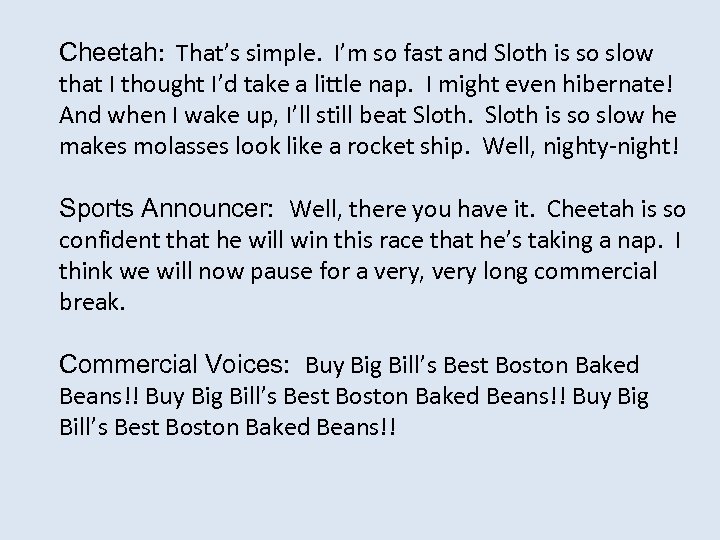 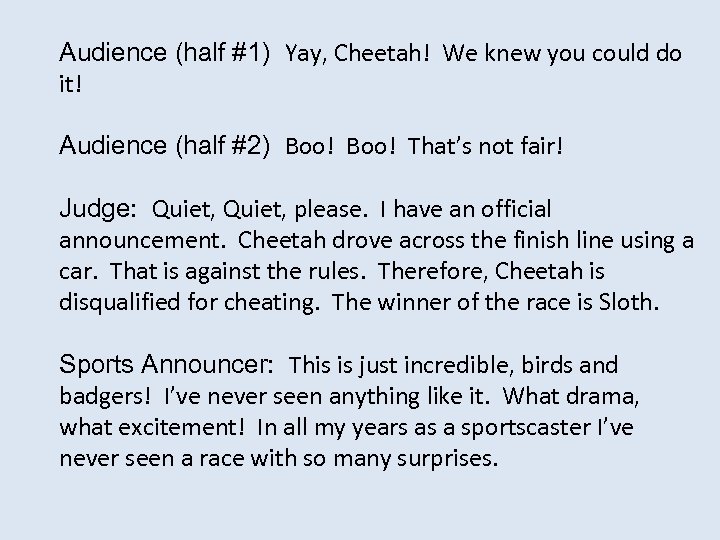 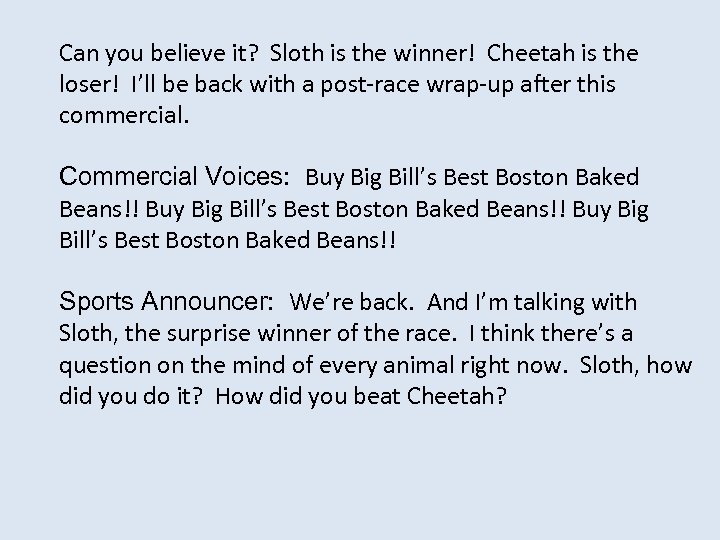 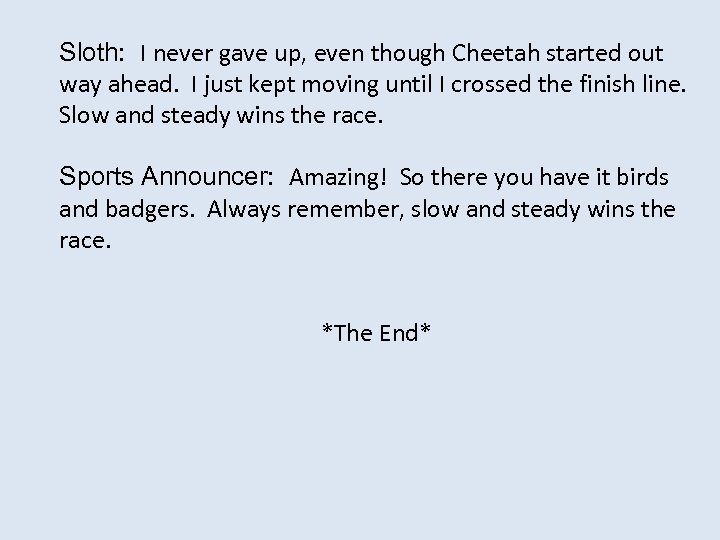 Скачать презентацию The Cheetah and the Sloth Based on The

The Cheetah and the Sloth (Based on “The Tortoise and the Hare”) From 12 Fabulously Funny Fairy Tale Plays By Justin Mc. Cory Martin (Scholastic, 2002)

• Sports Announcer: Welcome, birds and badgers, and various other animals of the forest. We are gathered here today for the racing event of the season. Sloth has challenged Cheetah to a race. I'm down at the starting line for exclusive interviews with both racers. My first question is for Sloth, you're the slowest animal in the forest. Why in the world are you racing against Cheetah?

Sloth: Cheetah is always making fun of me. He’s always calling me Slow Silly Sloth. I’m tired of it. So I thought I’d challenge him to a race. May the best animal win. Sports Announcer: Interesting. Well, good luck. Now let me ask some question of Cheetah, how do you feel about this race? Cheetah: I am positively, undeniably, unquestionably the fastest animal in the world. Sloth is so slow he makes a snail look like a lightning bolt. I can run seventy miles an hour. It takes him seven hours to move one mile. You do the Math!

Sports Announcer: Okay, Cheetah. You sound very confident. Audience (All): (Cheer, making various animal sounds such as chirps and squeaks. ) Sports Announcer: The crowd is excited. The race is about to begin. Cheetah and Sloth are taking their places at the starting line. Cheetah is long and lean, with yellow spotted fur. Cheetah is wearing a pair of brand-new running shoes. Sloth is large, has brown fur, and very small eyes. Sloth is wearing a pair of brand-new shiny black shoes. They look very uncomfortable. Now the judge has taken his place at the starting line.

Judge. On your mark, get set, go! Sports Announcer: And they’re off! Audience: (All): (Cheer with animal noises. ) Sports Announcer: Cheetah’s in the lead, streaking along at tremendous speed. Meanwhile, Sloth is moving off the starting line very slowly. In fact, I’m not even sure whether Sloth has actually started the race. Wait a minute, Sloth appears to have moved forward just slightly. Now back to Cheetah’s running at incredible speed. Will you just look at that! Cheetah’s already at the halfway point of the race and showing no sign of slowing down.

Audience (half #1) Yay, Cheetah! Go for it! Run, Cheetah, run! Audience (half #2) Come on Sloth. You can do it! Move, Sloth, move. Sports Announcer: Wait a moment! Something extraordinary has just happened. Cheetah has stopped running. What’s going on? This is amazing. I’ll describe the action. Cheetah is walking off the race track. Now Cheetah is walking into the woods. Wait…now what? Cheetah is lying down beneath a tree!

Birds and badgers, this in incredible. In all my years as a sportscaster I’ve never seen anything like it. Cheetah appears to be lying down and taking a nap. Audience (half #1) C’mon, Cheetah! Get up, Cheetah, get up! Audience (half #2) Faster, Sloth, faster. You can catch the Cheetah. Sports Announcer. I am in the forest now. I have an exclusive interview with Cheetah, there's’ a question that must be on every animal’s mind right now. Why have you stopped running?

Cheetah: That’s simple. I’m so fast and Sloth is so slow that I thought I’d take a little nap. I might even hibernate! And when I wake up, I’ll still beat Sloth is so slow he makes molasses look like a rocket ship. Well, nighty-night! Sports Announcer: Well, there you have it. Cheetah is so confident that he will win this race that he’s taking a nap. I think we will now pause for a very, very long commercial break. Commercial Voices: Buy Big Bill’s Best Boston Baked Beans!!

Sports Announcer: We’re back, live from the race between Cheetah and Sloth. Birds and badgers, this is shaping up to be an amazing race. Cheetah is in the middle of a very long nap. Meanwhile, Sloth has inched along and is drawing close to the finish line. Incredible! Audience (half #2) Go, Sloth, go! You can win this race! Audience (half #1) Wake up, Cheetah, wake up! Sloth is going to beat you! Sports Announcer: I’m down near the finish line. I have an exclusive interview with Sloth, now leading this race. Sloth, do you think you have a chance to win? Do you think you can beat Cheetah?

Audience (half #1) Yay, Cheetah! We knew you could do it! Audience (half #2) Boo! That’s not fair! Judge: Quiet, please. I have an official announcement. Cheetah drove across the finish line using a car. That is against the rules. Therefore, Cheetah is disqualified for cheating. The winner of the race is Sloth. Sports Announcer: This is just incredible, birds and badgers! I’ve never seen anything like it. What drama, what excitement! In all my years as a sportscaster I’ve never seen a race with so many surprises.

Can you believe it? Sloth is the winner! Cheetah is the loser! I’ll be back with a post-race wrap-up after this commercial. Commercial Voices: Buy Big Bill’s Best Boston Baked Beans!! Sports Announcer: We’re back. And I’m talking with Sloth, the surprise winner of the race. I think there’s a question on the mind of every animal right now. Sloth, how did you do it? How did you beat Cheetah?