The Battle for a Jewish State The diplomatic 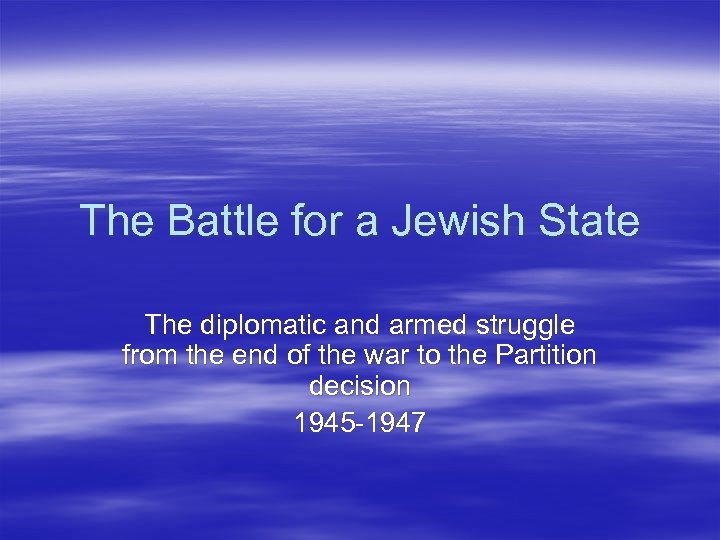 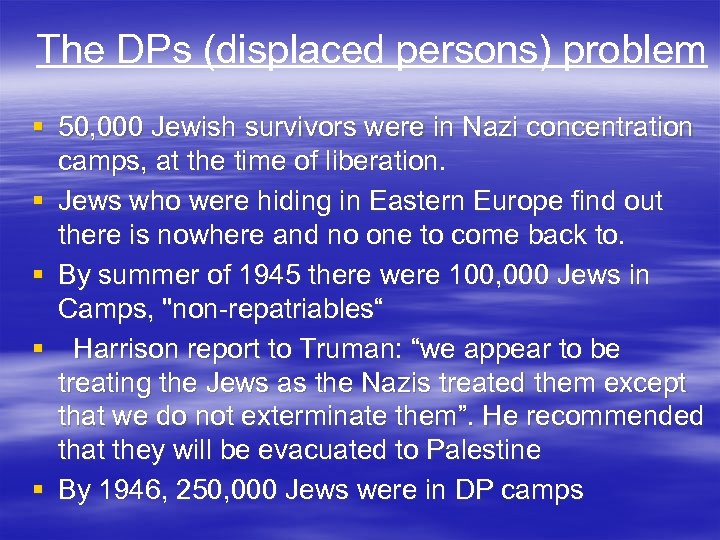 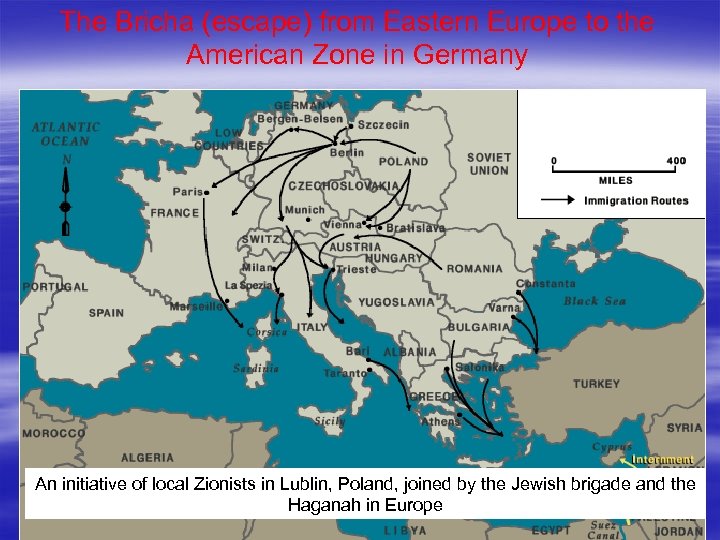 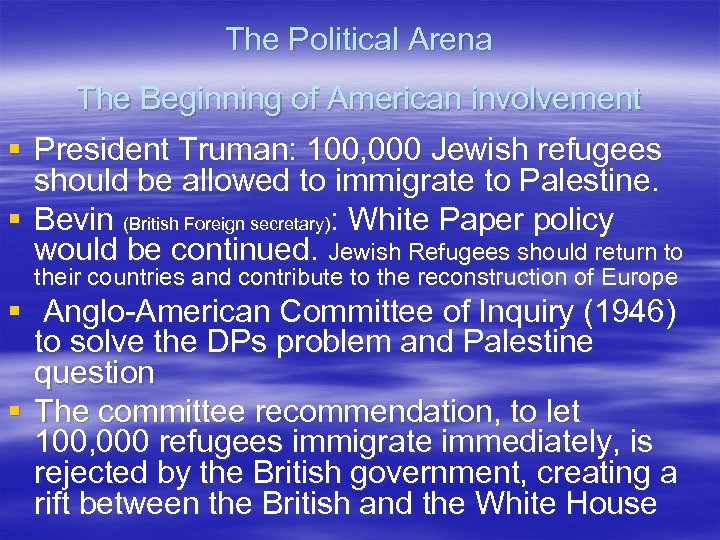 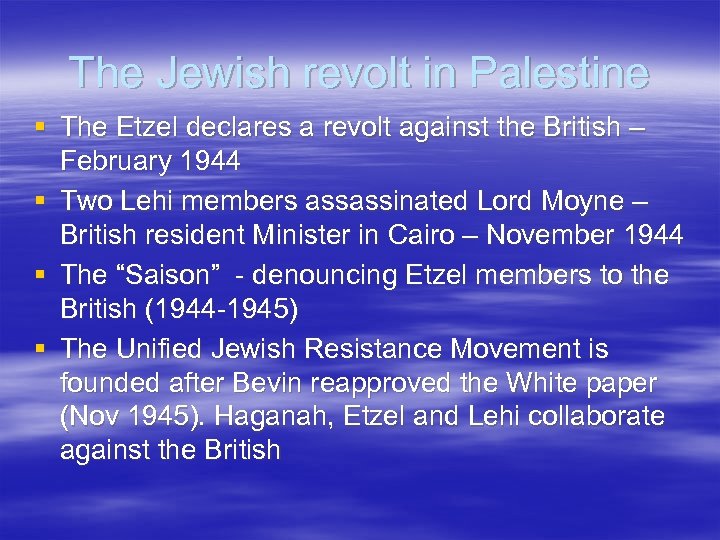 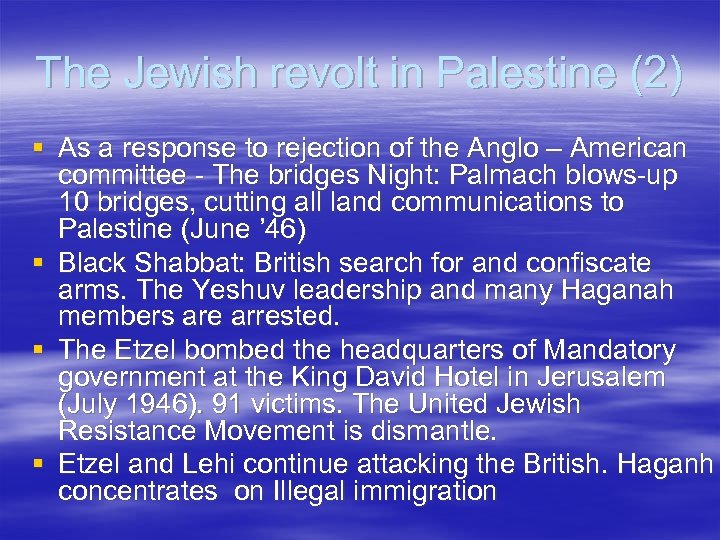 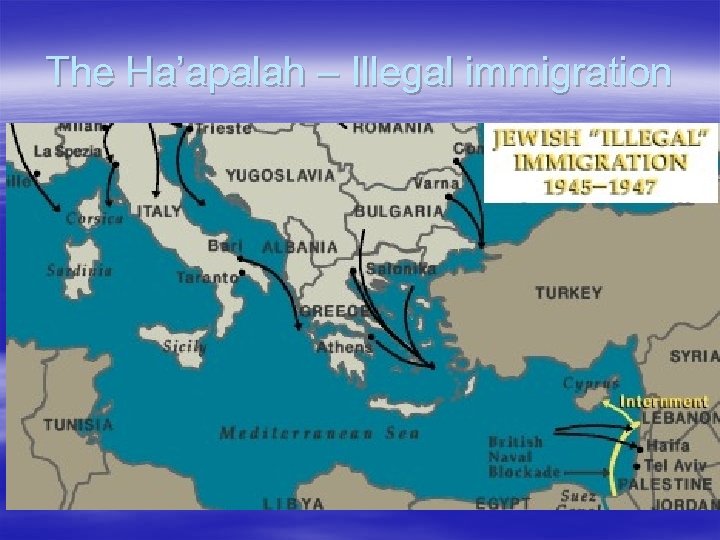 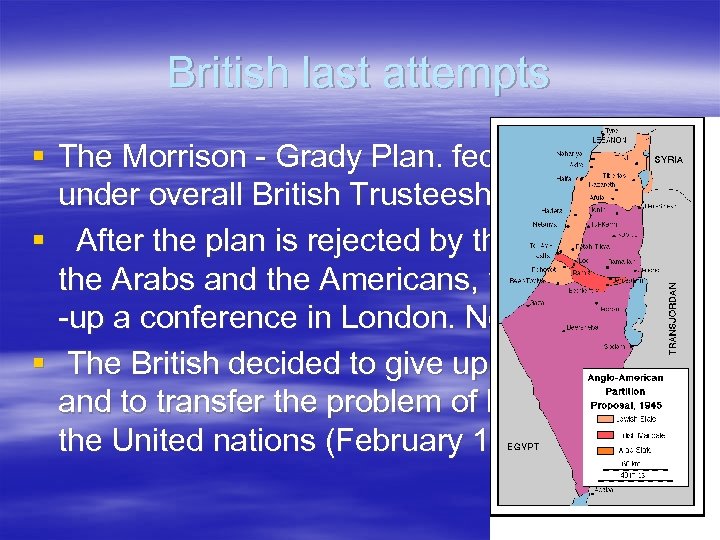 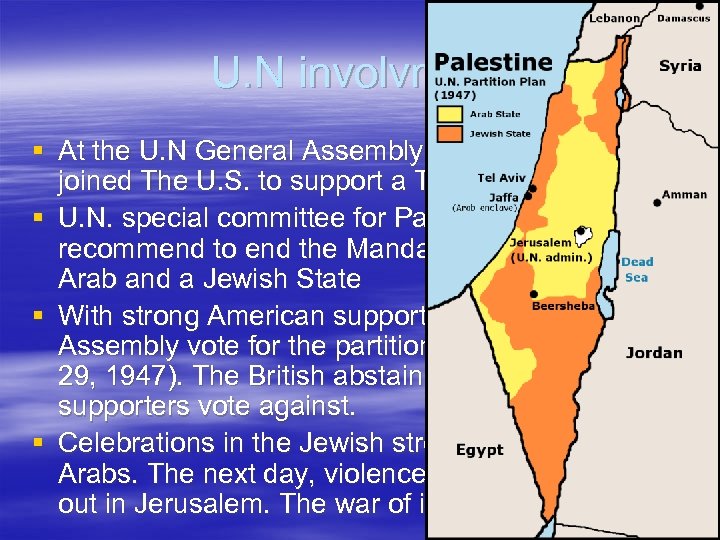 Скачать презентацию The Battle for a Jewish State The diplomatic

The DPs (displaced persons) problem § 50, 000 Jewish survivors were in Nazi concentration camps, at the time of liberation. § Jews who were hiding in Eastern Europe find out there is nowhere and no one to come back to. § By summer of 1945 there were 100, 000 Jews in Camps, "non-repatriables“ § Harrison report to Truman: “we appear to be treating the Jews as the Nazis treated them except that we do not exterminate them”. He recommended that they will be evacuated to Palestine § By 1946, 250, 000 Jews were in DP camps

The Bricha (escape) from Eastern Europe to the American Zone in Germany An initiative of local Zionists in Lublin, Poland, joined by the Jewish brigade and the Haganah in Europe

The Political Arena The Beginning of American involvement § President Truman: 100, 000 Jewish refugees should be allowed to immigrate to Palestine. § Bevin (British Foreign secretary): White Paper policy would be continued. Jewish Refugees should return to their countries and contribute to the reconstruction of Europe § Anglo-American Committee of Inquiry (1946) to solve the DPs problem and Palestine question § The committee recommendation, to let 100, 000 refugees immigrate immediately, is rejected by the British government, creating a rift between the British and the White House

The Jewish revolt in Palestine § The Etzel declares a revolt against the British – February 1944 § Two Lehi members assassinated Lord Moyne – British resident Minister in Cairo – November 1944 § The “Saison” - denouncing Etzel members to the British (1944 -1945) § The Unified Jewish Resistance Movement is founded after Bevin reapproved the White paper (Nov 1945). Haganah, Etzel and Lehi collaborate against the British

The Jewish revolt in Palestine (2) § As a response to rejection of the Anglo – American committee - The bridges Night: Palmach blows-up 10 bridges, cutting all land communications to Palestine (June ’ 46) § Black Shabbat: British search for and confiscate arms. The Yeshuv leadership and many Haganah members are arrested. § The Etzel bombed the headquarters of Mandatory government at the King David Hotel in Jerusalem (July 1946). 91 victims. The United Jewish Resistance Movement is dismantle. § Etzel and Lehi continue attacking the British. Haganh concentrates on Illegal immigration

The Ha’apalah – Illegal immigration § The Bricha organization smuggled Jews who wanted to immigrate to Mediterranean ports in Europe. § The Mossad Le'aliyah Bet bought ships and hired crews. § 64 ships were sent during 1945 -1947 with 70, 000 illegal immigrants § British put a naval blockade on Palestine. 70% of the immigrants were caught and sent to Cyprus § The influence on public opinion, of british fighting against survivors, was huge.

British last attempts § The Morrison - Grady Plan. federalization under overall British Trusteeship § After the plan is rejected by the Zionists, the Arabs and the Americans, the British set -up a conference in London. No results. § The British decided to give up the Mandate and to transfer the problem of Palestine to the United nations (February 1947).

U. N involvment § At the U. N General Assembly the Soviet Union joined The U. S. to support a Two States solution § U. N. special committee for Palestine (UNSCOP) recommend to end the Mandate and establish an Arab and a Jewish State § With strong American support, the U. N General Assembly vote for the partition decision (November 29, 1947). The British abstain, the Arabs and their supporters vote against. § Celebrations in the Jewish streets, anger among Arabs. The next day, violence against Jews brake out in Jerusalem. The war of independence starts