The article Use the definite article the 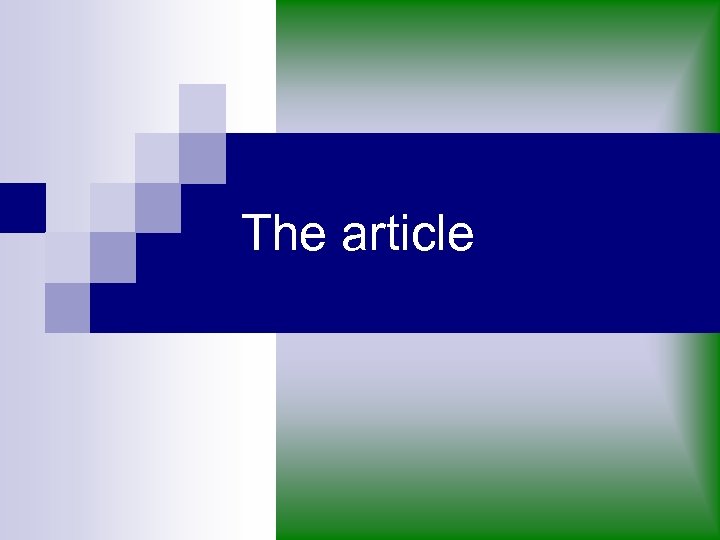 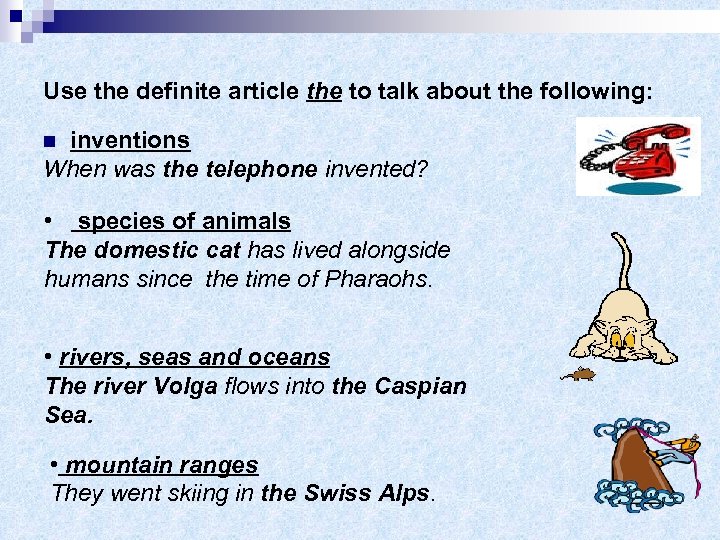 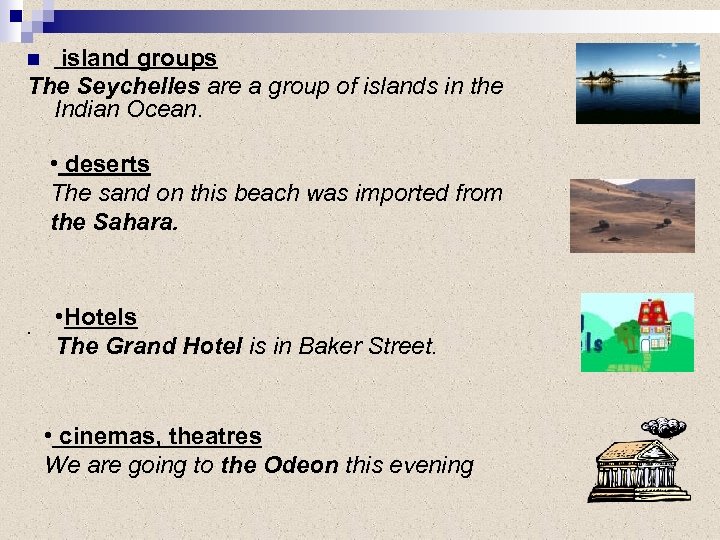 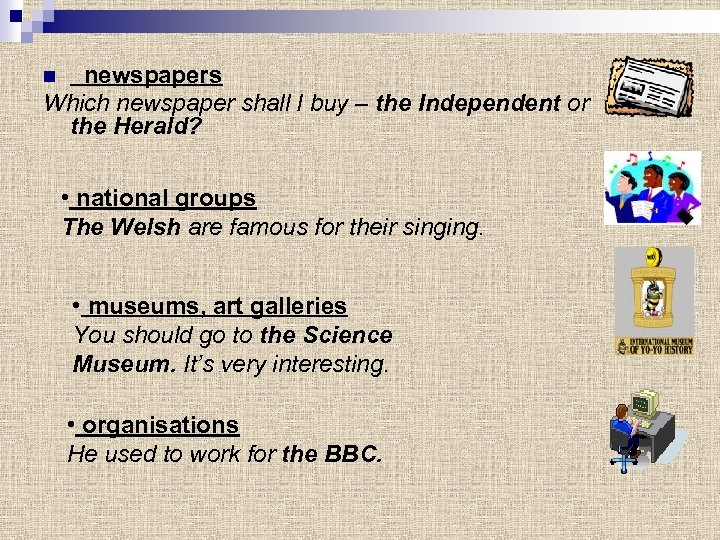 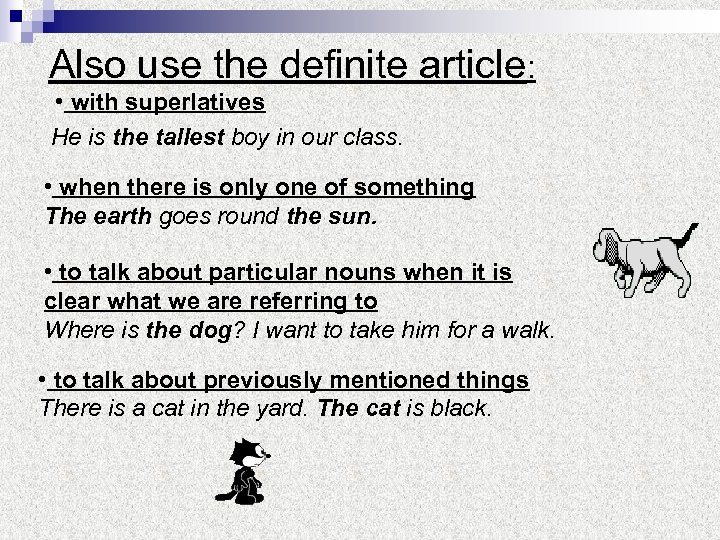 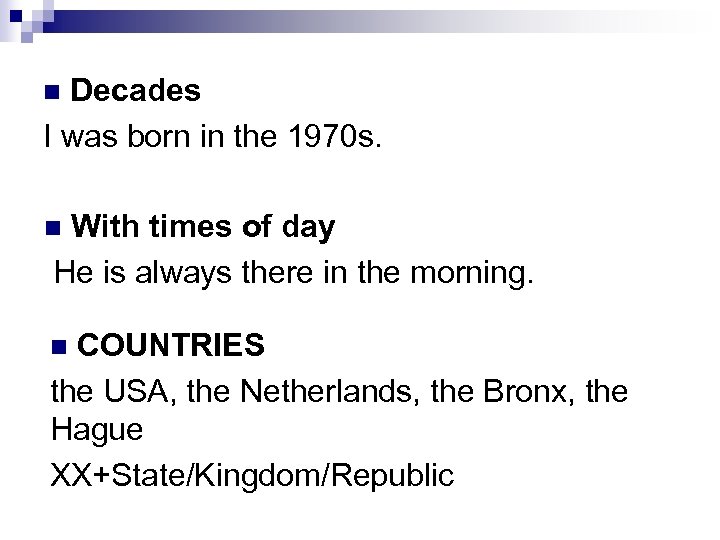 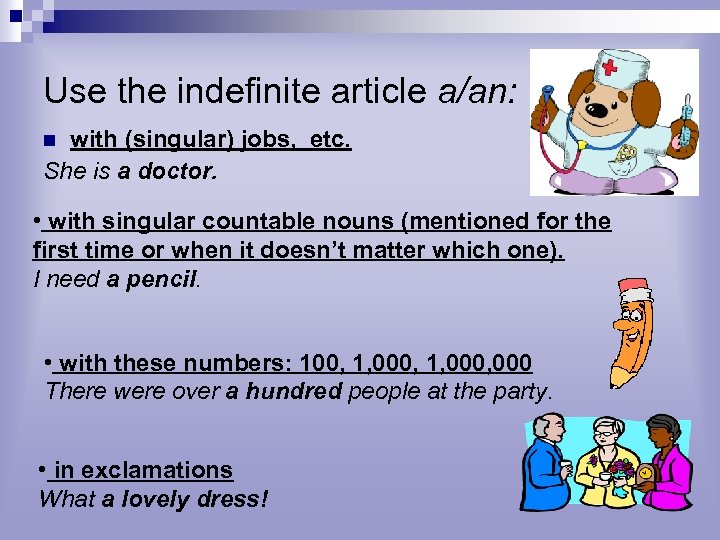 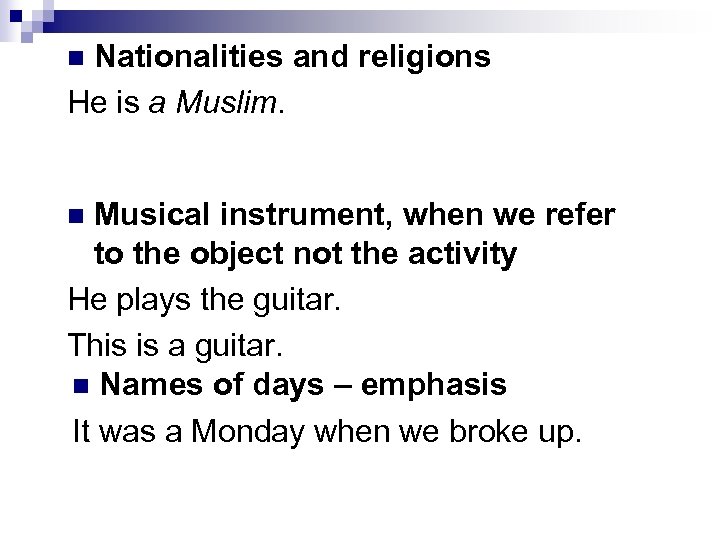 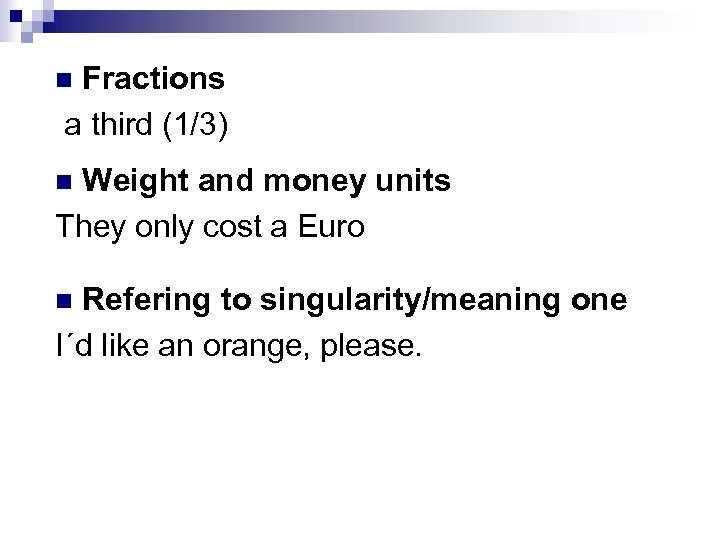 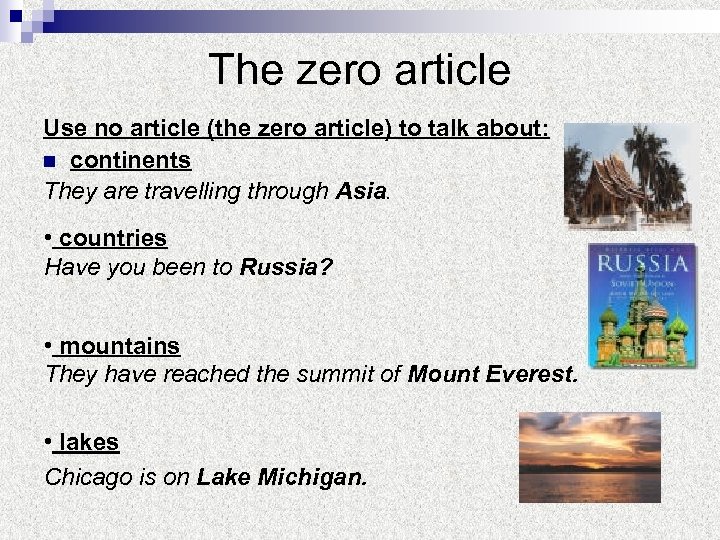 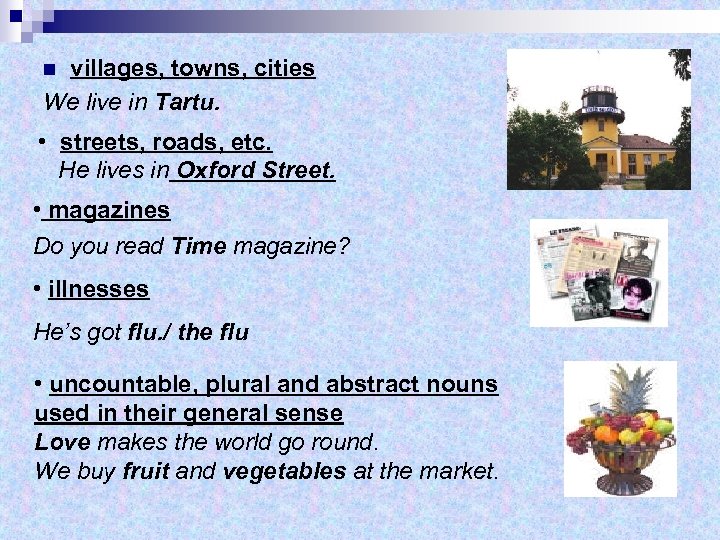 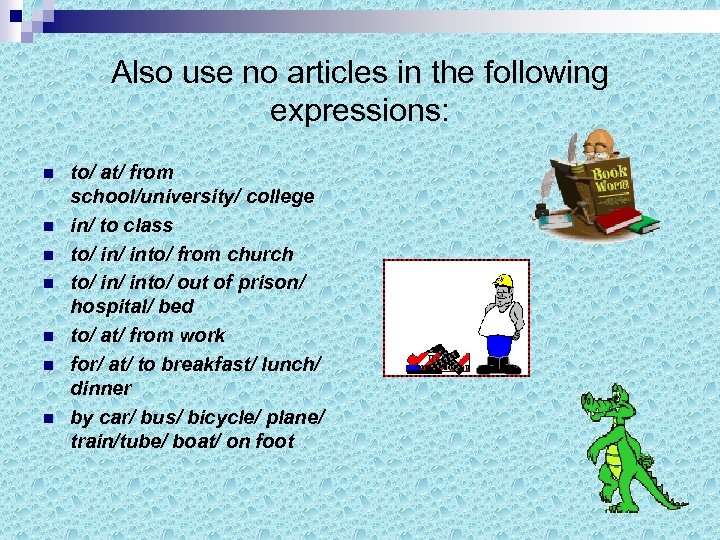 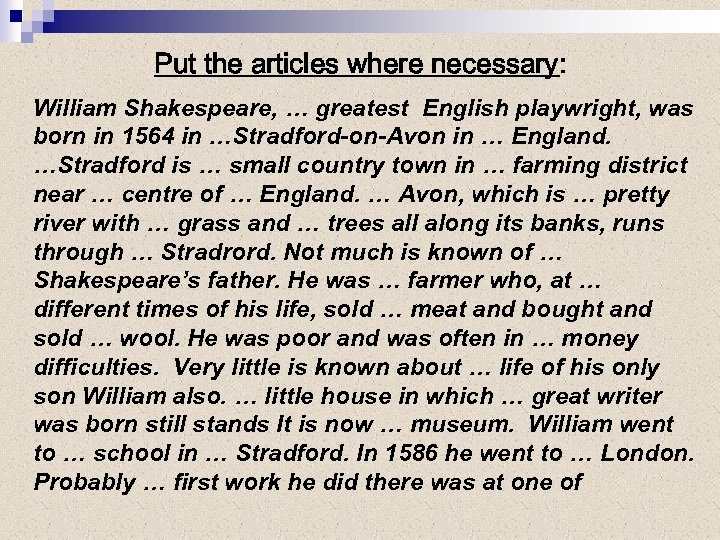 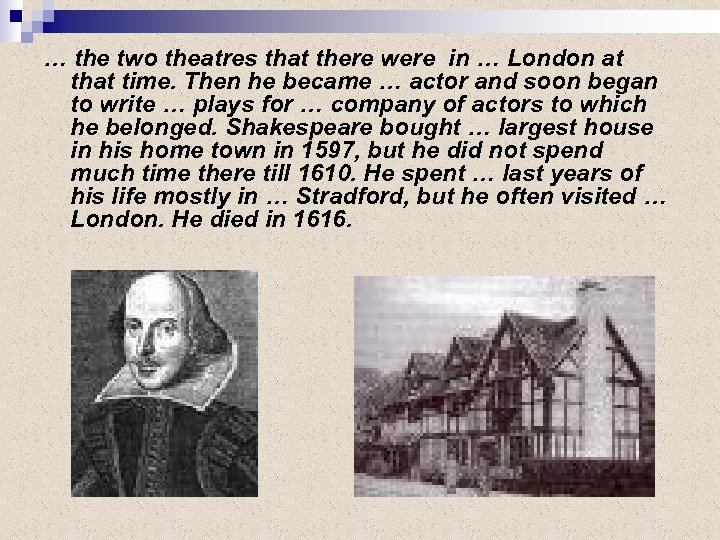 Скачать презентацию The article Use the definite article the

Use the definite article the to talk about the following: inventions When was the telephone invented? n • species of animals The domestic cat has lived alongside humans since the time of Pharaohs. • rivers, seas and oceans The river Volga flows into the Caspian Sea. • mountain ranges They went skiing in the Swiss Alps.

island groups The Seychelles are a group of islands in the Indian Ocean. n • deserts The sand on this beach was imported from the Sahara. . • Hotels The Grand Hotel is in Baker Street. • cinemas, theatres We are going to the Odeon this evening

newspapers Which newspaper shall I buy – the Independent or the Herald? n • national groups The Welsh are famous for their singing. • museums, art galleries You should go to the Science Museum. It’s very interesting. • organisations He used to work for the BBC.

Also use the definite article: • with superlatives He is the tallest boy in our class. • when there is only one of something The earth goes round the sun. • to talk about particular nouns when it is clear what we are referring to Where is the dog? I want to take him for a walk. • to talk about previously mentioned things There is a cat in the yard. The cat is black.

Decades I was born in the 1970 s. n With times of day He is always there in the morning. n COUNTRIES the USA, the Netherlands, the Bronx, the Hague XX+State/Kingdom/Republic n

Use the indefinite article a/an: with (singular) jobs, etc. She is a doctor. n • with singular countable nouns (mentioned for the first time or when it doesn’t matter which one). I need a pencil. • with these numbers: 100, 1, 000, 000 There were over a hundred people at the party. • in exclamations What a lovely dress!

Nationalities and religions He is a Muslim. n Musical instrument, when we refer to the object not the activity He plays the guitar. This is a guitar. n Names of days – emphasis It was a Monday when we broke up. n

Fractions a third (1/3) n Weight and money units They only cost a Euro n Refering to singularity/meaning one I´d like an orange, please. n

The zero article Use no article (the zero article) to talk about: n continents They are travelling through Asia. • countries Have you been to Russia? • mountains They have reached the summit of Mount Everest. • lakes Chicago is on Lake Michigan.

villages, towns, cities We live in Tartu. n • streets, roads, etc. He lives in Oxford Street. • magazines Do you read Time magazine? • illnesses He’s got flu. / the flu • uncountable, plural and abstract nouns used in their general sense Love makes the world go round. We buy fruit and vegetables at the market.

Also use no articles in the following expressions: n n n n to/ at/ from school/university/ college in/ to class to/ into/ from church to/ into/ out of prison/ hospital/ bed to/ at/ from work for/ at/ to breakfast/ lunch/ dinner by car/ bus/ bicycle/ plane/ train/tube/ boat/ on foot

Put the articles where necessary: William Shakespeare, … greatest English playwright, was born in 1564 in …Stradford-on-Avon in … England. …Stradford is … small country town in … farming district near … centre of … England. … Avon, which is … pretty river with … grass and … trees all along its banks, runs through … Stradrord. Not much is known of … Shakespeare’s father. He was … farmer who, at … different times of his life, sold … meat and bought and sold … wool. He was poor and was often in … money difficulties. Very little is known about … life of his only son William also. … little house in which … great writer was born still stands It is now … museum. William went to … school in … Stradford. In 1586 he went to … London. Probably … first work he did there was at one of

… the two theatres that there were in … London at that time. Then he became … actor and soon began to write … plays for … company of actors to which he belonged. Shakespeare bought … largest house in his home town in 1597, but he did not spend much time there till 1610. He spent … last years of his life mostly in … Stradford, but he often visited … London. He died in 1616.