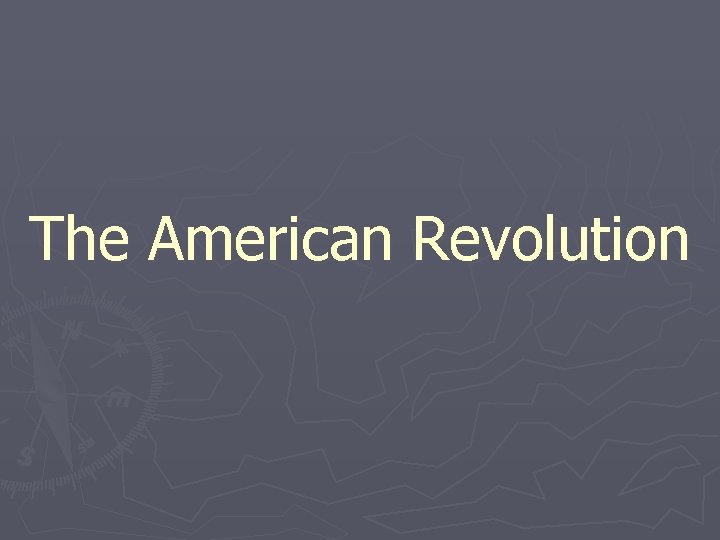 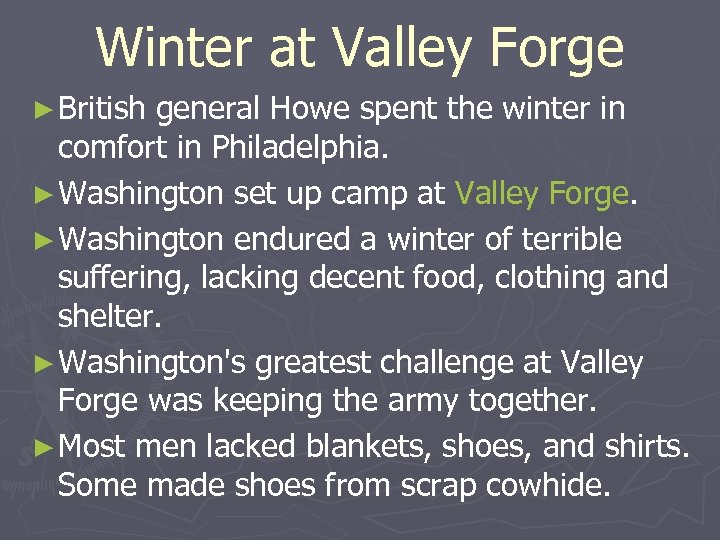 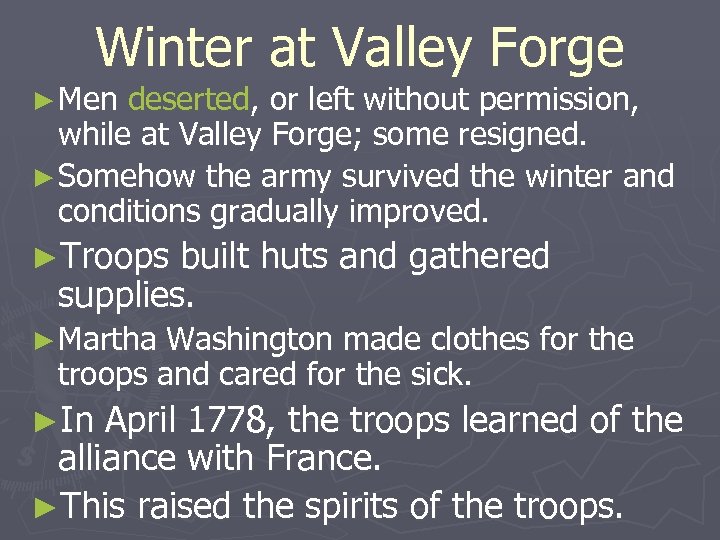 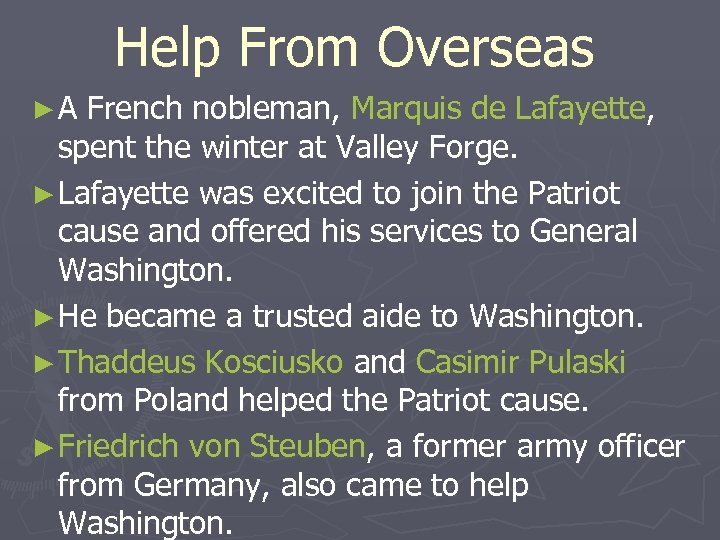 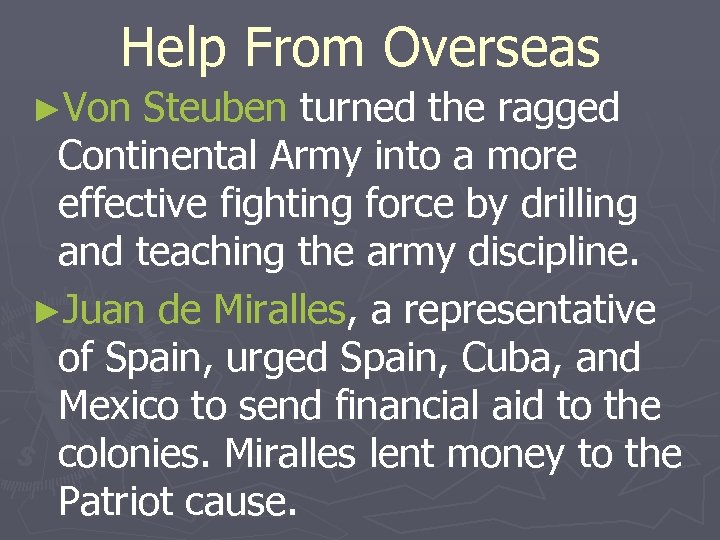 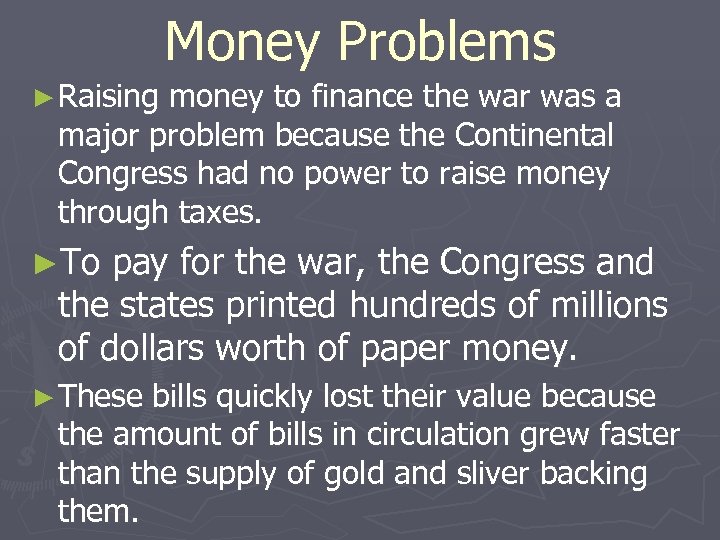 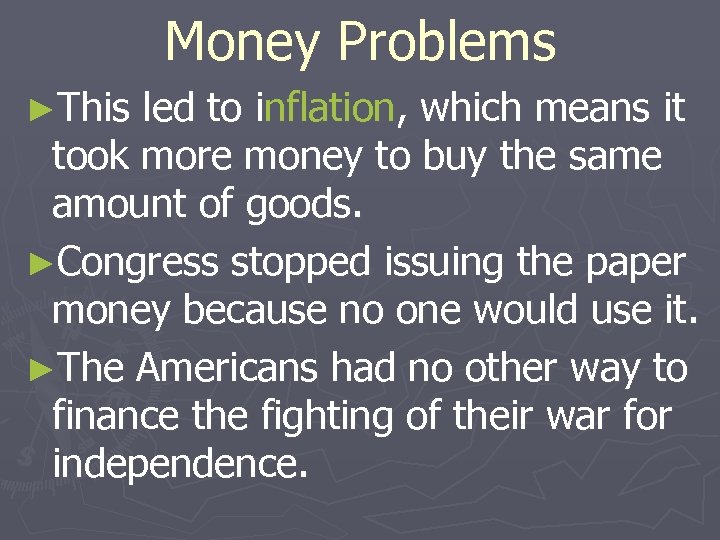 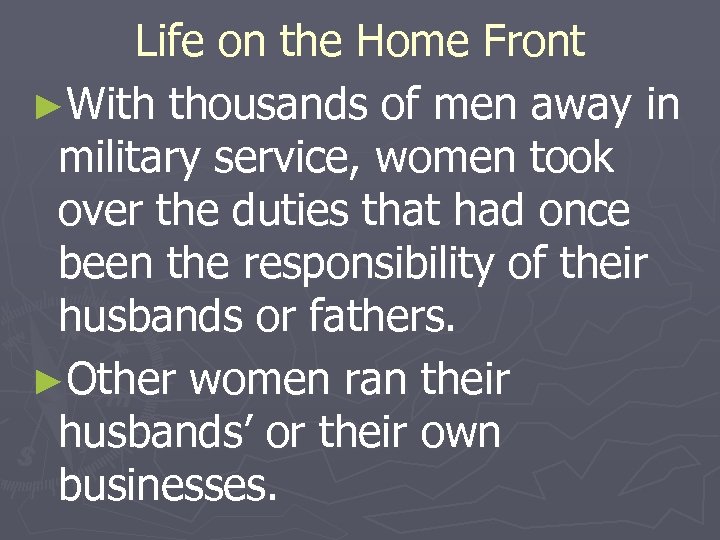 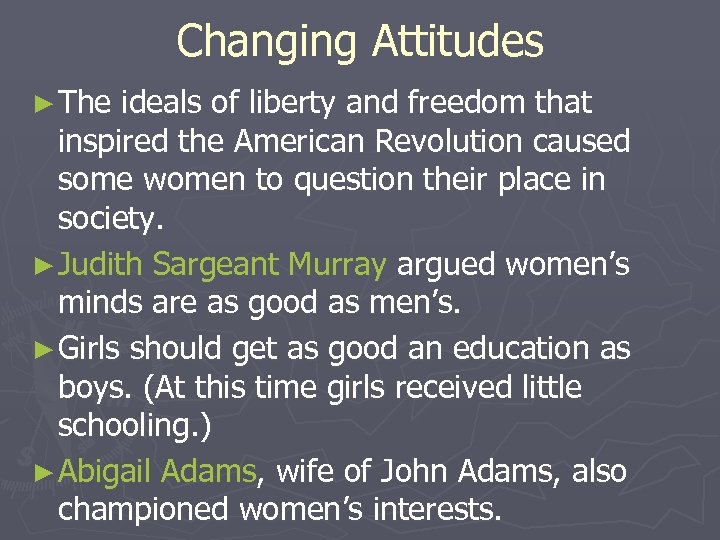 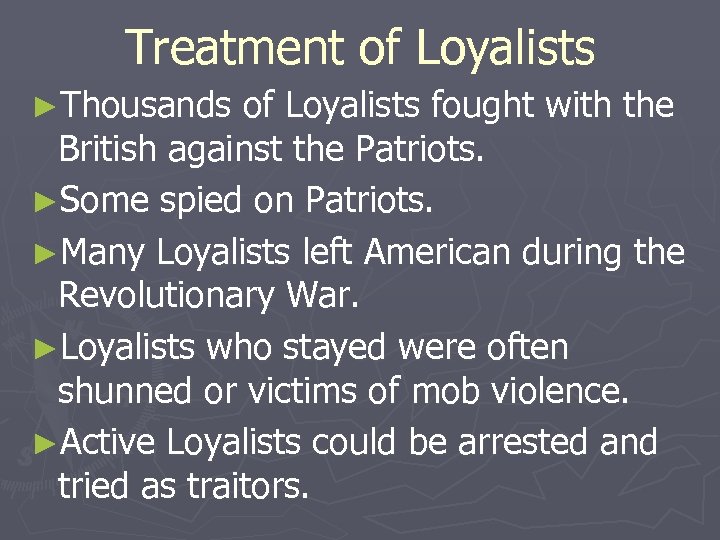 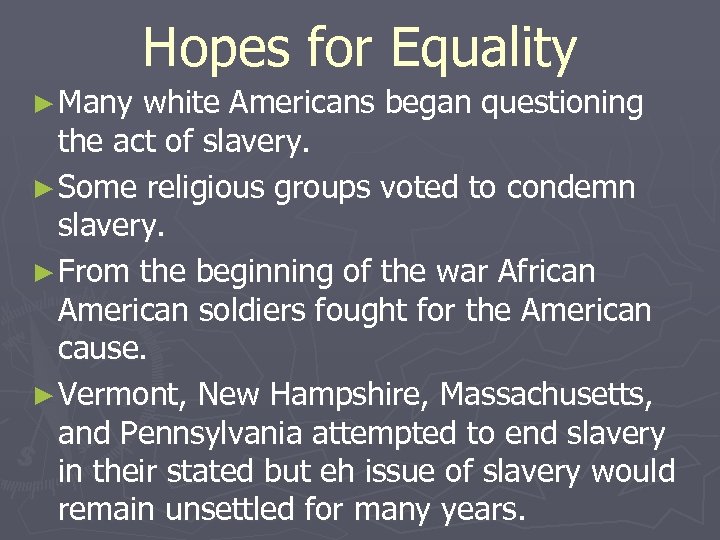 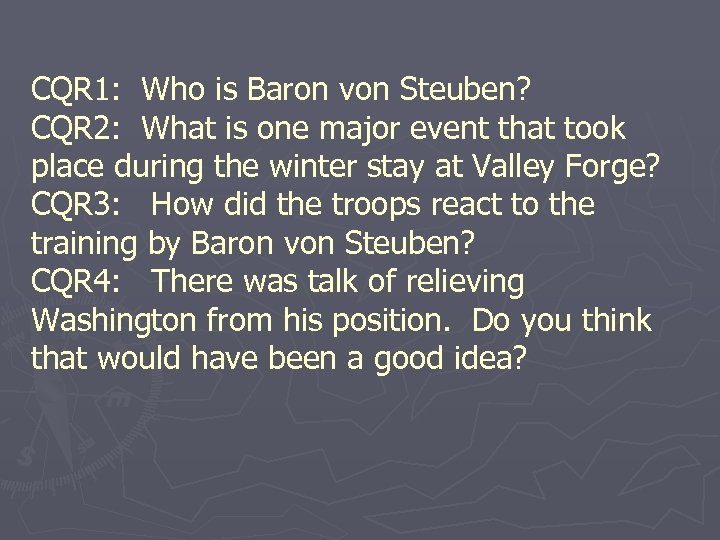 Winter at Valley Forge ► Men deserted, or left without permission, while at Valley Forge; some resigned. ► Somehow the army survived the winter and conditions gradually improved. ►Troops built huts and gathered supplies. ► Martha Washington made clothes for the troops and cared for the sick. ►In April 1778, the troops learned of the alliance with France. ►This raised the spirits of the troops.

Help From Overseas ►A French nobleman, Marquis de Lafayette, spent the winter at Valley Forge. ► Lafayette was excited to join the Patriot cause and offered his services to General Washington. ► He became a trusted aide to Washington. ► Thaddeus Kosciusko and Casimir Pulaski from Poland helped the Patriot cause. ► Friedrich von Steuben, a former army officer from Germany, also came to help Washington.

Help From Overseas ►Von Steuben turned the ragged Continental Army into a more effective fighting force by drilling and teaching the army discipline. ►Juan de Miralles, a representative of Spain, urged Spain, Cuba, and Mexico to send financial aid to the colonies. Miralles lent money to the Patriot cause.

Money Problems ► Raising money to finance the war was a major problem because the Continental Congress had no power to raise money through taxes. ►To pay for the war, the Congress and the states printed hundreds of millions of dollars worth of paper money. ► These bills quickly lost their value because the amount of bills in circulation grew faster than the supply of gold and sliver backing them.

Money Problems ►This led to inflation, which means it took more money to buy the same amount of goods. ►Congress stopped issuing the paper money because no one would use it. ►The Americans had no other way to finance the fighting of their war for independence.

Life on the Home Front ►With thousands of men away in military service, women took over the duties that had once been the responsibility of their husbands or fathers. ►Other women ran their husbands’ or their own businesses.

Changing Attitudes ► The ideals of liberty and freedom that inspired the American Revolution caused some women to question their place in society. ► Judith Sargeant Murray argued women’s minds are as good as men’s. ► Girls should get as good an education as boys. (At this time girls received little schooling. ) ► Abigail Adams, wife of John Adams, also championed women’s interests.

Treatment of Loyalists ►Thousands of Loyalists fought with the British against the Patriots. ►Some spied on Patriots. ►Many Loyalists left American during the Revolutionary War. ►Loyalists who stayed were often shunned or victims of mob violence. ►Active Loyalists could be arrested and tried as traitors.

Hopes for Equality ► Many white Americans began questioning the act of slavery. ► Some religious groups voted to condemn slavery. ► From the beginning of the war African American soldiers fought for the American cause. ► Vermont, New Hampshire, Massachusetts, and Pennsylvania attempted to end slavery in their stated but eh issue of slavery would remain unsettled for many years.