The Adoption and Rejection of an ERP Package 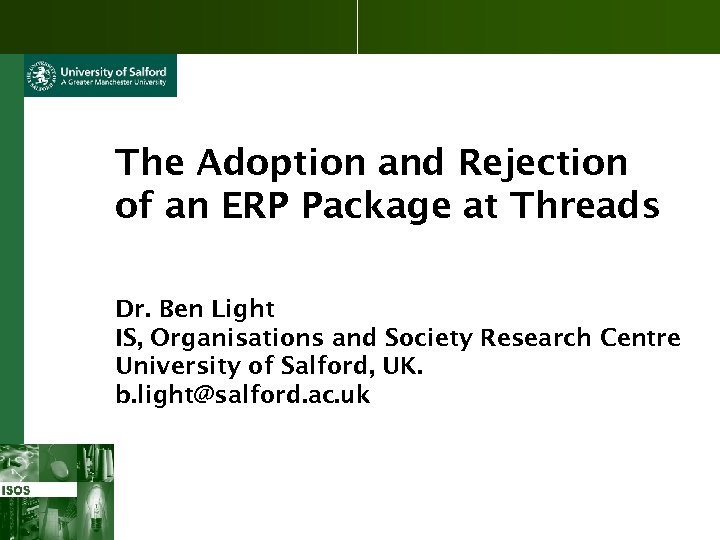 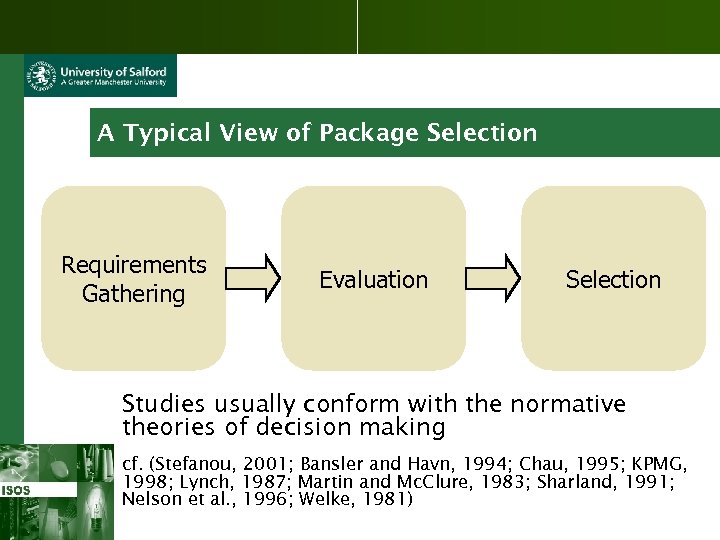 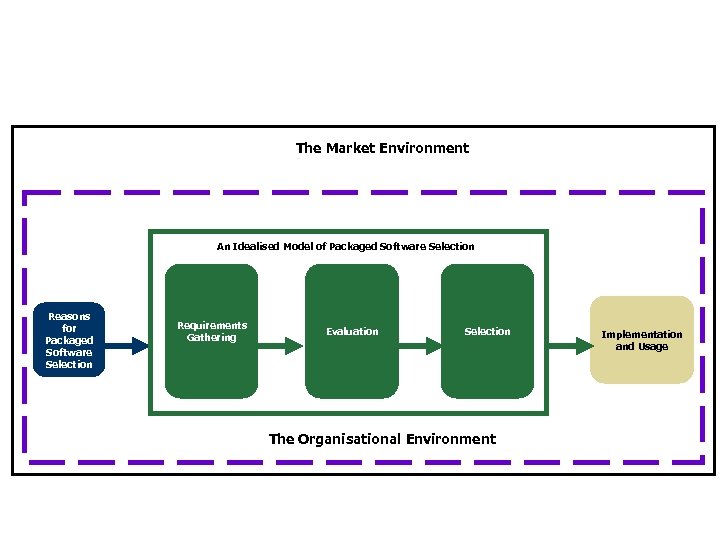 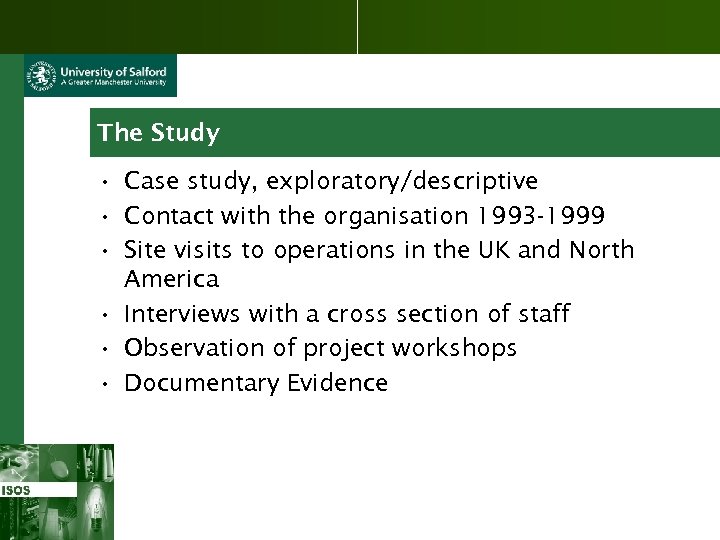 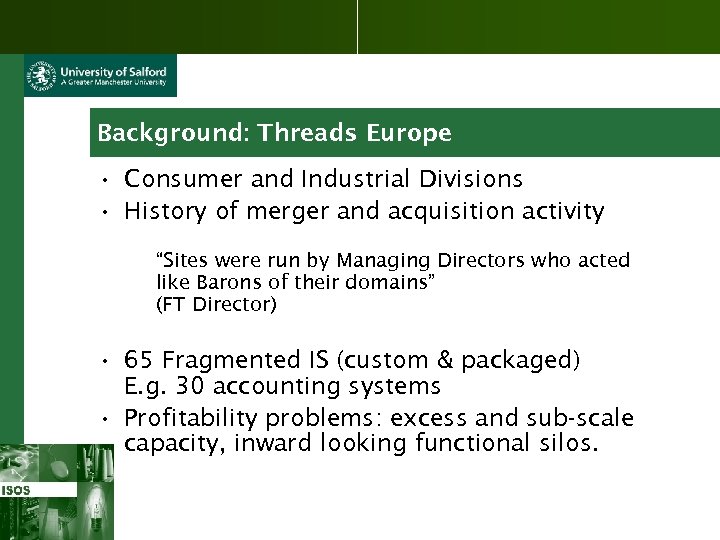 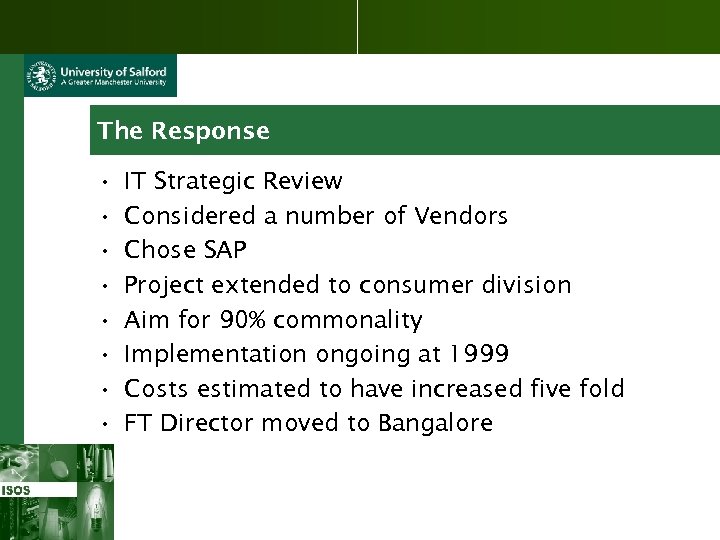 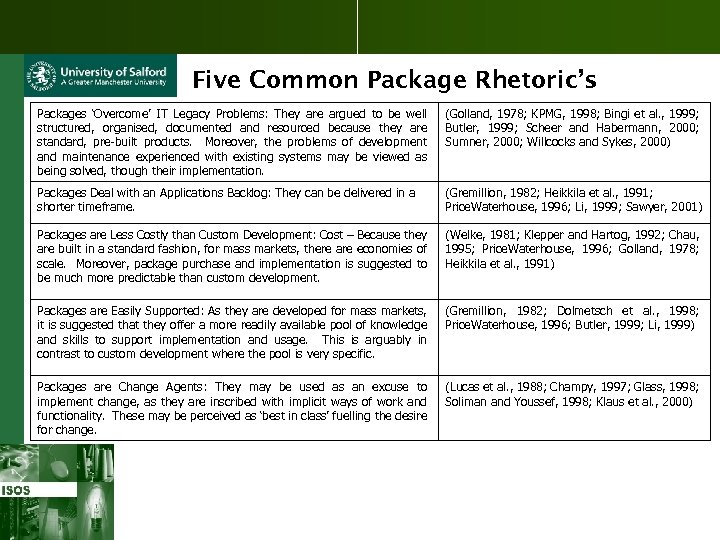 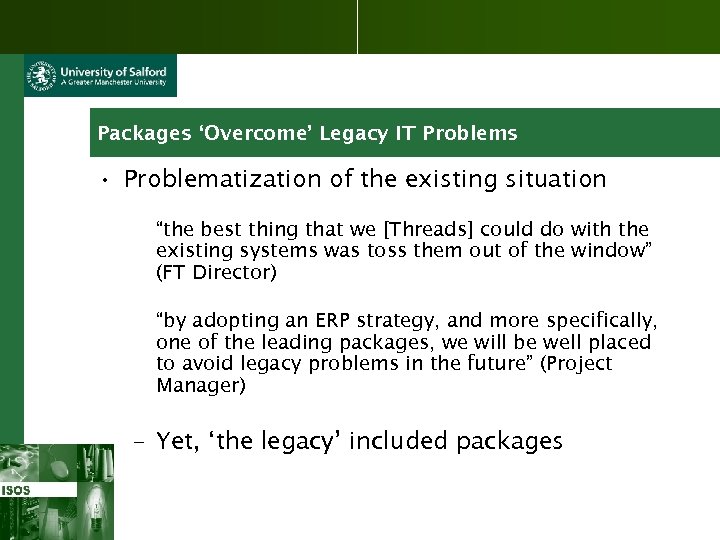 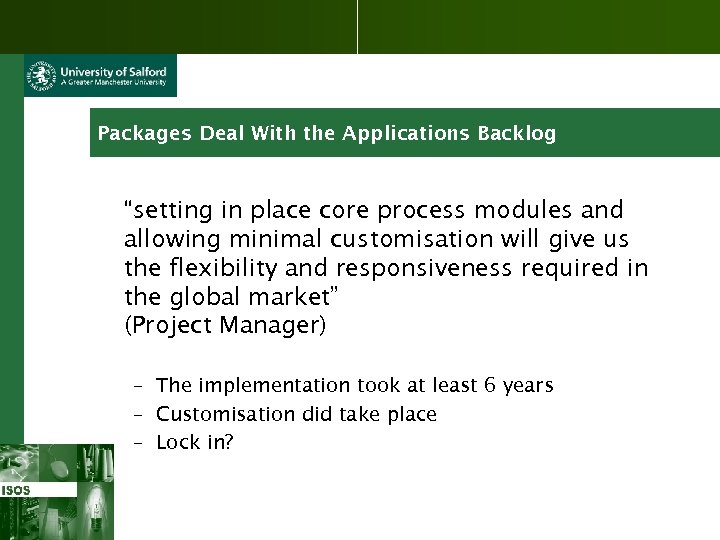 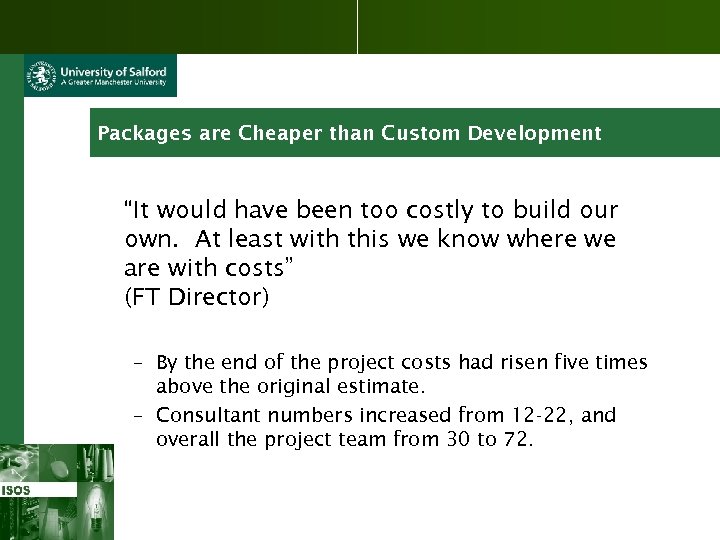 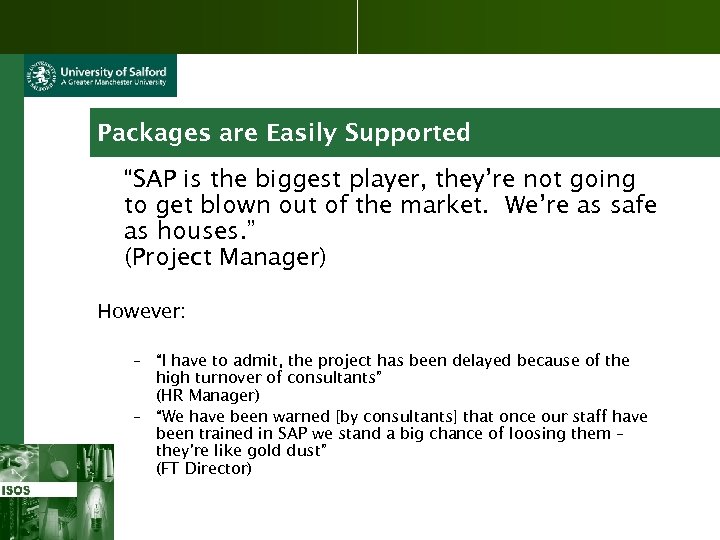 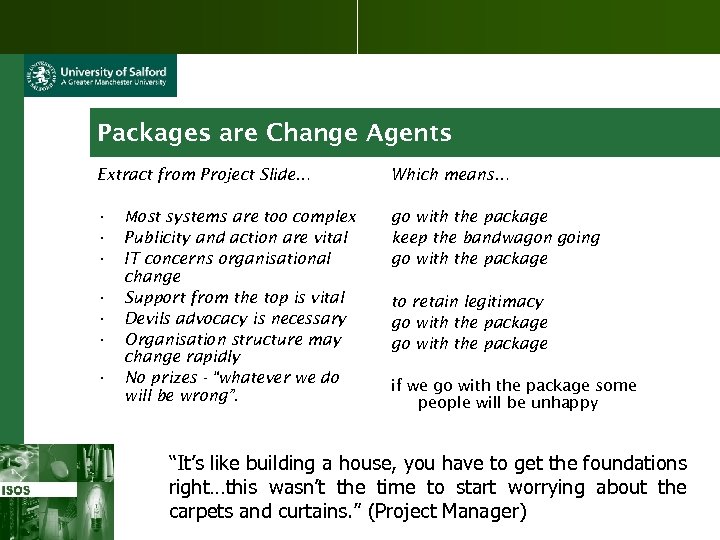 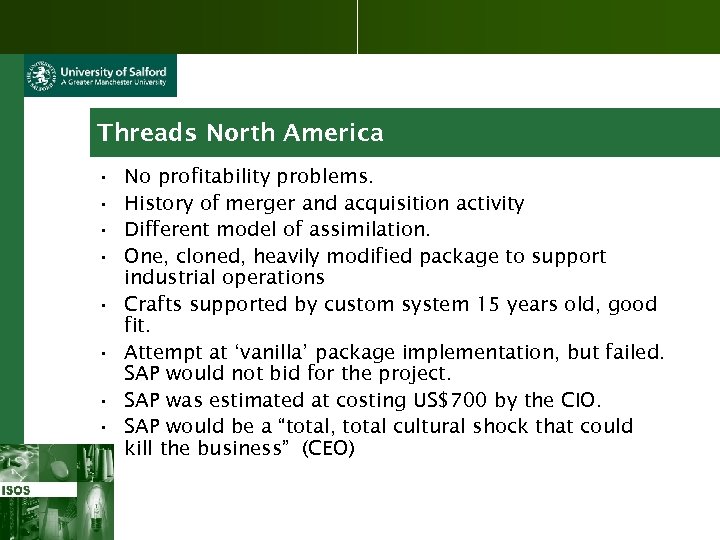 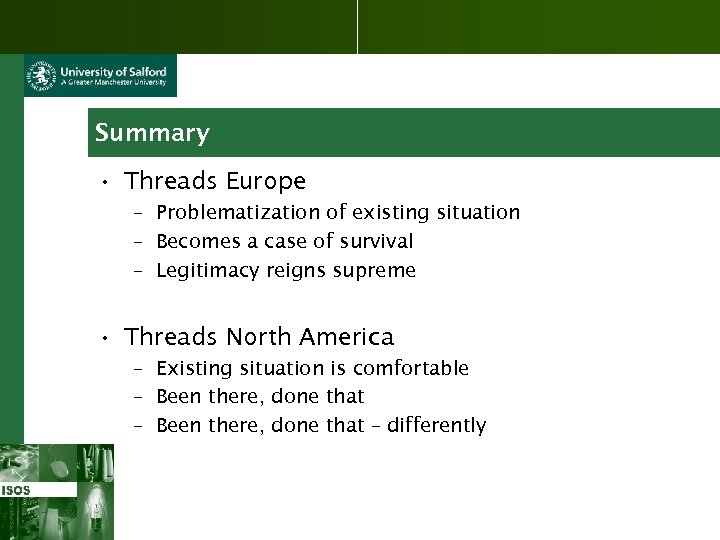 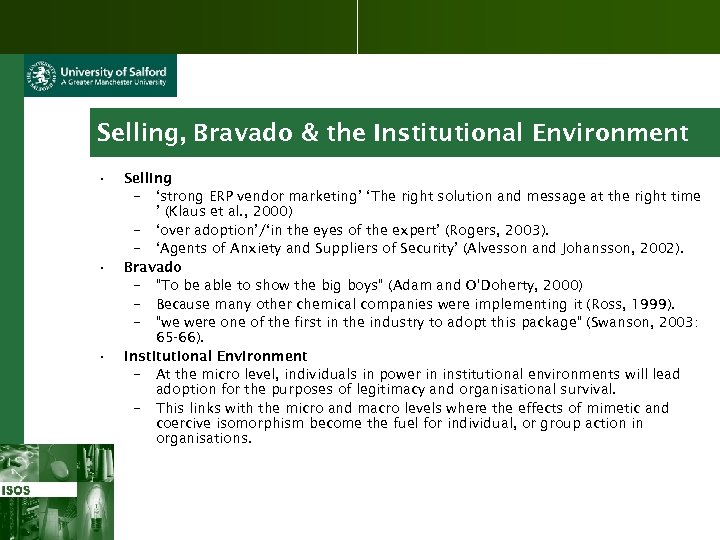 Скачать презентацию The Adoption and Rejection of an ERP Package

The Adoption and Rejection of an ERP Package at Threads Dr. Ben Light IS, Organisations and Society Research Centre University of Salford, UK. b. [email protected] ac. uk

The Study • Case study, exploratory/descriptive • Contact with the organisation 1993 -1999 • Site visits to operations in the UK and North America • Interviews with a cross section of staff • Observation of project workshops • Documentary Evidence

Five Common Package Rhetoric’s Packages ‘Overcome’ IT Legacy Problems: They are argued to be well structured, organised, documented and resourced because they are standard, pre-built products. Moreover, the problems of development and maintenance experienced with existing systems may be viewed as being solved, though their implementation. (Golland, 1978; KPMG, 1998; Bingi et al. , 1999; Butler, 1999; Scheer and Habermann, 2000; Sumner, 2000; Willcocks and Sykes, 2000) Packages Deal with an Applications Backlog: They can be delivered in a shorter timeframe. (Gremillion, 1982; Heikkila et al. , 1991; Price. Waterhouse, 1996; Li, 1999; Sawyer, 2001) Packages are Less Costly than Custom Development: Cost – Because they are built in a standard fashion, for mass markets, there are economies of scale. Moreover, package purchase and implementation is suggested to be much more predictable than custom development. (Welke, 1981; Klepper and Hartog, 1992; Chau, 1995; Price. Waterhouse, 1996; Golland, 1978; Heikkila et al. , 1991) Packages are Easily Supported: As they are developed for mass markets, it is suggested that they offer a more readily available pool of knowledge and skills to support implementation and usage. This is arguably in contrast to custom development where the pool is very specific. (Gremillion, 1982; Dolmetsch et al. , 1998; Price. Waterhouse, 1996; Butler, 1999; Li, 1999) Packages are Change Agents: They may be used as an excuse to implement change, as they are inscribed with implicit ways of work and functionality. These may be perceived as ‘best in class’ fuelling the desire for change. (Lucas et al. , 1988; Champy, 1997; Glass, 1998; Soliman and Youssef, 1998; Klaus et al. , 2000)

Packages ‘Overcome’ Legacy IT Problems • Problematization of the existing situation “the best thing that we [Threads] could do with the existing systems was toss them out of the window” (FT Director) “by adopting an ERP strategy, and more specifically, one of the leading packages, we will be well placed to avoid legacy problems in the future” (Project Manager) – Yet, ‘the legacy’ included packages

Packages Deal With the Applications Backlog “setting in place core process modules and allowing minimal customisation will give us the flexibility and responsiveness required in the global market” (Project Manager) – The implementation took at least 6 years – Customisation did take place – Lock in?

Packages are Cheaper than Custom Development “It would have been too costly to build our own. At least with this we know where we are with costs” (FT Director) – By the end of the project costs had risen five times above the original estimate. – Consultant numbers increased from 12 -22, and overall the project team from 30 to 72.

Packages are Easily Supported “SAP is the biggest player, they’re not going to get blown out of the market. We’re as safe as houses. ” (Project Manager) However: – “I have to admit, the project has been delayed because of the high turnover of consultants” (HR Manager) – “We have been warned [by consultants] that once our staff have been trained in SAP we stand a big chance of loosing them – they’re like gold dust” (FT Director)

Packages are Change Agents Extract from Project Slide… Which means… • • • go with the package keep the bandwagon going go with the package • • Most systems are too complex Publicity and action are vital IT concerns organisational change Support from the top is vital Devils advocacy is necessary Organisation structure may change rapidly No prizes - “whatever we do will be wrong”. to retain legitimacy go with the package if we go with the package some people will be unhappy “It’s like building a house, you have to get the foundations right…this wasn’t the time to start worrying about the carpets and curtains. ” (Project Manager)

Threads North America • • No profitability problems. History of merger and acquisition activity Different model of assimilation. One, cloned, heavily modified package to support industrial operations Crafts supported by custom system 15 years old, good fit. Attempt at ‘vanilla’ package implementation, but failed. SAP would not bid for the project. SAP was estimated at costing US$700 by the CIO. SAP would be a “total, total cultural shock that could kill the business” (CEO)

Selling, Bravado & the Institutional Environment • • • Selling – ‘strong ERP vendor marketing’ ‘The right solution and message at the right time ’ (Klaus et al. , 2000) – ‘over adoption’/‘in the eyes of the expert’ (Rogers, 2003). – ‘Agents of Anxiety and Suppliers of Security’ (Alvesson and Johansson, 2002). Bravado – “To be able to show the big boys” (Adam and O'Doherty, 2000) – Because many other chemical companies were implementing it (Ross, 1999). – “we were one of the first in the industry to adopt this package” (Swanson, 2003: 65 -66). Institutional Environment – At the micro level, individuals in power in institutional environments will lead adoption for the purposes of legitimacy and organisational survival. – This links with the micro and macro levels where the effects of mimetic and coercive isomorphism become the fuel for individual, or group action in organisations.