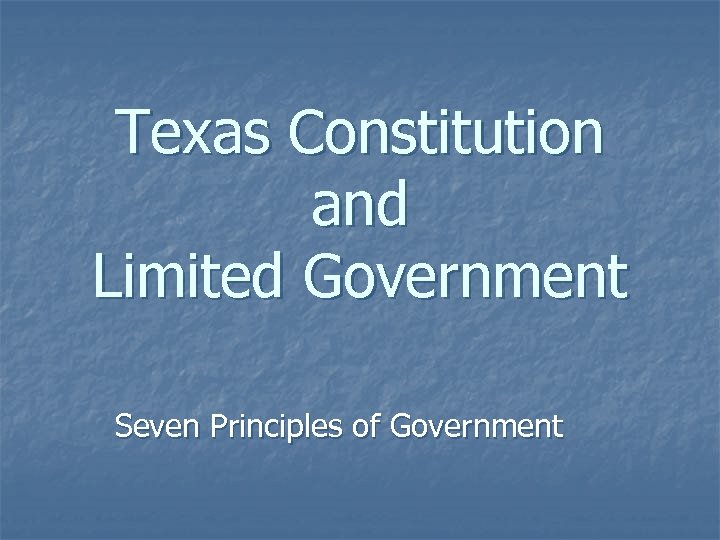 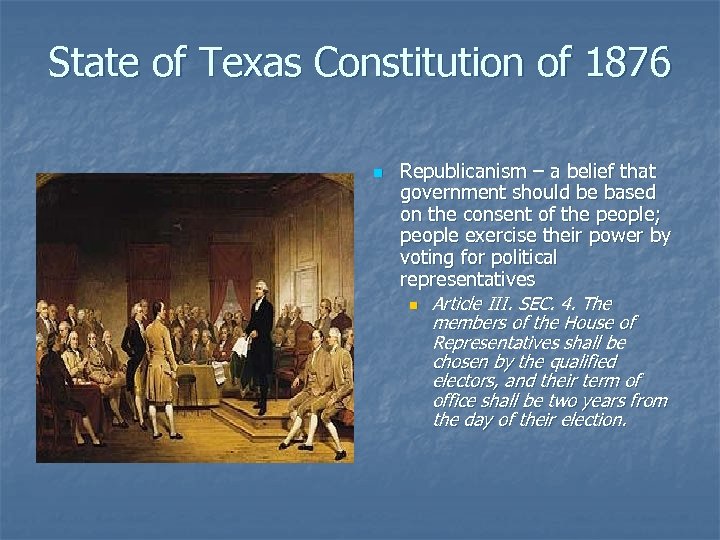 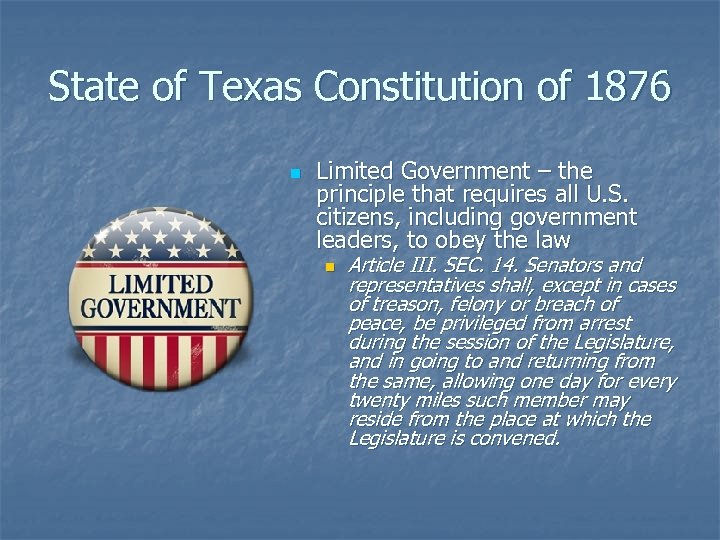 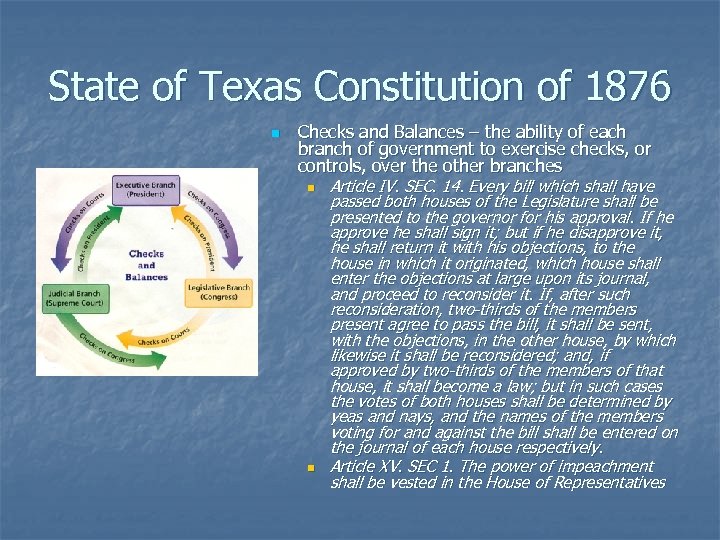 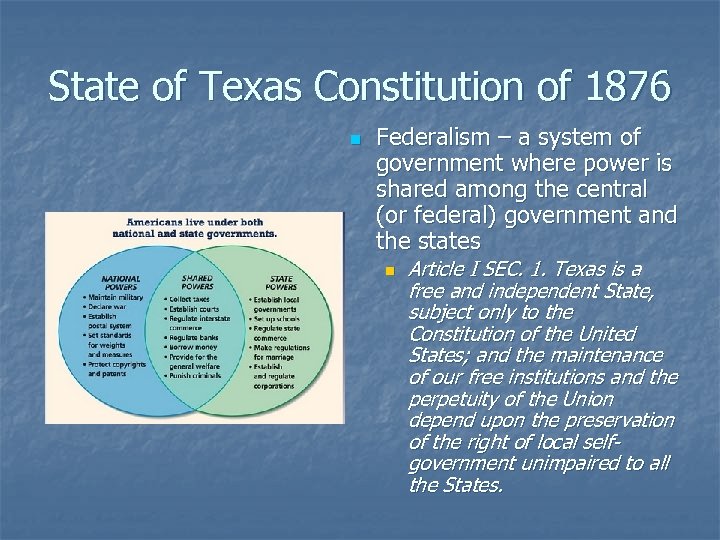 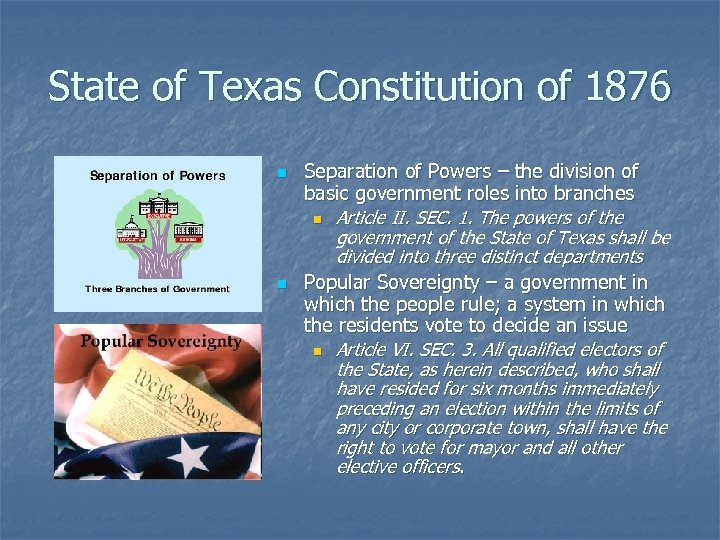 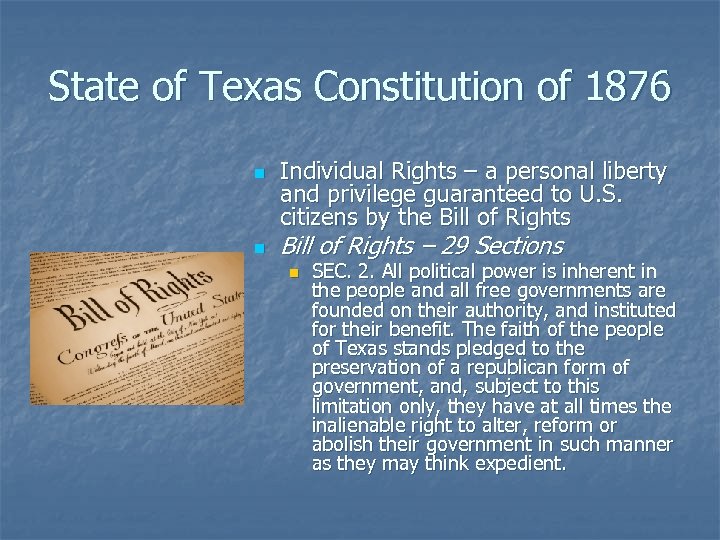 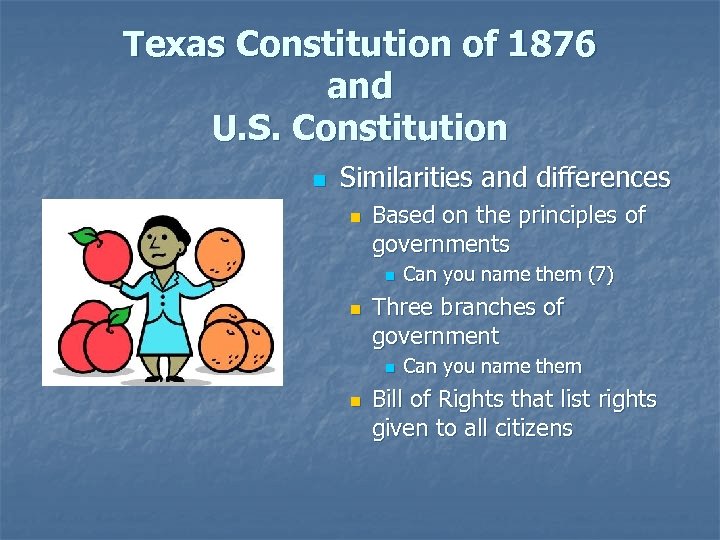 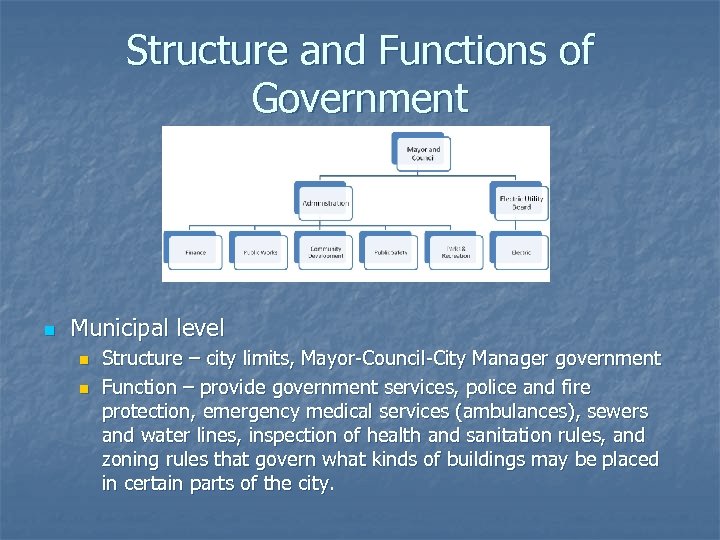 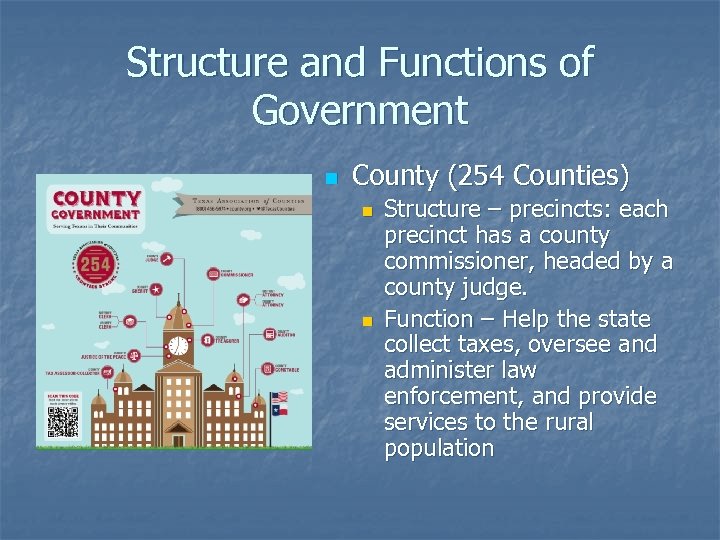 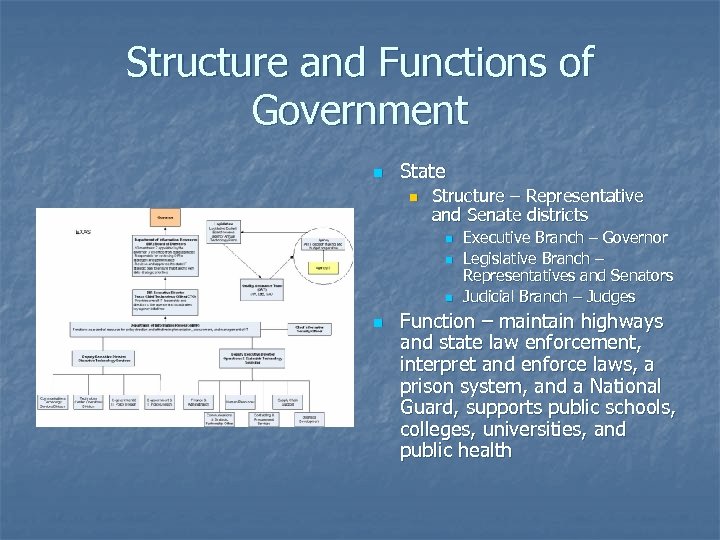 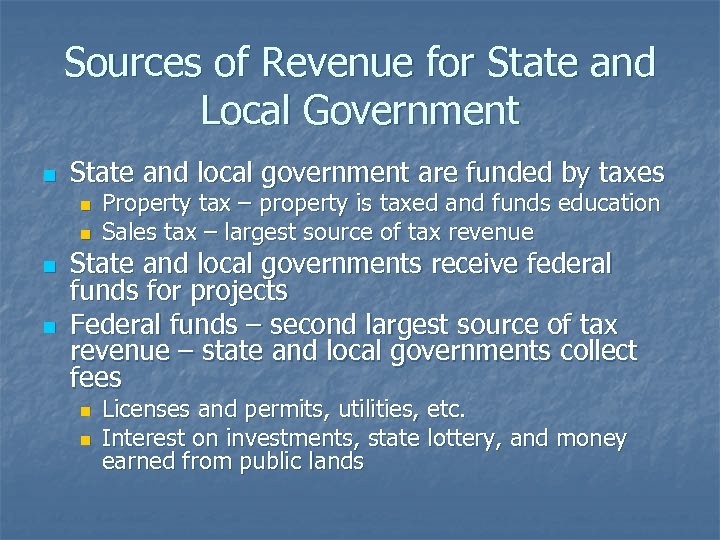 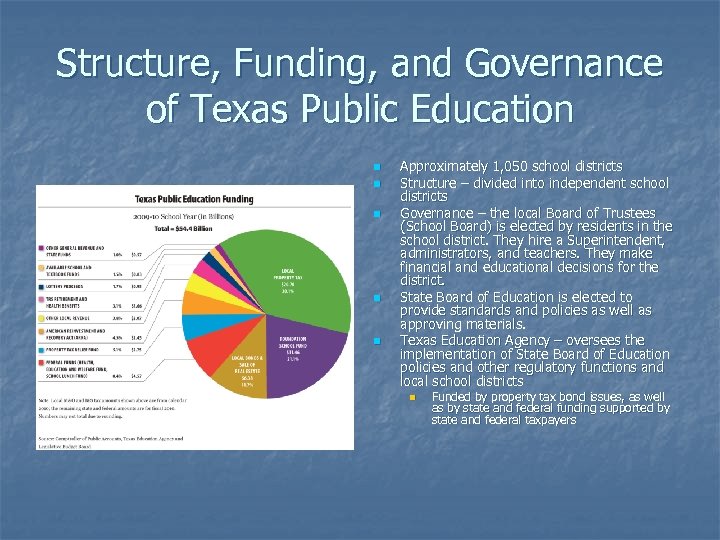 State of Texas Constitution of 1876 n Republicanism – a belief that government should be based on the consent of the people; people exercise their power by voting for political representatives n Article III. SEC. 4. The members of the House of Representatives shall be chosen by the qualified electors, and their term of office shall be two years from the day of their election.

State of Texas Constitution of 1876 n Limited Government – the principle that requires all U. S. citizens, including government leaders, to obey the law n Article III. SEC. 14. Senators and representatives shall, except in cases of treason, felony or breach of peace, be privileged from arrest during the session of the Legislature, and in going to and returning from the same, allowing one day for every twenty miles such member may reside from the place at which the Legislature is convened.

State of Texas Constitution of 1876 n Checks and Balances – the ability of each branch of government to exercise checks, or controls, over the other branches n n Article IV. SEC. 14. Every bill which shall have passed both houses of the Legislature shall be presented to the governor for his approval. If he approve he shall sign it; but if he disapprove it, he shall return it with his objections, to the house in which it originated, which house shall enter the objections at large upon its journal, and proceed to reconsider it. If, after such reconsideration, two-thirds of the members present agree to pass the bill, it shall be sent, with the objections, in the other house, by which likewise it shall be reconsidered; and, if approved by two-thirds of the members of that house, it shall become a law; but in such cases the votes of both houses shall be determined by yeas and nays, and the names of the members voting for and against the bill shall be entered on the journal of each house respectively. Article XV. SEC 1. The power of impeachment shall be vested in the House of Representatives

State of Texas Constitution of 1876 n Federalism – a system of government where power is shared among the central (or federal) government and the states n Article I SEC. 1. Texas is a free and independent State, subject only to the Constitution of the United States; and the maintenance of our free institutions and the perpetuity of the Union depend upon the preservation of the right of local selfgovernment unimpaired to all the States.

State of Texas Constitution of 1876 n n Separation of Powers – the division of basic government roles into branches n Article II. SEC. 1. The powers of the government of the State of Texas shall be divided into three distinct departments Popular Sovereignty – a government in which the people rule; a system in which the residents vote to decide an issue n Article VI. SEC. 3. All qualified electors of the State, as herein described, who shall have resided for six months immediately preceding an election within the limits of any city or corporate town, shall have the right to vote for mayor and all other elective officers.

State of Texas Constitution of 1876 n n Individual Rights – a personal liberty and privilege guaranteed to U. S. citizens by the Bill of Rights – 29 Sections n SEC. 2. All political power is inherent in the people and all free governments are founded on their authority, and instituted for their benefit. The faith of the people of Texas stands pledged to the preservation of a republican form of government, and, subject to this limitation only, they have at all times the inalienable right to alter, reform or abolish their government in such manner as they may think expedient.

Structure, Funding, and Governance of Texas Public Education n n Approximately 1, 050 school districts Structure – divided into independent school districts Governance – the local Board of Trustees (School Board) is elected by residents in the school district. They hire a Superintendent, administrators, and teachers. They make financial and educational decisions for the district. State Board of Education is elected to provide standards and policies as well as approving materials. Texas Education Agency – oversees the implementation of State Board of Education policies and other regulatory functions and local school districts n Funded by property tax bond issues, as well as by state and federal funding supported by state and federal taxpayers