Test your level of sensitivity to justice 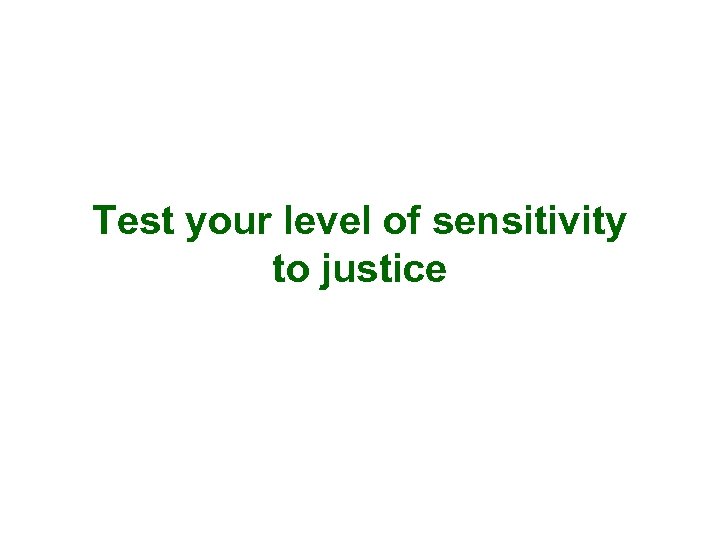 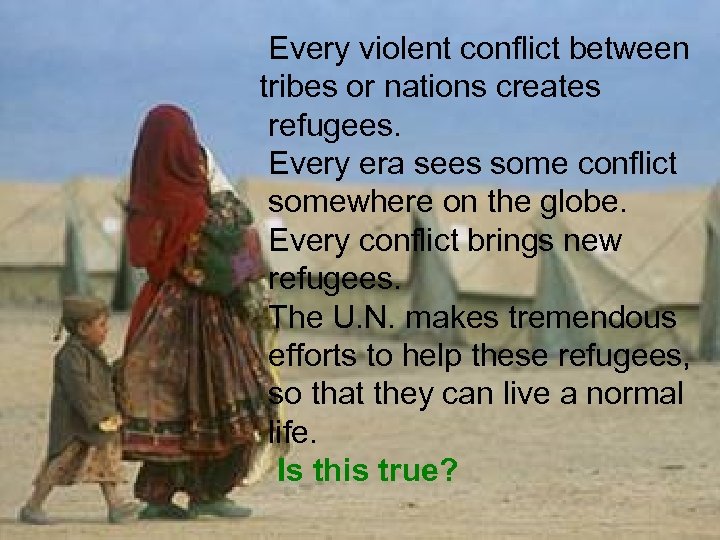 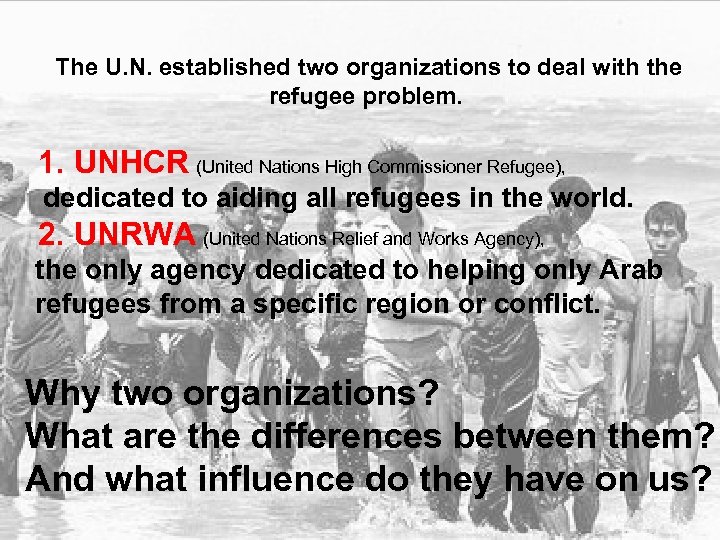 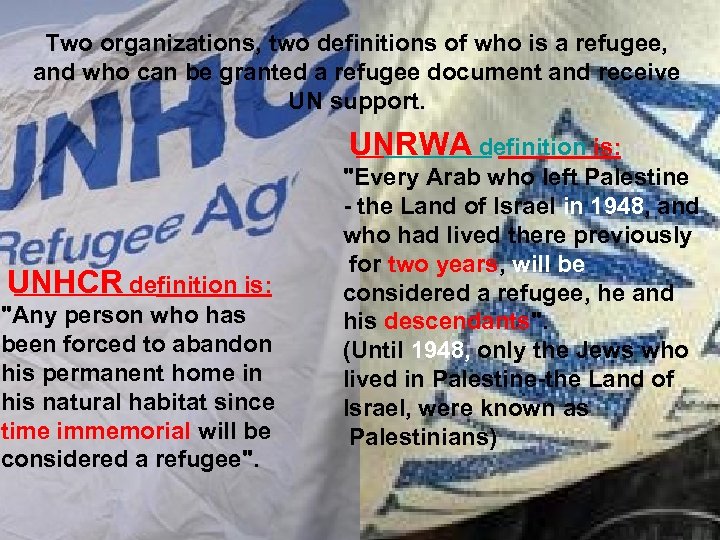 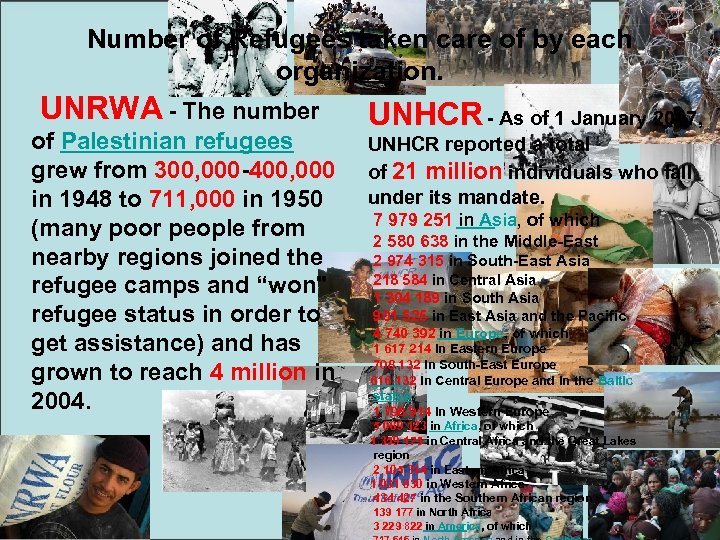 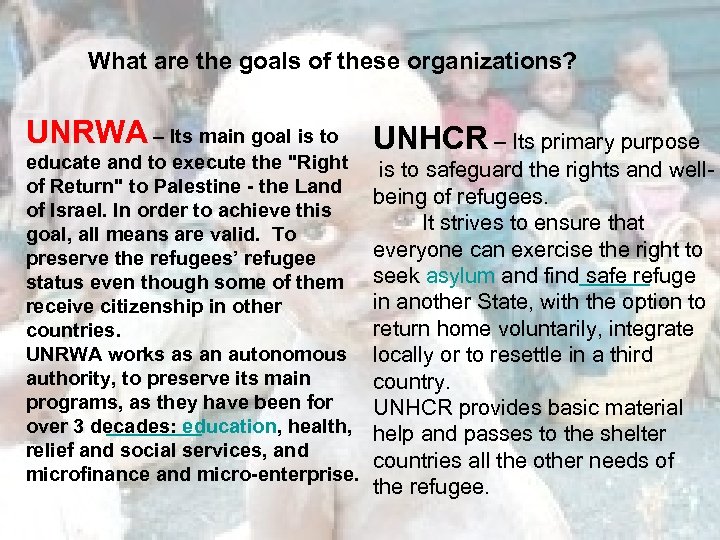 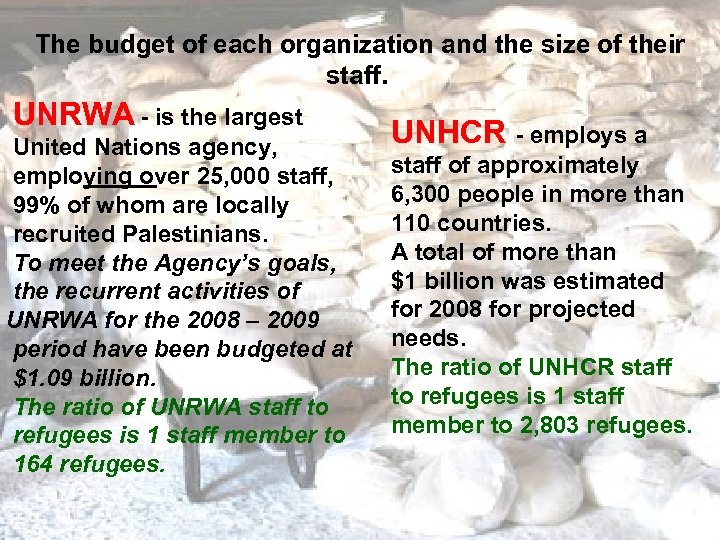 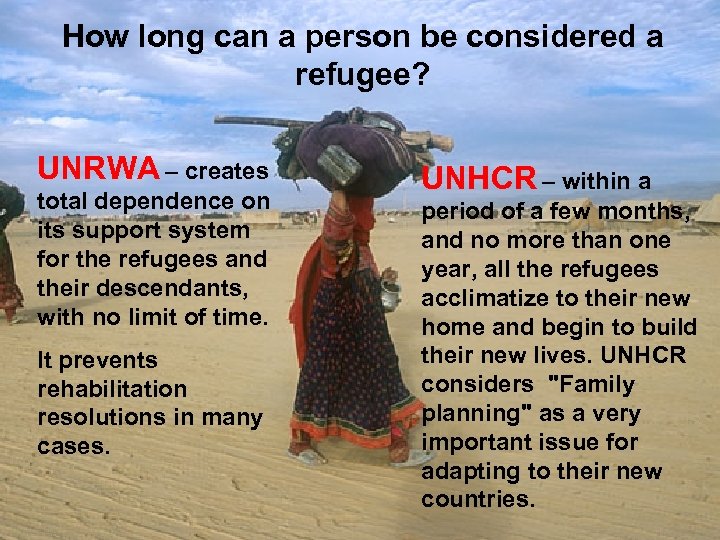 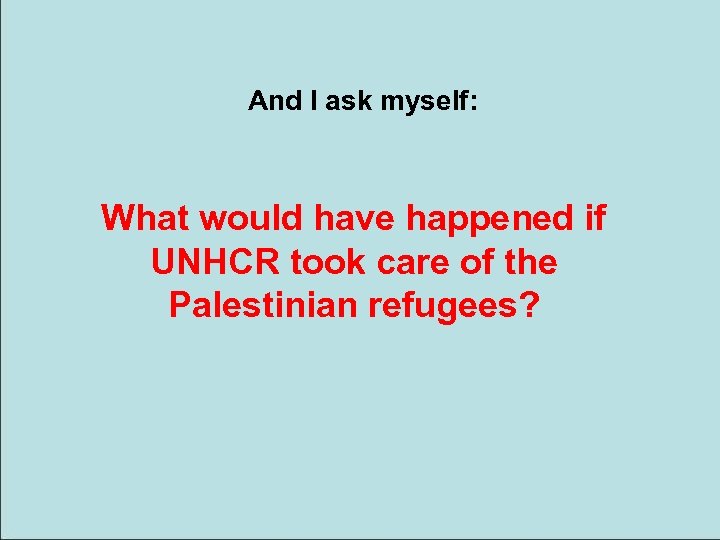 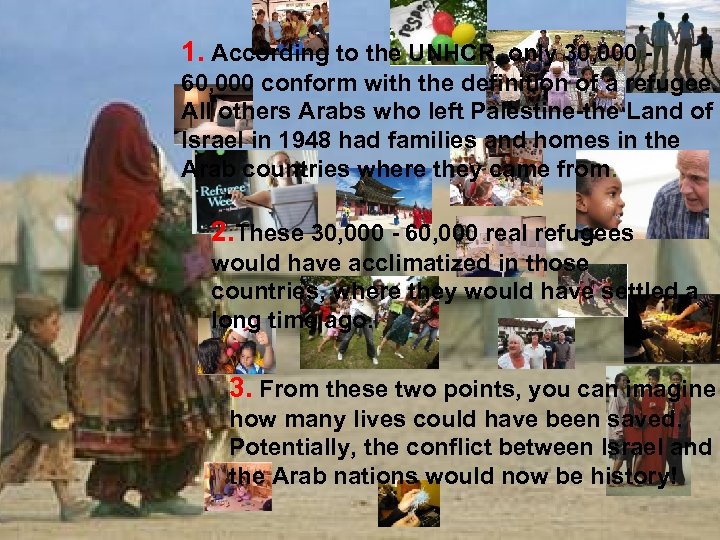 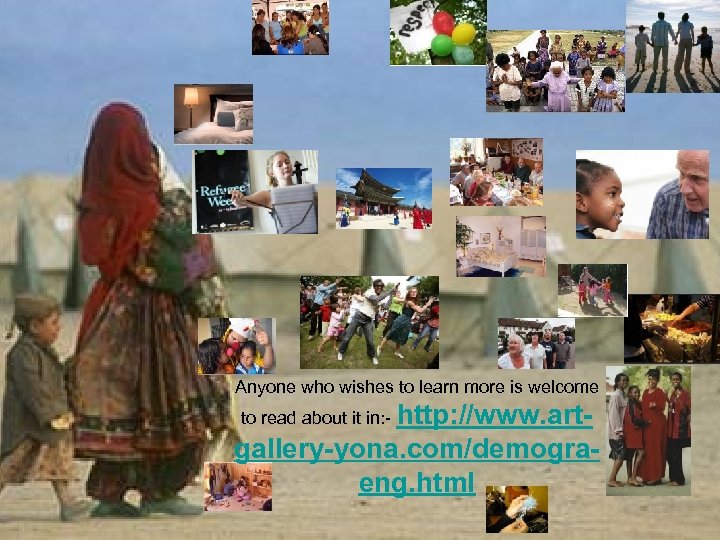 Скачать презентацию Test your level of sensitivity to justice

Test your level of sensitivity to justice

Every violent conflict between tribes or nations creates refugees. Every era sees some conflict somewhere on the globe. Every conflict brings new refugees. The U. N. makes tremendous efforts to help these refugees, so that they can live a normal life. Is this true?

The U. N. established two organizations to deal with the refugee problem. 1. UNHCR (United Nations High Commissioner Refugee), dedicated to aiding all refugees in the world. 2. UNRWA (United Nations Relief and Works Agency), the only agency dedicated to helping only Arab refugees from a specific region or conflict. Why two organizations? What are the differences between them? And what influence do they have on us?

Two organizations, two definitions of who is a refugee, and who can be granted a refugee document and receive UN support. UNRWA definition is: UNHCR definition is: "Any person who has been forced to abandon his permanent home in his natural habitat since time immemorial will be considered a refugee". "Every Arab who left Palestine - the Land of Israel in 1948, and who had lived there previously for two years, will be considered a refugee, he and his descendants". (Until 1948, only the Jews who lived in Palestine-the Land of Israel, were known as Palestinians)

What are the goals of these organizations? UNRWA – Its main goal is to educate and to execute the "Right of Return" to Palestine - the Land of Israel. In order to achieve this goal, all means are valid. To preserve the refugees’ refugee status even though some of them receive citizenship in other countries. UNRWA works as an autonomous authority, to preserve its main programs, as they have been for over 3 decades: education, health, relief and social services, and microfinance and micro-enterprise. UNHCR – Its primary purpose is to safeguard the rights and wellbeing of refugees. It strives to ensure that everyone can exercise the right to seek asylum and find safe refuge in another State, with the option to return home voluntarily, integrate locally or to resettle in a third country. UNHCR provides basic material help and passes to the shelter countries all the other needs of the refugee.

The budget of each organization and the size of their staff. UNRWA - is the largest United Nations agency, employing over 25, 000 staff, 99% of whom are locally recruited Palestinians. To meet the Agency’s goals, the recurrent activities of UNRWA for the 2008 – 2009 period have been budgeted at $1. 09 billion. The ratio of UNRWA staff to refugees is 1 staff member to 164 refugees. UNHCR - employs a staff of approximately 6, 300 people in more than 110 countries. A total of more than $1 billion was estimated for 2008 for projected needs. The ratio of UNHCR staff to refugees is 1 staff member to 2, 803 refugees.

How long can a person be considered a refugee? UNRWA – creates total dependence on its support system for the refugees and their descendants, with no limit of time. It prevents rehabilitation resolutions in many cases. UNHCR – within a period of a few months, and no more than one year, all the refugees acclimatize to their new home and begin to build their new lives. UNHCR considers "Family planning" as a very important issue for adapting to their new countries.

And I ask myself: What would have happened if UNHCR took care of the Palestinian refugees?

1. According to the UNHCR, only 30, 000 60, 000 conform with the definition of a refugee. All others Arabs who left Palestine-the Land of Israel in 1948 had families and homes in the Arab countries where they came from. 2. These 30, 000 - 60, 000 real refugees would have acclimatized in those countries, where they would have settled a long time ago. 3. From these two points, you can imagine how many lives could have been saved. Potentially, the conflict between Israel and the Arab nations would now be history!

Anyone who wishes to learn more is welcome to read about it in: - http: //www. art- gallery-yona. com/demograeng. html