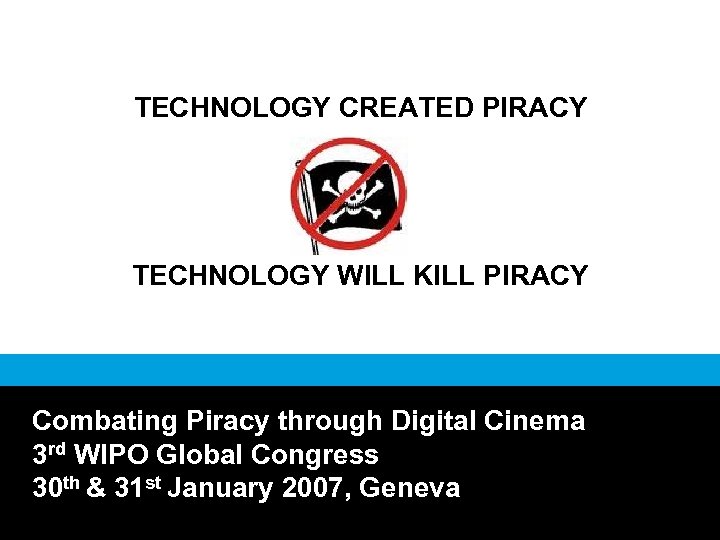 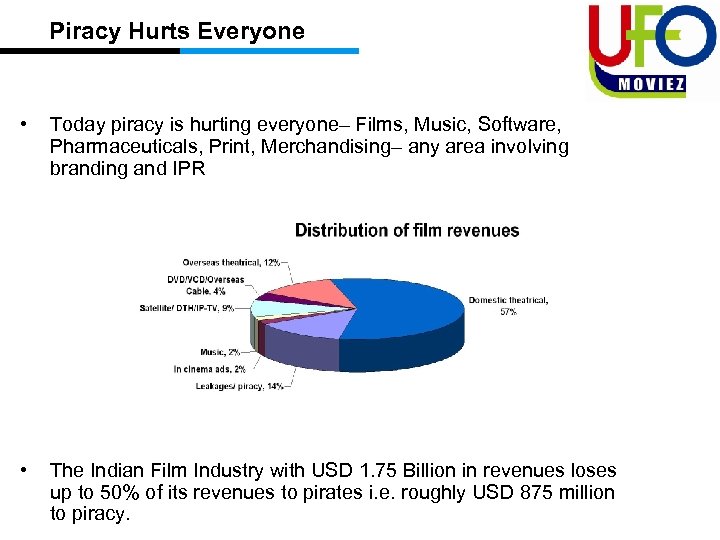 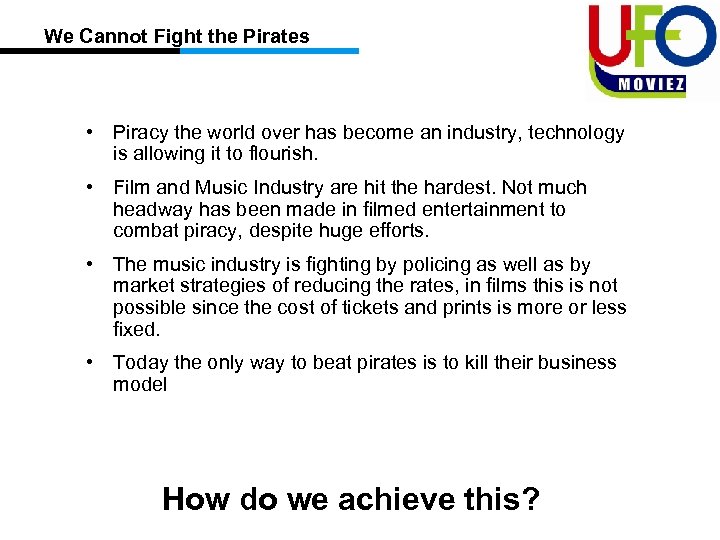 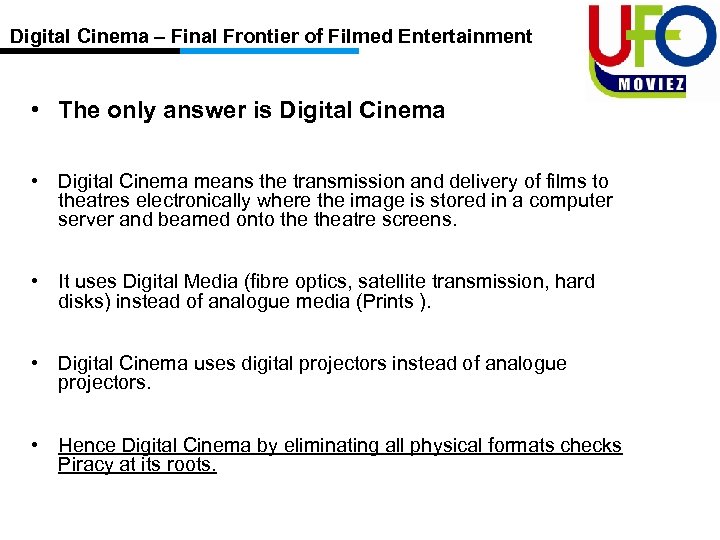 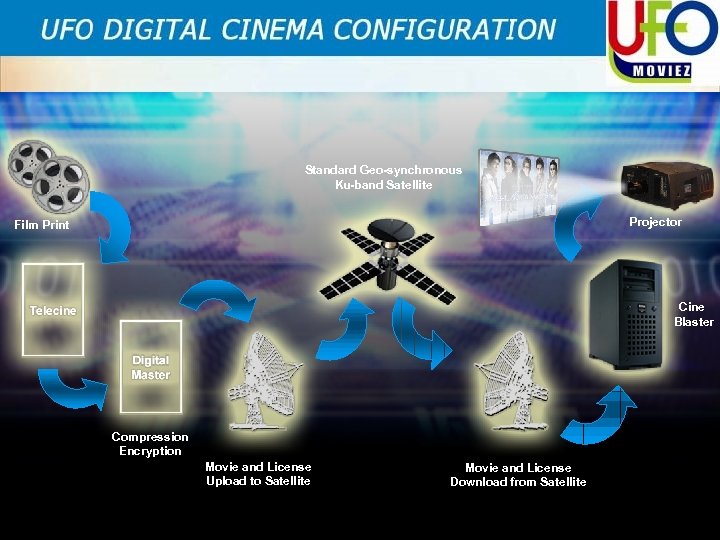 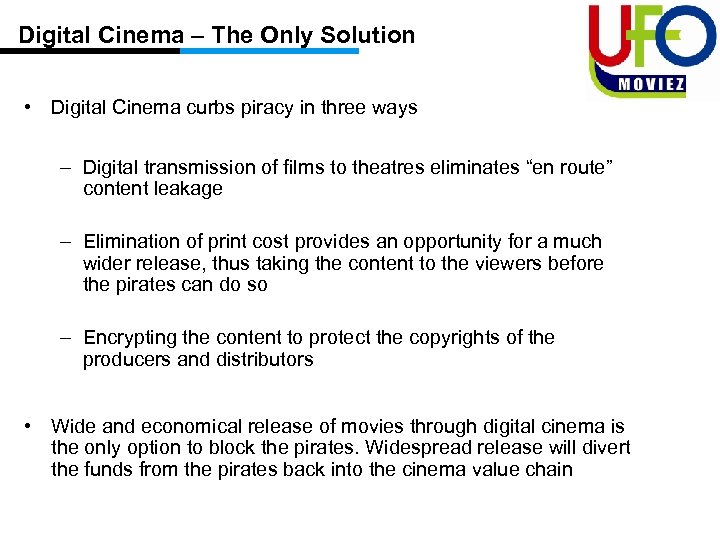 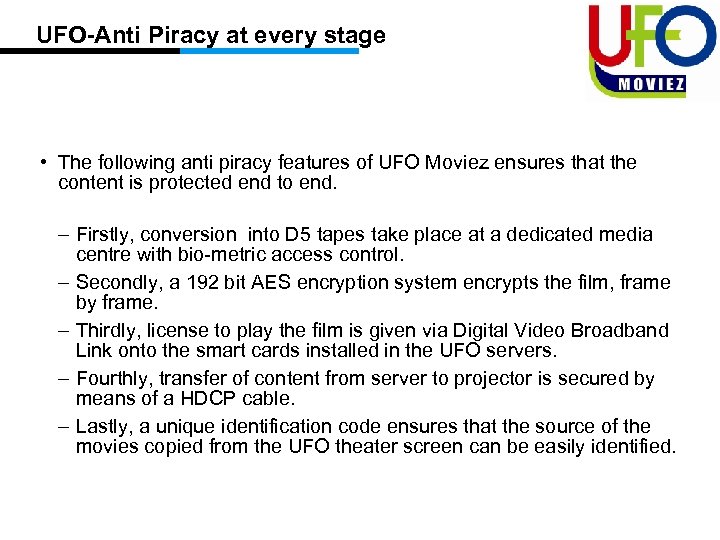 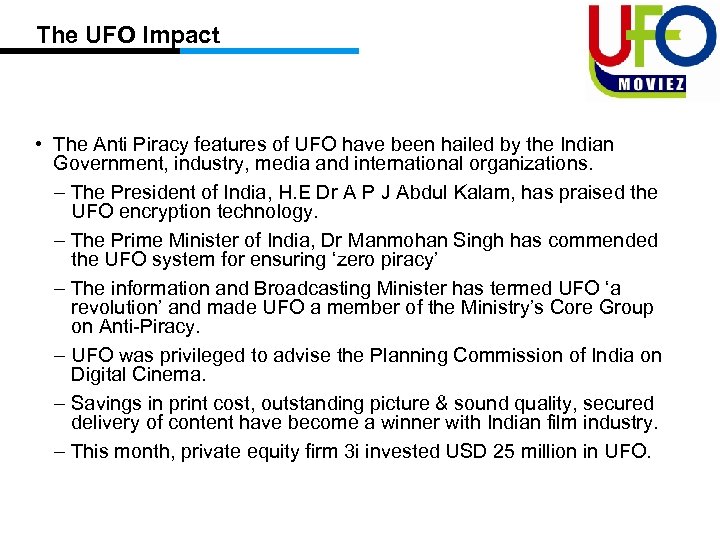 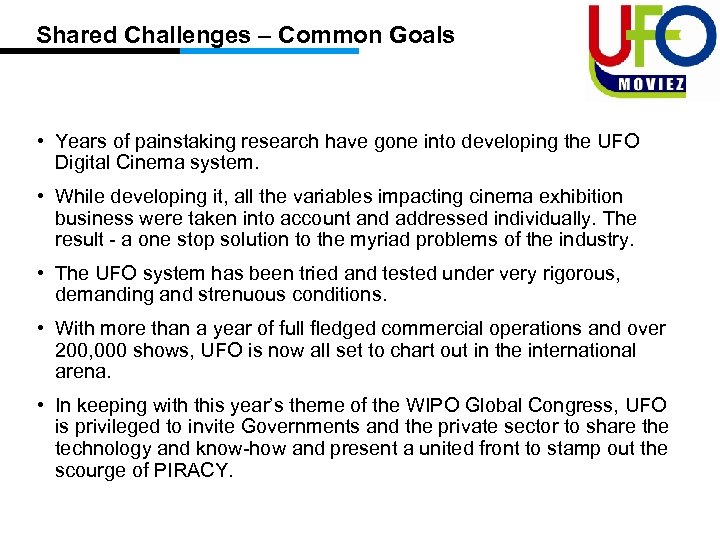 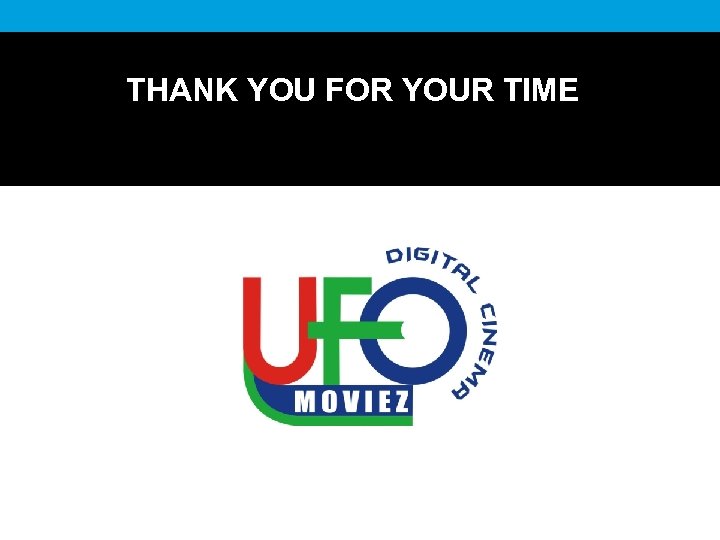 Piracy Hurts Everyone • Today piracy is hurting everyone– Films, Music, Software, Pharmaceuticals, Print, Merchandising– any area involving branding and IPR • The Indian Film Industry with USD 1. 75 Billion in revenues loses up to 50% of its revenues to pirates i. e. roughly USD 875 million to piracy.

Indian Cinema – The Present Scenario • Cinema distribution and exhibition business in India carried out almost entirely on celluloid format which leaves it vulnerable to piracy. • Advancement in duplication technology has made piracy easy, cost effective, speedy and difficult to prevent. • The only present safeguard against piracy is to physically guard the prints and stringent legal enforcement. Both measures, due to logistical reasons, are difficult to implement. • However, piracy is essentially a technology problem which has to be combated with technology.

We Cannot Fight the Pirates • Piracy the world over has become an industry, technology is allowing it to flourish. • Film and Music Industry are hit the hardest. Not much headway has been made in filmed entertainment to combat piracy, despite huge efforts. • The music industry is fighting by policing as well as by market strategies of reducing the rates, in films this is not possible since the cost of tickets and prints is more or less fixed. • Today the only way to beat pirates is to kill their business model How do we achieve this?

Digital Cinema – The Only Solution • Digital Cinema curbs piracy in three ways – Digital transmission of films to theatres eliminates “en route” content leakage – Elimination of print cost provides an opportunity for a much wider release, thus taking the content to the viewers before the pirates can do so – Encrypting the content to protect the copyrights of the producers and distributors • Wide and economical release of movies through digital cinema is the only option to block the pirates. Widespread release will divert the funds from the pirates back into the cinema value chain

UFO-Anti Piracy at every stage • The following anti piracy features of UFO Moviez ensures that the content is protected end to end. – Firstly, conversion into D 5 tapes take place at a dedicated media centre with bio-metric access control. – Secondly, a 192 bit AES encryption system encrypts the film, frame by frame. – Thirdly, license to play the film is given via Digital Video Broadband Link onto the smart cards installed in the UFO servers. – Fourthly, transfer of content from server to projector is secured by means of a HDCP cable. – Lastly, a unique identification code ensures that the source of the movies copied from the UFO theater screen can be easily identified.

The UFO Impact • The Anti Piracy features of UFO have been hailed by the Indian Government, industry, media and international organizations. – The President of India, H. E Dr A P J Abdul Kalam, has praised the UFO encryption technology. – The Prime Minister of India, Dr Manmohan Singh has commended the UFO system for ensuring ‘zero piracy’ – The information and Broadcasting Minister has termed UFO ‘a revolution’ and made UFO a member of the Ministry’s Core Group on Anti-Piracy. – UFO was privileged to advise the Planning Commission of India on Digital Cinema. – Savings in print cost, outstanding picture & sound quality, secured delivery of content have become a winner with Indian film industry. – This month, private equity firm 3 i invested USD 25 million in UFO.

UFO Moviez – A background • UFO Moviez is a wholly owned subsidiary of the $ 1 billion Apollo Group, a leading business house of India. • UFO systems are installed at over 600 theatres in India including major multiplexes. This makes UFO the largest networked digital cinema chain in the world. • Since November 2005, over 225 movies aggregating to more than 200, 000 shows have been played on UFO. • UFO is the only company in the world to deliver MPEG-4 high definition content directly into theatres via satellite. • UFO theatres have improved their occupancies by an average of 120%. • UFO is now all set to roll out internationally in UAE, Europe, Singapore, Malaysia, Indonesia, Mauritius and at other places.

Shared Challenges – Common Goals • Years of painstaking research have gone into developing the UFO Digital Cinema system. • While developing it, all the variables impacting cinema exhibition business were taken into account and addressed individually. The result - a one stop solution to the myriad problems of the industry. • The UFO system has been tried and tested under very rigorous, demanding and strenuous conditions. • With more than a year of full fledged commercial operations and over 200, 000 shows, UFO is now all set to chart out in the international arena. • In keeping with this year’s theme of the WIPO Global Congress, UFO is privileged to invite Governments and the private sector to share the technology and know-how and present a united front to stamp out the scourge of PIRACY.

THANK YOU FOR YOUR TIME