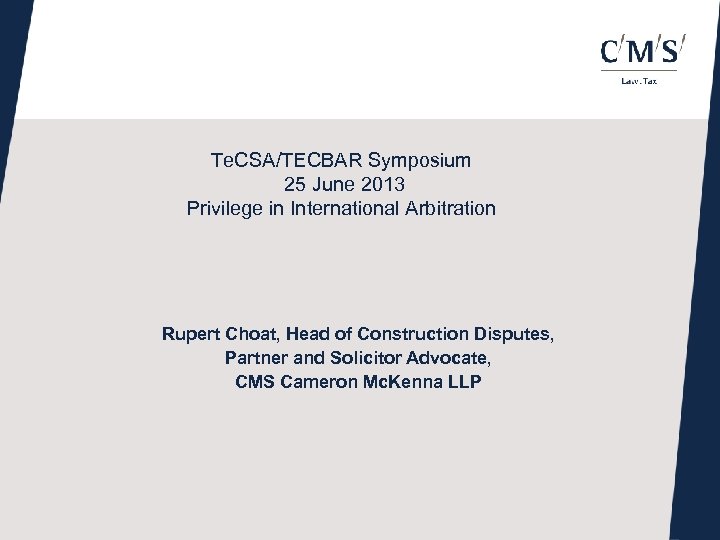 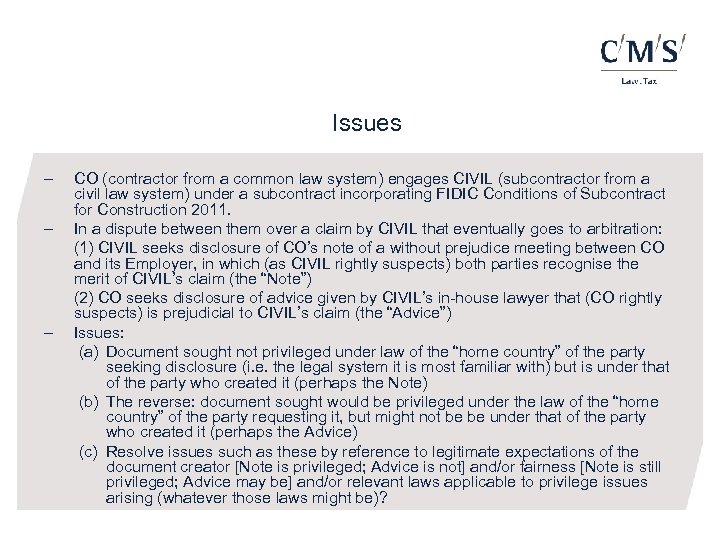 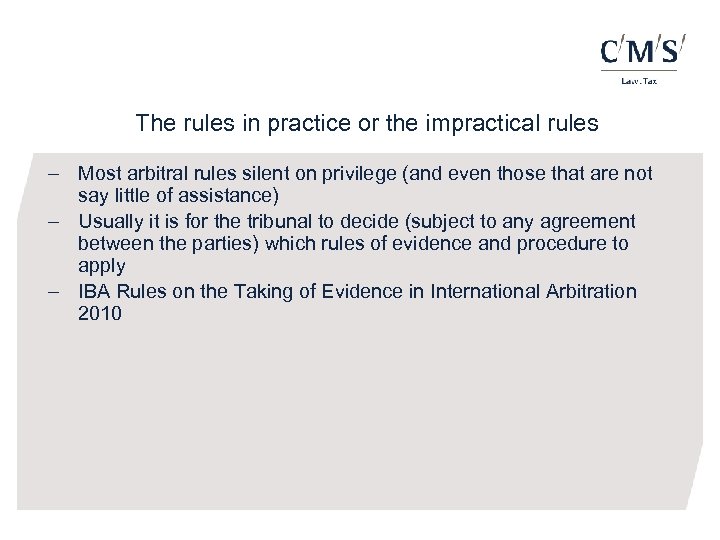 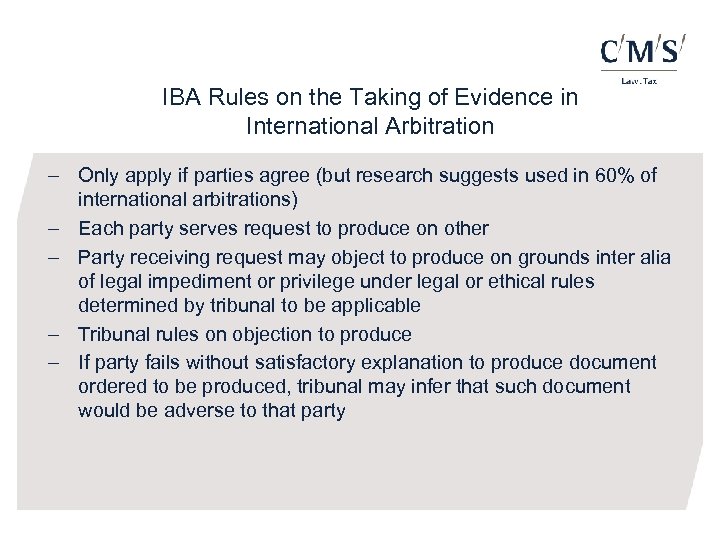 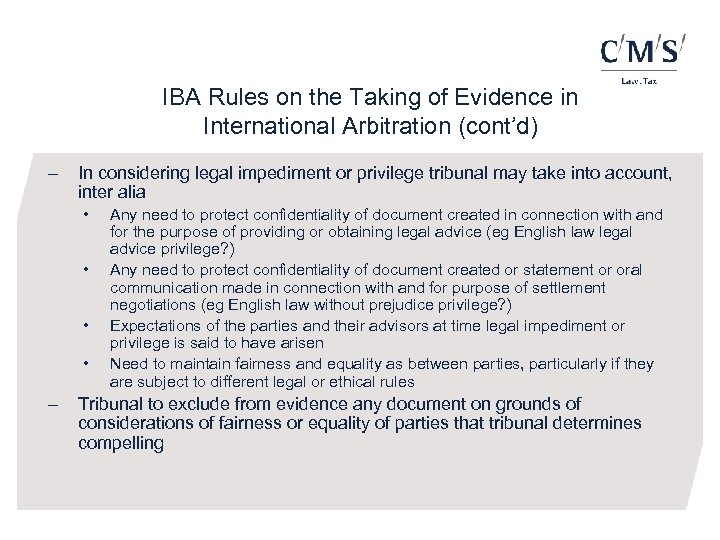 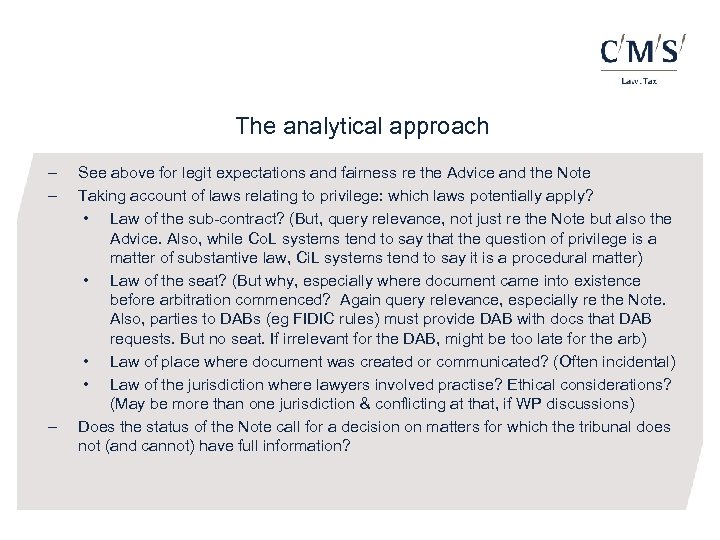 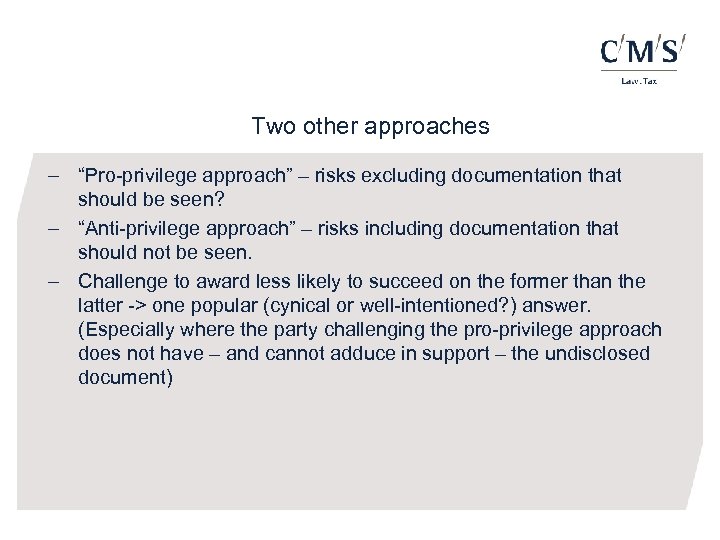 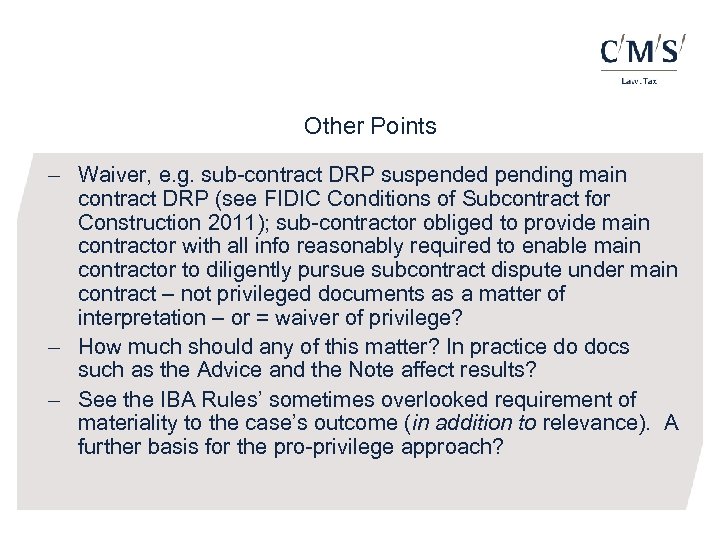 Issues - - CO (contractor from a common law system) engages CIVIL (subcontractor from a civil law system) under a subcontract incorporating FIDIC Conditions of Subcontract for Construction 2011. In a dispute between them over a claim by CIVIL that eventually goes to arbitration: (1) CIVIL seeks disclosure of CO’s note of a without prejudice meeting between CO and its Employer, in which (as CIVIL rightly suspects) both parties recognise the merit of CIVIL’s claim (the “Note”) (2) CO seeks disclosure of advice given by CIVIL’s in-house lawyer that (CO rightly suspects) is prejudicial to CIVIL’s claim (the “Advice”) Issues: (a) Document sought not privileged under law of the “home country” of the party seeking disclosure (i. e. the legal system it is most familiar with) but is under that of the party who created it (perhaps the Note) (b) The reverse: document sought would be privileged under the law of the “home country” of the party requesting it, but might not be be under that of the party who created it (perhaps the Advice) (c) Resolve issues such as these by reference to legitimate expectations of the document creator [Note is privileged; Advice is not] and/or fairness [Note is still privileged; Advice may be] and/or relevant laws applicable to privilege issues arising (whatever those laws might be)?

IBA Rules on the Taking of Evidence in International Arbitration - Only apply if parties agree (but research suggests used in 60% of international arbitrations) - Each party serves request to produce on other - Party receiving request may object to produce on grounds inter alia of legal impediment or privilege under legal or ethical rules determined by tribunal to be applicable - Tribunal rules on objection to produce - If party fails without satisfactory explanation to produce document ordered to be produced, tribunal may infer that such document would be adverse to that party

IBA Rules on the Taking of Evidence in International Arbitration (cont’d) - In considering legal impediment or privilege tribunal may take into account, inter alia • • - Any need to protect confidentiality of document created in connection with and for the purpose of providing or obtaining legal advice (eg English law legal advice privilege? ) Any need to protect confidentiality of document created or statement or oral communication made in connection with and for purpose of settlement negotiations (eg English law without prejudice privilege? ) Expectations of the parties and their advisors at time legal impediment or privilege is said to have arisen Need to maintain fairness and equality as between parties, particularly if they are subject to different legal or ethical rules Tribunal to exclude from evidence any document on grounds of considerations of fairness or equality of parties that tribunal determines compelling

The analytical approach - - See above for legit expectations and fairness re the Advice and the Note Taking account of laws relating to privilege: which laws potentially apply? • Law of the sub-contract? (But, query relevance, not just re the Note but also the Advice. Also, while Co. L systems tend to say that the question of privilege is a matter of substantive law, Ci. L systems tend to say it is a procedural matter) • Law of the seat? (But why, especially where document came into existence before arbitration commenced? Again query relevance, especially re the Note. Also, parties to DABs (eg FIDIC rules) must provide DAB with docs that DAB requests. But no seat. If irrelevant for the DAB, might be too late for the arb) • Law of place where document was created or communicated? (Often incidental) • Law of the jurisdiction where lawyers involved practise? Ethical considerations? (May be more than one jurisdiction & conflicting at that, if WP discussions) Does the status of the Note call for a decision on matters for which the tribunal does not (and cannot) have full information?

Other Points - Waiver, e. g. sub-contract DRP suspended pending main contract DRP (see FIDIC Conditions of Subcontract for Construction 2011); sub-contractor obliged to provide main contractor with all info reasonably required to enable main contractor to diligently pursue subcontract dispute under main contract – not privileged documents as a matter of interpretation – or = waiver of privilege? - How much should any of this matter? In practice do docs such as the Advice and the Note affect results? - See the IBA Rules’ sometimes overlooked requirement of materiality to the case’s outcome (in addition to relevance). A further basis for the pro-privilege approach?