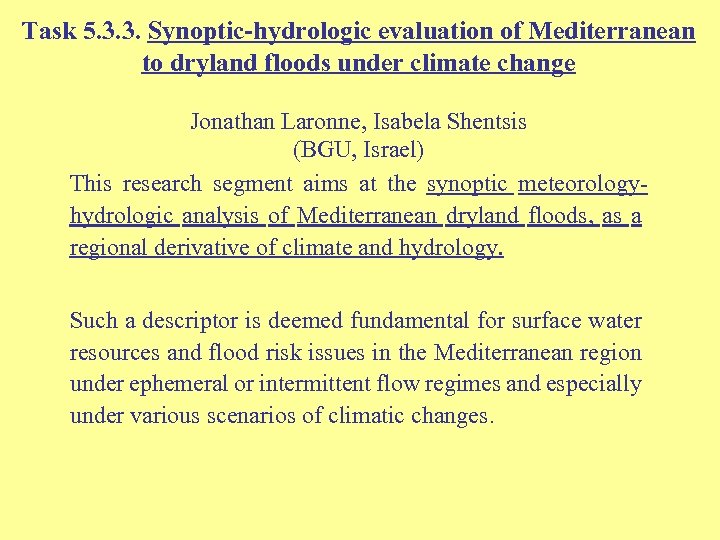 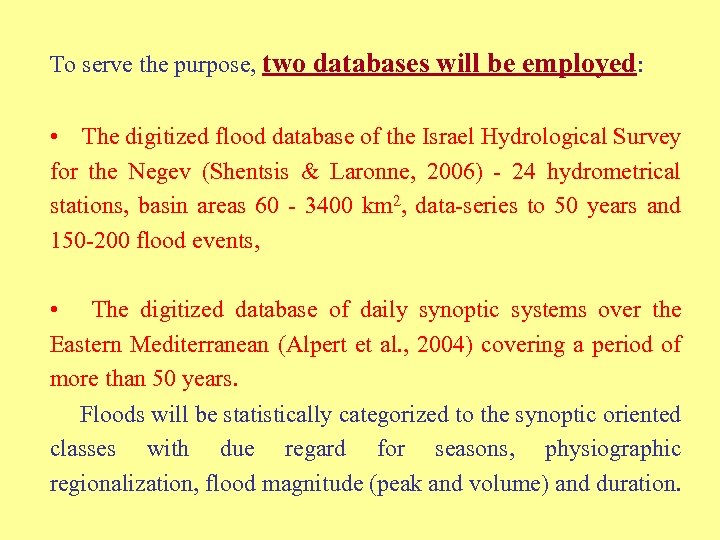 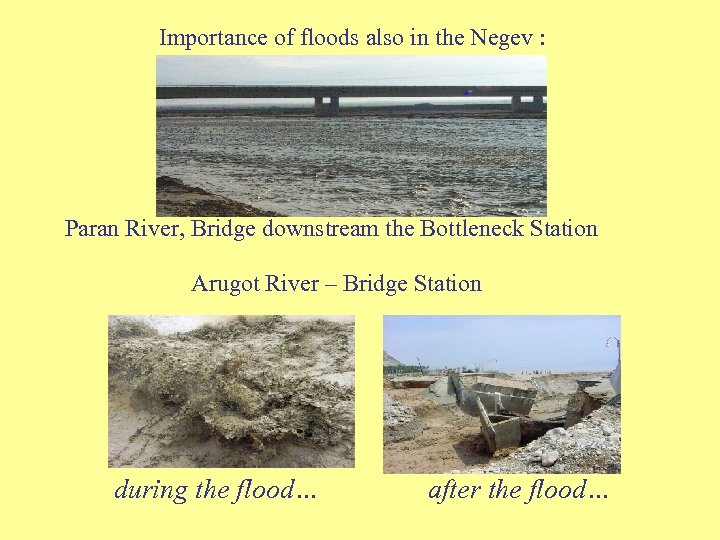 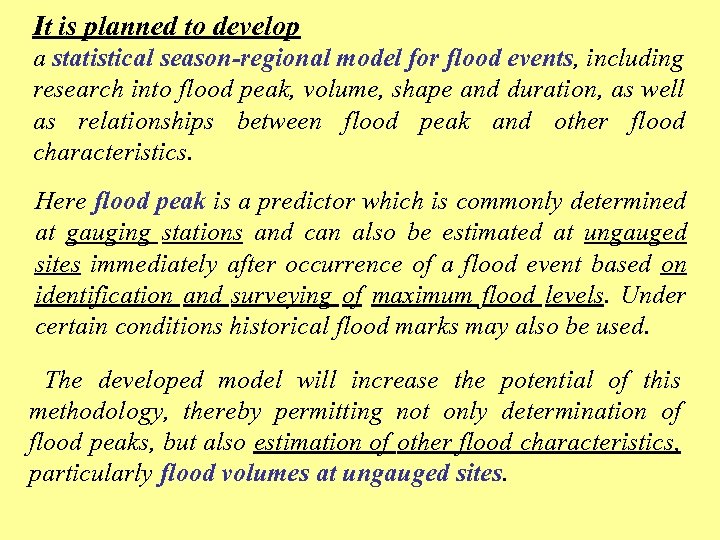 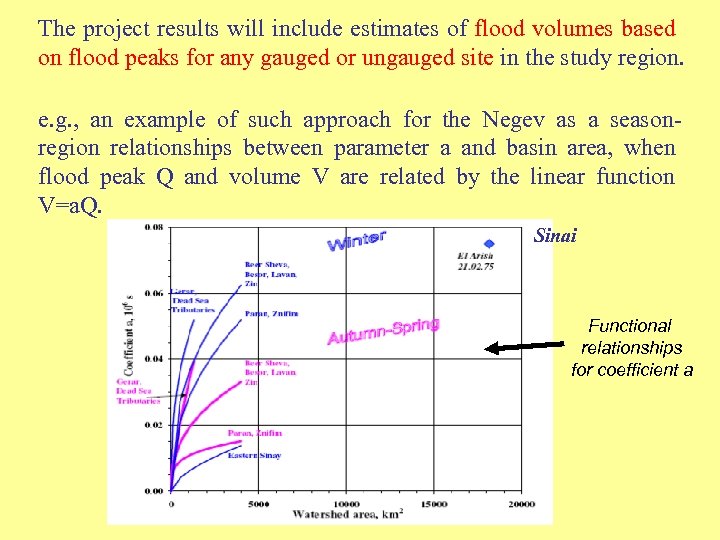 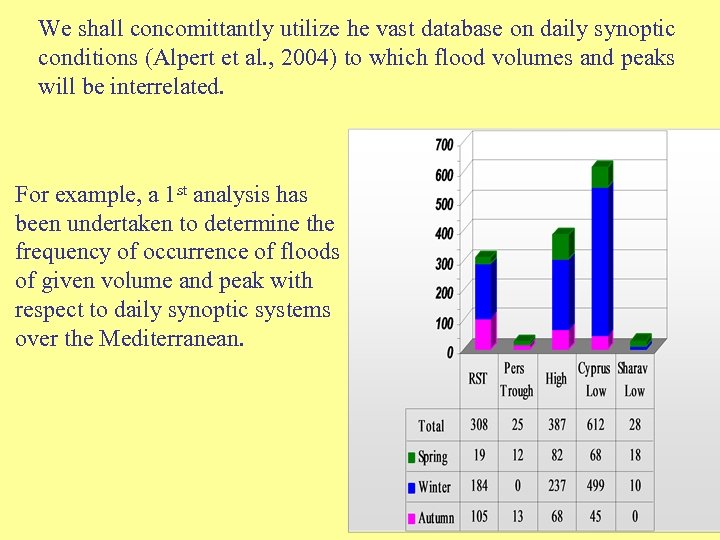 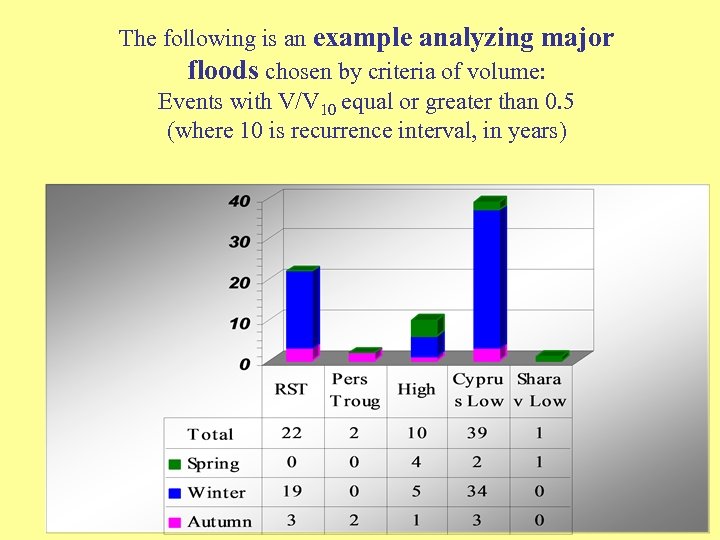 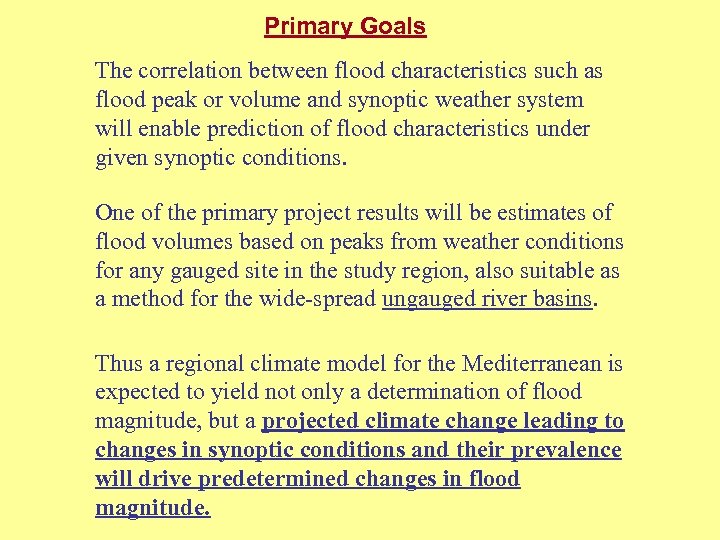 Task 5. 3. 3. Synoptic-hydrologic evaluation of Mediterranean to dryland floods under climate change Jonathan Laronne, Isabela Shentsis (BGU, Israel) This research segment aims at the synoptic meteorologyhydrologic analysis of Mediterranean dryland floods, as a regional derivative of climate and hydrology. Such a descriptor is deemed fundamental for surface water resources and flood risk issues in the Mediterranean region under ephemeral or intermittent flow regimes and especially under various scenarios of climatic changes.

To serve the purpose, two databases will be employed: • The digitized flood database of the Israel Hydrological Survey for the Negev (Shentsis & Laronne, 2006) - 24 hydrometrical stations, basin areas 60 - 3400 km 2, data-series to 50 years and 150 -200 flood events, • The digitized database of daily synoptic systems over the Eastern Mediterranean (Alpert et al. , 2004) covering a period of more than 50 years. Floods will be statistically categorized to the synoptic oriented classes with due regard for seasons, physiographic regionalization, flood magnitude (peak and volume) and duration.

Rivers and stations network in the Negev BGU

Importance of floods also in the Negev : Paran River, Bridge downstream the Bottleneck Station Arugot River – Bridge Station during the flood… after the flood…

It is planned to develop a statistical season-regional model for flood events, including research into flood peak, volume, shape and duration, as well as relationships between flood peak and other flood characteristics. Here flood peak is a predictor which is commonly determined at gauging stations and can also be estimated at ungauged sites immediately after occurrence of a flood event based on identification and surveying of maximum flood levels. Under certain conditions historical flood marks may also be used. The developed model will increase the potential of this methodology, thereby permitting not only determination of flood peaks, but also estimation of other flood characteristics, particularly flood volumes at ungauged sites.

The project results will include estimates of flood volumes based on flood peaks for any gauged or ungauged site in the study region. e. g. , an example of such approach for the Negev as a seasonregion relationships between parameter a and basin area, when flood peak Q and volume V are related by the linear function V=a. Q. Sinai Functional relationships for coefficient a

We shall concomittantly utilize he vast database on daily synoptic conditions (Alpert et al. , 2004) to which flood volumes and peaks will be interrelated. For example, a 1 st analysis has been undertaken to determine the frequency of occurrence of floods of given volume and peak with respect to daily synoptic systems over the Mediterranean.

The following is an example analyzing major floods chosen by criteria of volume: Events with V/V 10 equal or greater than 0. 5 (where 10 is recurrence interval, in years)

Primary Goals The correlation between flood characteristics such as flood peak or volume and synoptic weather system will enable prediction of flood characteristics under given synoptic conditions. One of the primary project results will be estimates of flood volumes based on peaks from weather conditions for any gauged site in the study region, also suitable as a method for the wide-spread ungauged river basins. Thus a regional climate model for the Mediterranean is expected to yield not only a determination of flood magnitude, but a projected climate change leading to changes in synoptic conditions and their prevalence will drive predetermined changes in flood magnitude.