Systematic Theology III The Doctrine of the Church 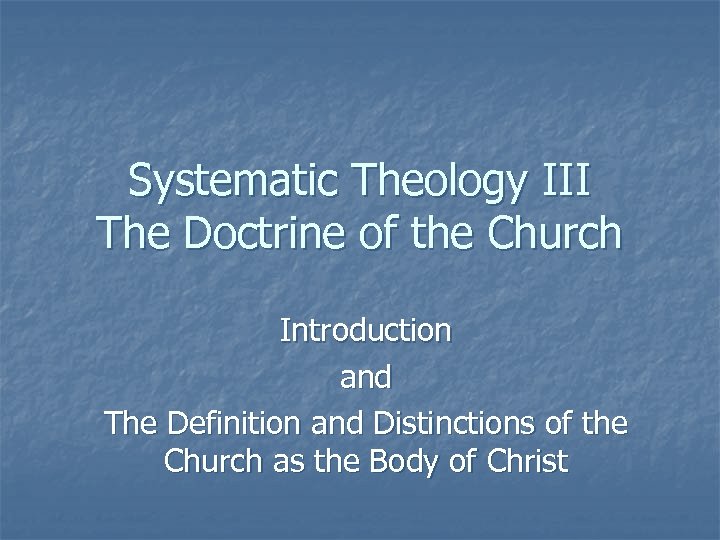 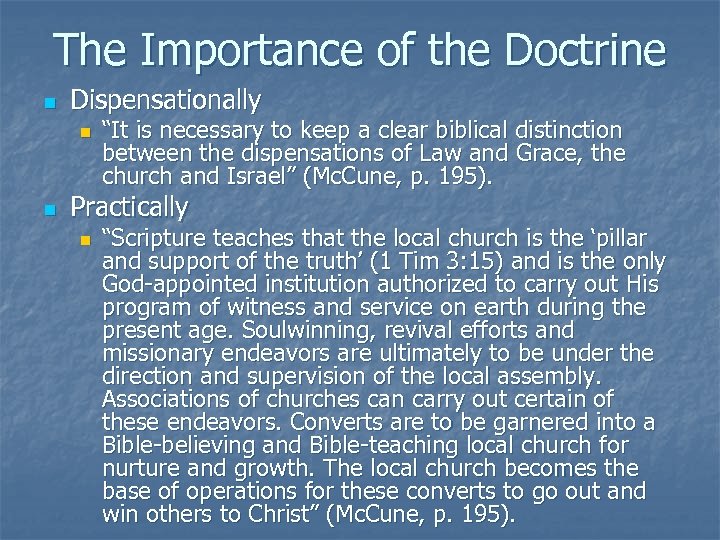 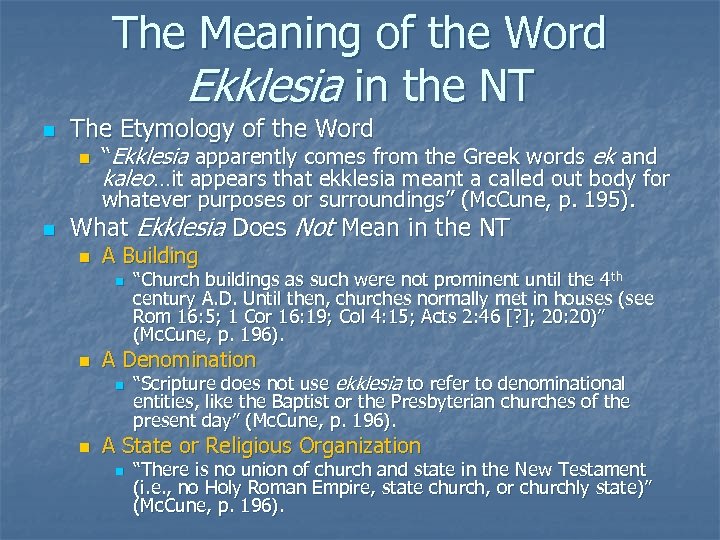 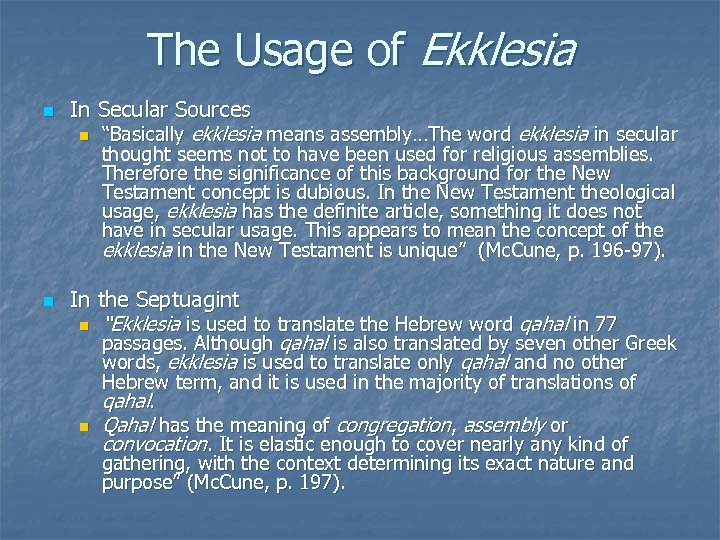 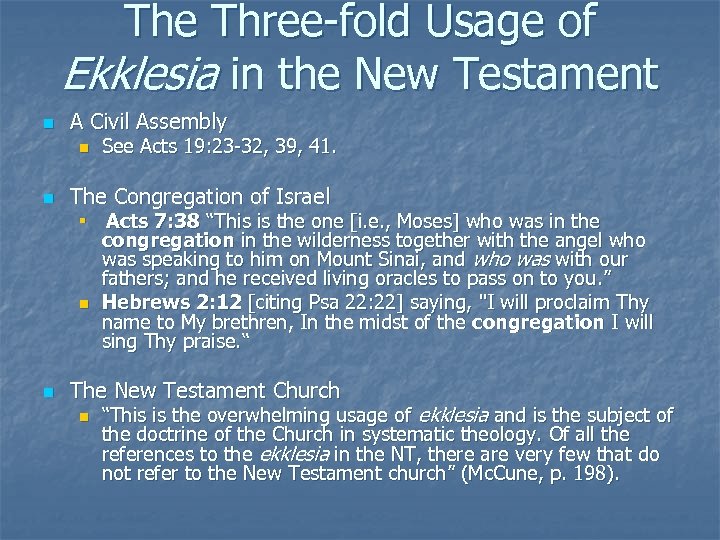 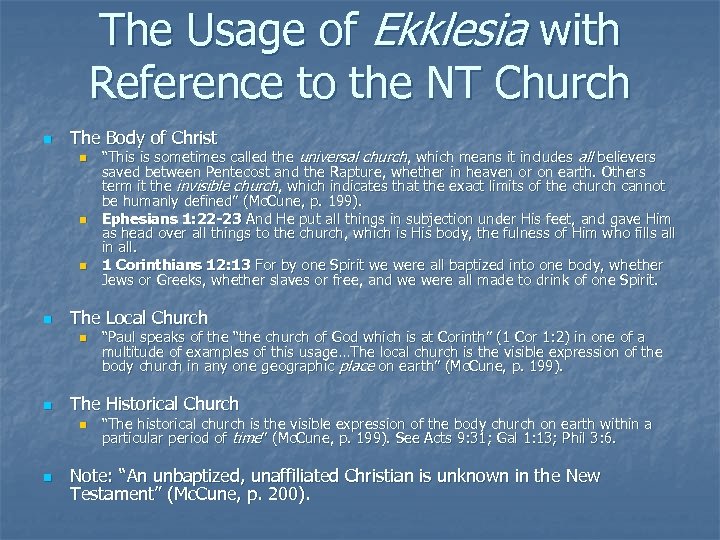 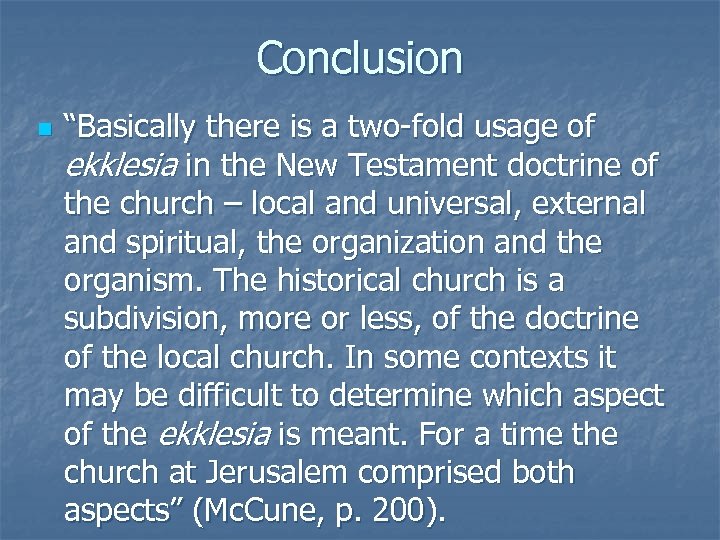 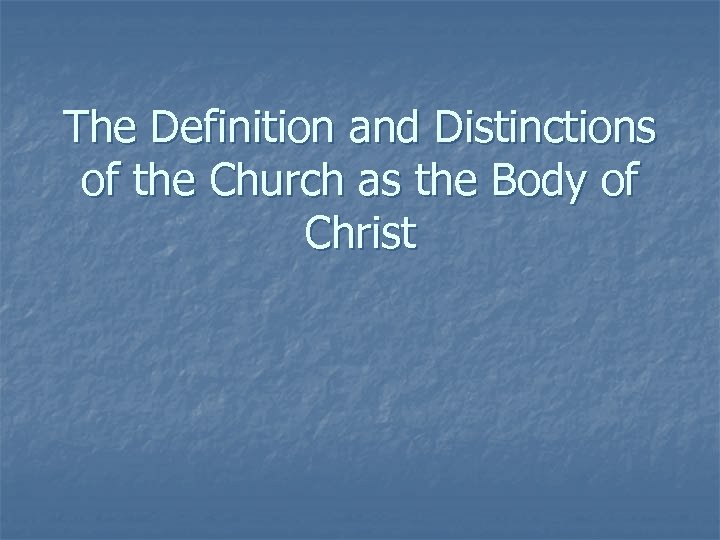 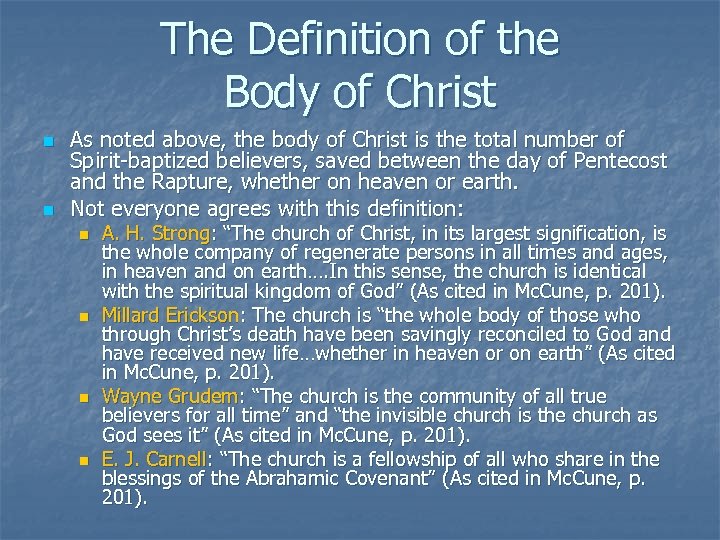 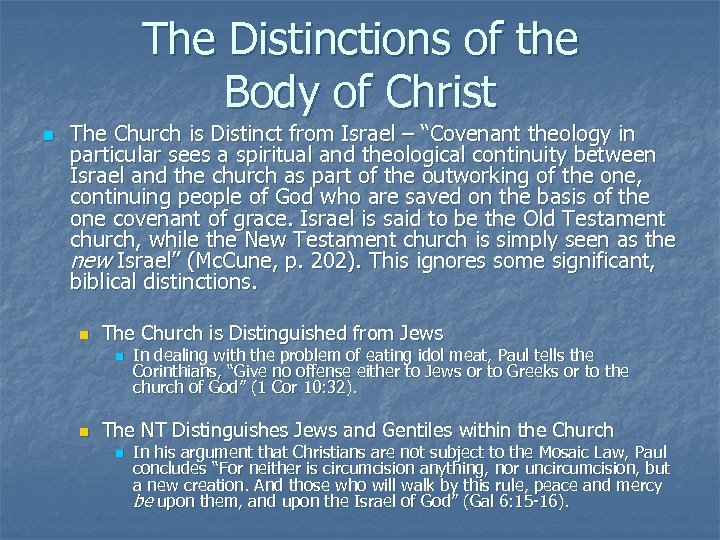 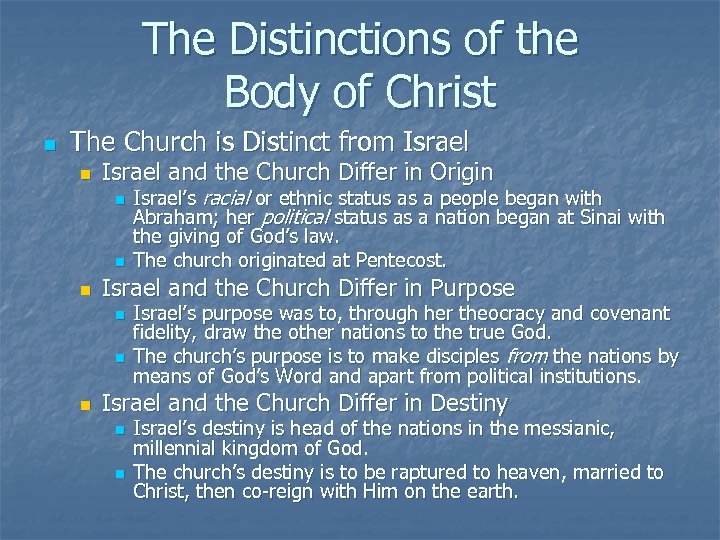 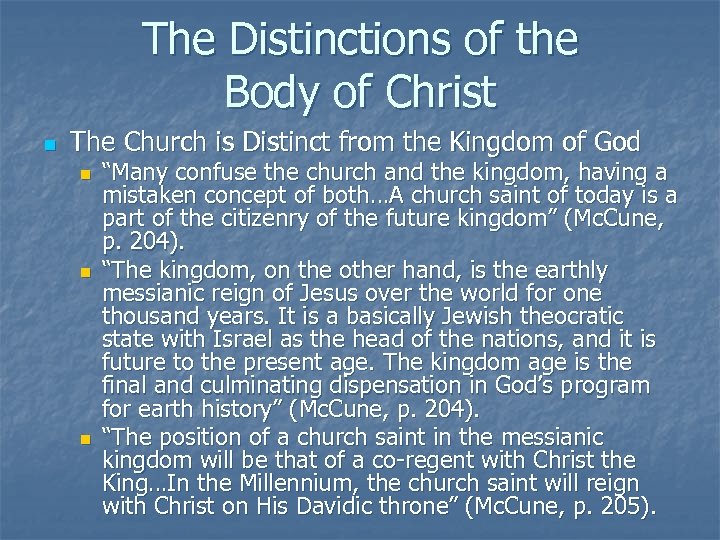 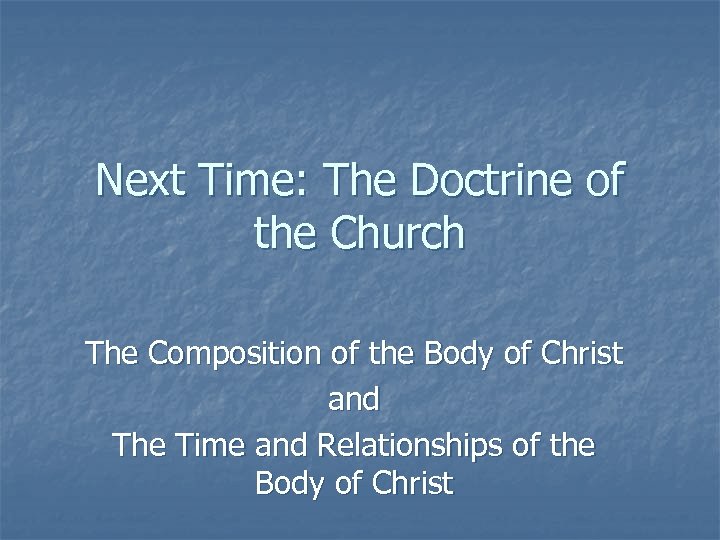 Скачать презентацию Systematic Theology III The Doctrine of the Church

The Importance of the Doctrine n Dispensationally n n “It is necessary to keep a clear biblical distinction between the dispensations of Law and Grace, the church and Israel” (Mc. Cune, p. 195). Practically n “Scripture teaches that the local church is the ‘pillar and support of the truth’ (1 Tim 3: 15) and is the only God-appointed institution authorized to carry out His program of witness and service on earth during the present age. Soulwinning, revival efforts and missionary endeavors are ultimately to be under the direction and supervision of the local assembly. Associations of churches can carry out certain of these endeavors. Converts are to be garnered into a Bible-believing and Bible-teaching local church for nurture and growth. The local church becomes the base of operations for these converts to go out and win others to Christ” (Mc. Cune, p. 195).

The Meaning of the Word Ekklesia in the NT n The Etymology of the Word n n “Ekklesia apparently comes from the Greek words ek and kaleo…it appears that ekklesia meant a called out body for whatever purposes or surroundings” (Mc. Cune, p. 195). What Ekklesia Does Not Mean in the NT n A Building n n A Denomination n n “Church buildings as such were not prominent until the 4 th century A. D. Until then, churches normally met in houses (see Rom 16: 5; 1 Cor 16: 19; Col 4: 15; Acts 2: 46 [? ]; 20: 20)” (Mc. Cune, p. 196). “Scripture does not use ekklesia to refer to denominational entities, like the Baptist or the Presbyterian churches of the present day” (Mc. Cune, p. 196). A State or Religious Organization n “There is no union of church and state in the New Testament (i. e. , no Holy Roman Empire, state church, or churchly state)” (Mc. Cune, p. 196).

The Usage of Ekklesia n In Secular Sources n “Basically ekklesia means assembly…The word ekklesia in secular thought seems not to have been used for religious assemblies. Therefore the significance of this background for the New Testament concept is dubious. In the New Testament theological usage, ekklesia has the definite article, something it does not have in secular usage. This appears to mean the concept of the ekklesia in the New Testament is unique” (Mc. Cune, p. 196 -97). n In the Septuagint n “Ekklesia is used to translate the Hebrew word qahal in 77 passages. Although qahal is also translated by seven other Greek words, ekklesia is used to translate only qahal and no other n Hebrew term, and it is used in the majority of translations of qahal. Qahal has the meaning of congregation, assembly or convocation. It is elastic enough to cover nearly any kind of gathering, with the context determining its exact nature and purpose” (Mc. Cune, p. 197).

The Three-fold Usage of Ekklesia in the New Testament n A Civil Assembly n n The Congregation of Israel n n n See Acts 19: 23 -32, 39, 41. Acts 7: 38 “This is the one [i. e. , Moses] who was in the congregation in the wilderness together with the angel who was speaking to him on Mount Sinai, and who was with our fathers; and he received living oracles to pass on to you. ” Hebrews 2: 12 [citing Psa 22: 22] saying, "I will proclaim Thy name to My brethren, In the midst of the congregation I will sing Thy praise. “ The New Testament Church n “This is the overwhelming usage of ekklesia and is the subject of the doctrine of the Church in systematic theology. Of all the references to the ekklesia in the NT, there are very few that do not refer to the New Testament church” (Mc. Cune, p. 198).

The Usage of Ekklesia with Reference to the NT Church n The Body of Christ n n The Local Church n n “Paul speaks of the “the church of God which is at Corinth” (1 Cor 1: 2) in one of a multitude of examples of this usage…The local church is the visible expression of the body church in any one geographic place on earth” (Mc. Cune, p. 199). The Historical Church n n “This is sometimes called the universal church, which means it includes all believers saved between Pentecost and the Rapture, whether in heaven or on earth. Others term it the invisible church, which indicates that the exact limits of the church cannot be humanly defined” (Mc. Cune, p. 199). Ephesians 1: 22 -23 And He put all things in subjection under His feet, and gave Him as head over all things to the church, which is His body, the fulness of Him who fills all in all. 1 Corinthians 12: 13 For by one Spirit we were all baptized into one body, whether Jews or Greeks, whether slaves or free, and we were all made to drink of one Spirit. “The historical church is the visible expression of the body church on earth within a particular period of time” (Mc. Cune, p. 199). See Acts 9: 31; Gal 1: 13; Phil 3: 6. Note: “An unbaptized, unaffiliated Christian is unknown in the New Testament” (Mc. Cune, p. 200).

Conclusion n “Basically there is a two-fold usage of ekklesia in the New Testament doctrine of the church – local and universal, external and spiritual, the organization and the organism. The historical church is a subdivision, more or less, of the doctrine of the local church. In some contexts it may be difficult to determine which aspect of the ekklesia is meant. For a time the church at Jerusalem comprised both aspects” (Mc. Cune, p. 200).

The Distinctions of the Body of Christ n The Church is Distinct from Israel – “Covenant theology in particular sees a spiritual and theological continuity between Israel and the church as part of the outworking of the one, continuing people of God who are saved on the basis of the one covenant of grace. Israel is said to be the Old Testament church, while the New Testament church is simply seen as the new Israel” (Mc. Cune, p. 202). This ignores some significant, biblical distinctions. n The Church is Distinguished from Jews n n In dealing with the problem of eating idol meat, Paul tells the Corinthians, “Give no offense either to Jews or to Greeks or to the church of God” (1 Cor 10: 32). The NT Distinguishes Jews and Gentiles within the Church n In his argument that Christians are not subject to the Mosaic Law, Paul concludes “For neither is circumcision anything, nor uncircumcision, but a new creation. And those who will walk by this rule, peace and mercy be upon them, and upon the Israel of God” (Gal 6: 15 -16).

The Distinctions of the Body of Christ n The Church is Distinct from Israel n Israel and the Church Differ in Origin n Israel and the Church Differ in Purpose n n n Israel’s racial or ethnic status as a people began with Abraham; her political status as a nation began at Sinai with the giving of God’s law. The church originated at Pentecost. Israel’s purpose was to, through her theocracy and covenant fidelity, draw the other nations to the true God. The church’s purpose is to make disciples from the nations by means of God’s Word and apart from political institutions. Israel and the Church Differ in Destiny n n Israel’s destiny is head of the nations in the messianic, millennial kingdom of God. The church’s destiny is to be raptured to heaven, married to Christ, then co-reign with Him on the earth.

The Distinctions of the Body of Christ n The Church is Distinct from the Kingdom of God n n n “Many confuse the church and the kingdom, having a mistaken concept of both…A church saint of today is a part of the citizenry of the future kingdom” (Mc. Cune, p. 204). “The kingdom, on the other hand, is the earthly messianic reign of Jesus over the world for one thousand years. It is a basically Jewish theocratic state with Israel as the head of the nations, and it is future to the present age. The kingdom age is the final and culminating dispensation in God’s program for earth history” (Mc. Cune, p. 204). “The position of a church saint in the messianic kingdom will be that of a co-regent with Christ the King…In the Millennium, the church saint will reign with Christ on His Davidic throne” (Mc. Cune, p. 205).