Systematic Theology I Angelology Part I 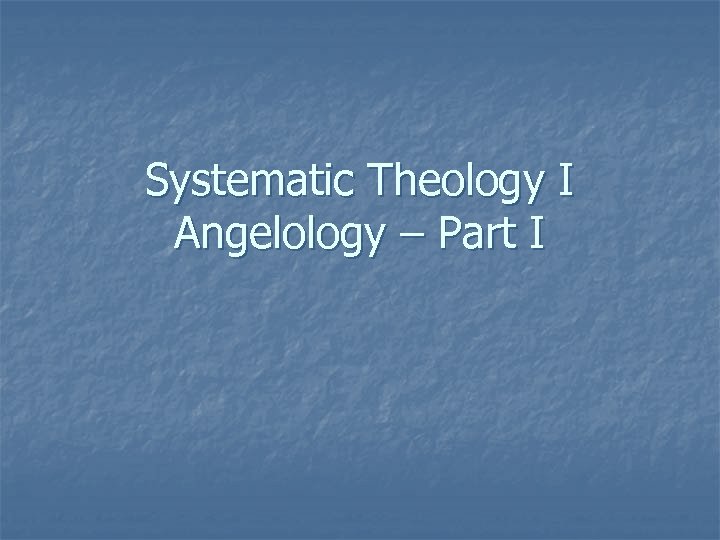 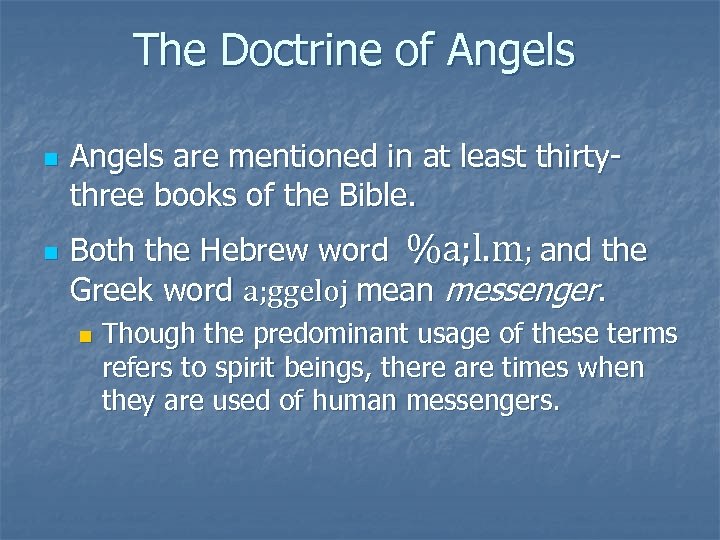 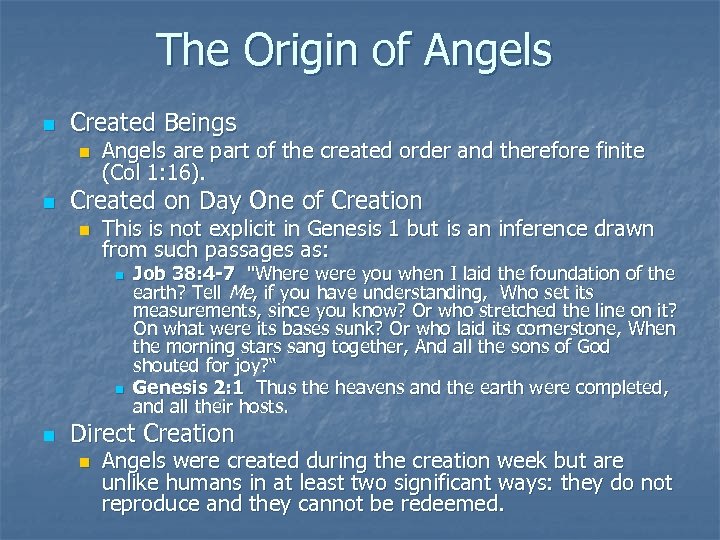 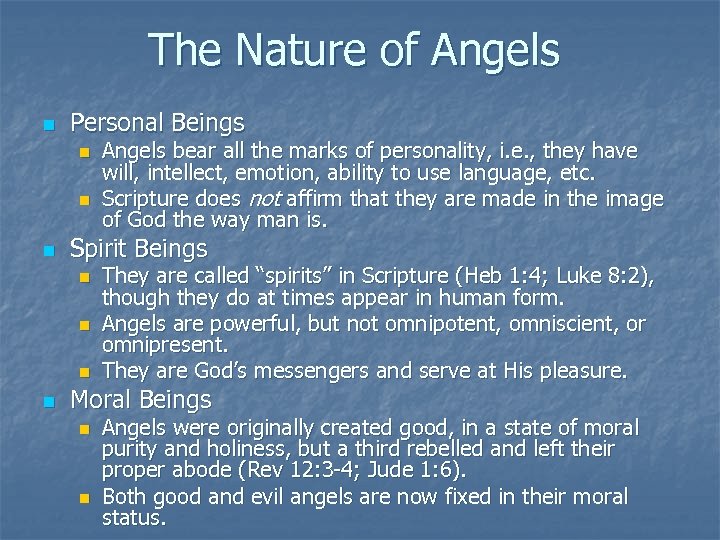 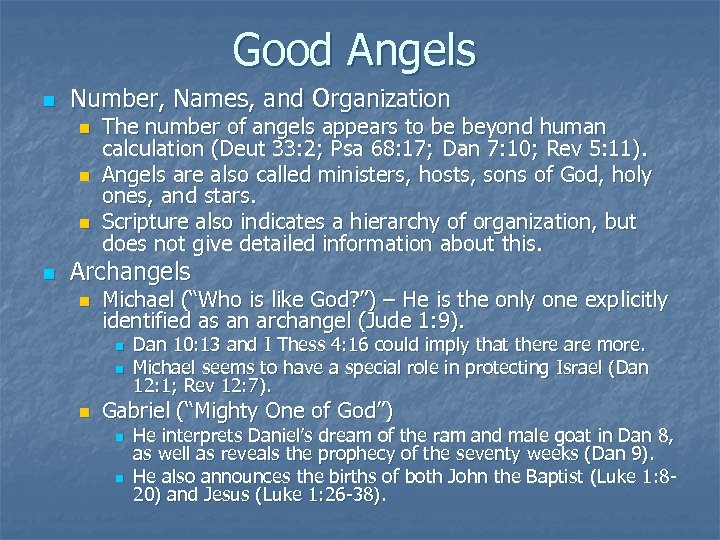 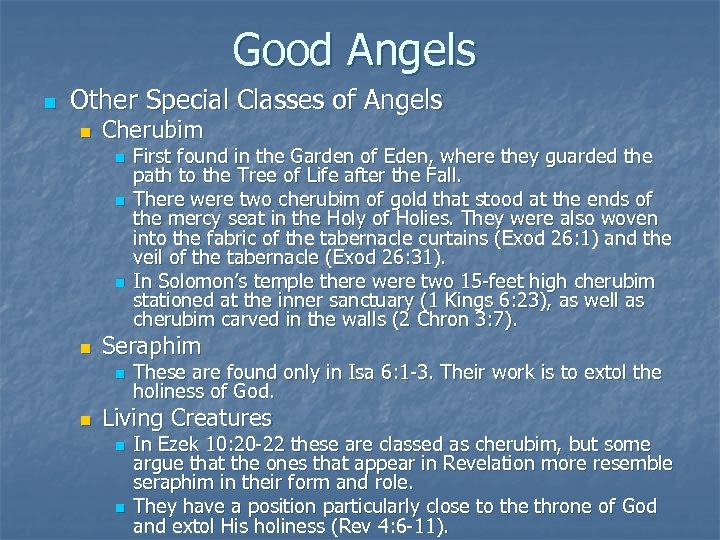 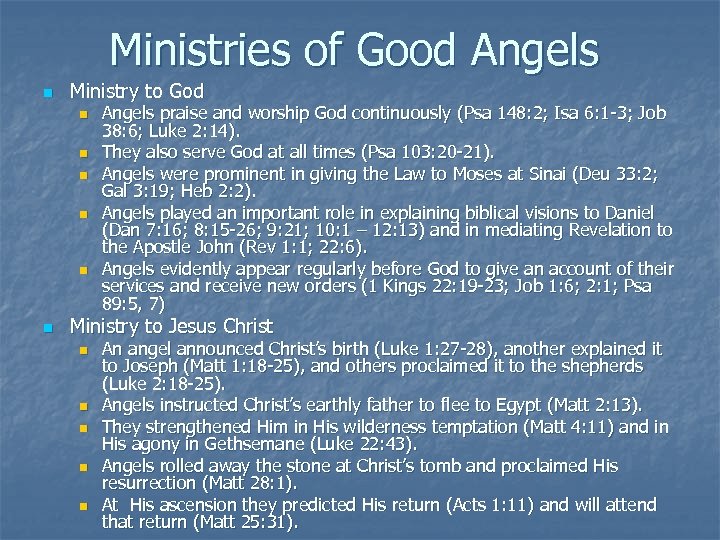 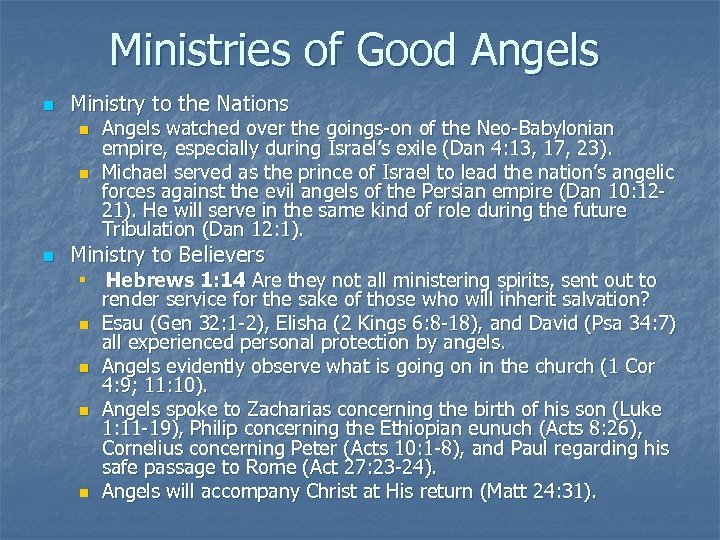 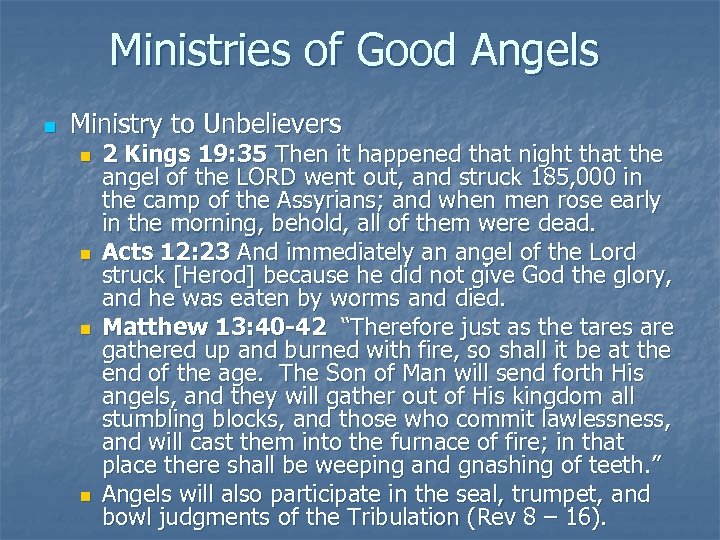 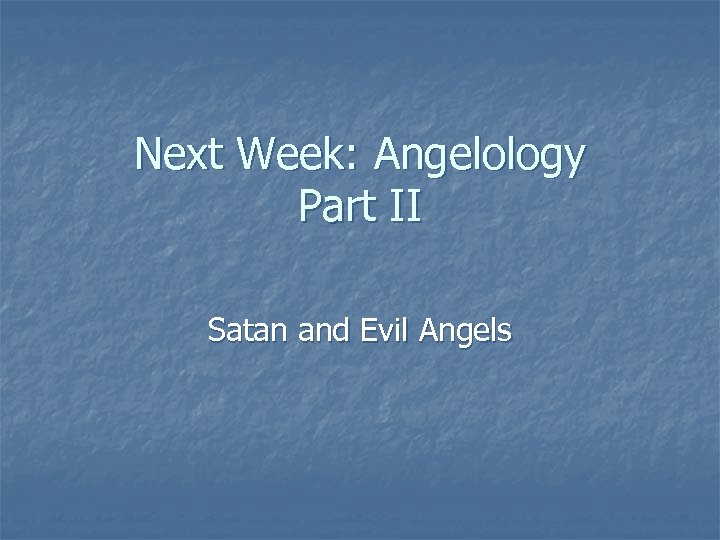 Systematic Theology I Angelology – Part I

The Doctrine of Angels n n Angels are mentioned in at least thirtythree books of the Bible. Both the Hebrew word %a; l. m; and the Greek word a; ggeloj mean messenger. n Though the predominant usage of these terms refers to spirit beings, there are times when they are used of human messengers.

The Origin of Angels n Created Beings n n Angels are part of the created order and therefore finite (Col 1: 16). Created on Day One of Creation n This is not explicit in Genesis 1 but is an inference drawn from such passages as: n n n Job 38: 4 -7 "Where were you when I laid the foundation of the earth? Tell Me, if you have understanding, Who set its measurements, since you know? Or who stretched the line on it? On what were its bases sunk? Or who laid its cornerstone, When the morning stars sang together, And all the sons of God shouted for joy? “ Genesis 2: 1 Thus the heavens and the earth were completed, and all their hosts. Direct Creation n Angels were created during the creation week but are unlike humans in at least two significant ways: they do not reproduce and they cannot be redeemed.

The Nature of Angels n Personal Beings n n n Spirit Beings n n Angels bear all the marks of personality, i. e. , they have will, intellect, emotion, ability to use language, etc. Scripture does not affirm that they are made in the image of God the way man is. They are called “spirits” in Scripture (Heb 1: 4; Luke 8: 2), though they do at times appear in human form. Angels are powerful, but not omnipotent, omniscient, or omnipresent. They are God’s messengers and serve at His pleasure. Moral Beings n n Angels were originally created good, in a state of moral purity and holiness, but a third rebelled and left their proper abode (Rev 12: 3 -4; Jude 1: 6). Both good and evil angels are now fixed in their moral status.

Good Angels n Other Special Classes of Angels n Cherubim n n Seraphim n n First found in the Garden of Eden, where they guarded the path to the Tree of Life after the Fall. There were two cherubim of gold that stood at the ends of the mercy seat in the Holy of Holies. They were also woven into the fabric of the tabernacle curtains (Exod 26: 1) and the veil of the tabernacle (Exod 26: 31). In Solomon’s temple there were two 15 -feet high cherubim stationed at the inner sanctuary (1 Kings 6: 23), as well as cherubim carved in the walls (2 Chron 3: 7). These are found only in Isa 6: 1 -3. Their work is to extol the holiness of God. Living Creatures n n In Ezek 10: 20 -22 these are classed as cherubim, but some argue that the ones that appear in Revelation more resemble seraphim in their form and role. They have a position particularly close to the throne of God and extol His holiness (Rev 4: 6 -11).

Do Believers Have Guardian Angels? n n n Many have suggested this based on Matt 18: 10 and Acts 12: 15. Roman Catholic theology emphasizes personal guardian angels, even for unbelievers. “In short, while believers have any number of angels as their servants (Heb 1: 14), there is not any sure support that each believer has a guardian angel” (Mc. Cune, p. 372).

Ministries of Good Angels n Ministry to Unbelievers n n 2 Kings 19: 35 Then it happened that night that the angel of the LORD went out, and struck 185, 000 in the camp of the Assyrians; and when men rose early in the morning, behold, all of them were dead. Acts 12: 23 And immediately an angel of the Lord struck [Herod] because he did not give God the glory, and he was eaten by worms and died. Matthew 13: 40 -42 “Therefore just as the tares are gathered up and burned with fire, so shall it be at the end of the age. The Son of Man will send forth His angels, and they will gather out of His kingdom all stumbling blocks, and those who commit lawlessness, and will cast them into the furnace of fire; in that place there shall be weeping and gnashing of teeth. ” Angels will also participate in the seal, trumpet, and bowl judgments of the Tribulation (Rev 8 – 16).