Sustainable Development in Chinese Towns and Cities By 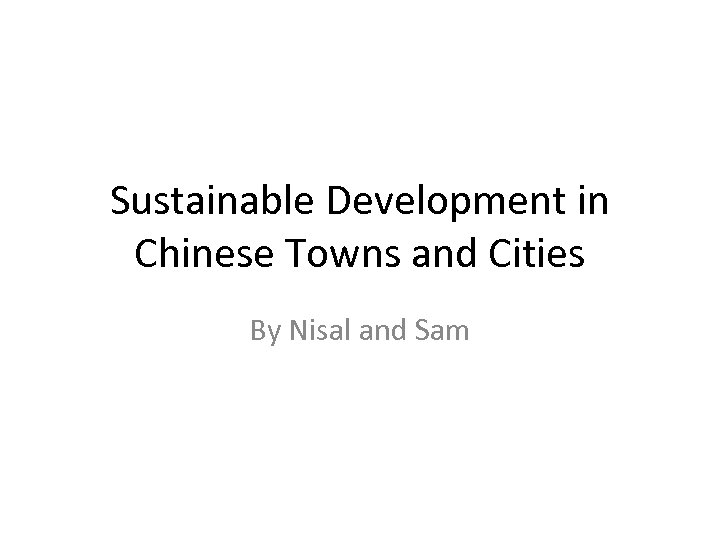 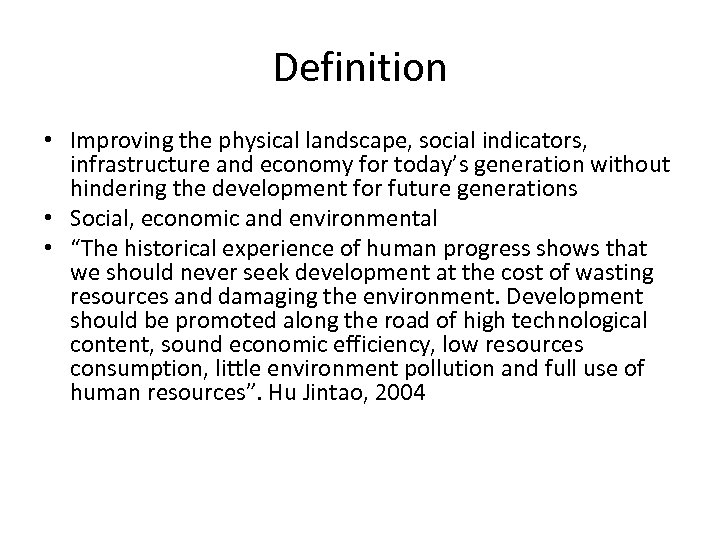 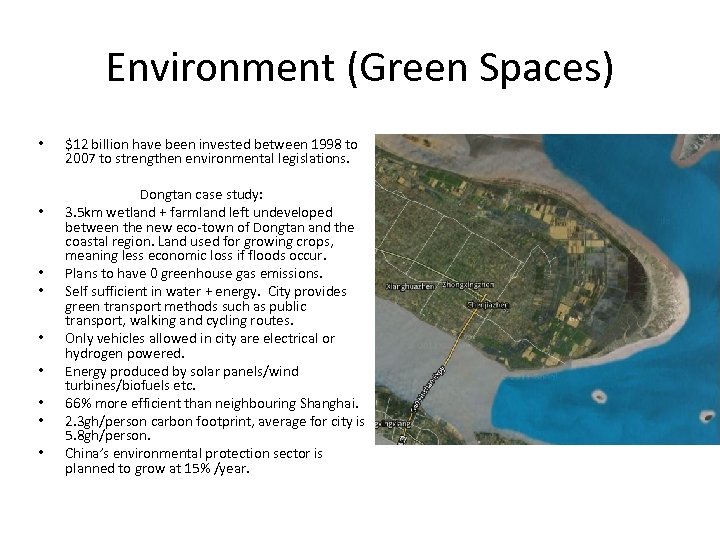 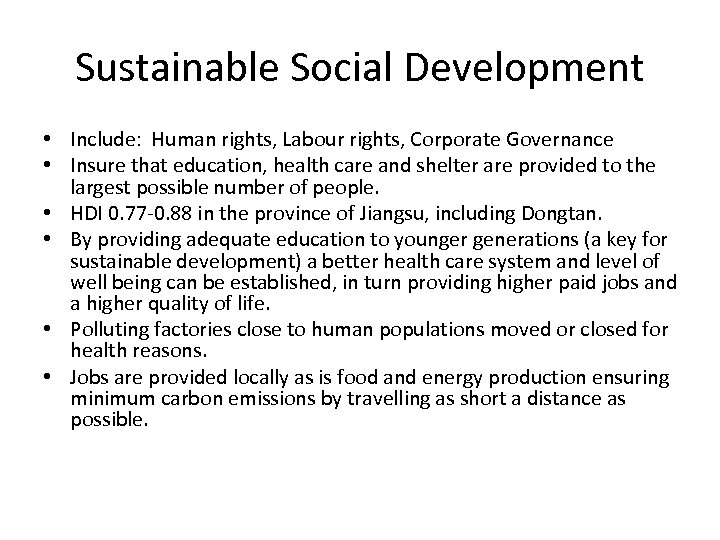 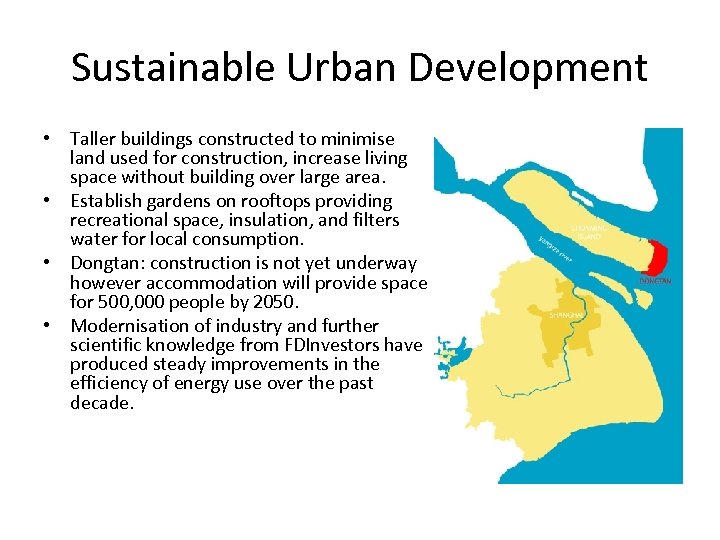 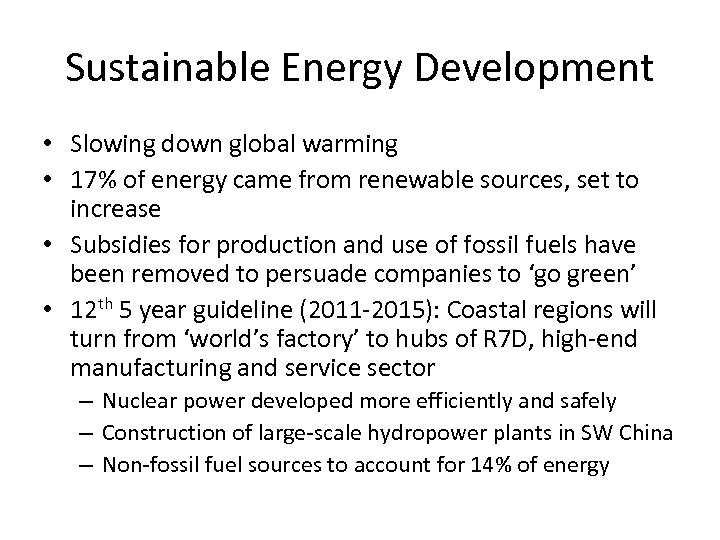 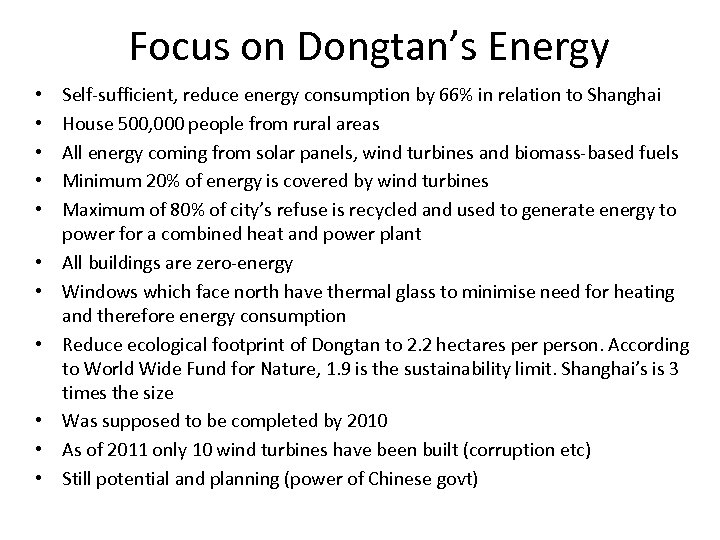 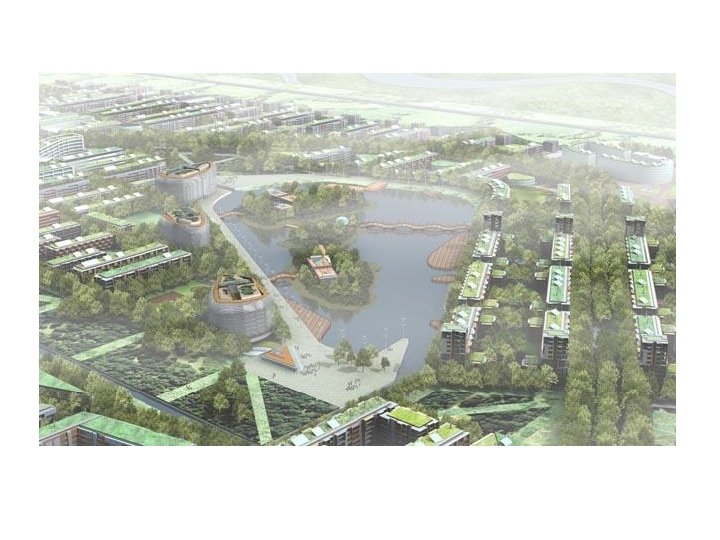 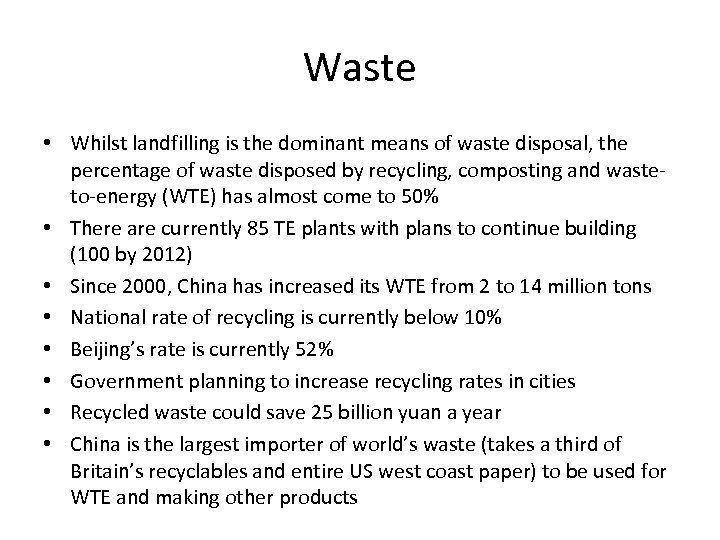 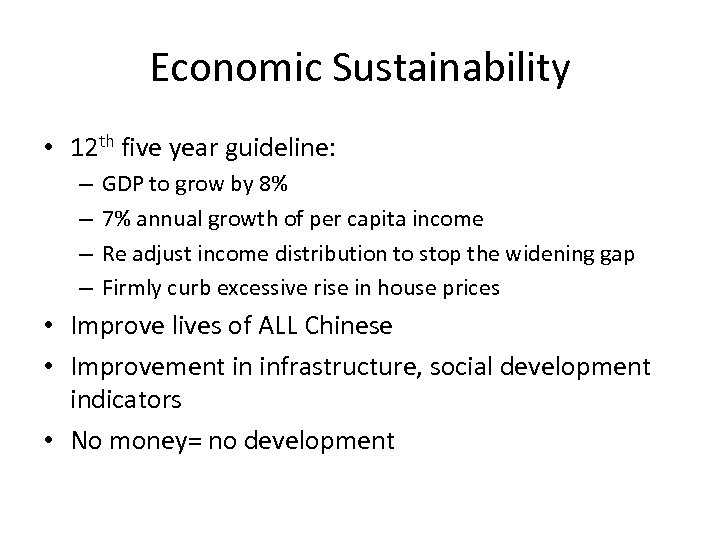 Скачать презентацию Sustainable Development in Chinese Towns and Cities By

Sustainable Development in Chinese Towns and Cities By Nisal and Sam

Definition • Improving the physical landscape, social indicators, infrastructure and economy for today’s generation without hindering the development for future generations • Social, economic and environmental • “The historical experience of human progress shows that we should never seek development at the cost of wasting resources and damaging the environment. Development should be promoted along the road of high technological content, sound economic efficiency, low resources consumption, little environment pollution and full use of human resources”. Hu Jintao, 2004

Sustainable Social Development • Include: Human rights, Labour rights, Corporate Governance • Insure that education, health care and shelter are provided to the largest possible number of people. • HDI 0. 77 -0. 88 in the province of Jiangsu, including Dongtan. • By providing adequate education to younger generations (a key for sustainable development) a better health care system and level of well being can be established, in turn providing higher paid jobs and a higher quality of life. • Polluting factories close to human populations moved or closed for health reasons. • Jobs are provided locally as is food and energy production ensuring minimum carbon emissions by travelling as short a distance as possible.

Sustainable Urban Development • Taller buildings constructed to minimise land used for construction, increase living space without building over large area. • Establish gardens on rooftops providing recreational space, insulation, and filters water for local consumption. • Dongtan: construction is not yet underway however accommodation will provide space for 500, 000 people by 2050. • Modernisation of industry and further scientific knowledge from FDInvestors have produced steady improvements in the efficiency of energy use over the past decade.

Sustainable Energy Development • Slowing down global warming • 17% of energy came from renewable sources, set to increase • Subsidies for production and use of fossil fuels have been removed to persuade companies to ‘go green’ • 12 th 5 year guideline (2011 -2015): Coastal regions will turn from ‘world’s factory’ to hubs of R 7 D, high-end manufacturing and service sector – Nuclear power developed more efficiently and safely – Construction of large-scale hydropower plants in SW China – Non-fossil fuel sources to account for 14% of energy

Focus on Dongtan’s Energy • • • Self-sufficient, reduce energy consumption by 66% in relation to Shanghai House 500, 000 people from rural areas All energy coming from solar panels, wind turbines and biomass-based fuels Minimum 20% of energy is covered by wind turbines Maximum of 80% of city’s refuse is recycled and used to generate energy to power for a combined heat and power plant All buildings are zero-energy Windows which face north have thermal glass to minimise need for heating and therefore energy consumption Reduce ecological footprint of Dongtan to 2. 2 hectares person. According to World Wide Fund for Nature, 1. 9 is the sustainability limit. Shanghai’s is 3 times the size Was supposed to be completed by 2010 As of 2011 only 10 wind turbines have been built (corruption etc) Still potential and planning (power of Chinese govt)

Waste • Whilst landfilling is the dominant means of waste disposal, the percentage of waste disposed by recycling, composting and wasteto-energy (WTE) has almost come to 50% • There are currently 85 TE plants with plans to continue building (100 by 2012) • Since 2000, China has increased its WTE from 2 to 14 million tons • National rate of recycling is currently below 10% • Beijing’s rate is currently 52% • Government planning to increase recycling rates in cities • Recycled waste could save 25 billion yuan a year • China is the largest importer of world’s waste (takes a third of Britain’s recyclables and entire US west coast paper) to be used for WTE and making other products