Super Llama Once upon a time there 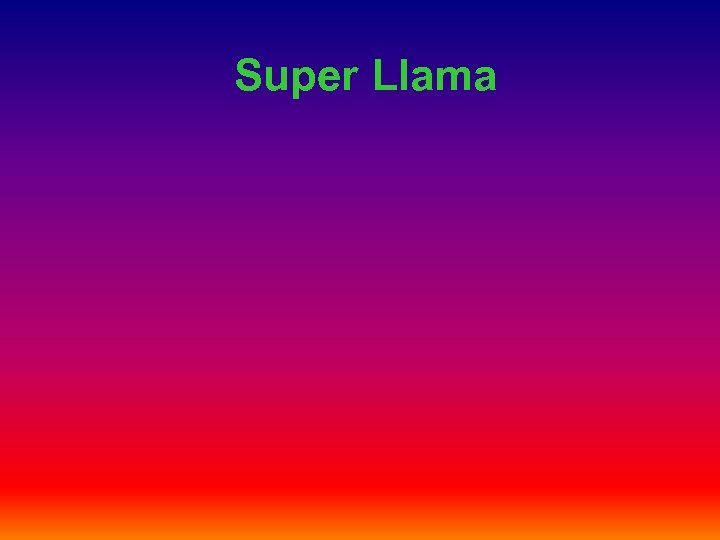 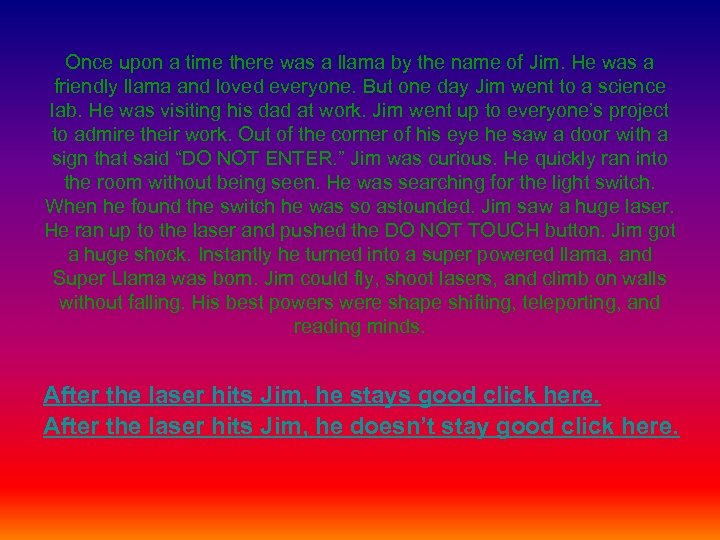 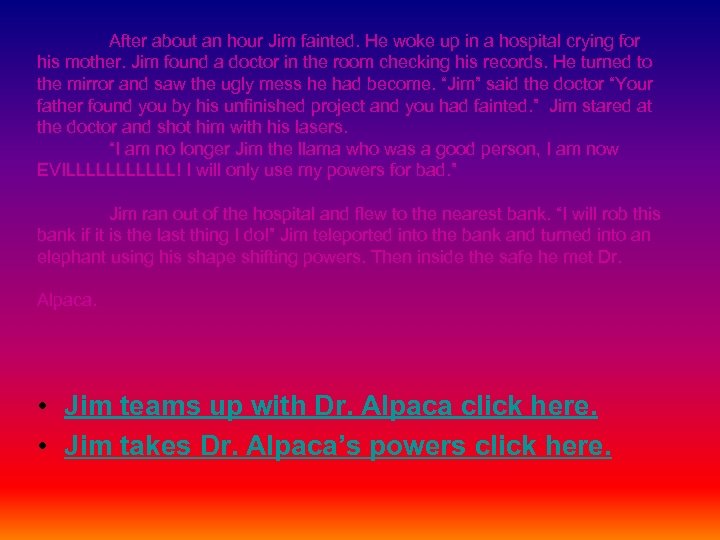 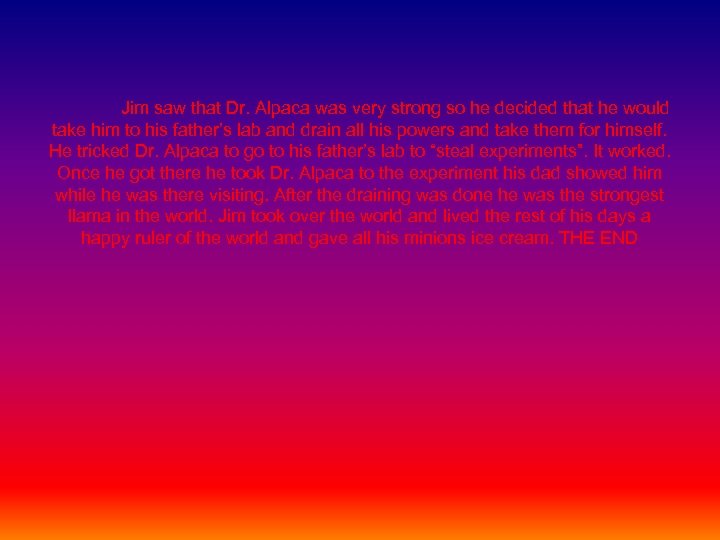 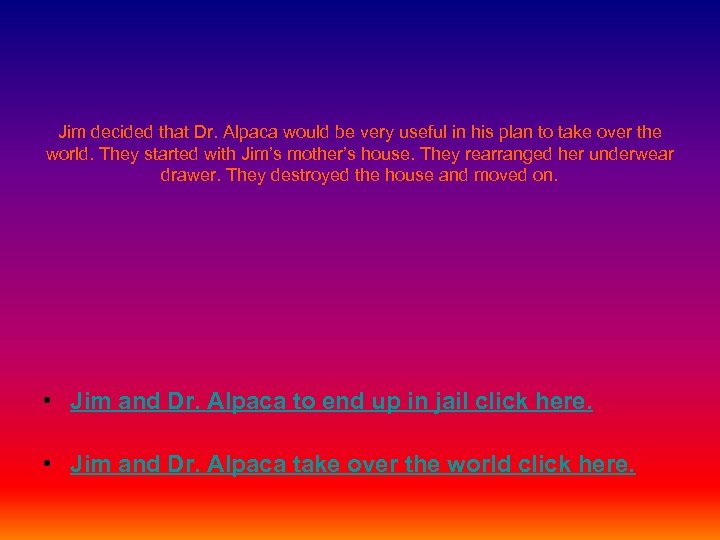 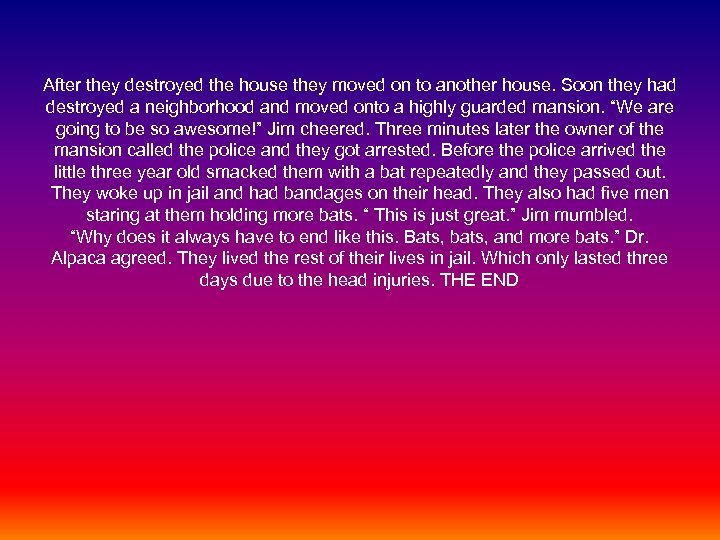 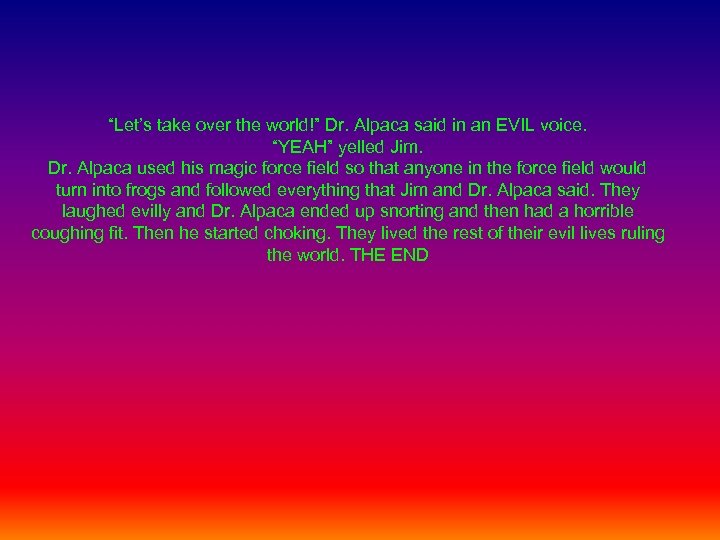 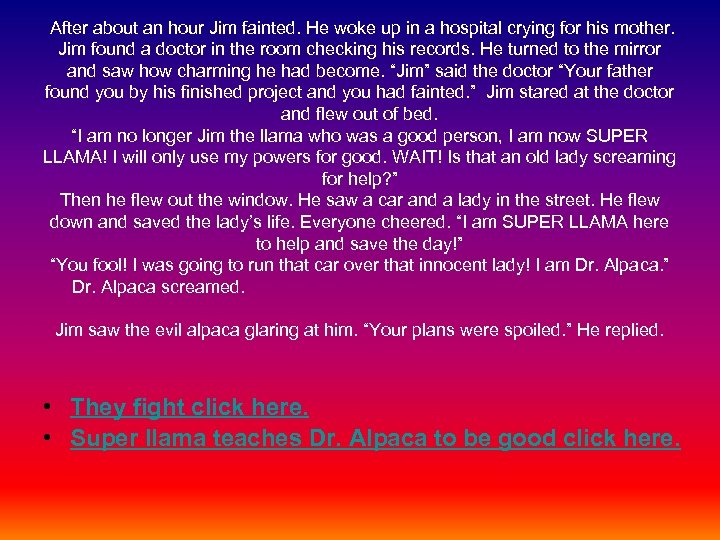 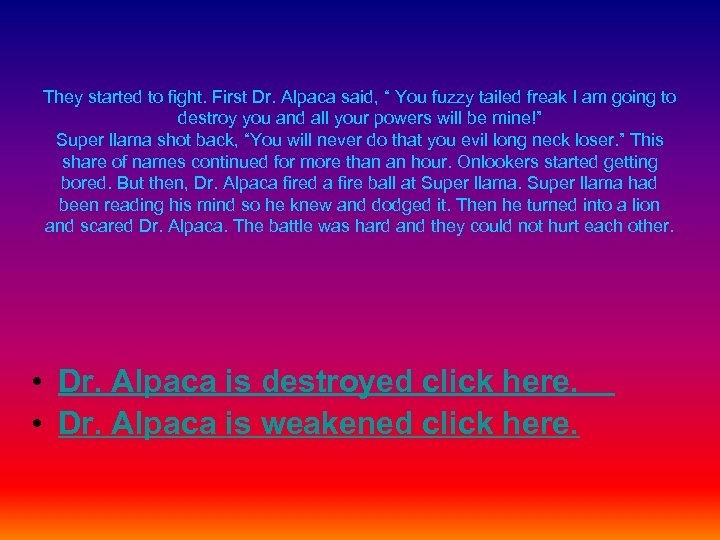 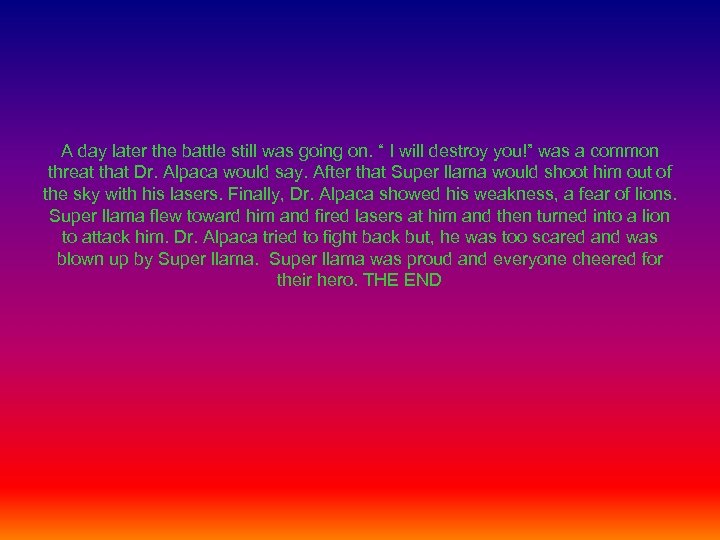 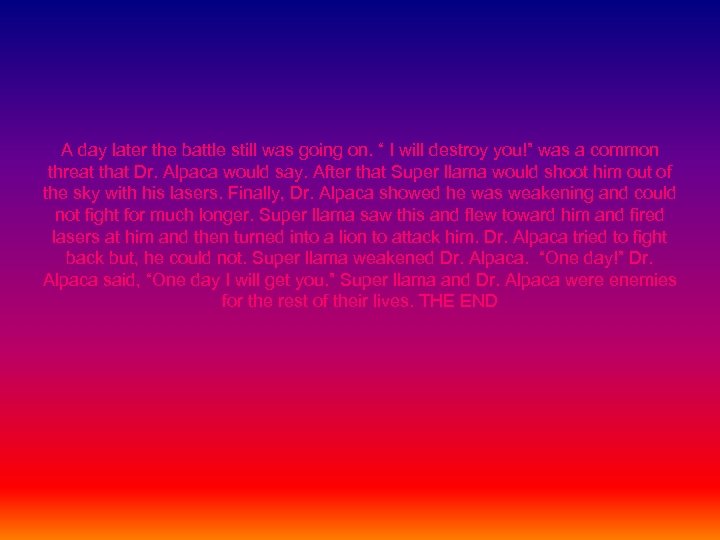 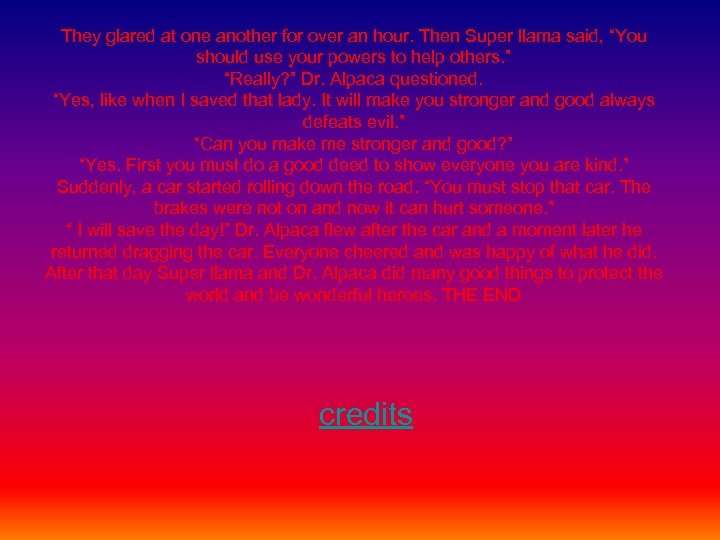 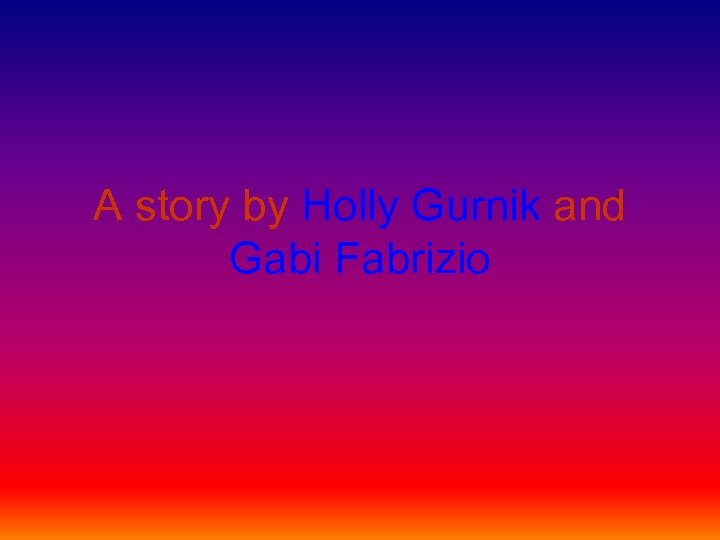 Скачать презентацию Super Llama Once upon a time there

Once upon a time there was a llama by the name of Jim. He was a friendly llama and loved everyone. But one day Jim went to a science lab. He was visiting his dad at work. Jim went up to everyone’s project to admire their work. Out of the corner of his eye he saw a door with a sign that said “DO NOT ENTER. ” Jim was curious. He quickly ran into the room without being seen. He was searching for the light switch. When he found the switch he was so astounded. Jim saw a huge laser. He ran up to the laser and pushed the DO NOT TOUCH button. Jim got a huge shock. Instantly he turned into a super powered llama, and Super Llama was born. Jim could fly, shoot lasers, and climb on walls without falling. His best powers were shape shifting, teleporting, and reading minds. After the laser hits Jim, he stays good click here. After the laser hits Jim, he doesn’t stay good click here.

After about an hour Jim fainted. He woke up in a hospital crying for his mother. Jim found a doctor in the room checking his records. He turned to the mirror and saw the ugly mess he had become. “Jim” said the doctor “Your father found you by his unfinished project and you had fainted. ” Jim stared at the doctor and shot him with his lasers. “I am no longer Jim the llama who was a good person, I am now EVILLLLLL! I will only use my powers for bad. ” Jim ran out of the hospital and flew to the nearest bank. “I will rob this bank if it is the last thing I do!” Jim teleported into the bank and turned into an elephant using his shape shifting powers. Then inside the safe he met Dr. Alpaca. • Jim teams up with Dr. Alpaca click here. • Jim takes Dr. Alpaca’s powers click here.

Jim saw that Dr. Alpaca was very strong so he decided that he would take him to his father’s lab and drain all his powers and take them for himself. He tricked Dr. Alpaca to go to his father’s lab to “steal experiments”. It worked. Once he got there he took Dr. Alpaca to the experiment his dad showed him while he was there visiting. After the draining was done he was the strongest llama in the world. Jim took over the world and lived the rest of his days a happy ruler of the world and gave all his minions ice cream. THE END

After they destroyed the house they moved on to another house. Soon they had destroyed a neighborhood and moved onto a highly guarded mansion. “We are going to be so awesome!” Jim cheered. Three minutes later the owner of the mansion called the police and they got arrested. Before the police arrived the little three year old smacked them with a bat repeatedly and they passed out. They woke up in jail and had bandages on their head. They also had five men staring at them holding more bats. “ This is just great. ” Jim mumbled. “Why does it always have to end like this. Bats, bats, and more bats. ” Dr. Alpaca agreed. They lived the rest of their lives in jail. Which only lasted three days due to the head injuries. THE END

“Let’s take over the world!” Dr. Alpaca said in an EVIL voice. “YEAH” yelled Jim. Dr. Alpaca used his magic force field so that anyone in the force field would turn into frogs and followed everything that Jim and Dr. Alpaca said. They laughed evilly and Dr. Alpaca ended up snorting and then had a horrible coughing fit. Then he started choking. They lived the rest of their evil lives ruling the world. THE END

After about an hour Jim fainted. He woke up in a hospital crying for his mother. Jim found a doctor in the room checking his records. He turned to the mirror and saw how charming he had become. “Jim” said the doctor “Your father found you by his finished project and you had fainted. ” Jim stared at the doctor and flew out of bed. “I am no longer Jim the llama who was a good person, I am now SUPER LLAMA! I will only use my powers for good. WAIT! Is that an old lady screaming for help? ” Then he flew out the window. He saw a car and a lady in the street. He flew down and saved the lady’s life. Everyone cheered. “I am SUPER LLAMA here to help and save the day!” “You fool! I was going to run that car over that innocent lady! I am Dr. Alpaca. ” Dr. Alpaca screamed. Jim saw the evil alpaca glaring at him. “Your plans were spoiled. ” He replied. • They fight click here. • Super llama teaches Dr. Alpaca to be good click here.

They started to fight. First Dr. Alpaca said, “ You fuzzy tailed freak I am going to destroy you and all your powers will be mine!” Super llama shot back, “You will never do that you evil long neck loser. ” This share of names continued for more than an hour. Onlookers started getting bored. But then, Dr. Alpaca fired a fire ball at Super llama had been reading his mind so he knew and dodged it. Then he turned into a lion and scared Dr. Alpaca. The battle was hard and they could not hurt each other. • Dr. Alpaca is destroyed click here. • Dr. Alpaca is weakened click here.

A day later the battle still was going on. “ I will destroy you!” was a common threat that Dr. Alpaca would say. After that Super llama would shoot him out of the sky with his lasers. Finally, Dr. Alpaca showed his weakness, a fear of lions. Super llama flew toward him and fired lasers at him and then turned into a lion to attack him. Dr. Alpaca tried to fight back but, he was too scared and was blown up by Super llama was proud and everyone cheered for their hero. THE END

A day later the battle still was going on. “ I will destroy you!” was a common threat that Dr. Alpaca would say. After that Super llama would shoot him out of the sky with his lasers. Finally, Dr. Alpaca showed he was weakening and could not fight for much longer. Super llama saw this and flew toward him and fired lasers at him and then turned into a lion to attack him. Dr. Alpaca tried to fight back but, he could not. Super llama weakened Dr. Alpaca. “One day!” Dr. Alpaca said, “One day I will get you. ” Super llama and Dr. Alpaca were enemies for the rest of their lives. THE END

They glared at one another for over an hour. Then Super llama said, “You should use your powers to help others. ” “Really? ” Dr. Alpaca questioned. “Yes, like when I saved that lady. It will make you stronger and good always defeats evil. ” “Can you make me stronger and good? ” “Yes. First you must do a good deed to show everyone you are kind. ” Suddenly, a car started rolling down the road. “You must stop that car. The brakes were not on and now it can hurt someone. ” “ I will save the day!” Dr. Alpaca flew after the car and a moment later he returned dragging the car. Everyone cheered and was happy of what he did. After that day Super llama and Dr. Alpaca did many good things to protect the world and be wonderful heroes. THE END credits

A story by Holly Gurnik and Gabi Fabrizio

UTC(PTB) as the basis for legal time in