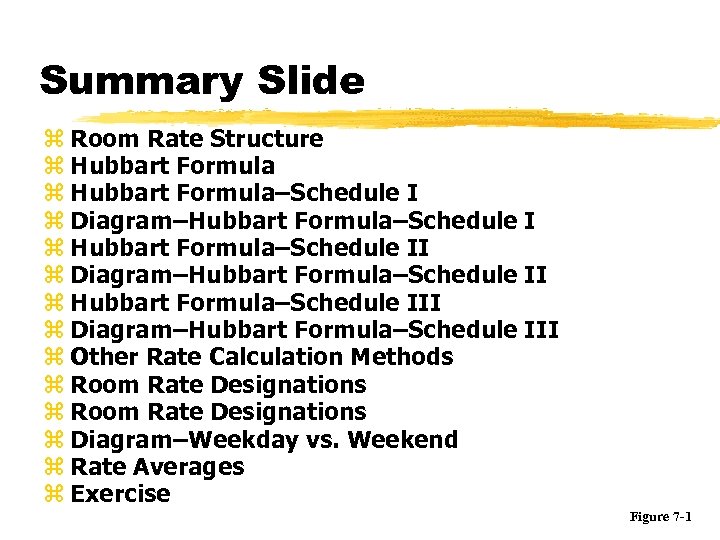 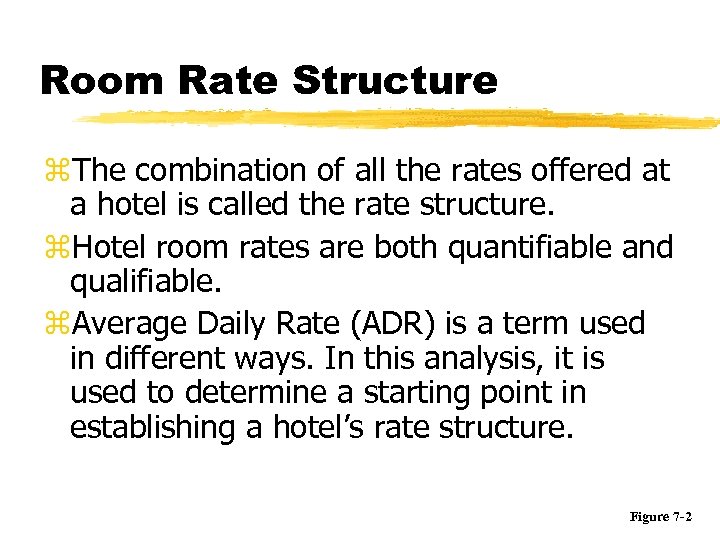 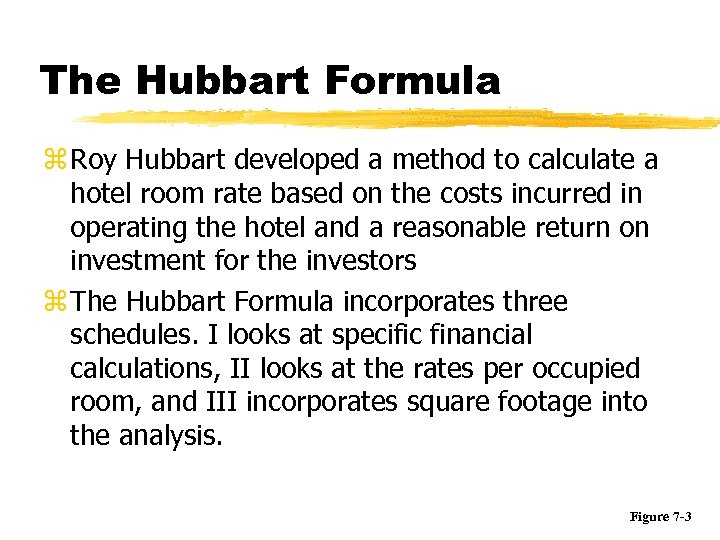 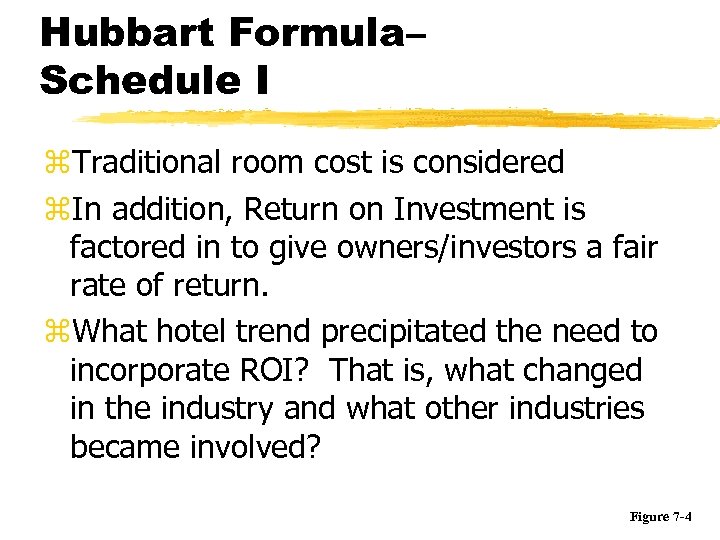 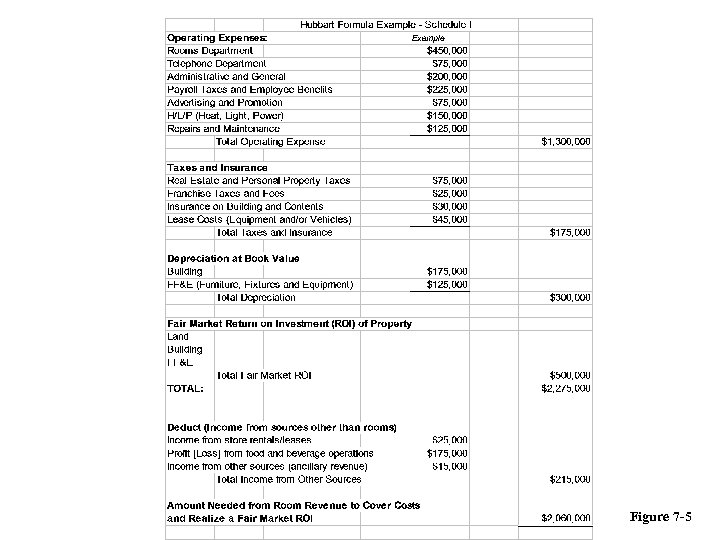 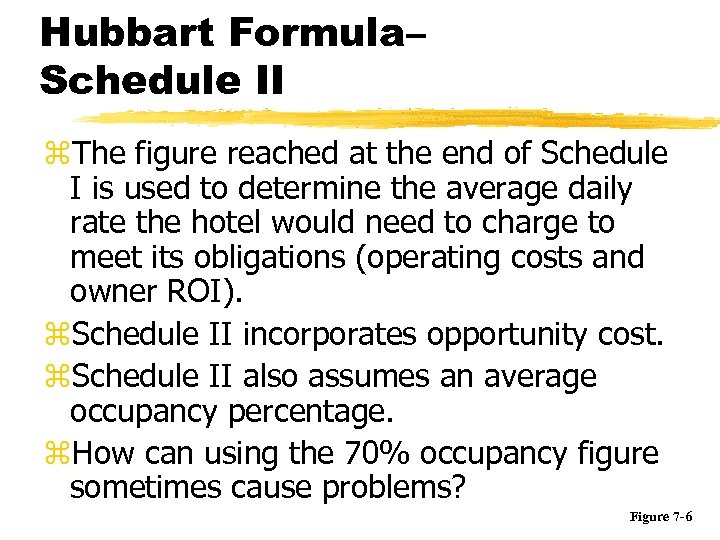 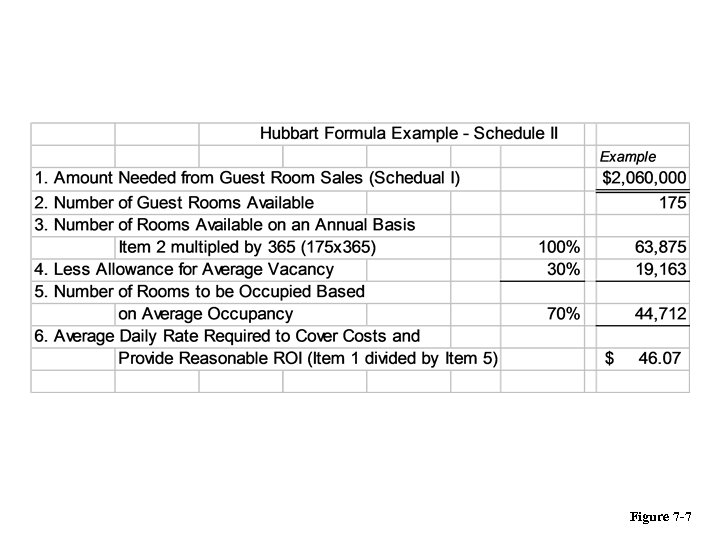 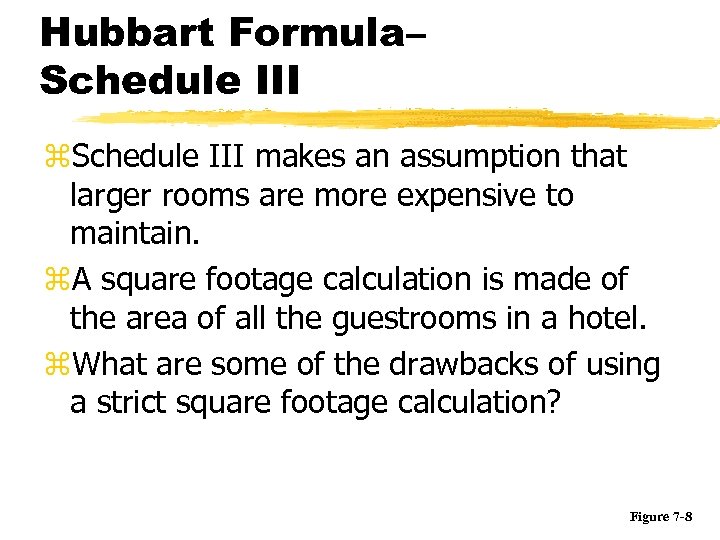 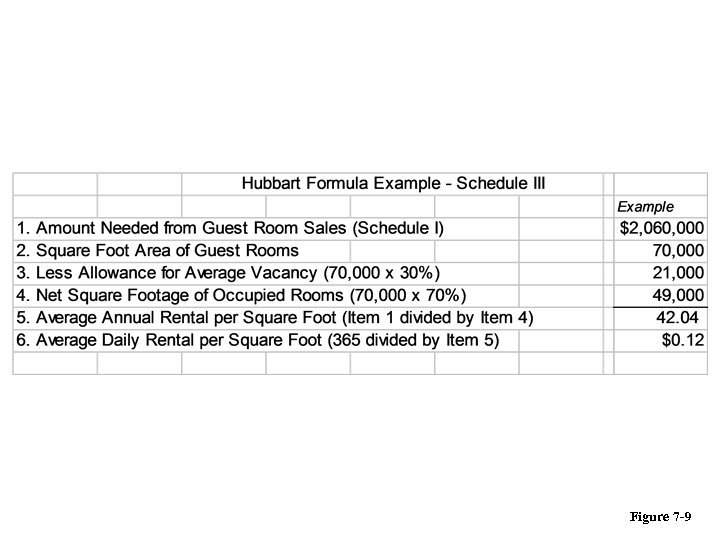 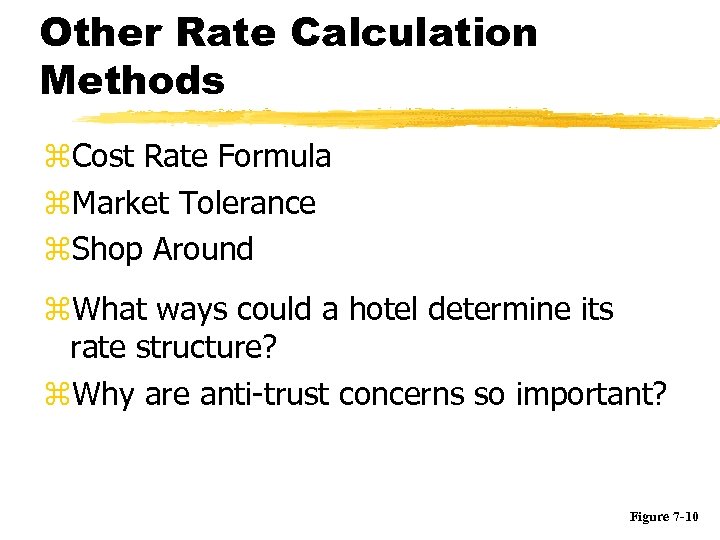 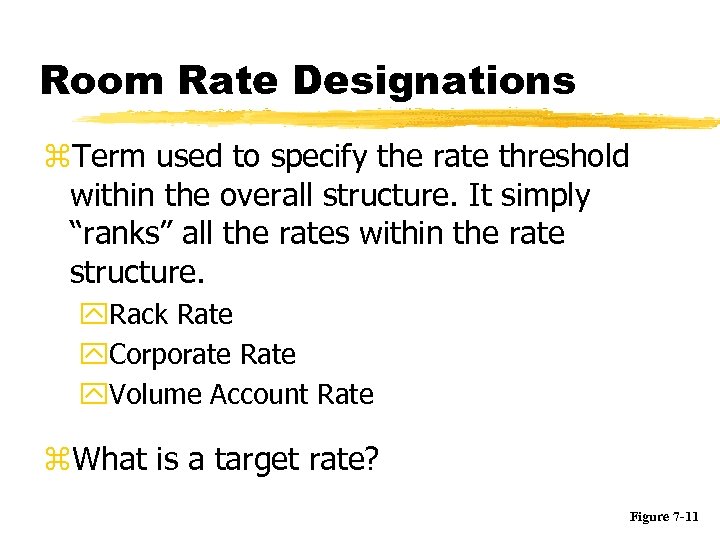 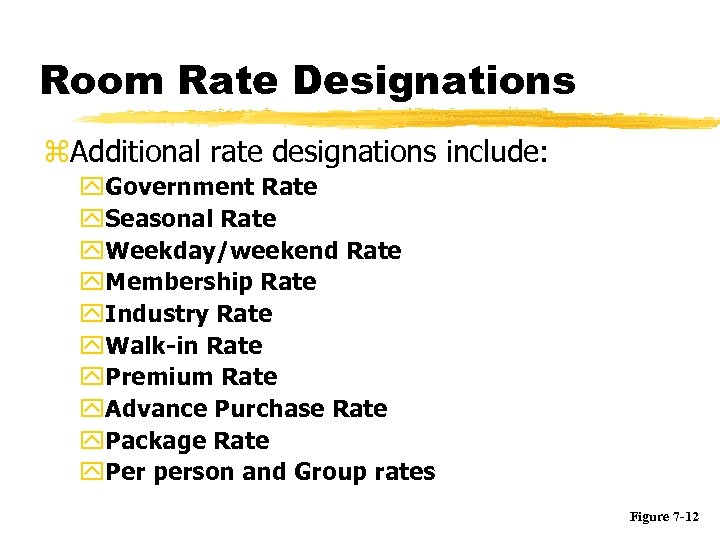 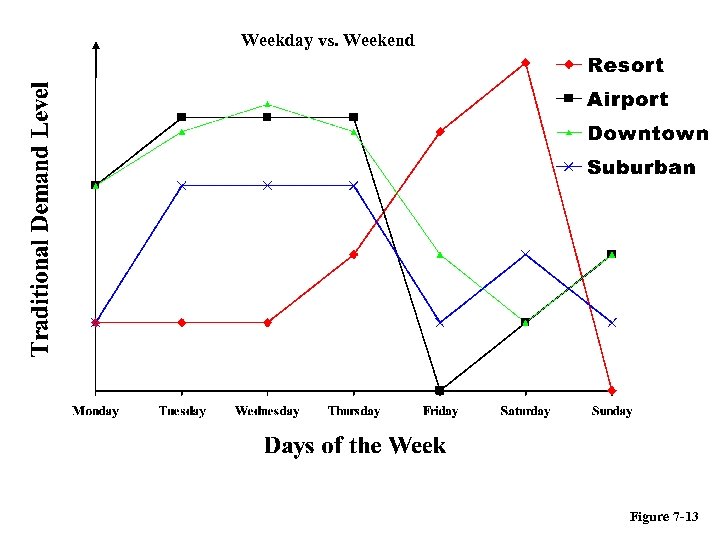 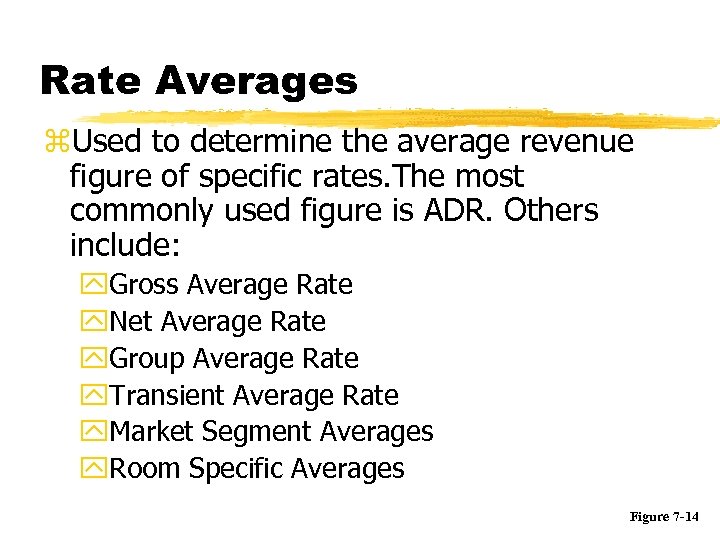 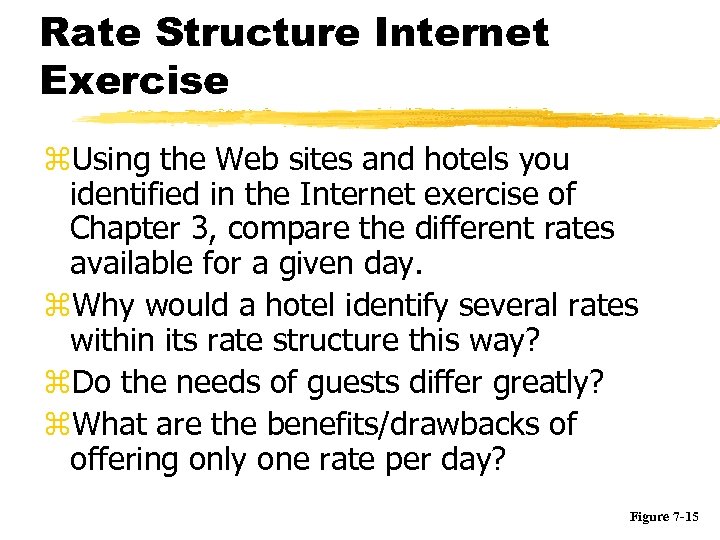 Room Rate Structure z. The combination of all the rates offered at a hotel is called the rate structure. z. Hotel room rates are both quantifiable and qualifiable. z. Average Daily Rate (ADR) is a term used in different ways. In this analysis, it is used to determine a starting point in establishing a hotel’s rate structure. Figure 7 -2

The Hubbart Formula z Roy Hubbart developed a method to calculate a hotel room rate based on the costs incurred in operating the hotel and a reasonable return on investment for the investors z The Hubbart Formula incorporates three schedules. I looks at specific financial calculations, II looks at the rates per occupied room, and III incorporates square footage into the analysis. Figure 7 -3

Hubbart Formula– Schedule I z. Traditional room cost is considered z. In addition, Return on Investment is factored in to give owners/investors a fair rate of return. z. What hotel trend precipitated the need to incorporate ROI? That is, what changed in the industry and what other industries became involved? Figure 7 -4

Hubbart Formula– Schedule II z. The figure reached at the end of Schedule I is used to determine the average daily rate the hotel would need to charge to meet its obligations (operating costs and owner ROI). z. Schedule II incorporates opportunity cost. z. Schedule II also assumes an average occupancy percentage. z. How can using the 70% occupancy figure sometimes cause problems? Figure 7 -6

Rate Structure Internet Exercise z. Using the Web sites and hotels you identified in the Internet exercise of Chapter 3, compare the different rates available for a given day. z. Why would a hotel identify several rates within its rate structure this way? z. Do the needs of guests differ greatly? z. What are the benefits/drawbacks of offering only one rate per day? Figure 7 -15