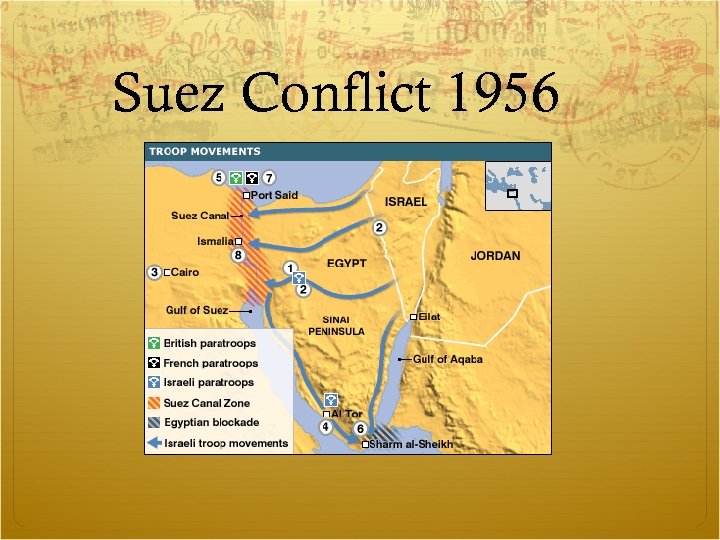 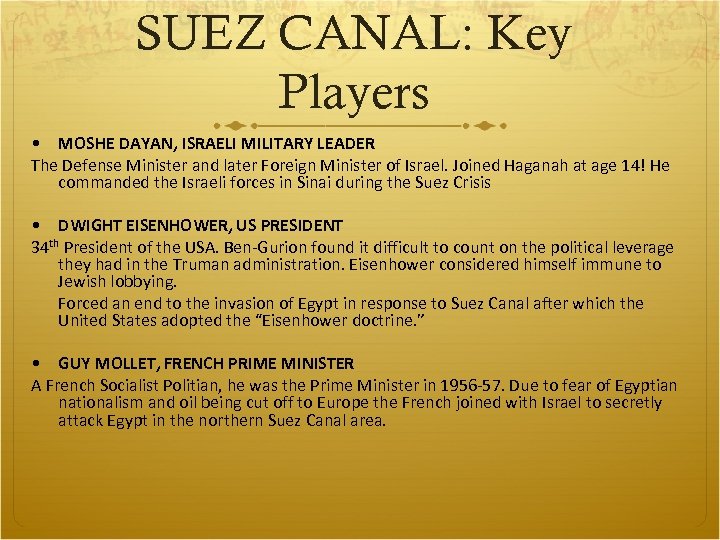 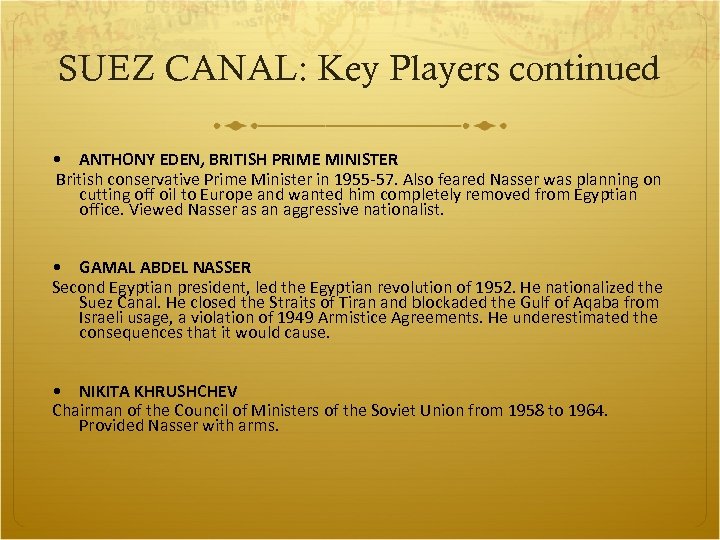 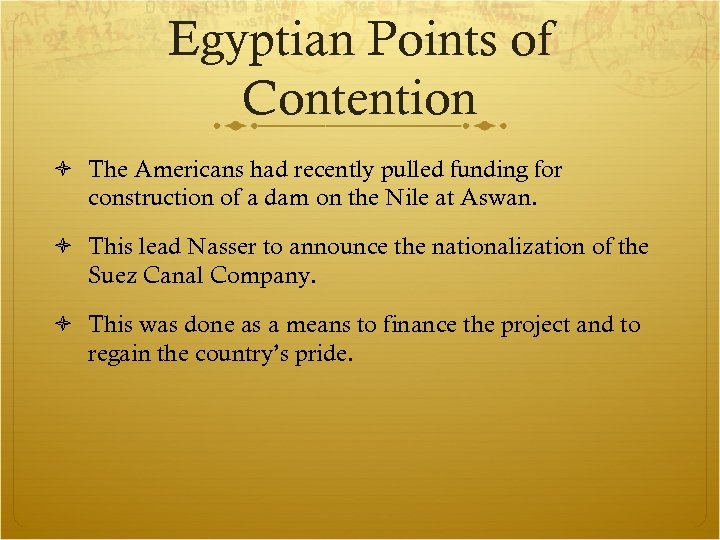 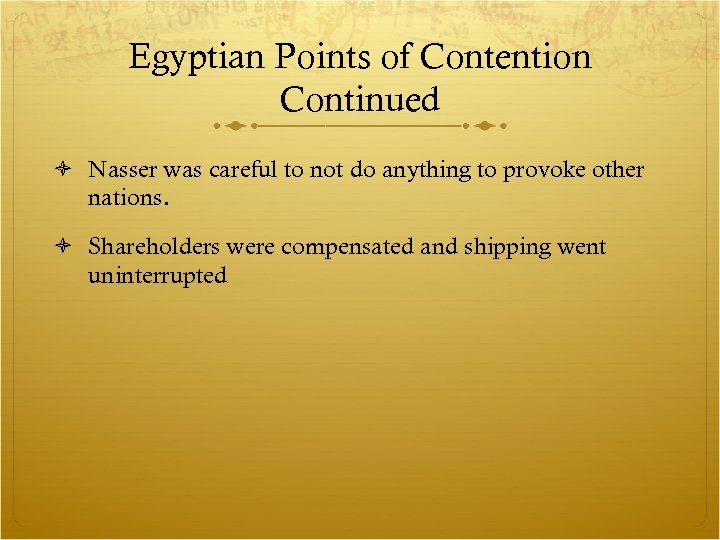 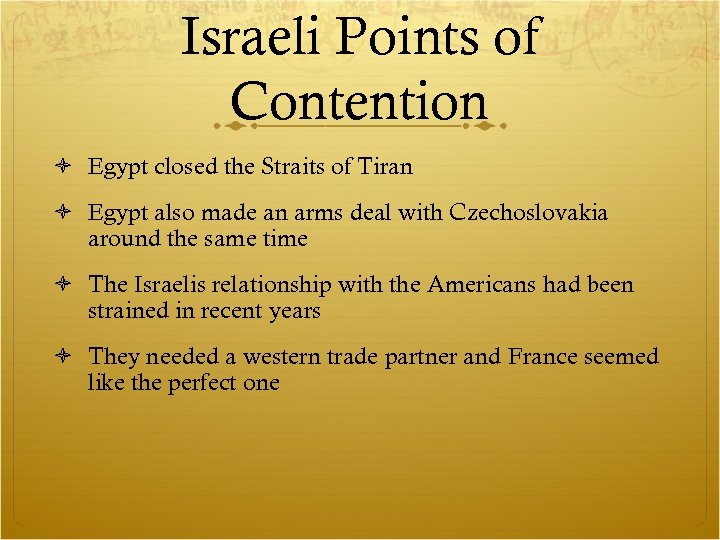 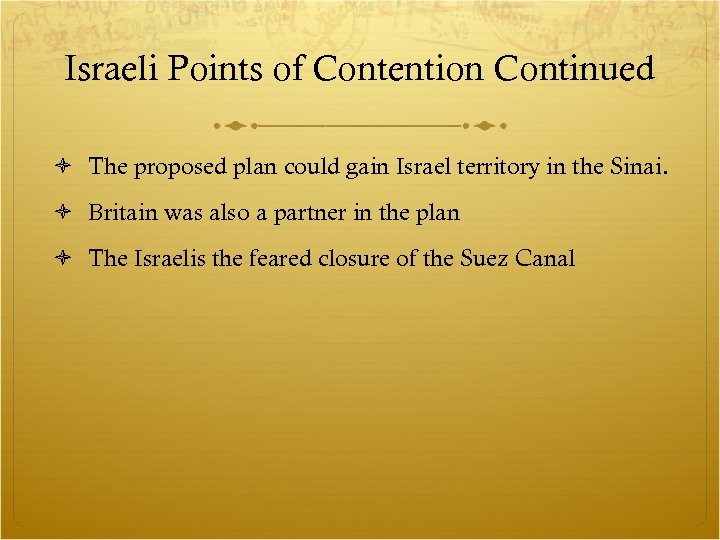 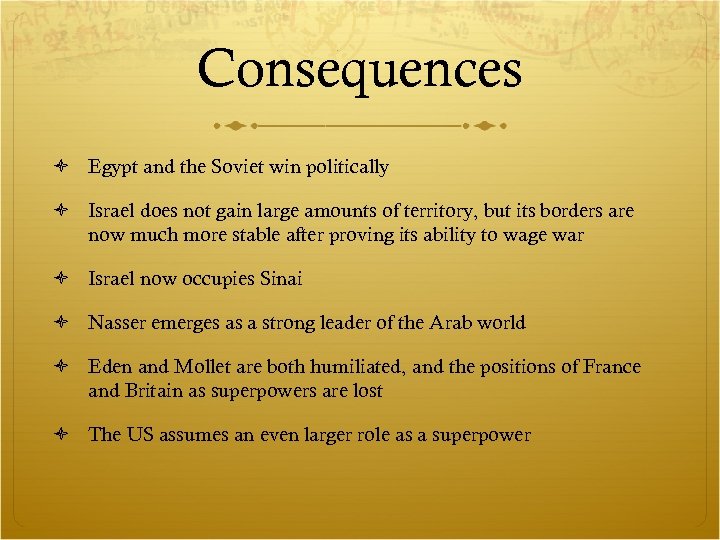 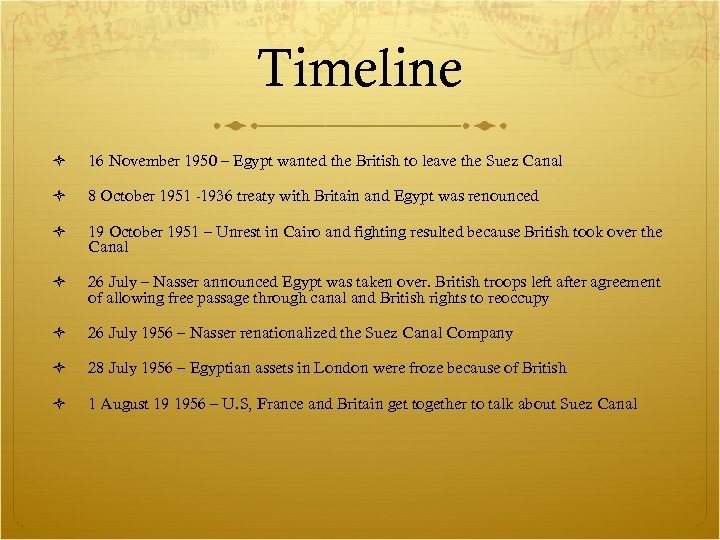 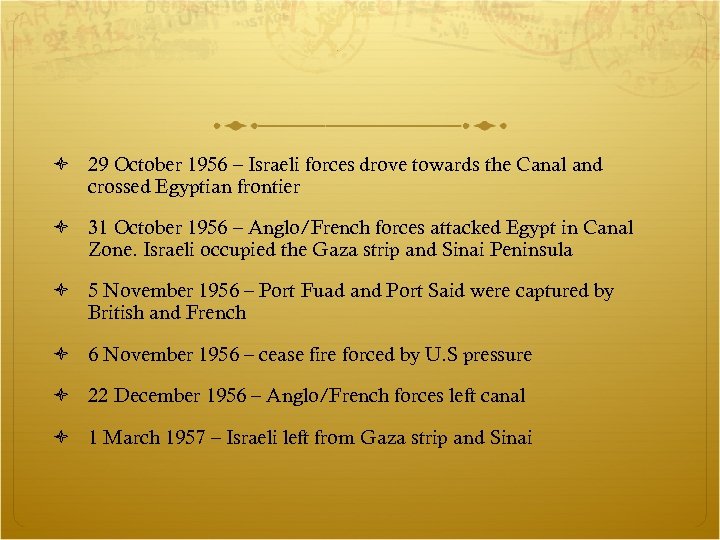 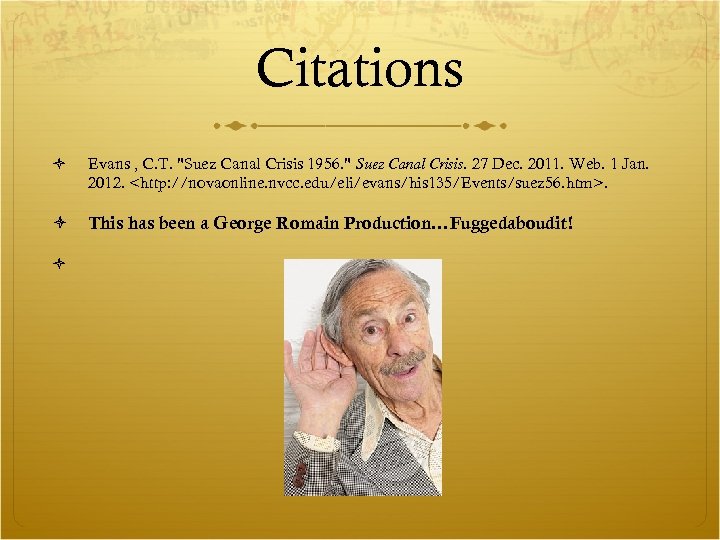 SUEZ CANAL: Key Players • MOSHE DAYAN, ISRAELI MILITARY LEADER The Defense Minister and later Foreign Minister of Israel. Joined Haganah at age 14! He commanded the Israeli forces in Sinai during the Suez Crisis • DWIGHT EISENHOWER, US PRESIDENT 34 th President of the USA. Ben-Gurion found it difficult to count on the political leverage they had in the Truman administration. Eisenhower considered himself immune to Jewish lobbying. Forced an end to the invasion of Egypt in response to Suez Canal after which the United States adopted the “Eisenhower doctrine. ” • GUY MOLLET, FRENCH PRIME MINISTER A French Socialist Politian, he was the Prime Minister in 1956 -57. Due to fear of Egyptian nationalism and oil being cut off to Europe the French joined with Israel to secretly attack Egypt in the northern Suez Canal area.

SUEZ CANAL: Key Players continued • ANTHONY EDEN, BRITISH PRIME MINISTER British conservative Prime Minister in 1955 -57. Also feared Nasser was planning on cutting off oil to Europe and wanted him completely removed from Egyptian office. Viewed Nasser as an aggressive nationalist. • GAMAL ABDEL NASSER Second Egyptian president, led the Egyptian revolution of 1952. He nationalized the Suez Canal. He closed the Straits of Tiran and blockaded the Gulf of Aqaba from Israeli usage, a violation of 1949 Armistice Agreements. He underestimated the consequences that it would cause. • NIKITA KHRUSHCHEV Chairman of the Council of Ministers of the Soviet Union from 1958 to 1964. Provided Nasser with arms.

Egyptian Points of Contention The Americans had recently pulled funding for construction of a dam on the Nile at Aswan. This lead Nasser to announce the nationalization of the Suez Canal Company. This was done as a means to finance the project and to regain the country’s pride.

Egyptian Points of Contention Continued Nasser was careful to not do anything to provoke other nations. Shareholders were compensated and shipping went uninterrupted

Israeli Points of Contention Continued The proposed plan could gain Israel territory in the Sinai. Britain was also a partner in the plan The Israelis the feared closure of the Suez Canal

Consequences Egypt and the Soviet win politically Israel does not gain large amounts of territory, but its borders are now much more stable after proving its ability to wage war Israel now occupies Sinai Nasser emerges as a strong leader of the Arab world Eden and Mollet are both humiliated, and the positions of France and Britain as superpowers are lost The US assumes an even larger role as a superpower

Timeline 16 November 1950 – Egypt wanted the British to leave the Suez Canal 8 October 1951 -1936 treaty with Britain and Egypt was renounced 19 October 1951 – Unrest in Cairo and fighting resulted because British took over the Canal 26 July – Nasser announced Egypt was taken over. British troops left after agreement of allowing free passage through canal and British rights to reoccupy 26 July 1956 – Nasser renationalized the Suez Canal Company 28 July 1956 – Egyptian assets in London were froze because of British 1 August 19 1956 – U. S, France and Britain get together to talk about Suez Canal