Submissions on the CSP Report Implementation of the 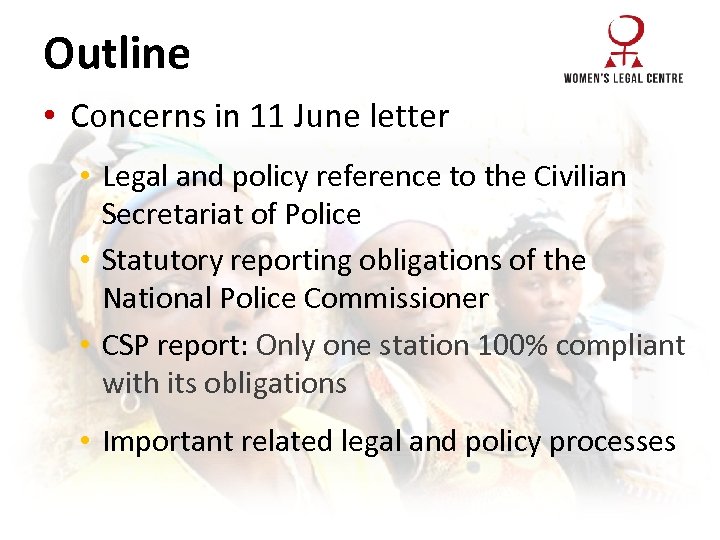 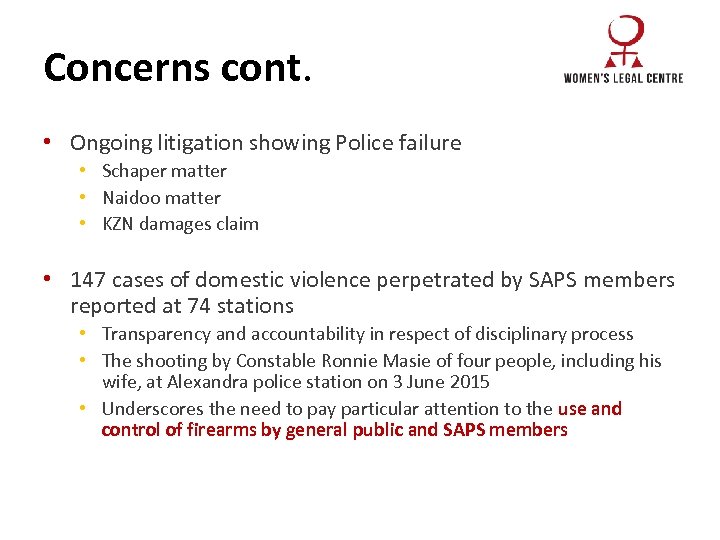 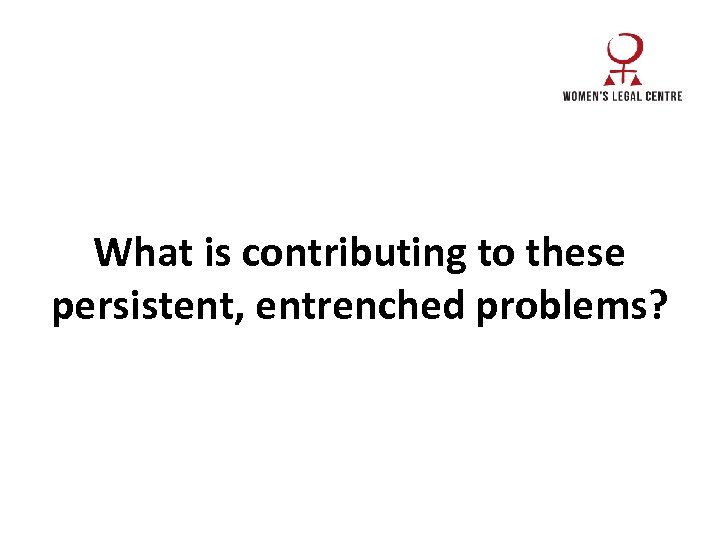 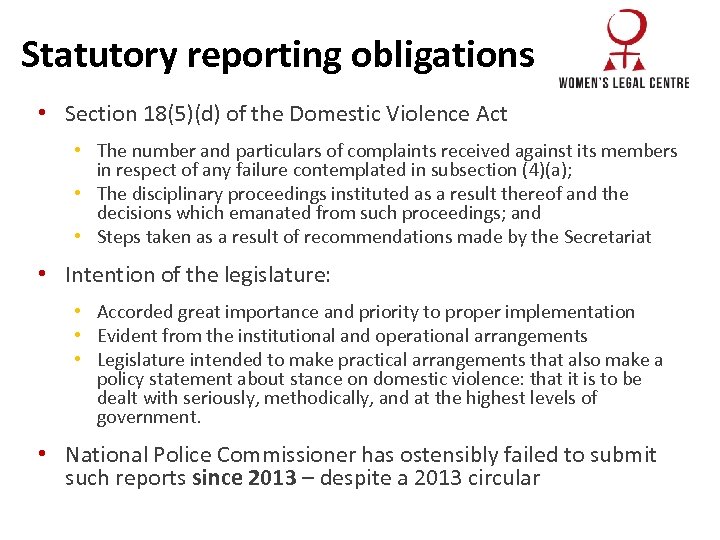 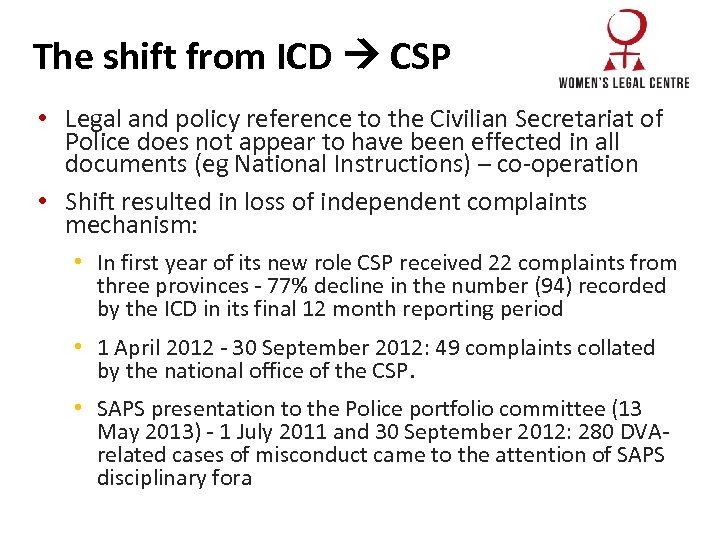 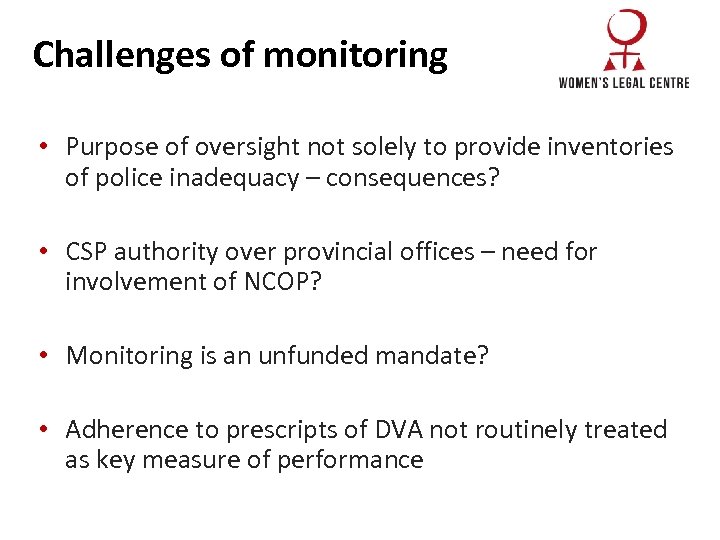 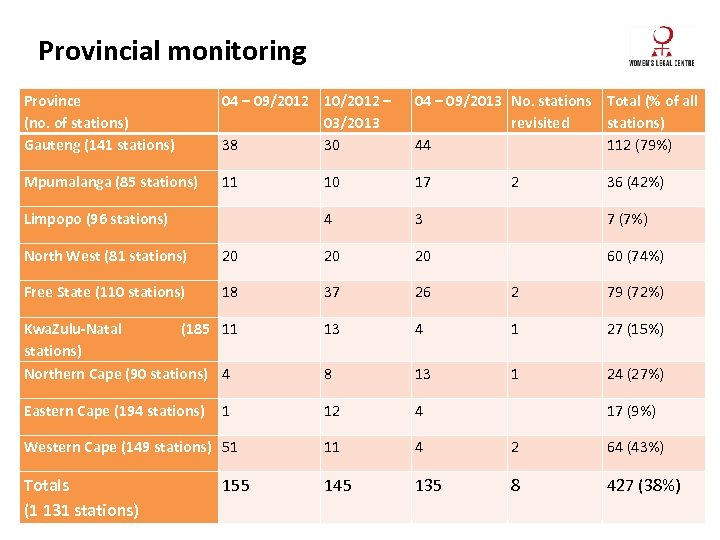 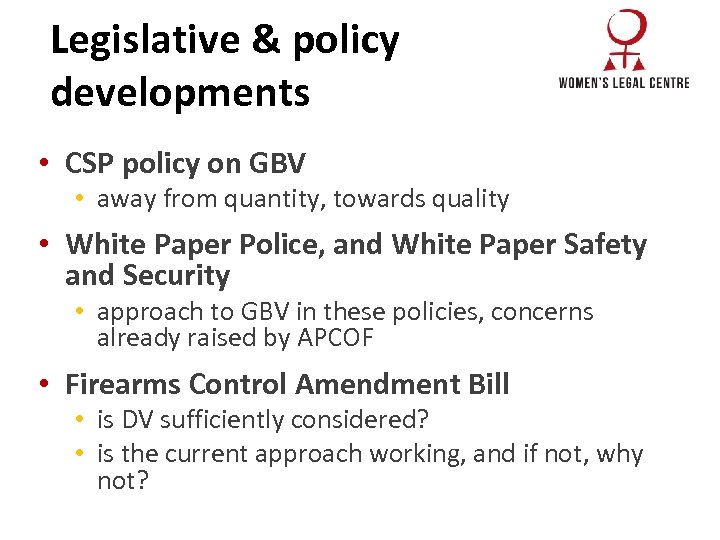 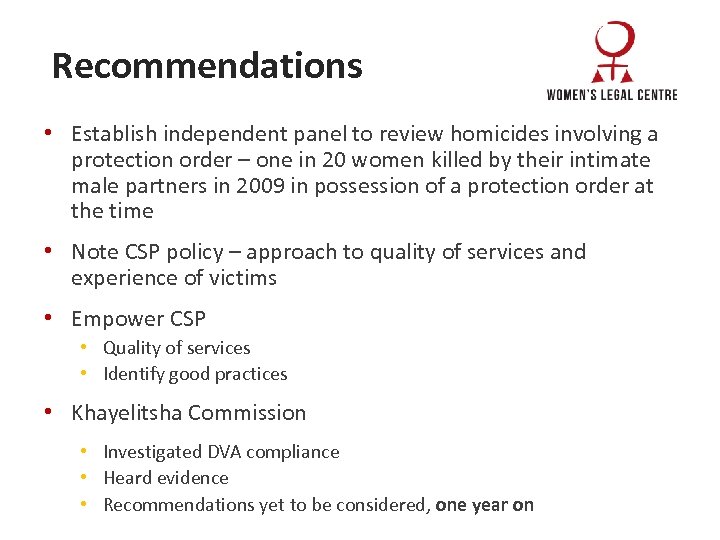 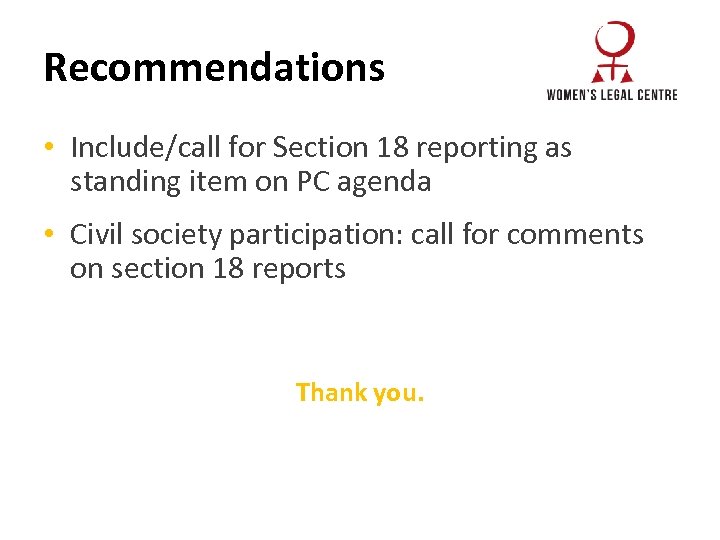 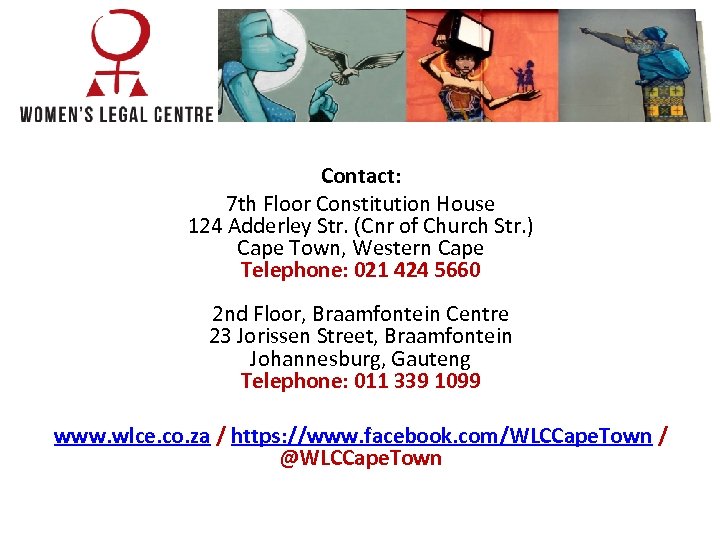 Скачать презентацию Submissions on the CSP Report Implementation of the

Submissions on the CSP Report: Implementation of the DVA of 1998 Lisa Vetten Sanja Bornman 12 August 2015

Outline • Concerns in 11 June letter • Legal and policy reference to the Civilian Secretariat of Police • Statutory reporting obligations of the National Police Commissioner • CSP report: Only one station 100% compliant with its obligations • Important related legal and policy processes

Concerns cont. • Ongoing litigation showing Police failure • Schaper matter • Naidoo matter • KZN damages claim • 147 cases of domestic violence perpetrated by SAPS members reported at 74 stations • Transparency and accountability in respect of disciplinary process • The shooting by Constable Ronnie Masie of four people, including his wife, at Alexandra police station on 3 June 2015 • Underscores the need to pay particular attention to the use and control of firearms by general public and SAPS members

What is contributing to these persistent, entrenched problems?

Statutory reporting obligations • Section 18(5)(d) of the Domestic Violence Act • The number and particulars of complaints received against its members in respect of any failure contemplated in subsection (4)(a); • The disciplinary proceedings instituted as a result thereof and the decisions which emanated from such proceedings; and • Steps taken as a result of recommendations made by the Secretariat • Intention of the legislature: • Accorded great importance and priority to proper implementation • Evident from the institutional and operational arrangements • Legislature intended to make practical arrangements that also make a policy statement about stance on domestic violence: that it is to be dealt with seriously, methodically, and at the highest levels of government. • National Police Commissioner has ostensibly failed to submit such reports since 2013 – despite a 2013 circular

The shift from ICD CSP • Legal and policy reference to the Civilian Secretariat of Police does not appear to have been effected in all documents (eg National Instructions) – co-operation • Shift resulted in loss of independent complaints mechanism: • In first year of its new role CSP received 22 complaints from three provinces - 77% decline in the number (94) recorded by the ICD in its final 12 month reporting period • 1 April 2012 - 30 September 2012: 49 complaints collated by the national office of the CSP. • SAPS presentation to the Police portfolio committee (13 May 2013) - 1 July 2011 and 30 September 2012: 280 DVArelated cases of misconduct came to the attention of SAPS disciplinary fora

Challenges of monitoring • Purpose of oversight not solely to provide inventories of police inadequacy – consequences? • CSP authority over provincial offices – need for involvement of NCOP? • Monitoring is an unfunded mandate? • Adherence to prescripts of DVA not routinely treated as key measure of performance

Legislative & policy developments • CSP policy on GBV • away from quantity, towards quality • White Paper Police, and White Paper Safety and Security • approach to GBV in these policies, concerns already raised by APCOF • Firearms Control Amendment Bill • is DV sufficiently considered? • is the current approach working, and if not, why not?

Recommendations • Establish independent panel to review homicides involving a protection order – one in 20 women killed by their intimate male partners in 2009 in possession of a protection order at the time • Note CSP policy – approach to quality of services and experience of victims • Empower CSP • Quality of services • Identify good practices • Khayelitsha Commission • Investigated DVA compliance • Heard evidence • Recommendations yet to be considered, one year on