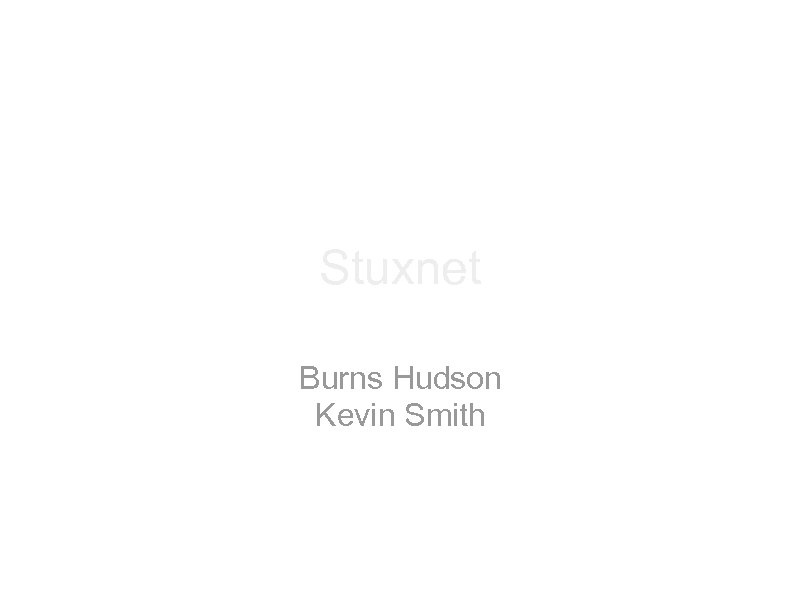 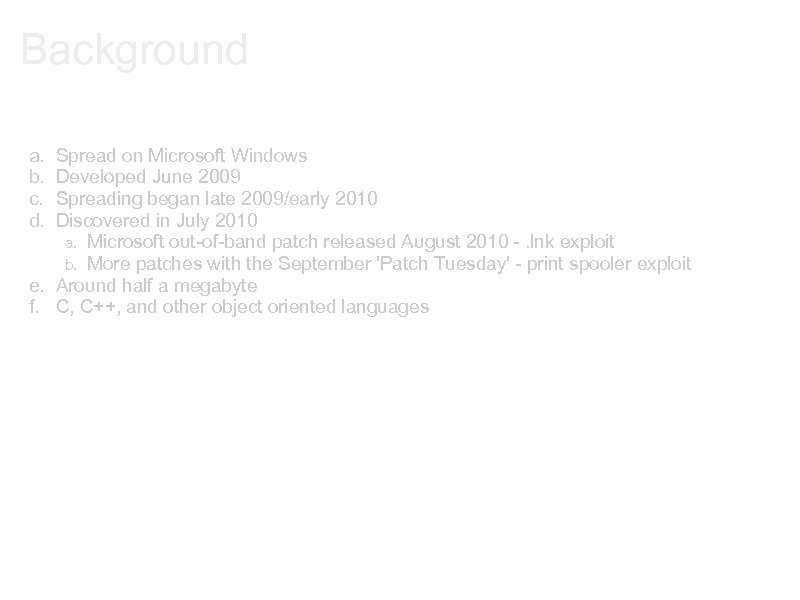 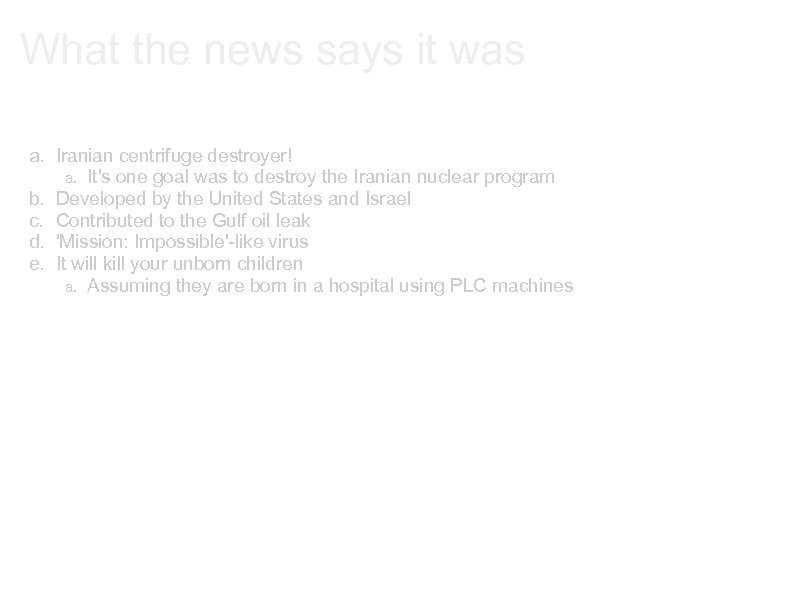 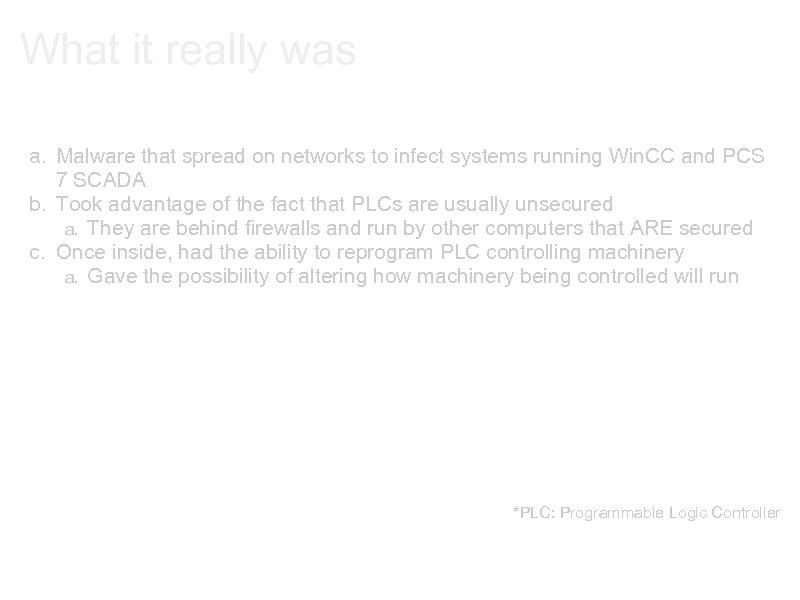 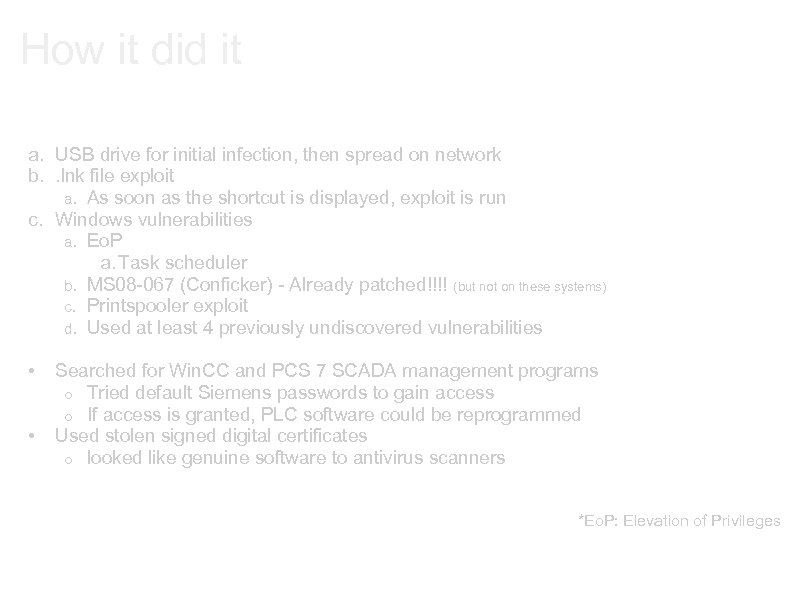 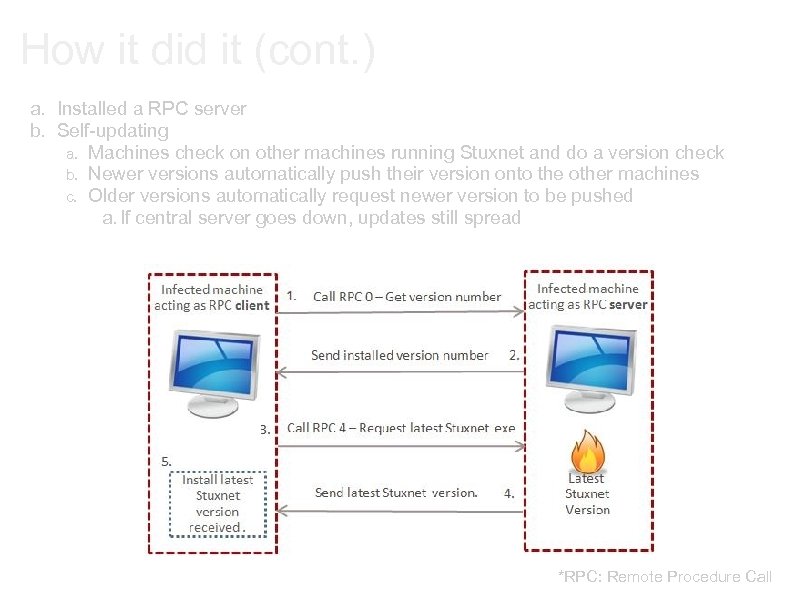 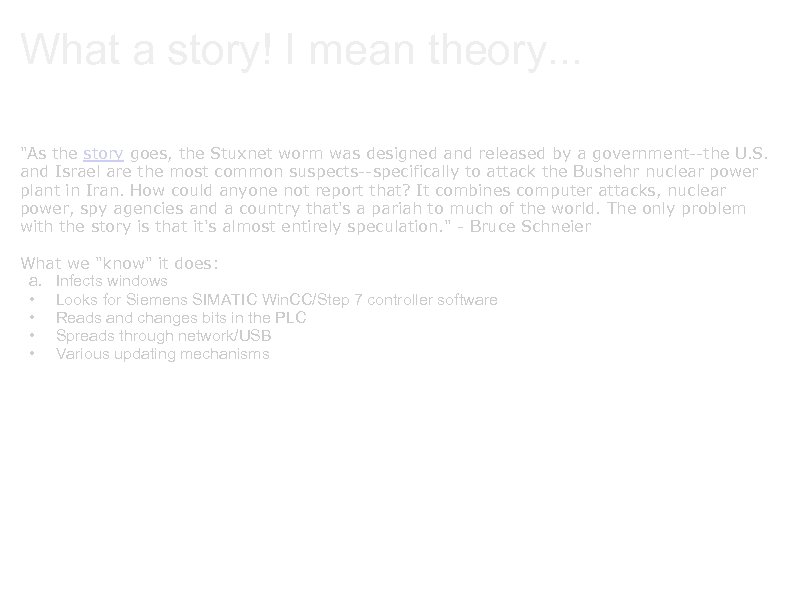 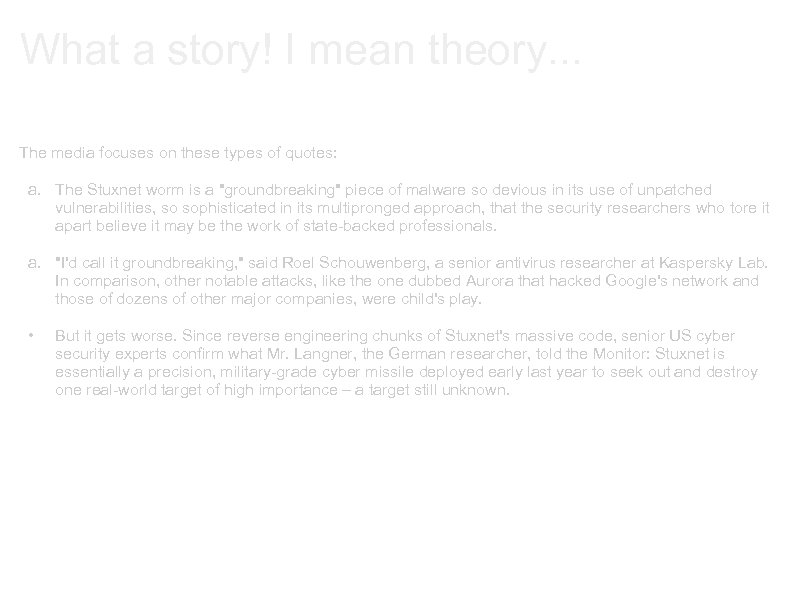 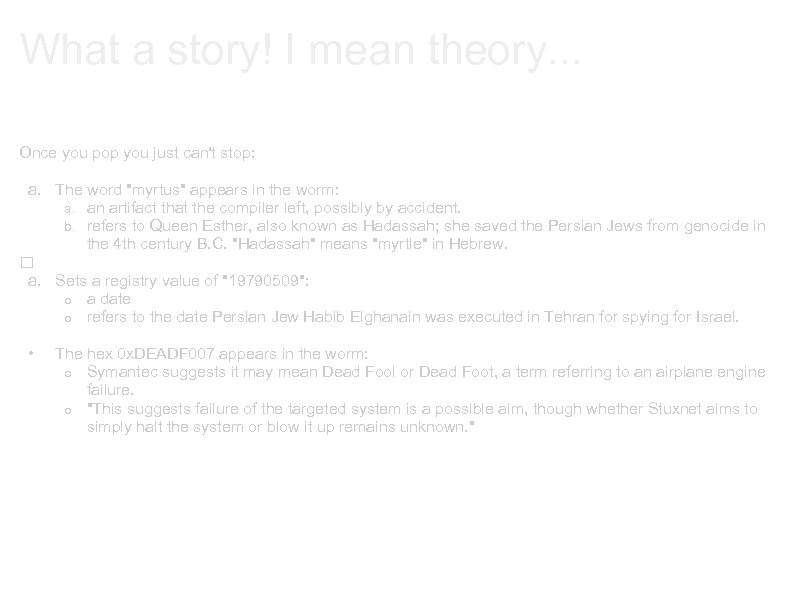 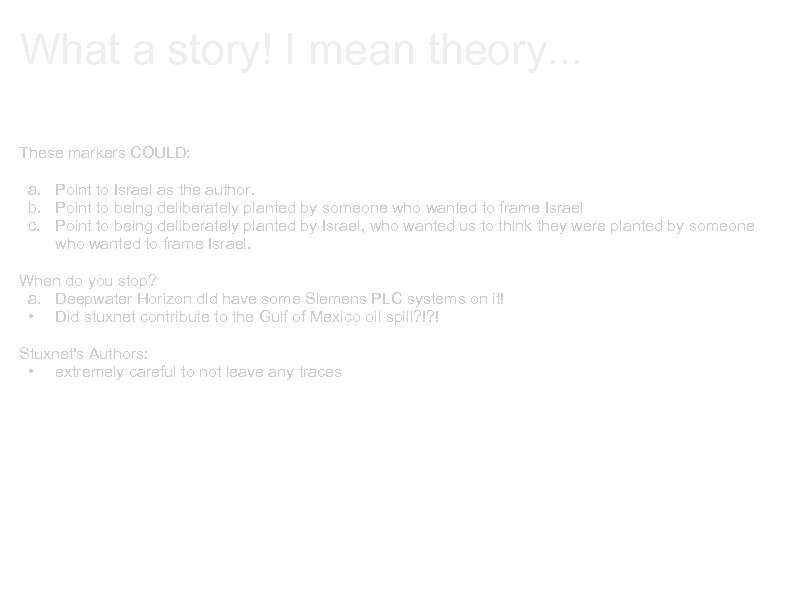 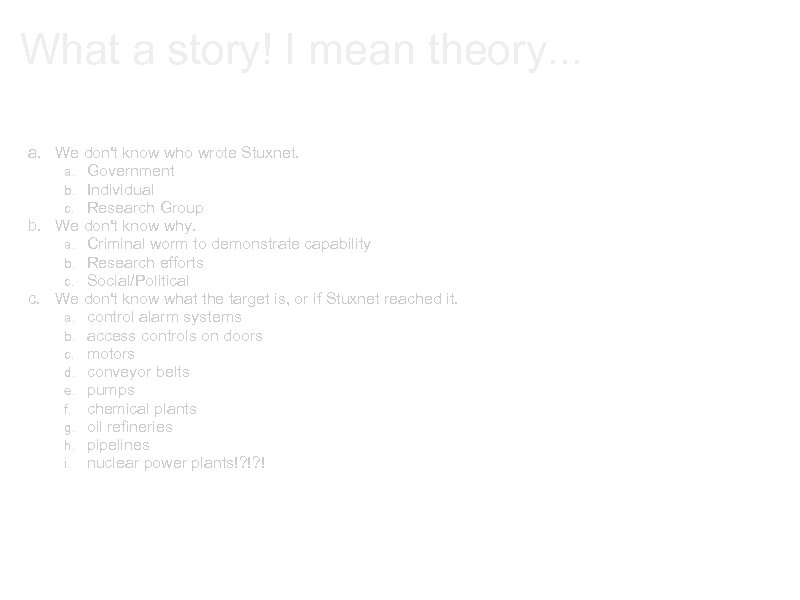 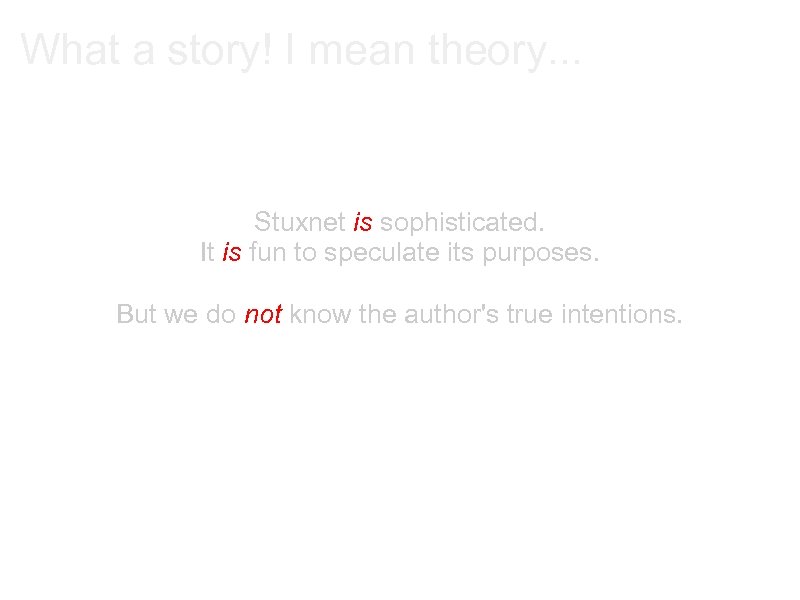 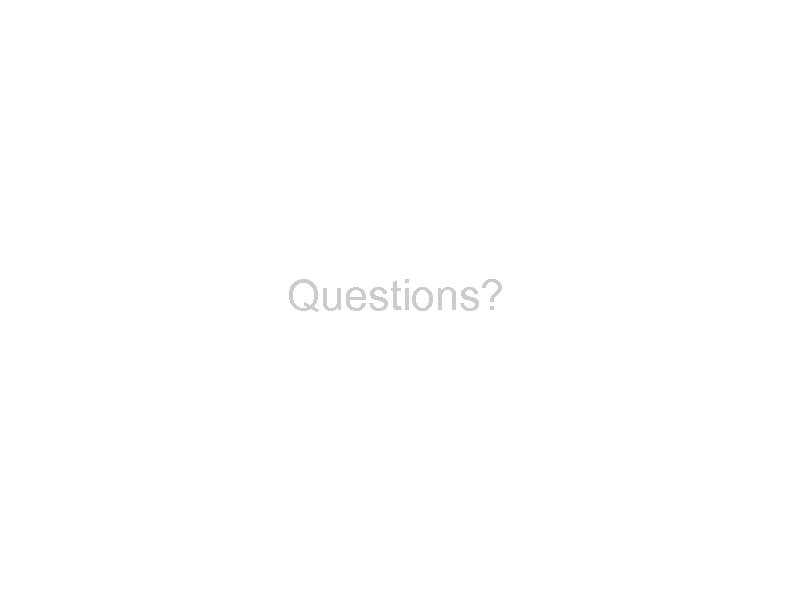 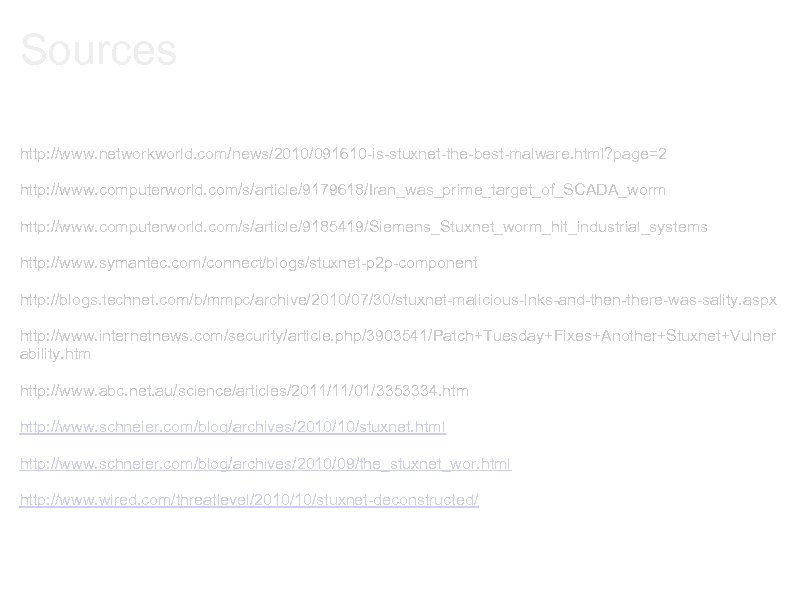 What the news says it was a. Iranian centrifuge destroyer! a. It's one goal was to destroy the Iranian nuclear program b. Developed by the United States and Israel c. Contributed to the Gulf oil leak d. 'Mission: Impossible'-like virus e. It will kill your unborn children a. Assuming they are born in a hospital using PLC machines

What it really was a. Malware that spread on networks to infect systems running Win. CC and PCS 7 SCADA b. Took advantage of the fact that PLCs are usually unsecured a. They are behind firewalls and run by other computers that ARE secured c. Once inside, had the ability to reprogram PLC controlling machinery a. Gave the possibility of altering how machinery being controlled will run *PLC: Programmable Logic Controller

How it did it a. USB drive for initial infection, then spread on network b. . lnk file exploit a. As soon as the shortcut is displayed, exploit is run c. Windows vulnerabilities a. Eo. P a. Task scheduler b. MS 08 -067 (Conficker) - Already patched!!!! (but not on these systems) c. Printspooler exploit d. Used at least 4 previously undiscovered vulnerabilities • Searched for Win. CC and PCS 7 SCADA management programs o Tried default Siemens passwords to gain access o If access is granted, PLC software could be reprogrammed • Used stolen signed digital certificates o looked like genuine software to antivirus scanners *Eo. P: Elevation of Privileges

What a story! I mean theory. . . "As the story goes, the Stuxnet worm was designed and released by a government--the U. S. and Israel are the most common suspects--specifically to attack the Bushehr nuclear power plant in Iran. How could anyone not report that? It combines computer attacks, nuclear power, spy agencies and a country that's a pariah to much of the world. The only problem with the story is that it's almost entirely speculation. " - Bruce Schneier What we "know" it does: a. Infects windows • Looks for Siemens SIMATIC Win. CC/Step 7 controller software • Reads and changes bits in the PLC • Spreads through network/USB • Various updating mechanisms

What a story! I mean theory. . . The media focuses on these types of quotes: a. The Stuxnet worm is a "groundbreaking" piece of malware so devious in its use of unpatched vulnerabilities, so sophisticated in its multipronged approach, that the security researchers who tore it apart believe it may be the work of state-backed professionals. a. "I'd call it groundbreaking, " said Roel Schouwenberg, a senior antivirus researcher at Kaspersky Lab. In comparison, other notable attacks, like the one dubbed Aurora that hacked Google's network and those of dozens of other major companies, were child's play. • But it gets worse. Since reverse engineering chunks of Stuxnet's massive code, senior US cyber security experts confirm what Mr. Langner, the German researcher, told the Monitor: Stuxnet is essentially a precision, military-grade cyber missile deployed early last year to seek out and destroy one real-world target of high importance – a target still unknown.

What a story! I mean theory. . . Once you pop you just can't stop: a. The word "myrtus" appears in the worm: a. an artifact that the compiler left, possibly by accident. b. refers to Queen Esther, also known as Hadassah; she saved the Persian Jews from genocide in the 4 th century B. C. "Hadassah" means "myrtle" in Hebrew. a. Sets a registry value of "19790509": o a date o refers to the date Persian Jew Habib Elghanain was executed in Tehran for spying for Israel. • The hex 0 x. DEADF 007 appears in the worm: o Symantec suggests it may mean Dead Fool or Dead Foot, a term referring to an airplane engine failure. o "This suggests failure of the targeted system is a possible aim, though whether Stuxnet aims to simply halt the system or blow it up remains unknown. "

What a story! I mean theory. . . a. We don't know who wrote Stuxnet. a. Government b. Individual c. Research Group b. We don't know why. a. Criminal worm to demonstrate capability b. Research efforts c. Social/Political c. We don't know what the target is, or if Stuxnet reached it. a. control alarm systems b. access controls on doors c. motors d. conveyor belts e. pumps f. chemical plants g. oil refineries h. pipelines i. nuclear power plants!? !? !

What a story! I mean theory. . . Stuxnet is sophisticated. It is fun to speculate its purposes. But we do not know the author's true intentions.