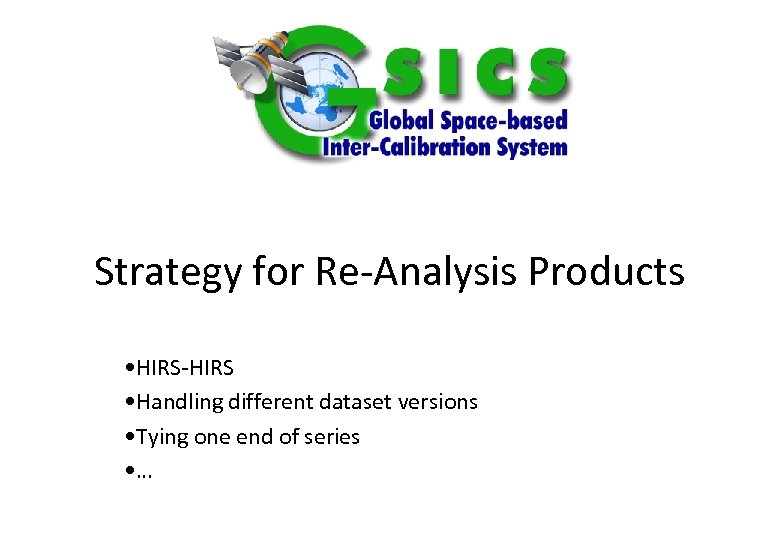 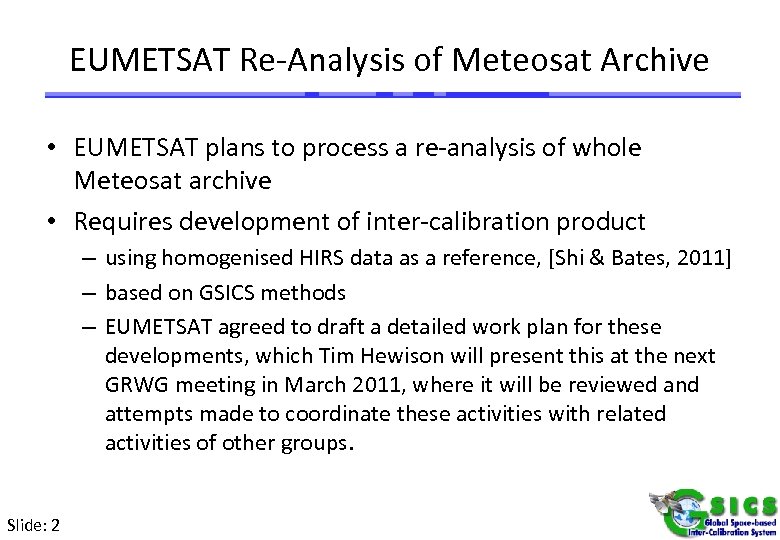 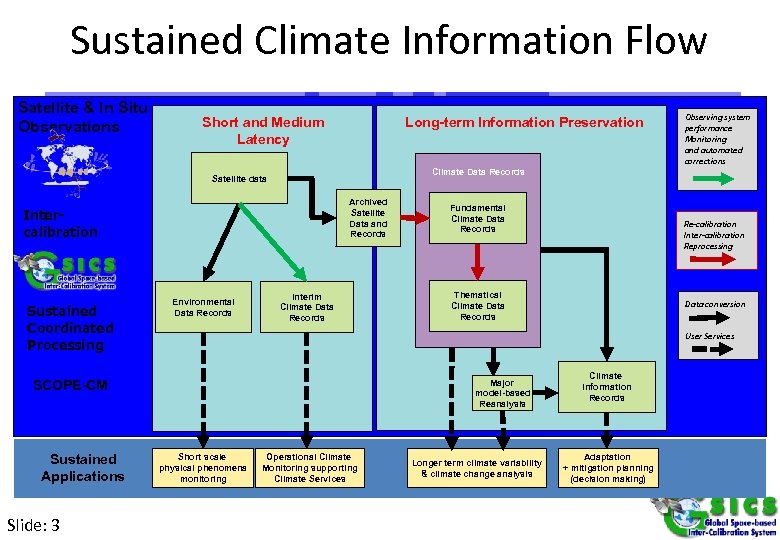 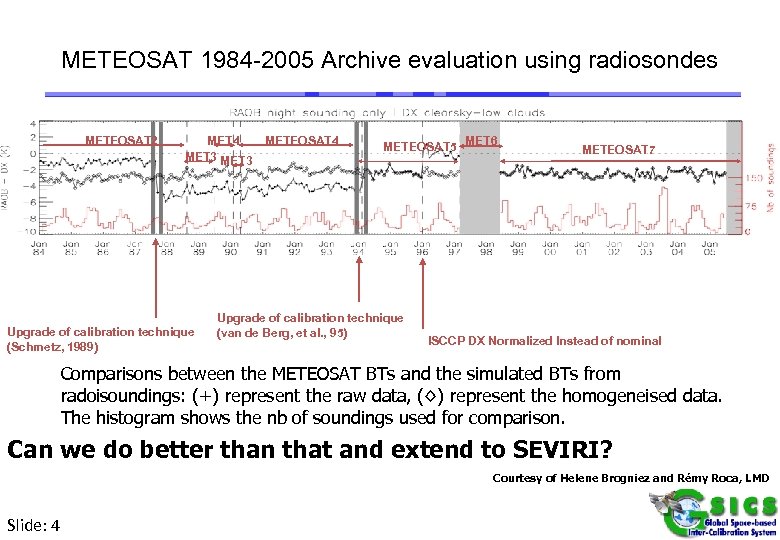 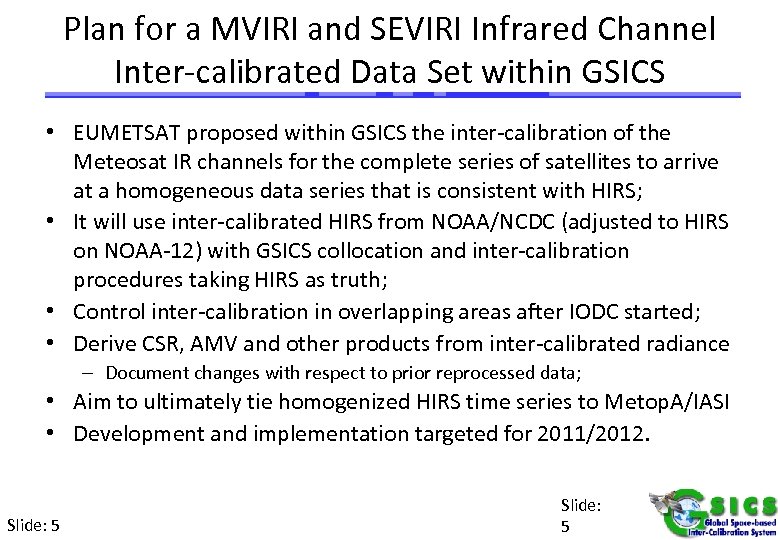 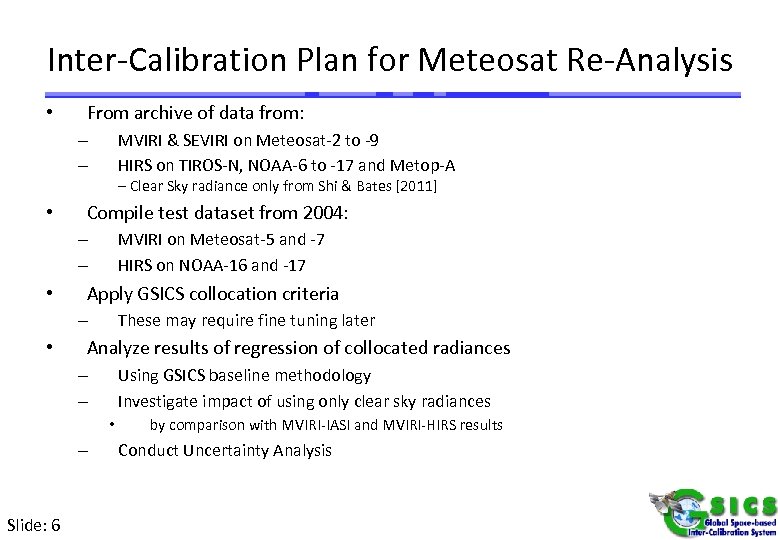 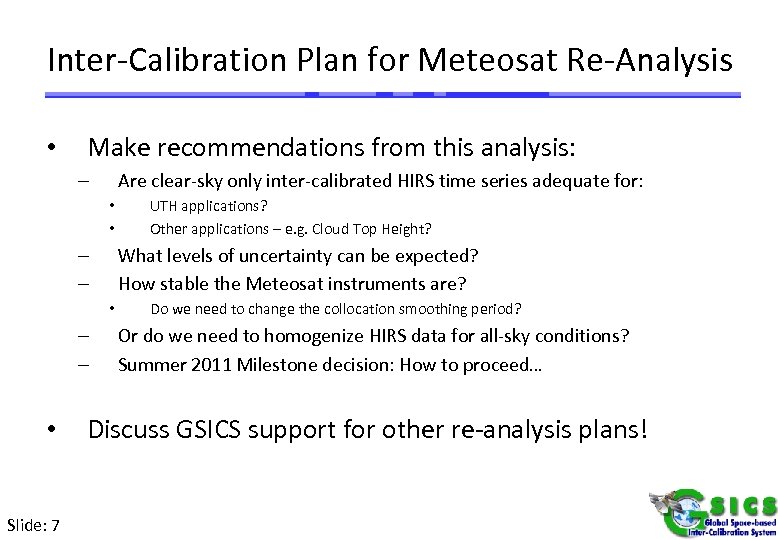 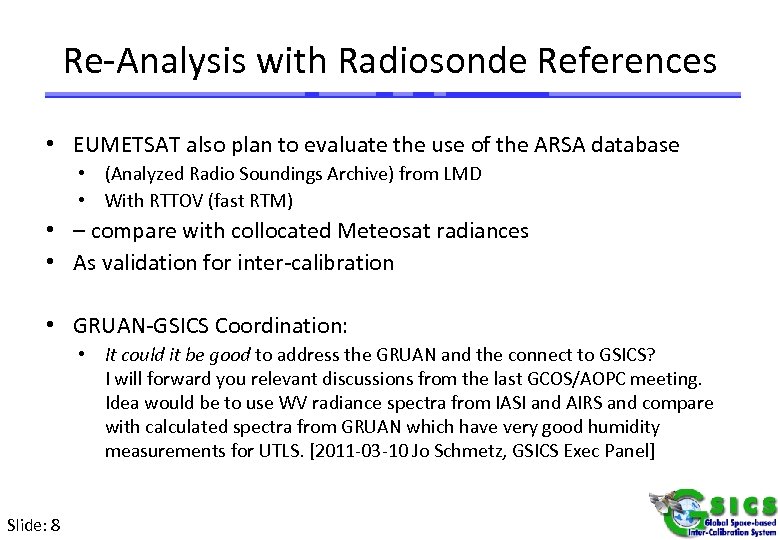 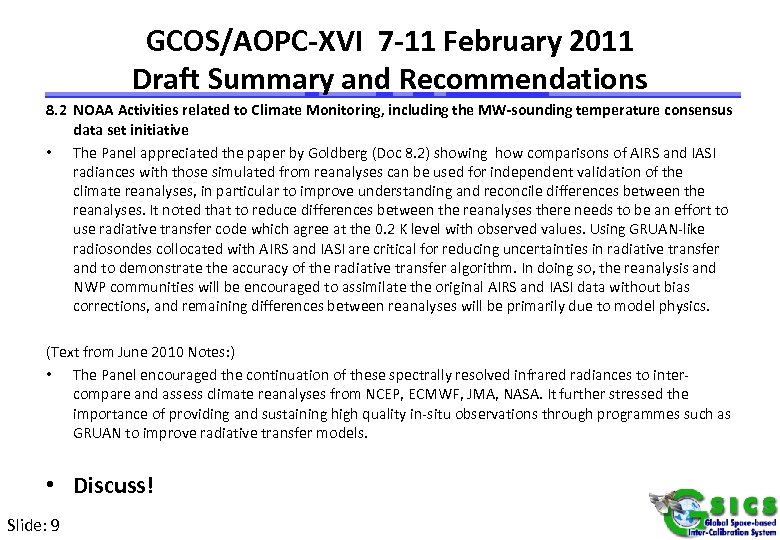 EUMETSAT Re-Analysis of Meteosat Archive • EUMETSAT plans to process a re-analysis of whole Meteosat archive • Requires development of inter-calibration product – using homogenised HIRS data as a reference, [Shi & Bates, 2011] – based on GSICS methods – EUMETSAT agreed to draft a detailed work plan for these developments, which Tim Hewison will present this at the next GRWG meeting in March 2011, where it will be reviewed and attempts made to coordinate these activities with related activities of other groups. Slide: 2

Plan for a MVIRI and SEVIRI Infrared Channel Inter-calibrated Data Set within GSICS • EUMETSAT proposed within GSICS the inter-calibration of the Meteosat IR channels for the complete series of satellites to arrive at a homogeneous data series that is consistent with HIRS; • It will use inter-calibrated HIRS from NOAA/NCDC (adjusted to HIRS on NOAA-12) with GSICS collocation and inter-calibration procedures taking HIRS as truth; • Control inter-calibration in overlapping areas after IODC started; • Derive CSR, AMV and other products from inter-calibrated radiance – Document changes with respect to prior reprocessed data; • Aim to ultimately tie homogenized HIRS time series to Metop. A/IASI • Development and implementation targeted for 2011/2012. Slide: 5

Inter-Calibration Plan for Meteosat Re-Analysis • From archive of data from: MVIRI & SEVIRI on Meteosat-2 to -9 HIRS on TIROS-N, NOAA-6 to -17 and Metop-A – – – Clear Sky radiance only from Shi & Bates [2011] • Compile test dataset from 2004: MVIRI on Meteosat-5 and -7 HIRS on NOAA-16 and -17 – – • Apply GSICS collocation criteria These may require fine tuning later – • Analyze results of regression of collocated radiances Using GSICS baseline methodology Investigate impact of using only clear sky radiances – – • – Slide: 6 by comparison with MVIRI-IASI and MVIRI-HIRS results Conduct Uncertainty Analysis

Inter-Calibration Plan for Meteosat Re-Analysis • Make recommendations from this analysis: Are clear-sky only inter-calibrated HIRS time series adequate for: – • • What levels of uncertainty can be expected? How stable the Meteosat instruments are? – – • – – • Slide: 7 UTH applications? Other applications – e. g. Cloud Top Height? Do we need to change the collocation smoothing period? Or do we need to homogenize HIRS data for all-sky conditions? Summer 2011 Milestone decision: How to proceed… Discuss GSICS support for other re-analysis plans!

Re-Analysis with Radiosonde References • EUMETSAT also plan to evaluate the use of the ARSA database • (Analyzed Radio Soundings Archive) from LMD • With RTTOV (fast RTM) • – compare with collocated Meteosat radiances • As validation for inter-calibration • GRUAN-GSICS Coordination: • It could it be good to address the GRUAN and the connect to GSICS? I will forward you relevant discussions from the last GCOS/AOPC meeting. Idea would be to use WV radiance spectra from IASI and AIRS and compare with calculated spectra from GRUAN which have very good humidity measurements for UTLS. [2011 -03 -10 Jo Schmetz, GSICS Exec Panel] Slide: 8

GCOS/AOPC-XVI 7 -11 February 2011 Draft Summary and Recommendations 8. 2 NOAA Activities related to Climate Monitoring, including the MW-sounding temperature consensus data set initiative • The Panel appreciated the paper by Goldberg (Doc 8. 2) showing how comparisons of AIRS and IASI radiances with those simulated from reanalyses can be used for independent validation of the climate reanalyses, in particular to improve understanding and reconcile differences between the reanalyses. It noted that to reduce differences between the reanalyses there needs to be an effort to use radiative transfer code which agree at the 0. 2 K level with observed values. Using GRUAN-like radiosondes collocated with AIRS and IASI are critical for reducing uncertainties in radiative transfer and to demonstrate the accuracy of the radiative transfer algorithm. In doing so, the reanalysis and NWP communities will be encouraged to assimilate the original AIRS and IASI data without bias corrections, and remaining differences between reanalyses will be primarily due to model physics. (Text from June 2010 Notes: ) • The Panel encouraged the continuation of these spectrally resolved infrared radiances to intercompare and assess climate reanalyses from NCEP, ECMWF, JMA, NASA. It further stressed the importance of providing and sustaining high quality in-situ observations through programmes such as GRUAN to improve radiative transfer models. • Discuss! Slide: 9