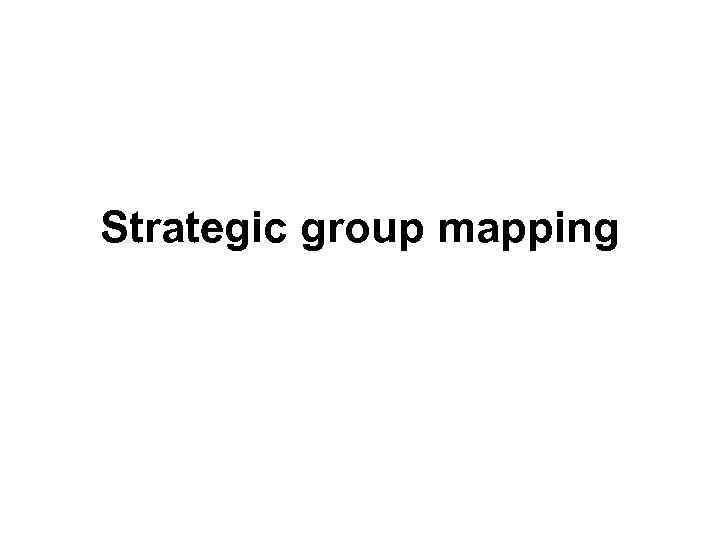 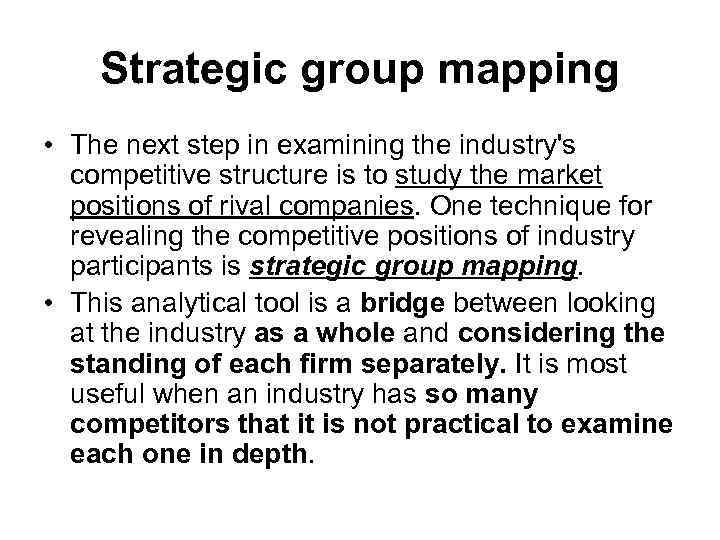 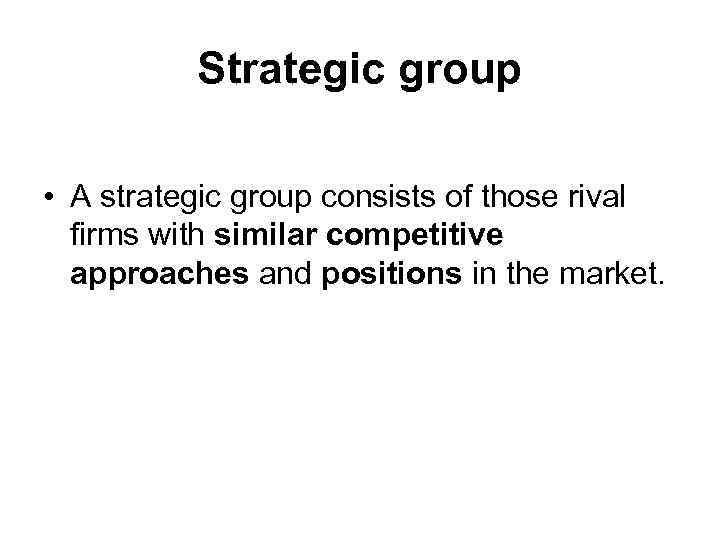 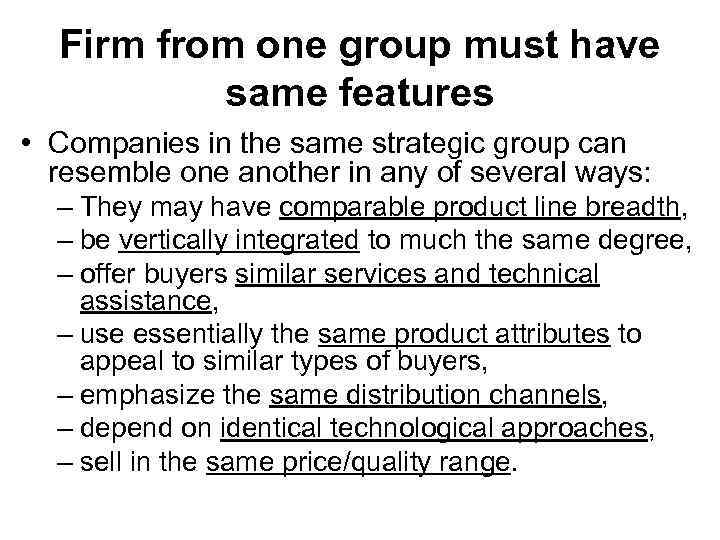 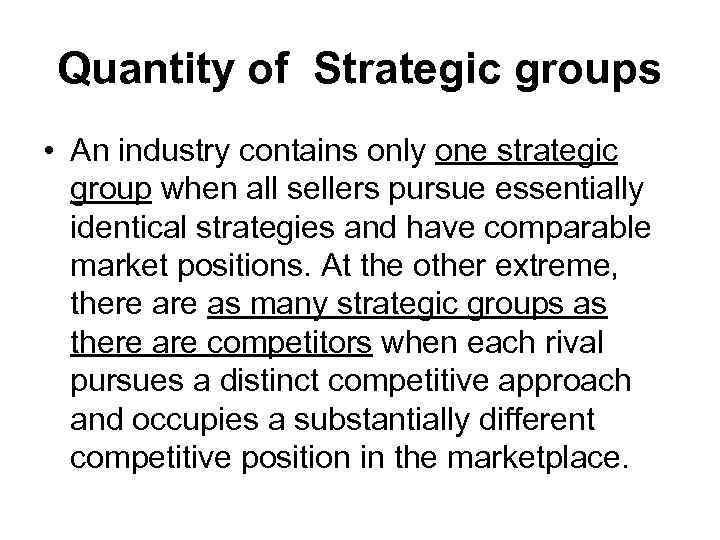 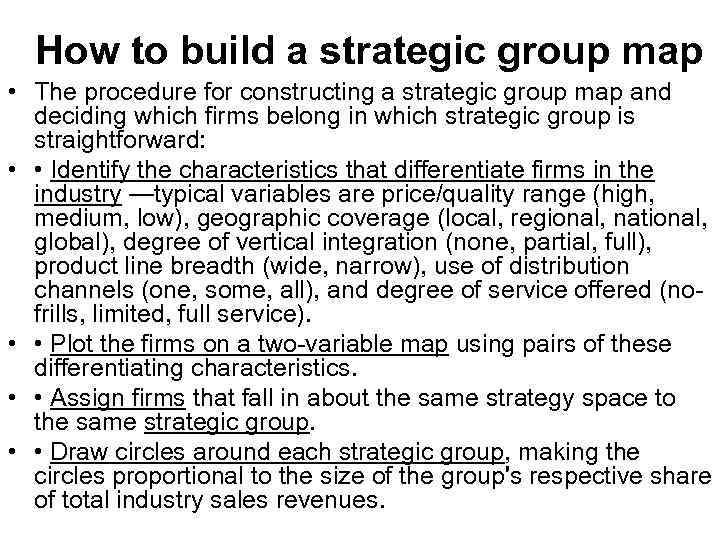 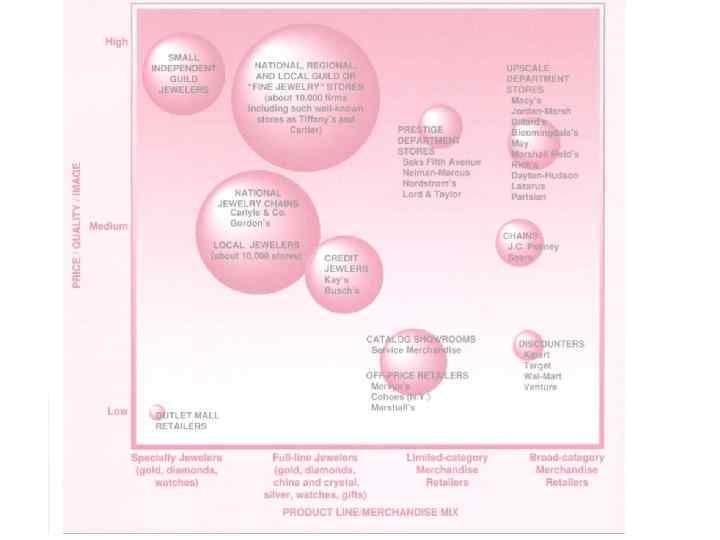 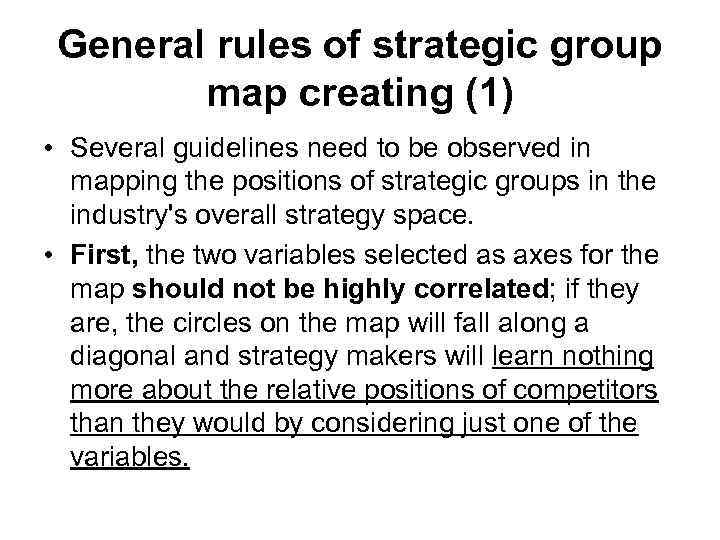 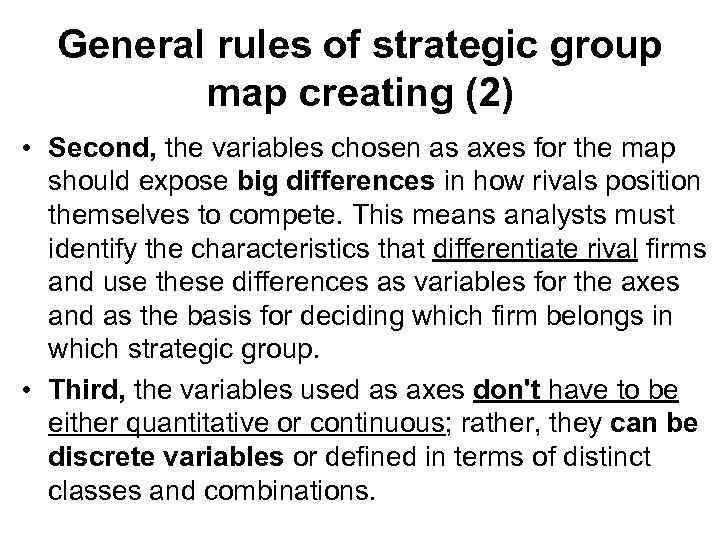 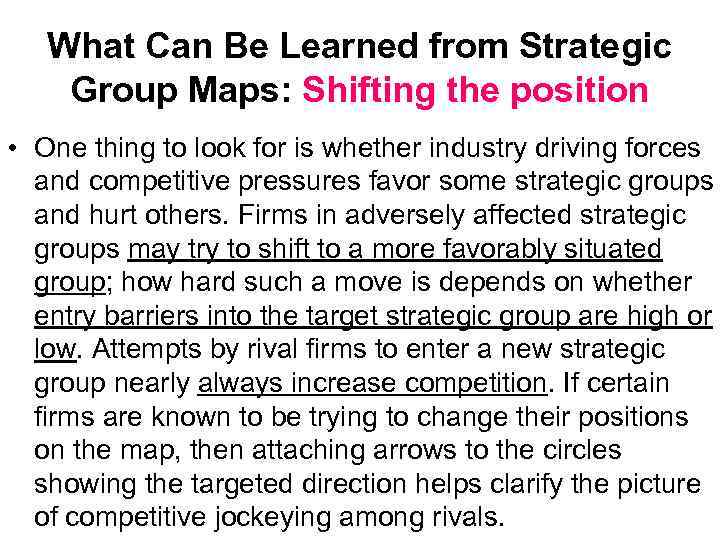 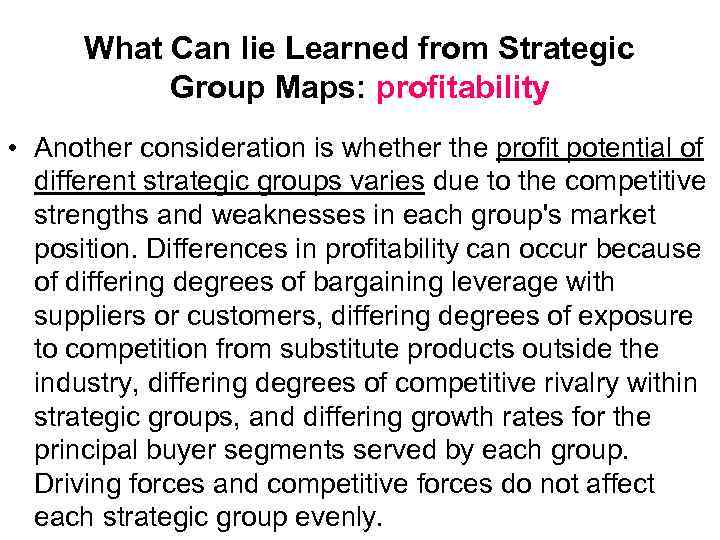 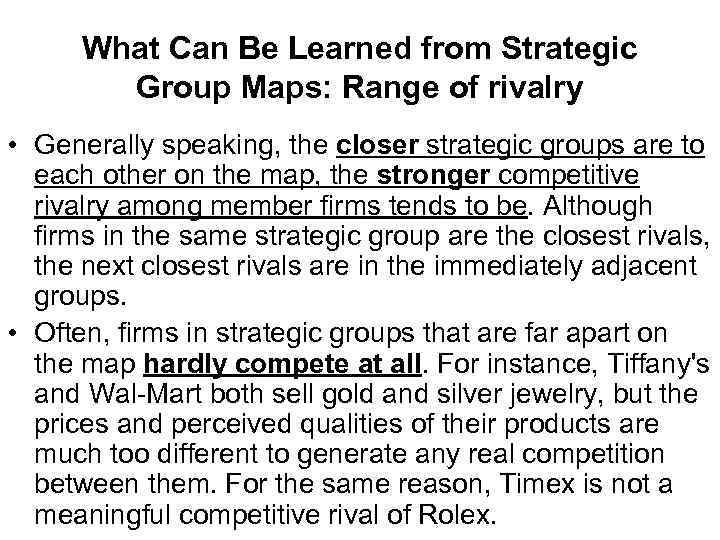 Strategic group mapping • The next step in examining the industry's competitive structure is to study the market positions of rival companies. One technique for revealing the competitive positions of industry participants is strategic group mapping. • This analytical tool is a bridge between looking at the industry as a whole and considering the standing of each firm separately. It is most useful when an industry has so many competitors that it is not practical to examine each one in depth.

Strategic group • A strategic group consists of those rival firms with similar competitive approaches and positions in the market.

Firm from one group must have same features • Companies in the same strategic group can resemble one another in any of several ways: – They may have comparable product line breadth, – be vertically integrated to much the same degree, – offer buyers similar services and technical assistance, – use essentially the same product attributes to appeal to similar types of buyers, – emphasize the same distribution channels, – depend on identical technological approaches, – sell in the same price/quality range.

Quantity of Strategic groups • An industry contains only one strategic group when all sellers pursue essentially identical strategies and have comparable market positions. At the other extreme, there as many strategic groups as there are competitors when each rival pursues a distinct competitive approach and occupies a substantially different competitive position in the marketplace.

How to build a strategic group map • The procedure for constructing a strategic group map and deciding which firms belong in which strategic group is straightforward: • • Identify the characteristics that differentiate firms in the industry —typical variables are price/quality range (high, medium, low), geographic coverage (local, regional, national, global), degree of vertical integration (none, partial, full), product line breadth (wide, narrow), use of distribution channels (one, some, all), and degree of service offered (nofrills, limited, full service). • • Plot the firms on a two-variable map using pairs of these differentiating characteristics. • • Assign firms that fall in about the same strategy space to the same strategic group. • • Draw circles around each strategic group, making the circles proportional to the size of the group's respective share of total industry sales revenues.

General rules of strategic group map creating (1) • Several guidelines need to be observed in mapping the positions of strategic groups in the industry's overall strategy space. • First, the two variables selected as axes for the map should not be highly correlated; if they are, the circles on the map will fall along a diagonal and strategy makers will learn nothing more about the relative positions of competitors than they would by considering just one of the variables.

General rules of strategic group map creating (2) • Second, the variables chosen as axes for the map should expose big differences in how rivals position themselves to compete. This means analysts must identify the characteristics that differentiate rival firms and use these differences as variables for the axes and as the basis for deciding which firm belongs in which strategic group. • Third, the variables used as axes don't have to be either quantitative or continuous; rather, they can be discrete variables or defined in terms of distinct classes and combinations.

General rules of strategic group map creating (3) • Fourth, drawing the sizes of the circles on the map proportional to the combined sales of the firms in each strategic group allows the map to reflect the relative sizes of each strategic group. Fifth, if more than two good competitive variables can be used as axes for the map, several maps can be drawn to give different exposures to the competitive positioning relationships present in the industry's structure. Because there is not necessarily one best map for portraying how competing firms are positioned in the market, it is advisable to experiment with different pairs of competitive variables.

What Can Be Learned from Strategic Group Maps: Shifting the position • One thing to look for is whether industry driving forces and competitive pressures favor some strategic groups and hurt others. Firms in adversely affected strategic groups may try to shift to a more favorably situated group; how hard such a move is depends on whether entry barriers into the target strategic group are high or low. Attempts by rival firms to enter a new strategic group nearly always increase competition. If certain firms are known to be trying to change their positions on the map, then attaching arrows to the circles showing the targeted direction helps clarify the picture of competitive jockeying among rivals.

What Can Be Learned from Strategic Group Maps: Range of rivalry • Generally speaking, the closer strategic groups are to each other on the map, the stronger competitive rivalry among member firms tends to be. Although firms in the same strategic group are the closest rivals, the next closest rivals are in the immediately adjacent groups. • Often, firms in strategic groups that are far apart on the map hardly compete at all. For instance, Tiffany's and Wal-Mart both sell gold and silver jewelry, but the prices and perceived qualities of their products are much too different to generate any real competition between them. For the same reason, Timex is not a meaningful competitive rival of Rolex.

STRATEGIC MARKETING PART 2 What is Strategic